This may take a while as I need to write everything out by hand,” says Monty, co-owner of The Walled Nursery in Kent. The “cash machine” isn’t working. It would be odd if it did. Standing in the old potting shed and surrounded by the business of weighing and stock-taking, customers with trays loaded with home-grown plants are happy to wait.

Above: The Walled Nursery is one of the finest living examples of a walled garden in the land, and all 13 glasshouses are still working hard for their keep. The glasshouses are equipped with signs explaining their former role: the carnation house has been pressed into service for tender annuals; the melon house is full of terra cotta pots which will make way for melons; the vinery, replete with ancient vine, houses a tea shop with an honesty box.

Above: One of the most scenic glasshouses is the peach house which extends along a south-facing wall.

This is not a museum and does not feel like a heritage experience. The owners, Monty and Emma Davies, have cleverly sidestepped the twee by embracing the functional. Even with all the aged glasshouses, there is still room for an enormous multi-functioning polytunnel. Air circulation is good; a tractor can be driven straight down the middle.

Above: Terracotta pots find temporary refuge in the deep raised beds of the melon house.

The final head gardener on the estate, classically named Ernest Hardcastle, started work here at the beginning of the First World War and left at the end of the Second. When the Army moved out of the big house in 1945 it was sold to St Ronan’s School, and the walled garden became a market garden. This rapid re-invention as a business saved it.

Above: Espaliers waiting their turn to be renovated. The nursery, formerly known as Tongswood Gardens, was typical of many walled gardens in that its heydey was crushingly close to its demise. In 1904 the walls were heightened and more glasshouses were built. It was all supposed to last forever.

Above: A sunken water tank now filled with spring planting in the tea room. The walled garden is now owned by Monty and Emma Davies, whose predecessors bought the land from the school and put in extensive repair work. Their lives are in the garden; their home is the former gardener’s bothy within its walls. A bothy was a shared lodging used by gardeners at the bottom of the pecking order, called “garden boys” and “journeymen.”

Above: Most of the plants sold at The Walled Nursery are home-grown and all are sourced from the UK. Bustling rows of brassica seedlings like this give an impression of what the garden might have been like at its height (minus the tea room). 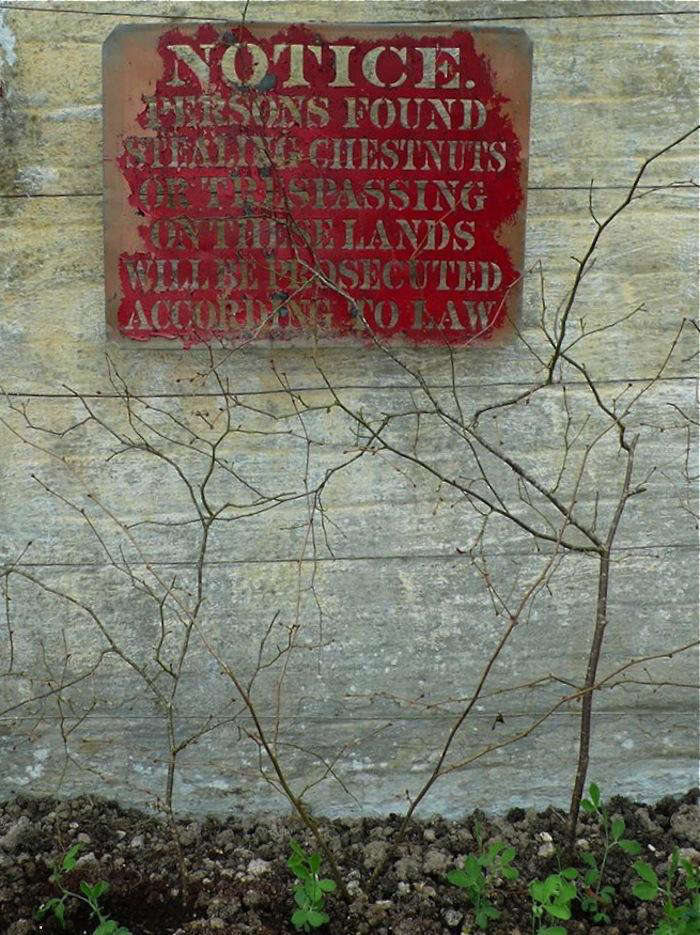 Above: Emma is an alumna of neighboring Sissinghurst and Great Dixter. Here, sweet peas will twine around pea sticks in the tea room, surrounded by relics from the garden.

Above: Neither squeaky clean nor disintegrating but possibly somewhere in between, the nursery’s profits are ploughed back into its renovation. “These structures are fragile,” says Emma. “The weather wears them down constantly.” Admirers of the nursery are invited to sponsor a pane of glass, at £10 a go.

The renovation work is endless but Emma and Monty feel undaunted. They accept that they are the custodians of a great survivor.

Love English walled gardens? see How to Restore a (Rather Large) Kitchen Garden.

DIY: Train a Wisteria Vine Not to Eat the House