Charlotte-Anne Fidler’s house in Wiltshire overlooks a valley with magical light. As a creative director in fashion and beauty this quality was not lost on her when she and her family ditched London for a different sort of life. The view from Charlotte’s window has a cult following on Instagram; let’s see what’s happening at ground level.

Photography by Jim Powell, except where noted. 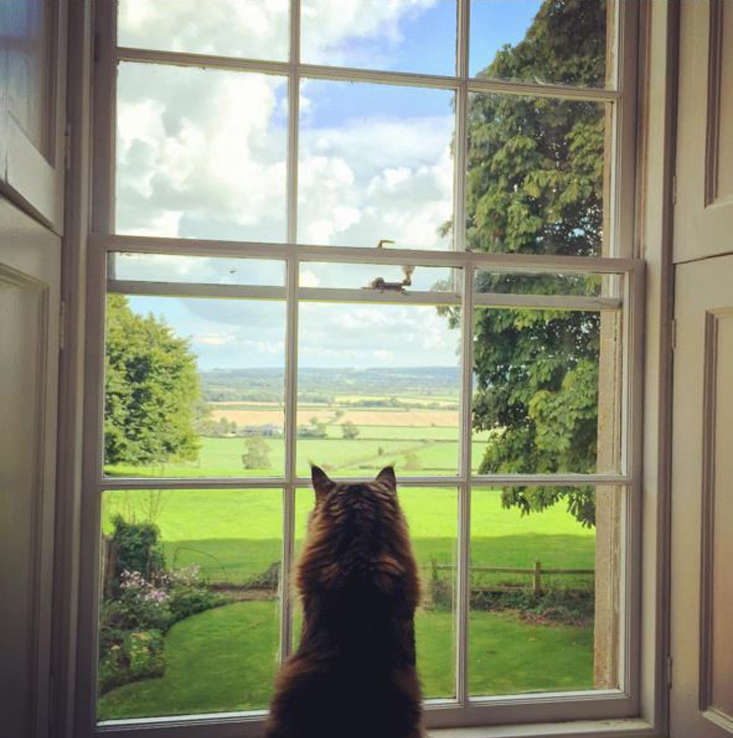 Above: Through the shuttered sash window, Charlotte’s garden has maximum light and an uninterrupted view. Photograph by Charlotte-Anne Fidler.

I first met Charlotte when we were underlings at British Vogue. She was mad about clothes and plants and collected both with a connoisseurship unusual in someone just down from Oxford. For Charlotte there were only ever two seasons, spring/summer and autumn/winter. 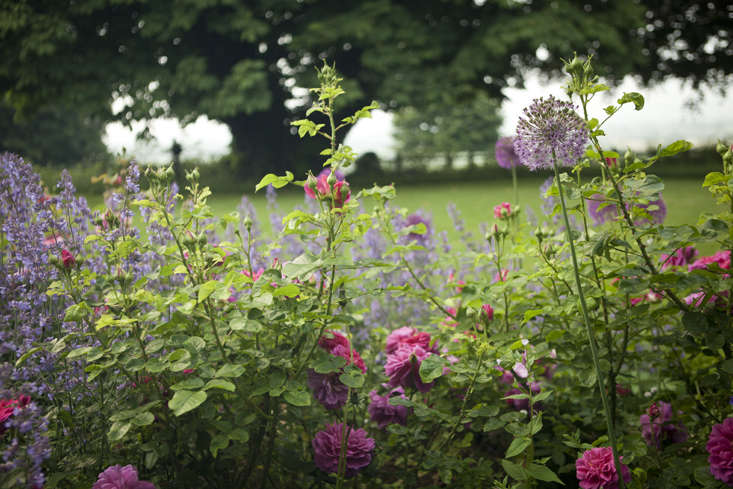 Above: Charlotte’s garden style is unapologetically romantic and pretty, with a strong leaning toward pink, purple, and green in spring/summer. More specifically, there are repeat occurrences of roses, catmint, and box. 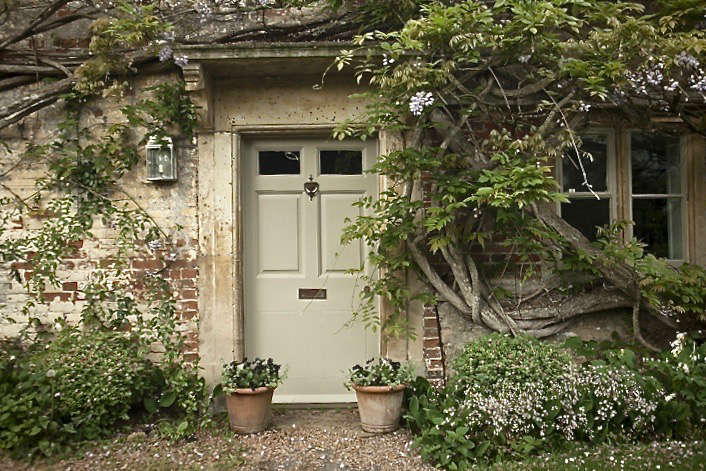 Above: Draping over the old front door and reaching around the corner of the house, wisteria is one of the garden’s attractions in May. Every view is considered: from windows, toward doors. Pots are kept in good working order, their contents complementing their surroundings. This one contains muted black viola with silvery Helichrysum petiolare. 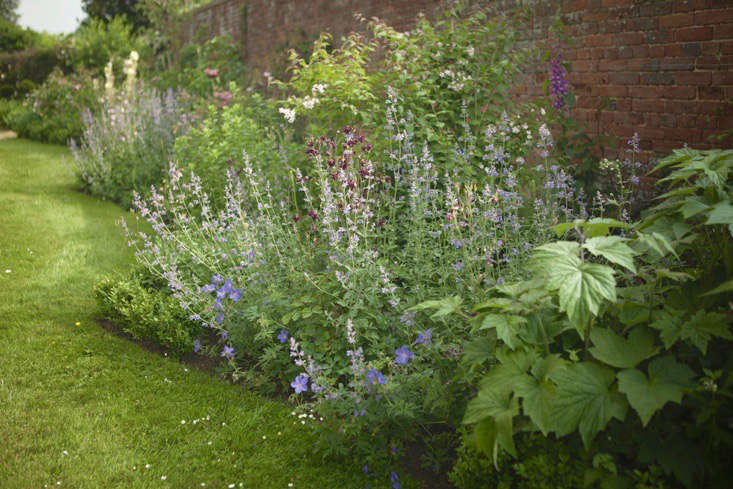 Above: The long border which ranges along the perimeter wall, seen to the left of the view from the window. Scallop shapes have been cut from the wide expanse of lawn, the first indication of Charlotte’s way with geometry. In early June, the jagged foliage of Anemone x hybrida ‘Honorine Jobert’ provides green contrast to the blue-mauve flowers of Geranium ‘Mrs Kendall Clark’ and Nepeta ‘Six Hills Giant’, with dark crimson columbine. 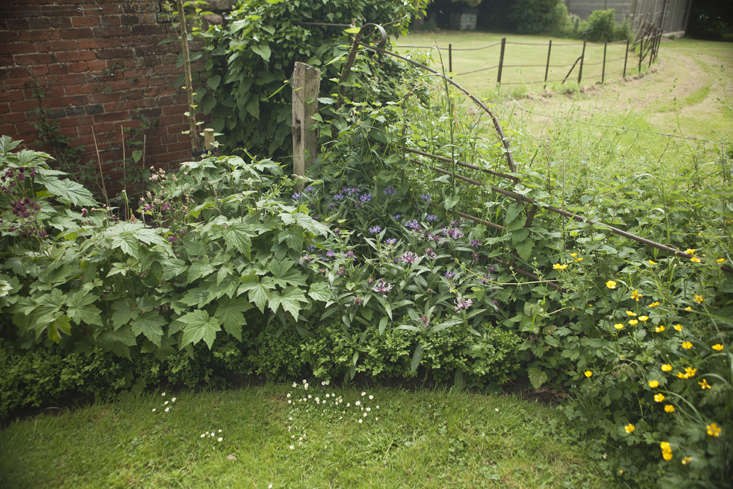 Above: Where the Long Border meets two fields. The back of the garden is marked by a simple fence, where buttercups and cow parsley occasionally meeting a rose. The planting is subtle enough not to distract from the view. 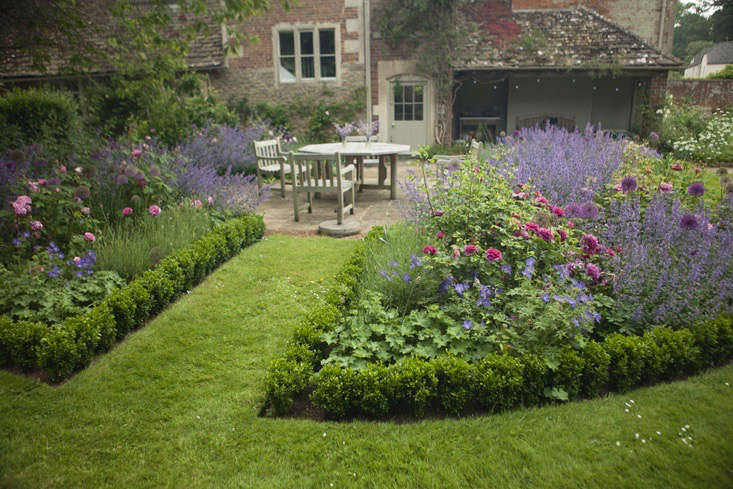 Above: The eating area has been divided so that the table and chairs are surrounded by a circle of color, scent, and buzzing (the latter is of bees on the nepeta). Box edges almost everything in this garden.

A cross-shape provides a vista straight from the side door toward the cutting garden, and from a cherry tree toward the monumental horse chestnut tree at the garden’s edge. 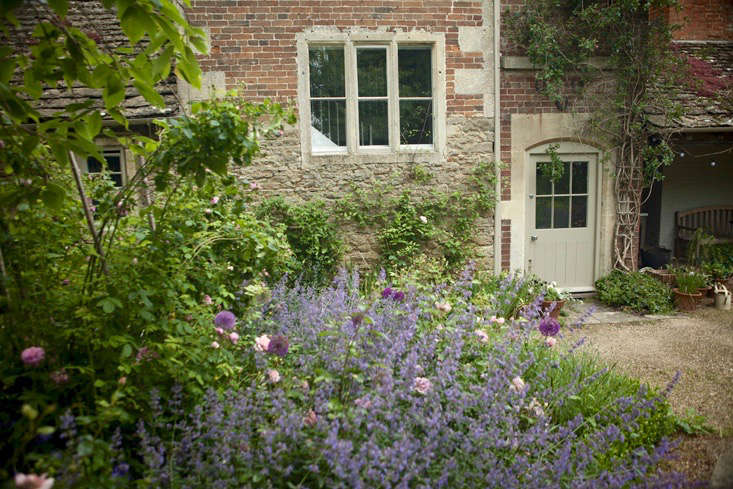 Above: Charlotte and Matthew were so blinded by the view when they first looked at the house that they didn’t notice that the house was surrounded by asphalt. Charlotte: “We splashed out on York stone, then spent weeks digging out a foot of hardcore before we could plant a thing.” 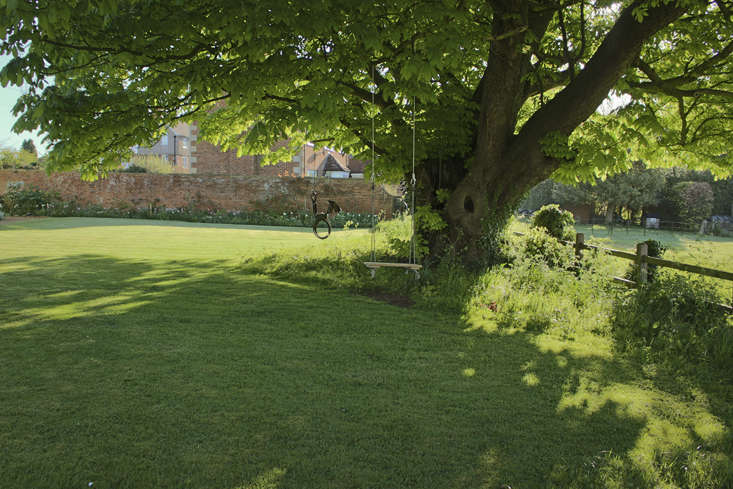 Above: The ancient horse chestnut tree is like four individual trees, joined by a hollow core. It harbors an impressive eco-system as well as a couple of swings.

“The big trees frame the view brilliantly,” says Charlotte (there is a copper beech nearby). “They are home to endless birds including our own owls, who are truly magical to hear at night. Because my flower beds aren’t near the trees, the shade they cast is welcome on hot, summer days.” 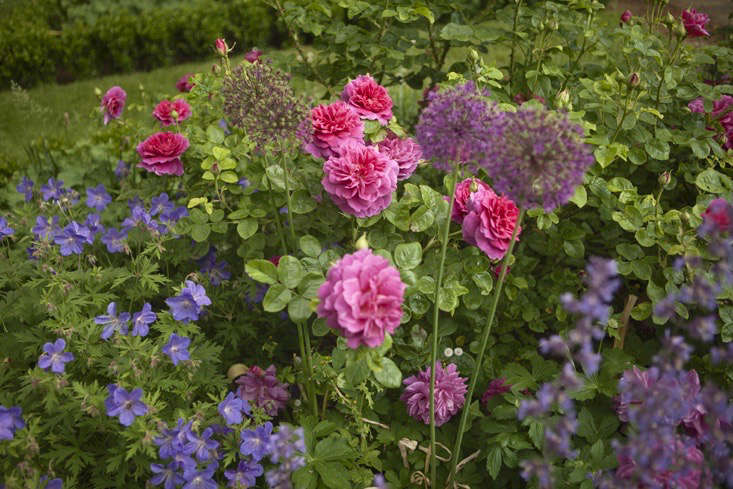 Above: A cross-section of the garden before midsummer. Charlotte used to become despondent about the garden after June, until she discovered dahlias, which she grows in quantity in the cutting garden (along with nicotiana, zinnias, salvia, Ammi majus, A. visnaga, nigella, larkspur, and tons of sweet peas).

“The plan is to have dahlias all along the long border in pale pinks, pale yellows, and deep maroons.” says Charlotte. “I also have pale and dark hollyhocks—but wish I could get hold of some single-flowered ones.” 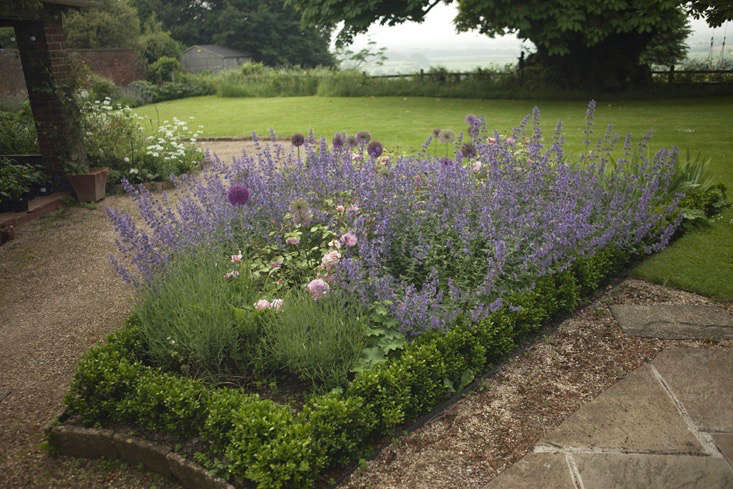 Above: Charlotte and her husband, Matthew, were struggling to make sense of the asymmetrical shape of their property and benefited from the advice of garden designer Jolyon Humphreys. He suggested using elements of the house as a focus when there were no obvious lines of symmetry in the garden. The criss cross of panes on the glazed side door provided guidelines here. 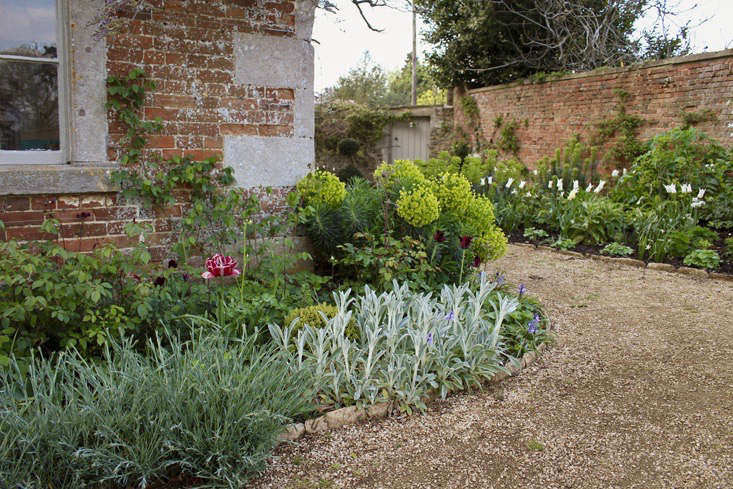 Naturally, different parts of the garden reach their peak at different times. The border under the living room window comes alive earlier in the season, with emerging Dianthus ‘Mrs Sinkins’ and Stachys byzantina photographed in April last year. 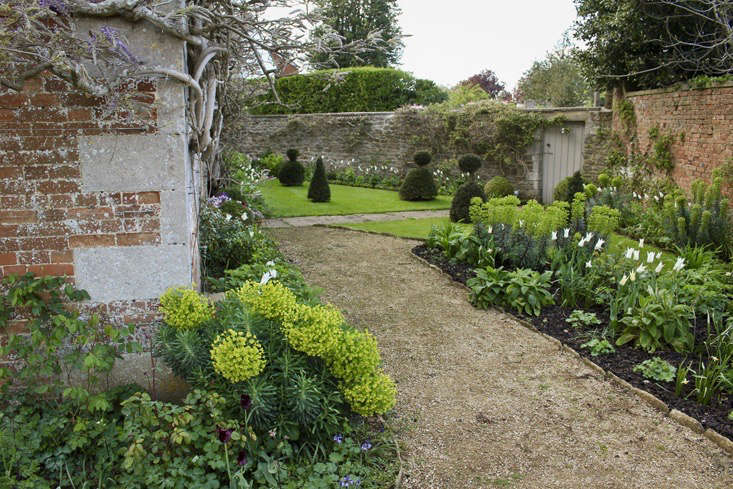 A lesson in awkward-shaped gardening. Yew topiaries mitigate an acute angle outside the kitchen window, while a straight path cuts across from the old porch to a door in the wall. Acid green whorls of Euphorbia characias subsp. wulfenii brighten the east-facing corner, along with scores of white lily-flowered Tulipa ‘Triumphator’. 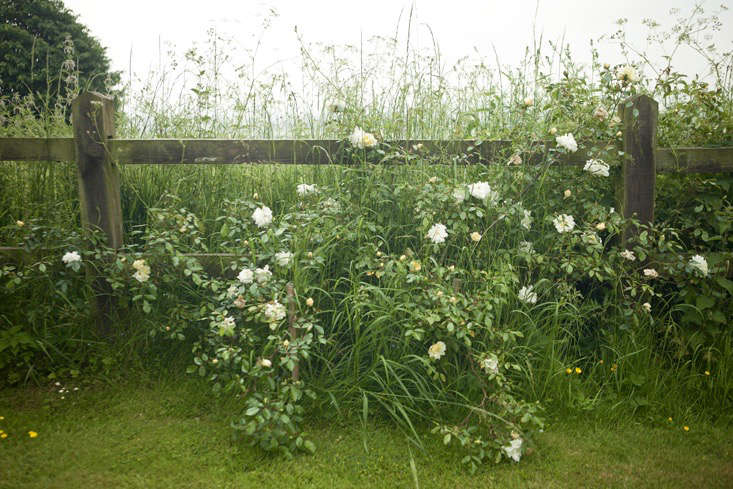 Above: Garden’s end, with Rosa ‘Albéric Barbier’, a rambler.

On the extraordinary light that floods the garden Charlotte says: “My theory is that it’s to do with being on top of a hill, so that when the sun rises and sets the light is always angled upwards.” Adding: “I regularly have to stop what I’m doing just to look at what the light is doing to the landscape and the garden.”

For more romance, see A Gardener’s Diary: A Year in Wales with Arne Maynard and Garden Visit: The Unique Charm of Glyndebourne in Sussex.