“David and Rosemary Verey made a garden here for their pleasure” is the simple statement on a carved oval, set in the Doric temple at Barnsley House in Gloucestershire. Their garden was made for themselves, but because they were well-connected and gregarious people, its renown spread and it was soon shared by many, with tens of thousands of visitors a year during the lifetime of garden designer Rosemary Verey.

Mrs. Verey’s Barnsley House has been a boutique hotel for almost a decade, but it is the force of her personality and her celebrated planting style which gives the place atmosphere. 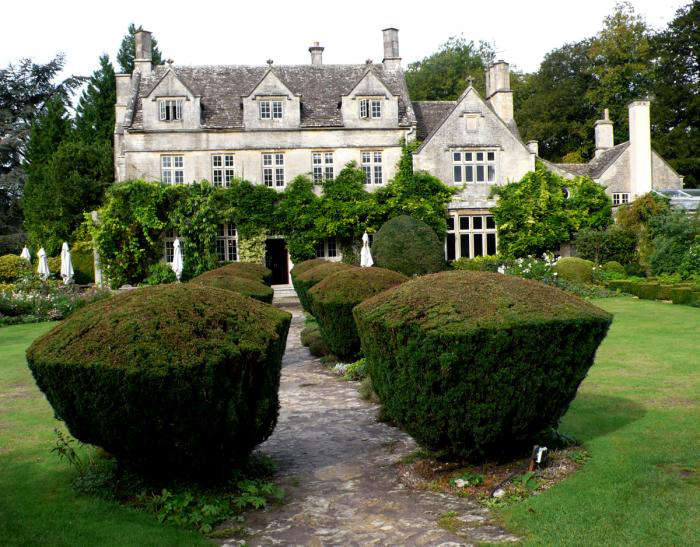 Above: Yew and box topiary are integral to the Verey style. 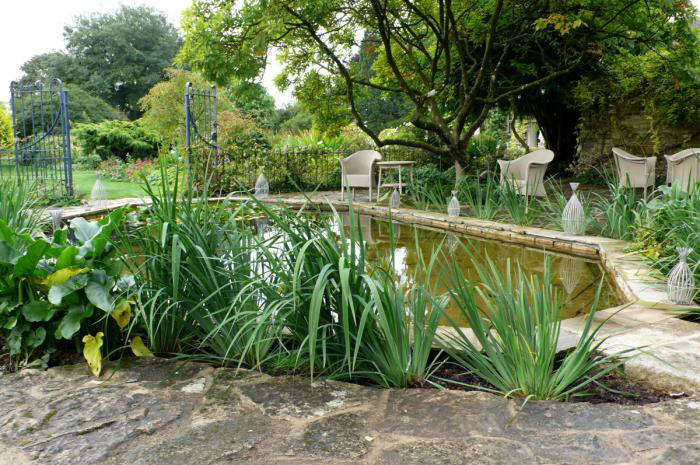 Above: The octagonal pond in an enclosed garden by the temple. This is a more relaxed area away from the main paths and hedges. 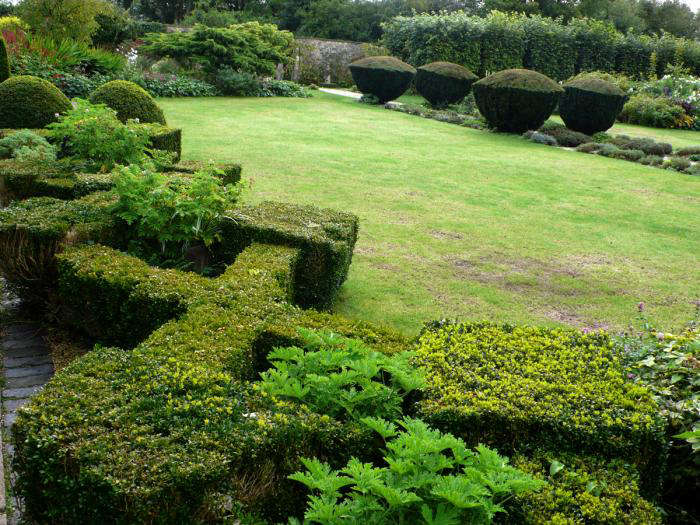 Above: The Herb Garden was celebrated in its day but herbs are now gathered from the Potager and the vegetable beds behind the house. This box lattice now houses scented pelargoniums. 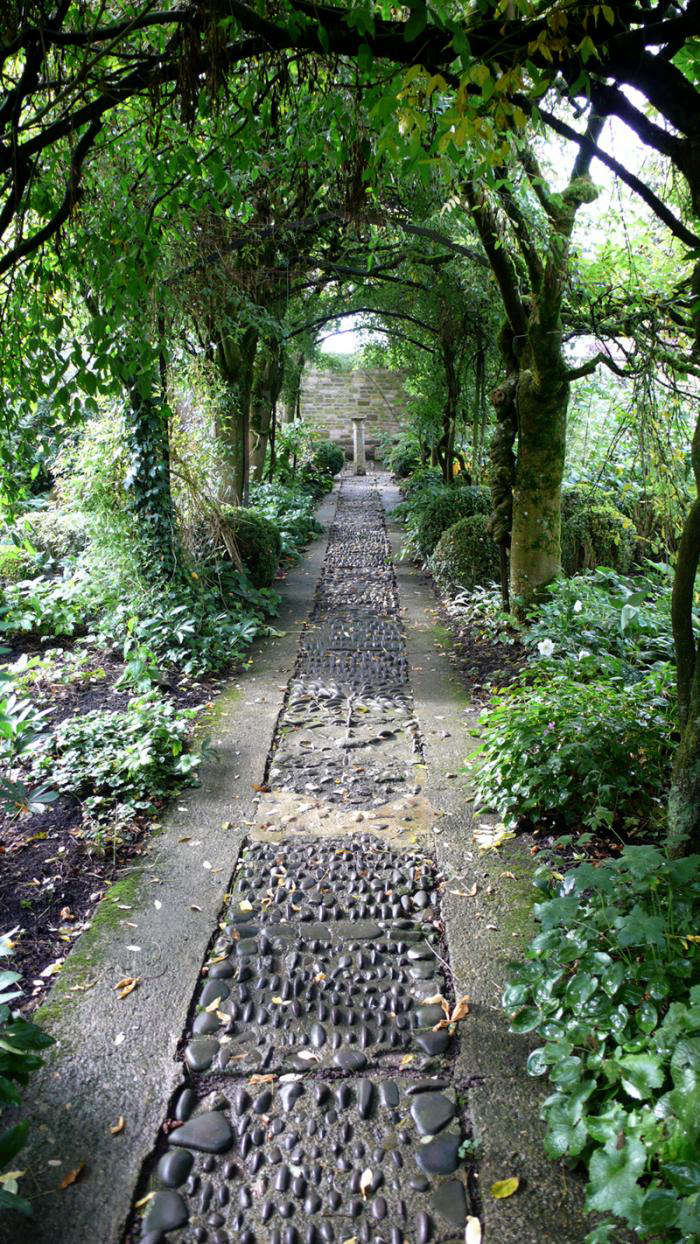 Above: As the Head Gardener Richard Gatenby notes, the most innovative gardens have been created often by keen amateurs. Like Margery Fish at East Lambrook Manor and Lawrence Johnston at Hidcote, the garden owner was the garden designer. It was purely personal, with no regard to horticultural “rules.” The famous laburnum walk (above) is out of season but looks intriguing all year round. The laburnum trees may not be trained the way a graduate from Kew would do it and the trees, which were a 25th anniversary present to the Vereys, have their own quirks. They now have to be very carefully thinned and treated as individuals. 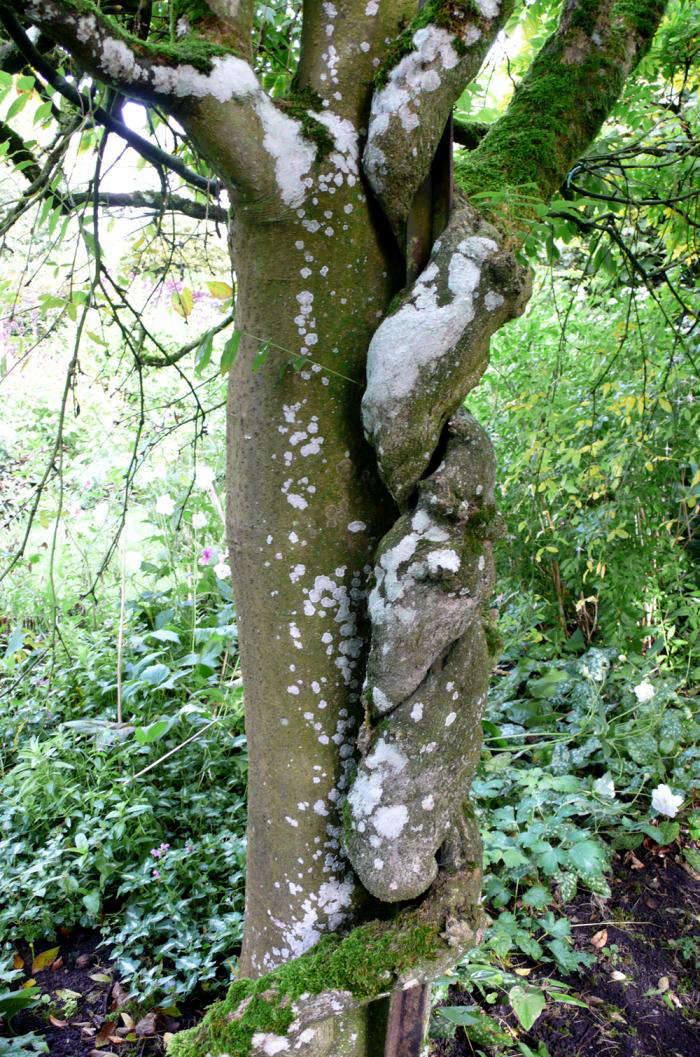 Above: Wisteria grows up around the laburnum. Fortunately they are both from the same family (Fabaceae) and can be spur-pruned together. 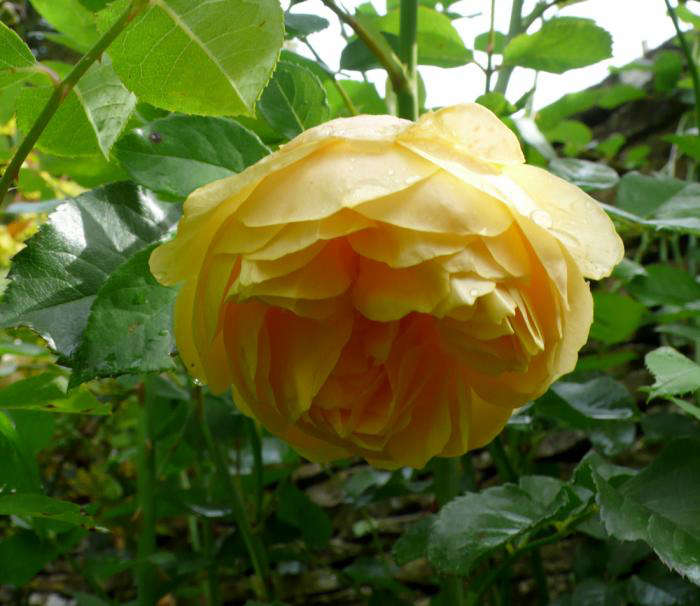 Above: A late David Austin rose, Golden Celebration, at the front of the house brings out the warm hues of the Cotswold dry stone wall behind it. 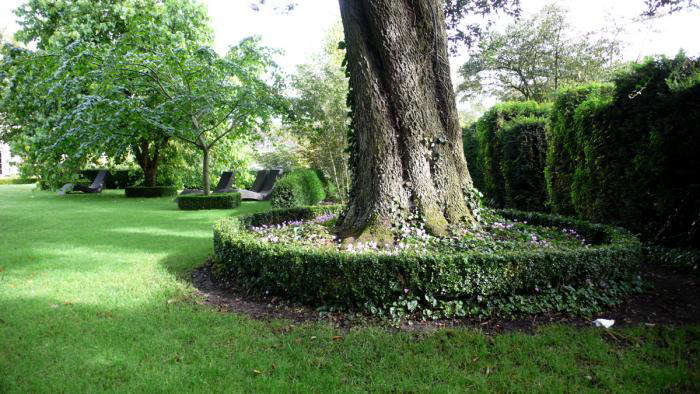 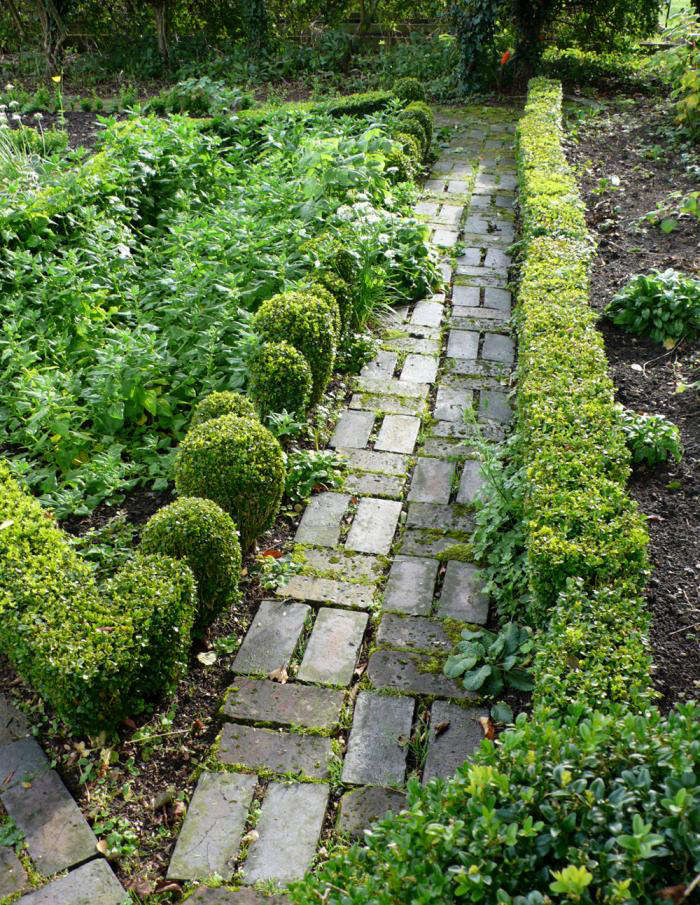 Above: “Mrs. Verey pulled things together in an original way,” explains the Head Gardener, who has been at Barnsley since Verey’s time. “She wanted a pleasant place to spend time in, growing vegetables.” Hence the Potager, above. The Vereys did a lot of garden visiting and were very happy to adapt ideas to a smaller scale at home. The Potager was based on plantings at Villandry in the French Loire Valley and also the writings of William Lawson in the 17th century, who advised “comely borders with herbs.” 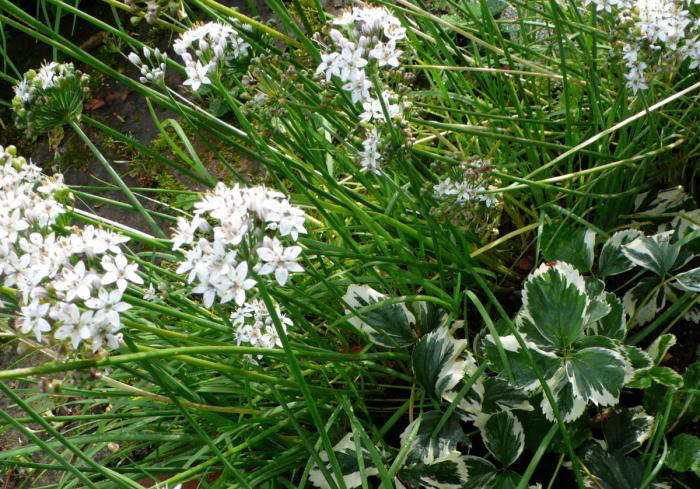 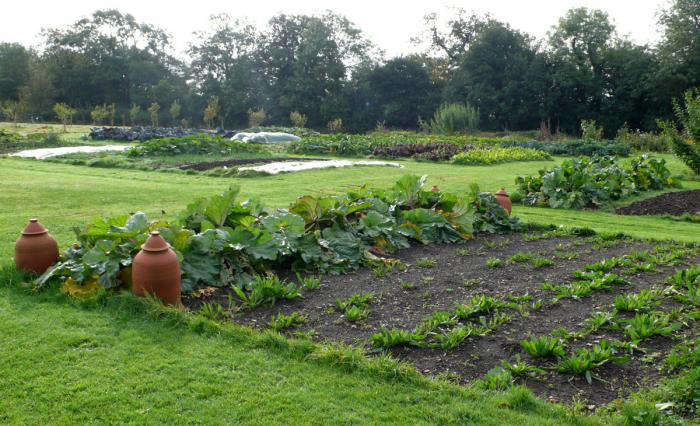 Above: Others see beauty in lines of vegetables, and are gratified by the huge increase in productivity. The field behind the lane at the back of the house is home to the vegetable plot which supplies the hotel restaurant. The land is gently ridge-and-furrowed, a style of farming left over from Saxon times. 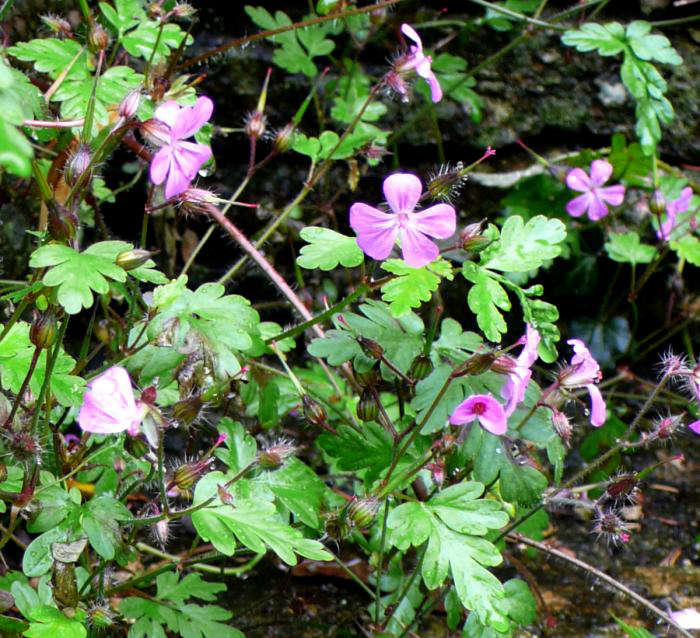 Above: One of Verey’s most interesting books is A Countrywoman’s Notes, published in 1989. It discusses her biggest influence: the English countryside. Prince Charles wrote the Foreword: “She talks of Herb Robert (that very nice weed), of June strawberries, roses and peas, of the melancholy of February and the thrill of Spring, the hell of ground elder and the heaven of her chicken run and manages to make you feel extremely un-guilty that you have not pruned your plum tree.” Herb Robert (above) grows all around Barnsley, springing up from cracks in walls and paving. 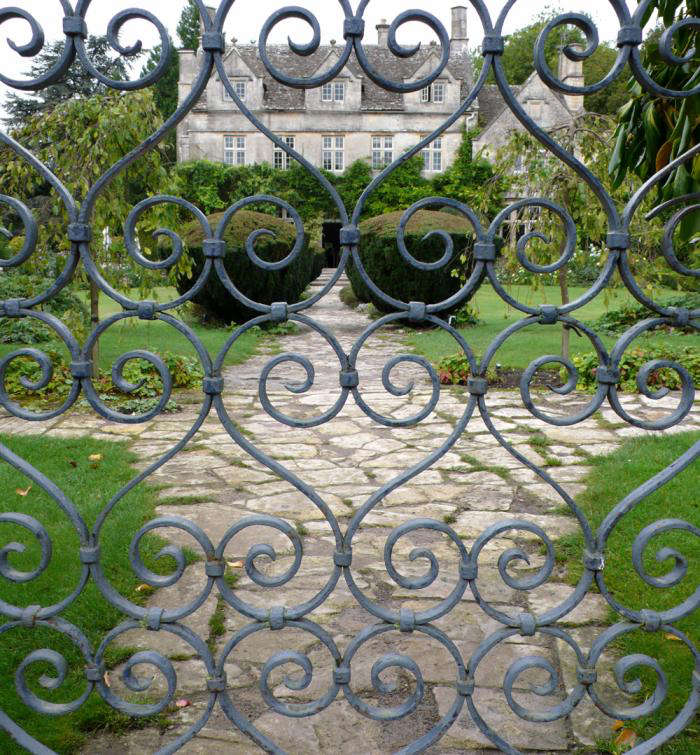 Above: The garden gate at the back of Barnsley House, which connects the garden to the Potager, across an unpaved lane.