At the end of summer, a serene clump of mauve cyclamen under a tree is steadying, a reminder of winter and early spring. Unlike autumn crocus which, arguably, looks as though it’s got lost in the seasons, cyclamen in autumn looks as right as it does in spring. It also looks perfectly at home indoors during the winter holidays. However, the latter species, also known as florist’s cyclamen, is not hardy. 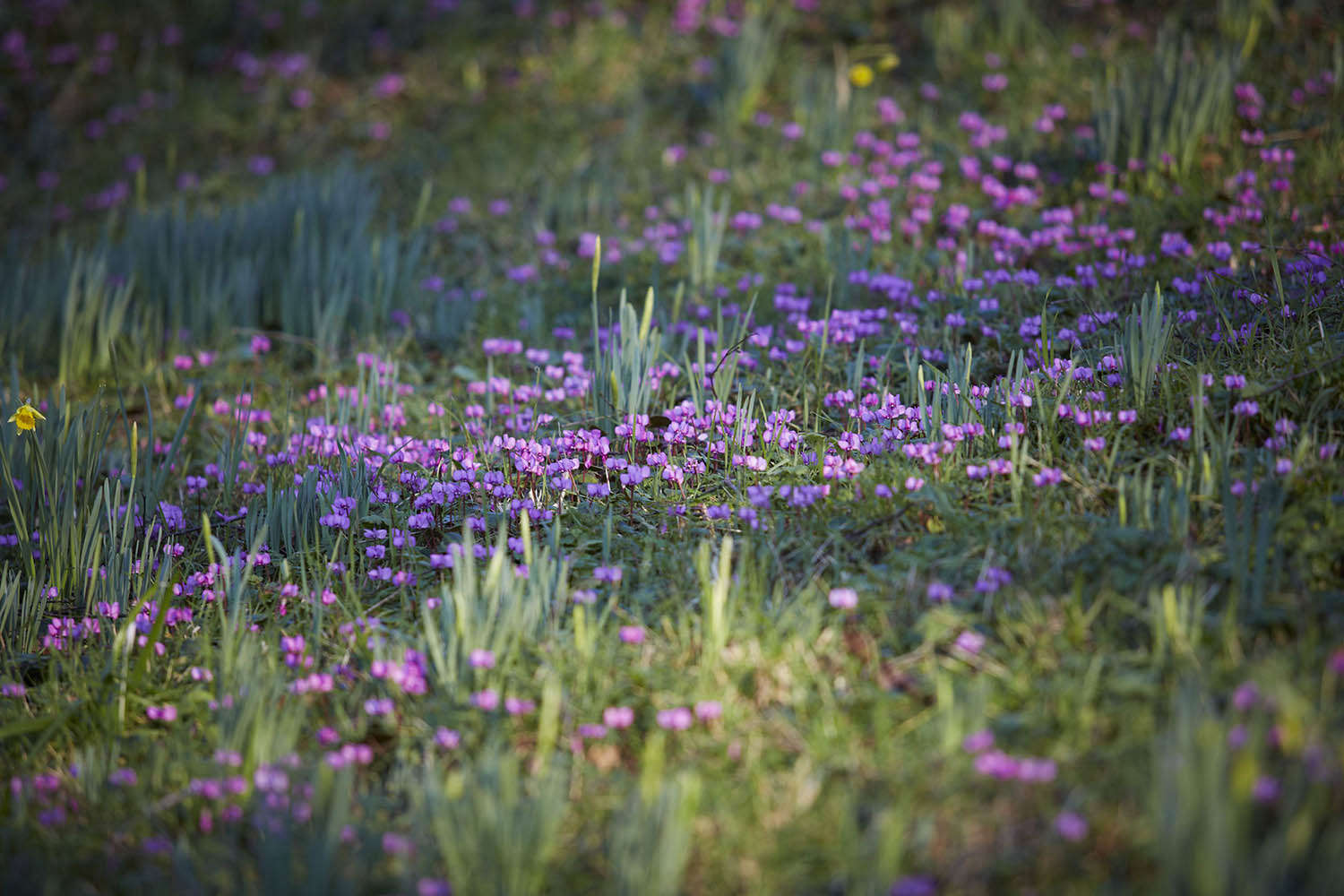 Above: Cyclamen coum, the most popular hardy spring variety, forms an early carpet where other bulbs like daffodil will flower later. The very similar-looking Cyclamen hederifolium is the one to look for in autumn, best appreciated away from the crowd. 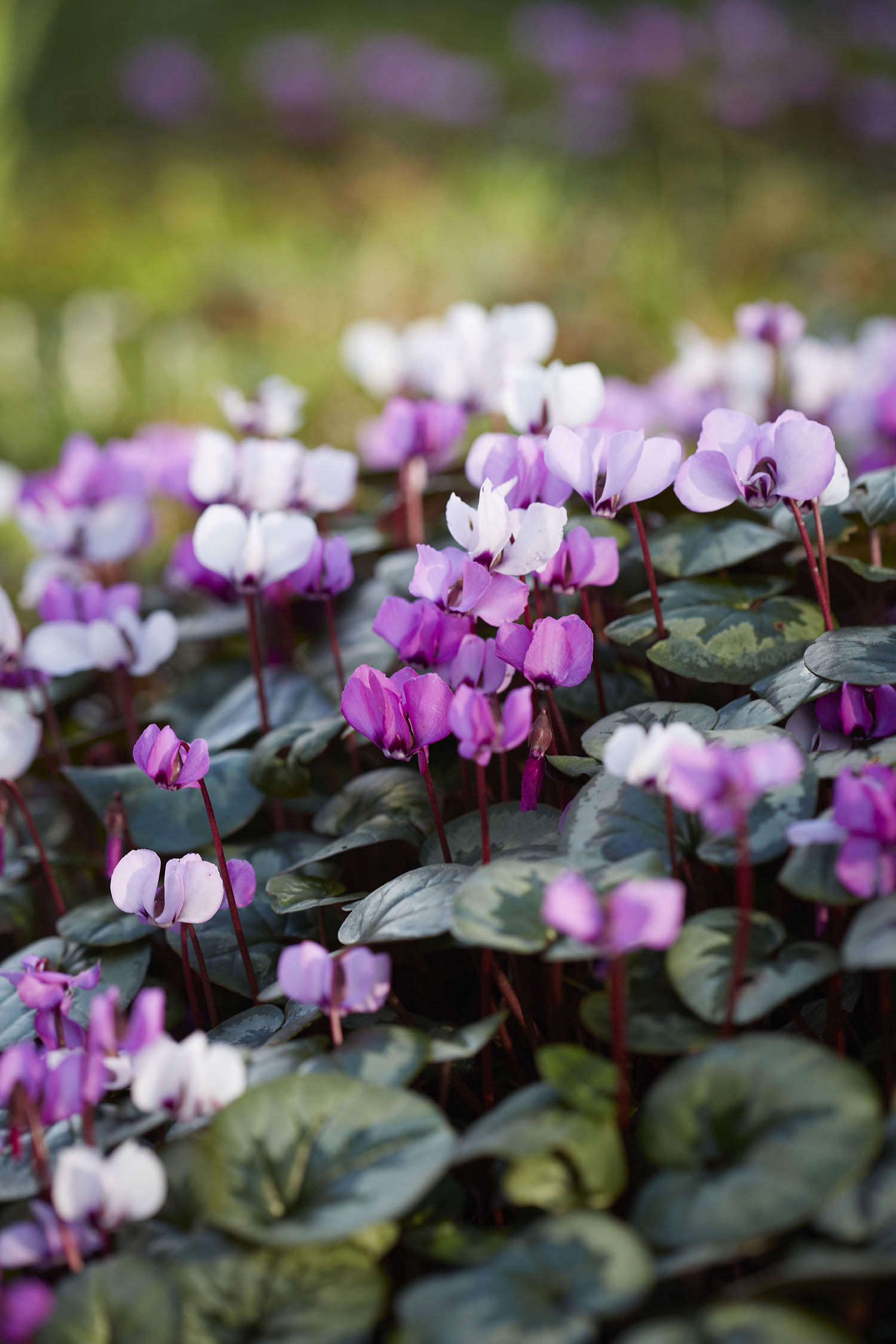 Above: Part of the appeal of cyclamen is the tonal differences between flowers. Foliage is also a focal point, tending toward the ivy-shaped in the C. hederifolium (translation: “ivy leafed”) and rounder, yet still distinctively patterned C. coum, pictured here. 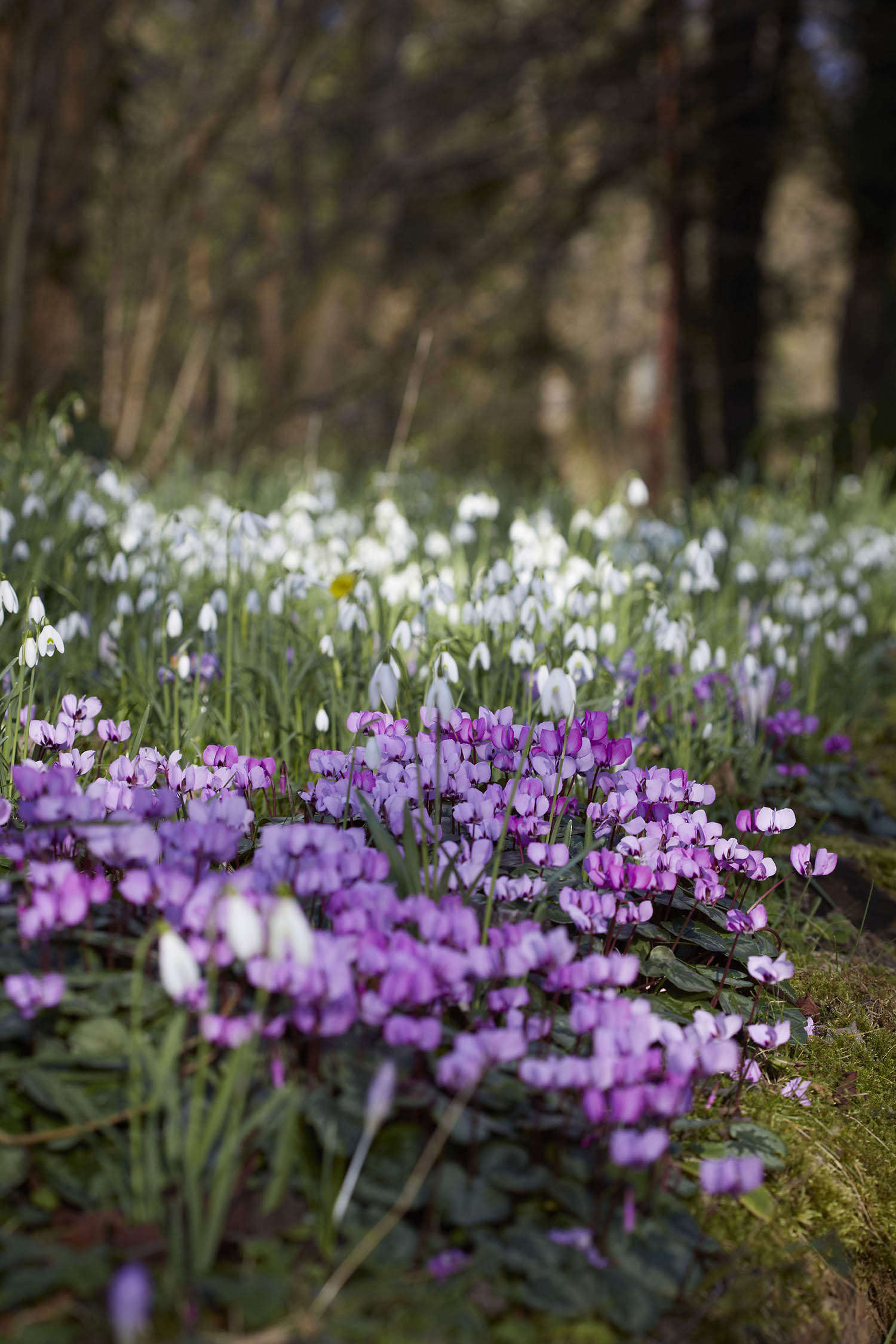 • The hardy species of cyclamen (including C. hederifolium and C. coum) thrive in zones 5-8, while the wild species of Cyclamen persica, from which florist’s cyclamen descends, is tender, growing in frost-free zones 9-11.
• Emphasize the sense of “otherness” in autumn cyclamen (C. hederifolium) by planting it away from summer flowers. A tree off on its own is a good spot, where it can quietly spread without clashing, color-wise.
• Remember also to plant C. hederifolium away from spring bulbs; it really needs to be on its own. 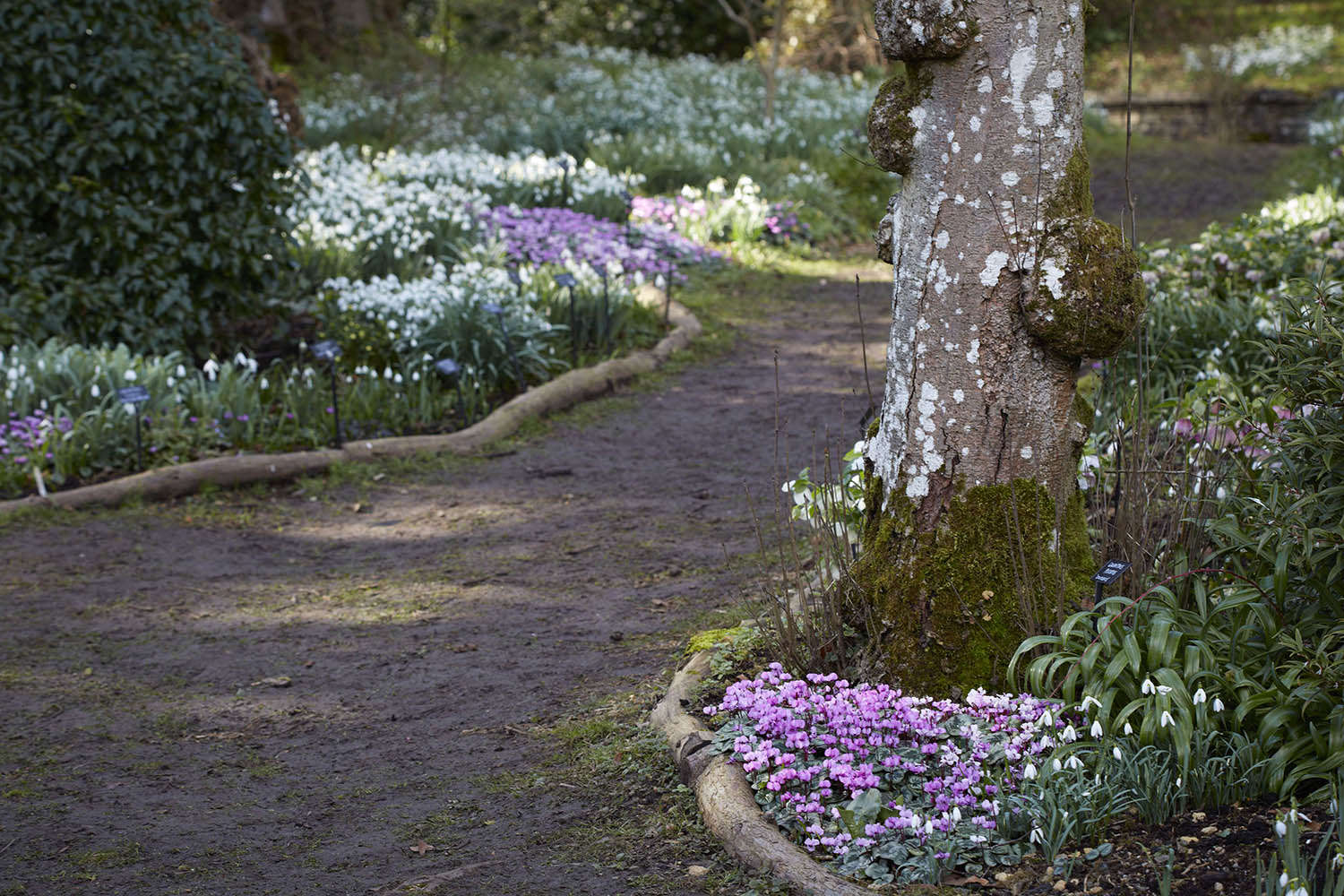 • Autumn cyclamen (C. hederifolium) are ideally suited to the base of a tree, since they need to remain dry during dormancy, which coincides with the greening of the tree’s canopy.
• A hardy variety grown for its purple coloring and good scent is autumn-flowering C. purpurascens. It is trickier outdoors, therefore not as popular but it does well, with some pampering, in an unheated greenhouse.
• Florist’s cyclamen (cultivars of C. persicum) are easy to smother in overheated, underlit sitting rooms. Keep them somewhere cool and bright and place them on the mantel so that they can be admired, before putting them away again (like children being presented to their parents for inspection by nanny). 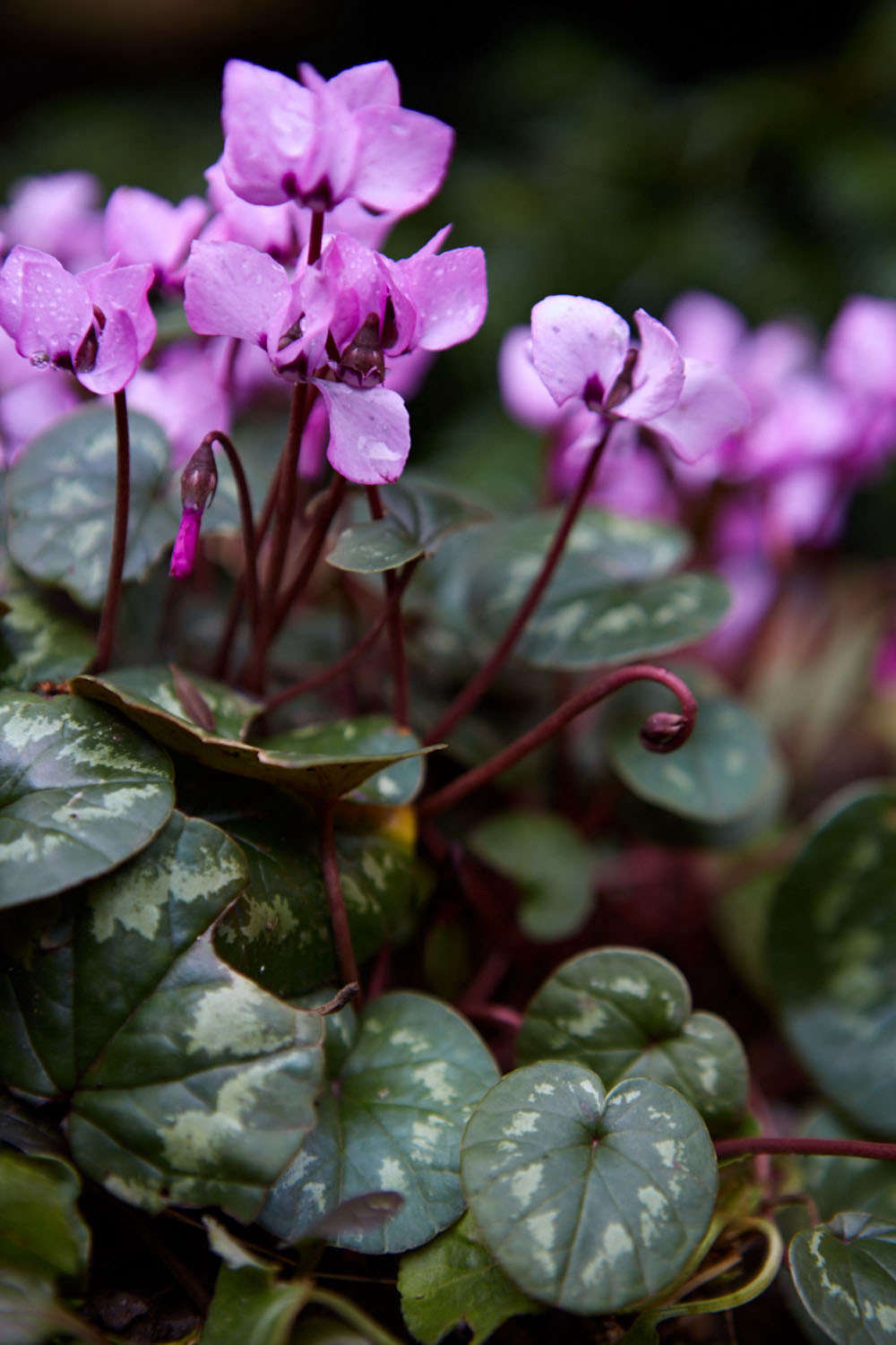 Above: Besides intriguing flowers and leaves, cyclamen are distinguished by their stems, which coil back like springs after flowering. The sticky seeds are carried back to the ground, to attach themselves to ants and other insects. Perhaps the most fascinating part of this plant, botanically speaking, is the tuber. Like a round, rather squat potato (its roundness giving cyclamen its name) it not only stores energy but is built like a tank, protecting the life form inside from adverse conditions. Cyclamen tubers are always bigger than expected so they should be excavated, if necessary, with great care.

Looking to add to your landscaping? Our Garden Design 101 guides can help. For more of our favorite bulbs and tubers, see:

Everything You Need to Know About Bulbs and Tubers