“It’s a lovely immigration story,” says Alexander Hall, who came to the United States “with nothing” eight years ago. Hall grew up in Melbourne, Australia, and has worked for more than 20 years in the restaurant business. Since arriving in New York, he’s been busily opening a slew of cafes, and putting his distinct mark on each.

According to Hall, there’s a big difference between Australian and North American coffee shops. “Australian cafes are more like modern diners,” he says, “with an emphasis on customer service.” His cafes serve breakfast and lunch only, and though the mood is casual, they have quality food, table service, and friendly staff (no surprise that almost half of Hall’s 48 employees are Australian). Of course, there’s great coffee as well.

Whatever the theory behind it, Hall’s approach seems to be working. He now owns five cafes in Brooklyn and Manhattan, with a sixth about to launch and more in the works. We stopped by Brunswick, which opened on Memorial Day in Brooklyn’s rapidly gentrifying Bedford-Stuyvesant neighborhood, to see what Hall is up to. 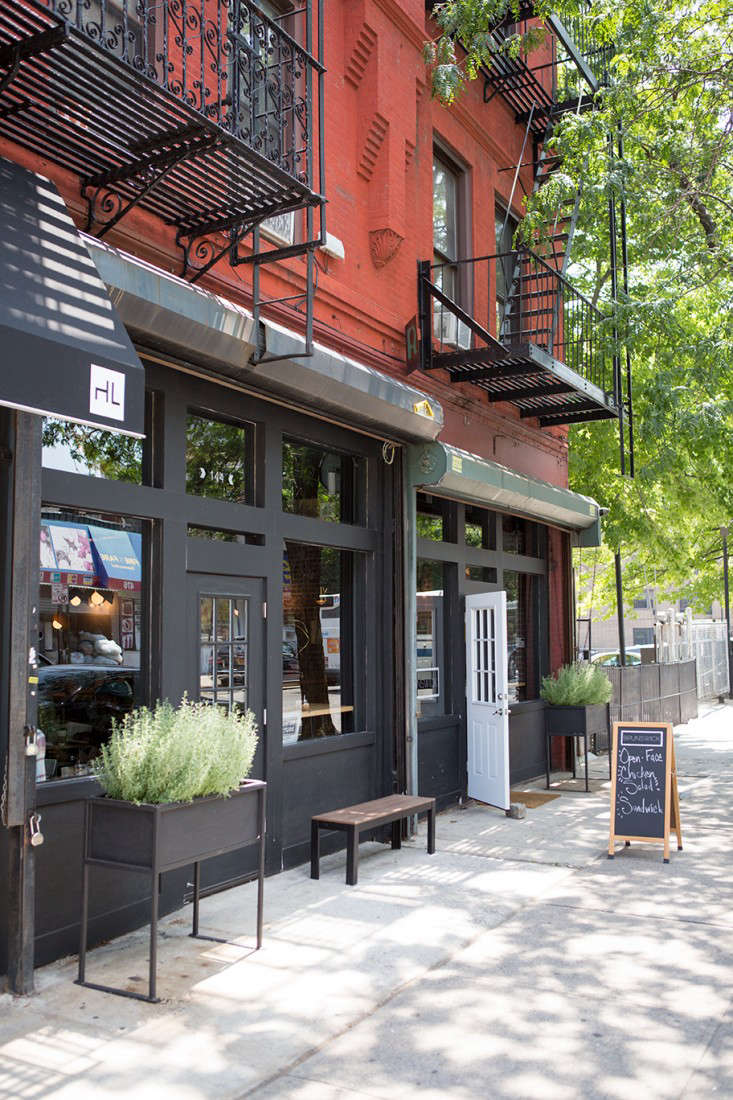 Above: The entrance to Brunswick is on a leafy block of Decatur Street. Owner Alex Hall designed the two planters outside to be waist-high so customers can see them from inside, and had them custom-made by a steelworker he knows

. He also oversees the plantings, which are changed regularly. (This time it’s fragrant lavender.) Did we mention that Hall has a hand in every detail? 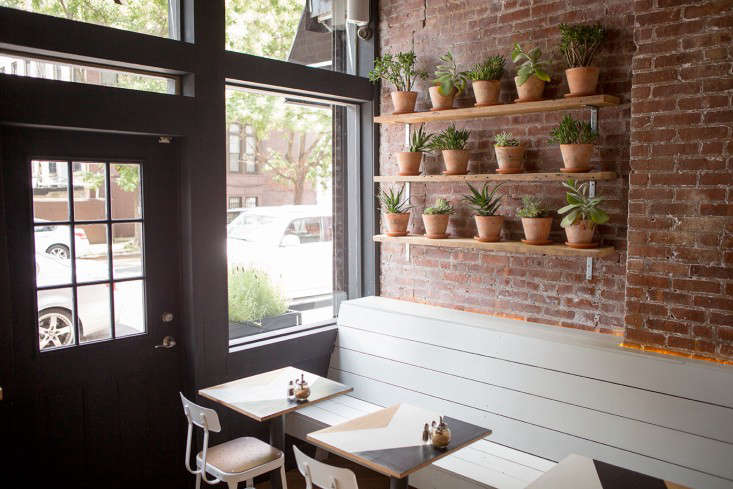 Above: Hall hires Ty Tan Designs to do his plantings. A horticulturalist who trained at Cornell, Tan also installed a vertical garden at Hall’s Rosella Coffee Shop, on the Lower East Side. The wall of terra-cotta pots at Brunswick is inspired by the ones built by Australia’s leading eco-gardener, Joost Baker. 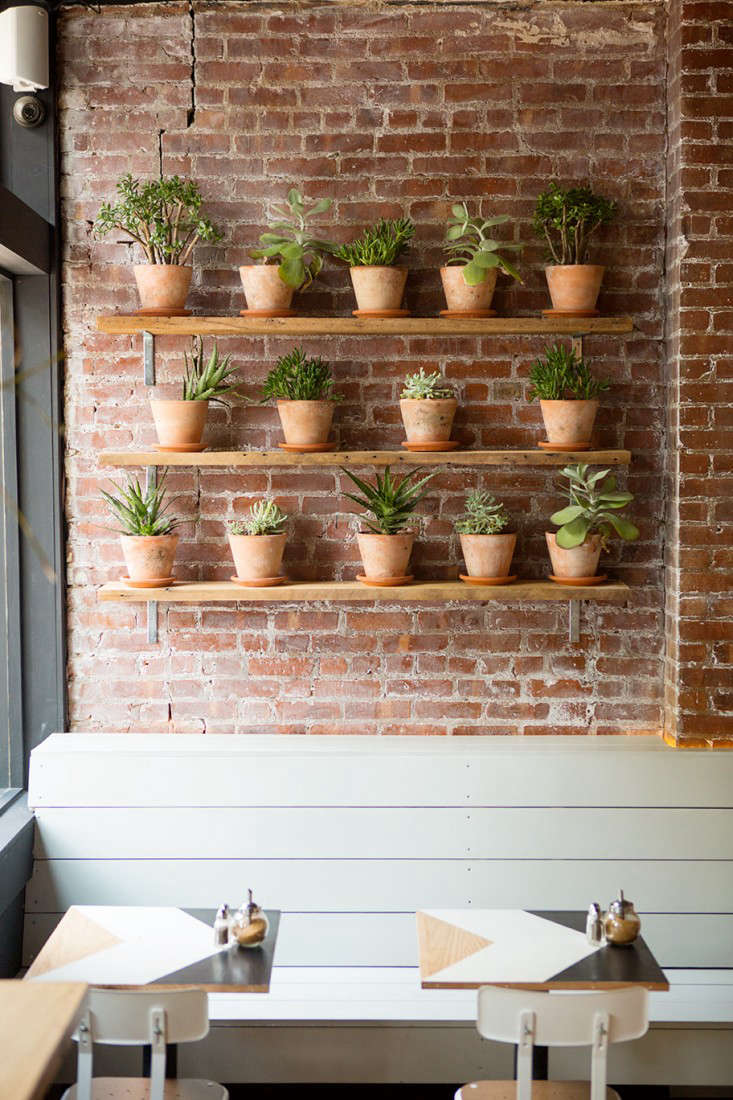 Above: “Alex is really into plants,” says Ty Tan. “He’ll tell you what he wants, but then he lets you go with it. He doesn’t micromanage.” That said, it was Hall who requested the pots of succulents, and then specified that the pots should be aged. Tan got the pots from the New York Botanical Garden, and aged them with garden lime. “It only takes a few days for the white look to appear,” she says. “Then it keeps going as you water the plants and the water seeps through the clay.” 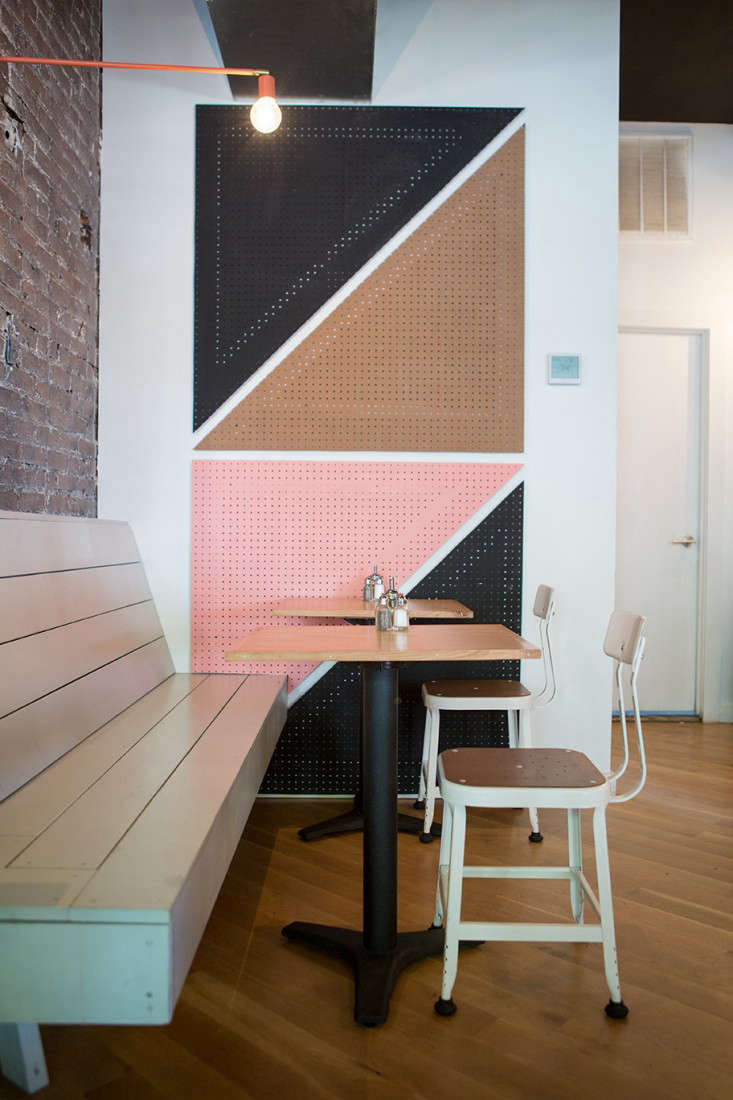 Above: Hall planned the interior to have several seating areas, including this quiet corner toward the back. The patterns painted on the tables and pegboard lend a mid-century modern look.

Growing up with an architect father, Hall took an early interest in design, which has become a passion for him. “I sell coffee,” he says. “I see design as my way of being creative.” 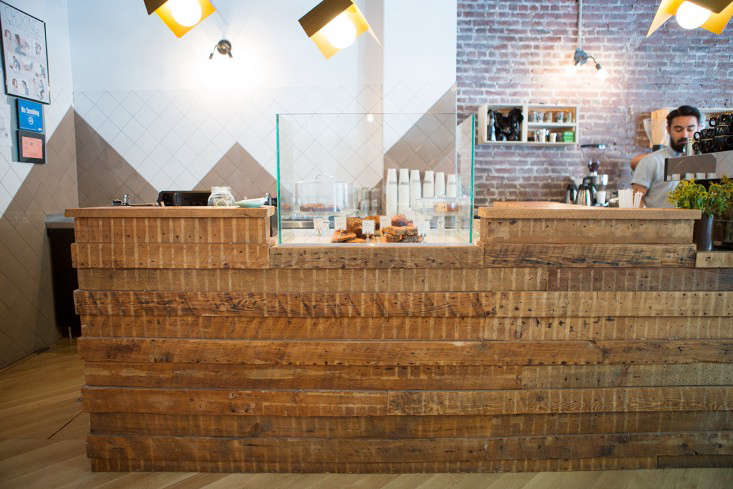 Above: Now spick and span, Brunswick was carved out of a storefront space that had been boarded up for a decade. The reclaimed pine used to build the bar was found on the site. The anodized brass pendant fixtures come from Dixon Branded. And the flower arrangements are by Park Delicatessen, a combined skateboard shop and florist (only in Brooklyn, folks). 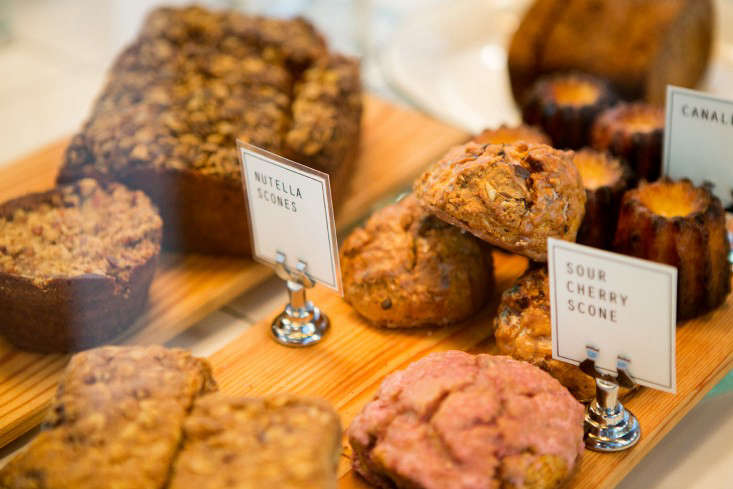 Above: Brunswick’s pastries are made at a sister cafe, Bluebird Coffee Shop. Besides the Aussie-influenced Nutella scones, you can snack on coconut Anzac cookies (originally made to send to the Australian and New Zealand Army Corps serving in Gallipoli in World War I) and Sasquatch cake (with oats, chocolate chips, and banana). 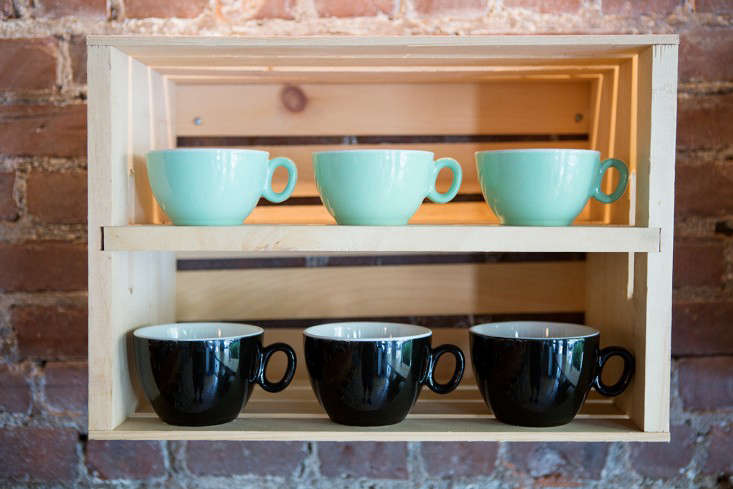 Above: The excellent coffee is supplied by Counter Culture, based in Durham, NC. Barista Henry Rodriguez, who grew up in the neighborhood (i.e., not Australian, but still friendly), plies his trade with almost surgical precision. 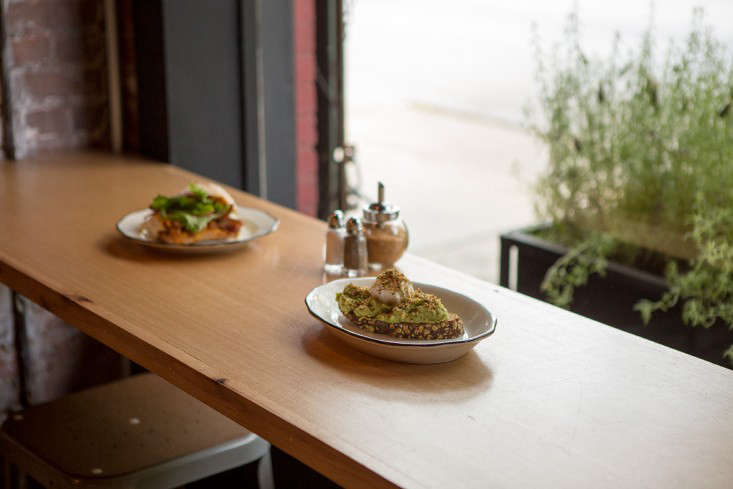 Above: Though it appalls some New York brunchers, Hall’s cafes are all “bagel-free zones.” There are no French fries, either. “Try something different,” he cheerfully suggests, such as the avocado toast (right) or the fried egg sandwich with tomato Kasundi sauce (left). Not shown: The meatball panini, which has become a favorite. “There are people who just walk out when they find we’ve run short,” says chef Cynthia Albarran. 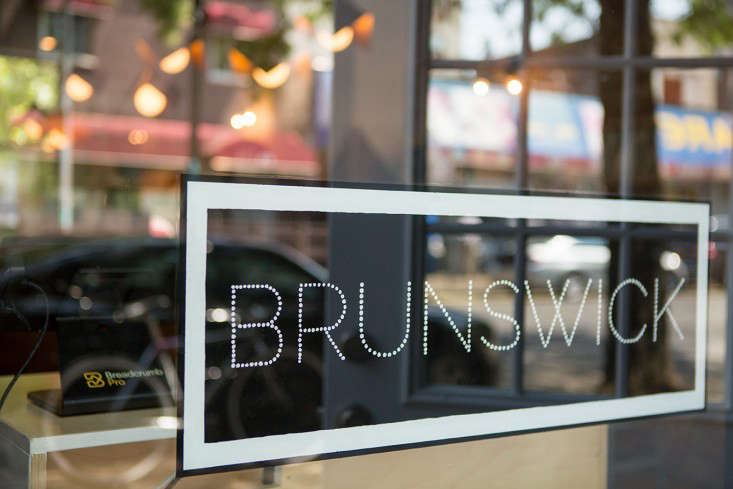 Above: Customers tend to live in the neighborhood–and when they’re here, they talk to each other. That’s part of Hall’s master plan. “I only put one electrical outlet for customers in each cafe,” he reveals. “It’s meant to be a place to socialize.”