“We’ve got the Wilderness!” my friend Annabelle announced last summer, knowing that I’d be as excited as she was. As a restoration project, her new home couldn’t have better credentials: it had been modernized by the influential designer Nancy Lancaster in the 1920s and left alone, more or less, since then. Nancy’s obsession with detail was evident from the remarkably well-appointed closets but also extended to the garden. In front of the 1778 house we could see the woolly outline of a formal parterre, based on a design from the Alhambra.

But it looked as though it would soon be lost. The dog roses were having a glorious time amid the box blight, with bearded iris, hardy geraniums, and peonies pushing their way through nettles. Three of the four pollarded crabapples that made up the corners of the parterre were dead. In the garden beyond, there was an orchard, a woodland, a stream with a skeletal bridge, and a stable yard with swallows flying out of all the stalls. It was going to be such fun! And yet, Annabelle didn’t even own a watering can.

Join us (and Annabelle) over the next few months as we discover clues to the past and resurrect this lovely old garden-in-progress. It should be noted that Annabelle is starting a new curtain business, has four children under 13, and her budget for the garden is $50 per month.

Let’s take a look at what she has to work with: 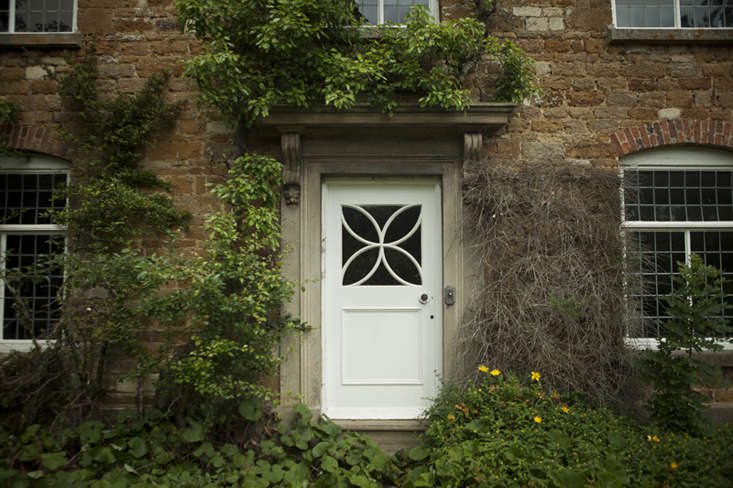 Above: The perfectly geometric front door, appropriately facing on to the squares and circles of Nancy Lancaster’s rose parterre.

The division of labor was quickly worked out: “I’ll do the humping, you do the zhooshing,” said Annabelle. There hasn’t been a great deal of the latter, though I’ve pruned roses. The main question, even though it is June, remains: “Where to begin?” 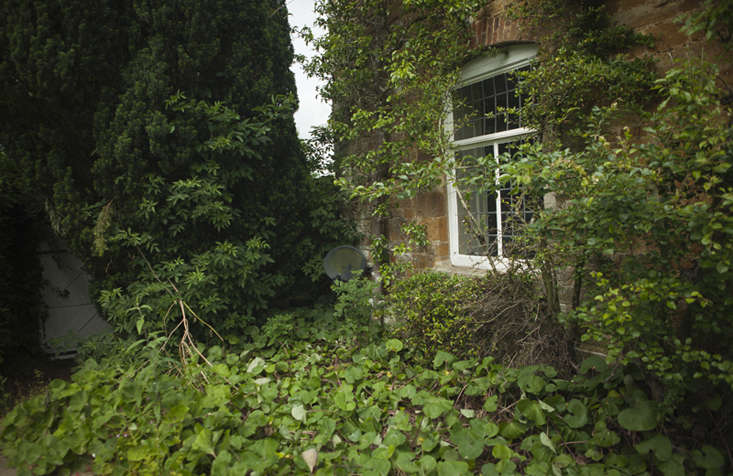 Above: Why grow roses round the door when you can grow pears? Nancy Lancaster’s style was smart but never conventional. The remains of four espaliered pear trees are ranged across the front of the house and we know that a giant pear grew up toward the roof on one side. Now, only hundreds of nails remain. It is my avowed intention to bring the pears back.

Annabelle doesn’t like to sit and ponder. In the autumn she contacted David Austin Roses for advice and they sent over one of their best men by train. He advised grubbing out the box and ditching all the roses. The beds would have to be completely cleared and a nursery area created for growing box cuttings, if my friends were to avoid spending a small fortune on edging eight beds. 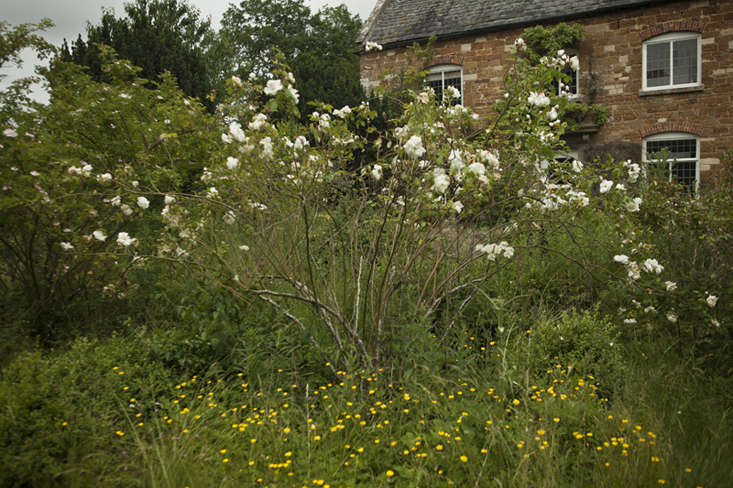 Above: Here is the “Before” garden last summer, after 10 years of tenants who shied away from the challenges of Nancy’s garden. The roses are shorter now, with their suckers removed, but there are still plenty of buttercups, hogweed, and weed trees, springing up everywhere.

The heart of the parterre will remain formal, and rose-filled. At the end of this area there is an unedged flower bed backing on to a low wall over a drop, followed by another drop. It is a kind of staggered ha-ha. The man from David Austin suggested the small-flowered Rosa ‘Centre Stage’ (£15.50) to spill over the first wall. On the second bank, weeds could be suppressed with a reliable ground cover, such as Rosa ‘Grouse’ (white, with single petals; £15.50) part of the ‘Game Bird’ series, which includes Partridge and Pheasant. They were all bred in the 1980s to cover ground horizontally. 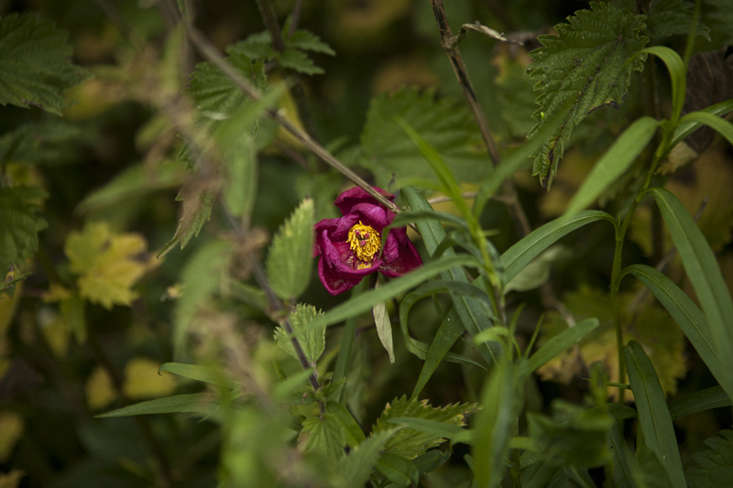 Above: Peony, asking to be pollinated through a mass of nettles and rosebay willowherb.

Nancy Lancaster was described by the late David Hicks as “the most influential English gardener since Gertrude Jekyll,” which is rather thought-provoking. She made her name primarily in interiors, later becoming the co-owner of Colefax and Fowler. At this time, she had not long since arrived from Virginia, and the notes that survive of her conversations with garden consultant Norah Lindsay show that she was a keen student, with charmingly phonetic spelling. “Contoryaster” was cotoneaster and “paenys” gave a southern accent to peonies. A peony variety that she was keen to make a note of was “Duchess di Nemmus,” for Duchesse de Nemours. Norah Lindsay probably pronounced it at full tilt, being a busy woman. Norah’s notes for Nancy were “written in frenetic haste.” 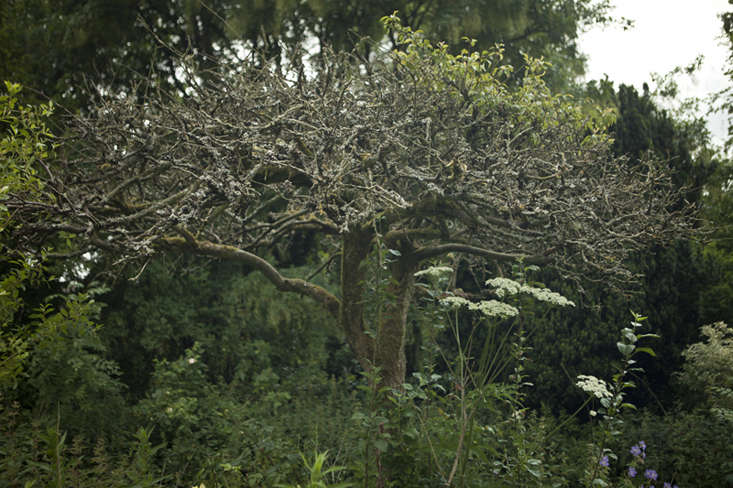 Above: Partly alive, a crabapple tree is formally pruned and a cornerstone of the parterre. Stationed on either side of the inner circle were box topiaries cut like seated teddy bears: one of Nancy’s few eyebrow-raising moments. She did have small children (Michael and Jeremy Tree) at the time.

When Nancy Lancaster (then Tree) lived at the Wilderness, she was busy refurbishing Kelmarsh Hall, just across the fields. Wilderness House was next to the farm, which formed part of the Kelmarsh estate. Nancy and her second husband, Ronnie Tree, were wealthy, discerning, and energetic Americans who rented Kelmarsh on a peppercorn rent, in exchange for refurbishment. Installing bathrooms and heating was only the beginning: as tenants, they were very good value. 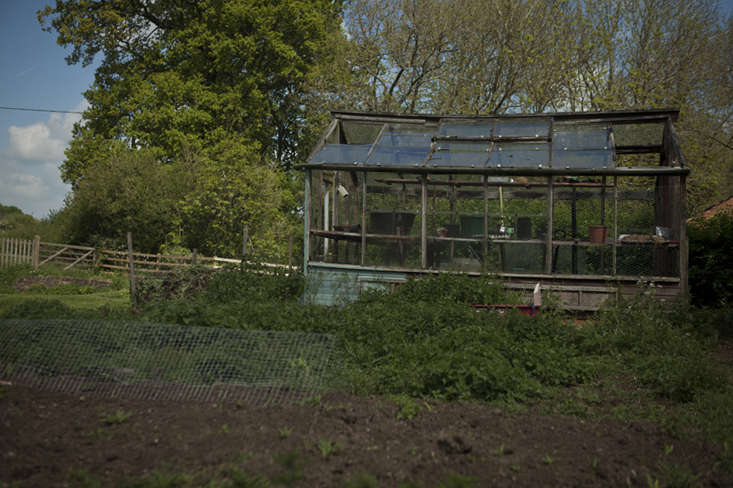 Above: The beleaguered yet efficient greenhouse, with panes of glass surviving here and there. We have planted a cucumber under a hole in the roof and tomato seedlings grow where they can also be rained on. Hydration in the garden remains an issue despite the stream, which becomes a raging torrent in winter. 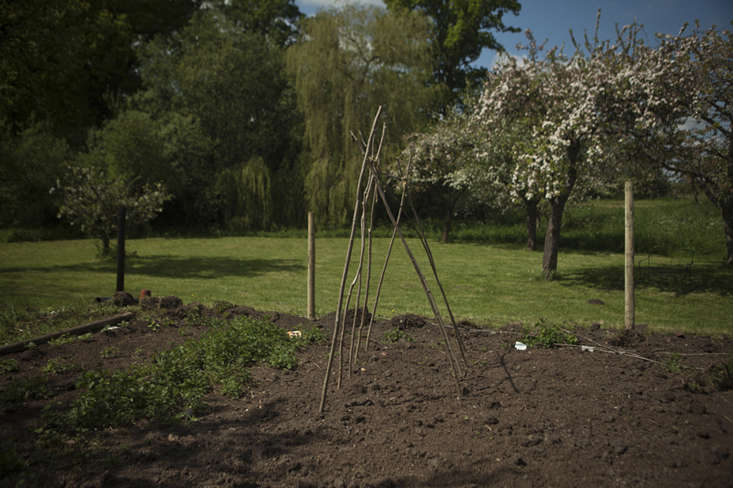 Above: The vegetable garden was compacted “like concrete” but has been improved by Annabelle’s au pair (she has been to a chiropractor). When the nettles went, the bindweed revealed itself. Annabelle and her husband, David, are growing several rows of potatoes, which are almost as efficient as pigs at clearing ground. 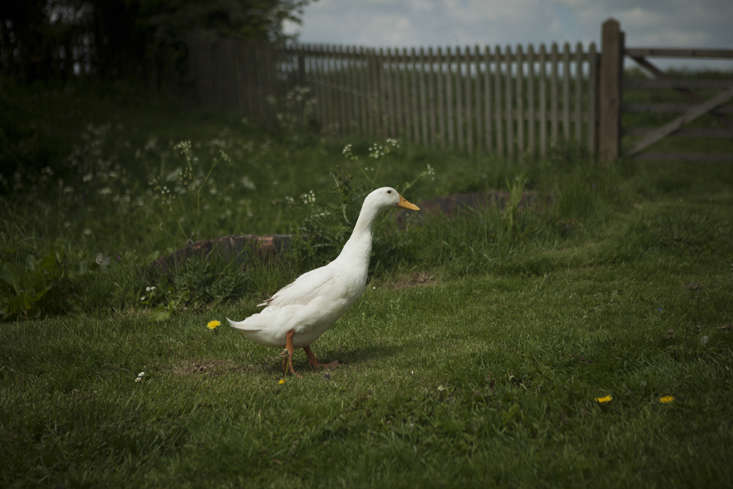 Above: Ducks and chickens come and go. Slugs are less of an issue than the gangs of chickens getting over the fencing around the kitchen garden and grazing on peas and cabbages, which they’ve already done. 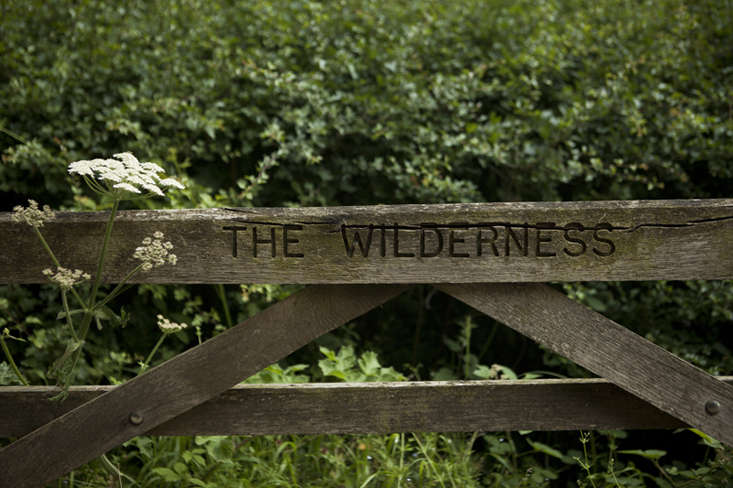 Above: The call of the semi-wild.

For more installments in this series, see: