On the surface, the bulk of labor in restoring Nancy Lancaster’s little-known garden in Northamptonshire is done. My friend Annabelle, who recently moved into the house the influential designer modernized nearly a century ago, has seen to that.

Blighted boxwood is gone, and the original lines of the 1920s parterre have been marked with pegs and twine. Because the layout is clear, the way ahead seems strangely simple.

“When can you give me a planting plan?” asks Annabelle, who has taken on a repair lease to restore the seven-bedroom house known as the Wilderness.

Annabelle had given up asking me for a planting plan, and was aiming this question at the respected gardener Phylip Statner, my friend who’d come over to have a look.

Phylip looks baffled. Why have a planting plan? Since this part of the garden is defined by its shapes, it’s crucial to get them sharpened and made more permanent. Perennials, shrubs, rose varieties can all wait. 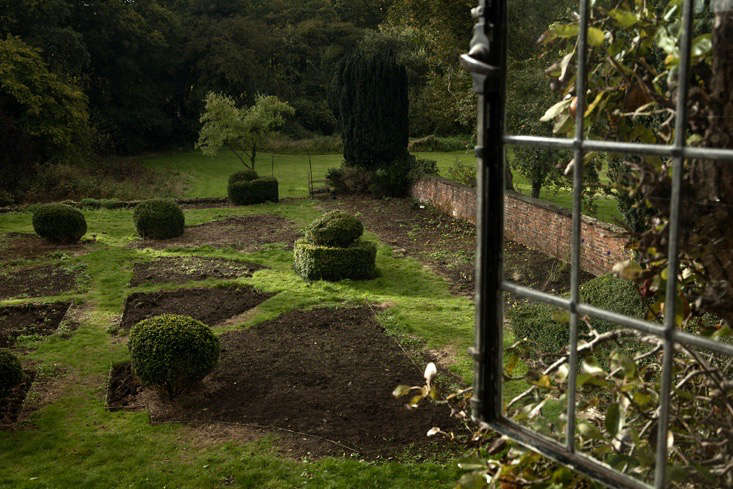 Above: The view from the upstairs hallway over the south-facing parterre, designed by Nancy Lancaster in the 1920s while she was deciding how to decorate Kelmarsh Hall, which lies on the other side of the fields.

The Wilderness is a dower house, i.e. the second-biggest house in a feudal village besides a rectory, traditionally intended for housing the widowed mother of the squire. The Wilderness was to become an overspill house for guests of hunting-mad power couple Ronald and Nancy Tree (later Lancaster). They had taken on Kelmarsh for a peppercorn rent and they decorated the spare house to a degree that was remarkable in its detail. 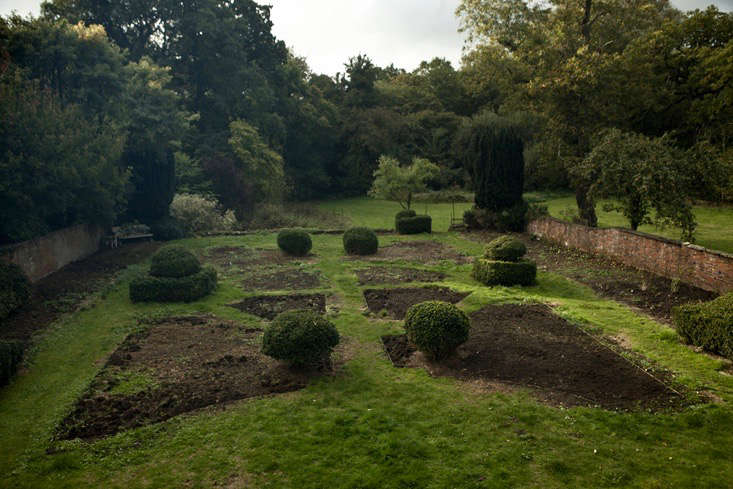 Above: The symmetrical layout is enclosed on three sides by  walls of brick, and the ironstone facade of the house. It’s difficult not to fall in love with this aspect, which leads down to a “wilderness” of mature trees and a stream. 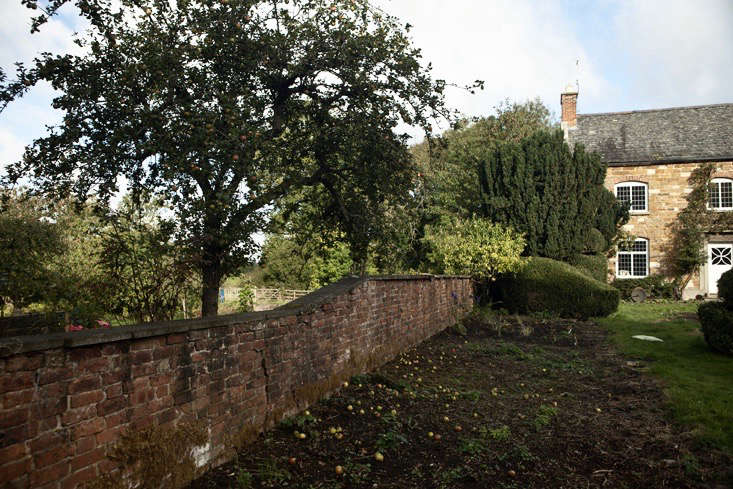 Above: The east-facing border, overhung by an apple tree from the orchard over the wall.

Nancy Lancaster had the gift of arranging space, and the structure of her garden at The Wilderness has been in good working order for 90 years. This essentially takes away the need for a garden designer. Annabelle and her husband, David, have a freedom with the planting which could be a joy, without the usual worries over layout.

Annabelle does not see herself as a gardener and is worried that her choices won’t live up to Nancy’s. She’s decided on colors however: pink and purple. No yellow or red. She has begun to buy things, and benefitted from the end-of-season sale at nearby Coton Manor (they only sell exquisite plants). “I’ve been buying plants just because I like them,” Annabelle nervously admits to Phylip, pointing to a small collection of perennials bedded in at the end of a long border. “And what’s wrong with that?” he asks. 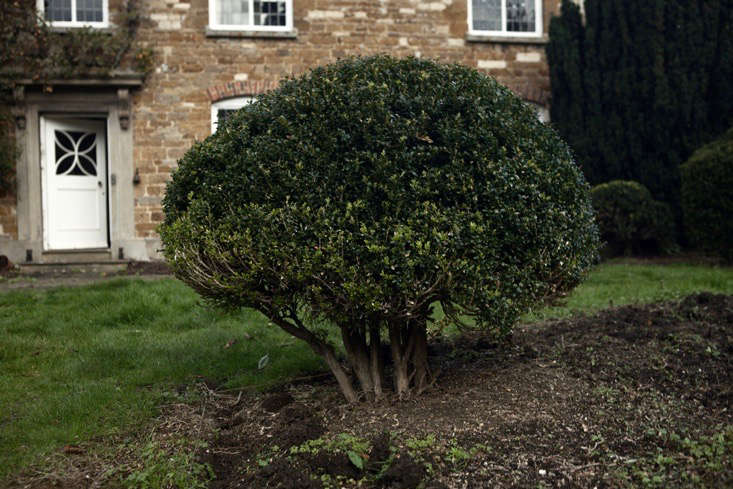 Above: Bigger clumps of topiarized boxwood have survived the blight that affected the smaller variety around the edges (Buxus sempervirens ‘Suffruticosa’, the most popular choice for parterres, is also the most susceptible).

It’s easy to be daunted by received wisdom in gardening: what you think you should be doing versus what you want to do. Admittedly, this historic garden belongs to a trust, but their main interest is in seeing its collapse halted. No one has said that we need to turn the clock back. 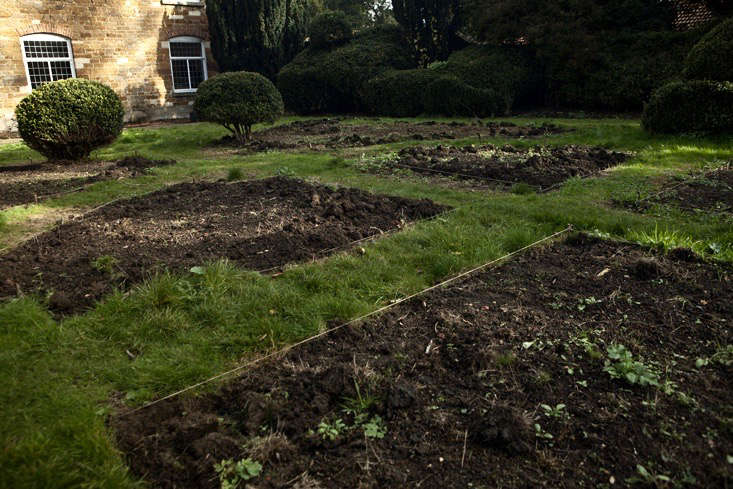 Above: Annabelle has energy to spare, even after seeing to the needs of her own four children and running a curtain business. She thinks nothing of feeding and housing extra people and has had a stream of garden helpers all summer, who have come to England on a Workaway scheme. The Italians and the Texan cleared; the Germans measured and marked out (and cleared). I have been notable in my absence.

The lines need to be engraved into the parterre, instead of being vaguely indicated by box. Manmade lawn edging is one approach. Then there is the question of a living enclosure. “I’d think seriously about the need for any hedging at all,” says Phylip. “Better to take the essence of Nancy’s style without constraining yourself by it.” 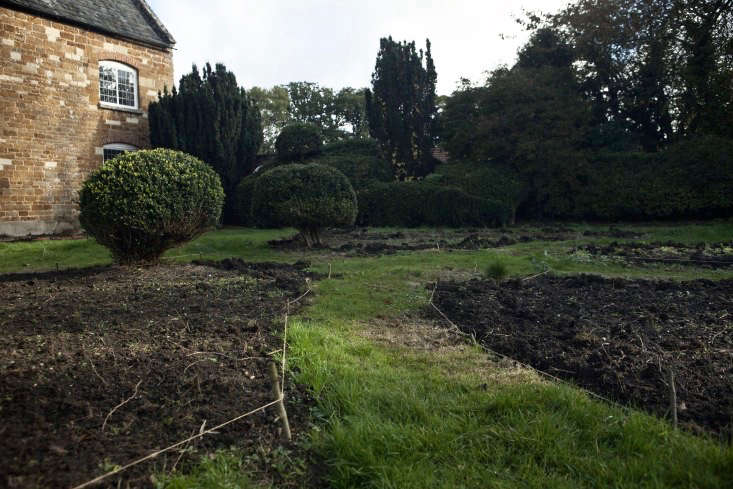 Above: Edging for the 21st century: what would Nancy do?

The soil in the main parterre looks remarkably clean, considering that until recently it was home to hogweed and a small forest of opportunist trees. The spade doesn’t go in too well and a similar prod in the long borders reveals what I’d feared: spaghetti coils of bindweed lurk beneath the surface and the parterre is stuffed with long tap roots of noxious weeds as well as tree stumps.

“It looks as though you need a season of spraying off.” says Phylip. This has been happening all spring and summer, by other people. “You may need another,” he adds. “Clearing, dull as it might be, is the first job.” 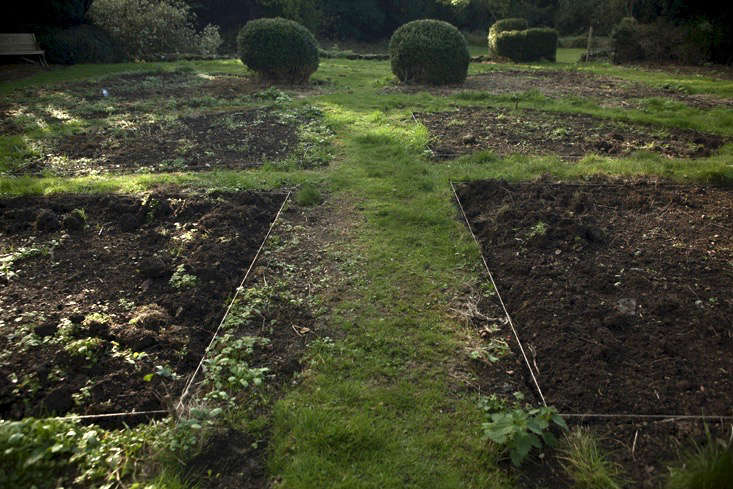 Above: The soil is essentially good, after decades of meticulous maintenance, before a slip at the end.

Phylip doesn’t know Annabelle: she likes results—now. He continues: “Growing plants from seed would be truly worthwhile. It would also give time to properly clear the site.” Annabelle isn’t going to like this part: “You might even be able to plant out the new plants next autumn.” Another year of no pink and purple? 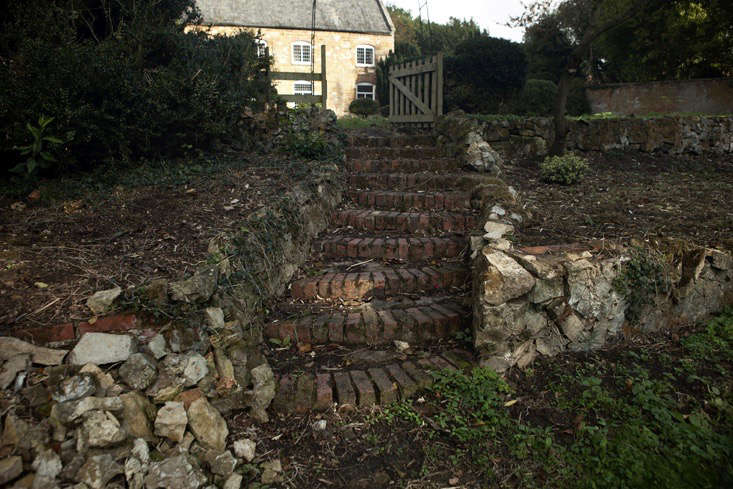 Above: The brick and earth stairs (all the better to infill with creeping thyme) lead from parterre to “wilderness.” Two holding walls are built with brick. which is clad with Northamptonshire stone. Some of the stone is now falling away; I’m not sure that the brick needs to be disguised. 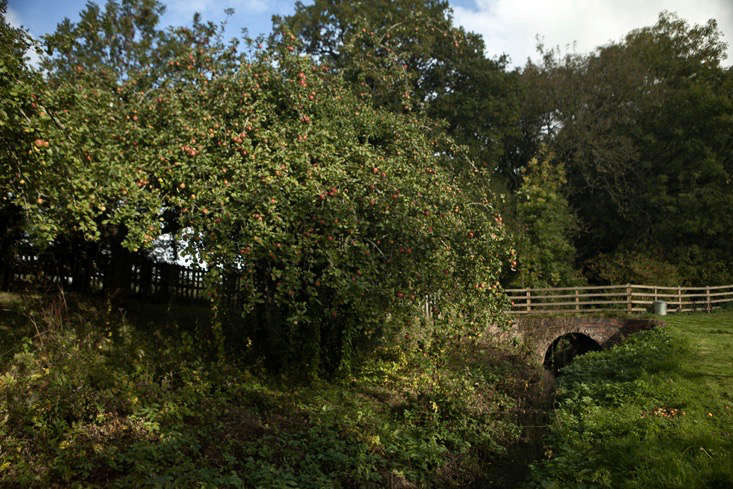 Above: The informal lawn that meets the steps wraps around the side of the house. The River Ise runs through the middle of the garden, dividing grass from woodland. An orchard straddles the water, being more manicured on one side and hung about with ivy on the other. 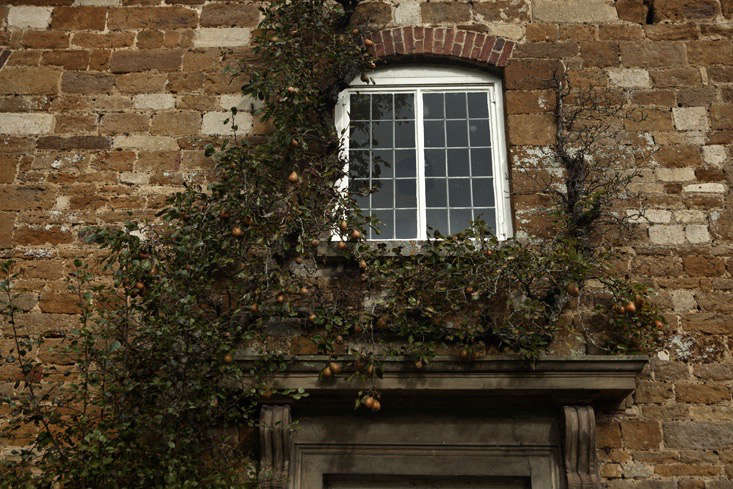 Above: Remnants of Nancy’s pears planted around the door and windows of Wilderness House. When trained flat against a house as espaliers, pears provide a more robust framework than roses and are more interesting. There is early spring blossom and later, the opportunity of leaning out of the window to pick fruit. 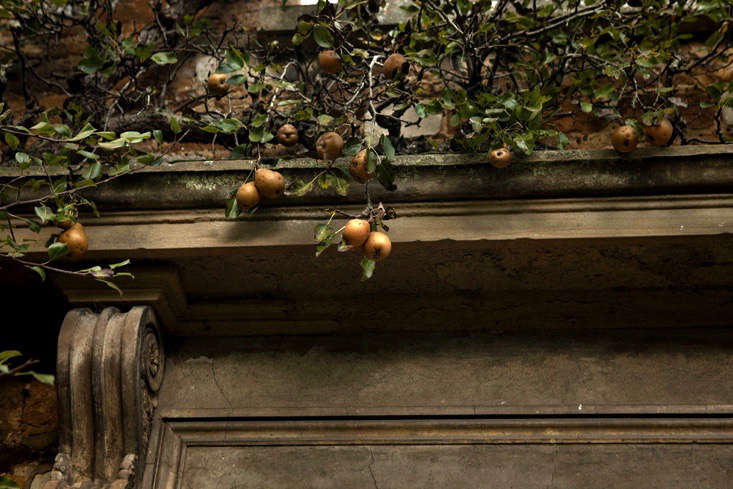 Above: Pears also have that other Nancy Lancaster ingredient in abundance: romance.

N.B.: See the earlier installments of this series:

Save the Date: San Francisco & Portland, OR, Holiday Markets