For nine years I gardened on a sliver of terrace at the top of a townhouse in the leafy Cobble Hill neighborhood of Brooklyn. That sunny space was small, and I needed so much:  flowers, herbs, fruit, a charcoal grill; my requirements for sanity.  You could not move on it without bumping into something, but I was happy.

Then our landlord sent our Brooklyn rent into the stratosphere. We had to move. My husband and I searched for two months for the right kind of outdoor space–rare and expensive in this city. One day my husband, Vincent, spotted an ad I had overlooked on a weekly email we received from the Listings Project, a humane list of rentals, predominantly for artists who need studio space, but with some apartments thrown in. The minute I saw the picture of the deck, taken from above, I was hooked. 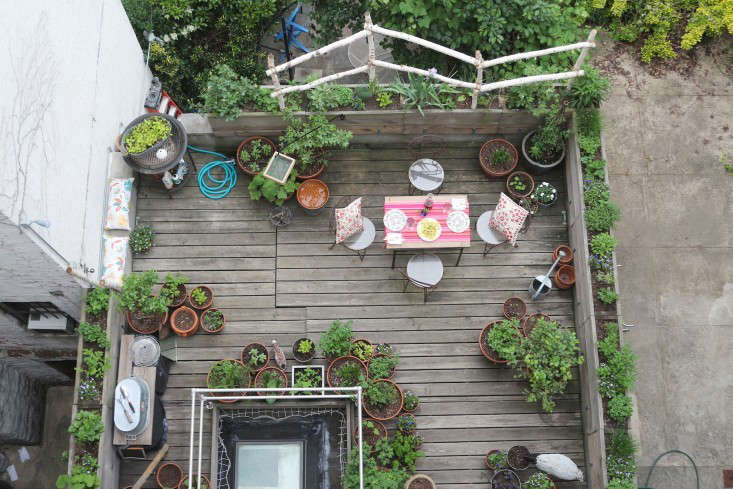 Above: Marie Viljoen’s deck garden in Harlem (as it looks this week).

We arrived early for the showing, with a check in hand for three months’ rent. We had a spoken code–what we would say to each other if we liked it enough to produce the check. What we would say if we didn’t. One look at the sunny bedroom and its cathedral ceilings, with the deck a step up from it, and my husband uttered the code: “I really, really like it.”  After some weeks of formalities and anxiety, the place was ours.

In early fall, at the end of the growing season, our black cat, Vince, and I piled into a sewing machine-sized Zipcar and followed the moving van that contained our belongings and all my terrace plants across the Brooklyn Bridge and north, into Manhattan.

Above: Record snowfalls covered the Harlem terrace in winter.

You think I’d have been wildly happy to move to a terrace four times the size of the old space, and into an apartment where we could fit that old apartment three times.  But the transition was bumpy. Winter was long and very dark. The apartment was a lot noisier than we had expected. And New York was buried in record snow.  I didn’t see the terrace for months.

Above: Waiting for spring in Harlem.

What we gained in cathedral ceilings on our parlor-level apartment, we lost in light. We went from being top floor sunny skylight people to bat cavers. The Harlem townhouse is squeezed by taller buildings to the east and west, and in the south another building–a homeless shelter, as it turned out–cut off the low winter sun.

And wow, it was cold. The heating bills from the newly installed electric heat gave us palpitations. And somehow, we skipped April.

Above: Winter daydreaming: seeds for spring.

I shivered. I nearly lost my mind. Mentally, I bonded with suicidal Norwegians. To stay sane, I shopped for seeds online, and plotted what lily bulbs to plant where. I wondered how much summer sun the terrace would receive.

After the snow receded, it was clear that the climbing Iceberg rose, two shrub roses, the fig that had overwintered outdoors for years, and my trusty green boxwoods had given up the ghost. I had to start over, without spending too much money (those heating bills…).

Above: The fava beans are thriving in May.

At night while my husband slept, I ordered fragrant and statuesque flowering tobacco plant seeds–they would give me cheap height and impact. Nasturtiums: uncomplicated flowers and excellent and healthy salad greens. Fava beans, whose tender leaves I find so rewarding every spring and fall, and they can take some shade. I ordered climbers–purple runner beans, scarlet runner beans, lablab beans, Gloriosa lilies, anything that could climb up a makeshift screen to give us the sense of privacy we had lost. I ordered cat grass for the cat.

Above: Pansies and chives in May.

I nicknamed our new terrace The Goldfish Bowl: we went from total, top floor privacy to lights, camera, action. We are surrounded by windows. You can have no secrets. The first time I lit the charcoal fire for a barbecue, it brought people to every one of those windows, ready to dial 911 as the flames leaped. I poked the fire nonchalantly and pretended not to notice. The homeless men’s shelter just south of the terrace made me deeply self-conscious. The juxtaposition of the haves and the have nots felt excrutiating.  Me sipping my evening cocktail, deadheading the pansies.

As soon as the soil in the built-in planters that form the sides of terrace had thawed, I ordered birch poles online to construct a screen in name only. I didn’t want a stockade, but I did want a suggestion of separation. I sank the 6-foot uprights into the planters and tied on cross pieces with strong twine. The beans and the Gloriosa lilies are planted at each post’s base, and are already reaching upwards. The white birch looks good against the faded planks of the terrace and planters.

Above: A survivor: the blueberry bush.

And among the dead there were survivors. The blueberry bush was visited by local bumblebees, and is loaded with more berries than ever before. Either it likes the hard pruning I gave it after fruiting, or the fresh coffee grounds I use as a mulch. Or perhaps Harlem bees are better. The black raspberry has lots of green fruit. The two surviving roses are fat with buds. The narrow built-in planters are stuffed with my former terrace herbs, tough customers: chives, thyme, sage, oregano. The strawberries made it, too.

I was the recipient of gifts. Michael Marriot, the rosarian at David Austin roses, sent me five roses, recommended for the new light conditions (I’ve gone from full sun to four hours and a bit, in the middle of the day): Abraham Darby, my longtime favorite, pink and gorgeous-flowered; Munstead Wood, a spicy red; Darcy Bussell; Boscobel, and Teasing Georgia, all new to me. They arrived bare root and stricken, but have produced healthy shoots and tiny buds, sometimes plagued by aphids, which I squash.

Above: A blueberry bush flowers.

My friend Paul Westervelt, the nursery manager for Saunders Brothers Wholesale Nursery in Virginia, overnighted me three Clematis ‘Roguchi’, to plant under the birch pole screen. They have blue nodding flowers like bells.

Above: Parsley, a tough customer.

Trips to farmers’ markets have yielded new edibles like New Zealand spinach and Talinum, a pretty weed I grew up with, but whose leaves are a good cooked vegetable. I have added fennel for height and parsley, basil, mint, and marjoram for the cooking to come.

I love the birds that visit the small garden–juncos came in the snowy days and left birdprints on the icy crust.  I bought a feeder for them which now attracts a crowd of pretty red house finches who sing like canaries. There are mourning doves and robins, and at 3 am there is a demented mockingbird that wakes up 127th Street.

Above: Dinner on the terrace.

I have learned about the light. The sun arrives at noon and leaves at four. No one panics anymore when I light fires. My plants are growing (May helps). There are flowers and meals to come.  And I have enough mint for a million mojitos.

Wondering what Marie left behind in Brooklyn? For her Cobble Hill garden, see 10 Secrets for Growing an Urban Balcony Garden. For recipes from her edible garden, see 66 Square Feet: A Delicious Life.