When rug weaver and textile designer Elizabeth Eakins and her lawyer husband, Jerry Wigglesworth, bought a farm on the Kansas prairie, he went back to school to learn to be a sheep farmer and she wanted a weaving studio.

Brooklyn-based architects Vrinda Khanna and Robert Schultz of Khanna Schultz designed a loom house for Eakins,  a lofty studio that doubles as guest space and complements rather than competes with the property’s main building, a limestone farmhouse built in the 1870s.

A mix of old materials and new ideas, the loom house has passive solar panels, recycled floor planks, and reclaimed bricks on the front stoop. With its steeply pitched roof and architectural details typical of the Tallgrass Prairie, the weaving studio looks as at home on the property as the sheep. 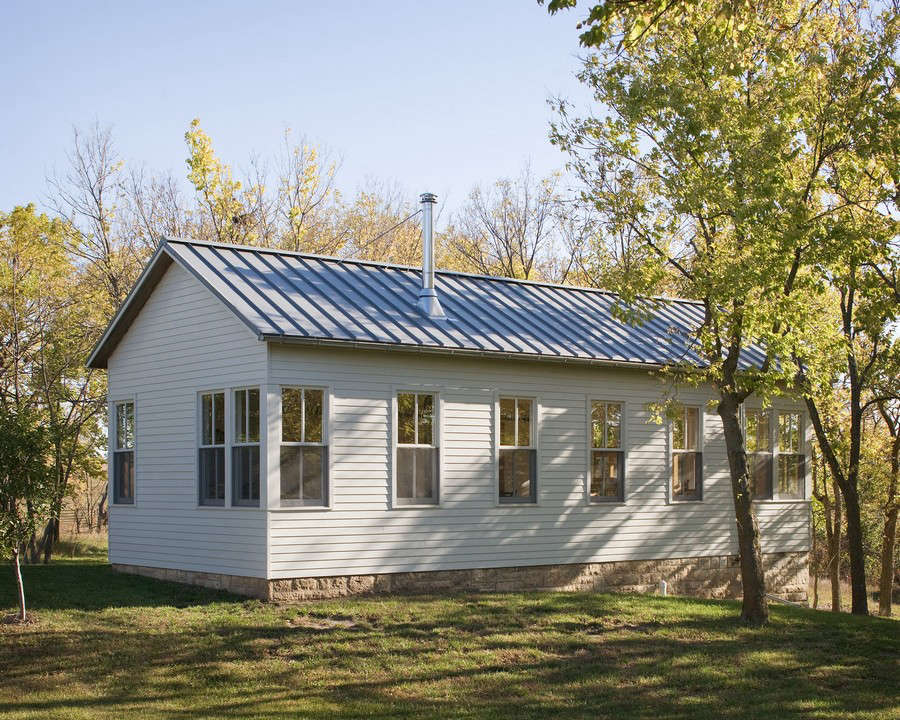 Above: The loom house is 50 feet away from main house. “Choosing a site was a big part of the process,” says Schultz. “Both the winters and summer are very harsh in that part of Kansas, so we wanted it to be not too far from the main house.” 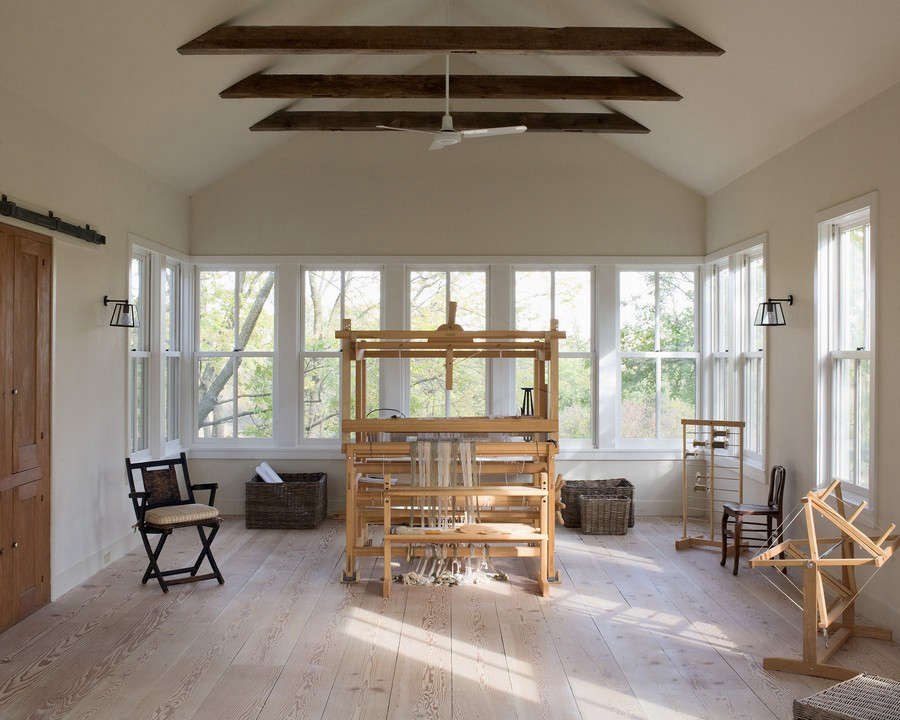 Above: Inside the loom house Eakins has a spacious weaving studio and a view of gently rolling meadows in a shallow valley that drops away from the building. 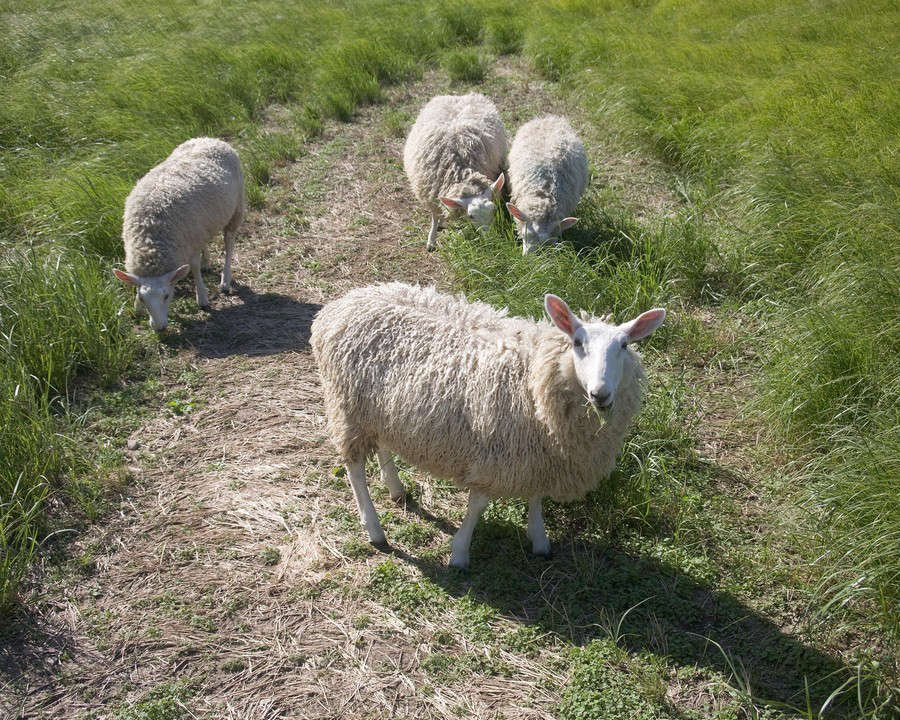 Above: Eakins and Wigglesworth have 100 long-wooled Border Leicester sheep. 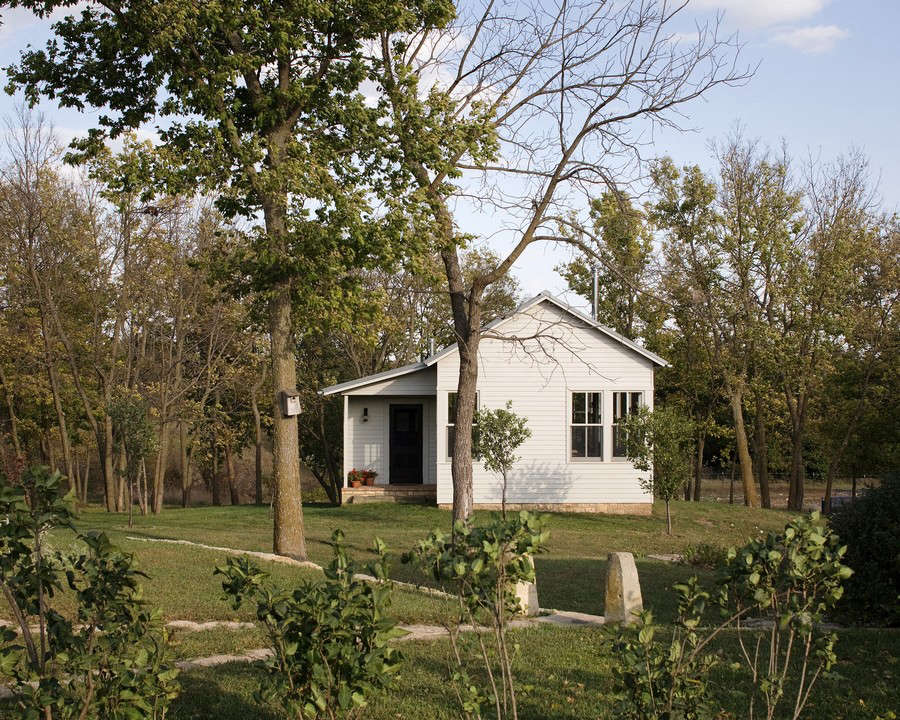 Above: The view from the main house is of the outbuilding’s front porch and entryway. The loom house is covered in painted white clapboards and has a zinc-coated aluminum roof. 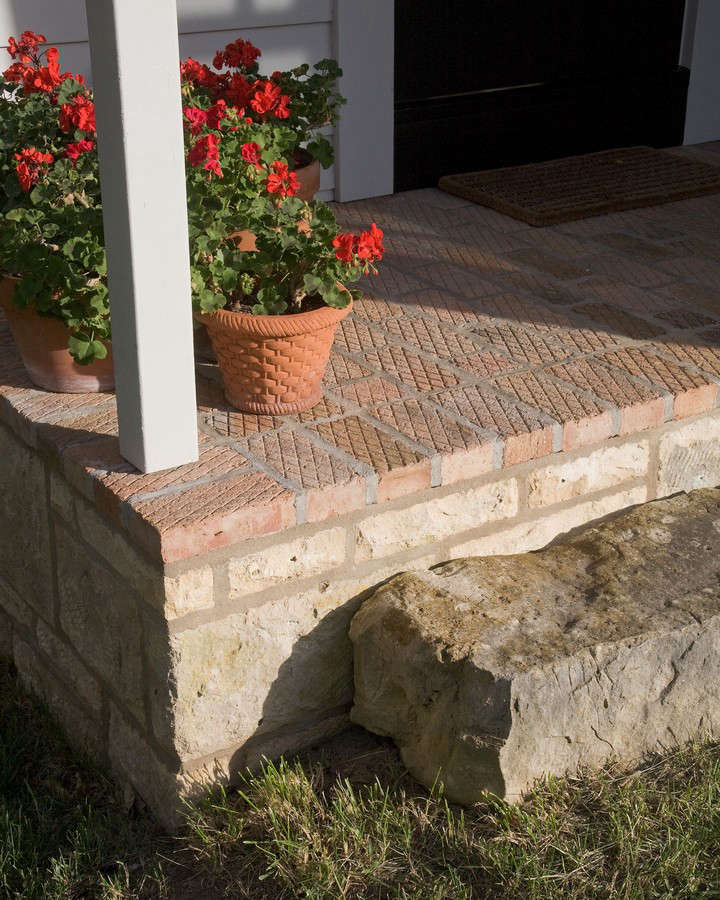 Above: The large limestone step was found on the property. The bricks came from a local salvage yard. “We wanted the building to reflect the small-town vernacular in Kansas, so the first time I visited, we looked around a lot of little towns,” says Schultz. “This is in an unspoiled part of Kansas and we saw a lot of interesting buildings.” 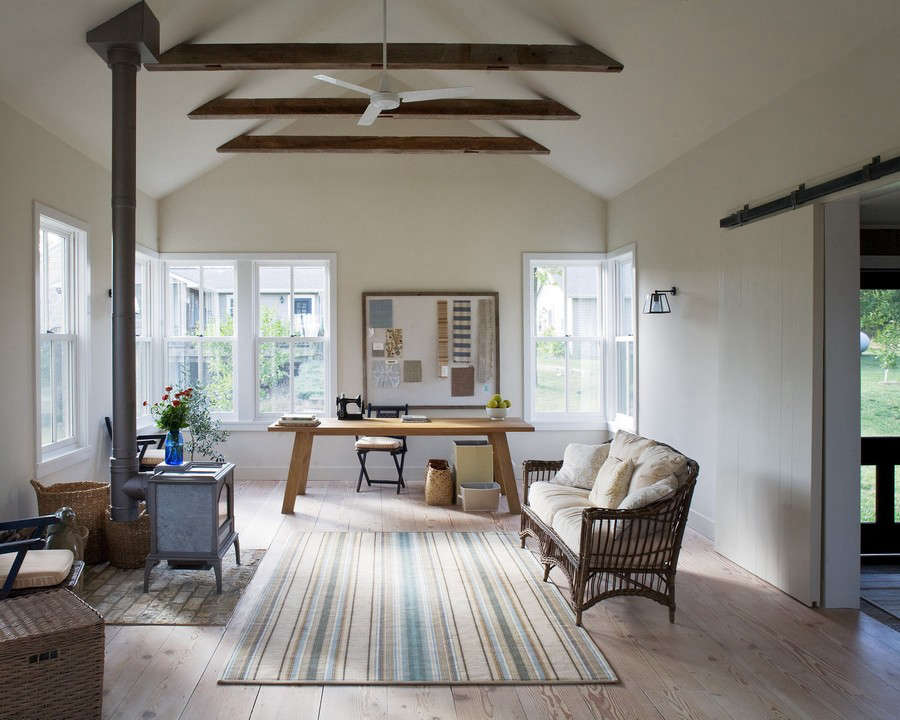 Above: A wood-burning stove is the studio’s heat source in winter.

The ceiling beams are recycled, as well. “There was an old barn on the property, but it blew down around the time the clients bought it,” says Schultz. “They salvaged its exposed beams for the weaving studio.” 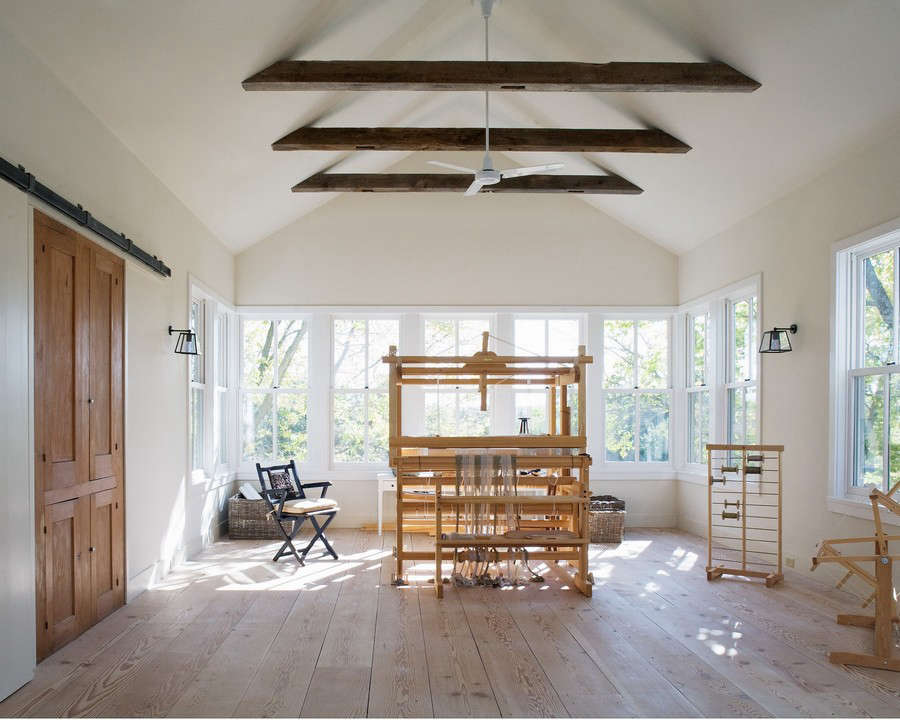 Above: Behind a sliding barn door is an alcove with a Murphy bed, enabling the studio to do double duty as a guesthouse. 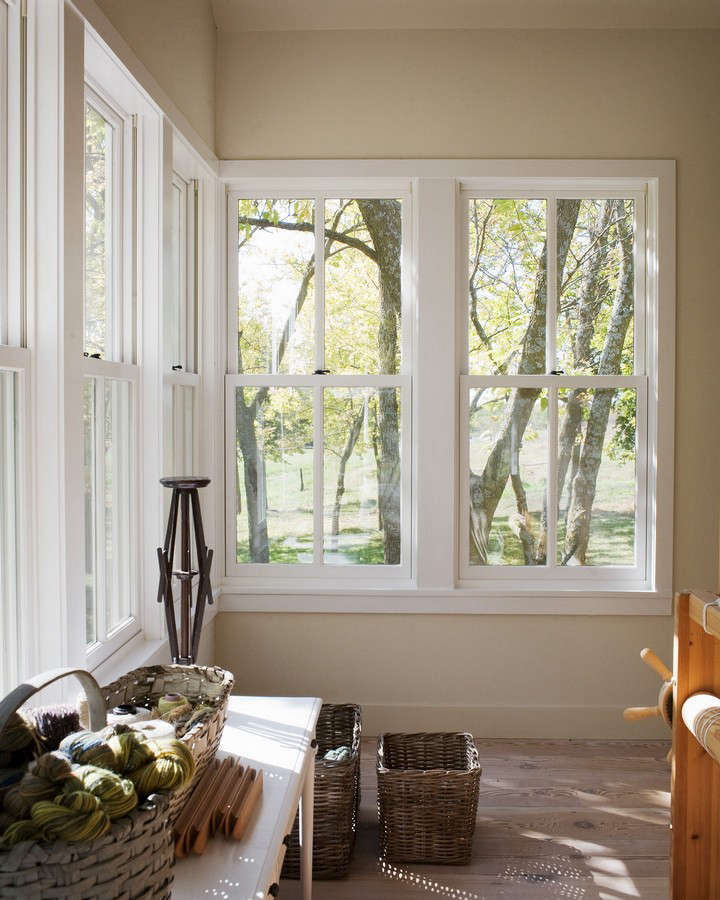 Above: Throughout the house are double-hung, two-over-two Marvin windows. “The same window, in the same size, is used everywhere but in the bathroom because we wanted to keep a very controlled design vocabulary,” says Schultz. 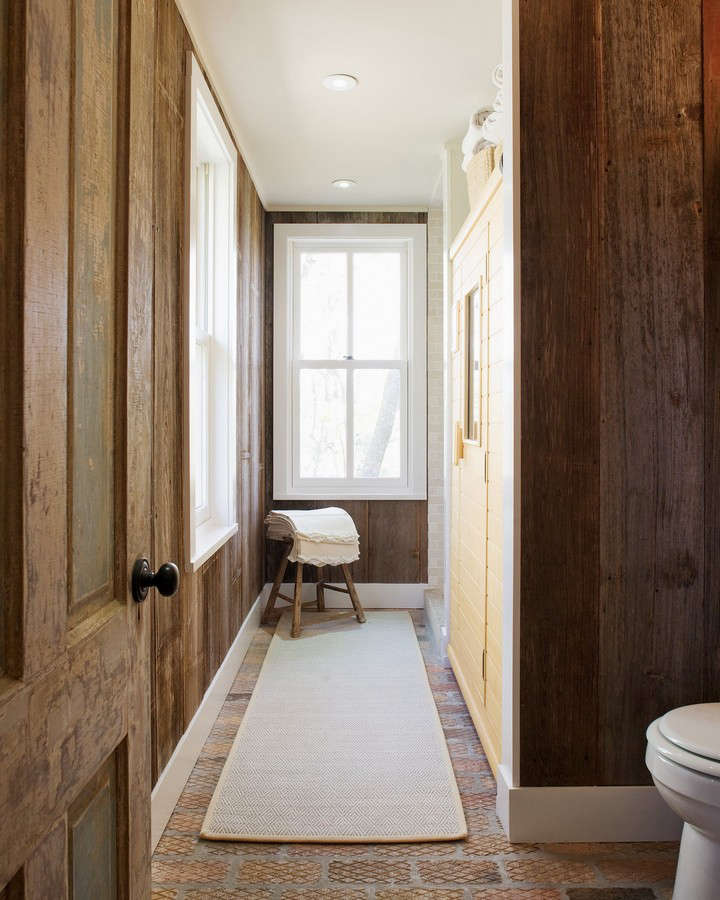 Above: Wood boards in the entry and bathroom are from the old barn that blew down. 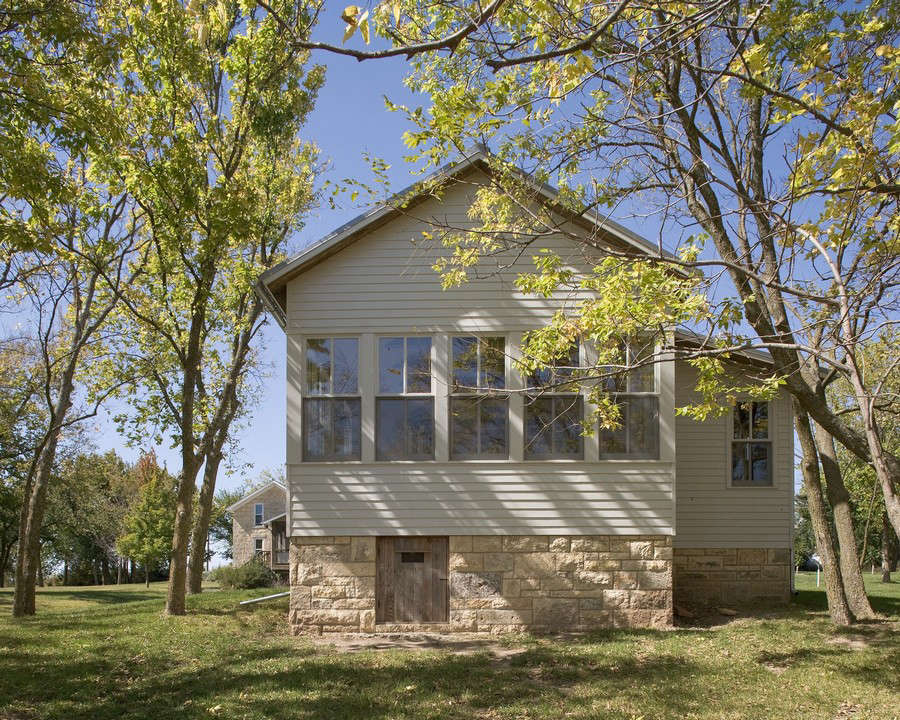 Above: A limestone foundation, made of local stone, also references the design of the main house (visible in the distance). 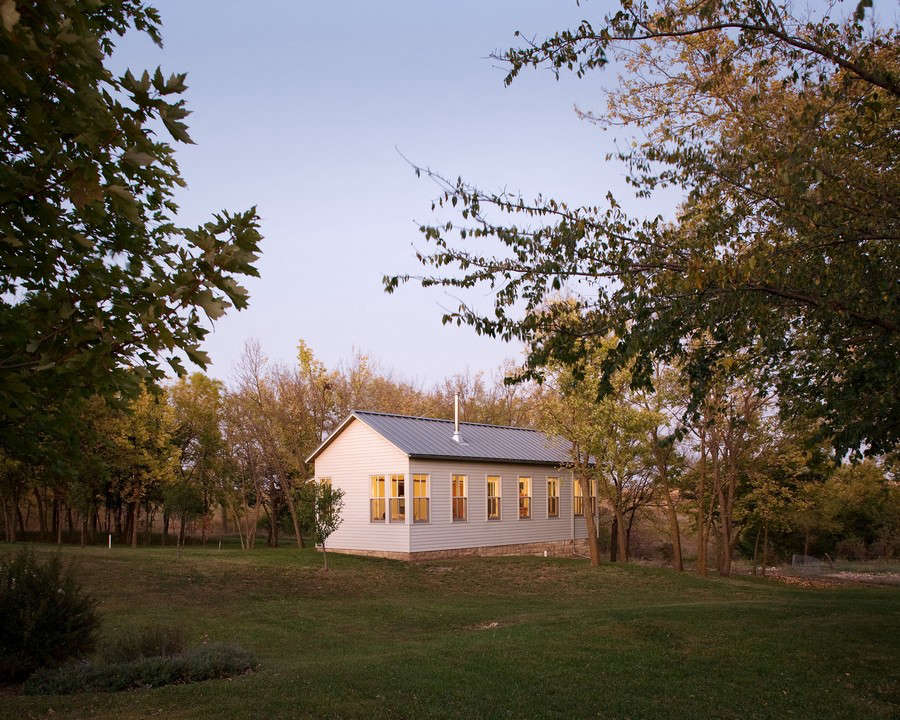 Above: The loom house sits in a grove of deciduous trees. In summer, their leaves provide shade and in winter, after the leaves fall, they allow a lot of sunlight into the building to warm up the space.

For more of our favorite farm buildings, see: