After hunting in vain for a simple hanging bottle vase that was as affordable as it was delicate, I took things into my own hands.

Armed with dark annealed wire and a multipurpose tool with wire snips and needle nose pliers, I designed a simple hanger that can be adjusted to fit just about any bottle you have lying around (I used a bottle I already own).

Follow the step-by-step instructions below for making your own hanging vase for a fraction of the cost of store-bought versions.

Photography by Erin Boyle for Gardenista. 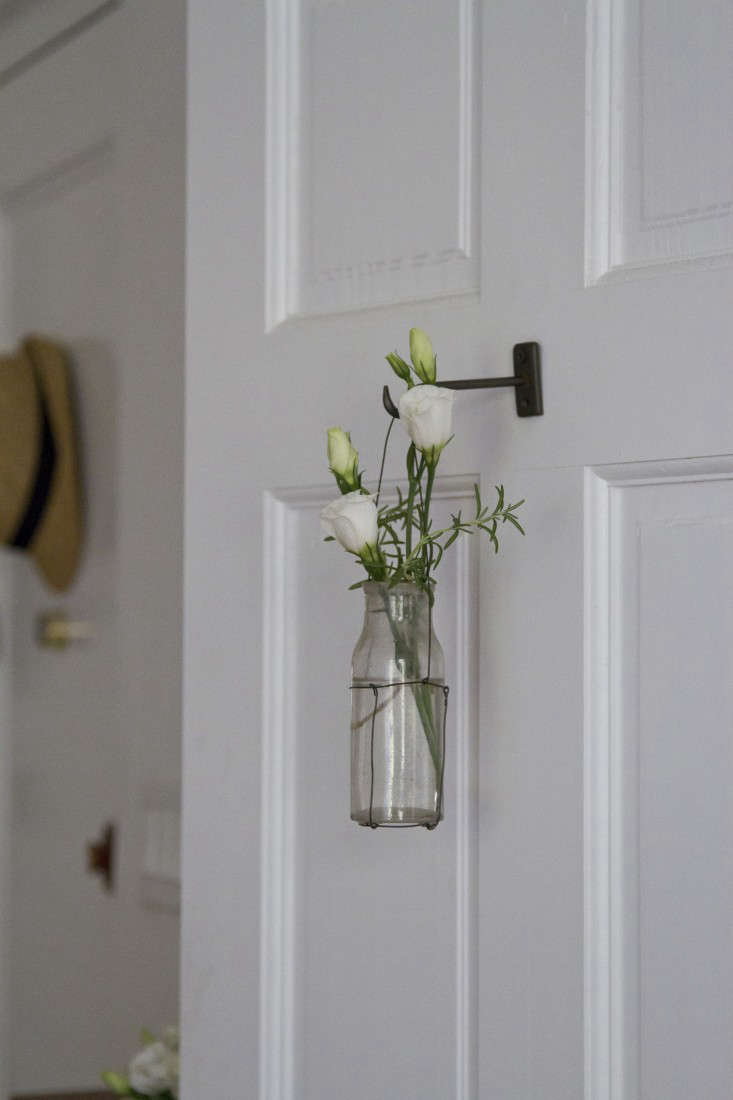 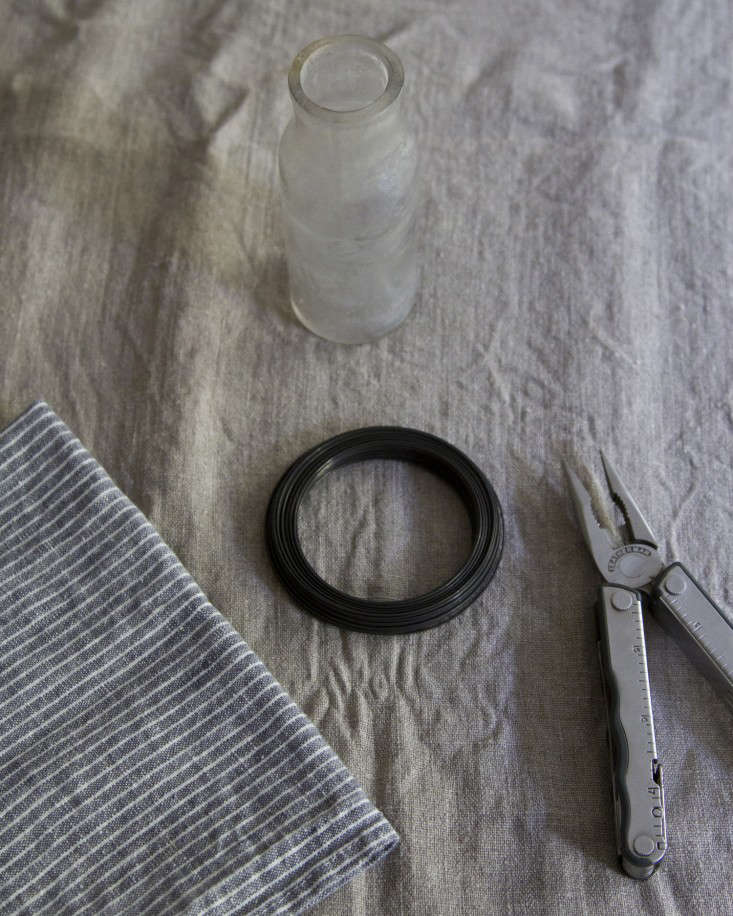 Above: The secret to the understated look of the wire hangers I’ve admired is dark annealed steel wire. I used thin, 20-gauge wire for a delicate look. (N.B. When you shop, remember that the larger the gauge, the thinner the wire.) 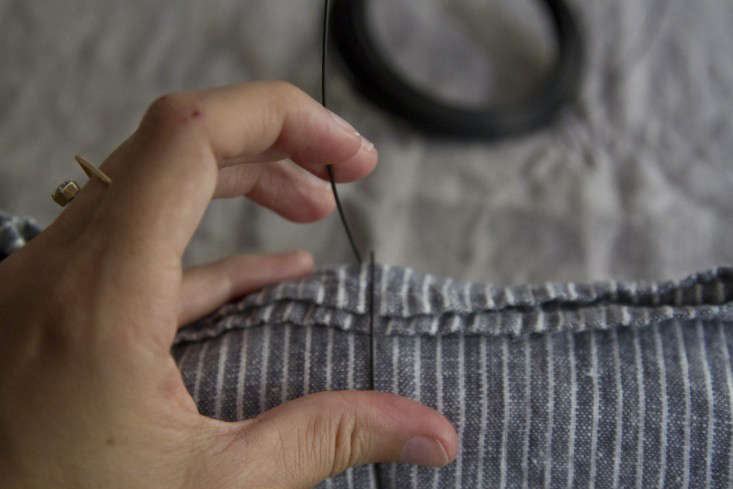 Above: To begin, I bent the wire into two circles–one to serve as the base and the other to support the mid-section of the vase. To make the circle that would support the vase in the middle, I wrapped my glass bottle in a cloth napkin to make sure the main circle would be slightly larger than the diameter of the vase. 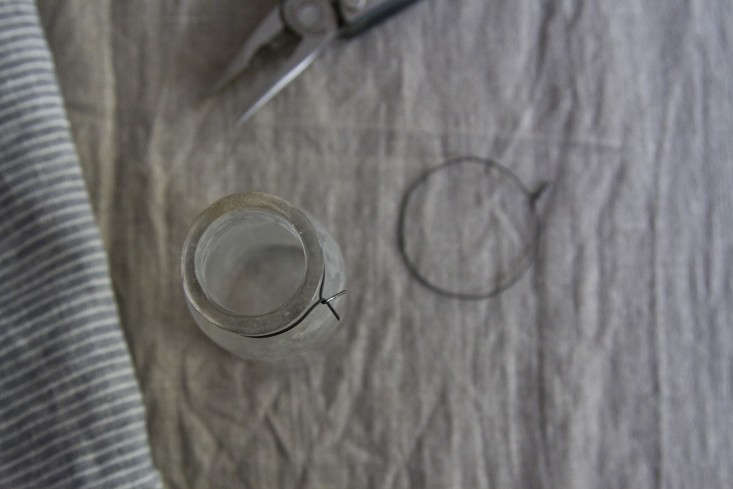 Above: I used the neck of my bottle to form a second circle. This circle supports the bottom of the vase, so I made sure it was a smaller than the base of my bottle. 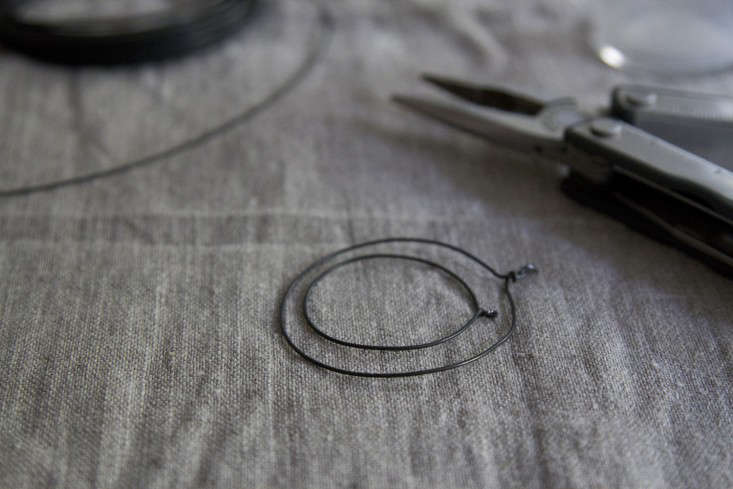 Above: I used the needle nose pliers to twist the two ends of the wire to form a circle and then slipped them off the bottle. 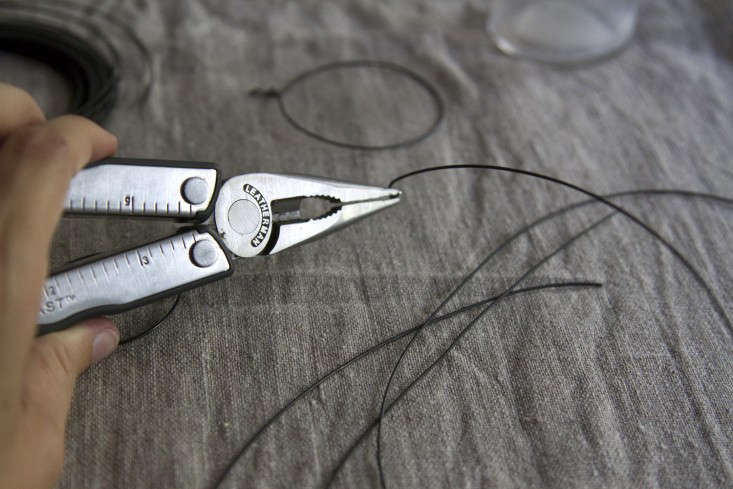 Above: Next, I cut four strips of wire and used the pliers to bend smell crooks at the base of each wire. (N.B. When handling the wire, try your best not to bend it in places where you’d like for it to remain straight. It can be tricky to unbend neatly.) 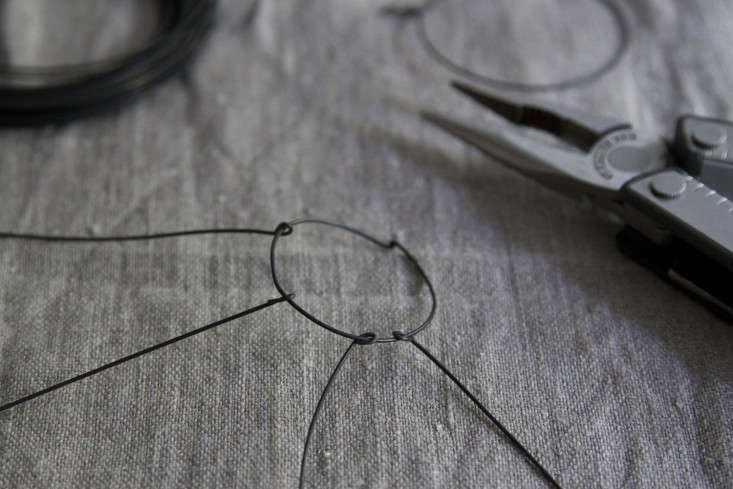 Above: I attached each straight piece to the smallest (base) circle and clamped each crook closed with the pliers. 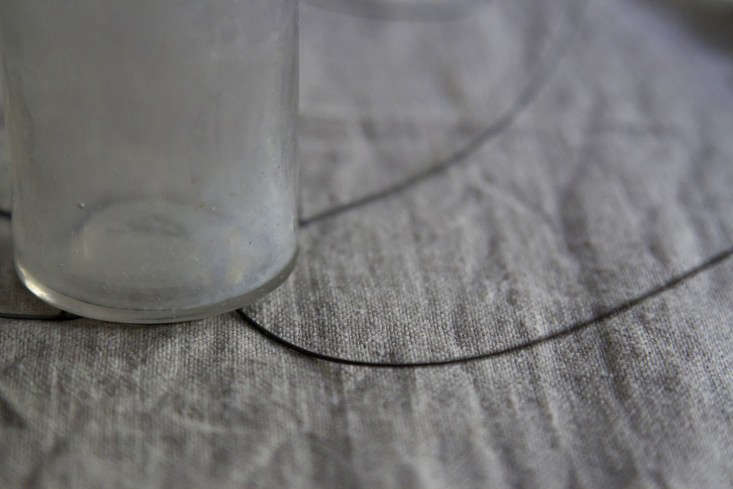 Above: Next, I placed the vase on top of the smaller base circle and spaced the four straight wires at equal distances apart from one another. 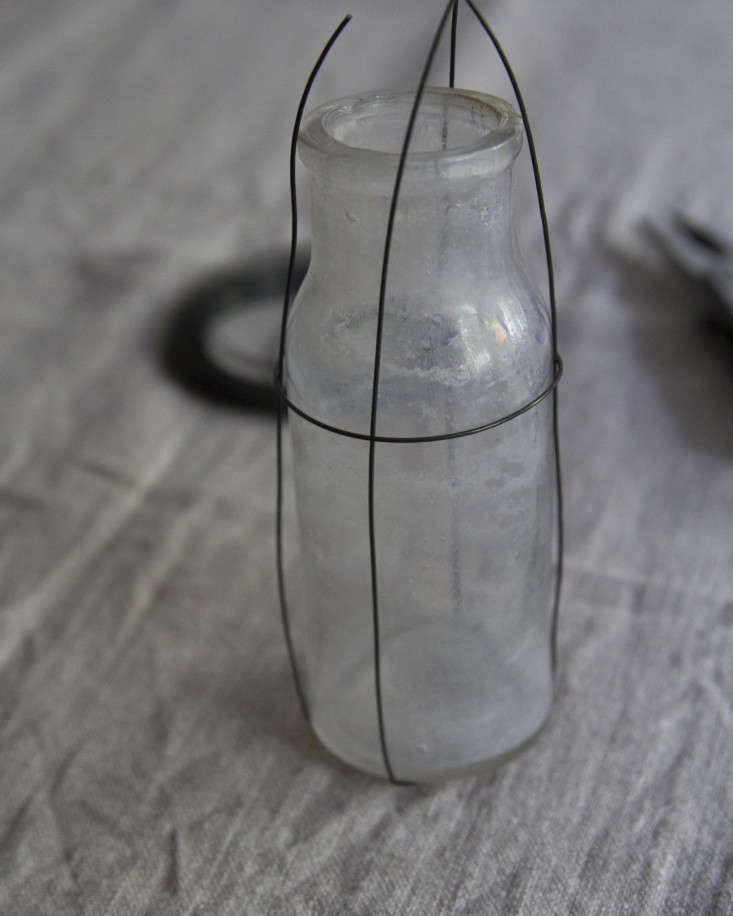 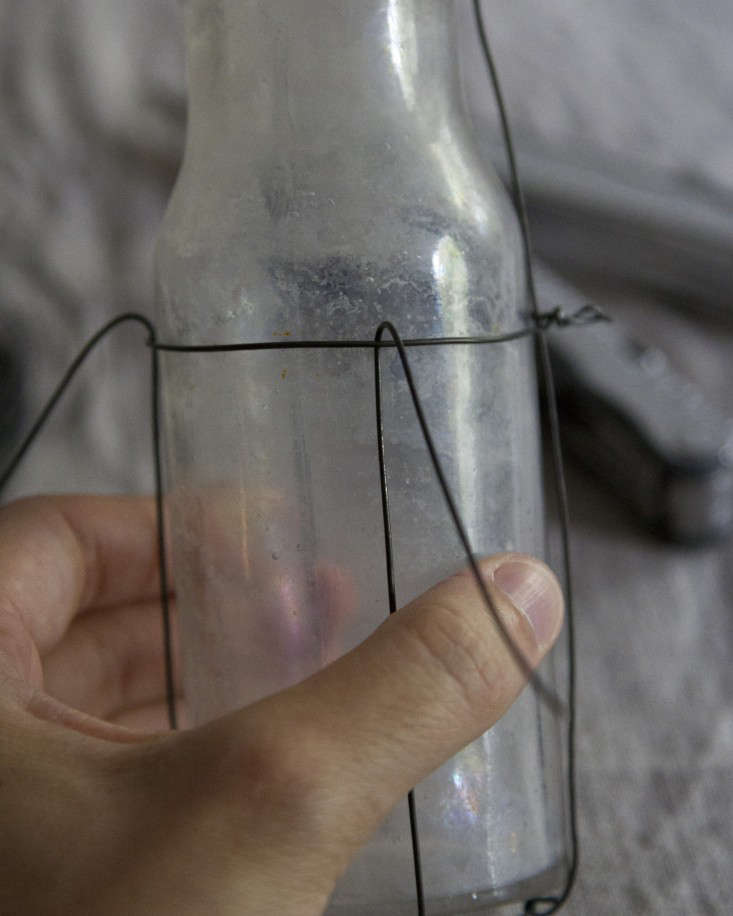 Above: Taking care to keep the top circle level, I gently bent each upright wire down over the middle circle as shown. 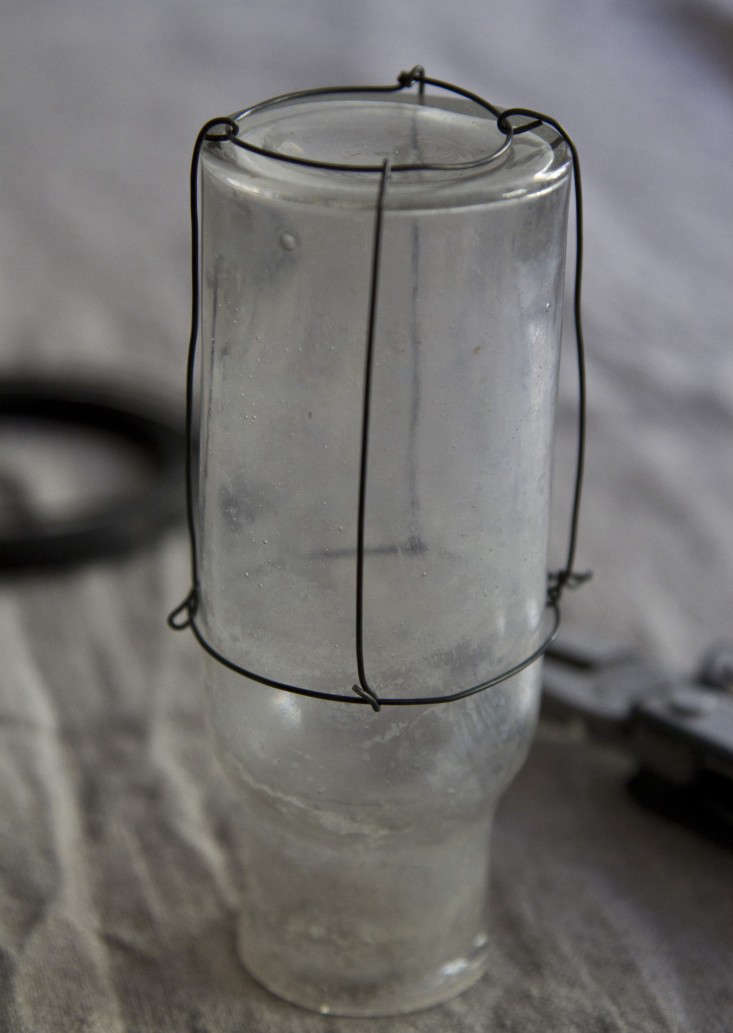 Above: I used my pliers to twist a second crook around the middle circle and snipped off any remaining wire. I found it easiest to do this step with the bottle flipped upside down. 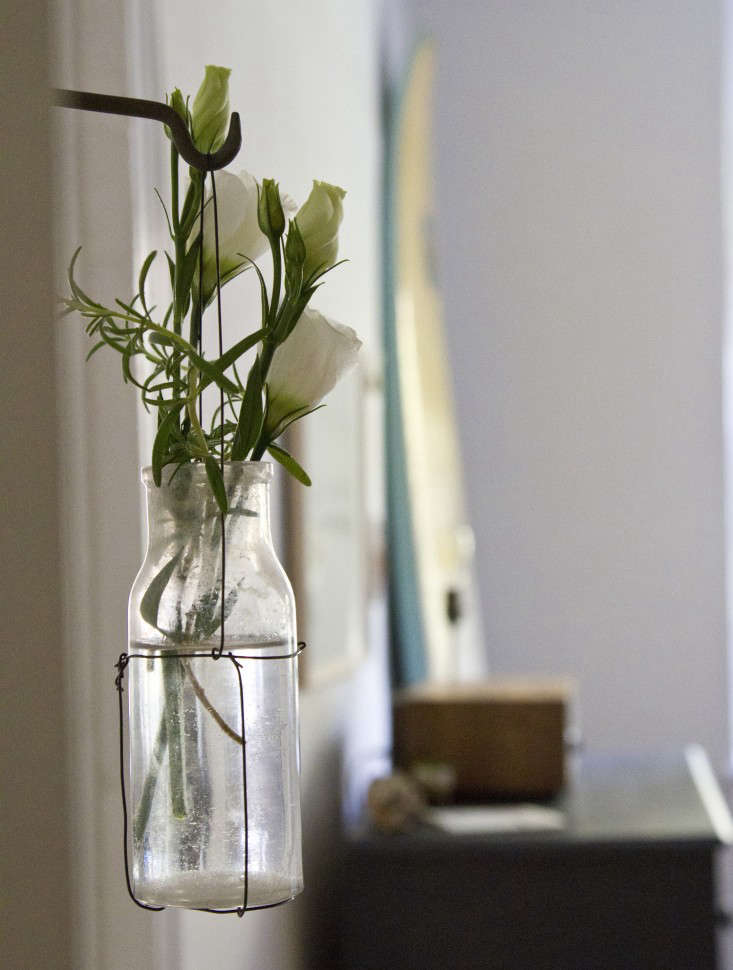 Above: Next, I attached a simple handle using the same bent crook method. 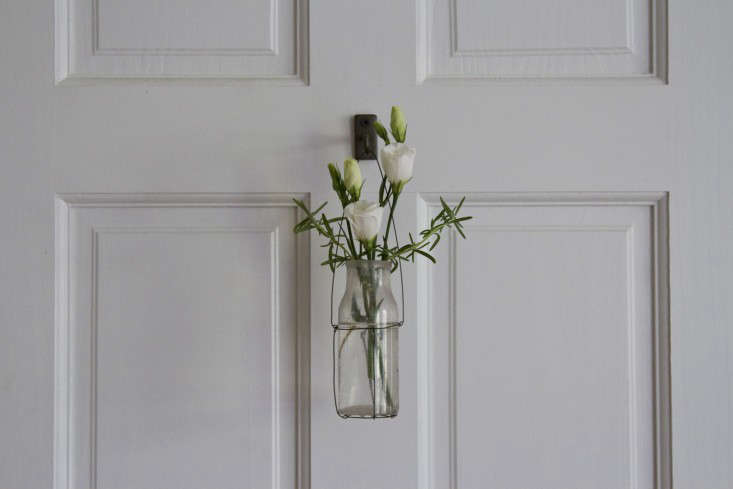 Above: Hung from my bedroom door with a Wrought Iron Wall Hook ($6 from Brook Farm General Store), the finished hanger has just the simple, elegant look that I was hoping for.

Not up for a DIY version? See 10 Easy Pieces: Wall Vases. For a larger take on the wire frame DIY, see Alexa’s DIY: Kousi Lamp by Mark Eden Shooley on Remodelista.

Outbuilding of the Week: A Prairie Loom House for Weaver Elizabeth Eakins

Trending on Remodelista: The Artist's House

by Michelle Slatalla
May 9, 2018
Read all recent posts