As leaves turn color and sweaters are unpacked from a long summer slumber, I begin to thrill with the anticipation of an unusual crop whose harvest is timed for shorter days and blacker nights: Myoga ginger buds. Not only are they a delicacy (and challenging to source as an ingredient), but they are produced on a ginger that is relatively cold-hardy, and that grows very happily in a pot on my city terrace. It’s also best friends with those other autumn crops, pears and apples, on a plate.

Zingiber mioga (commonly known as myoga) is native to the cold valleys and slopes of East Asia, and can be grown year-round in-ground down to USDA growing zone 7 (at least, officially: Other sources have had success down to Zone 5b, unprotected). Myoga prefers high shade or semi-shade and its leaves will scorch a little in full sun.

Unlike so-called stem or common ginger, myoga is not cultivated for a fleshy rhizome. Instead, it is grown for its fat, rosy-white flower buds. They are firm and crisp, a seasonal delicacy in Japan and Korea.  My own myoga buds begin to appear in late September, peaking in October. This year I have collected 16, from one pot.

Appearing at the base of the green, leafy stalks, myoga buds begin to poke out when they are about two to three inches long. To harvest, snap them off beneath the soil, where they narrow at the base.  If left undisturbed the buds open into orchid-like yellow and white flowers.

On chilly, early-autumn mornings one of the first things I do is visit the myoga pot to wiggle my fingers in the good-smelling soil to see if a new bud has formed. It’s a small but exciting treasure hunt. Then they need a good wash, and can keep for two weeks in the refrigerator, if covered.

The plants I sourced came as starts from Strictly Medicinal Seeds, a nursery based in Oregon. Nearly five years later a small myoga forest is flourishing on our terrace in a sixteen-inch terra cotta pot.

But to the crux of the myoga matter: How about those winters? If it is hardy in-ground, what is its success in a pot, where conditions are more brutal? Does the plant survive outdoors, unprotected in a pot? The short answer, in my case, is no.

Early on, I hedged my bets, two winters in a row: One plant came indoors, and one stayed out. After one winter Terrace Myoga’s ropey roots had turned to mush. Living-room Myoga produced new shoots in mid-spring. In my outdoor pot the real issue was not necessarily the cold, but drainage. In a freeze the lower half of the pot turns solid; when it warms during some days, only the top thaws, creating an anaerobic swamp that cannot drain. This causes root rot, and root rot spells death. It’s brutal.

I divided the healthy plant and tried again for the second winter. One in, one out. Out died. Possibly if I covered pot (with dry soil in it), things would go better, but for me, moving it indoors is easier.

My myoga migrates when overnight temperatures stay consistently below 40 degrees F. For about six months it lives out of the way under a desk, in a dark spot. The plant goes completely dormant and the leaves disappear. The soil remains dry until March, when I give it a drink. Within a week a new shoot will appear. In April I move the pot out again.

In-ground, this would be a different story, and if I had a sheltered spot in semi-shade under a layer of mulch, my myoga would be just fine. The consistent temperature of surrounding soil is protective. If you have an in-ground garden down to Zone 6, plant a hedge of myoga! Its lush foliage blends in beautifully with ferns and hostas, begonias and Solomon’s seal, and all the woodland wildflower ephemera.

Myoga is a plant that keeps on giving: When it crowds its pot, divide the plants in spring and repot the divisions before they have fully-leafed out.

Myoga leaves are aromatic when crushed and sometimes I cook with them (mostly Filipino-style adobos, where the leaves infuse soy and vinegar braising juices).

How to eat myoga buds? Their floral flavor is delicate and mildly spicy.

I also like to slice the buds on the bias and toss with finely-cut shiso or basil leaves and a pinch of salt. This bright relish is delicious with grilled meats like soy-marinated steak or pan-seared duck breasts. Myoga buds are also wonderful with raw fish in ceviche, poke, or atop sushi. A traditional Korean preparation is to grill the buds on skewers, alternating with pieces of meat.

Myoga buds also turn simple salads stellar. (I’m inspired, when creating recipes for a plant with a starring botanical role, by the ingredients in the plants’ native range.) 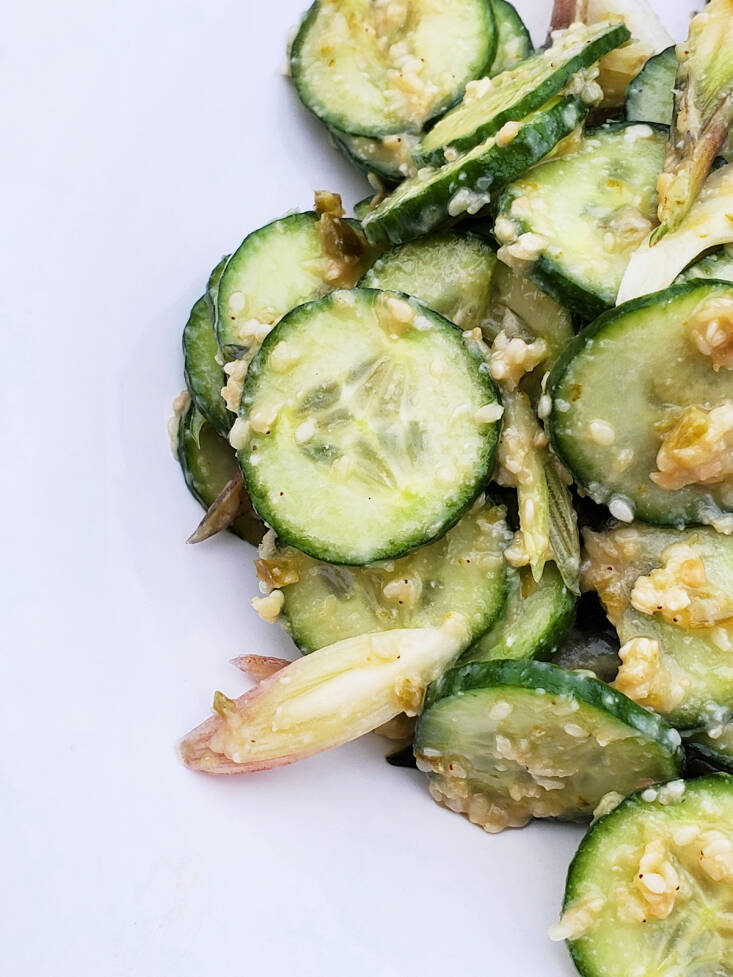 Cucumber and Myoga Salad with Sesame

Wash and dry the cucumbers  and slice them thinly. Place in a bowl. In a small pot over medium heat, toast the sesame seeds, tossing them occasionally to prevent scorching. When they smell good, transfer them to a pestle and mortar. Grind them until they are almost all fine and paste-like (some whole seeds should remain, for crunch). Add the vinegar and the miso, stirring very well. Scrape this paste into the cucumber bowl, add the slivers of myoga, and toss very well, using your hands. Transfer to a serving plate, and dig in. 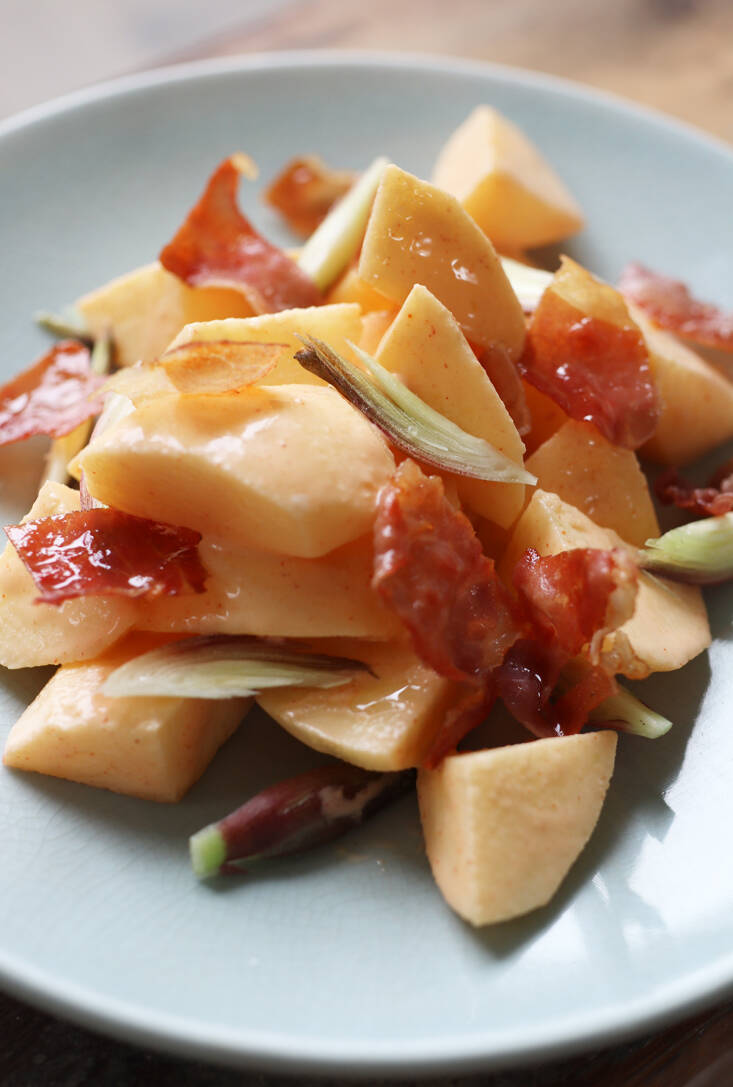 Apple and Gochujang Salad with Prosciutto and Myoga

The best autumn lunch: Juicy, new-crop apples are tossed in a dressing spiked with Korean gochujang, and topped with crisped prosciutto and the floral crunch of fresh myoga buds.

Combine the dressing ingredients in a bowl and stir until smooth. Add the apple chunks and toss gently until they are covered in the dressing.

To serve: scatter some myoga buds on a plate. Pile the apples on them, and add the rest of myoga buds to the pile. If using, top with the crisp pieces of prosciutto.

Trending on Remodelista: An Ode to the Humble Peg Rail

Matsutake: The Sought-After Pine Mushroom (and Its Lookalikes)