In early fall purple hyacinth vine, an annual climber that sometimes festoons garden fences and trellises in North America, is at its most exuberant. On our small Brooklyn terrace it flowers in time to help fuel ruby-throated hummingbirds as they zip south. Also known as lablab, its beans are an important crop in South and Southeast Asia, and are cultivated as food in parts of South and Central America and the Caribbean. This useful and beautiful plant originates in Africa, where some researchers have described lablab as a “lost crop,” better known abroad than on its home continent. But Stateside, the erroneous presumption persists that lablab beans cannot be eaten because they are toxic.

The Jamaican poet Claude McKay eulogized lablab in his poem Me Banabees, which describes lyrically the pleasure of eating the beans and the anticipation of waiting for this late-blooming vine to flower and fruit:

Bannabees is one of over 100 common names  for lablab, in a multitude of languages—a sure sign of a plant’s usefulness.

My own lablab revelation happened about 12 years ago, after a late-summer stroll through the diverse, immigrant-rich neighborhood of Kensington in Brooklyn, where boundary fences sometimes double as food-trellises. That day the chainlink was heavy with crops like gourds, lima beans, yard-long beans, and…lablab pods? Curious, because I had presumed the vine was purely ornamental, and knew these growers were serious about food, I began to delve online.

I learned that lablab is not just a pretty plant but an ancient crop: Archaeo-botanical finds in India, dating prior to 1500 BC, offer tantalizing clues to lablab’s culinary journey from Africa, where its use and cultivation appear to be in decline. (For anyone drawn to rabbit holes, the book Lost Crops of Africa: Volume II: Vegetables (2006) is a treasure trove of edible exploration.)

Why lablab as a vegetable is unappreciated in mainstream US (read non-immigrant) culinary and farming culture remains a mystery. The jewel-hued flowers and amethyst pods of purple varieties (there are also green pods and white flowers) of Lablab purpureus are usually marketed in the US as “decorative”—short-hand for don’t-eat-them-or-you’ll-die. The Botanical Interests website states “…not recommended for eating.” On the other hand, Johnny’s Seeds has done their homework and concludes, “A favorite in our taste tests.”

The fear begins with fact (like the germ of many conspiracy theories): Like lima beans, cassava, and bamboo shoots (and the seeds of apples, pears, and stone fruits), lablab beans contain natural plant toxins called cyanogenic glucosides, which are water-soluble. So they must be soaked to remove the toxins. Lablab also contains a trypsin inhibitor, as do soy beans; it is destroyed by heat.

In short: Lablab + Water + Heat = Dinner. Not all foods are edible raw.

The key to enjoying lablab is in the preparation. As with most beans and many legumes, they must be cooked.

Immature whole pods, where the seeds have not yet raised a row of obvious bumps, can also be topped and tailed, or sliced finely, and eaten after being cooked in boiling water until tender.

Shelled, dry lablab beans should be soaked overnight, and their soaking water should be discarded.

Lablab is also a valued forage for livestock, as well as food for the soil: As a green manure (i.e. a cover crop) it returns nitrogen to the earth. But it is in terms of human nutrition, that it shines: Lablab beans are high in protein and carbohydrates, amino acids and fatty acids, and minerals like calcium and iron.

To grow: Lablab is a short-lived perennial only in USDA zones 10 – 11. In cooler zones, grow it as an annual. Sow the soaked seeds directly in-ground or in a large pot; they resent transplanting. Plant well after your last frost date, when nights are consistently above 55 degrees F. The plants are slow to take off (see that McKay poem, again), but by mid-summer the vine will be twining. Flower buds form as days grow shorter, with abundant pods appearing in late summer through fall. Frost will mow the vine down. 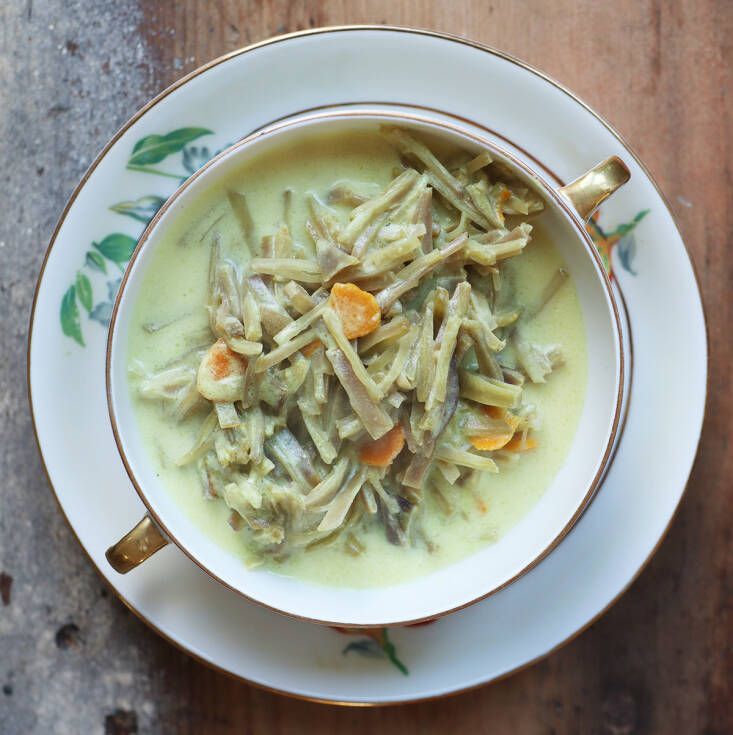 Taking inspiration from Southeast Asian-style curries, I make this soothing bowlful with immature lablab pods. It is satisfying enough as a meal in its own right. And very good with any bean, if you don’t have lablabs (yet).

Top and tail the lablab pods, remove their string, and slice thinly. Bring a potful of water to a boil and add the beans. Cook at a gentle boil until completely tender. Drain, and discard the water.

In the same pot, warm the oil over medium heat and add the turmeric. When it begins to sizzle add the lablab beans and stir. Add the coconut milk and cook at a simmer for 10 minutes. Add the fish sauce and a Tablespoonful of lime juice. Cook for another 10 minutes and taste – you may like a brighter flavor, so add more lime juice.

Serve in bowls, and dig in. 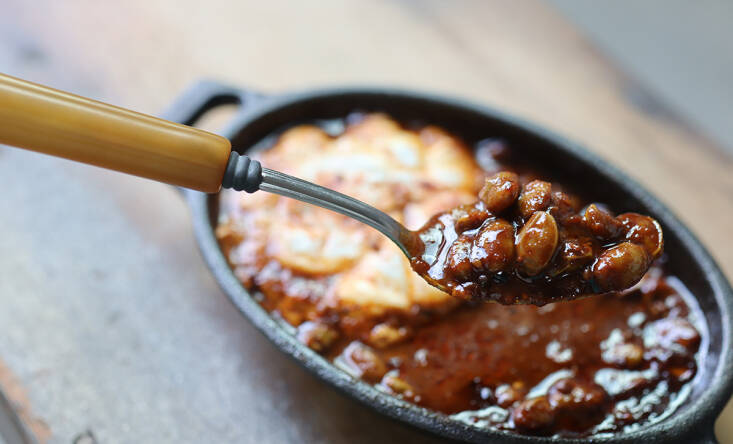 Lablab Beans with Berbere and Cumin

In the spirit of the cumin-scented North African chickpea stew called lablabi (the name is so tantalizingly close) and in homage to the East African use of legumes in earthy casseroles (think Ethiopian shimbra wat, and misr wat), I developed this spicy lablab dish, where the heat and fragrance of berbere are essential.

Discard the beans’ soaking water. Bring a potful of water to a boil and add the soaked beans. Cook at a gentle boil until they are tender—about 15 minutes (depending on how fresh the beans are). Drain the cooking water.

In a small bowl combine the berbere, molasses and ginger with ¼ cup of water, and stir into a smooth paste. In a pot warm the oil over medium-low heat and add the paste. Cook, stirring for about 1 minute. Slowly pour in the rest of the water, stirring to keep it smooth. Now add the cooked lablab beans. Bring to a simmer and cook, uncovered, for 30 minutes. Stir from time to time and add a little water if the bottom is sticking. Taste for seasoning and add some salt, if necessary.

Serve hot with a scoop of cooling yogurt or labneh.

Trending on Remodelista: In Praise of Shaker Style

Ask the Expert: Edwina von Gal, on How to Have a Healthy, Toxic-Free Lawn