One of the best things about visiting a coniferous forest in fall is the chance to hunt for matsutake, the sought-after mushroom that smells  like cinnamon and spice and that commands massive prices in Japan. Recently in Maine, after returning every day to a woodland where I had hunted them before, I padded across the bouncy and dense duff beneath hemlock and fir, my eyes peeled for “mushrumps,” the tell-tale caps of matsutake pushing through the disintegrating needles. I found the mushrooms at last, emerging after summer-absent and much-needed rain. Cushioned in a basket of moss, they perfumed our car on the long drive home to New York City, where we feasted on them.

Matsutake are delicious, and complicated.

Also known as pine mushroom (matsu means pine and take means mushroom, in transliterated Japanese), because they often grow in association with pine species, matsutake are treated with reverence in East Asia.

Tricholoma matsutake is part of a species complex, where several closely-associated matsutake species have not all (yet) been separated genetically and described scientifically. In appearance these different matsutake can be exceptionally similar. Their collective distribution is broad, from East Asia through Northern Europe, North America, and into Central America.

The first matsutake mushrooms I “foraged” and ate came from Wegman’s. The supermarket near Brooklyn’s Navy Yard was selling them one November for a price so low I hesitated. Was it a trick? Then I pounced and fled with my bounty before someone changed their mind.

In Japan they are given as hugely expensive gifts in autumn. But because of an invasive (North American, incidentally) nematode-pest that attacks their red pine partners in Japan, those populations of matsutake have suffered a significant decline. Chinese and European harvests filled the gap, but climate change and deforestation in those regions have contributed to a loss of matsutake habitat, too. Yay, humans. Commercially foraged mushrooms are now supplied by Mexico and Guatemala, as well as the Pacific Northwest (T. murrillianum) and the Eastern United States (probably T. magnivelare).

Why the “probably”? Wegman’s is not alone in being unsure of what it has foraged. Matsutake are not that easy to differentiate from one another. But they do seem to share their assertive, uniquely spicy aroma, and they are all edible, although some have a bitterness to their flavor profile.

There is what some foragers refer to as false matsutake, and what Michael Kuo, author and founder of the website mushroomexpert.com describes as T. “caligatum”. The quotes are his, and he explains them by writing that “the caligatum group on our continent is in need of serious contemporary study and revision!” They look like matsutake, but may—or may not—lack the aroma. Alan Bergo, the self-described forager-chef, comments that they are scentless as well as bitter. But I have experienced the bitterness with highly fragrant mushrooms, too. Were mine T. caligatum, or the Eastern T. magnivelare? It’s a hazy area, which future mycology should bring into focus.

The intensely scented mushrooms that I hunt in Maine smell like cinnamon to me, but are off-putting to my husband. Could it be the whiff of sweaty socks that some literature describes? Same mushroom, different noses. Some of these mushrooms have a bitter side-taste, to my tongue, while my husband does not experience this, even if we bite the same ‘shroom. Are they T. magnivelare? Probably. Could some be T. “caligatum”? Maybe.

What does this mean for mere foraging mortals, looking for some seasonal flare to spice up their forest suppers? In my opinion, forage on: If it is a matsutake, regardless of parsing, it is dinner.

That notwithstanding, matsutake are NOT a mushroom for beginners to hunt. If you are unfamiliar with mushrooms in general, these delicious matsutake have some very troublesome lookalikes, so stick to the seasonal bounty at a gourmet grocery store.

A matsutake lookalike fooled me, the first time I swooped upon it. I should have given it a good sniff, but was too busy unearthing it, like an over-excited, truffling pig (it smells mealy rather than distinctively spicy). It is Catathelasma, with a similarly tapered stipe (stem), and also with the very dense flesh that characterizes matsutake. It tends to be much larger, too. Catathelasma is edible, and finding it is modest compensation for a matsutake-less hunt.

Then there is the Amanita genus. Highly toxic species of Amanita, like the Eastern destroying angel (the name says it all), are also white and can grow in the same matsutake environment. They have white spore prints, like matsutake. But Amanita emerges from an egg-like sac that gives it a distinctive bulbous foot, whereas the stipe of matsutake is tapered toward the base. Their color and texture is also different: this Amanita is pure white, tender, and soft (squeeze its stem and it will be smushed), and its cap feels fragile. Matsutake, while white, can be streaked with brown, and is firmly sturdy (the stem will feel strong and resilient when squeezed). Amanita have no spicy aroma. Matsutake are strongly fragrant.

There’s a good tutorial in the pages of this linked North American Mycological Society document (2017), although they describe a different Amanita, more likely to occur on the West Coast.

In short: ALWAYS confirm the identity of your mushroom with an expert before eating it.

Our matsutake, over several seasons, have been eaten in a multitude of ways: Baked en papillote with shoyu. Poached slowly in butter. Shredded, stem through cap, into a gentle coconut milk curry with Maine salmon and new potatoes. Cooked into a confit. 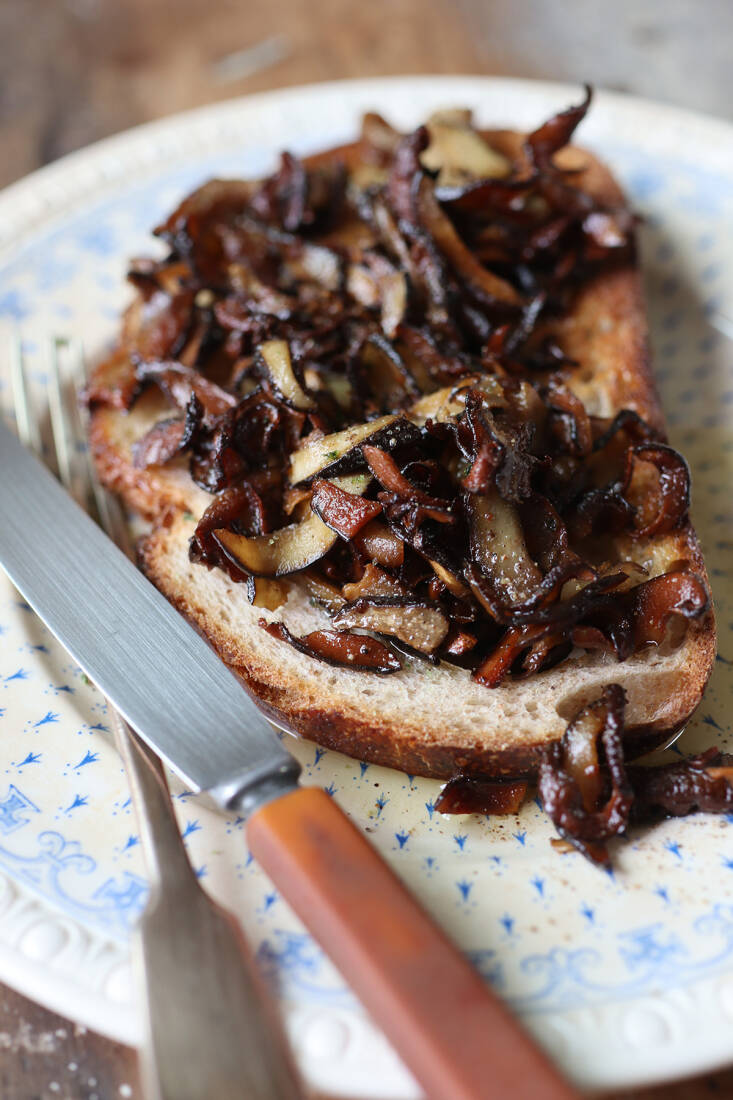 Cooking matsutake gently in butter perfumes the butter and also removes any trace of the bitterness that some can have, without losing their spicy scent. To make them go further I like to mix them with other mild, edible mushrooms (in this case, boletes). The crunchy, flavor-laden mushrooms are wonderful on steamed, poached, or soft boiled eggs, and of course, on toast.

In a saucepan melt the butter over medium heat and add the mushrooms. Cover for a minute or two to steam the mushrooms. Remove the lid, turn the heat down as low as it can go, and cook until the mushrooms are golden brown and turning crisp. Somewhere between a confit and chip. Transfer them at once to freshly toasted sourdough bread.

For more recipes from Marie, see:

Ask the Expert: Poppy Okotcha on the Wild Edible Garden

Myoga Buds: How to Grow the Autumn Asian Delicacy