Take a remote, untamed place on the Cornish coast and select the perfect person to design a garden there…someone who cherishes wildness in the land, is maybe even a little wild herself.  Such is the apt pairing of Irish landscape designer Mary Reynolds and the garden of the Camel Quarry House, a sleek stone and glass vacation home perched atop the footprint of the former manager’s residence at an ancient slate mine.

You may recall that Reynolds is the Irish upstart who flabbergasted the UK gardening world in 2002 by winning a gold medal at the renowned Chelsea Flower Show when she was still in her twenties.  She beat out Prince Charles and other distinguished contenders with a decidedly unconventional entry titled A Celtic Sanctuary.  It was an invocation, calling forth the primordial Irish forest, and so lifelike that it appeared to have been pried out of the ground and magically flown to London.  Among the many people who took note was Emma Abdy Collins, the artist owner of the Camel Quarry House.

Photography by Dan Duchars, except where noted. 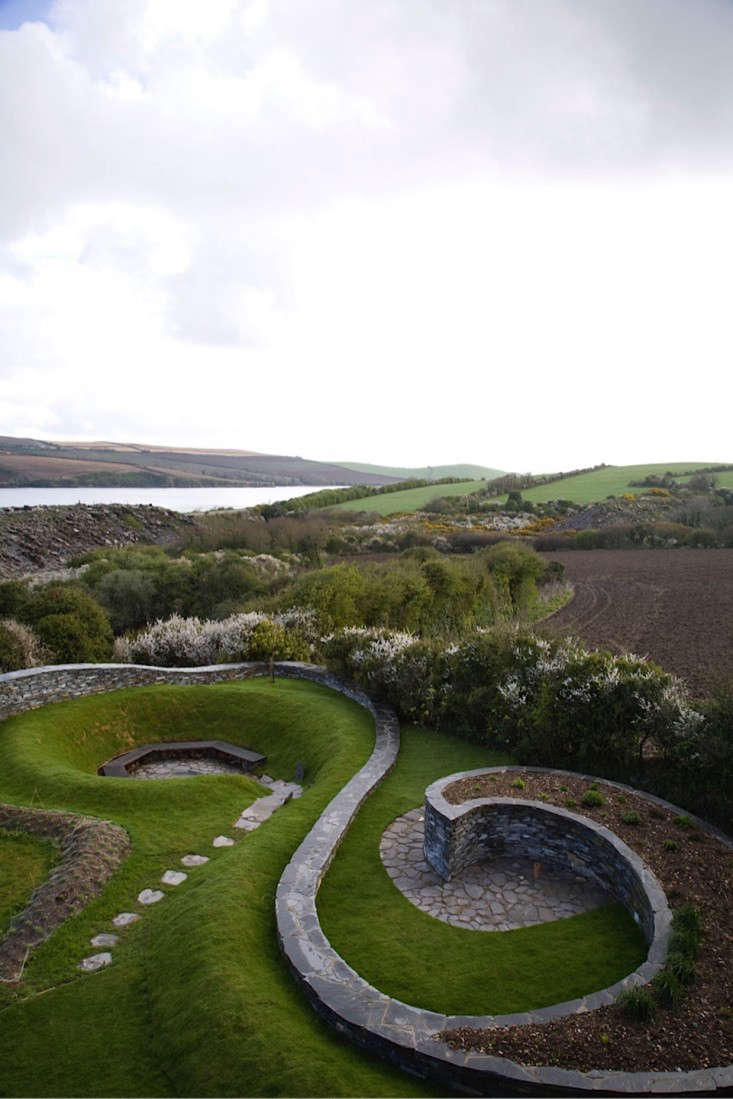 Above: Reynolds recently recalled that when she first saw the acre-and-a-half Quarry House site she was worried.  The land abutted farmland as well as a giant heap of waste slate left over from the quarry days (1600s to the 1890s).  She wondered how she would blend the garden with the existing landscape and also how she would make it a safe space for the owners’ young children. 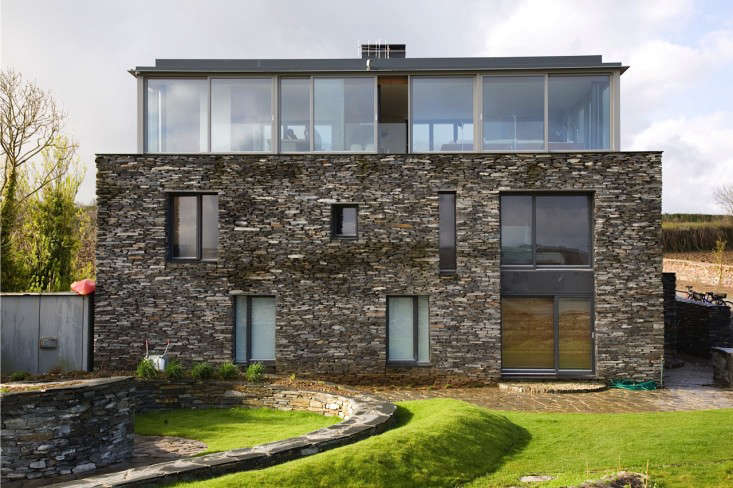 Above:  According to Collins, Reynolds was the right choice for the job because, she says, “The house is straight lines throughout and I knew that Mary’s organic forms would be a perfect marriage of opposites and complement the wild natural setting as well as the house. I wasn’t disappointed.” 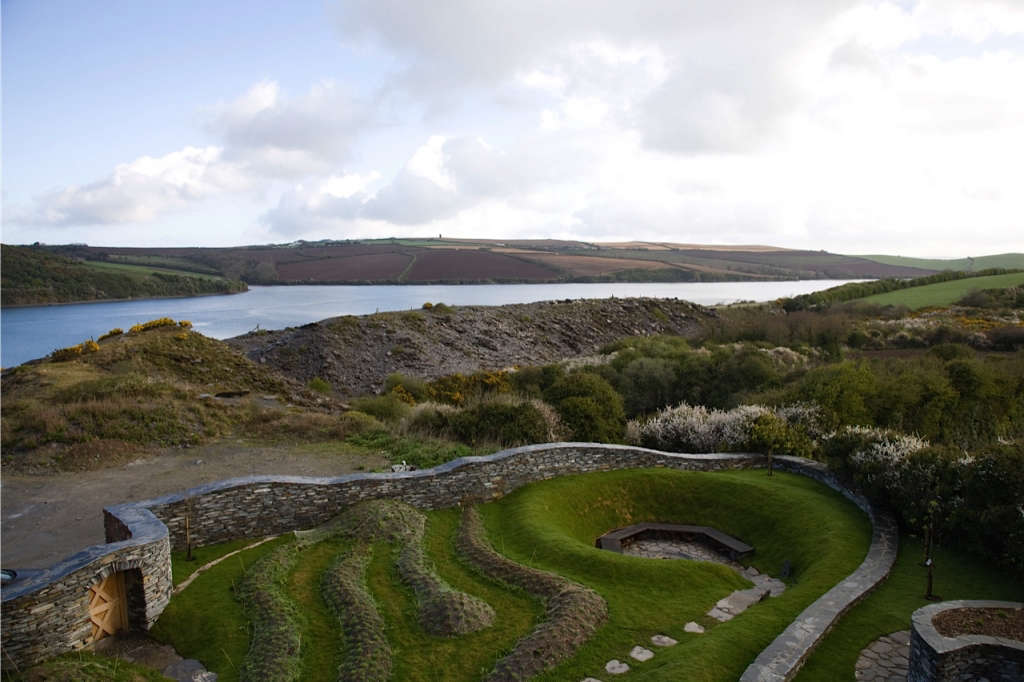 Above: Reynolds drew her design inspiration from the natural undulations of the earth, creating sinuous forms that echo the way the land rolls down to the water. Today Reynolds says that she likes to be “more gentle on the earth”, but in the mid 2000’s when she was installing the Quarry garden, she used earth moving equipment to create the curves in the land. 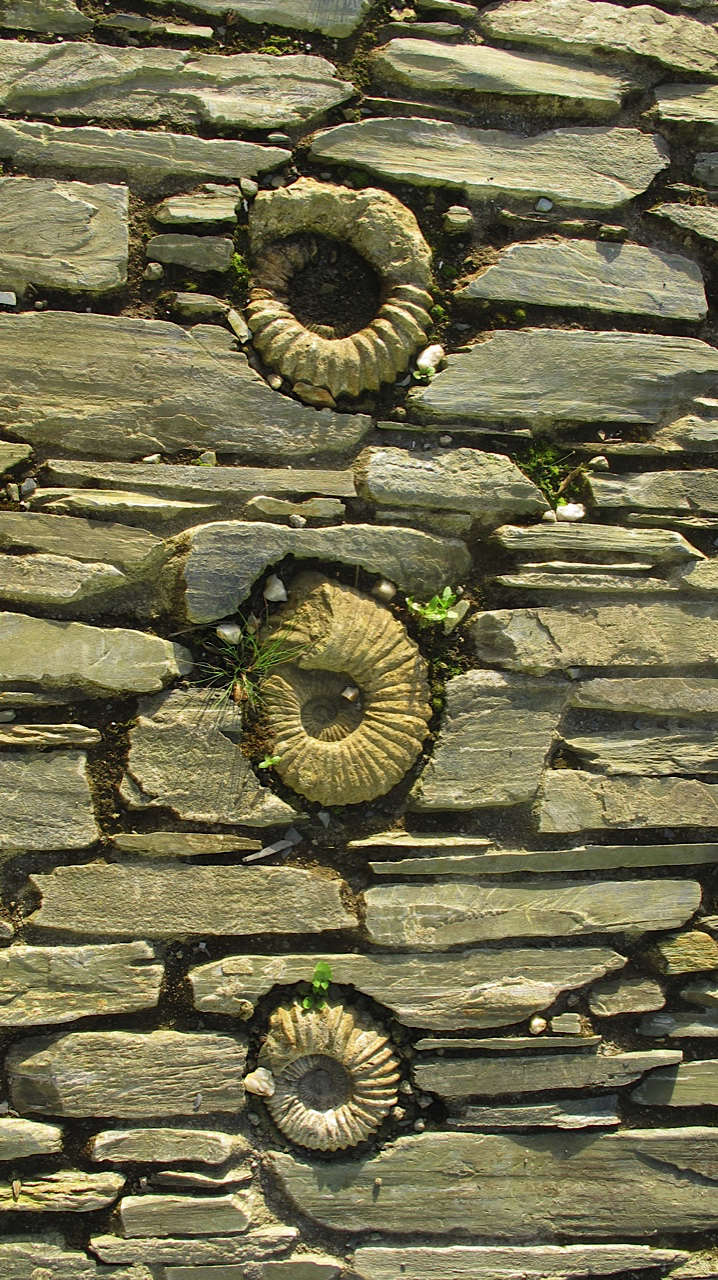 Spiral fossils were part of the owners’ collection until Reynolds appropriated them for the garden’s stonework.  Local artisans supervised by Totti Gifford, a landscape architect who performs with his wife in the Giffords Circus during the summer, built the distinctive walls and raised beds. Gifford convinced the stoneworkers to follow Reynolds’s plans even though the men were skeptical and, according to Collins, frankly thought the design was crazy. 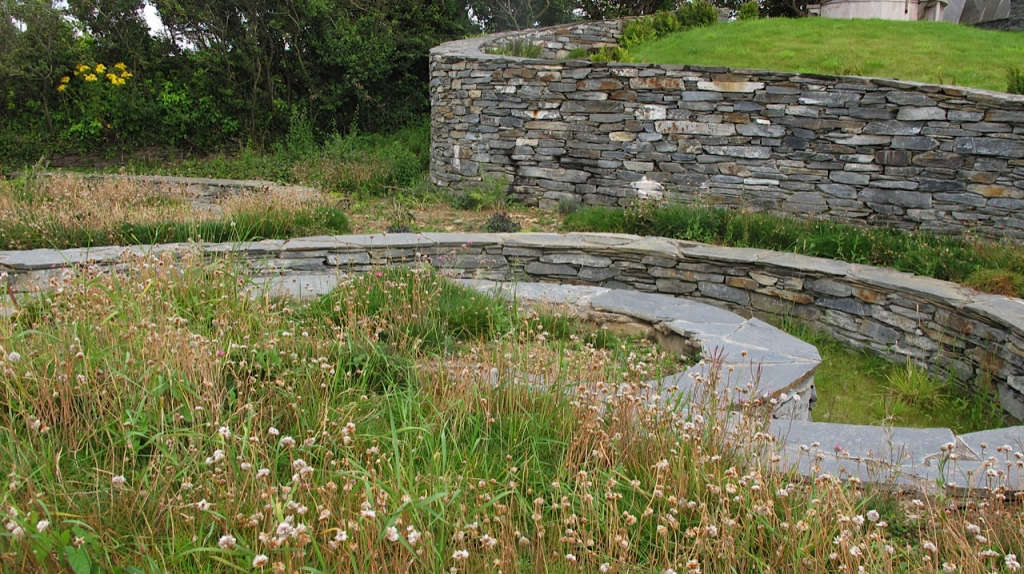 While the walls appear to be traditional non-mortar construction, Reynolds says they actually consist of dry stone facing which is attached by a thin layer of mortar to concrete block.  This was necessary because most of the walls are retaining walls that needed to be strong enough to hold soil in place.  The raised beds are designed as swales to catch rain water and allow it to percolate through the soil instead of running off. 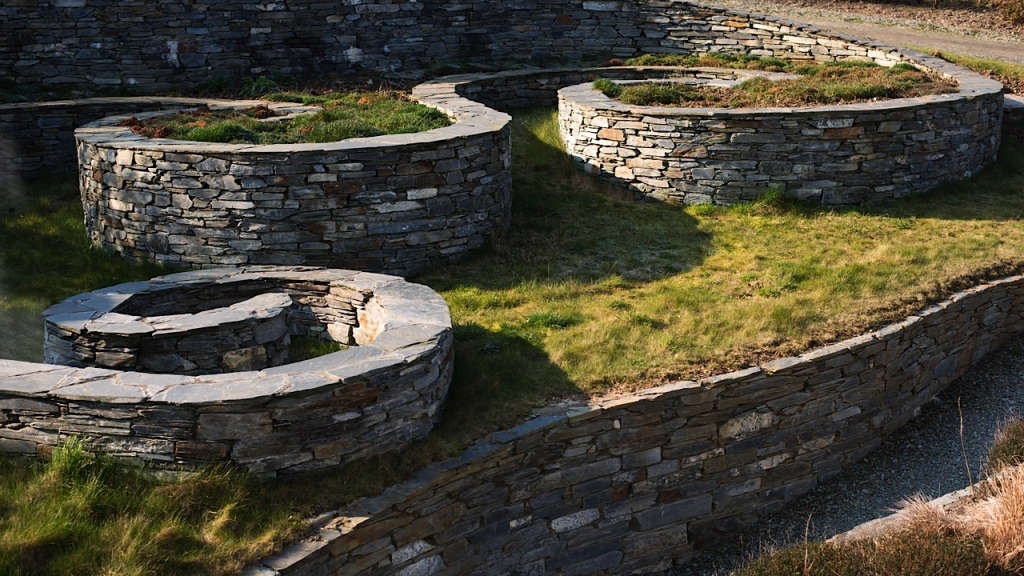 Above: Photograph by Will Scott.

Reynolds tried to limit herself to plants that are native to the Cornwall area such as clover, fuchsia, wild thyme, and sea thrift.  She chose grasses for their wave-like movement in the wind. All the plants were either grown from seed or installed as plugs.  Reynolds says she avoids nursery grown plants because they have been raised under artificial conditions and can be unsuited for the weather extremes of the real world. 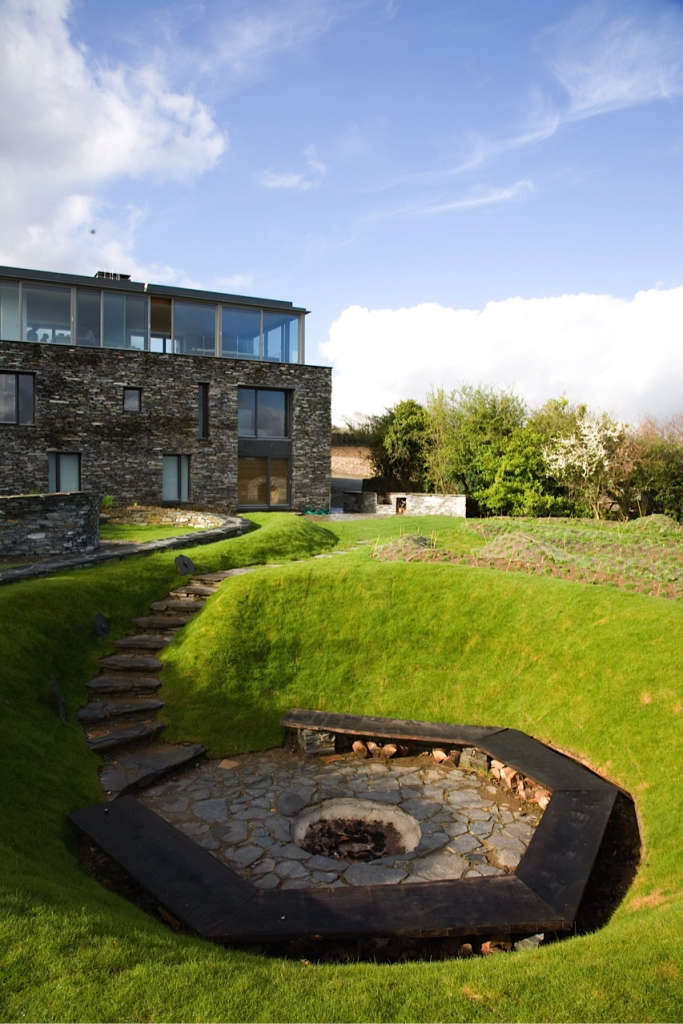 Above:  In her new book The Garden Awakening, which is being released in the U.S. this month, Reynolds lays out her current gardening philosophy. While many of her ideas have evolved since she created the Camel Quarry garden almost a decade ago, there are features in it which she still embraces. 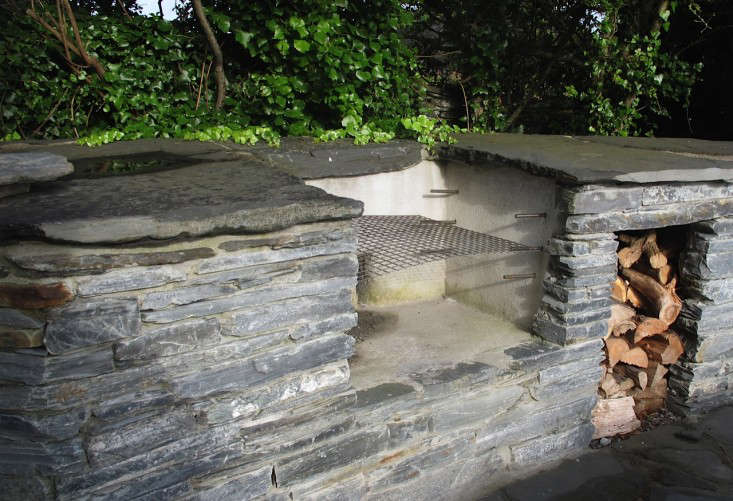 Above: Photograph by Emma Cooper Key.

Reynolds advises readers to include in their garden designs dedicated areas for private reflection and prayer such as labyrinths and fire pits. 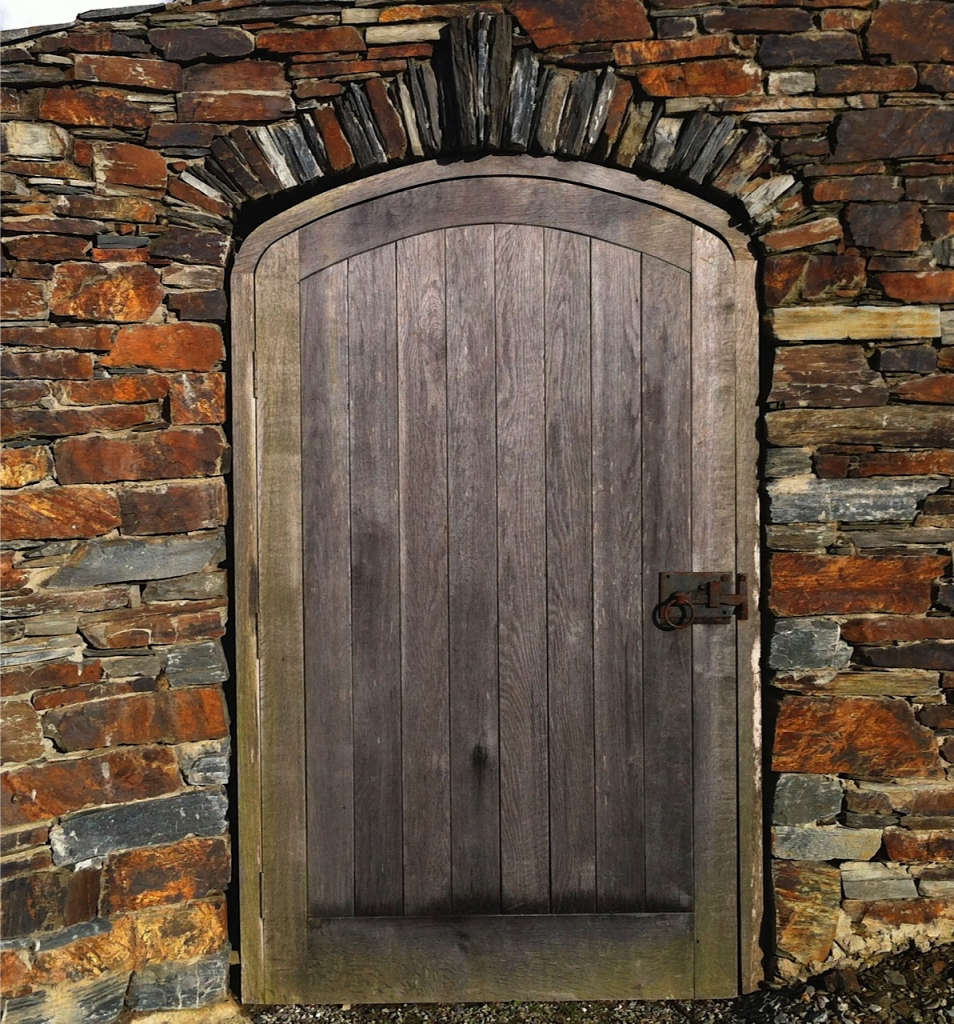 Reynolds’ distinctive style and her theories about the need for change in traditional garden design and maintenance set her apart from other successful Irish designers such as June Blake whose work is naturalistic but manicured. Just how apart Reynolds is from others in her profession is perhaps best demonstrated by the fact that later this month a feature film about her, Dare to be Wild, is scheduled to be released.  The movie dramatizes Reynolds’ creation of her winning Chelsea entry and features a concurrent (and factual) love affair. 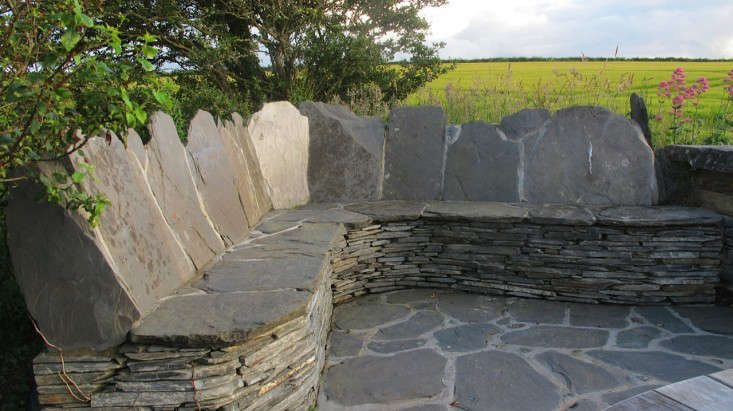 Above: Photograph by Emma Cooper Key.

In her book Reynolds talks about the need to bring into our gardens the energized atmosphere that is found in wild natural landscapes. She describes techniques, many drawn from the holistic practices of permaculture, that honor and preserve the natural attributes of the land.  At Camel Quarry she has used an ancient symbol, the spiral, to provide a sense of movement, energy and growth. As she says in The Garden Awakening, “Nature uses the spiral to circulate and transmit energy and consciousness from one place to another.” 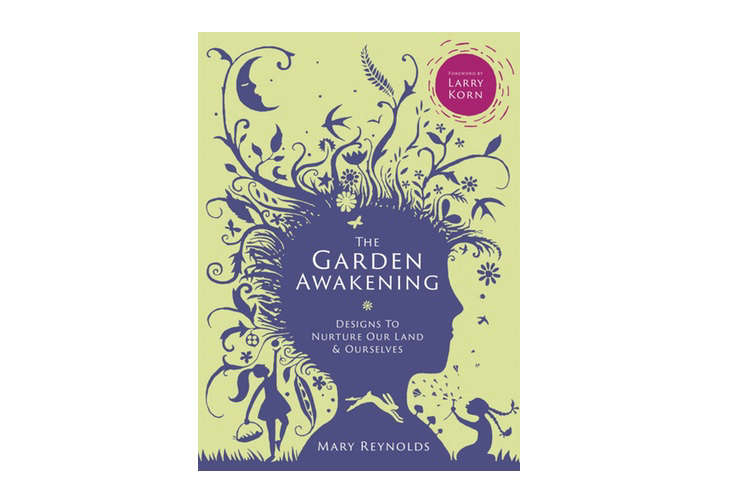 Above: The Garden Awakening is available for $19.01 from Amazon.

For more on the Camel Quarry House, see  A Modern Family Home in Cornwall; History Included on Remodelista.