Slate is making a comeback. A roofing material that has topped castles and cottages since the 13th century, slate was pushed aside in recent decades by cheaper and easier-to-install asphalt shingles. But slate–durable, beautiful, and long-lasting–is considered the highest quality roofing material available. So doesn’t everyone have a slate roof?

(N.B.: This is the fifth in our series of primers about roofing materials; scroll to the end of the post for links to recent stories about asphalt shingles, clay tiles, wood shake and shingles, and standing seam metal roofs.) 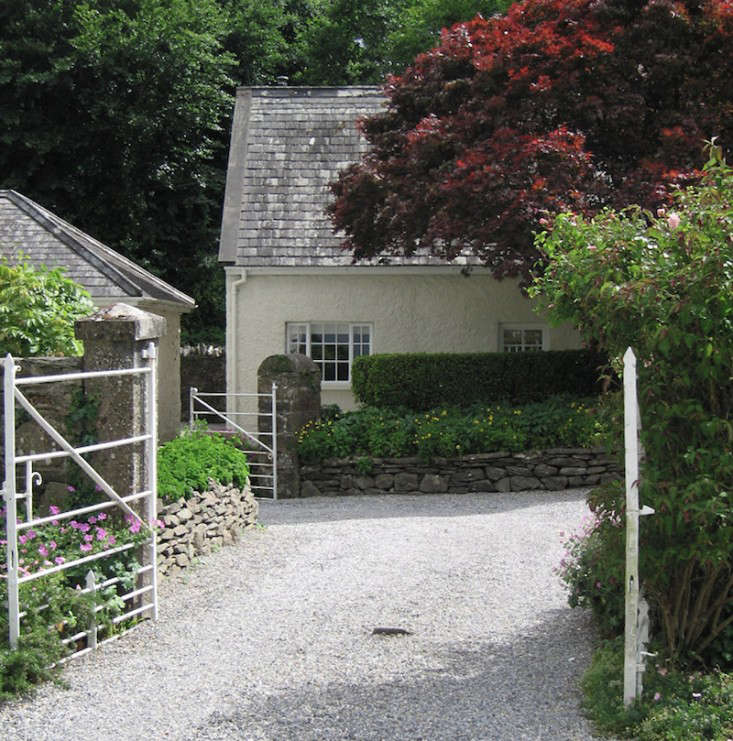 Dry stone walls in the garden of a former schoolhouse in County Tipperary, renovated by Tierney Haines Architects. Photograph courtesy of Tierney Haines.

How are slate roofing tiles made?

Slate is a quarried metamorphic rock with a particular mineral characteristic that enables it to be split with a slate cutter into thin (but durable) pieces that become roofing tiles. The tiles can be split in varying thickness, but the industry standard in North American is “nominal quarter inch.” Slate tiles in this category are split for a target of 1/4-inch, but because splitting is done by hand, variations occur.

In the US, most slate is from Vermont, New York, Pennsylvania, and Virginia quarries. The majority of European slate comes from Spain.

Slate varies in strength, water absorption, and resistance to weather. The good news for consumers is that slate is tested and rated accordingly, with S-1 being the highest (life expectancy of more than 75 years) and S-3, the lowest (20- to 40-year life expectancy). Most quality tiles fall into the S-1 category.

Do slate roofing tiles come in different shapes and colors?

Slate roofing tiles are most commonly rectangular and square, but other forms including bullnose, hexagonal, and half moon are available.

For visual interest, tiles of different sizes and shapes can be mixed (but be careful to use the same thickness). Greater aesthetic variations can be achieved by creating patterns or mixing different colors. 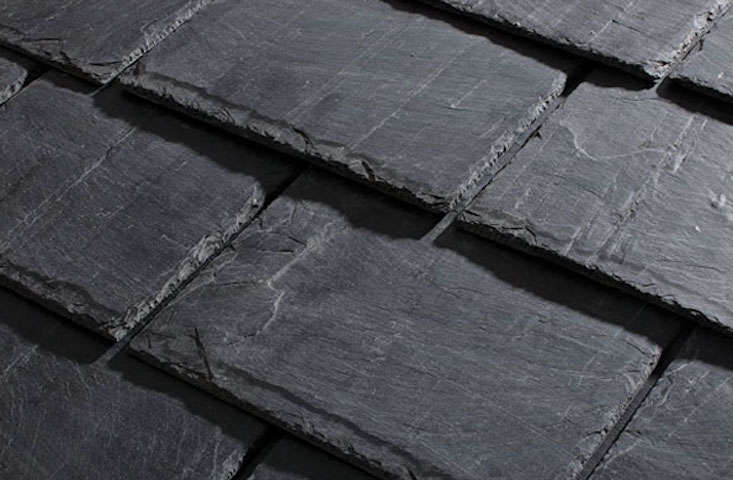 Above: Photograph via American Slate. 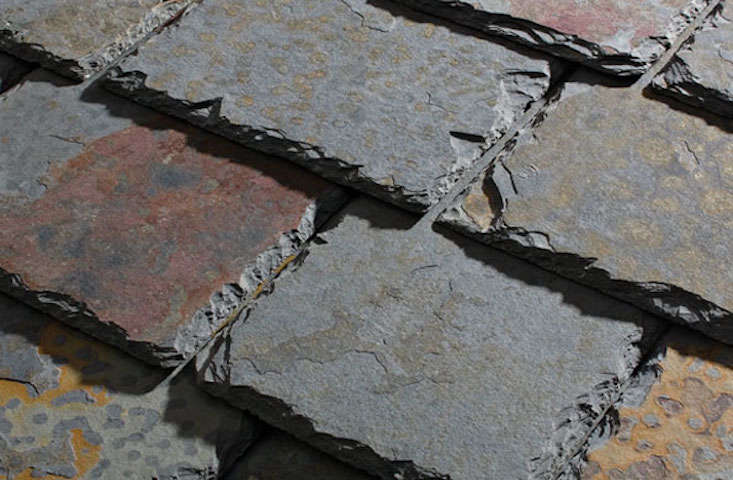 Above: Photograph via American Slate.

Slate’s color is determined by its chemical and mineral composition, which depends on its age and place of origin.  Slate colors can be either unfading or weathering. Weathering slates change color slightly over time as a result of the oxidization of the ferric (iron) minerals in the slates.

What are the benefits of slate roofing tiles?

Longevity: With a lifespan ranging from 75 to 200 years, it is safe to say that high-grade slate will be the last roof you put on your home. 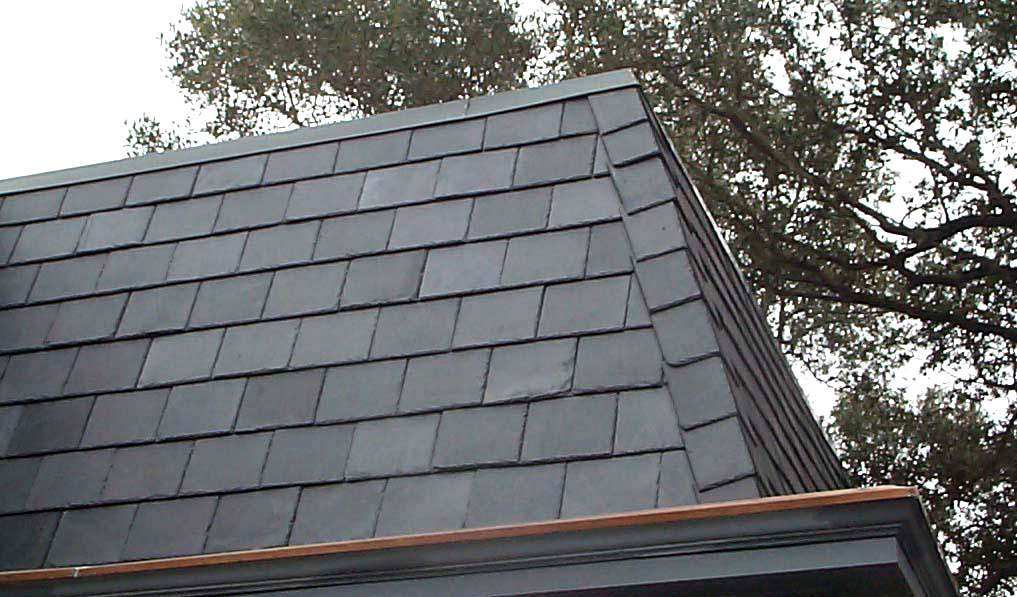 Durable: A dense stone, slate acts as a tough shield against weather. It is impervious to rain, hail, heat, and other harsh elements. In addition to its strength, slate is fireproof, waterproof, and mold and mildew resistant.

Environmentally Friendly: A 100-percent natural material, slate contributes no harmful substances to the environment. Its density makes it a great insulator, reducing energy spent heating and cooling. And, its longevity alone is an environmental plus, greatly reducing construction waste. One slate roof can keep waste from three asphalt roofing replacements out of a landfill. 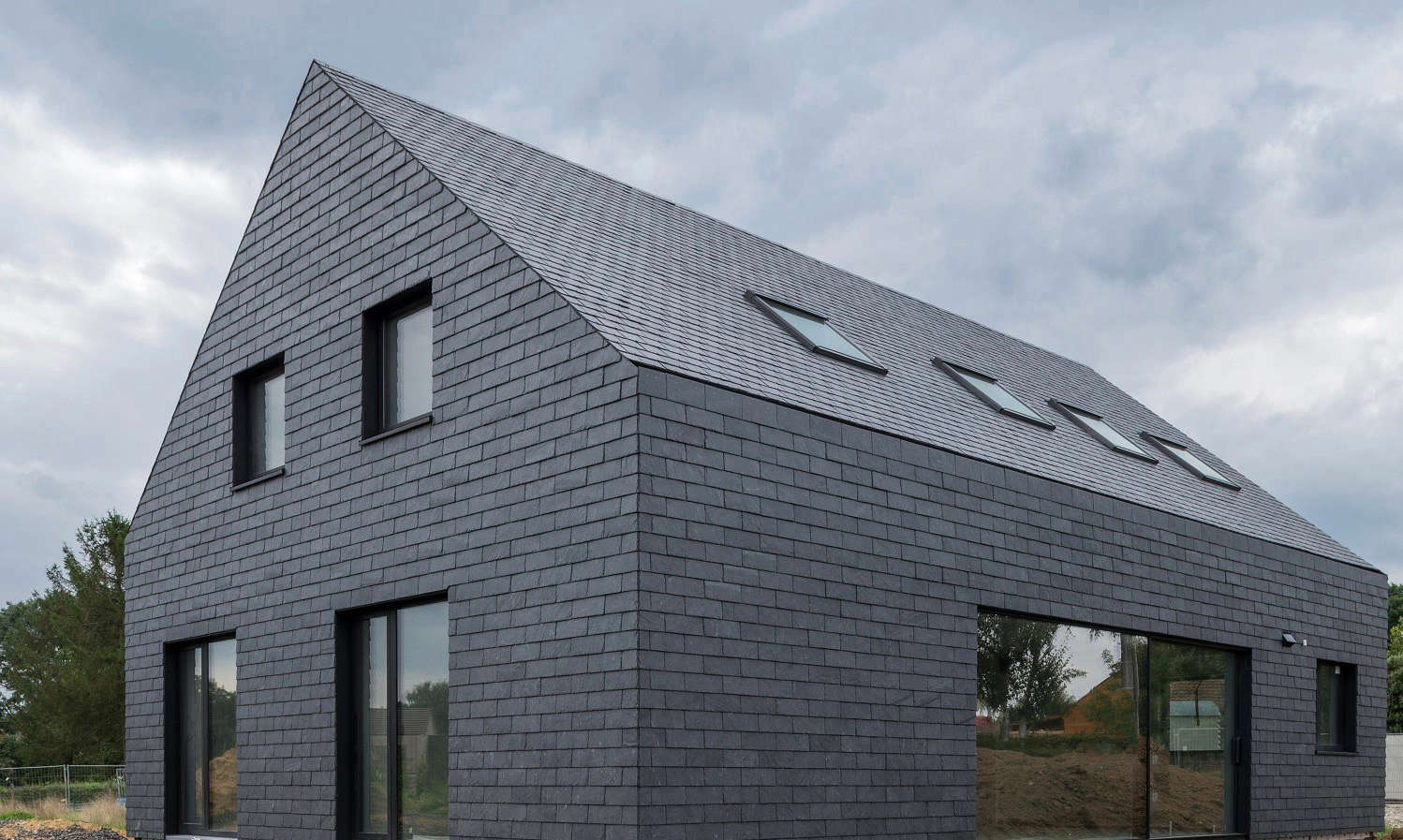 Above: A slate roof in Belgium matches slate tile siding on the rest of the facade. Photograph via Cupa Pizarras slate suppliers.

How much does slate roofing weigh?

Slate is a heavyweight. Standard 1/4-inch slate tiles weigh approximately 1,000 pounds per square (100 square feet). This is about four times as much as wood, and ten times as much as asphalt. Consult with a professional to make sure your roof can support the load (if reinforcement is necessary, be sure to factor that into the cost).

What maintenance does a slate roof need?

Slate is a material that needs little care, but that does not mean you can ignore it. As with any roof, you should inspect it annually for damage and debris. Cracked, missing, or loose tiles should be repaired or replaced promptly to prevent leaks or damage to the substructure. Fortunately, a professional can replace individual tiles easily (tip: save leftover tiles from your installation). 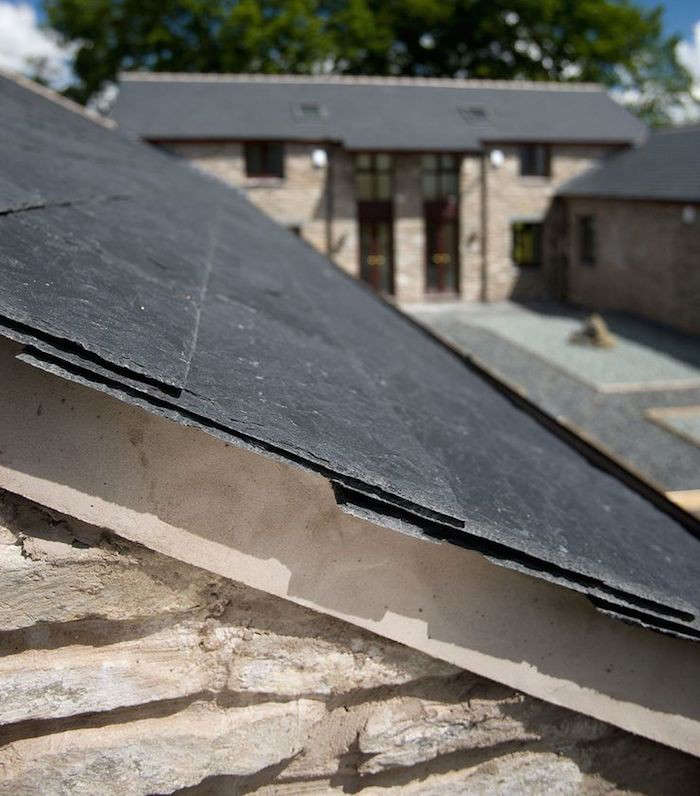 Above: It is important to keep your slate roof free of debris, especially if you live in a cold climate, as ice can collect around the debris and crack tiles. Photograph via Cupa Pizarras Slate.

How much does slate roofing cost?

Slate is one of the most expensive roofing materials. But it can be very cost effective over the life of the roof (which is likely to outlast you and maybe your house). Estimates range from $1,000 to $4,000 a square (roofing lingo for 100 square feet). Costs vary depending on location, a roof’s structural integrity, the grade of slate, and the complexity of the job. This compares to from $400 to $900 a square for wood shingles, and from $150 to $350 for asphalt shingle roofing. Installing slate tiles is complex and time consuming and should be done by a roofing contractor who specializes in slate. It is said that the weakest point of a slate roof is where tiles meet flashing and gutters (another reason to hire a quality contractor). 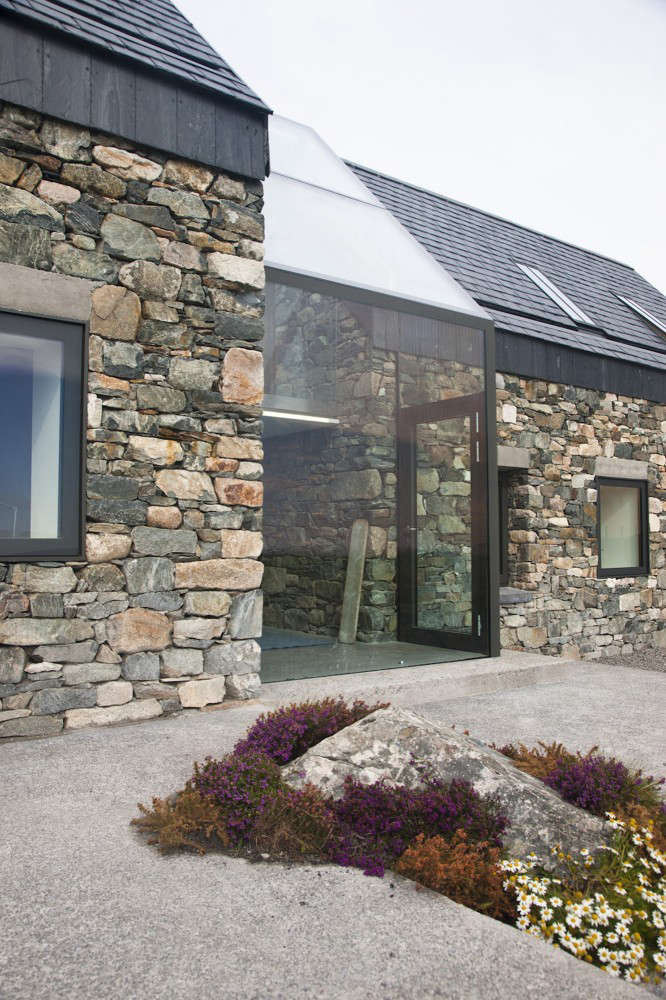 Above: A pair of dilapidated stone cottages on the west coast of Ireland was updated by Dublin-based Peter Legge Associates. The traditional slate roof hides the contemporary updates of gutters and drainpipes. Photograph by Sean and Yvette. For more of this project, see our Architect Visit: An Irish Stone Stable on a Dramatic Landscape. 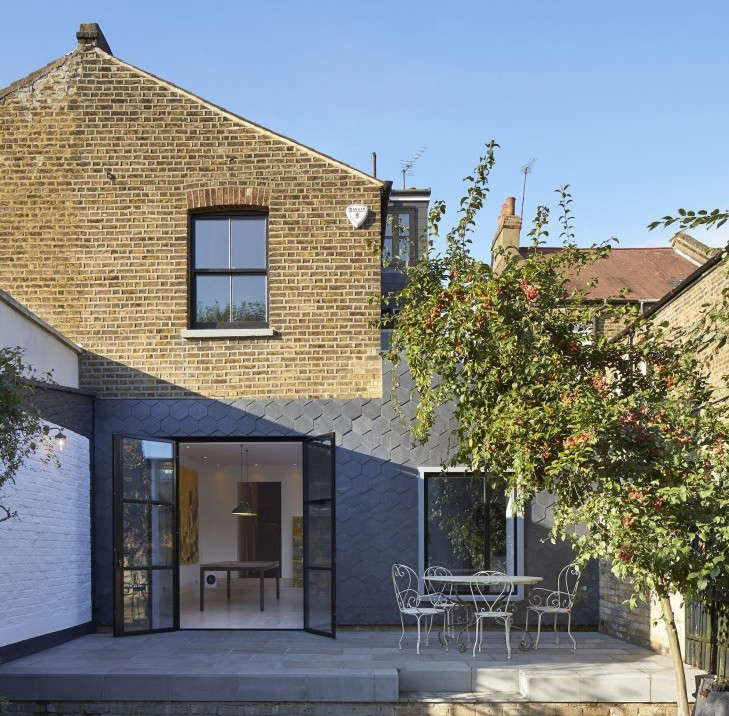 Above: Slate tiles also can be used as siding. Spotted in a project by London architecture firm Gundry & Ducker, this slate facade takes a traditional hexagonal shape and makes it look fresh by keeping the rest of the look clean and modern. Photograph by Hufton & Crow for Gundry & Ducker. For more about this project, see Steal This Look: A House with Slate Shingle Siding.

A Study in Scarlet: Foraging on Cape Cod

The Dark Mirror: A Backyard Reflecting Pool in Eastern Europe