For nearly 40 years, a retired couple from Dublin enjoyed a second home on the west coast of Ireland, about an hour’s drive from Galway. As visiting children and grandchildren became a constant presence, the couple decided to expand the living quarters there.

Rather than add on to their existing house, the couple chose, with Dublin-based Peter Legge Associates, to renovate a pair of dilapidated stone cottages located elsewhere on the property. Over time, the harsh landscape had destroyed the original structures–a house and animal shed dating from the early 1800s–but the landscape would also be a defining characteristic of the new project.

Photography by Sean and Yvette courtesy of Peter Legge Associates. 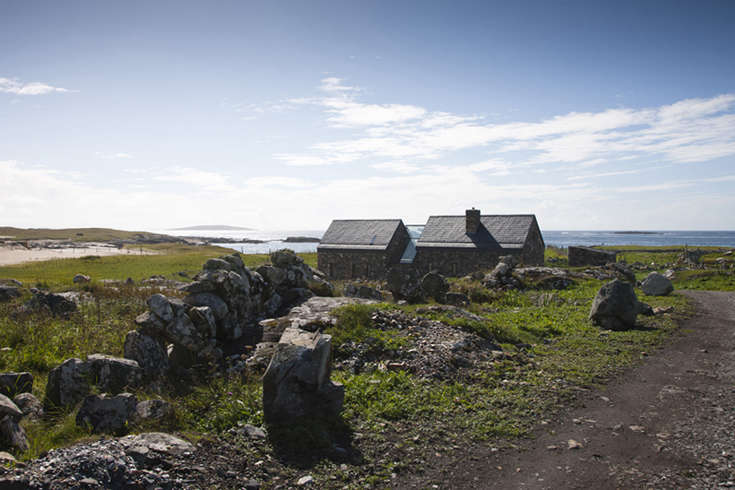 Above: The architect and owners wanted to retain the essential character of the two structures by maintaining them as two separate buildings–even though they are only three meters apart. Using stone from the property, they rebuilt on the original footprints and linked the two buildings with an all-glass stairway. 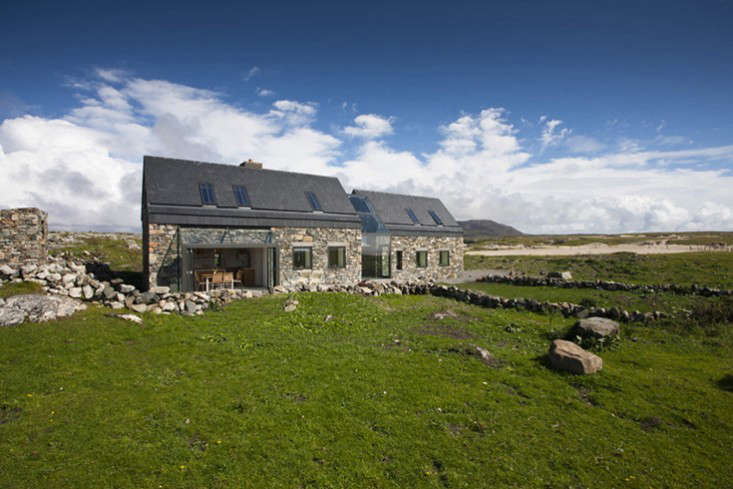 Above: The clients wanted the peaceful landscape incorporated into the design, and the dramatic changes in weather to be on display from within.

One glazed wall of the ocean-facing dining room opens completely, allowing the kitchen, dining room, and outdoor terrace to operate as one. 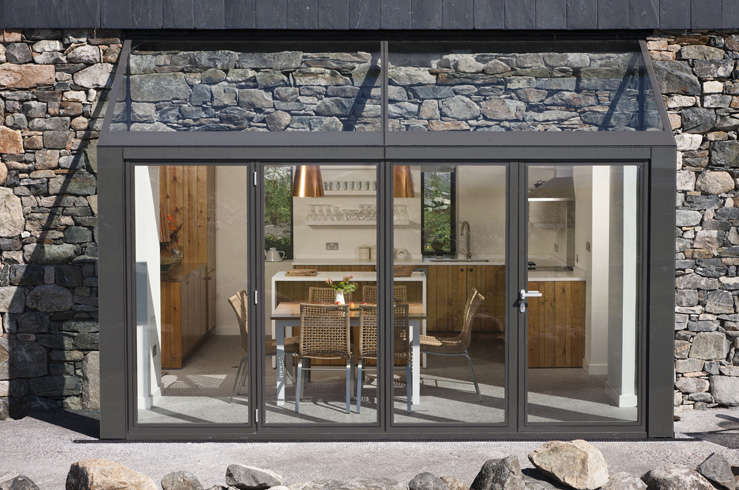 Above: Locals report that the last resident of the home was a Mr. Folan, who lived at the site until the 1980s. When the roof of the shed caved in, he reportedly let the animals join him inside the house. 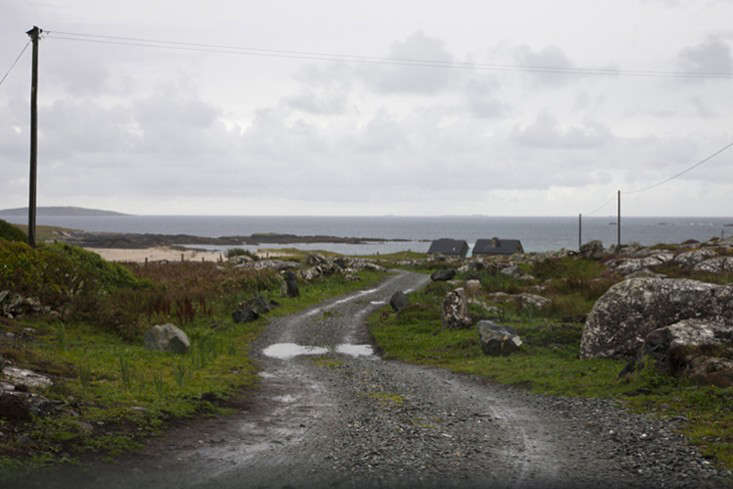 Above: The seven-acre long, narrow plot running from the main road to the sea is a conventional shape for properties in this part of Ireland. 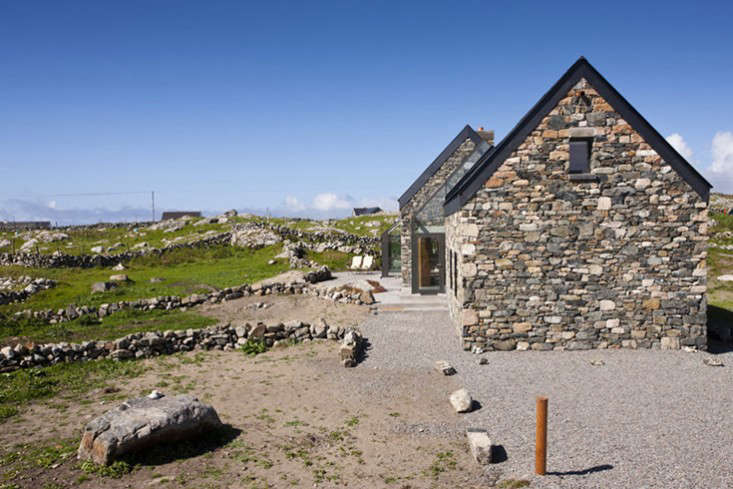 Above: The architects carefully reused the existing stonework, a mix of rocks dating from the pre-Cambrian era. They added a rainscreen on the outer face for extra protection against water accumulation. 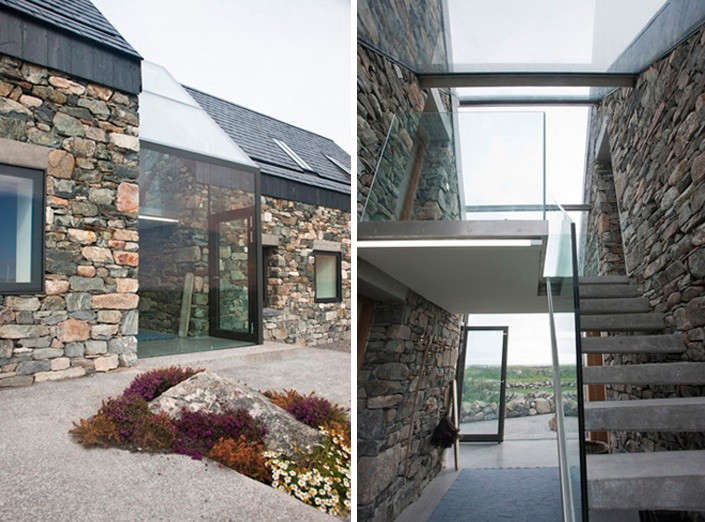 Above: The glass stairwell serves as both the main entryway and the connection between the two cottages. It was intended to be the only visible modern detail on the exterior, so other contemporary updates like gutters and drain pipes are hidden beneath the stonework and slate roof. 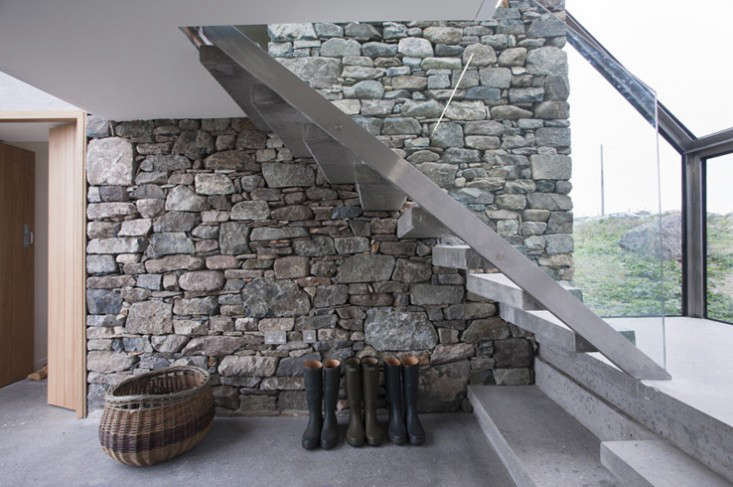 Above: A cantilevered concrete and steel stair inside the entryway contrasts with a wall of rough-hewn stone. 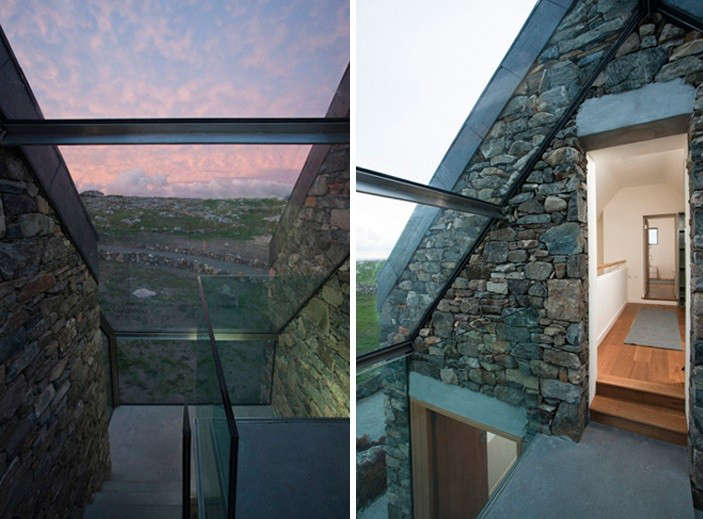 Above: Through the cottage’s skylights and walls of glass, residents can see the Twelve Pins mountains, the Atlantic Ocean, and many miles of green dotted with rock and collapsed enclosures.

Steal This Look: Built-In Brick Seating for a Tuscan Terrace