Facing squarely to the east, Sezincote is like a fabulous dream. Though it inspired the Prince Regent in 1807 to build the highly decorated Brighton Pavilion, Sezincote is rather restrained and Cotswoldian, its design a mash of Hindu and Islam as seen through the eyes of the Raj. The interior, by the way, is Greek Revival. 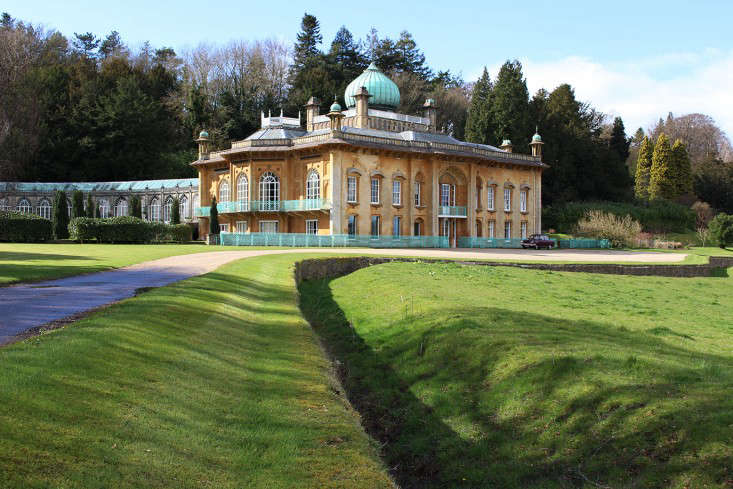 Above: Seen here from the edge of the ha-ha, the house, built with local Cotswold stone, lights up at dawn. The prospect is open and descending at the front and steeply wooded at the back. Sezincote is nestled in its place, looking entirely at home despite its foreign decoration.

This place should be celebrated and it has been, in poetry. Sir John Betjeman, a Bright Young Thing and regular visitor from Oxford in the 1920s, wrote of its onion domes and “amber stone,” concluding “‘Home of the Oaks,’ exotic Sezincote.” 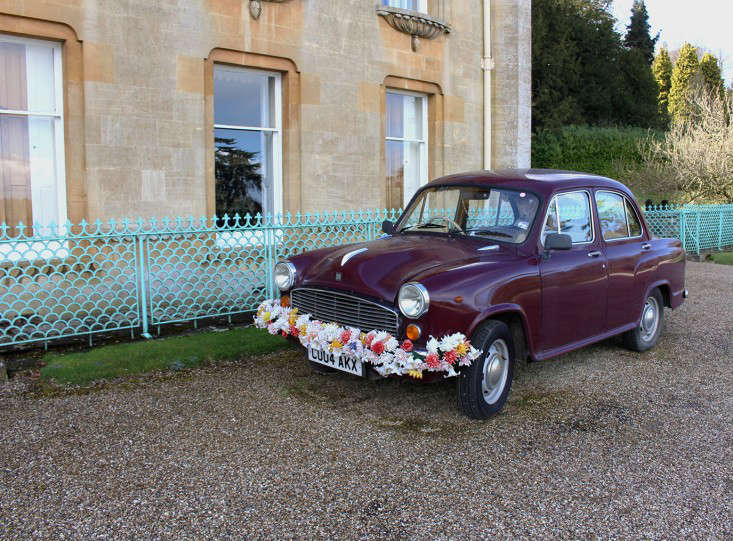 Above: An Indian taxi decorated in the traditional manner, on the drive.

Sezincote, pronounced “Seezinc’t” is a derivation of the French word for oak (chêne) and cot, which is a common term in these parts meaning dwelling or shelter. The original estate was named after the trees; while they have some visual competition from the house, the trees remain magnificent. Some very grand old cedars of Lebanon dominate the landscape. Being more than 200 years old, they have been joined by younger specimens. 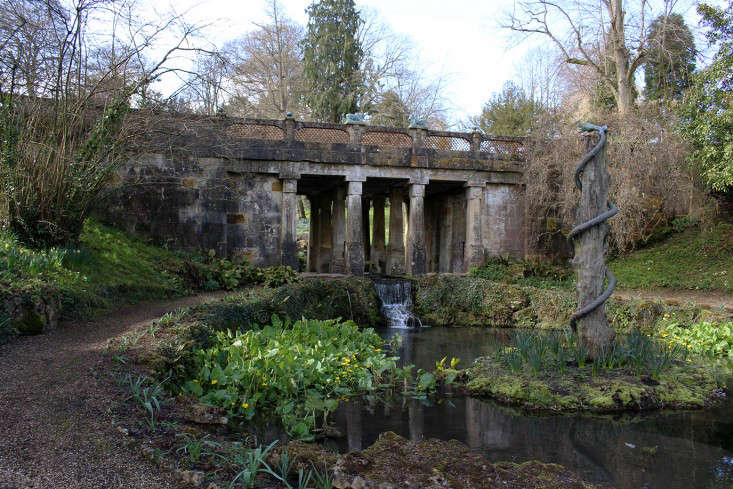 Above: A massive snake winds round a column emerging from a pond in the Snake Garden, just coming to life in spring. Beyond is the Indian Bridge, an entry to the garden from the end of an unusually long drive. There are no shortcuts here: the drive goes on and on, casually winding around the countryside as the first-time visitor is given little hints of what is to come via the eccentric lodge and the old oaks. 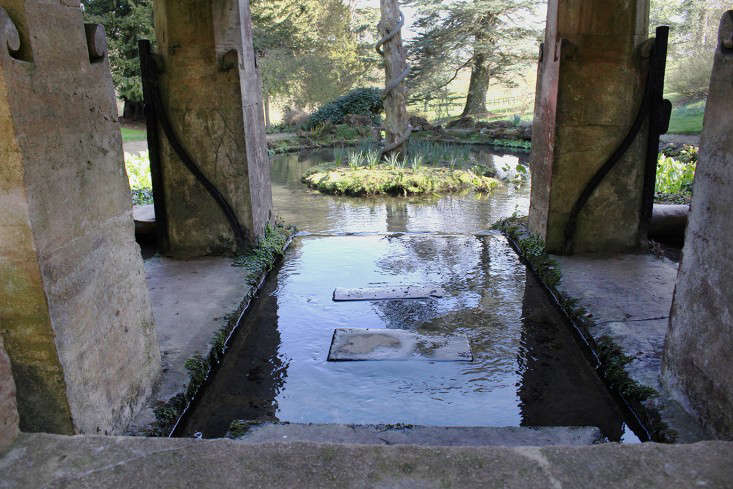 Above: A view from the stone bench found inside (and underneath) the Indian Bridge. Stepping stones lead to a waterfall in front and a pond behind. Needless to say it is peaceful, calm, and a little bit mystical. 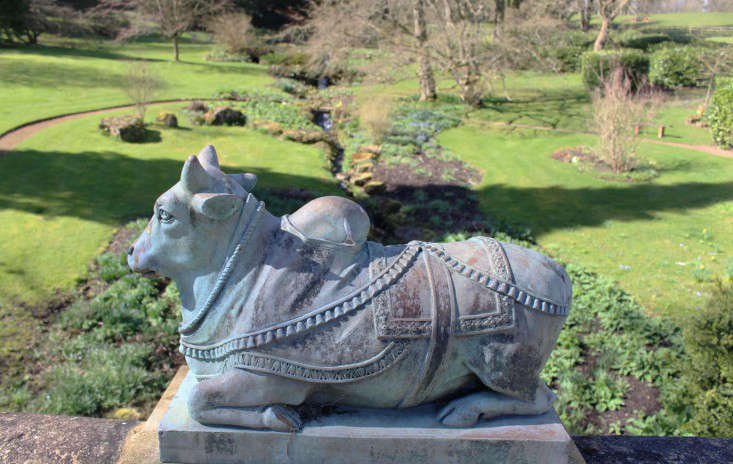 Above: Another view of Indian Bridge, with Brahmin bulls resting on either side of the balustrade. The section of garden spanned by the bridge is called the Thornery and is made up of streams, waterfalls, and ponds. The planting was overseen by one of the great plantsmen of the 20th century, Graham Stuart Thomas. He collaborated with Lady Kleinwort and her daughter until the 1980s, in between consulting work at Hidcote, ten miles away. 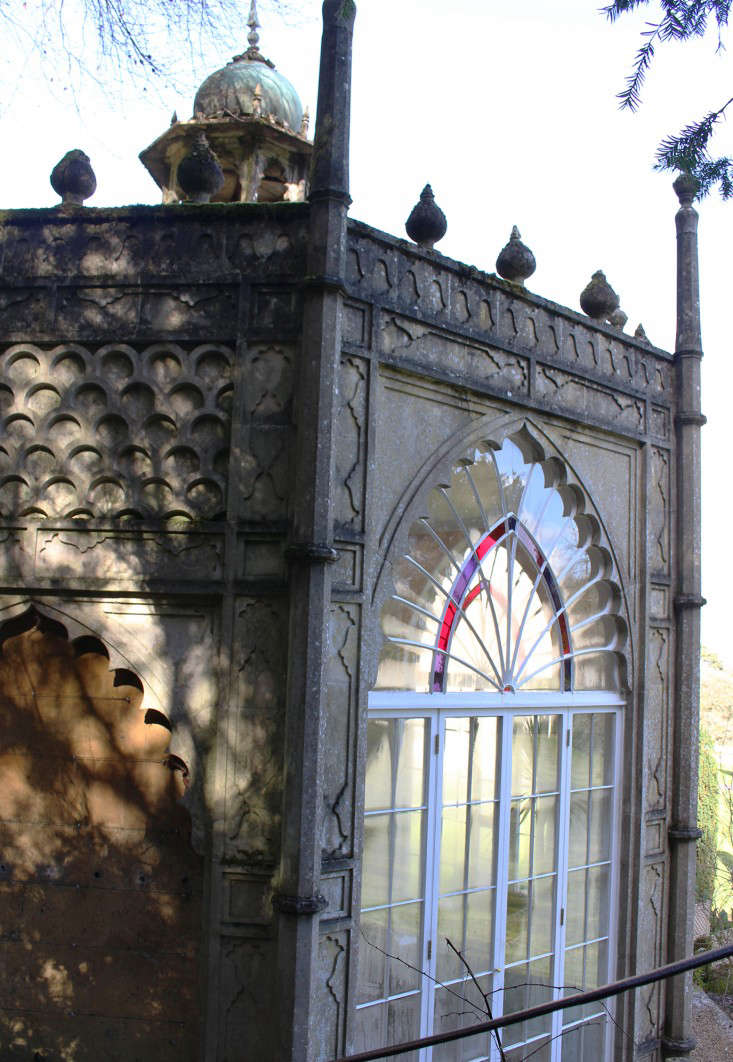 Above: The Orangery Pavilion, from the back. The Orangery stretches in a wide arc from the South Front, and they both embrace the Persian Garden.

The original design of the garden, carried out in part by the early 19th century garden designer Humphrey Repton, was determinedly non-Indian until the mid-20th century. During the Victorian Raj era, some ill-feeling developed towards “nabobs” (those employed by the East India Company, as the original owners were) and their displays of conspicuous wealth. Despite the minarets and peacock tail arches, there was an impetus to stick to the classical where possible. 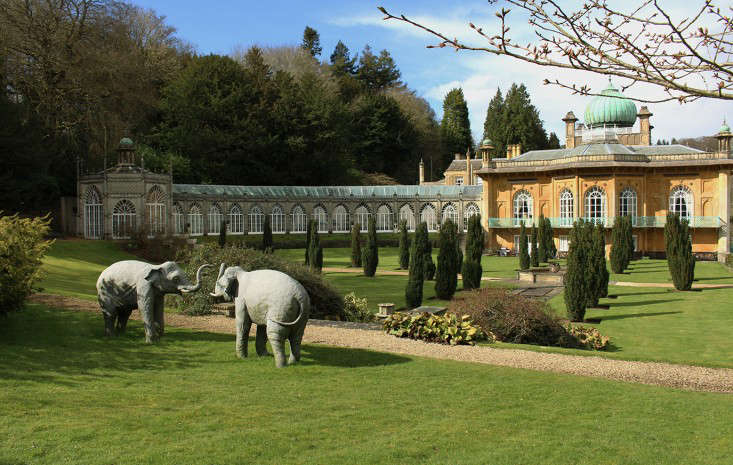 Above: The house was billeted by the army during the Second World War and was sold in a sorry state in 1944. The new owners, Sir Cyril and Lady Kleinwort, remade the South Garden (Above) as a Persian Paradise Garden. This style, in which crossing canals symbolize the meeting of humanity and God, is famously seen at the Taj Mahal in India, a leftover from the Mogul dynasty. British fastigiate yews were chosen over the more traditional cypress because of their hardiness. 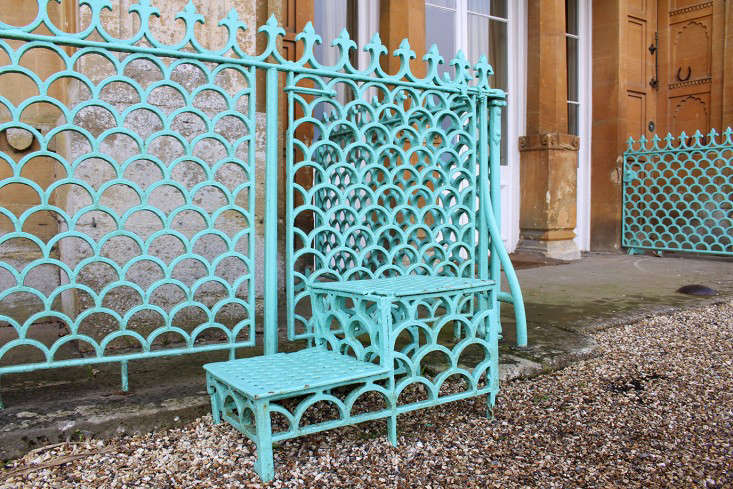 Above: The front door is flanked by horse mounting steps to either side. The turquoise estate colors are a brilliant complement to both the stone, arguably “oranged” with a copperas wash, and the jali work railings (Indian ornamental openwork).

For more estate colors, see: The Moody Palette of the English Country Estate. Buckingham Palace has also had this stone treatment, according to our friend Patrick Baty. 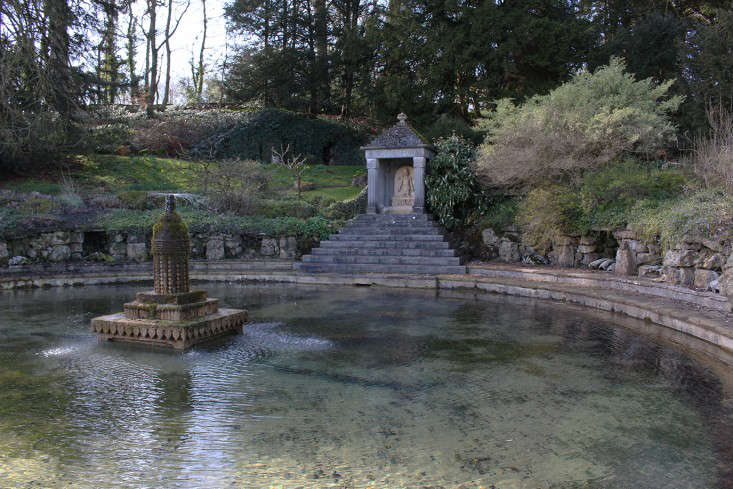 Above: The Temple Pool, which is a permanent gray-green due to the color of the clay. The temple is deicated to Surya, a Hindu sun god, and it is contemporary with the house. 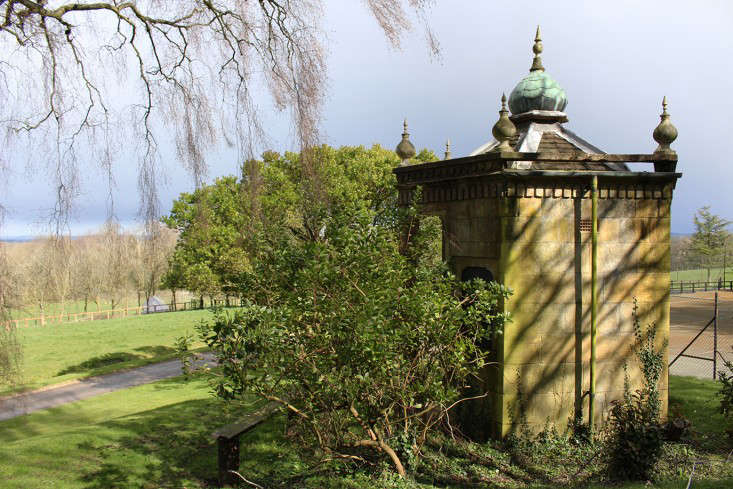 Above: The back of the Tennis Pavilion, home to some deck chairs. The prospect from the house (and tennis court) is wide and glorious, overlooking the Cotswolds below, in the vague direction of Oxford.

Sezincote is literally across the street from Batsford (separated by miles of private drive). Why not visit both? See A Gothic Garden Visit, Courtesy of the Mitfords.

Steal This Look: A Fragrant Palace Balcony in India

Landscape Ideas: Boxed in by Boxwood? 5 Shrubs to Try Instead