The ancient Greeks loved symmetry for a good reason. As do Ken and Jean Victor Linsteadt–for the same reason. By adding stone walls and a staircase to bisect and subdivide their sloped backyard into a series of mirror-image garden beds, the Mill Valley, CA couple have created a calming sense of balance.

Both the house and the garden were wrecks when the Linsteadts, who lived around the corner at the time, bought the property and overhauled it in 2007. Perhaps it’s no wonder the Linsteadts share a penchant for proportion–he’s an architect and she’s a writer–or that their first impulse for the garden was to establish an overall organizing principle. “The original garden, when we first saw it, was overgrown and had one falling-down wall somewhere in the middle or it,” says Jean. “It needed the structure of terraces.”

What is surprising–and makes the garden particularly charming–is how cheerfully the couple also chose to undermine the visual effect of that perfect symmetry. This is a garden where the plants are encouraged to be messy. Beans are taking over an arbor in the kitchen garden. A hedge of lavender is creeping over a wall. Climbing roses are running amok and threatening to overthrow the back fence. “I like the contrast between the way the stone walls create an overall organizing structure while within them the garden can loosen up and grow a little wild.” says Jean. So do we.

One morning last week Jean gave us a tour:

Photography by Nicole Franzen for Gardenista. 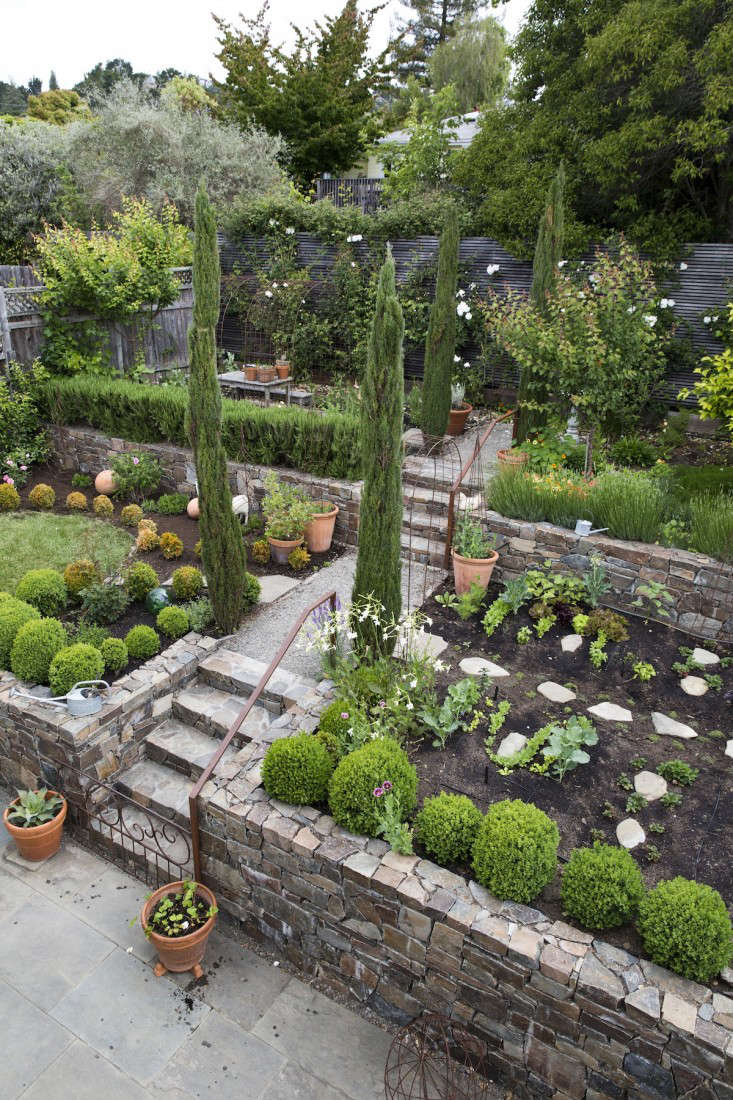 Above: The backyard. Four pencil-thin cypress trees line a central staircase that bisects the terraces, reinforcing the impression of a grid layout. The stone, hand-picked for color by architect Ken, is Elk Mountain. 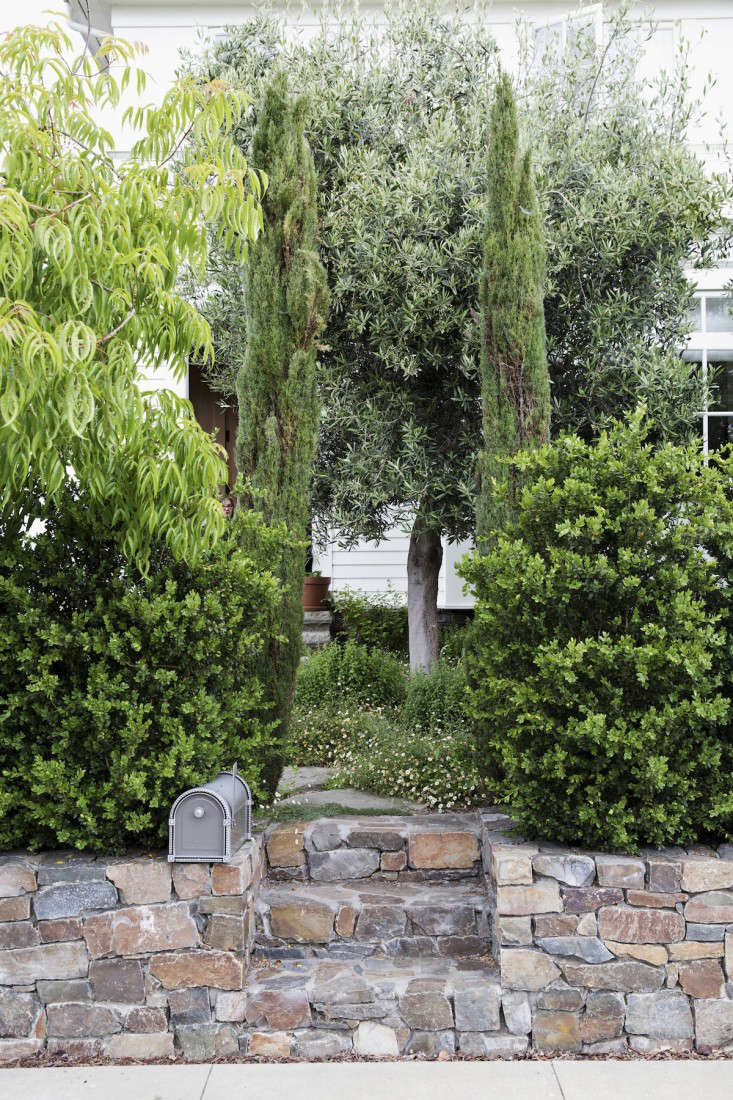 Above: From the street, the house and most of the front garden are hidden, but a welcoming path invites visitors in. Here the stone is bluestone, hand-selected to match the brown and gray hues of the stone in the backyard. 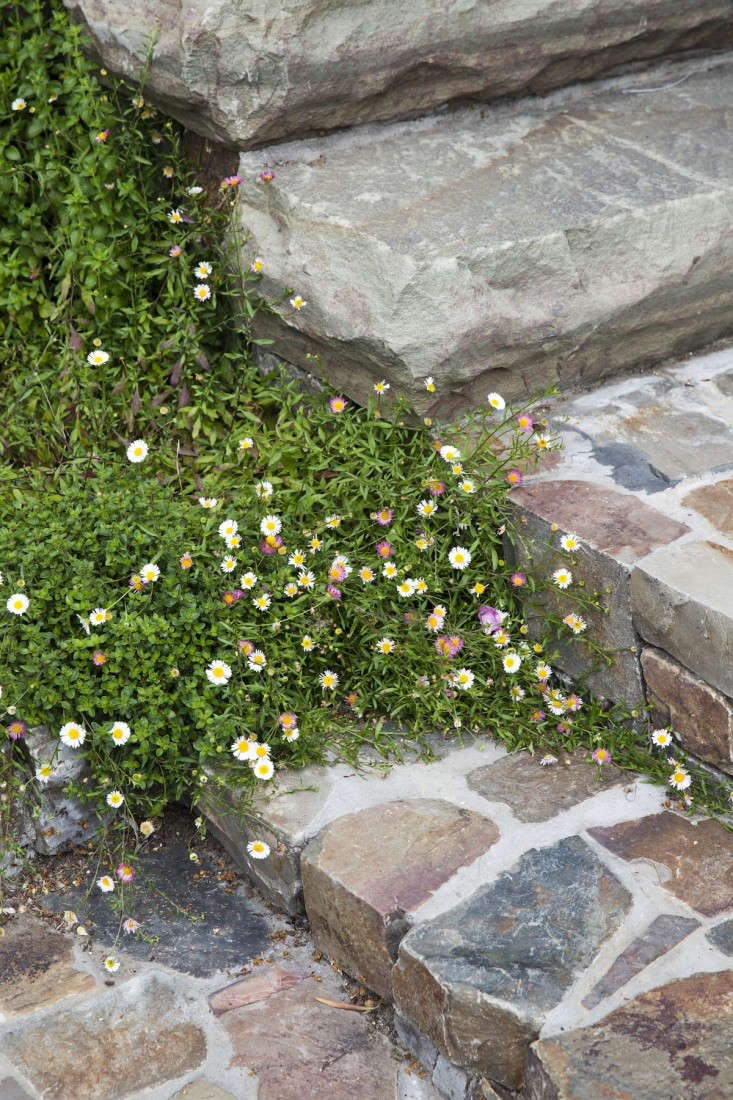 Above: Santa Barbara daisies–their Latin name is Erigeron karvinskianus–are planted as a low-growing ground cover to edge the front path. The tiny pink and white flower glow at dusk. A drought-tolerant perennial, Santa Barbara daisies thrive in partial shade in a Mediterranean climate. 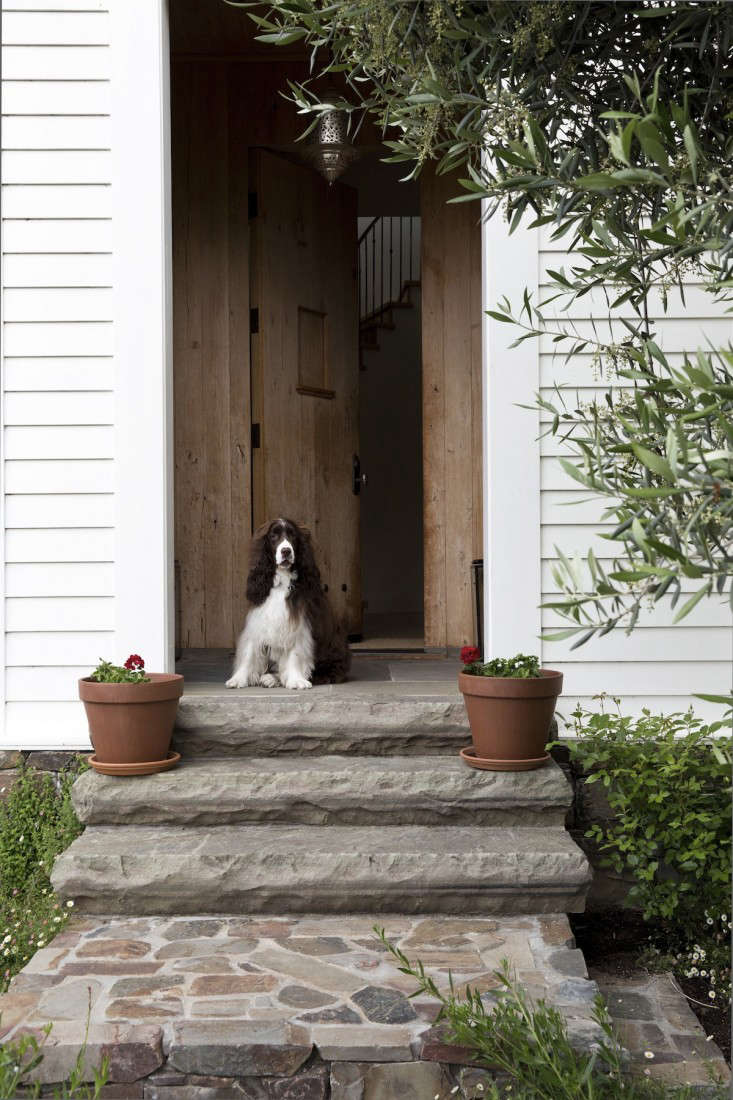 Above: King of the castle. The Linsteadts’ springer spaniel, Louis, greets visitors. 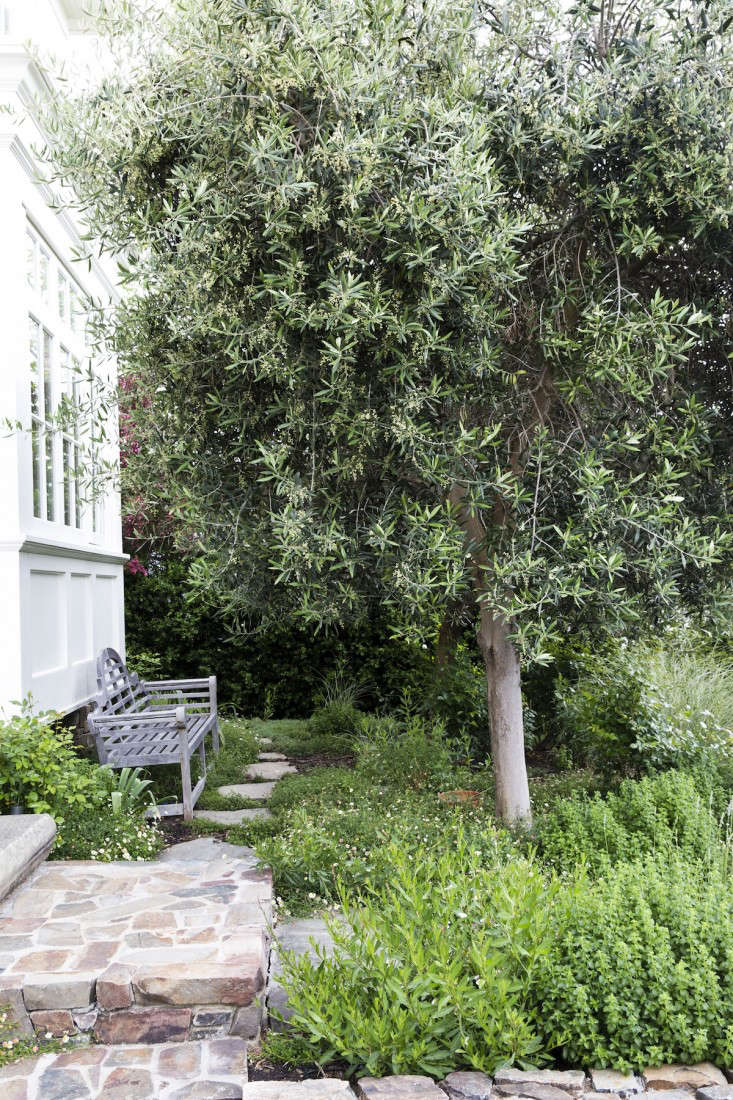 Above: “We’re hidden from the street, and my husband sits in front and smokes a pipe a lot,” Jean says. “It’s amazing the conversations he’s overheard from people passing by. 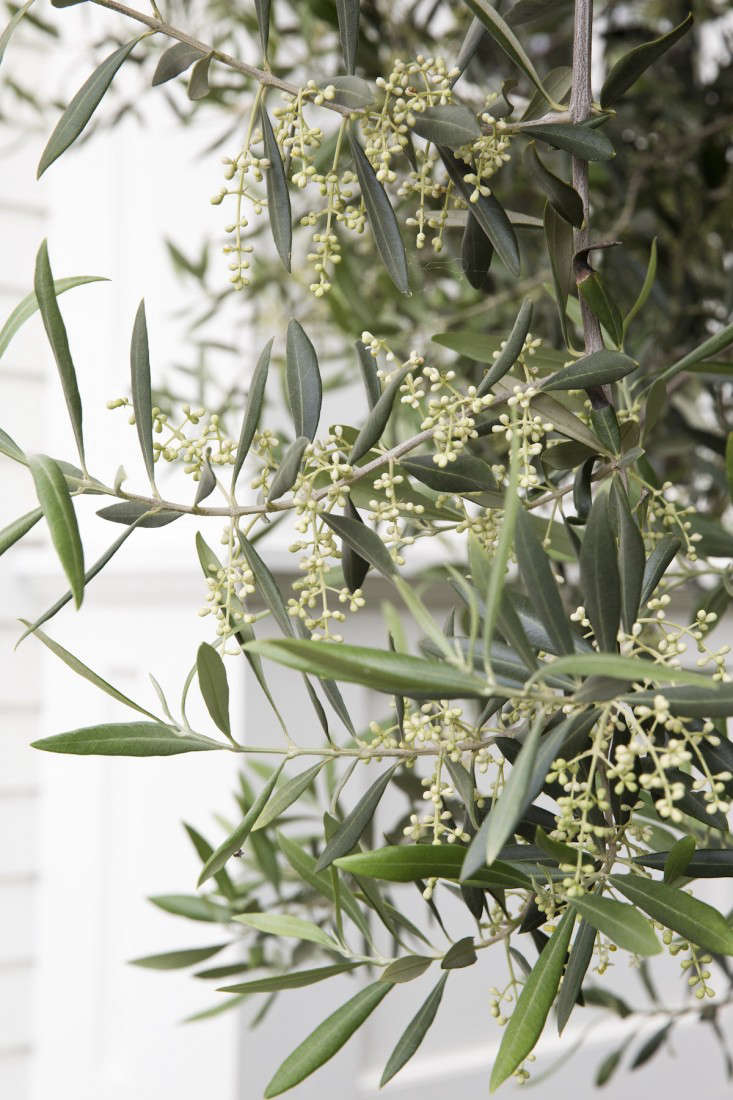 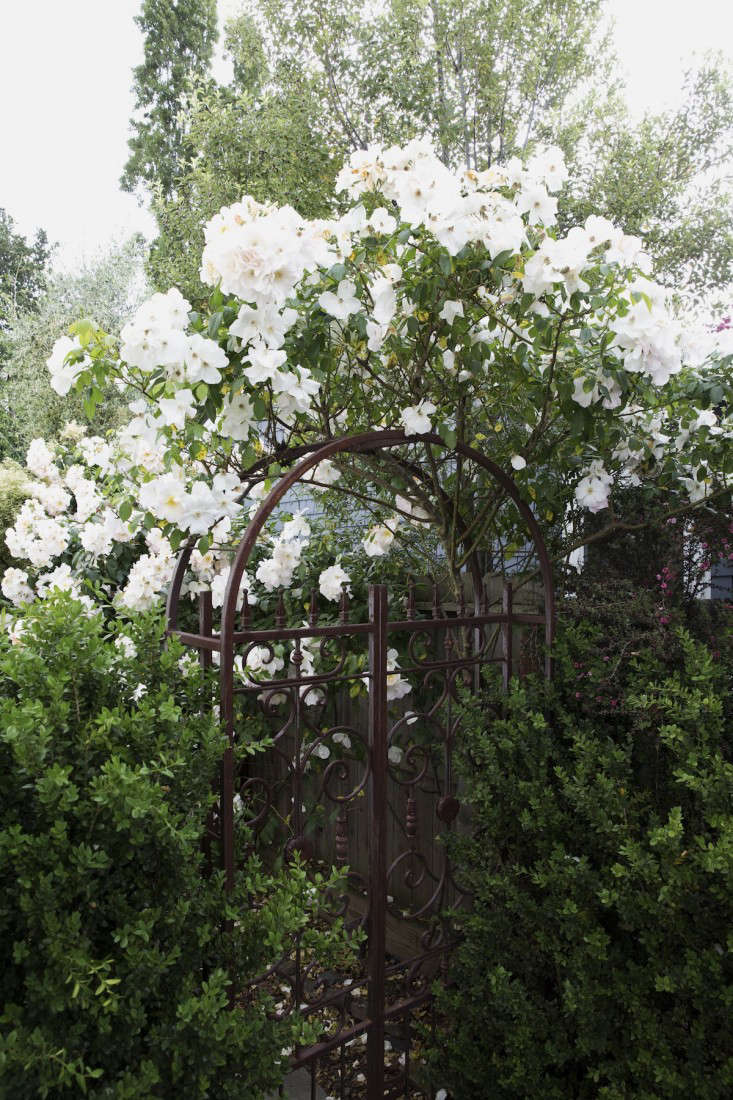 Above: A path runs alongside the house to connect front garden to back. Blowsy and billowing, a ‘Sally Holmes’ climbing rose covers the arbor that opens into the backyard.

“I especially love it at the height of summer when the roses and vines get all floppy and start to breach the bounds of the walls,” says Jean. “At the same time, I feel like the walls root the house and garden in the earth in a way that feels solid and timeless, even though the house is only seven years old.” 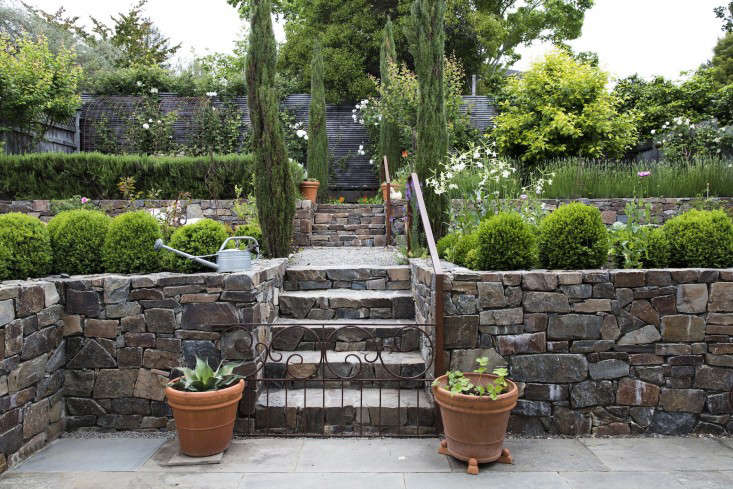 Above: In the backyard, the railing (and improvised dog gate) are weathered steel, allowed to rust naturally. 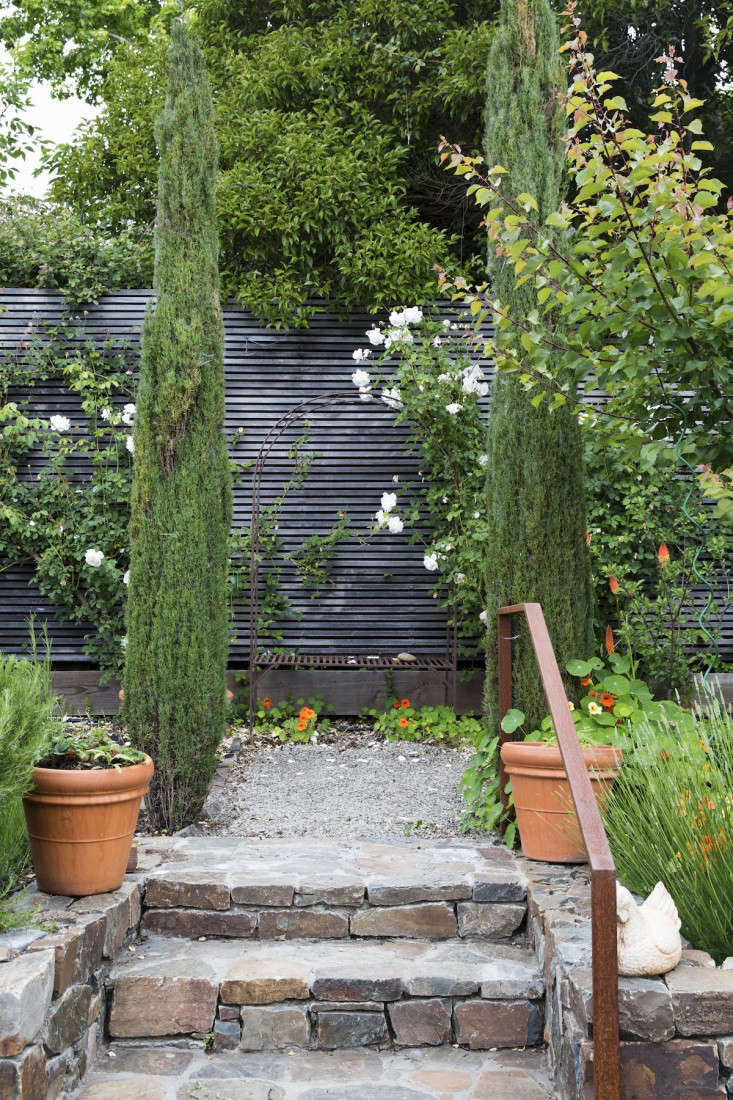 Above: The back fence, built by Ken Linsteadt and his son over the course of about six months, is constructed of 2-by-2-inch lengths of wood. In spring, the fences are covered by the prolific blooms of climbing ‘Cecile Brunner’ and ‘Sombreuil’ roses. 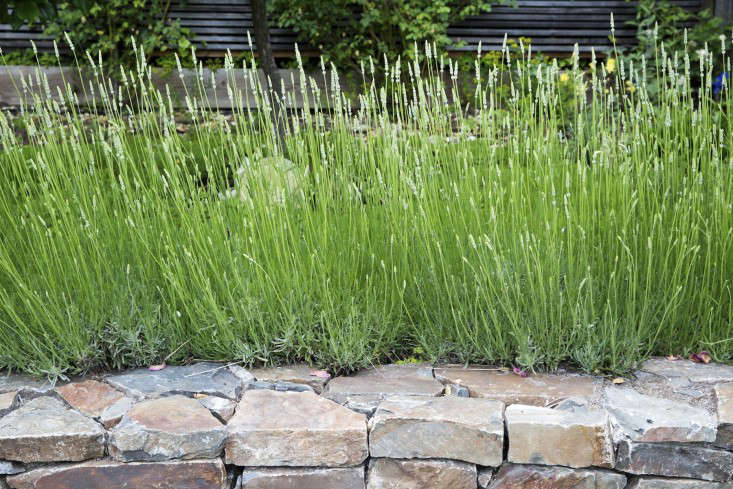 Above: Lavender is planted as a low hedge at the edge of the top terrace. Like many of the other plants in this garden, lavender is drought-tolerant and happy in a Mediterranean climate. 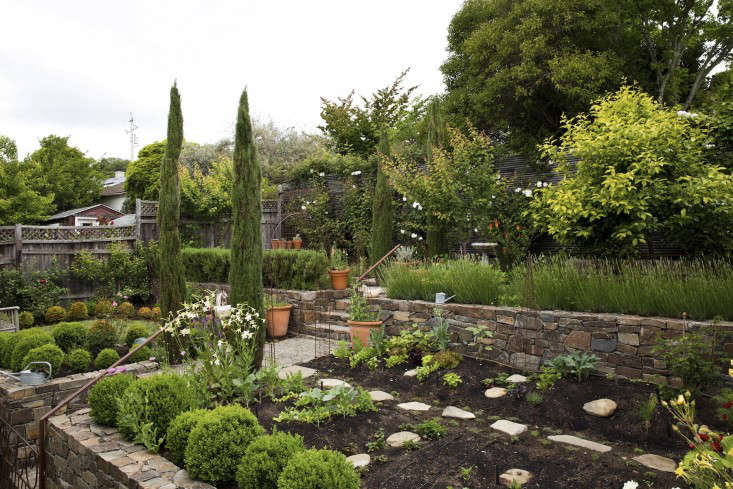 Above: Below the lavender, two beds on either side of the path are planted with herb and roses and edged with boxwood. In the distance, on the upper terrace (L), is an iron arbor from Cottage Gardens in nearby Petaluma. Beans grow on the arbor in spring and summer. “Even in the winter, when nothing is going on, the iron arbor and the fence are enough to be interesting,” says Linsteadt. 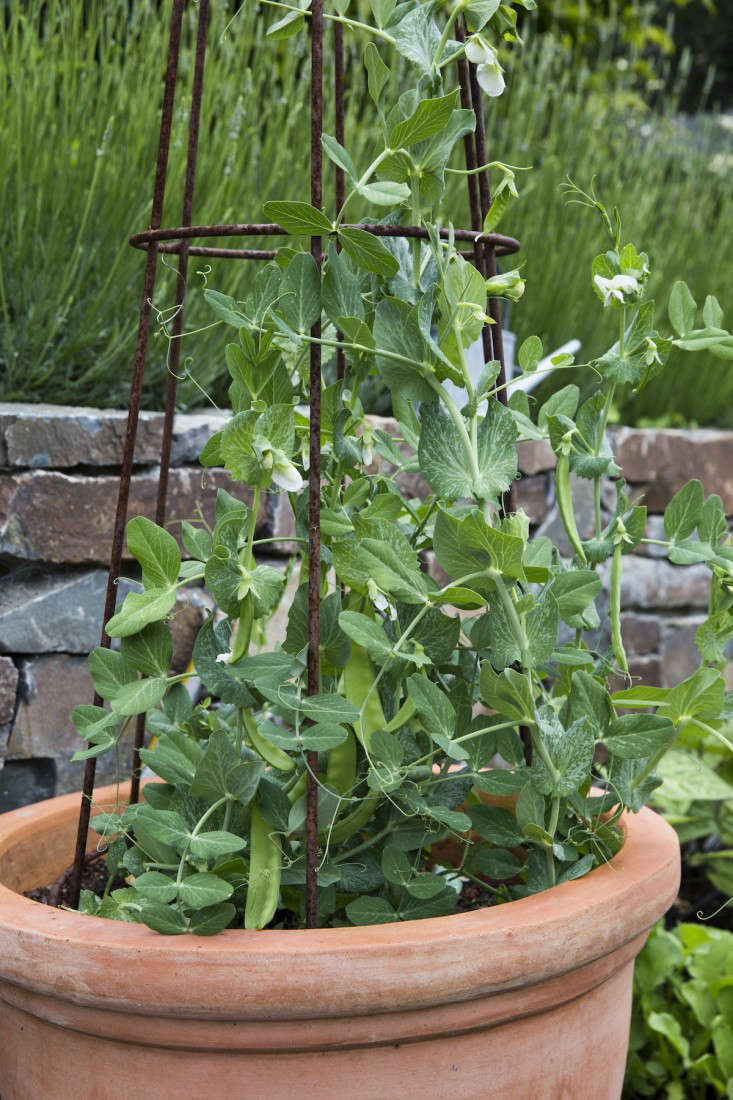 Above: Potted plants are trained on metal tuteurs that echo the vertical shape of the cypress trees. 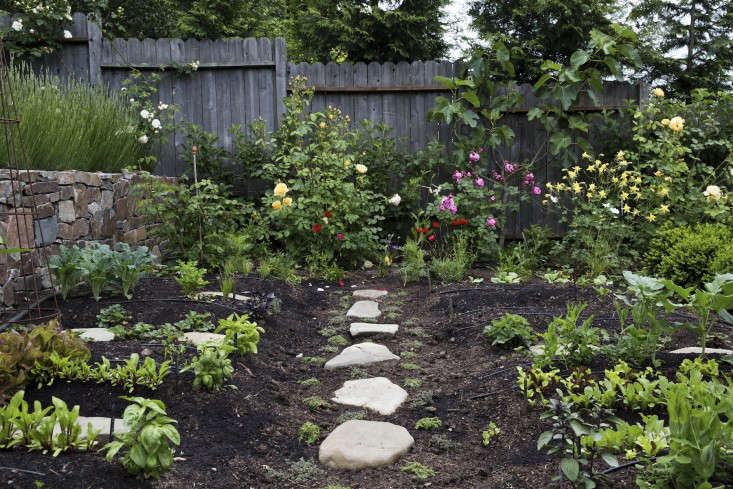 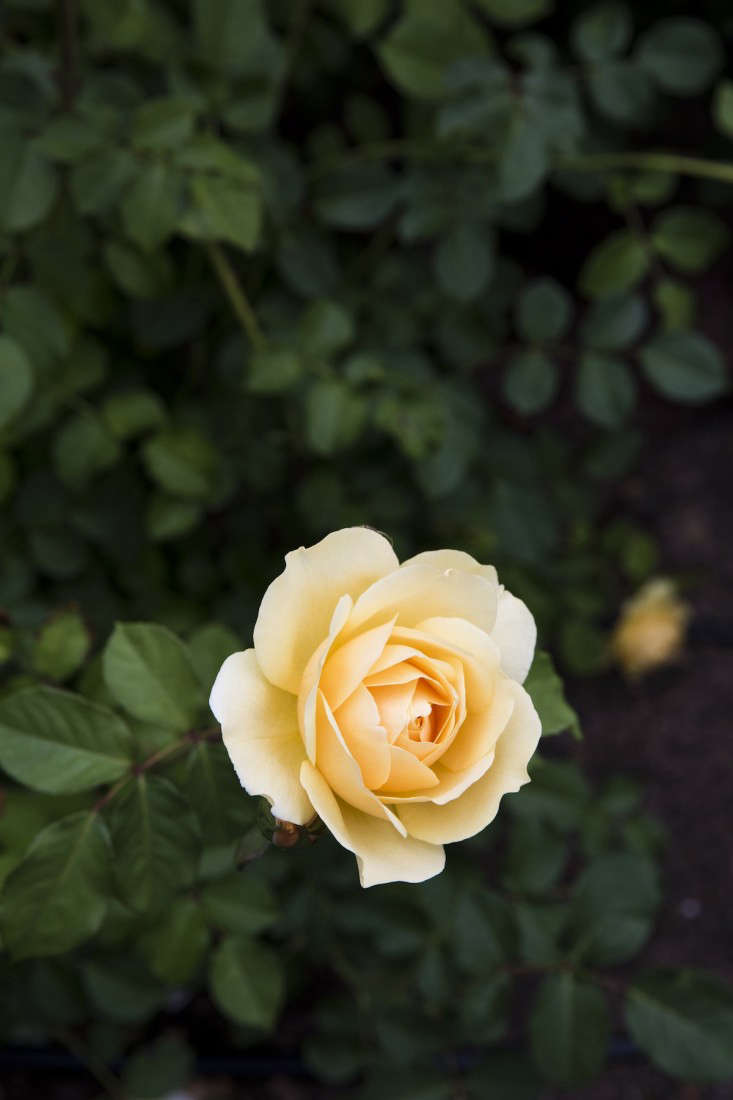 Above: A yellow ‘Graham Thomas’ rose bush is trained as a shrub. 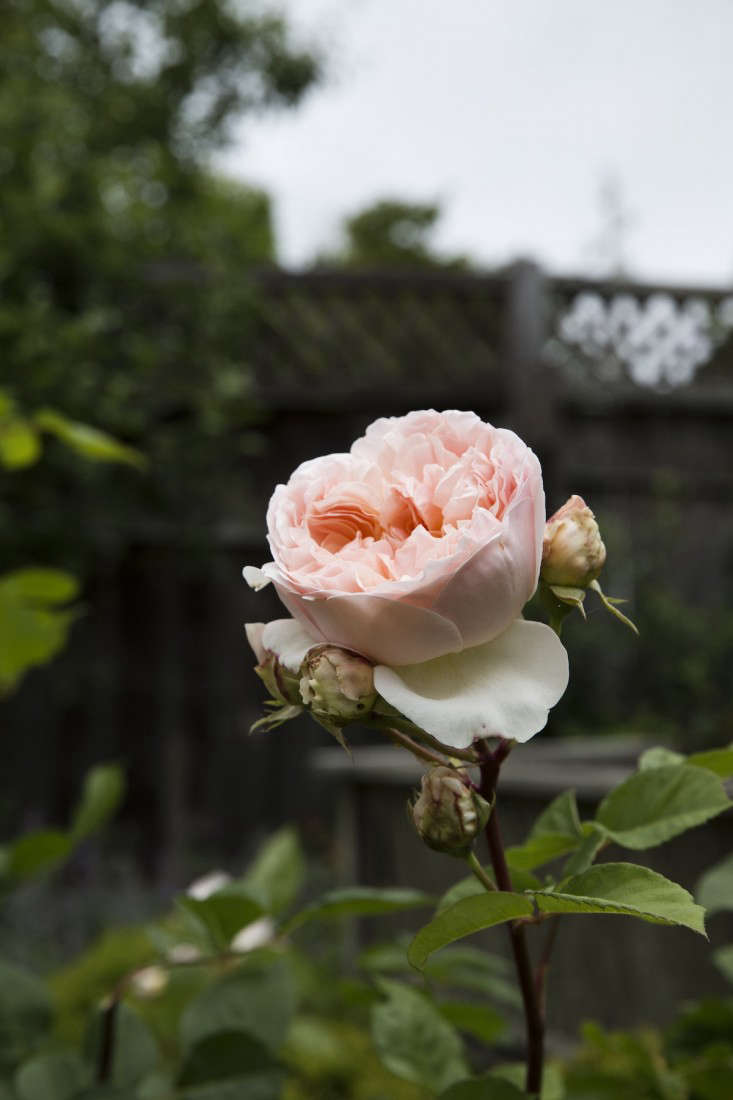 Above: As ruffled as a peony, ‘Abraham Darby’ is also trained as a shrub (rather than as a climber). 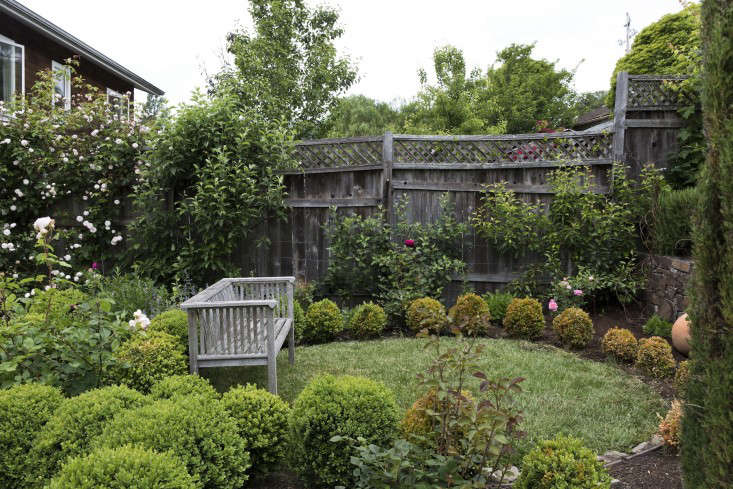 Above: At the top level of the garden is a patch of lawn ringed by boxwood. 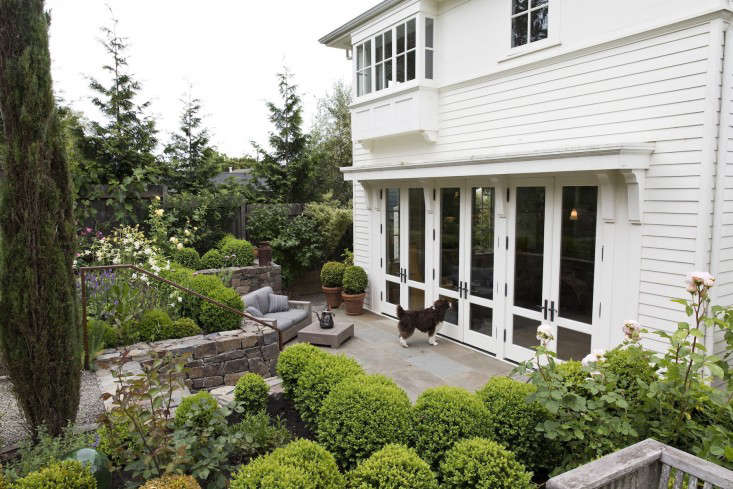 Above: Louis on the patio waits patiently (more or less) to be let indoors.

Above: The view from indoors; this is a garden that brings the outdoors in year-round.

Are you in the throes of designing your own Mediterranean garden? Get more ideas from Rehab Diaries: Rescuing a 100-Year-Old Garden.  And for more of architect Linsteadt’s work, see Steal This Look: Belgian-Inspired Kitchen by Ken Linsteadt Architects.

Early spring is the season of hope: for the most b

A fence is the obvious choice, but there are many

Picture a house sitting in a meadow of California