Nearly 30 years ago, Anne Wareham and Charles Hawes came to Veddw, an ancient cottage on a property deep in a valley in Monmouthshire, South Wales. Neither of them is a professional garden designer, yet over the years the two have built a singular garden that reflects their own sensibilities and is influenced by both the surrounding hilly pastoral landscape and the property’s existing features. Gradually, they have reinterpreted these elements, creating a thoroughly modern ancient garden.

To me this is a garden of reflections. Veddw (pronounced ved-DOO) is full of contrasts, from the sculptured hedges that echo the Welsh hills to the inky surfaces that recast the surroundings. It is a combination of old and new, wild and tamed, casual and constrained. Its unifying elements are the simplicity of the plantings and the structure of the hedges and walls that enclose them. 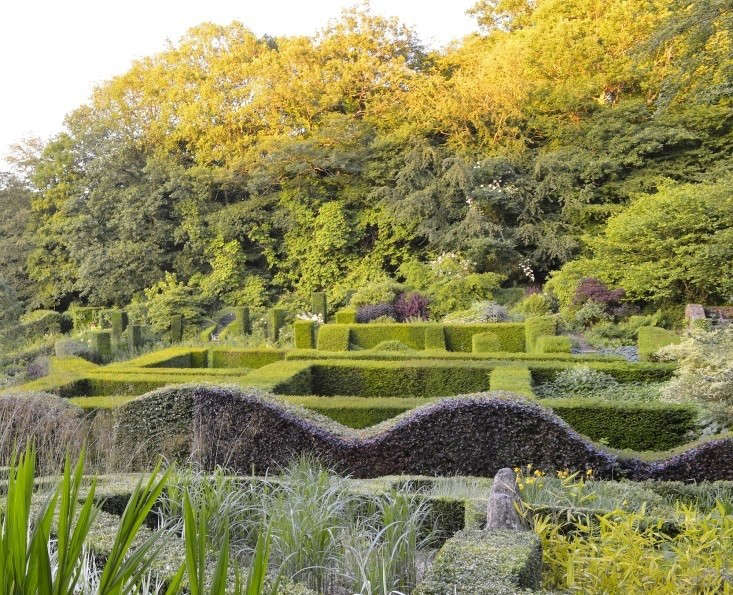 Above: Visitors enter the garden through a simple wooden gate and emerge at the top of a bowl-shaped depression. Looking down over a grass parterre, the garden slopes to a series of compartments framed by tall, undulating hedges of boxwood, beech, and yew. On the facing slope, the garden rises again to a meadow planting in what was once a sheep pasture. 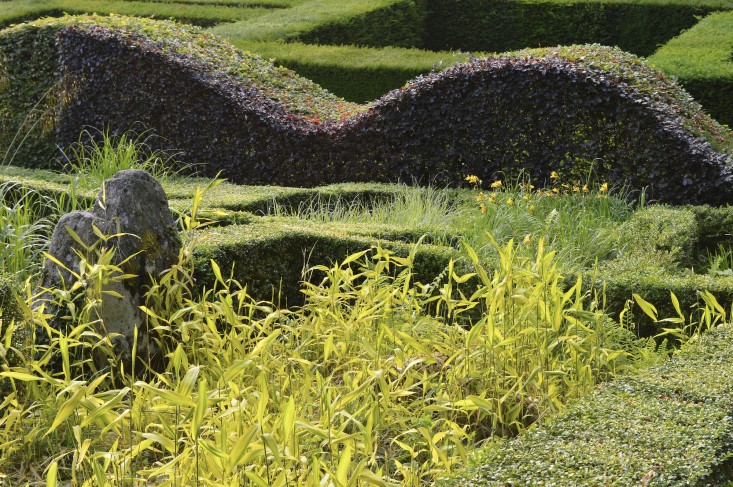 Above: Shaped into sinuous curves, the hedges echo the rolling hills around the valley, framing and enclosing diverse plantings, much as the surrounding fields and pastures are enclosed by ancient hedgerows. 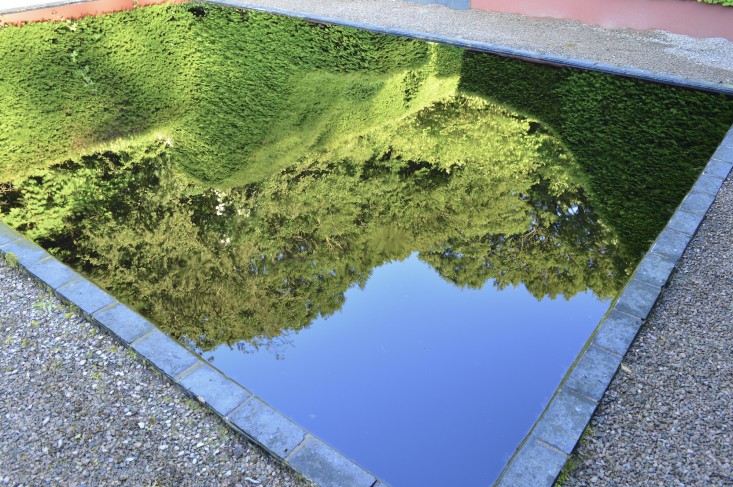 Above: Black dye deepens the water in the reflecting pool to a shimmering pitch that mirrors the surrounding trees and hedges. On its surface you can trace glimpses of passing birds and an occasional airplane high overhead. 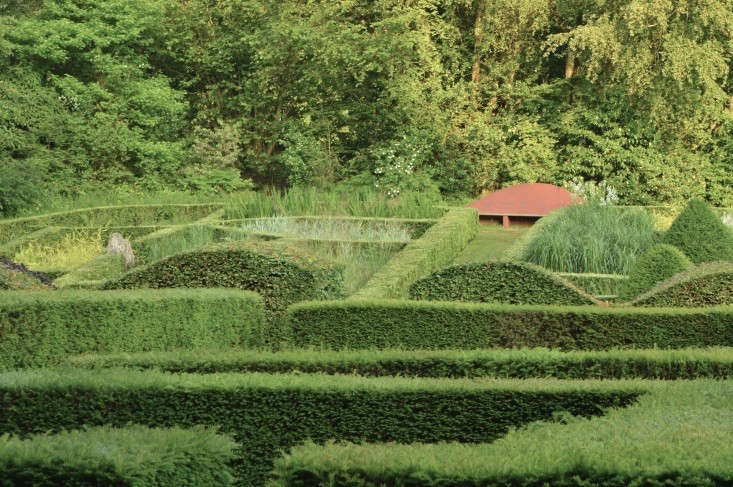 Above: The sloping terrain combined with the strong geometry of the hedges leads to unusual angles and planes in the garden, lending a sense of mystery and even disorientation as you pass through the mazelike parterres. 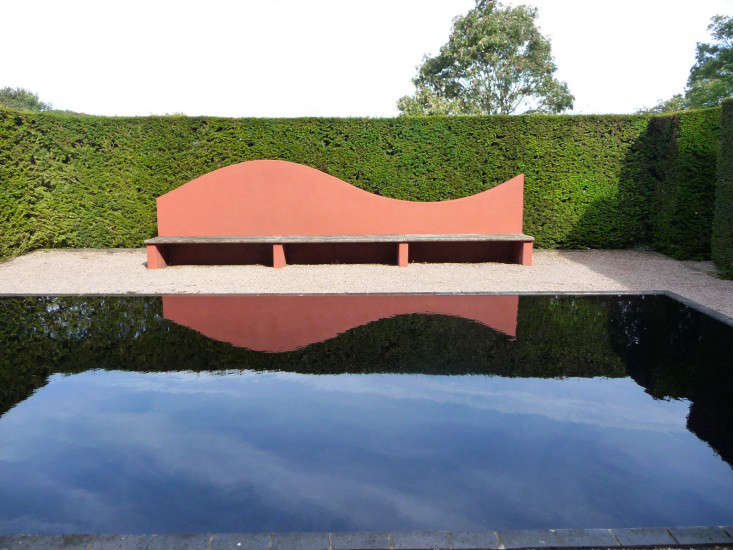 Above: The pool throws back a mirror image of a wave-backed bench framed by angular yew hedges and softened by a tracery of clouds in the sky. 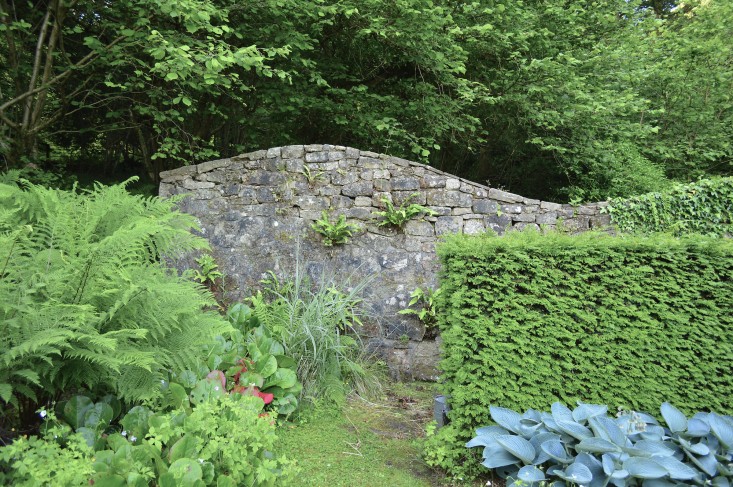 Above: When Charles and Anne first came to Veddw, they discovered a ruined cottage that had been abandoned for a century. Its stone walls have since been reconfigured into the signature Veddw curve. 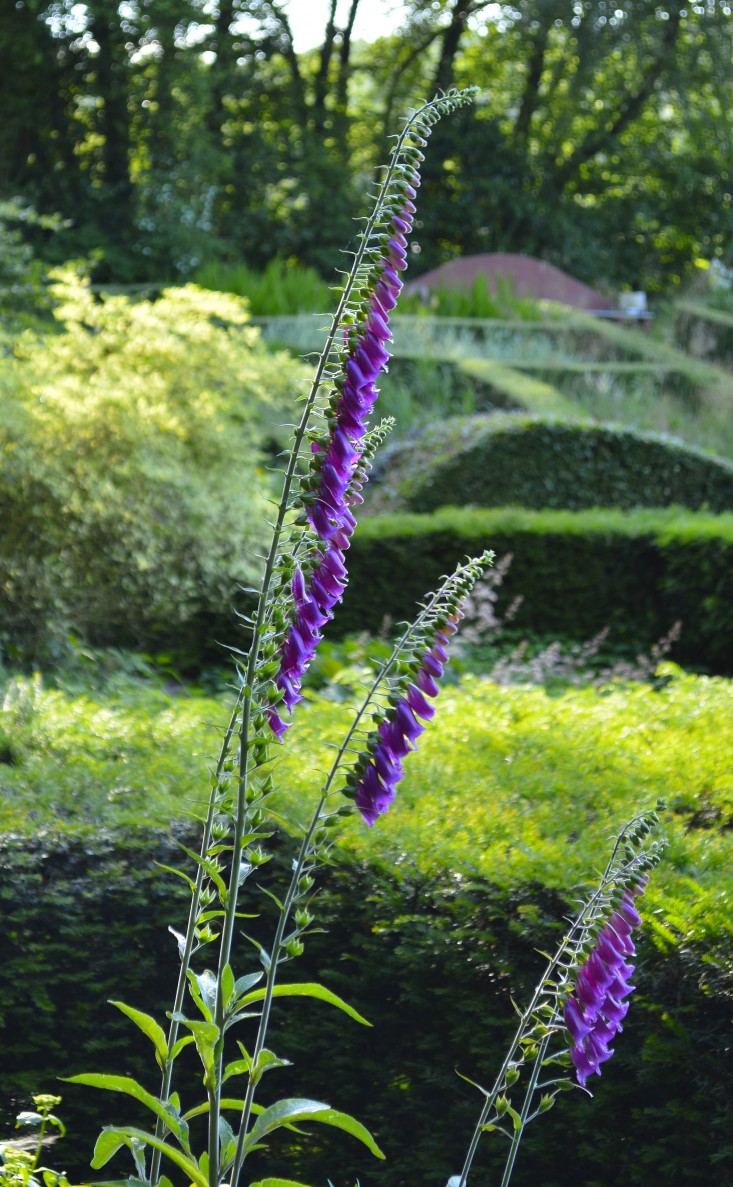 Above: At the south end of the garden, the setting midsummer sun catches the shifting angles of the hedgetops and backlights a volunteer foxglove. 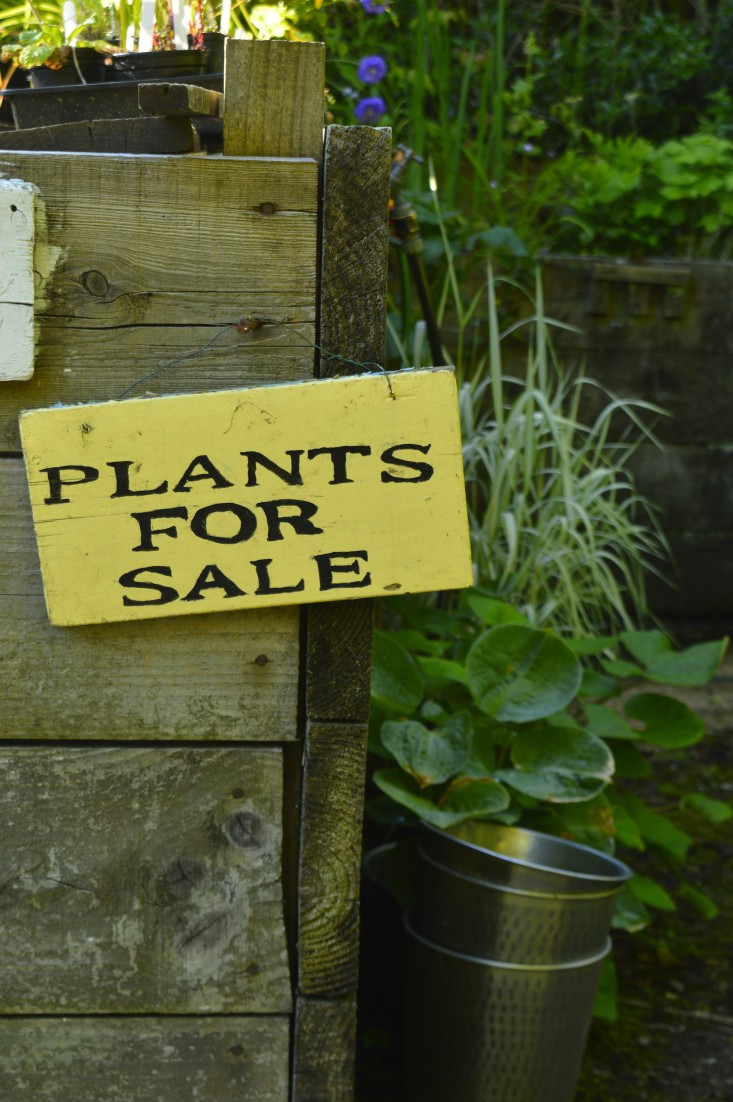 Above: Veddw is not a nursery, but some choice perennials and succulents are available for sale. The garden is open to visitors in summer for a small fee; the drive from London takes 2½ hours. 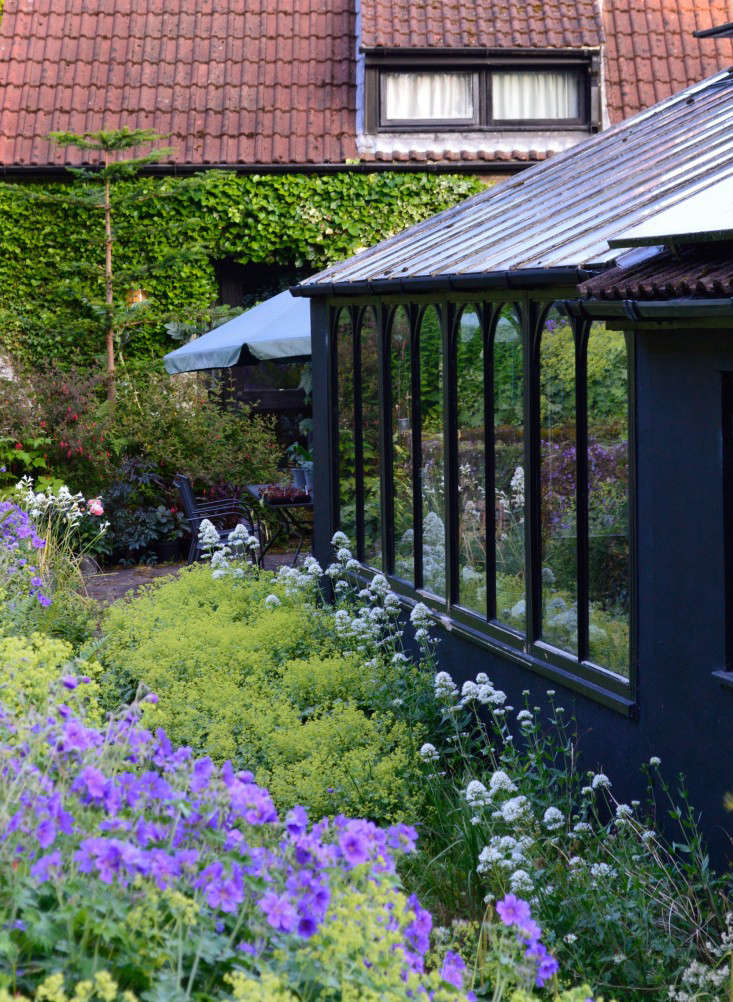 Above: A bank beside the conservatory is planted with frothy acid-yellow lady’s mantle (Alchemilla mollis), white Jupiter’s beard (Centrathus ruber “˜Alba’), and blue hardy geraniums. The curve of the red clay roof tiles resembles the benches and walls found throughout the garden. 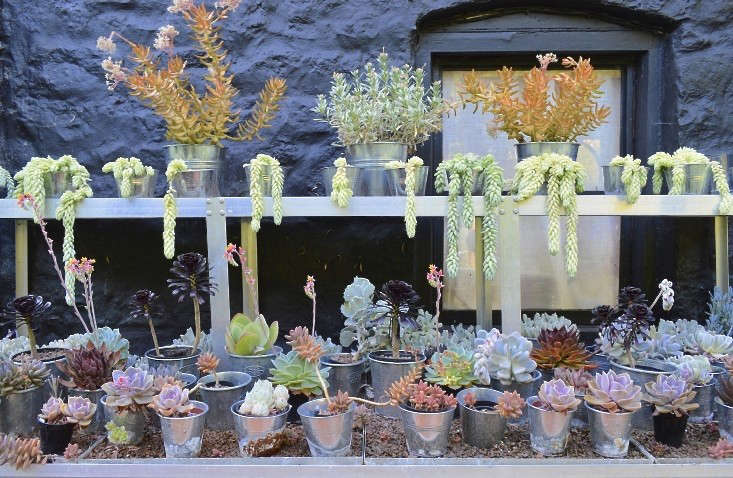 Above: Inside the conservatory, succulents arrayed in aluminum containers are set against a stone wall painted coal black, another contrast of the aged and the contemporary. Here, as elsewhere in the garden, the limited palette and repetition of plants bring a sense of order and calm. 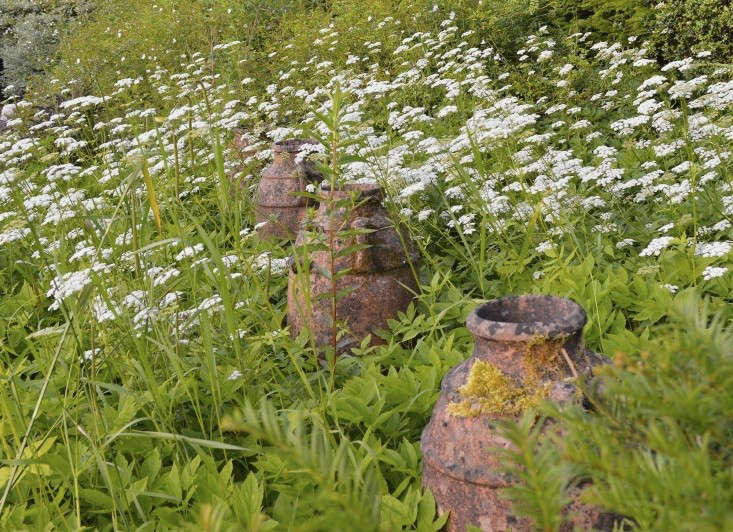 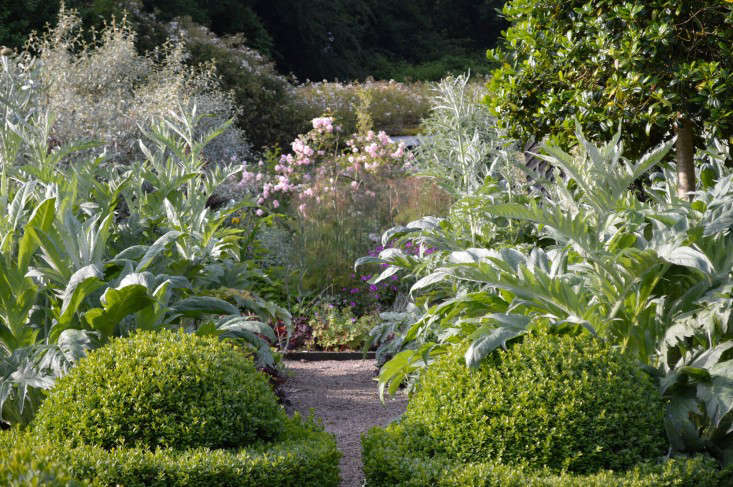 Above: On the north side of the cottage are some unexpected garden spaces, including a meadow and “Charles’s garden,” a former vegetable plot now punctuated with strictly ornamental cardoons whose leaves tumble over clipped specimen boxwood. 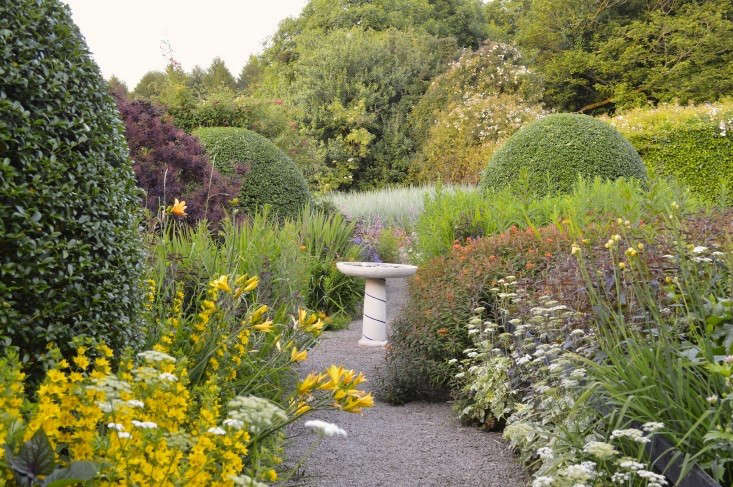 Above: Bright, warm-toned perennials like yellow day lilies (left) and burnt-orange Euphorbia “˜Fireglow’ (right) line gravel paths in the front garden. A custom stone birdbath is set where the paths intersect; Anne regularly fills it with shells, stones, and floating flowers. And since this forward-thinking couple embraces Twitter, she decided to paint their Twitter handles on the basin’s rim.