A week at Honey Grove in high summer is a week outside the rush of time. Named for the bees that Nao Sims started tending when she and her husband, Mark Sims, still lived in Vancouver eight years ago, Honey Grove is a six-acre sanctuary in the midst of young fir and alder forest halfway up Vancouver Island near the Comox Bay.

A small slice of heaven, Honey Grove boasts a large flower and vegetable garden, a young orchard, chickens, ducks, and a fledgling salumi business made from lovingly raised free-range pork (currently in the works by Nao’s brother Cohen, who studied traditional Italian charcuterie practices in Italy). Farm-to-table dinners are hosted by Cohen and his wife, Katie (an expert in all things gastronomic, who taught a Food and Sustainability course for students at the University of Siena while running the internship program at Spannocchia in Tuscany), and Mark’s brick-oven bakery, where 96 loaves of wood-fired bread are baked weekly. 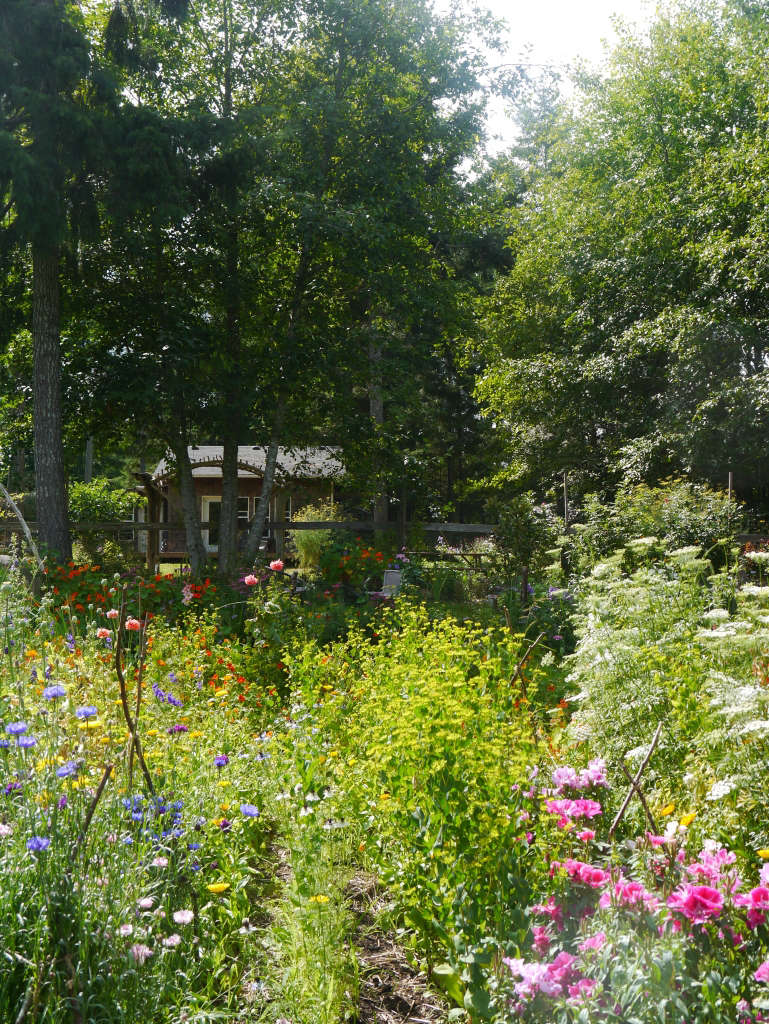 Above: The property came with a small building that Nao and Mark transformed into a fully self-catering guest cottage, visible in the distance beyond rows of Godetia, cornflower, and Queen Anne’s Lace. 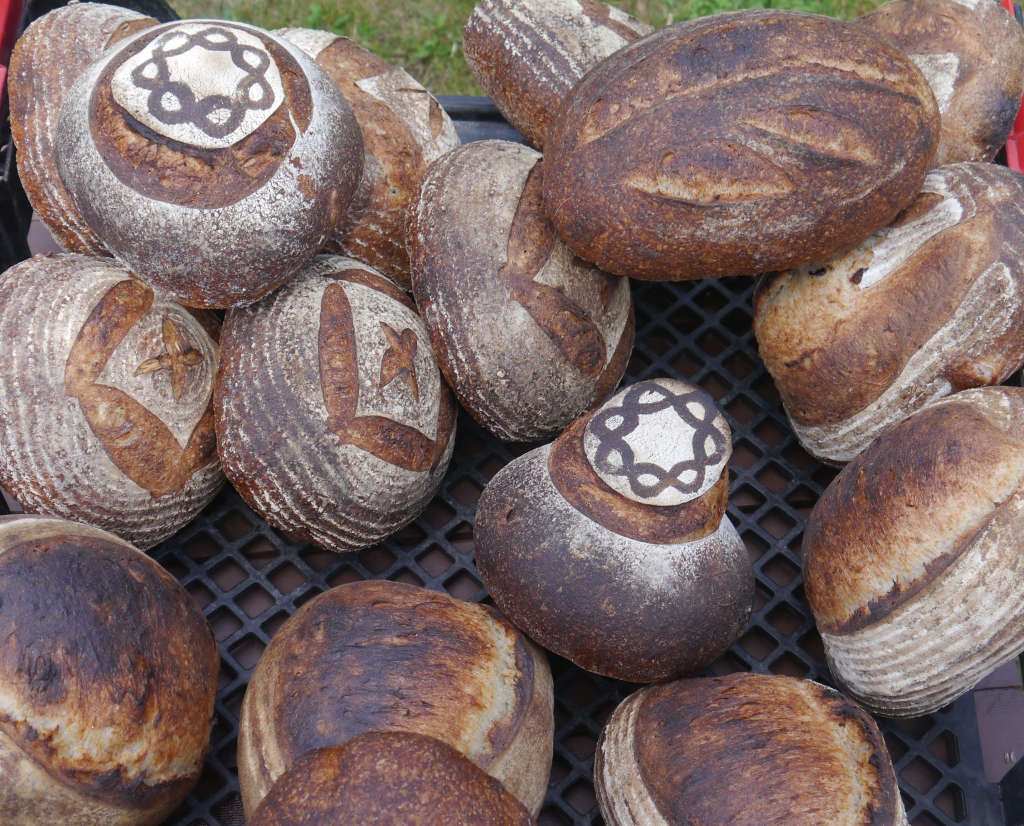 Above: Visitors enjoy a complimentary breakfast of Mark’s fresh sourdough bread, eggs from the chickens, jam from Nao’s raspberries, and, in summer, ample bouquets of flowers from the garden. 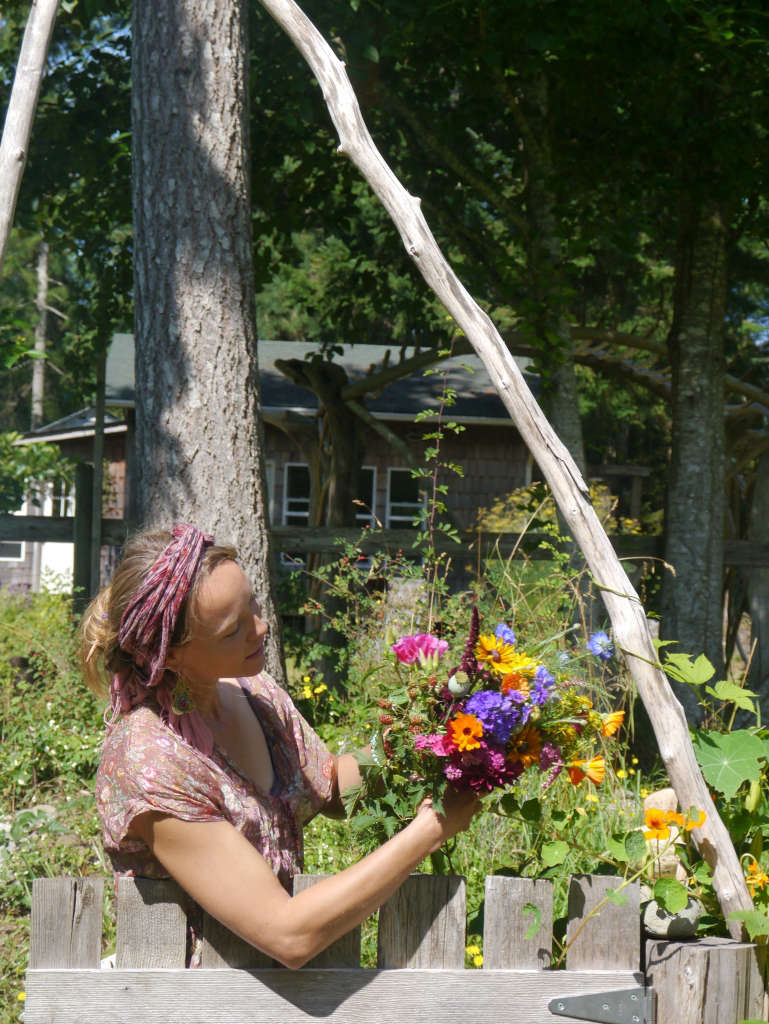 Above: Nao sells bouquets from her garden at the Saturday Farmer’s Market in Courtenay, alongside Mark’s best-selling bread. (Stay tuned for more on Nao’s flower arrangements, coming later this week.) 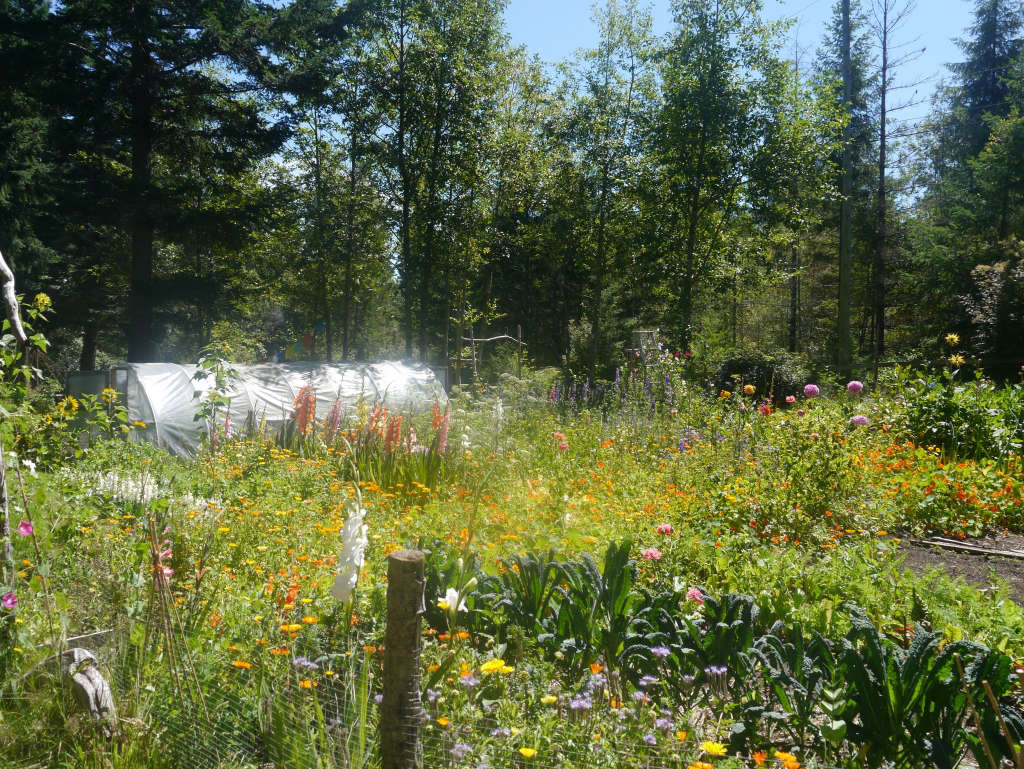 Above: Alongside rows of cutting flowers and a profusion of nasturtiums, beloved by her seven hives of bees, Nao’s garden provides a near year-round supply of potatoes, onions, and garlic, tomatoes canned for winter enjoyment, and a summer-long explosion of lettuce and kale. But even at its peak of blossom and bloom, Nao is already planning for autumn, tucking in seeds for a crop of fall carrots. 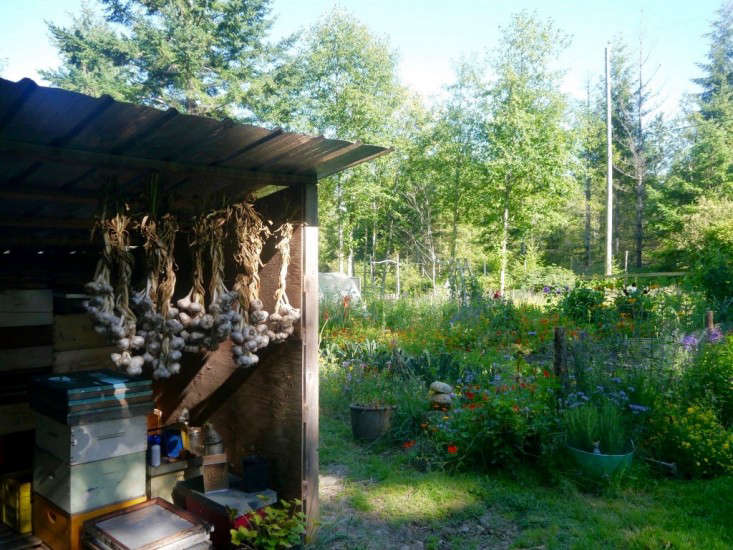 Above: “A gardener’s work is never done,” laughs Nao, “except for the darkest, coldest months around Christmas. Our first year here, we worked to get the land ready for a spring garden all through the rainy season. We were wading through mud, cold and exhausted. Only later did we realize that none of the other locals were working. They all take a break in winter.

“One of our neighbors kindly advised us, after that first season, to always take a rest in winter. Otherwise, you don’t have enough energy for the rest of the year,” says Nao. ” I understand what she means now, and always take her advice. Summer is so full that when the season finally shifts into winter, we are all ready for the break. But while it lasts, it’s exquisite.” 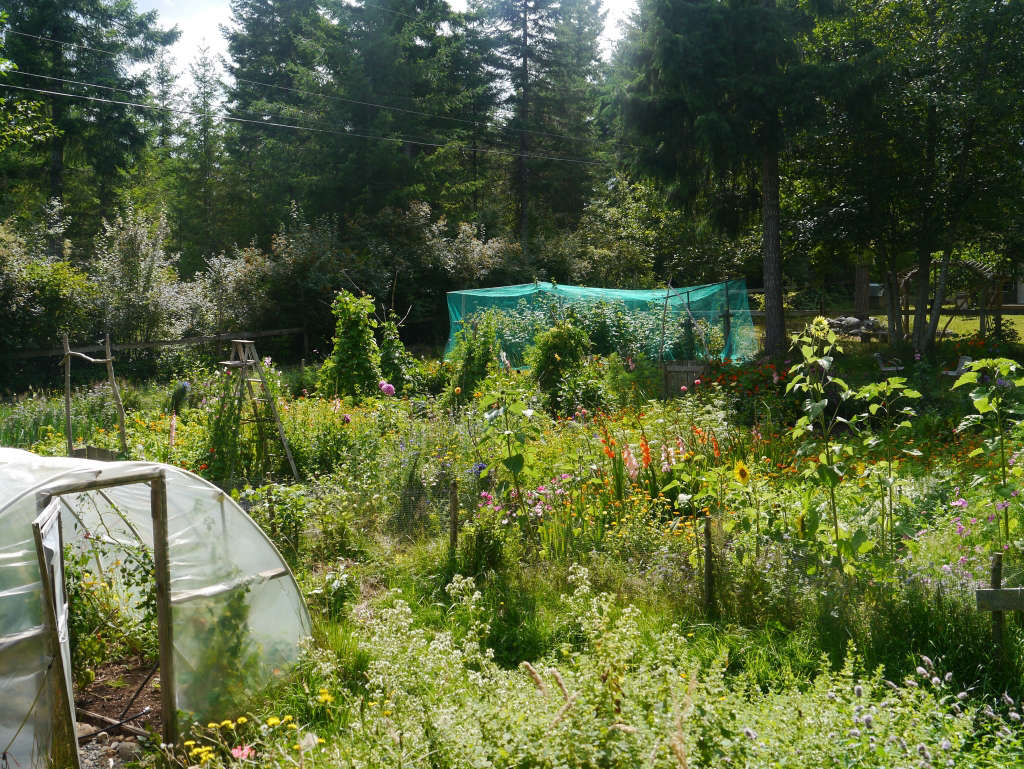 Above: The summer garden, with raspberry canes under netting in the background, and a polytunnel for tomatoes and cucumbers in the fore, as seen from the top of “Herb Hill.” The garden’s summer glory is the peak of many months of careful tending. In the fall, after the harvest is in and the flower beds are resting, Nao supplements the soil with organic aged steer manure. She also takes trips to the nearby seashore after November storms to gather seaweed to feed the beds.

In mid-February, it’s time to start sprouting seeds in the greenhouse, so they can be transplanted into the garden by April, after the last frost. Others Nao sows directly in the garden in mid-March when the days start to get warm again. 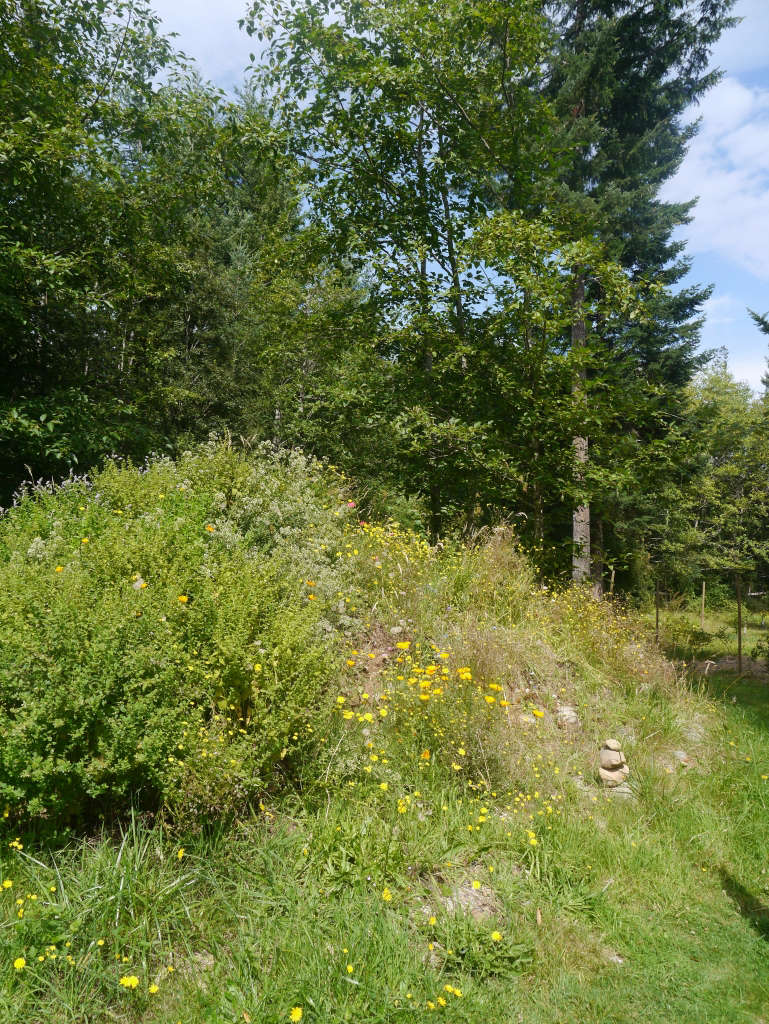 Above: Five years ago, when the land for the garden was cleared and excavated, “Herb Hill” was a daunting pile of rocks left over from the process. When the man with the excavator refused to cart them all away, Nao wasn’t sure what to do with them. But with a little advice from her father-in-law, the retired senior advisor for the Royal Horticulture Society of England—a very good person to have on  your team—Nao decided to sow the mound with flowering weeds, the kinds that need little tending, and are beloved by bees.

Now, the mound of rocks is a riot of lemon balm and St. John’s Wort, flowering oregano and buckwheat, cornflowers and grasses and yellow cat’s-ear flowers. It is bee-heaven. 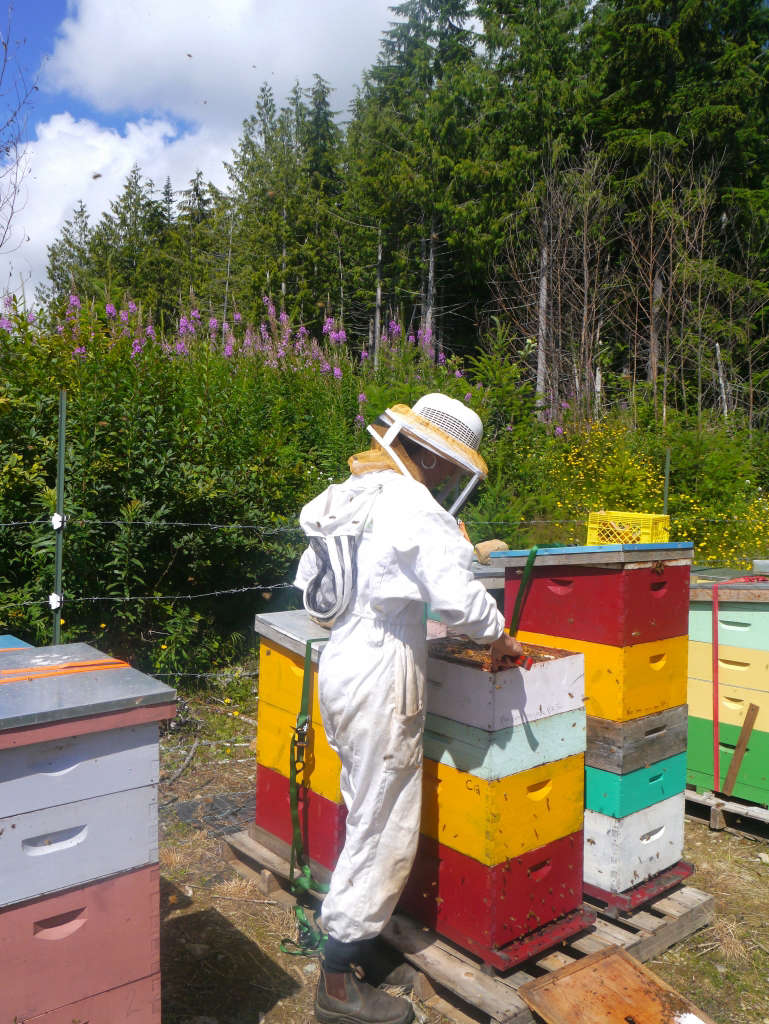 Above: Nao tending her hives up the mountain, where she takes them in summer to forage the flow of fireweed nectar as the purple spires bloom. “In many ways, Honey Grove started as a sanctuary for my bees,” says Nao. And it surely is one—I’ve never seen a garden so vibrant with life, nor tasted honey that comes even close to the deep amber sweetness of Honey Grove’s own.

Honey Grove has become a sanctuary for people too, a place to come and reconnect with the rhythms of nature, of growing things, of the sources of food and nourishment. Everything seems to slow down the moment you step over the threshold. Naps in the grass become irresistible, and cloud-watching a very fine way to spend an afternoon.

Above: The young orchard in the lower field, where King, Gravenstein, Orange Pippin, and Bramley apples flourish. 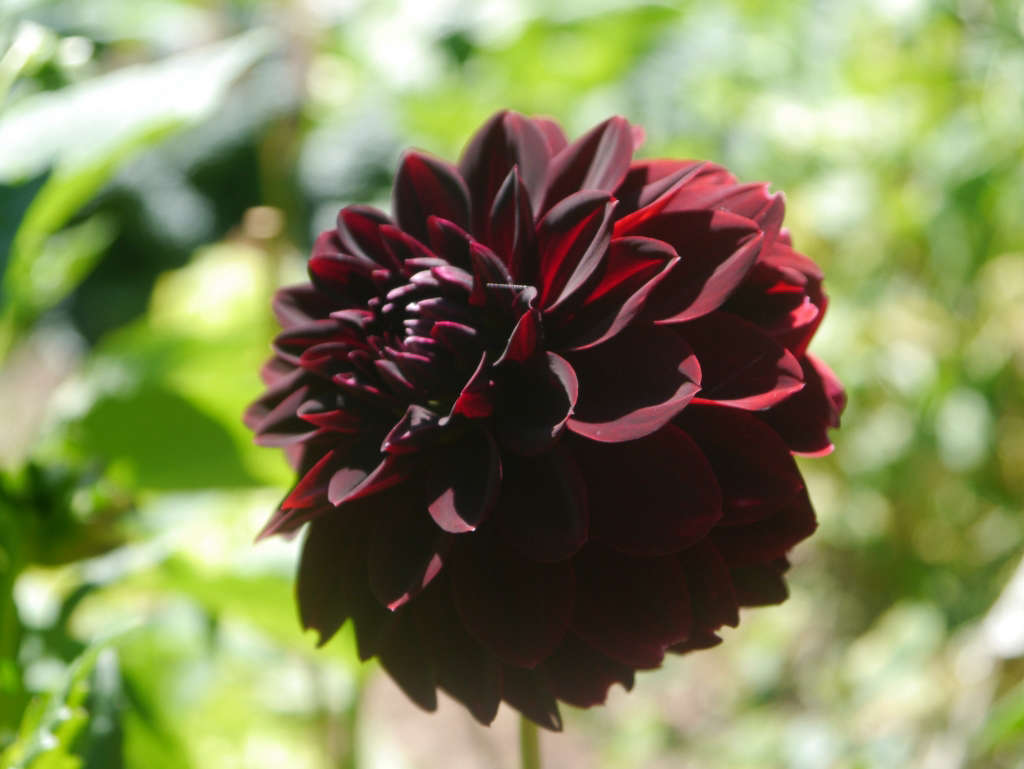 Above: A dark red dahlia soaking up the July sun, one of several different color varieties grown for their beauty and their charisma in bouquets. 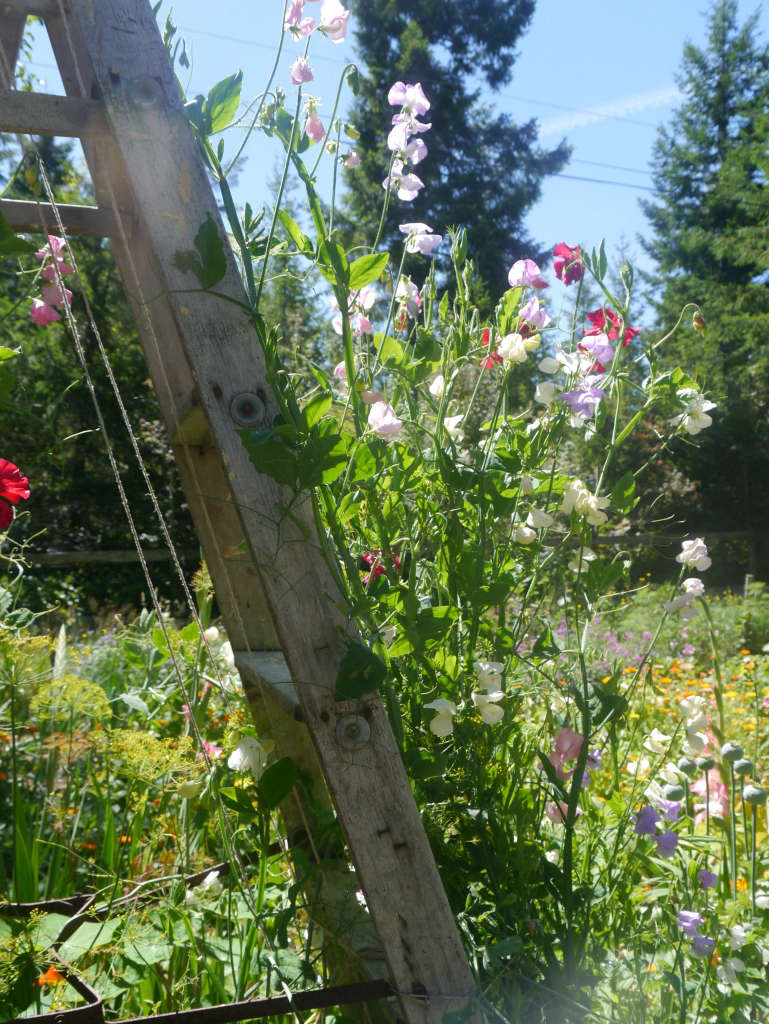 Above: Nao intercepted an old ladder on its way to the dump and turned it into a charming trellis for sweet peas. 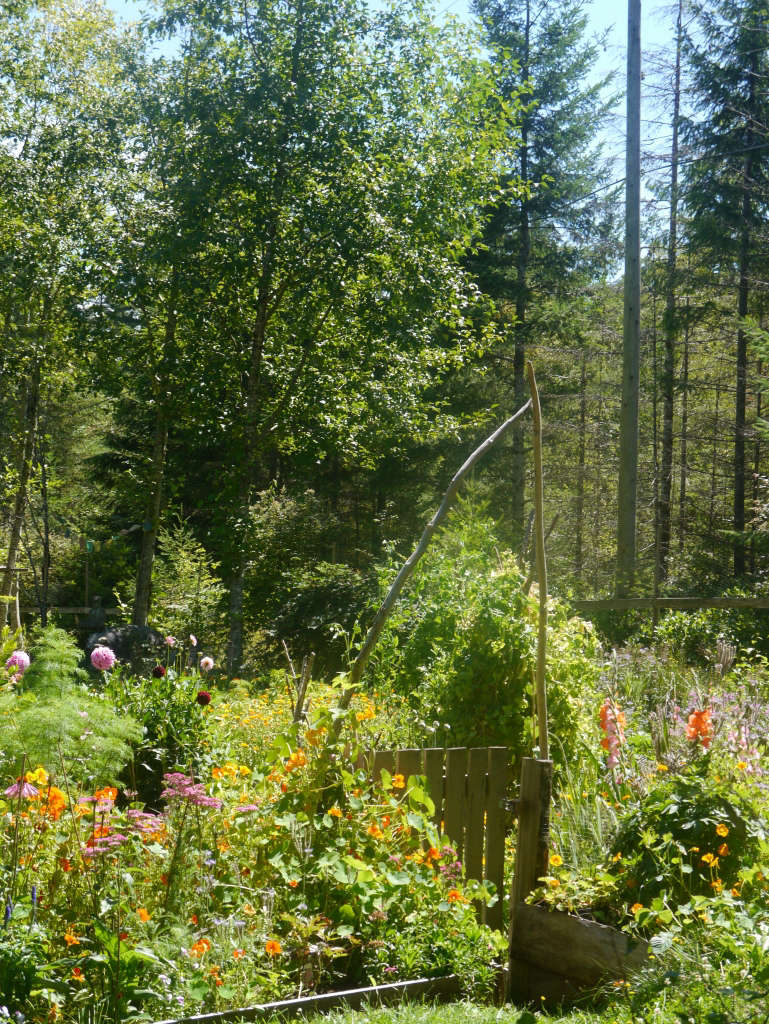 Above: Driftwood pieces foraged from the beaches down along the Comox Bay make perfect fence accents and trellises for morning glory vines, hops, and nasturtiums.

Above: By the end of summer, these driftwood trellises will be heavy with morning glories and nasturtiums. 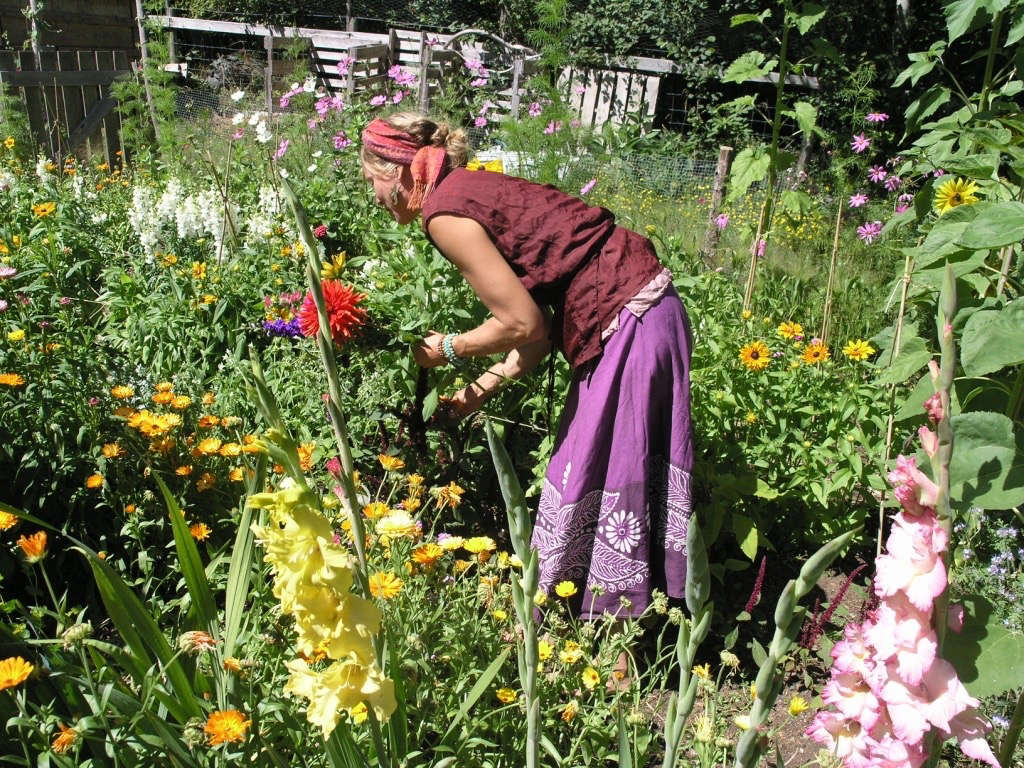 After a week—or even a few days—on Honey Grove, you will come away refreshed, renewed, and full of very good food. The land, and the people who tend it with such care and attention, are a reminder that connecting with the source of things—flowers, vegetables, honey, meat, bread—is always a recipe for hope.

To learn more, or book a stay at the cottage, see Honey Grove.

On the Hot Seat: Heated Outdoor Furniture from Galanter & Jones