High levels of arsenic and lead in the soil, a decrepit factory building, a courtyard roofed over with half-rotted plywood and tarpaper and paved in concrete—we’ve all heard this Brooklyn story at least once. But surprise, there’s a happy ending for one garden on an industrial block in East Williamsburg.

When FABR Studio + Workshop partners Thom Dalmas, Bretaigne Walliser, and Eli Fernald discovered the skeleton of a 700-square-foot courtyard while remodeling a building for clients, they were able to see beyond the grit. They decided to site their company headquarters in a first-floor studio space (see the interiors on Remodelista) and—in a genius move—to install steel factory doors to connect their office to a courtyard garden.

The problem? The plan required them to create a courtyard garden from scratch, which required a leap of faith. “We dug up the whole concrete floor—broken slabs and dirt—and removed layers of plywood and tarpaper, and rebuilt a garden wall,” said Bret. “At that point we tested the soil—and it was shockingly high with lead and heavy metal. It was essentially a brown field site.”

The solution? They remediated the dirt below the concrete with ground-up fish bones and fish meal (to render the heavy metals inert) and carted topsoil one wheelbarrow at a time to create a healthy foundation for plants. “It took a week and smelled like low tide for days, but the plants are absolutely thriving,” said Bret.

The result? Magic. Read on and see if you agree:

In a neighborhood where rusting construction cranes and corrugated sheet metal are far more common sights than butterflies and bees, Fabr Studio created an oasis both for themselves and for the next generation of insects and humans (Bret and Tom are partners in life as well as in work, and have two young children who have named all the fish).

The fish live year-round outdoors. “You can get a little pond warmer with a heater, to create an oxygen hole when it ices over,” said Bret. In the winter when ice on the surface of the pond is thick enough “to ice skate on,” the fish hibernate at the bottom, she said.

“In the beginning we were worried because we planted two apple trees and then worried there were no bees because it was an industrial area,” said Bret. “But there was a bar on the corner which has a flower garden on the roof—and beehives.”

The bees fly from the roof down to the Fabr Studio garden to drink water and then return to their hives. “They pollinated our apple tree and all the flowers and the tomatoes,” said Bret. “There’s a thriving little bee colony although the rest of the neighborhood is like a wasteland.”

“Oh my God, the garden is incredibly therapeutic,” said Bret. “We live about ten minutes away in a loft apartment with our two toddlers. When we were finally able to build this place and have the garden, it was a wonderful opportunity to have space for the kids to come hang out.”

Not shown: plastic inflatable pools, water guns, and the barbecue grill that appear on the weekend. “This garden goes high, it goes low,” said Bret.

“We’ve been trying to have a little bit of a biodynamic scenario,”  said Bret. “We bought lady bugs to deal with the white flies.” 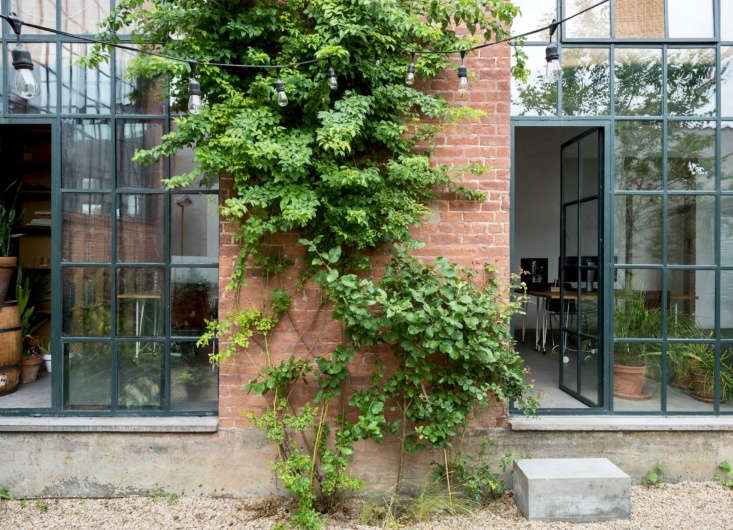 Above: A wild rose (dug up from Tom’s parents’ Cape Cod garden in Wellfleet) covers the brick wall.

If you’re designing a courtyard garden from scratch (or any kind of urban attempt at nature), see our curated Garden Design 101 guides for tips. If lead, arsenic, or other contaminants are a concern, read more:

Succulents Explained: How to Identify and Grow 12 Favorites

Trending on Remodelista: The Cult of the Small Kitchen