My middle daughter is home from New York for a visit. It’s been a week of reminiscing and doing all the things she loves from childhood: baking cookies, hiking up Mt. Tamalpais, getting frozen yogurt and walking around with it downtown at dusk. And of course, waking up at 5:17 am to the sound of her father swearing, perched precariously on a ladder in her room as he bats with a broom handle at a screeching smoke alarm.

“Fire! Fire!” a tinny robotic voice says from somewhere inside the plastic unit.

Will we never learn? I imagine that somewhere in the world is a family that has perfected the art of replacing smoke alarm batteries a full 24 hours before the detectors go crazy in the middle of the night, preventing them from causing mayhem, cursing, and panic. This organized and prepared (and perhaps mythical) family does not have tiny dogs with large ears and a low threshold for high pitched noises, who shake uncontrollably and jump panting into my middle daughter’s bed at the first hint of battery failure.

“Isn’t there an app for this?” she mumbles, rolling over and falling back to sleep.

Good question. Most of the time a smoke alarm seems so unassuming and discreet, just a low-profile disk floating on the ceiling. Until it’s not. Why was it built with a dependency on batteries and a propensity to disrupt slow-wave sleep every few months?

I am not disputing the value of the smoke alarm as an invention; it saves lives. Back in the 1960s, before smoke alarms were routinely installed in homes, about 8,000 people annually died in residential fires. These days there is at least one smoke alarm in more than 96 percent of US homes, and the number of fire-related deaths has decreased to about 2,500 a year.

What I don’t understand is why a smoke alarm is designed to be a nuisance and to run on a nine-volt battery. While the design may make the battery people very happy in the short term, it creates a loathing for batteries in general. When a strident blare wakes me, one of my first thoughts (after “can my husband deal with this?”) is: why do batteries exist?

I also have a fire sprinkler system in my house, installed as city code requires during a recent renovation. The sprinklers, hidden behind more flat ceiling lozenges, are in every room. Can you imagine if they also depended on nine-volt batteries and failed every few months, drenching the house? I would have to sleep in rubber footie pajamas and a shower cap.

Or what if the fire extinguisher in the kitchen depended on batteries–and started spraying foam all over the dinner guests every few months?

The conventional wisdom is that it’s your job to remember to change your smoke alarm batteries; the smoke alarm’s responsibility ends after waking you and throwing you into a full-blown panic with its buzzer. It is suggested that you change the batteries at least once a year, on days when you set the clocks back or forward one hour. But don’t you already have enough to do on those days, what with running around trying to remember how to reset all the electronic clocks in the microwave, the car, and the clock radio?

A man named Duane Pearsall invented the home smoke detector in the 1960s by accident while he was trying to manufacture darkroom equipment. He noticed, while tinkering with photographic instruments, that whenever his assistant lit a cigarette, the sensitive gadgets went haywire. “This was probably one of the best things ever to come from cigarette smoking,” Pearsall’s wife Marjorie said decades later. 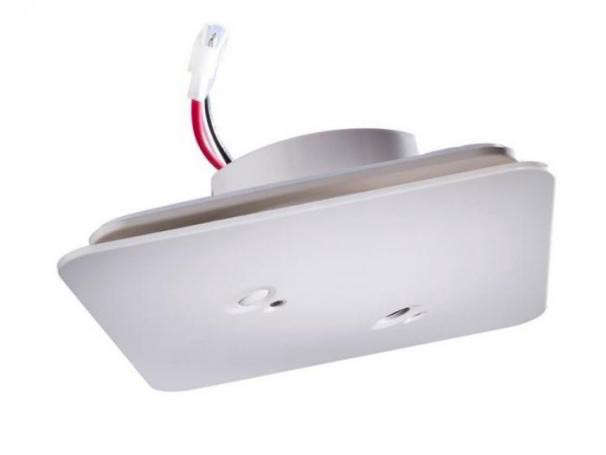 Above: To be fair, there are some hard wired smoke alarms such as the Kidde Low Profile Silhouette Smoke Alarm ($88.88 from Amazon) that comes with a lithium battery sealed inside. Electricity recharges the battery, which is designed to last the lifetime of the unit (about ten years). But then guess what happens? “Once the alarm has reached the end of its life, it will chirp every 30 seconds, letting you know it’s time for a replacement.” Something tells me it will “reach the end of its life” at 5:17 am.

Is your smoke alarm obnoxious too? Or have you taught it to behave? All suggestions welcome!