When we run across a really amazing gardening idea–like desktop composting or a bookshelf garden–we get really excited. We find out everything we can about the product, publish photos to give you ideas for using it, and do research to figure out where you can buy it. Unless it’s not for sale anywhere. Then we feel disappointed: “But this would have been so useful to have!” And we have to shelve the story. But not this time.

An ingenious desktop compost and bookshelf garden system we ran across the other day is too intriguing to ignore even if you can’t buy it ready made in a store. So we asked Hamburg-based Charlotte Dieckmann, a design student at the Hochschule für Bildende Künste, the University of Fine Arts, for tips on how to recreate a working version of her Parasite Farm for your own office. Here’s her advice:

Photographs of the Parasite Farm courtesy of Charlotte Dieckmann and Nils Ferber. 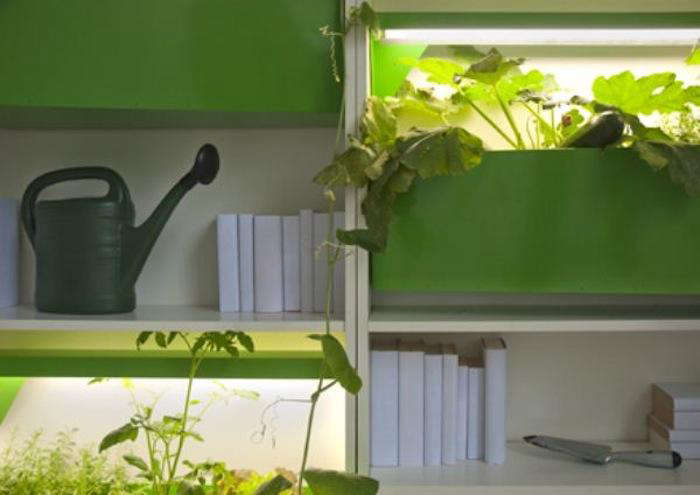 GARDENISTA: First, can you tell us how you got the idea for the desktop compost and bookshelf garden system that you call Parasite Farm?

CHARLOTTE: The Idea began to occur in my kitchen, because I love to cook with fresh ingredients to get delicious and healthy food and as a result, I had a lot of fresh kitchen waste,that i had to throw away. Each time i opened the garbage bin, i felt guilty because those were good nutrients that i just didn”˜t want to eat, and that made me thinking about how i could use them in a more reasonable way.

Then I met Nils Ferber and he already had made some experiments with composting kitchen waste with compost worms. So we decided to try it again togethe and did research on everything concerning worms and composting and how to do this in your apartment. We stumbled on some composting systems, but none of them corresponded to our perception of usability and aesthetics.

GARDENISTA: How did you make it–what materials were used and how did you fabricate it?

CHARLOTTE: We decided to build a prototype that you would be able to use. We made some paper models and 3-D models on the computer to get an idea of how it would look. Then we worked on the component parts ourselves in the workshop of our university and gave some tasks away that we couldn”˜t do ourselves, like laser cutting the aluminum or powder coating. We used aluminum, stainless steel, plastic, acrylic glass, silicone, and wood to build the prototype. But we think that a mass production would need some redesign to make it easier to fabricate, and also changes in the selection of the materials. 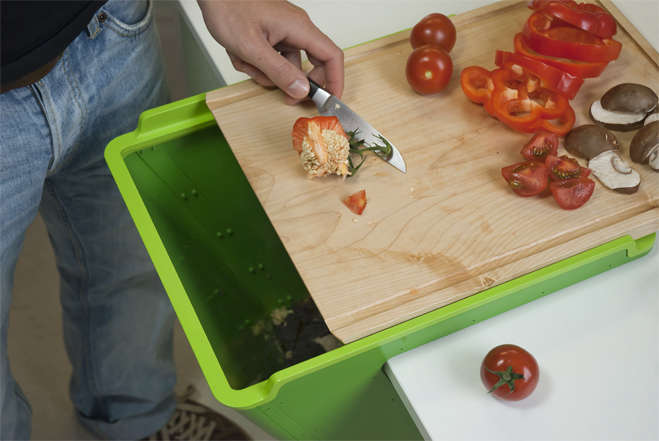 GARDENISTA: How does the composter work? We can see that you put the food waste into the desktop bin. Then what happens?

CHARLOTTE: To aerate the compost sufficiently there are ventilation slots on the bottom side of the notch and on the backside of the container. If there is enough oxygen, you can have almost smell-free compost that smells like forest soil. Add straw from time to time to help regulate the moisture.

The microorganisms and the worms need water to live and to be able to move. Therefore form 60 to 80 percent of the compost should be water–and that will come from the food scraps themselves. No need to add extra. 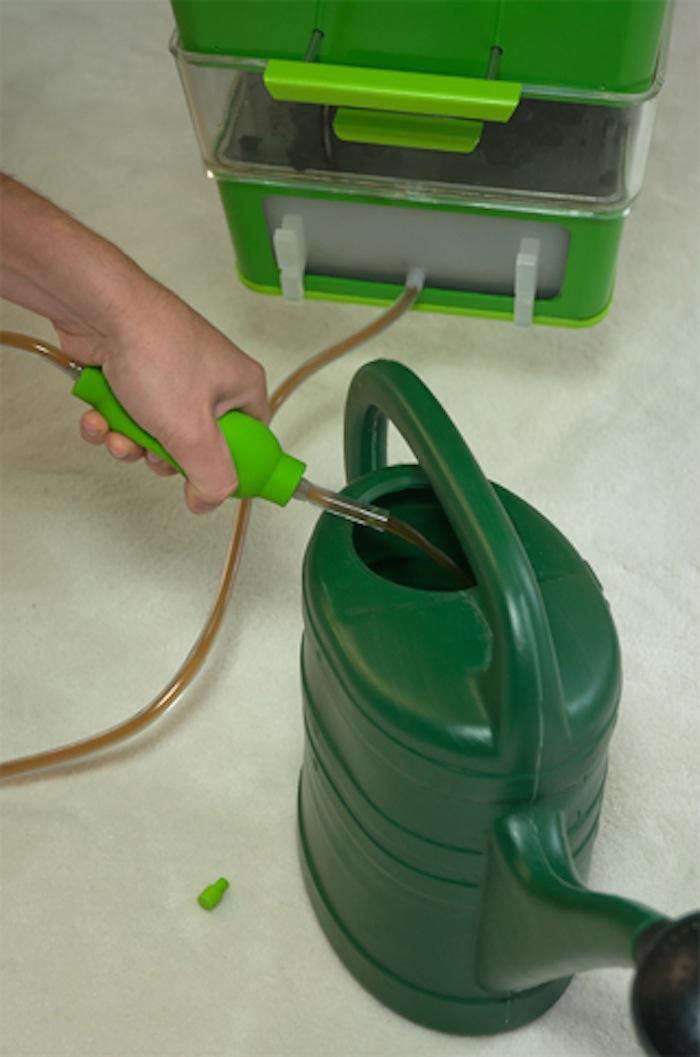 CHARLOTTE: After a few days, the water contained in fresh vegetable or fruit scraps runs through the drawer and is stored in a translucent tank. It can be added into your watering can via a small pump and be used as liquid fertilizer for your plants. A small window on the plant box edge indicates the level of water. 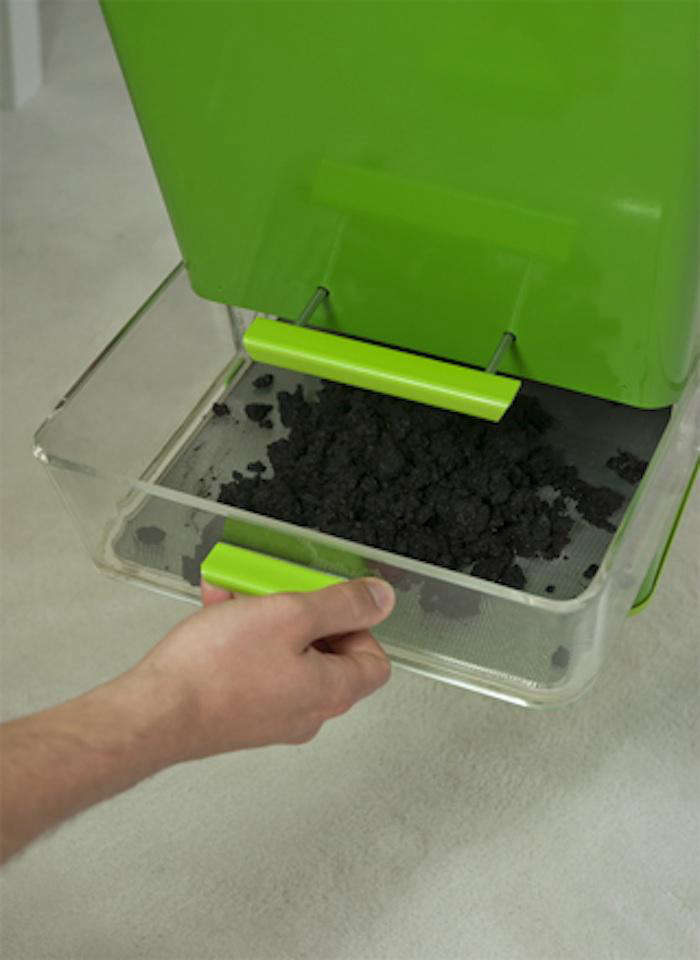 CHARLOTTE: About three months later, the vermicompost is entirely converted. To harvest some humus soil you simply shake the grate a bit and pull out the drawer underneath. The nutrient-rich humus soil can be distributed on the earth in the bookshelf planter and provides the plants with the nutrients that they need to grow. 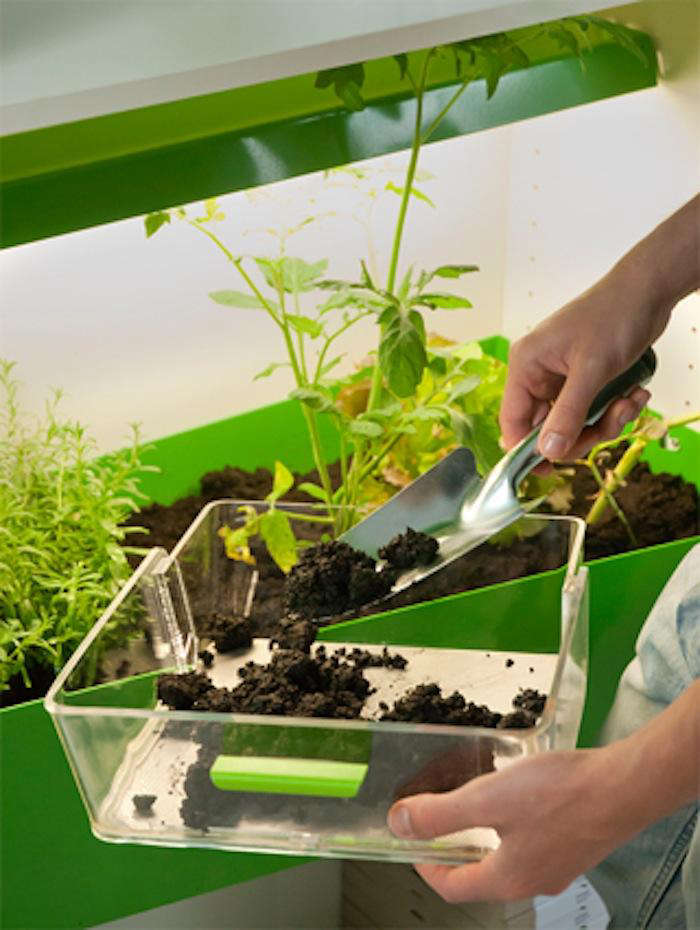 GARDENISTA: For readers who want to make their own version of the parasite farm composter, do you have any advice?

CHARLOTTE: I think the easiest and cheapest way is to use two buckets, that fit into each other. The upper one should have many little holes, so that the liquid can drain into the lower one, which has to be emptied once in a while.

The upper bucket should be filled with a layer of cardboard and then a layer of crumpled newspaper and again four layers of newspaper, so that the worms don”˜t fall through the holes and drown. This last layer should be sprayed with water. Than you put a layer earth in the bin before you put the worms in.

GARDENISTA: Where do you get the worms?

CHARLOTTE: Order on the Internet from a worm farm. (N.B.: Uncle Jim’s Worm Farm has a selection of composting worms.)

The upper bucket should be covered. To get an smell free aerobic rotting some holes in the cover would be good, but you need to cover the holes with a fly screen. That”˜s it!

GARDENISTA: For the bookshelf garden, fill planters with the compost and install a bright, full spectrum plant light such as the T-5 Grow Light Fixture ($99.95 from Gardener’s).