When you consider how popular the carnation was in the days before hybridizers bred out its lovely light scent of cloves to turn it into a stiff-petaled supermarket standby, it is shocking to realize how far a flower’s fortunes can fall.

Photography by Sophia Moreno-Bunge for Gardenista. 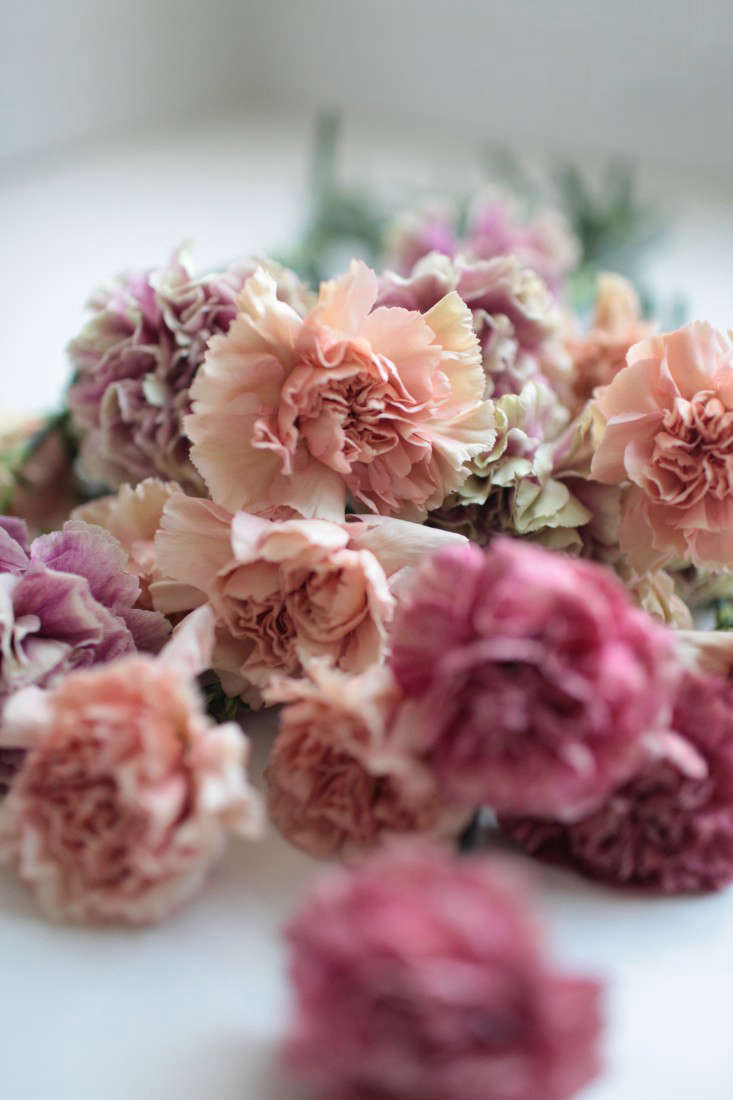 Above: A century ago breeding carnations was a rich man’s hobby, with millionaires competing against each other for prizes at flower shows. In New Jersey horticulturalists were feverishly working to develop a vivid purple variety. In Far Rockaway, New York, a florist managed to grow an actual green variety (as opposed to the pretenders of today that are forced to suck up green food coloring through their stems). “Emerald” had a 3-inch diameter and sellers around the country were desperate to get their hands on it.

Meanwhile, greenhouse operations devoted to the carnation’s propagation dotted the Midwest, and the so-called Carnation King of Cincinnati—a fellow named Richard Witterstaetter—sold a cross between “Lawson” and “Enquirer” that he named “Aristocrat” to a Chicago nurseryman for $40,000.

But carnations were delicate; the floppy-stemmed mop tops hailed from warmer climates and entire crops failed during cold Midwestern winters, ruining nurseries and prompting hybridizers to breed for sturdiness rather than charm. A few decades later most varieties of Dianthus caryophyllus sold in the US are shipped in from South America—and nobody much cares about their history. But we should. 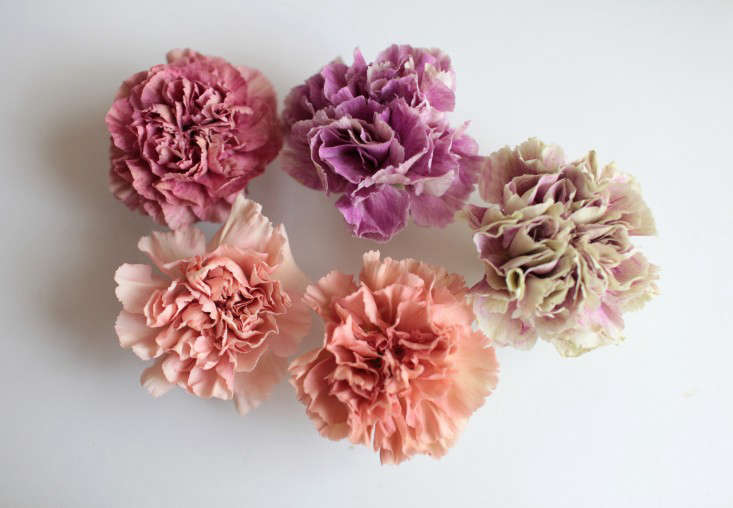 Heirloom varieties of carnations, with their moody colors and crumpled-tissue petals, have a faintly delicious scent and a beguiling delicacy. After I saw what Sophia found at the flower market, I ran out to get some heirloom varieties for my own garden. 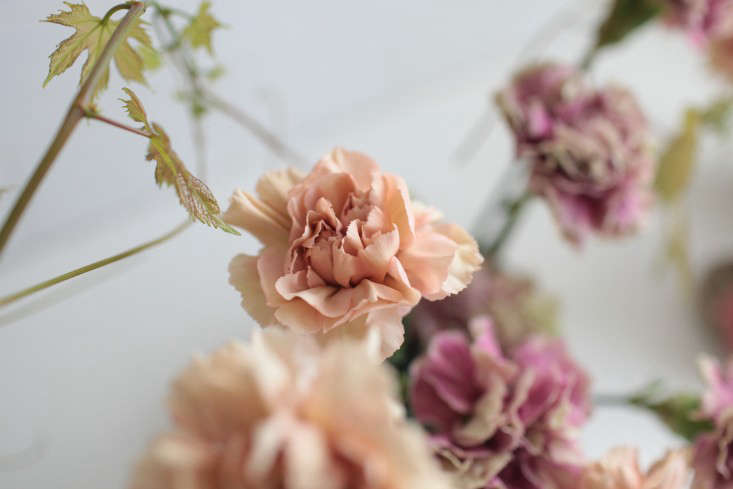 Above: Dianthus caryophyllus likes it hot. The ancestors of today’s supermarket carnations came from the southern Mediterranean region and demanded full sun, well-drained soil, and a balmy climate. These days the world’s biggest grower of carnations is Colombia, on the northern tip of South America. 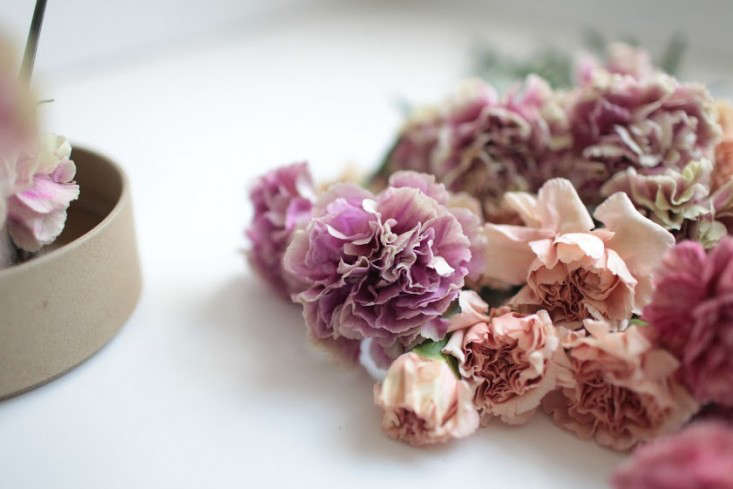 Above: If you want to grow heirloom carnations in your garden, Annie’s Annuals ships plants. Available seasonally, the selection of Dianthus caryophyllus currently includes purple-striped ‘Chomley Farran’ ($12.95 for a 4-inch pot).

“The only remnant available in the US of the type of carnation or dianthus so beloved by plant breeders of the 1700s and 1800s,” notes the catalog. “Sadly, there used to be over 200 of these striped varieties called ‘Bizarres’ now lost to cultivation, some with blooms to four inches across.” 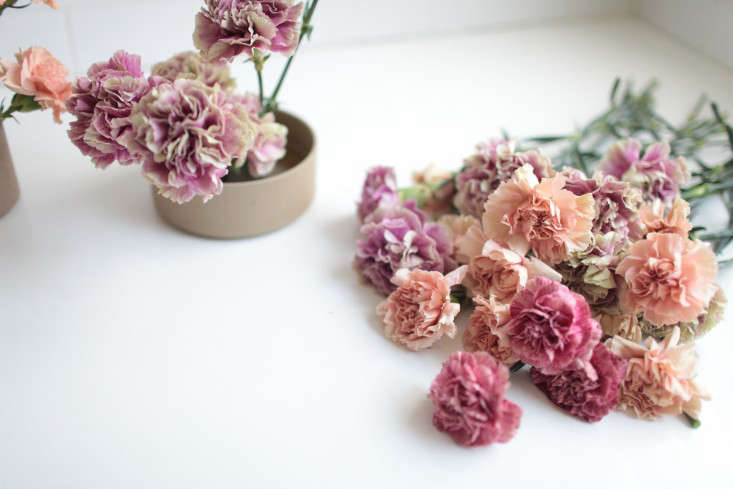 Above: Allow me to quote from the circa-1915 book Commercial Carnation Culture: “We have in the carnation one of the great flowers of the ages, ranking second only to the rose in universal esteem.” 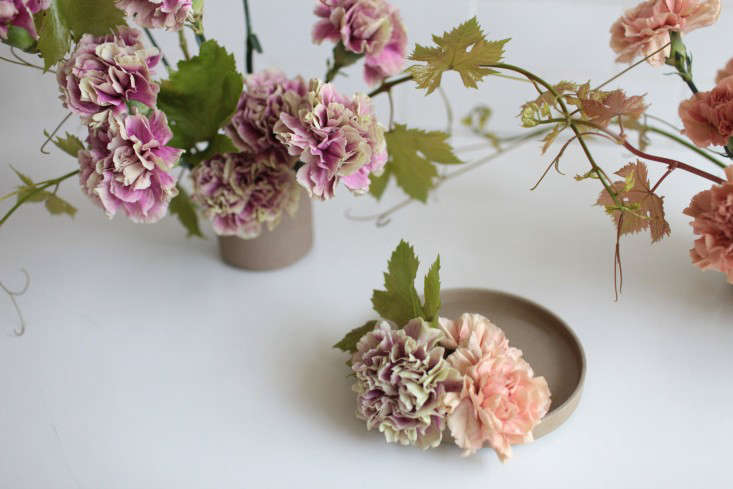 Above: In the UK, nursery Allwoods of Hassock (with the motto “Where plants come first”), grows wonderfully fragile and frilly varieties of greenhouse carnations.

Under glass at Allwoods grow fragrant varieties including white Northland (dating to 1939) and available for £3.50. Edward Allwood (from 1921) is “intense scarlet of the brightest and purest shade” and is £3.50 and delivery to UK customers is free on orders above £45. Oh, to live in England. 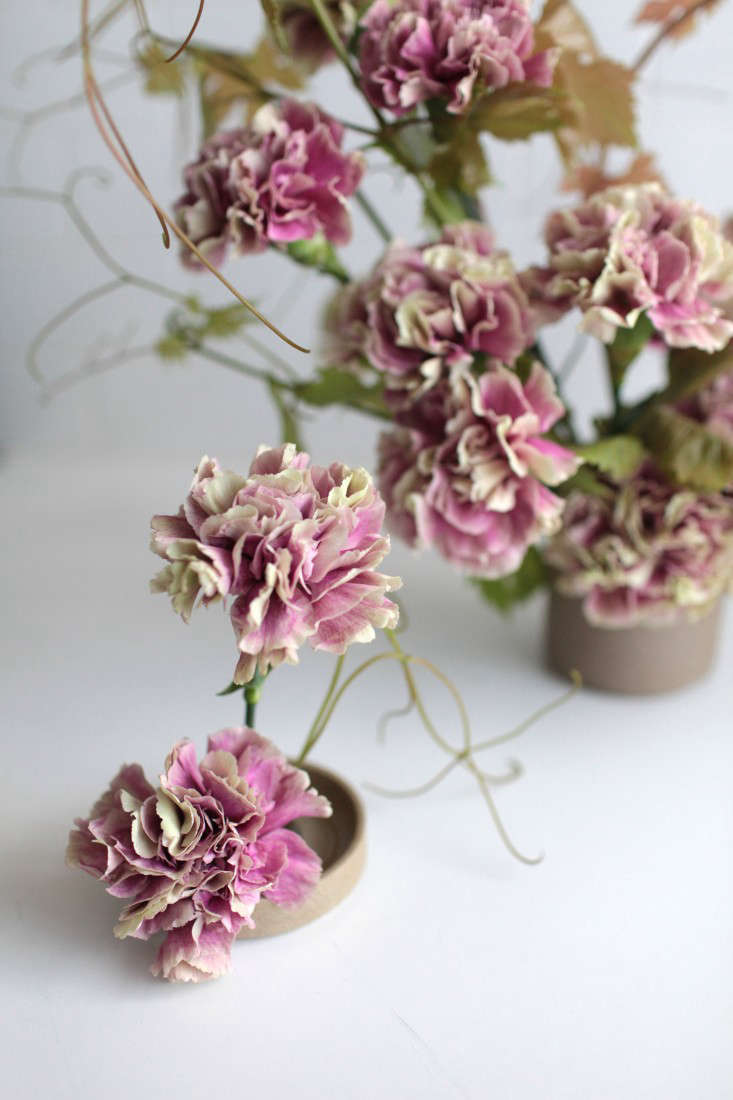 Above: Heirloom varieties often disappear without a trace as trends change and breeders change tack.

Have you ever heard of any of them? 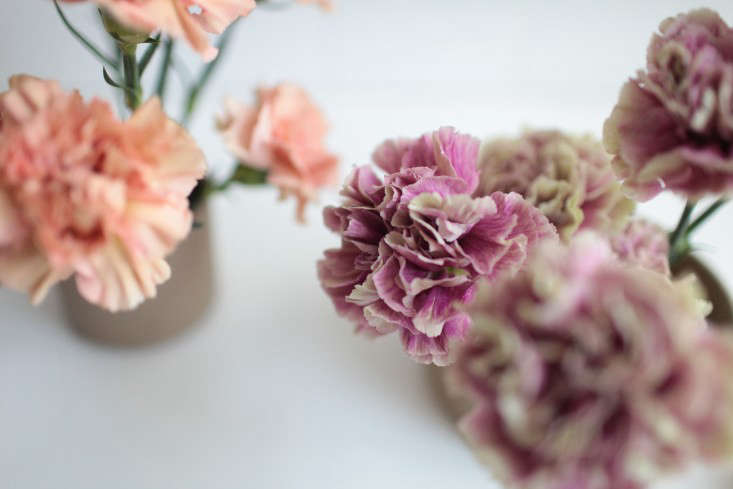 Above: When Sophia found these heirloom varieties at the flower market in Los Angeles, she realized they could stand on their own in a floral arrangement. 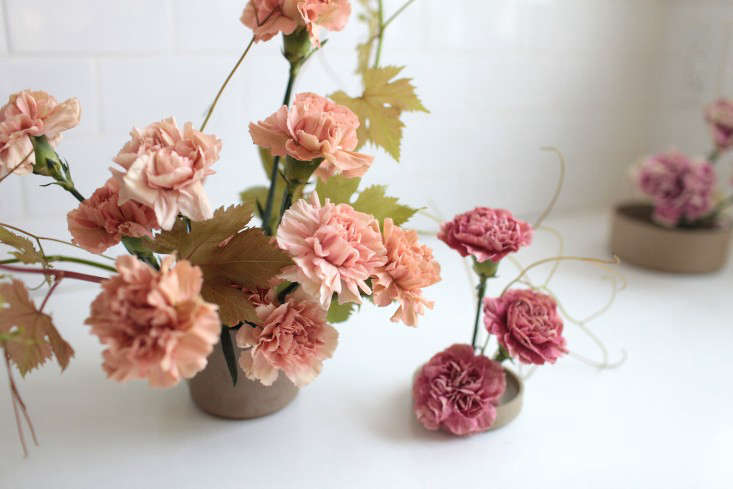 Above: The only embellishment Sophia added was a few wispy vines of grape leaves. 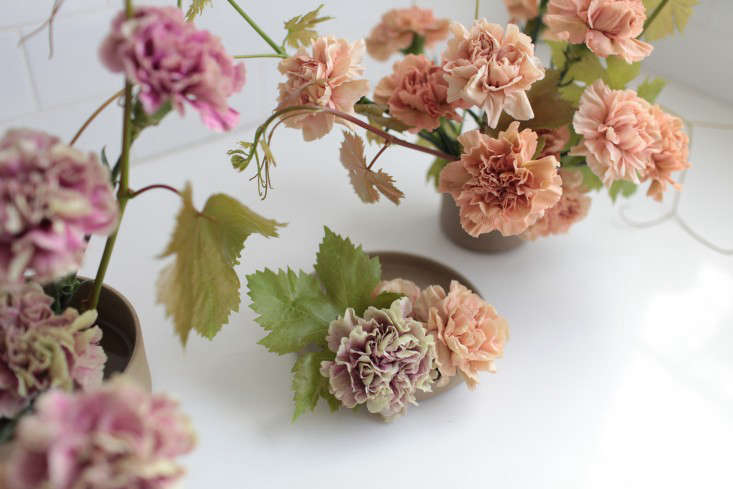 Above: Prone to floppiness, carnations have a lazy-afternoon look to them. 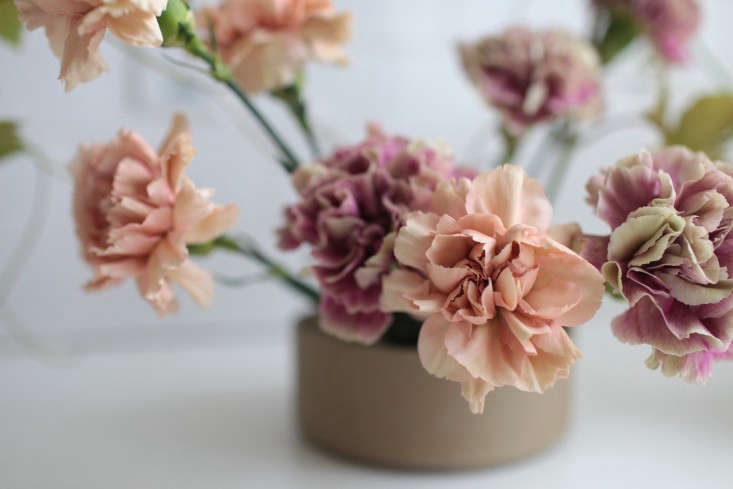 Above: The day he was shot in 1901 President William McKinley was wearing a red carnation in his lapel (he made no secret of the fact that it was his favorite flower) and for years after his assassination there was talk of making the carnation our national flower. 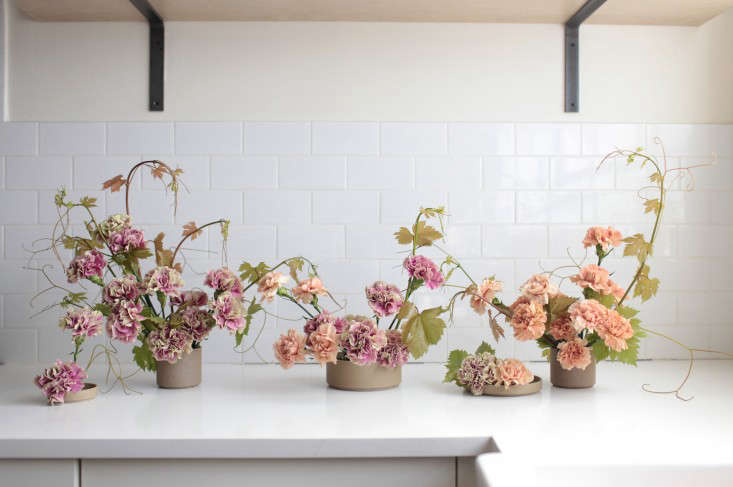 Above: How and why does a flower fall out of fashion? This is our latest installment of Rethinking Flowers, a series about old garden favorites that deserve a second chance.

For more of Sophia’s floral arrangements, see Florist in Residence: My Two Months at Villa Lena in Tuscany.