Urban living is all about making the most of available space, especially outdoor space. Ever wonder what’s up there on New York City’s rooftops?

To create an elegantly simple roof garden in Manhattan’s East Village, Melissa Baker and Jon Handley of Pulltab Design (members of the Remodelista Architect/Designer Directory) maximized the impact of panoramic views while maintaining a sense of privacy, which they achieved with strategically placed walls, canvas screens, and plantings. 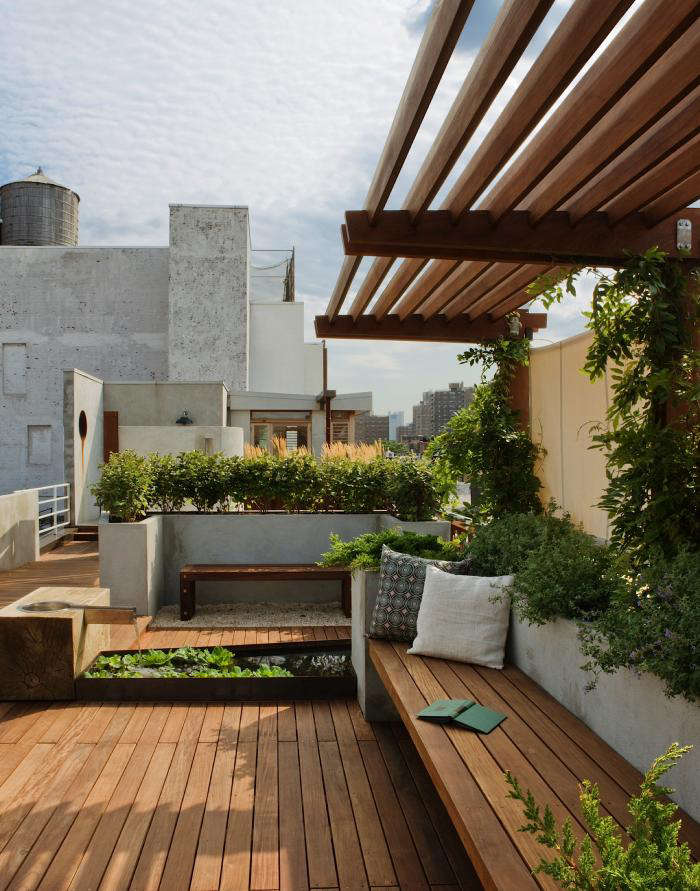 Above: The East Village roof garden offers several seating areas, reprieve from the sun, and even an outdoor shower. 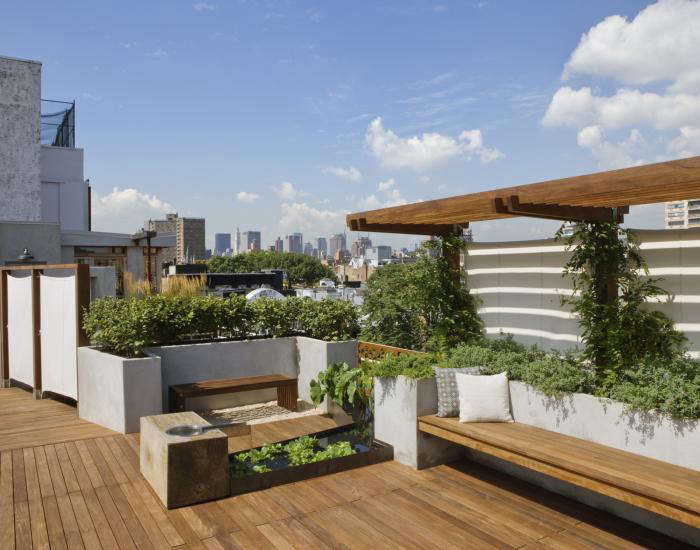 Above: The expansive views take in the East Village and the city skyline. 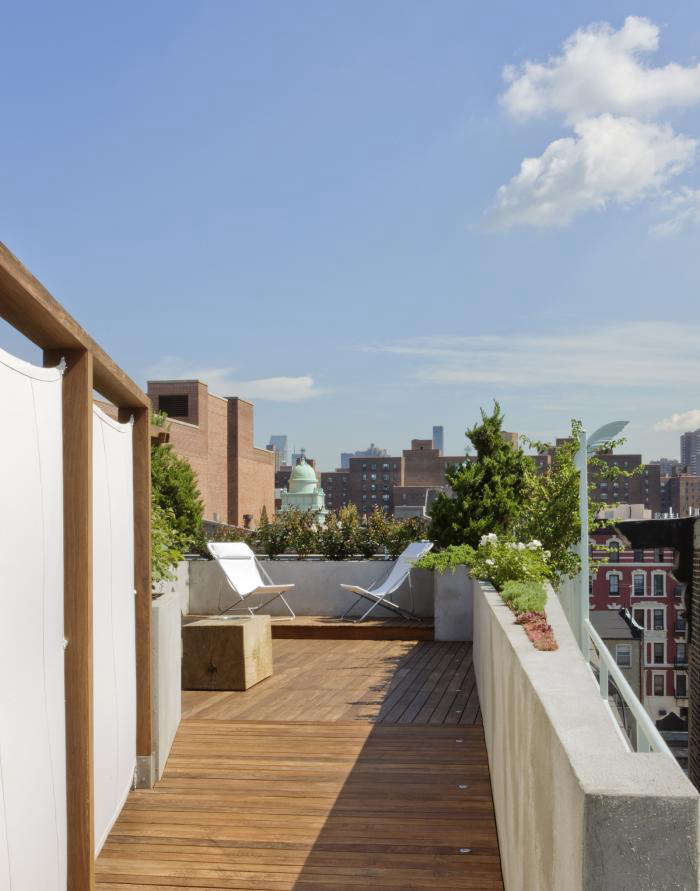 Above: Steel beams were installed across the entire roof to support the new construction. “We worked with a creative structural engineer [Dan Cuoco from Robert Silman Associates] to figure out the required loads and level changes,” says Jon Handley. “Plantings and water features create additional loads that need to be accounted for early on in the design; we brought in the landscape gardener [Roger Miller Gardens] from the start of the project.” 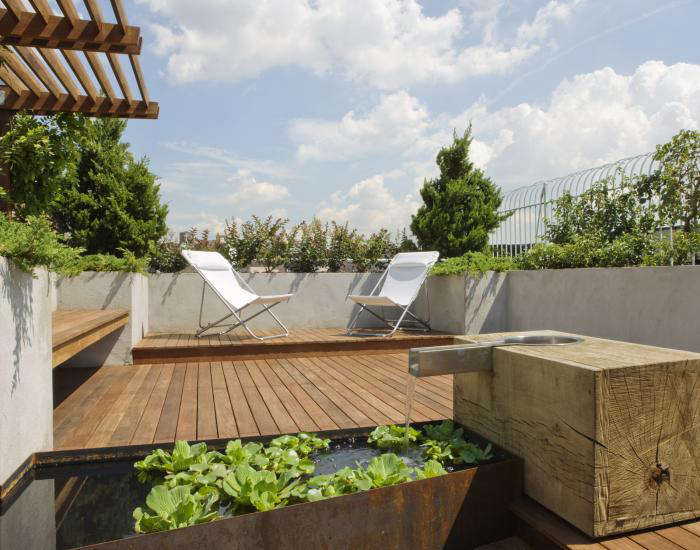 Above: “We designed this project to weather well,” Handley says. Over time, the ipe decking will turn gray, the Corten steel water basin will continue to rust, and the oak block will blacken. 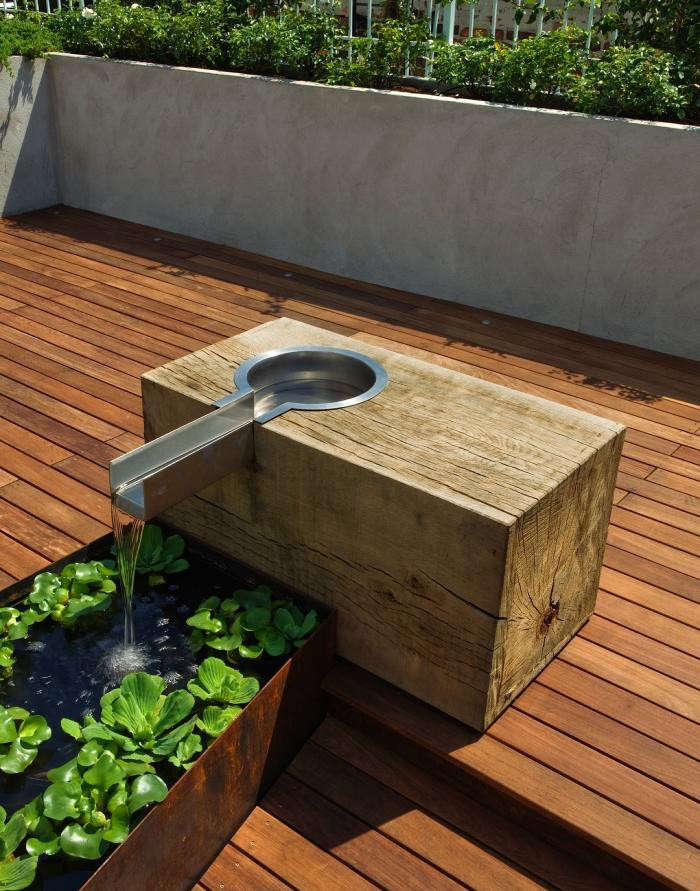 Above: “Every project has a hero,” says Handley, “the place where you spend a little extra to get what you want.” The oak block water feature, nicknamed Chunky, was the hero for this project. Baker and Handley specified in the building contract that furniture builder Stephen Iino would make Chunky. The oak block, which came from a Pennsylvania mill, also serves as a bench. 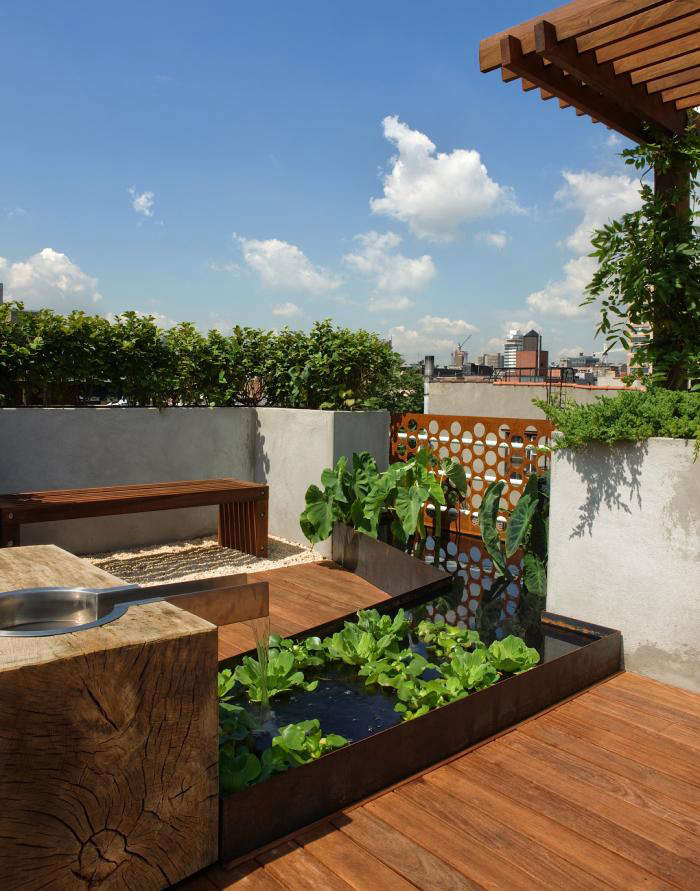 Above: Like the other materials used in the project, the Corten steel screen will continue to weather and rust. 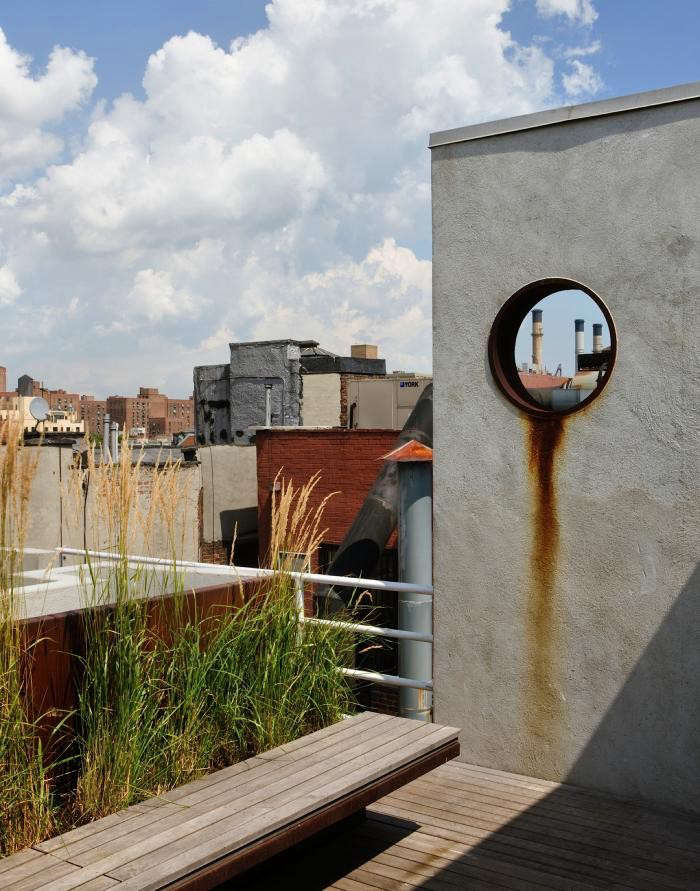 Above: Inspired by the late Italian architect Carlo Scarpa, a master of architectural detailing, Pulltab lined the framed opening of the view to the power station with a 12-inch section of gas line pipe, designed deliberately to rust onto the stucco wall. 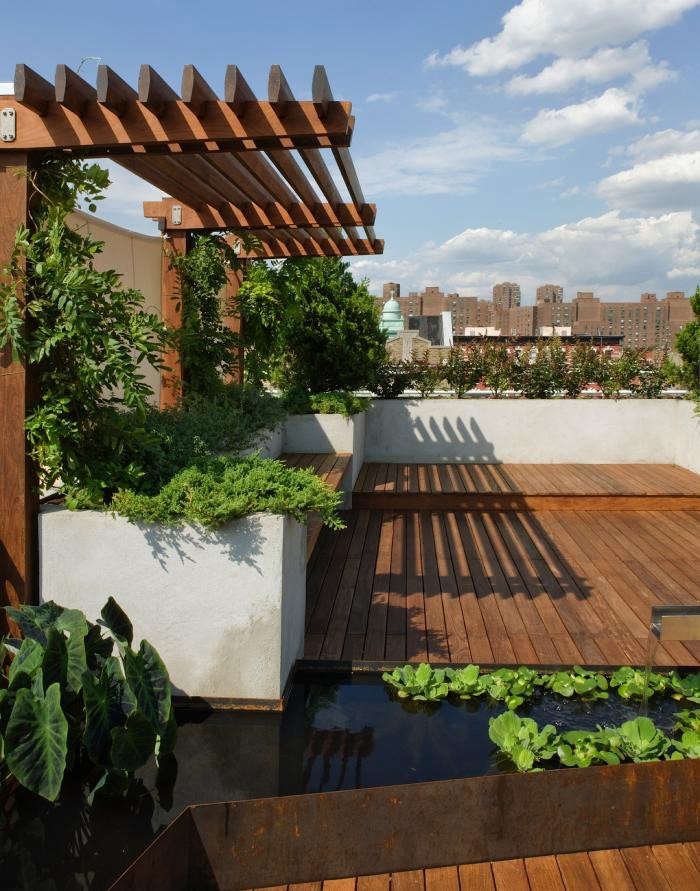 Above: Typically, exceeding the budget is the Number 1 concern on every building project. Baker and Handley believe that a detailed set of construction documents is the key to minimizing changes after the budget has been set. The construction bid for this project included 20 pages of drawings, leaving little room for interpretation or doubt. “We draw everything,” Handley says. “It’s the only way to know your project and avoid surprises.” 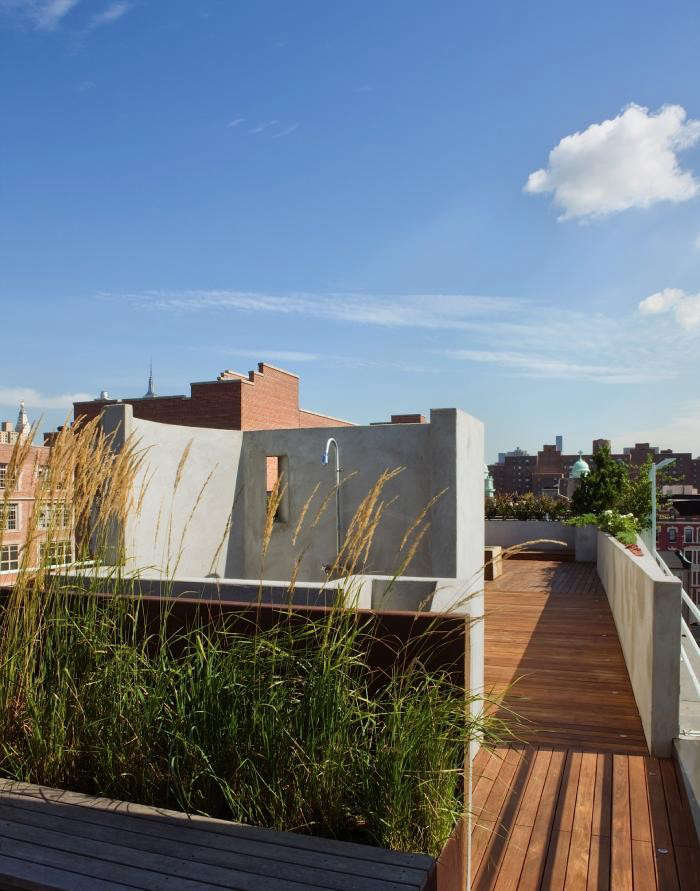 Above: The outdoor shower was designed for privacy, but it has a small rectangular opening that offers a glimpse of the Empire State Building. 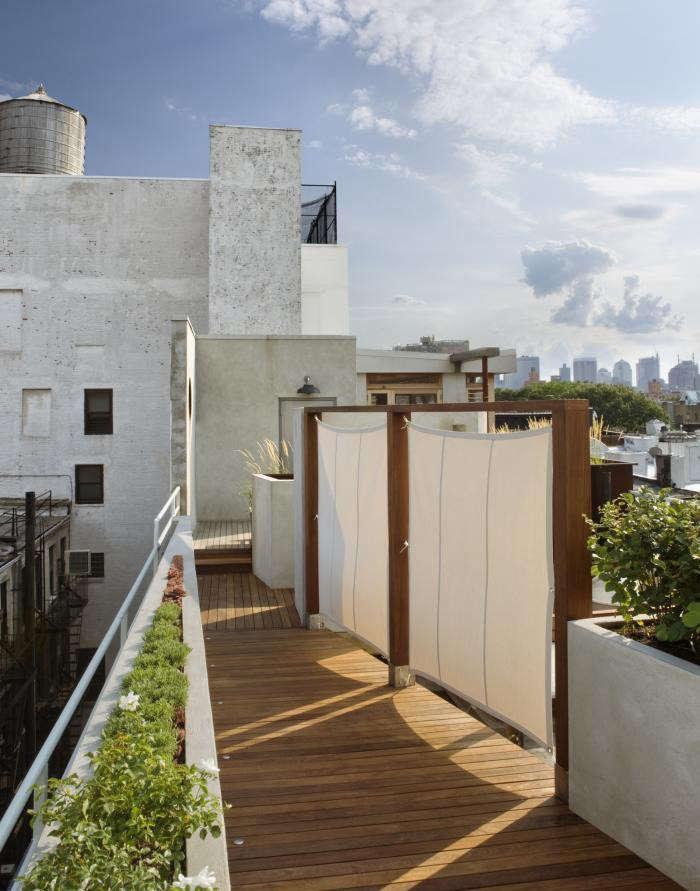 Above: The canvas partitions were made by Mark Washam from Doyle Sailmakers on Long Island, using military-grade surplus canvas.

Table of Contents: The Summer Kitchen