Other people’s windowsill herb gardens are like other people’s children. They always seem better behaved than one’s own. You never see the basil sulking, or the chives whining about how they’d rather be outdoors, playing with their little chive friends.

The secret to achieving similar success–with herbs and, come to think of it, children–is to set limits. There are only five herbs (the ones I cook with most frequently) on my windowsill. 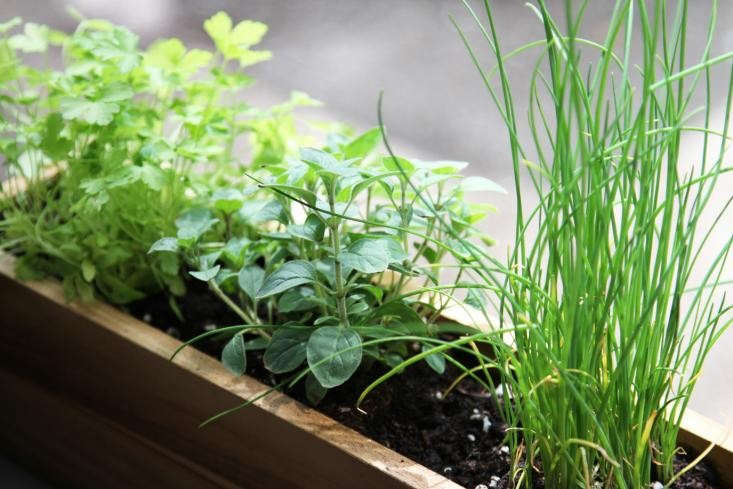 Above: First things first: Find a sunny spot, preferably a southern exposure, and plant in a container (or separate pots, if you’re raising something invasive, like mint) that is a minimum of six inches deep. For a similar look, use a trio of simple white ceramic Vessels in a teak rack ($77 at Horne) or a Set of 3 Herb Pots on a tray, $29.95 from Williams-Sonoma Agrarian.

Above: If you limit yourself to the five herbs you eat most, you’ll have a vested interest in keeping them watered, clipped and fed properly (with an organic fertilizer, once a month). I wouldn’t be without Flat-Leaf Parsley ($4.95 for a packet of organic seeds, at Burpee). It’s a trooper that doesn’t ask for much, just moist soil and six hours a day of sun.

To stay alive, the two things a human needs are air and a reliable supply of Rosemary (several potted varieties are available from Growers Exchange, at $5.95 apiece). I snip a few leaves almost every day–to use on roasted potatoes, inside the cavity of a chicken, or as an ingredient in my secret marinade.

Never trim more than one-third of a plant’s leaves; leave plenty of foliage to encourage new growth. Luckily, oregano spreads quickly. Whether you prefer “Italian” (Origanum majoricum) or “Greek” (Origanum heracleoticum) is a matter of personal taste; both are available for $5.95 per pot from Growers Exchange. Image via Reseptivihko.

Above: Here is the list of ingredients to make my favorite omelet: chives, chives, chives. Oh, and two eggs. And a little butter for the pan (get it sizzling before you dump in the eggs). In the garden, chives are a rampant perennial; you can probably beg a clump off a friend who’s growing them outside. If not, get a packet of 500 organic Chive seeds for $4.95 from Burpee. Image via Earth and Style.

I was shocked to learn, while researching this piece, that some people don’t like the strong taste of cilantro. Really? All I have to say on the subject is: guacamole. That said, Cilantro is a little finicky. I’ve had the most success by (1) starting with a plant, rather than seed, and (2) moving it it to a cooler spot on hot days. It doesn’t care to have the sun beat down on it. A potted Cilantro is $5.95 from Growers Exchange. Image via More Than Today.

This is an update of a post originally published March 6, 2012.