The highly sought after British garden designer Xa Tollemache discovered an affinity for landscape design while overseeing her own gardens at Helmingham Hall in Suffolk (she is married to the 5th Baron Tollemache). Lady Tollemache turned to professional landscape design post-children and post-horses; she took a drafting course and won a gold medal at the Chelsea Flower Show the following year.

Her garden designs–in the UK, the United States, and Europe–exude a certain relaxed approach to formality that we love. So the other day we visited Helmingham Hall to find out how she does it. She generously shared her secrets:

Above: Helmingham Hall was begun in 1490 and took 20 years to build. It is moated on all sides and the drawbridge is pulled up every night. “Helmingham has always been lived in, and that’s important,” says Xa Tollemache; it is a very personal house and garden. Keeping it personal is an important first step in achieving modern formality: “We only plant things that seem to suit the house.”

Above: The gardens were predictably stuffy when the younger Tollemaches arrived in the 1970s. The atmosphere has loosened perversely after Xa (which is short for Alexandra) decided to add even more formal elements. She wanted to put something in for guests to gaze at from the second floor bedrooms, and Lady Salisbury of Hatfield House, celebrated for its Tudor gardens, said: “You have to have a knot garden.” Out went Xa’s idea of a nice rambling herb garden, and in came rigorous structure.

Lady Salisbury suggested that the knot garden display plants which were in cultivation by the 1750s, but that didn’t last long. The knot garden is infilled partly with santolina, trimmed in March so that the little yellow button flowers don’t stand a chance. Xa Tollemache doesn’t like santolina flowers.

Above: Osmunda regalis (also known as Hardy Royal Fern) rubs shoulders with flag iris to soften the edges by the water, of which there is plenty at Helmingham.

Osmunda Regalis from fern specialists Fibrex are £3.75 per pot. For US gardeners, Hardy Royal Fern is $7.99 per plant from Amazon.

Above: Helmingham may have been lived in for 500 years, but levels of comfort have fluctuated. These days the family lives in “a couple of rooms” and there is no central heating–at all–in the house.

The formality near the moated manor quickly gives way to a looseness. Clipped topiary emerges from long grass and daisies, an example of Xa Tollemache’s belief that you should relax the tempo as you move farther away from the house. 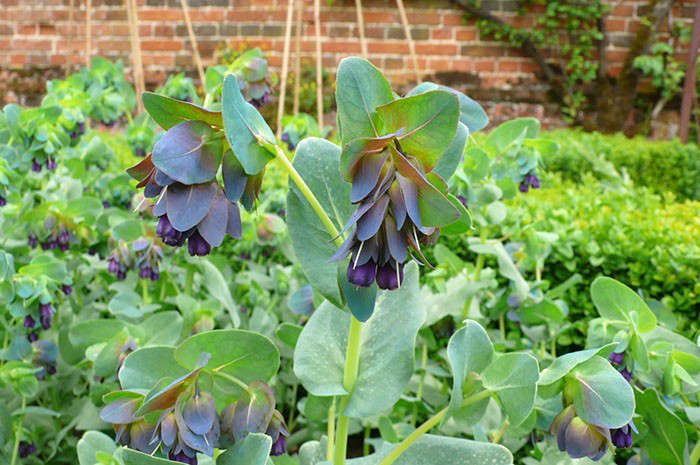 Above: The impressive walled garden. Flowers mix with fruit and vegetables at Helmingham, and in the midst of it a super-annuated head gardener stands in a fruit cage, hoeing with some determination.

I’m sure that Xa Tollemache would have preferred it if Roy the head gardener were doing interesting things with flowers during my visit, but being old school, he was determined to get the weeding done.

Cerinthe Major ‘Purpurescans’ (Shown) is a wonderful cut flower and is available from Sarah Raven; 12 seeds for £1.95. Also known as Blue Honeywort, it’s available to US gardeners fo $4.95 per plant from Annie’s Annuals. 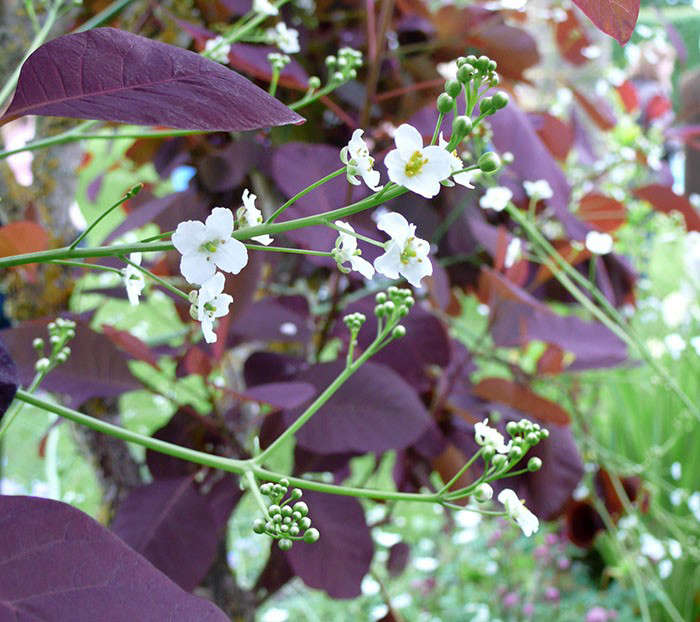 Above: Crambe and cotinus. The gardens at Helmingham are full of unexpected plant combinations. The unusual mixes with the ordinary to very exuberant effect because, as Xa Tollemache points out, it’s more fun to mix high and low.

Above: Salvia nemorosa “Caradonna” with silene fimbriata. Xa describes her style as “no-style,” but if really pushed she’d settle for “classic-contemporary.” The Salvia Nemorosa “Caradonna” shown here is £4.99 per 9cm pot, from Crocus. Also known as Caradonna Blue Sage, it is available to US gardeners for $8.99 per plant from High Country Gardens.

Above: Lady Tollemache loves scale and proportion; creating right-sized borders for the walls and adding generous paths. Among the lessons of Helmingham: learn from your surroundings and don’t rush a makeover, if at all possible.

Above: A south-facing wall on the other side of the kitchen garden faces the moat and benefits from a restricted selection of plants. Just: peonies, roses, iris, thalictrum, and self-seeded valerian and blue nigella. Pink, blue and cream. The idea, says Xa Tollemache, is to be flamboyant, within set parameters.

Free-Range Chicken Gardens: How to Create a Beautiful, Chicken-Friendly Yard