It’s impossible to refer to Catherine Horwood’s potager as a kitchen garden, tucked away as it is, at the very end of her half-acre UK garden—it is as far away from the kitchen of her 16th-century Suffolk town house as you can get. But it’s still a productive space, where she grows flowers for cutting in symmetrically arranged raised timber beds as well as vegetables and soft fruits. On a late summer day we took a tour. 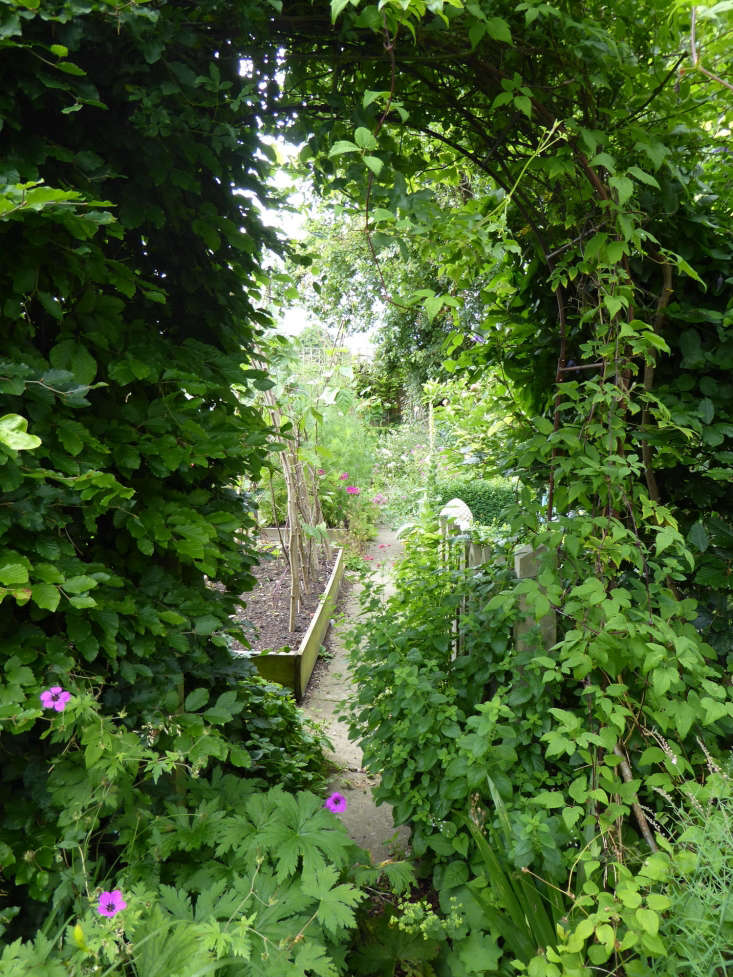 Above: One entrance into the cutting garden is almost entirely concealed by the mature beech hedge and the lush growth of the spring garden. 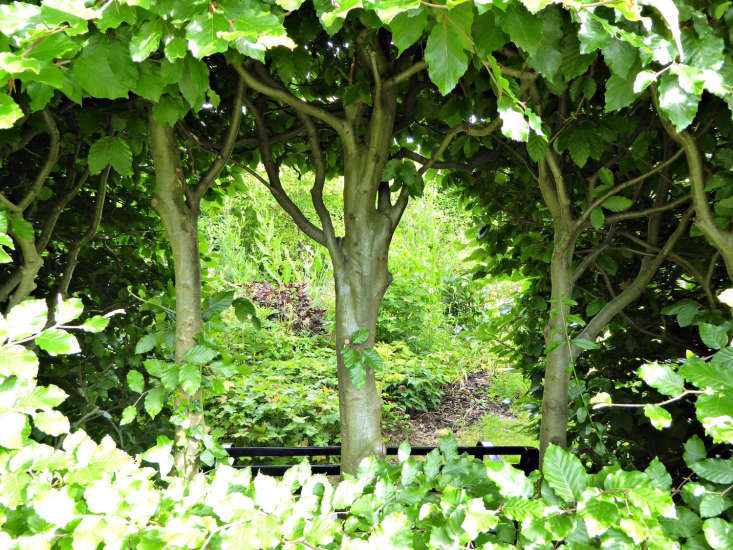 Above: Last year Catherine cut a window into the hedge to provide views into the shady garden next door: “I did root around a bit before doing it but you just have to take your courage in one hand and your secateurs in the other—I was really lucky that I had the straight trunk in the center.” 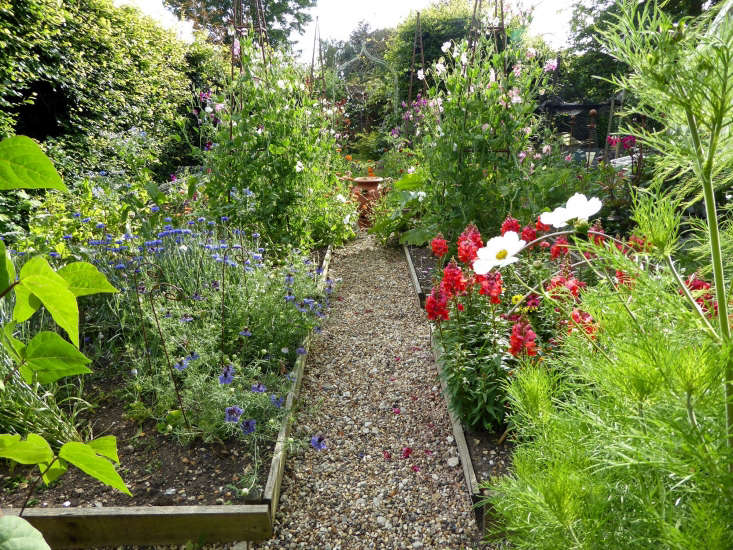 Above: Sweet peas clamber up towering rusted obelisks while a central wire arch continues the symmetry. 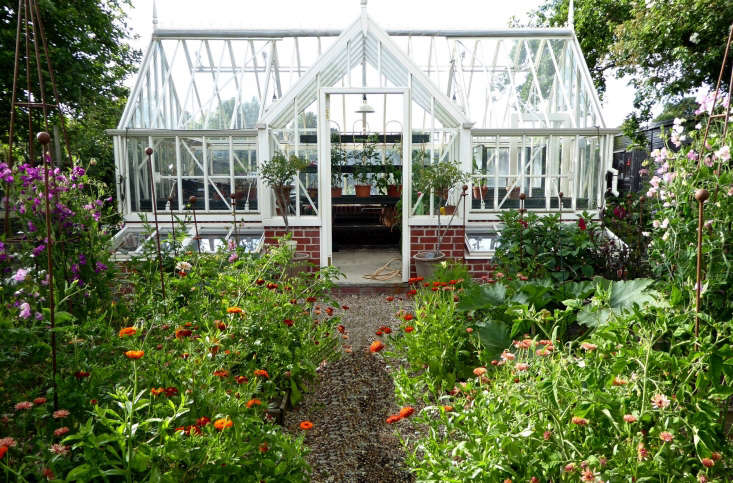 Above: When Catherine moved here, she invested in a serious greenhouse from Alitex together with cold frames, a misting zone for nurturing cuttings and seedlings, as well as plenty of space for growing tomatoes in summer and overwintering tender plants. 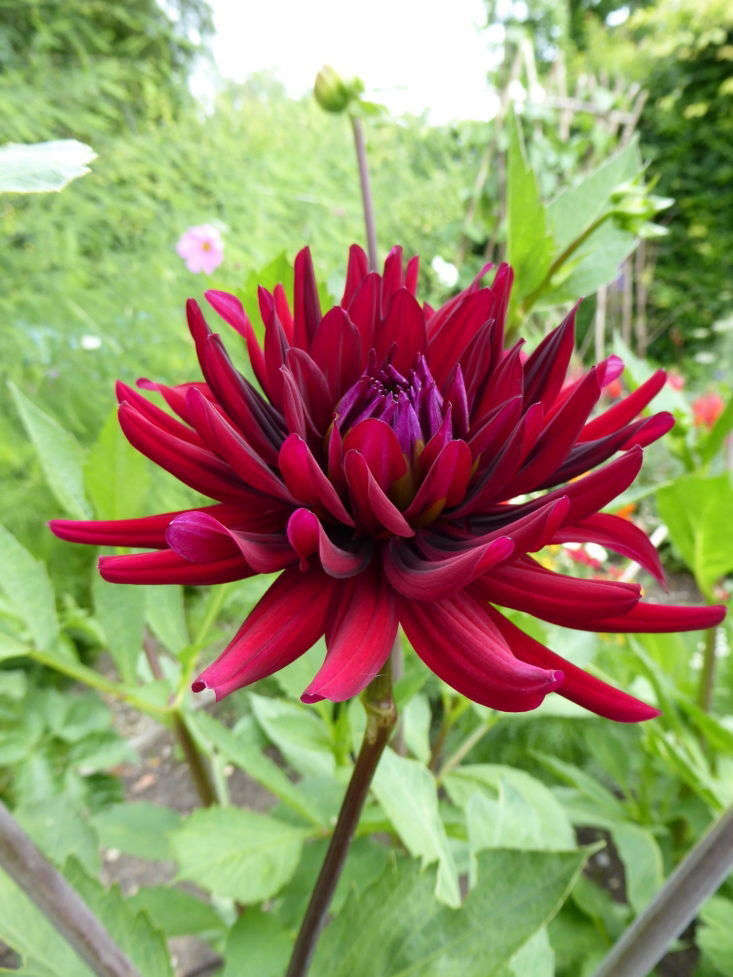 Above: Dahlias are a major passion and much space is given over to growing them. Here they are planted in deep plastic pots – a trick picked up at Angelsey Abbey – so that they can be lifted out easily before winter sets in. Although in this protected spot they could well be safe left in the ground with a thick mulch on top. 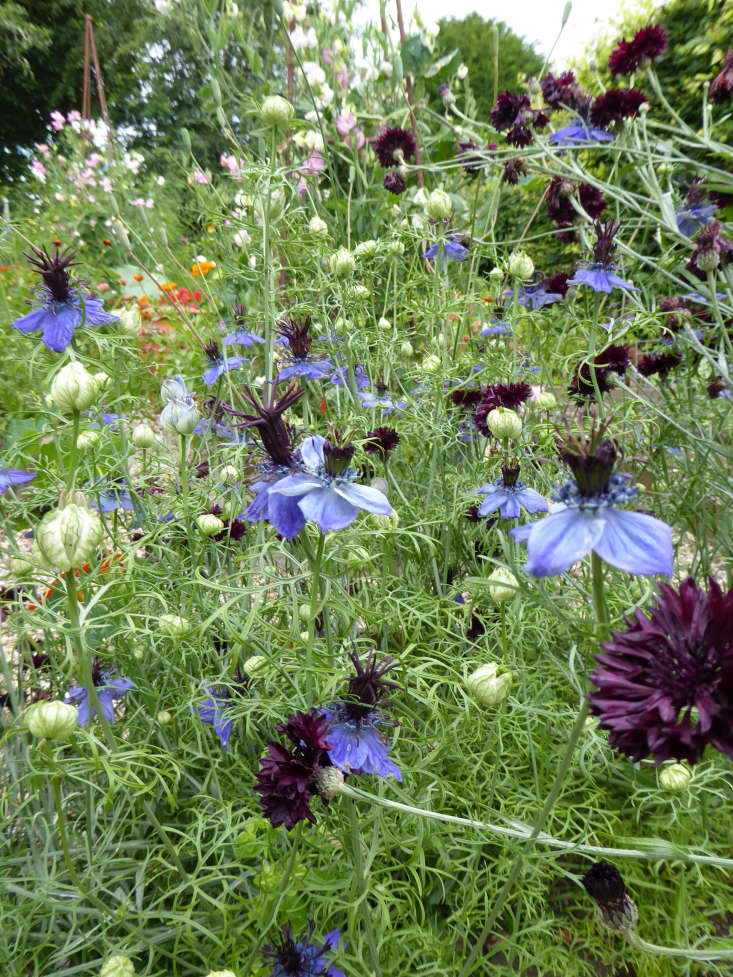 Above: Annuals such as Centaurea cyanus ‘Black Ball’ with Nigella damascene, pictured, are also grown in abundance as well as sweet peas, cosmos, snap dragons, and zinnias. 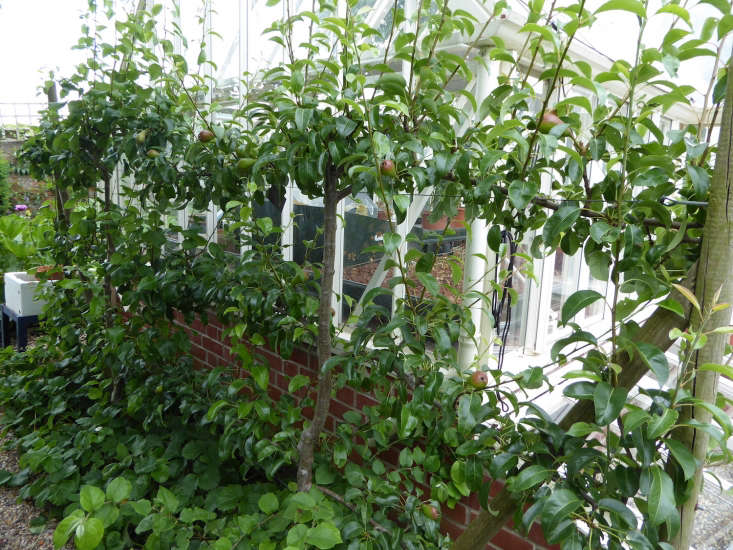 Above: To save space pears are grown as cordons, edging a path against the warmth of the greenhouse wall. 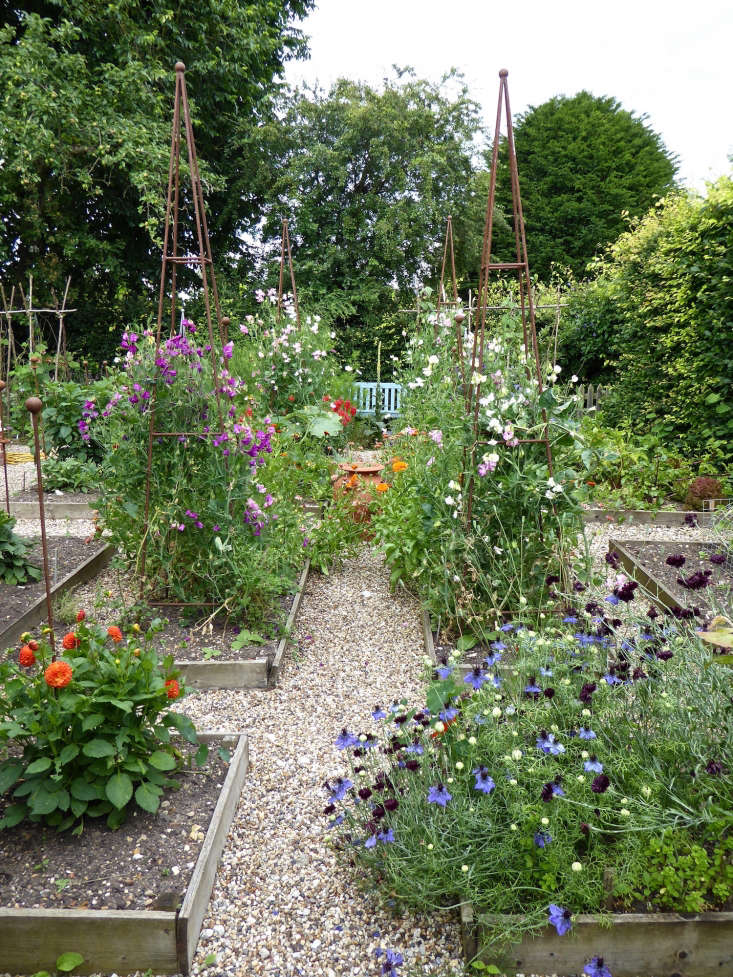 Above: As it borders open farmland at the rear, this is a windy spot but it’s protected on one side by a tall beech hedge (which was one of the features Catherine inherited when she bought the house). 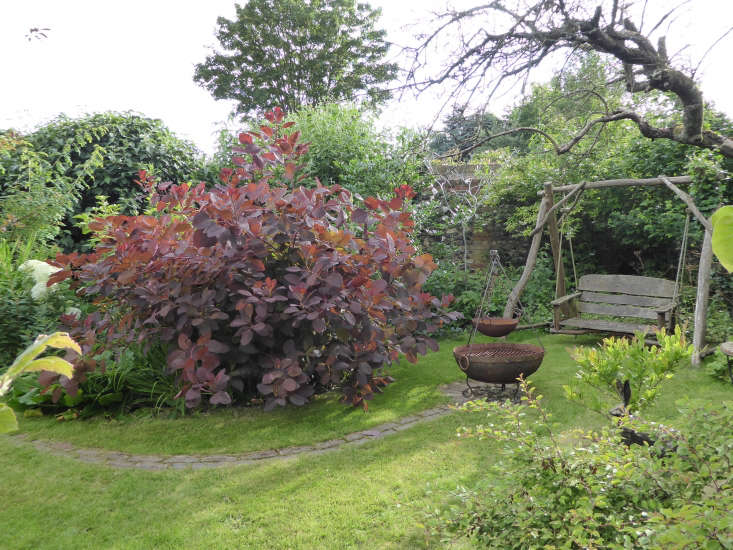 Above: A Kadai fire bowl and a swing seat beneath an old apple tree provide a place to sit and cook on summer evenings. The Cotinus coggyria ‘Grace’ is lit up by the evening light. Note the skinny paths, which are just two bricks wide, to prevent the grass being worn. 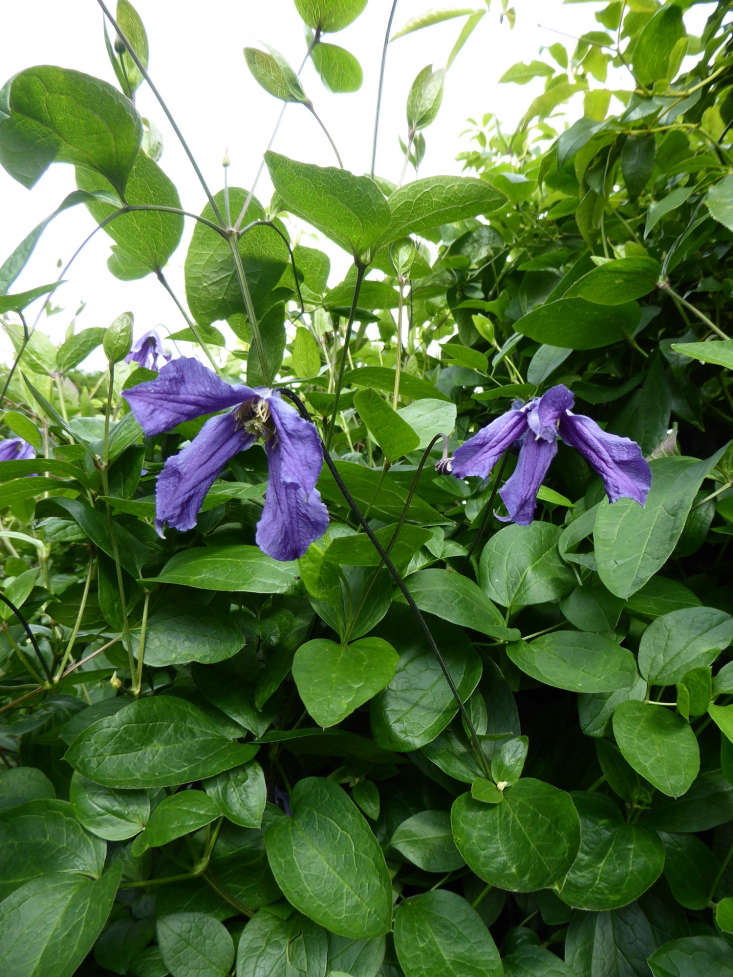 Above: There are more than  40 cultivars of clematis here, including this Vitacella pictured, and they grow through hedges, up walls, through roses and trees as well as, in the case of Clematis Rooguchi, close to the ground around other low-growing perennials. 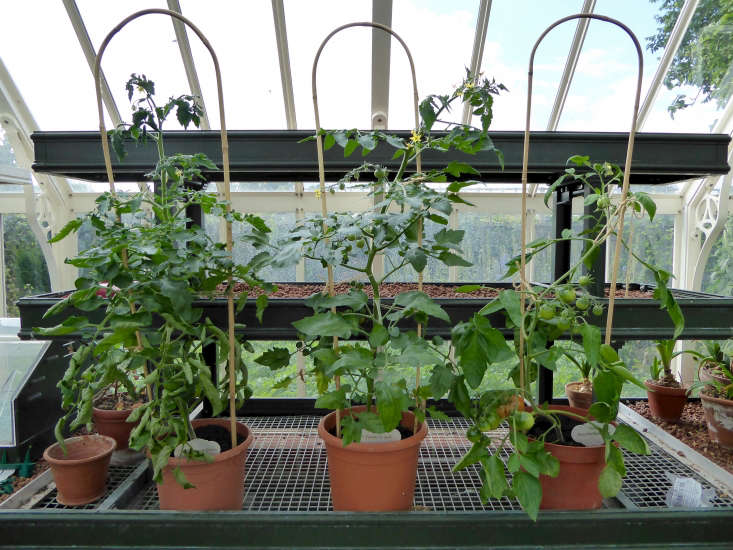 Above: Rather than growing everything, Catherine’s philosophy is to grow vegetables that are either expensive to buy, hard to find, or just much better fresh from the garden: runner beans, French beans, pink fir apple potatoes, courgettes, and tomatoes are all favorites. Soft fruits are grown in a fruit cage; the chickens are moved into the cage in winter so they can fertilize the soil. 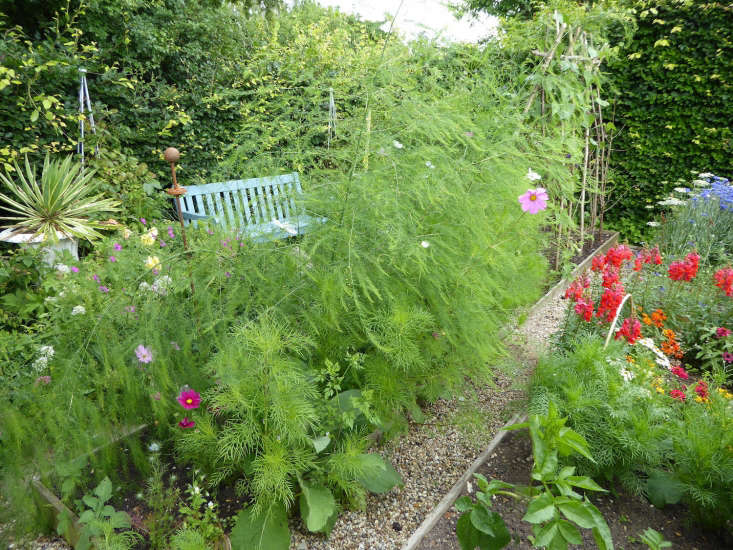 Above: A mini asparagus bed is interplanted with cosmos, a tip from Sarah Raven. The foliage of both plants blends together and the flowers add some interest to the asparagus foliage over the summer months before it dies back.

For more of our favorite edible gardens, see:

Rethinking Double Flowers: Back in Love with ‘Flower Show’ Plants