What did Indian gardens look like before the invaders arrived? The Mughals imposed their 16th century Persian constraints–they were all for walls and the fussy geometry of symmetry–and then came the British, to foist their water-guzzling lawns on a climate ill-prepared to keep grass green. But before all that?

While those early gardens are mostly lost to history, they would have been refuges: designed for fragrance, cooling breezes, and privacy. “In a hot climate, people mostly didn’t stir until the evenings, and their gardens would draw them out,” says garden historian Eugenia Herbert, author of Flora’s Empire: British Gardens in India ($45 from University of Pennsylvania Press).

The gardens we think of today as being quintessentially Indian are those with Persian roots: with raised walkways, and intersecting water channels and quadrants (microcosm gardens, in effect) and flowers and fruit trees and high walls.

Wondering how to incorporate such 16th century ideas into a modern garden design? Here are 10 must-have features:

Canals and reflecting pools remain typical features of Indian gardens, where water is perhaps the greatest luxury of all. “Most of the year is very hot and very dry, and you crave water,” says Herbert.

As the baby Buddha took his first steps, lotus flowers bloomed beneath his feet. “Lotus is the quintessential Indian plant; it grows in ponds, often muddy ponds,” says Herbert.

Will lotus grow in your pond? The plant, hardy in zones 4-10, needs fresh water. “It will not tolerate any level of salt,” warns Pond Plants, which sells ten varieties (available seasonally, now through June).

“They are tremendously important in gardens for obvious reasons: for the cooling effect in a hot climate,” says Herbert. “If you strolled in a garden in the evening, there would be a wonderful sound of water from the fountains and highly scented shrubs, and moonlight on the flowers. It’s a magical effect.”

Want to add a fountain to your garden? See some of our favorite backyard fountains in In Praise of the Water Fountain.

Most of the year is hot and dry in India. To make a garden hospitable, “Brahmins choose shade to fight the heat,” says Herbert. 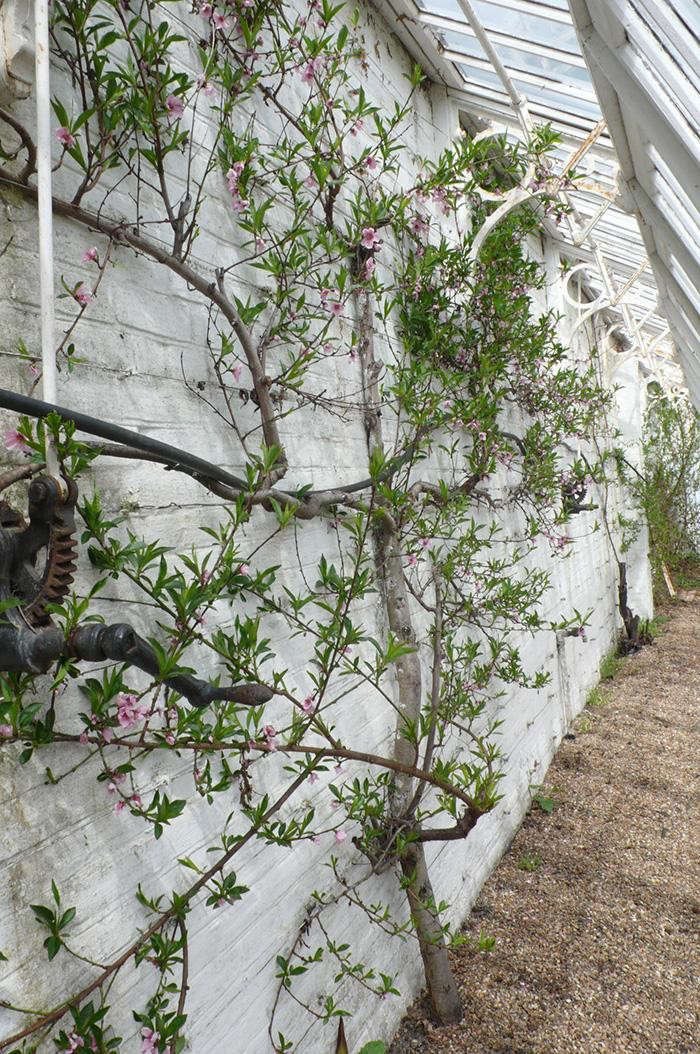 Above: Fruit trees espaliered in a walled garden. Photograph by Kendra Wilson.

“The tradition goes back to very, very distant times in Persia. The Mughal gardens were always walled,” says Herbert. “There were portions of the garden that were only for women, and the rule of thumb was that the walls had to be high enough so that nobody sitting on an elephant could see over.”

Quarried in India, sandstone is a ubiquitous hardscaping material. It’s available in all sort of shades–including tan, red, pink, white, and black.

Above: Fragrant jasmine vines in the garden. Photograph by Michelle Slatalla.

“In antiquity, there weren’t that many flowers–many that we associate with India, like marigolds, were imports–and there was a tremendous importance of scented shrubs. Also jasmine. It would bloom at night, and the smell heavenly in moonlight,” says Herbert. “That’s where the British got the idea of a white garden.”

Drape a flower garland anywhere: in a door, over an entryway, on a table. “Flowers are woven profoundly into all aspects of Indian culture,” says Herbert. “In India, they’ll cover anything sacred in a garland. It really is striking to see, when you go to a flower market, that it’s just the flower heads there, and they’re being strung.”

“The Mughal gardens were meant to support themselves–they planted trees that produced fruit for market,” says Herbert. “A grove of orange blossoms once surrounded the Taj Mahal, and it must have smelled fantastic.”

$45.00 USD from University of Pennsylvania Press

Trending on Remodelista: Five Inexpensive Ways to Prep for Fall

7 Surprising Facts About Raising Chickens Not Found in Books