Austin-based landscape architect Tait Moring grew up in Texas, about a mile from where he lives now. “My dad grew up on a farm, my mom on a ranch, and they were both really into nature,” he remembers. “From them I got a step up on learning about native plants and birds.”

And two decades ago after Moring bought the 22-acre property where he lives and works, he began to design a garden to celebrate the region’s natural beauty.  “To me, every part of the US is unique, and the nice thing about traveling is you go to Texas and it should look like Texas instead of trying to force it to look like another place,” he says. “It’s important to embrace the local stuff.”

One of his goals is to plant at least one of every native plant unique to the region. “There so many great ones,” he says. “I’m on my way. I need to make a master list.”

Photography by Dennis Burnett courtesy of Tait Moring & Associates, except where noted. 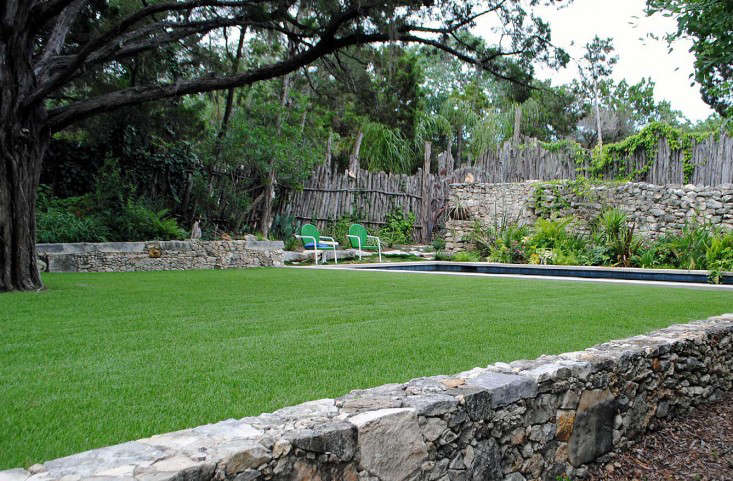 Above: The swimming pool disappears into the surrounding landscape. “It’s very simple,” says Moring. “There are a lot of spring-fed swimming holes around here and I was trying to create an illusion to them with the design.” 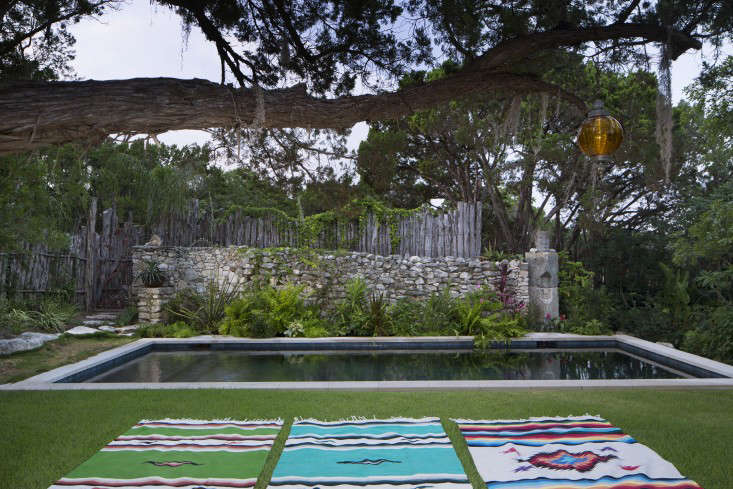 Above: A fence encloses the pool to discourage local wildlife from wandering in to take a dip. “It’s mainly to keep deer and coyotes out of the area,” says Moring. “Some people call that a coyote fence. If the gate gets left open, I’ve seen seen both coyotes and deer come in.” 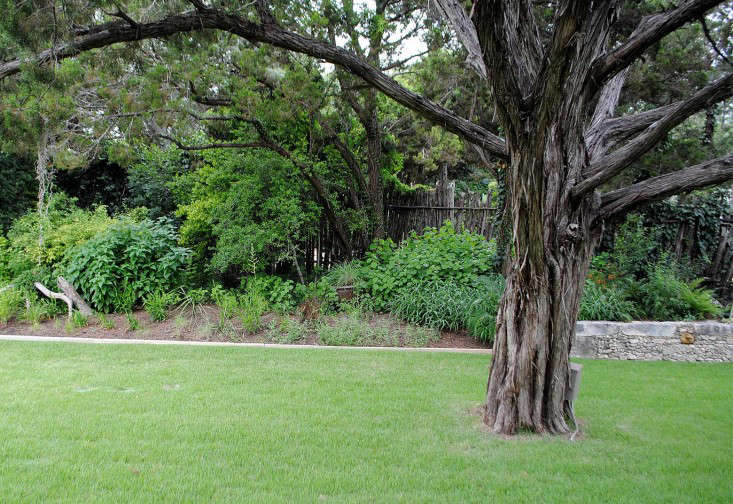 Above:  A mature Ashe Juniper tree (a Texas native) is underplanted with disease-resistant Palisades Zoysia turf grass, which tolerates shade and requires less water than the average lawn. “In Texas, we have to be conscious of water use,” says Moring. “Most of the garden, except for the lawn and the beds around the pool, is not irrigated and has to survive on its own.” 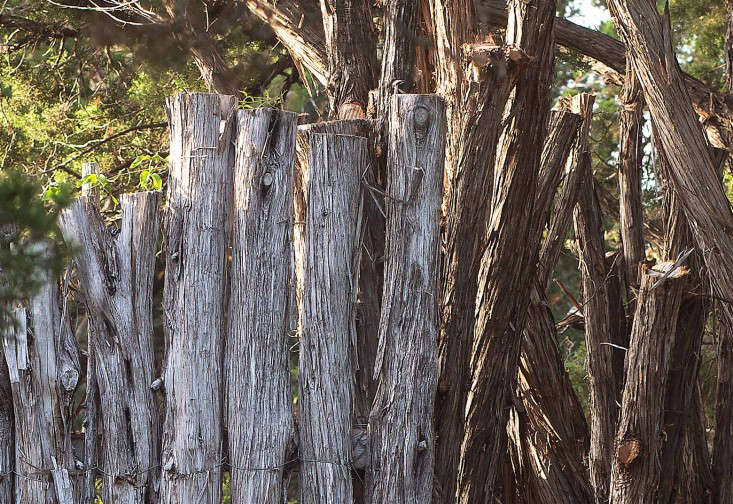 Above: Cedar post fences on the property were made from Ashe junipers cleared from the property. 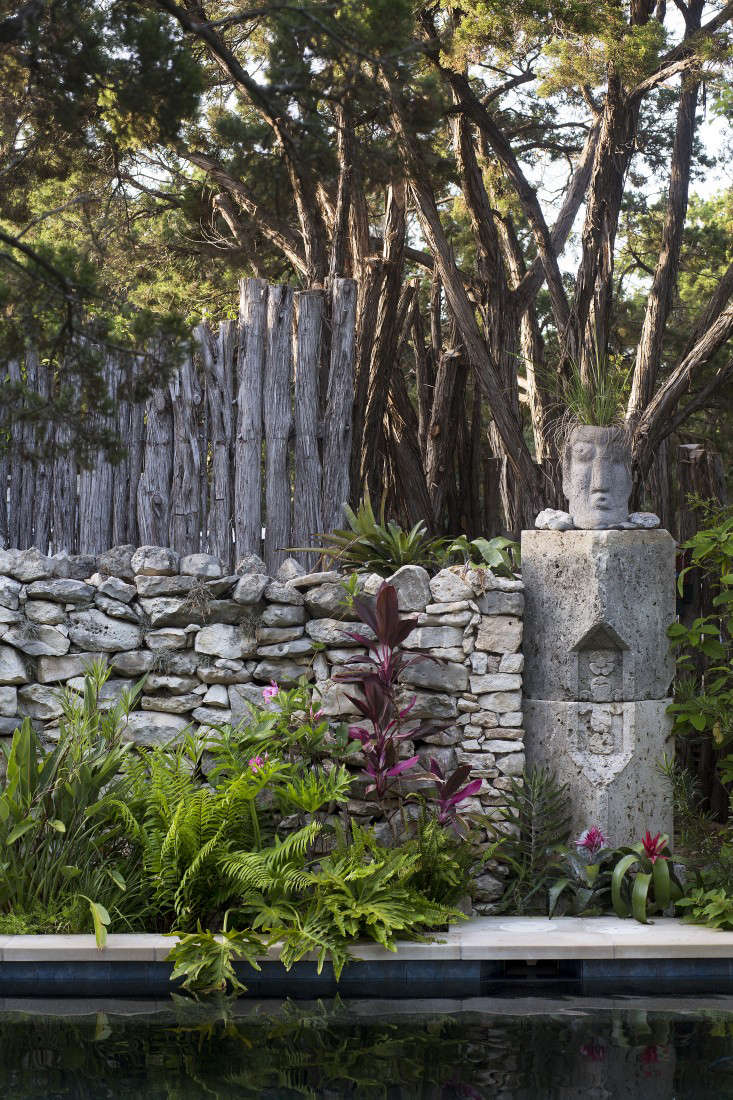 Above: The rock on the wall behind the pool is limestone gathered from the site. 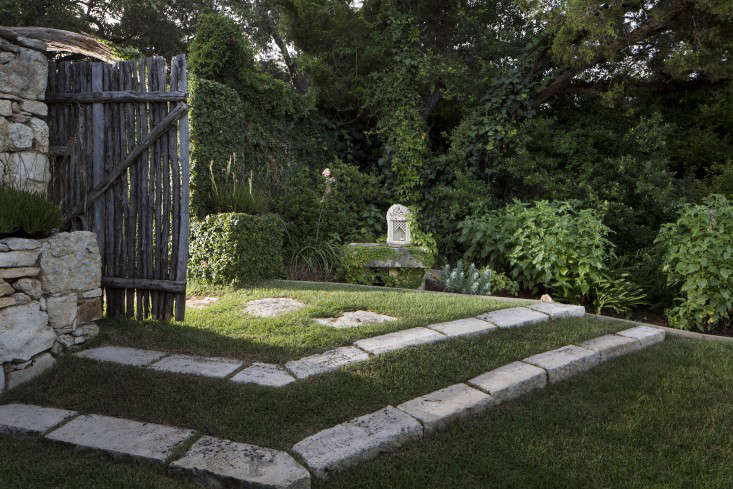 Above: When Moring bought the property, “it had been a rental and sort of neglected, with not much here except some trees and a nice view,” he says. 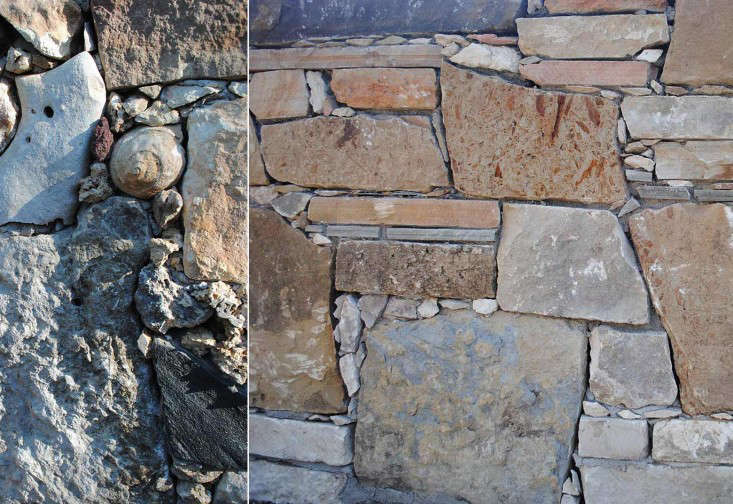 Above: “I really used a lot of leftover stone from other projects,” says Moring. “It’s mostly limestone, different sizes and different styles, but all local stone.” 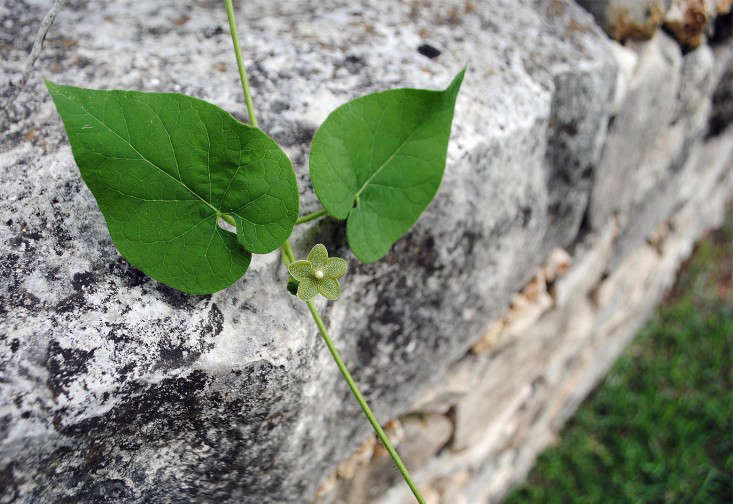 Above: “This is a great little native plant most people walked by a million times and never noticed, I remember my dad pointing it out to me one time,” says Morning. “It’s a type of milkweed. We call it a pearl vine, and in person it really does look like it has a pearl in the center.” 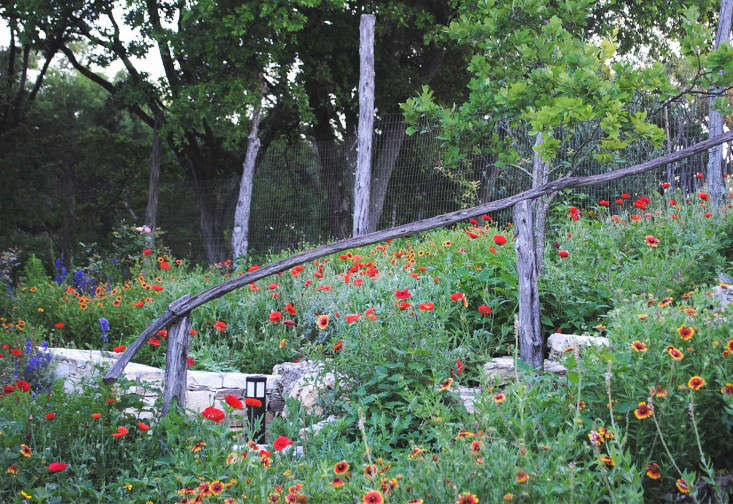 Above: A staircase leads down from the higher elevation of the house to the vegetable garden beds. The banister is Ashe juniper, gathered on site, and native orange and yellow gaillardias (also known as blanket flowers) are interplanted with red poppies; both are encouraged to encroach on the pathway. 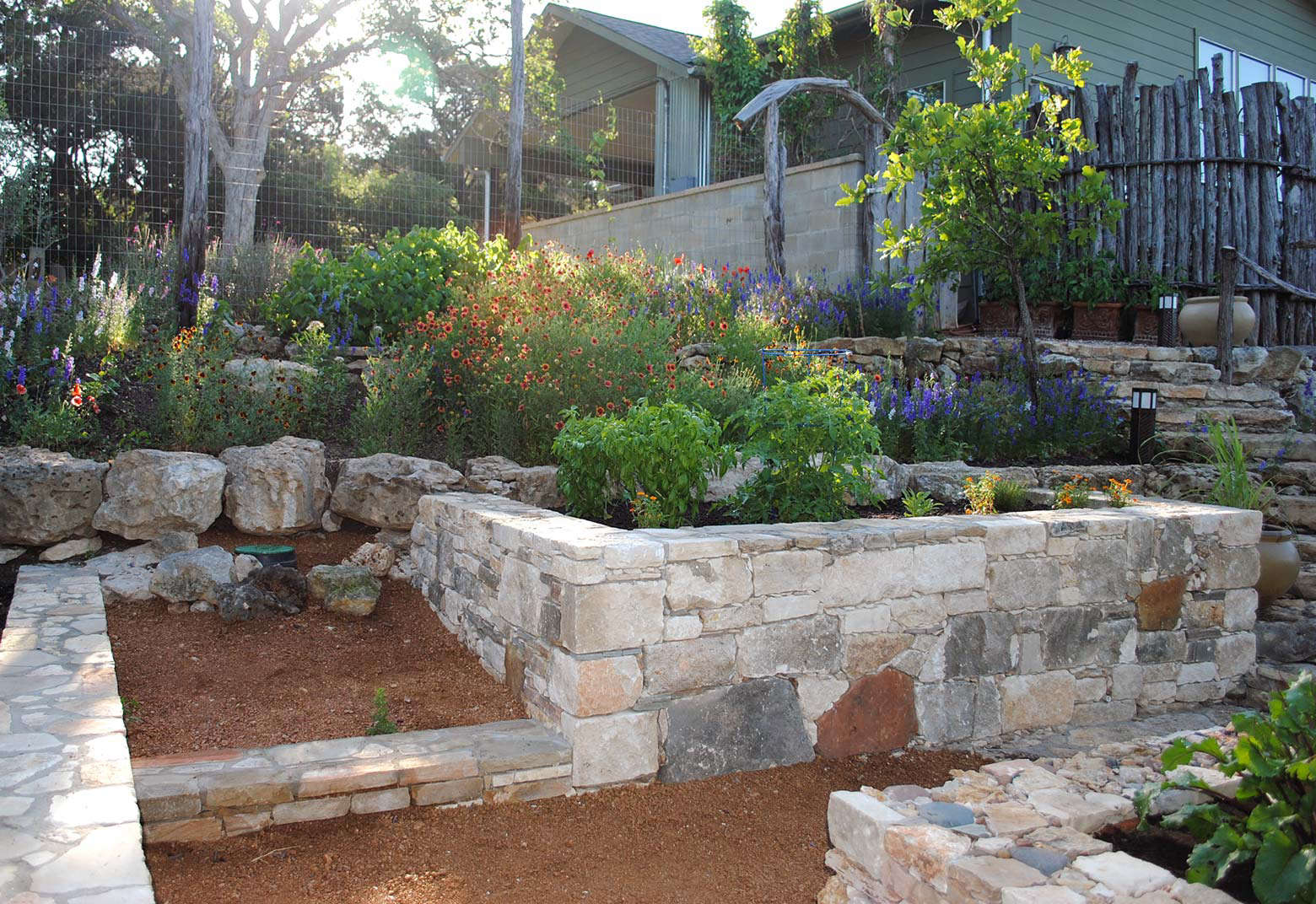 Above: Limestone retaining walls define the beds in the vegetable garden. 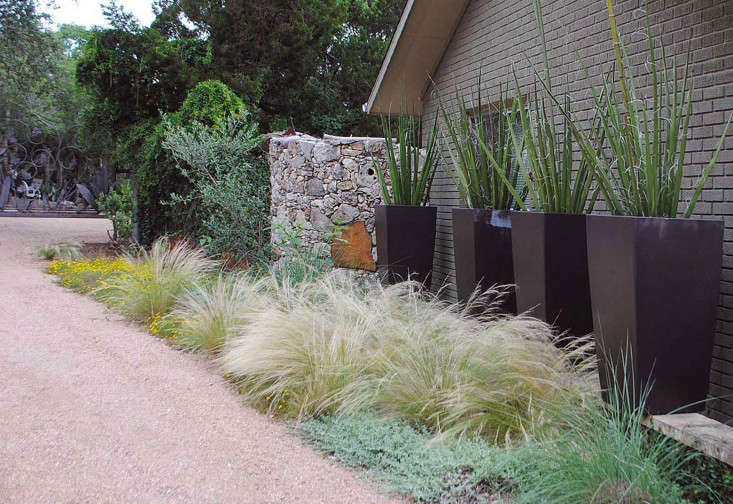 Above: Decomposed granite on the driveway was sourced from nearby Marble Falls, known for being home to the quarries that supplied the pink rock used to build the state Capitol. 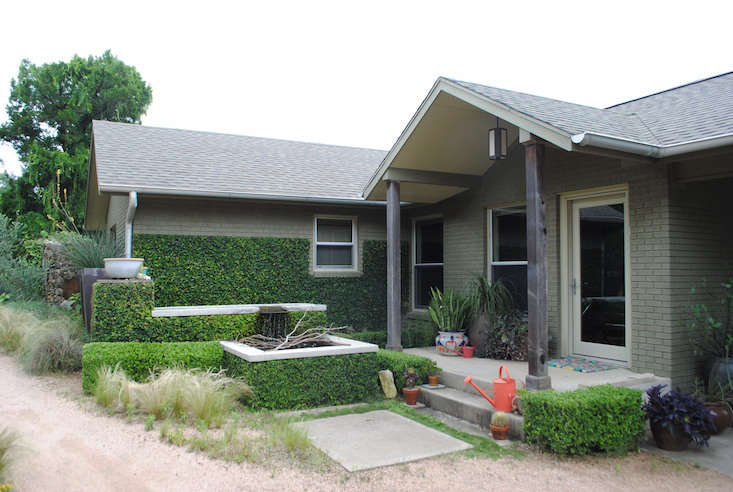 Above: Photograph by Tait Moring.

Mexican feather grass is planted in clumps at the edge of the driveway and a tiered fountain next to the entry welcomes guests. 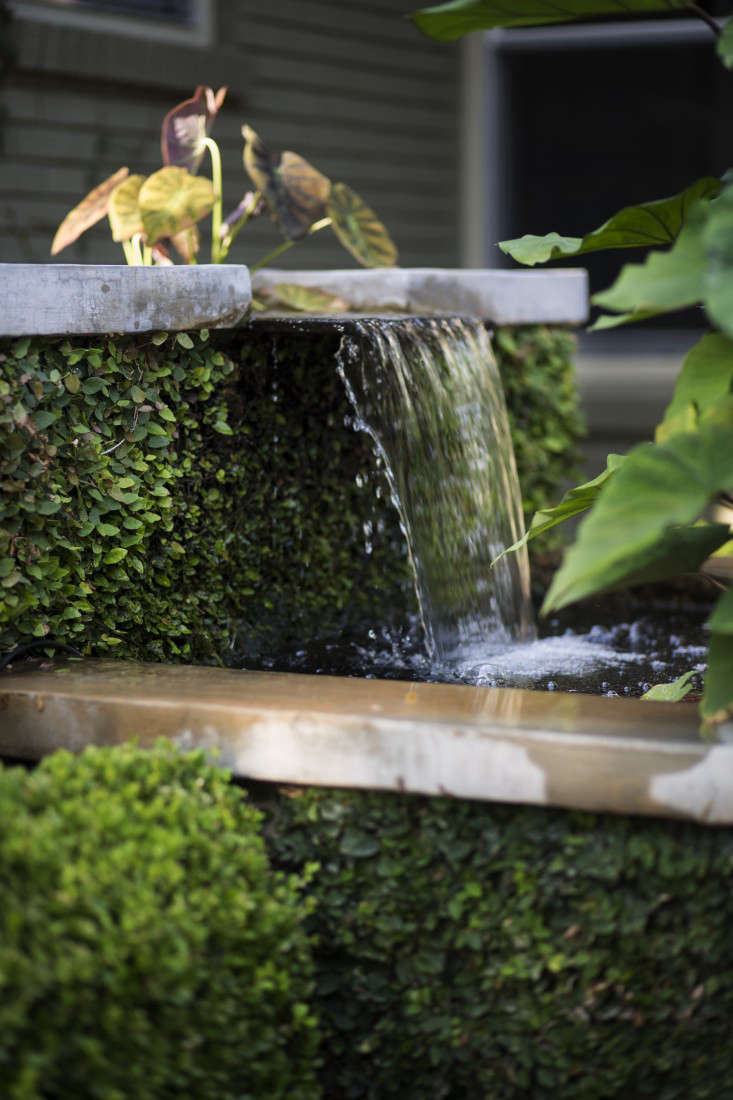 Above: A curtain of creeping ficus covers the fountain’s walls. 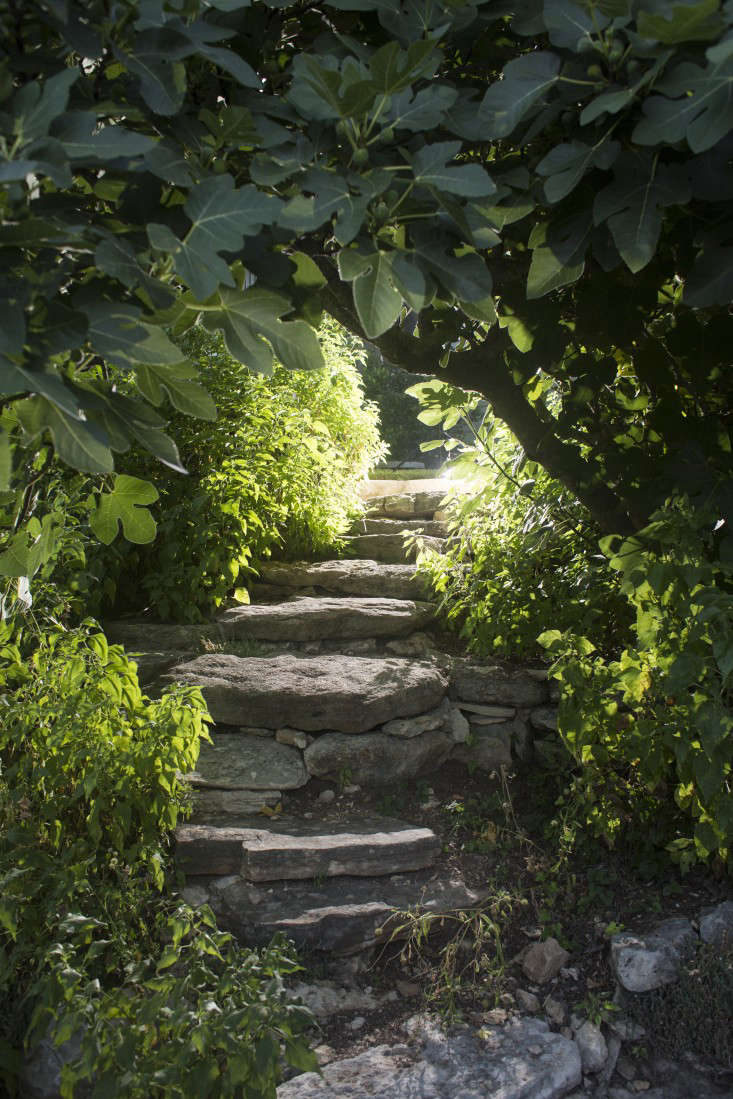 Above: “Texas is so diverse, with so many different eco-regions,” says Moring, who laid out paths and trails on the 22 acres he owns. “The hill country to me is the most beautiful. There’s a lot of diversity here, everything from desert to pine woods to coast and plains.” 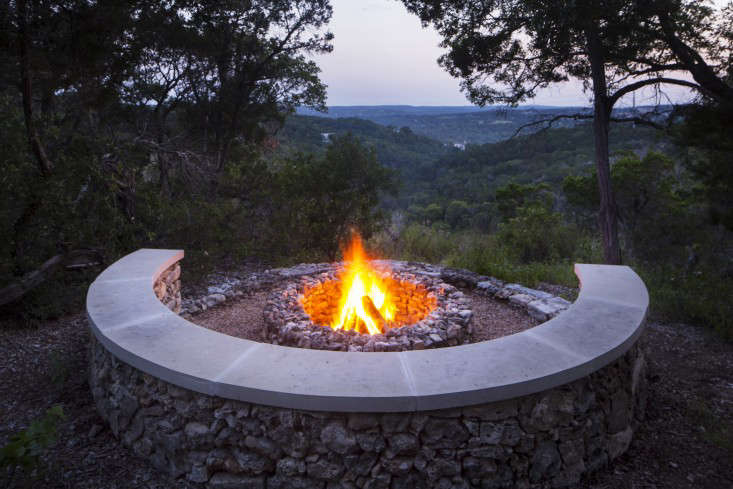 Above: The fire pit is “a bit of a hike from the house,” says Moring.  “I was drawn to this spot because it overlooks the valley and Barton Creek,” he says. “And there is a beautiful and somewhat rare tree, a Texas madrone with red bark, nearby.” 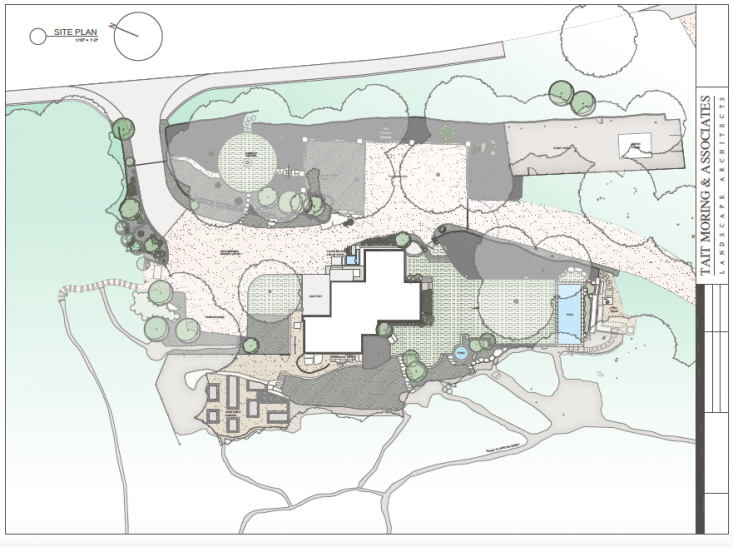 Above: Moring’s garden plan: “You wouldn’t know it, but I’m on a really busy highway. This house was built in 1954, and I think it’s the only one left. A lot of commercial properties here now and most of the houses are off the road. The front of the house is something people drive by all the time and we try to make it feel private.”

Gardenista Roundup: For Love of Boxwood

Everything You Need to Know About Grass Block Pavers

What to Read in This Week’s New Directions Issue