The Cellars-Hohenort Hotel, in the winemaking suburb of Constantia, Cape Town, is the kind of place where, on a given night in South Africa’s young democracy, you might have bumped into Nelson Mandela, Jimmy Carter, or Desmond Tutu. In the 21st century the hotel is favored by honeymooners, local politicians, foreign tourists, garden lovers, and neighboring families who drop in for Sunday lunch or afternoon tea. And an oil baron who reportedly requires 1,000 fresh roses every week for his suites. 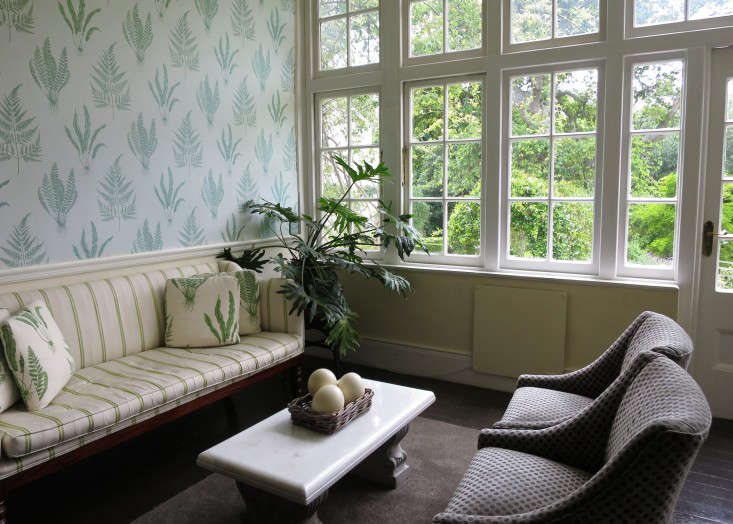 Above: While five-star luxury is inherent, it is the nine-acre garden wrapping this historic property that defines it. 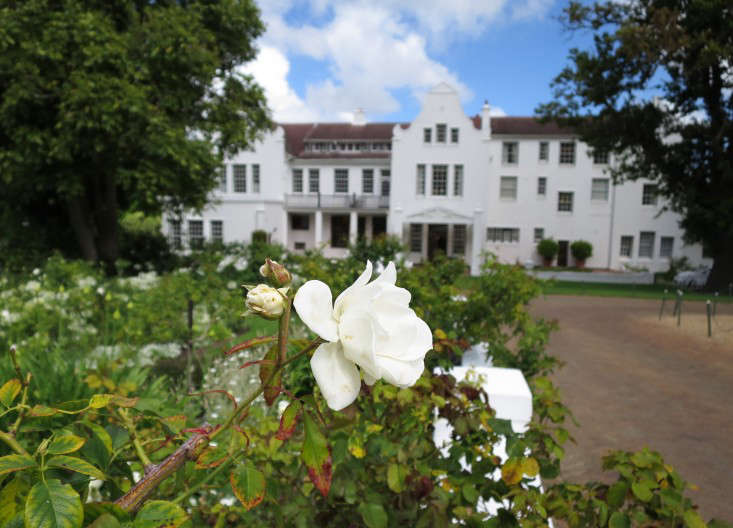 Above: Flowers greet visitors the minute the car door shuts behind them in the car park (a feature infrequently associated with horticultural interest). Agapanthus, Iceberg roses, and alyssum form what in most driveways might be called a traffic circle. But in this arrangement the bricked roads become paths between flower beds. 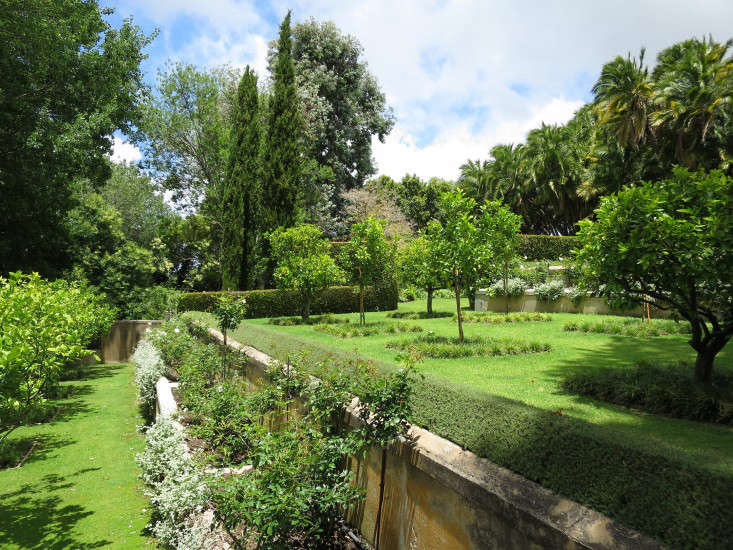 Above: The effect is one of a small, beautiful town where one strolls from terraced citrus orchard to rustic garden, rose garden to vineyard, forest walk to Gary Player-designed putting green, all planted around a collection of buildings– hotel, restaurants, and spa–where flowers, greenery, and immaculate lawns knit the parts together. 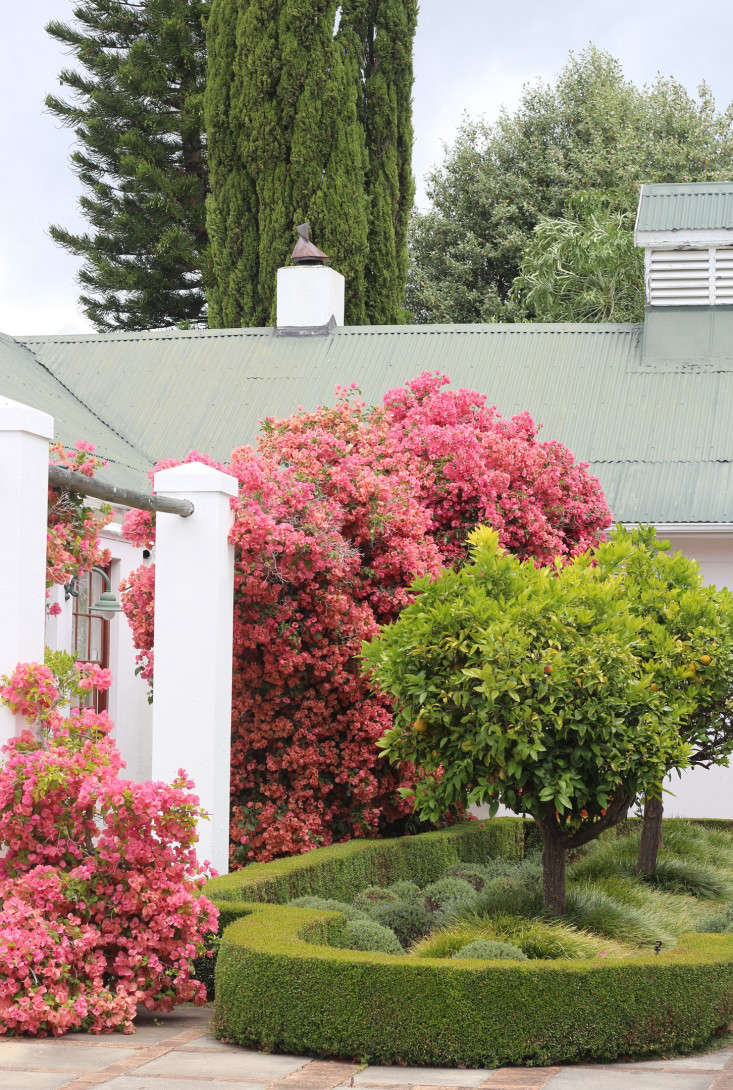 Above: Recently, at the height of the Southern Hemisphere summer, pink Bougainvillea billowed over whitewashed guest suites (converted from an original carriage house dating to the 17th century). The climber’s loose form and riotous pink is emphasized by the clipped green control of a knot garden at its feet, in a courtyard’s heart. 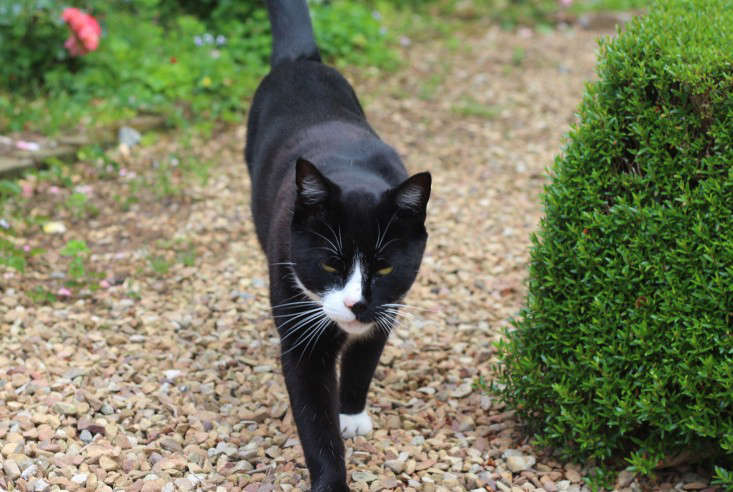 Above: Far from being aloof, the Cellars-Hohenort welcomes its neighbors. A black and white cat marches down a gravel path. “That’s Mister Socks,” says an elderly man in long leather gloves, deadheading spent roses. “He belongs to neighbors but he likes it here…” The rose pruner is a retired banker, and cousin to Jean Almon, the woman who defined and led the development and care of these gardens for 24 years, retiring from her full-time duties only in early 2014. 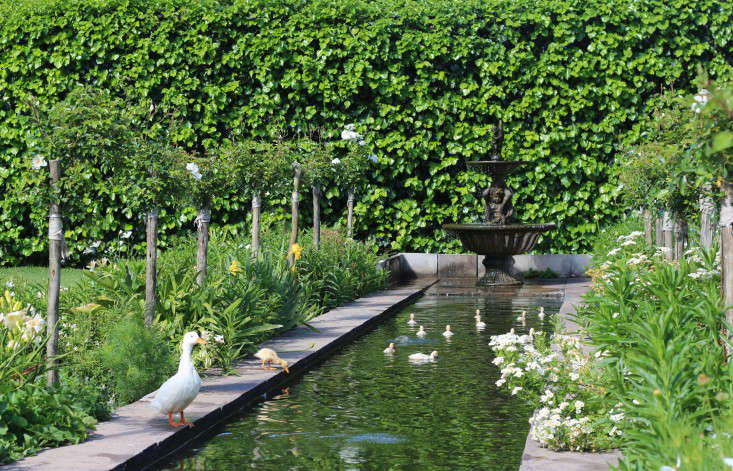 Above: White ducks paddle on water framed by flowers and herd their fluffy young beneath signs that warn cars of their presence. Indicating the water feature, Almon tells me on a recent visit, “This was supposed to be a rill,” inspired by a visit she made to England. “But then a Dutch visitor looked at it and said, ‘That is a canal.’ So now it is a canal!” The ducks don’t care. 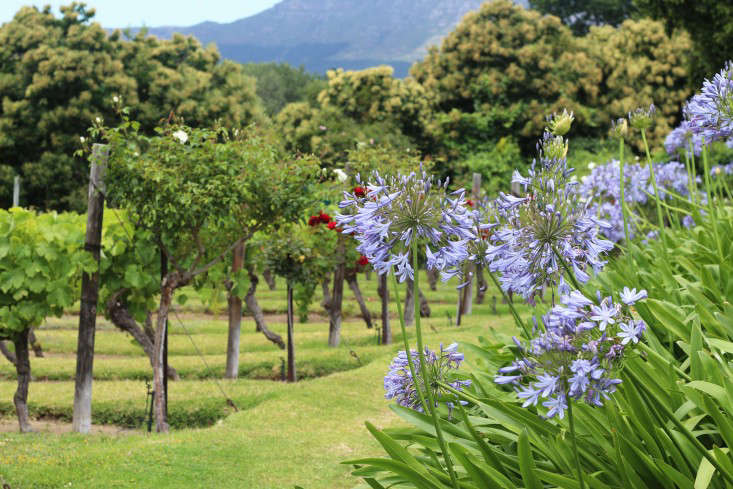 Above: There are other animal guests, I am told by Niall McKrill, the hotel’s new garden manager (his wife Jill, designs all the flowers for the hotel’s interiors), as we sit under the shade of an old yellowwood tree on the lawns: a Cape cobra visits the resident vineyard to snack on mice. The grapes go to acclaimed wine estate, Klein Constantia, which also planted the vines.

McKrill shows me a small nest in an Abelia hedge where a female prinnia sits undisturbed, hedge-clipping suspended for the duration. Cape dwarf chameleons are encouraged in the gardens, and help with pest control. But they cannot cope with the porcupine that comes rooting around four or five nights a week. She devours indigenous arum lilies and dahlias. 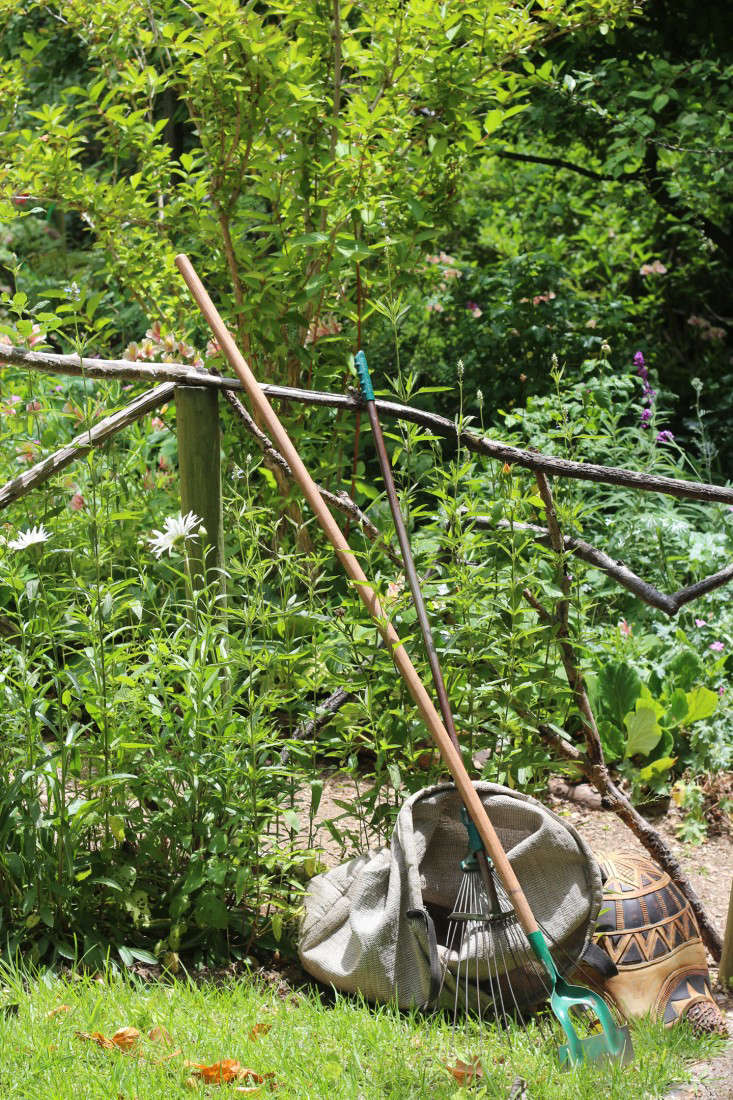 Above: McKrill works with a team of four gardeners. “They know what they are doing,” he says, “They know the soil, and they use their initiative.” It shows. Two horticultural students swell the ranks for six-month stints to acquire practical skills such as compost-making. “It is incredibly important to garden in an eco-friendly manner,” said hotelier Liz McGrath, explaining the approach to gardening here. 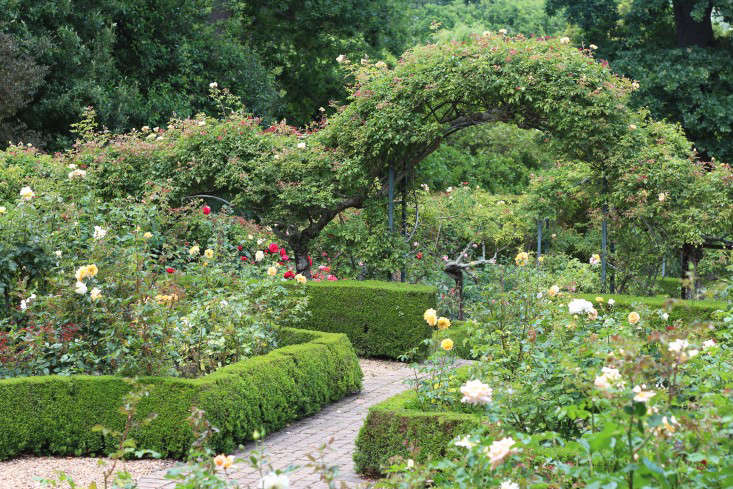 Above: Every year six tons of the compost are dedicated to the rose garden alone. Roses are the favorite flower of McGrath (pronounced muh-GRAAH, but Mrs. M to her staff). The powerhouse hotelier first spotted the potential in two modest, gardenless and adjoining hotel properties in 1991. She bought one, The Cellars, and two years later acquired The Hohenort, uniting them and transforming them into their current opulence and verdure. Asked about her relationship with gardens, McGrath responded, “I grew up in a home with a beautiful garden and a father who was a passionate gardener. I remember how well he taught me to love plants and to respect nature.” 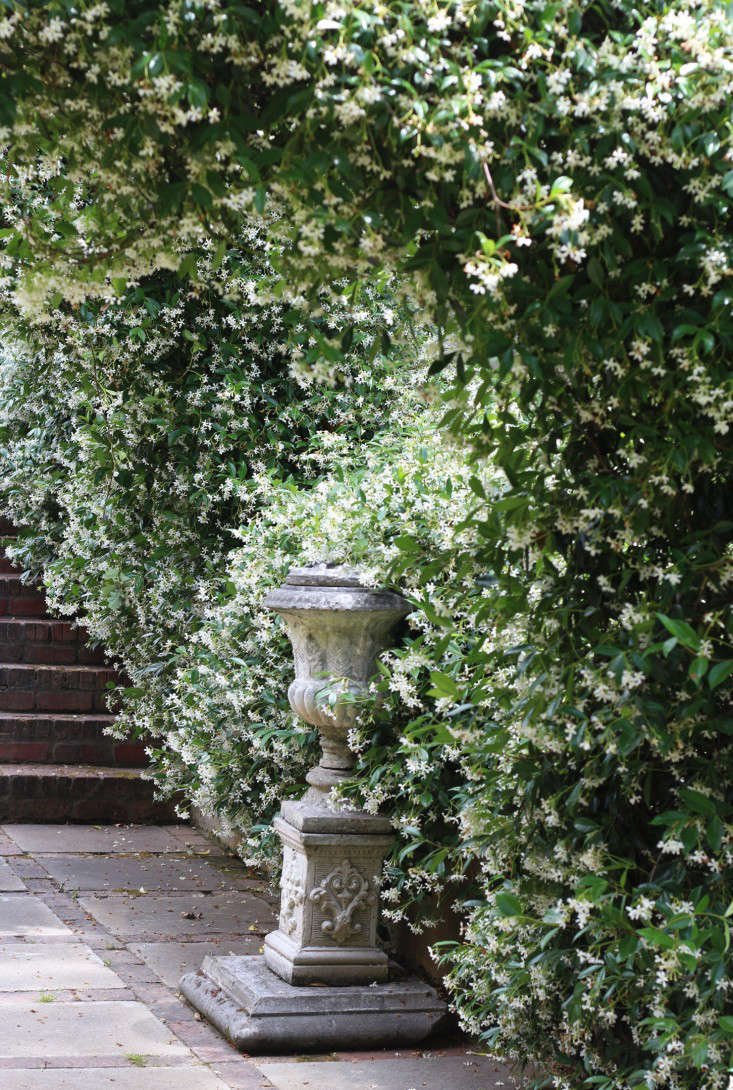 Above: In summer the gardens are perfumed. Confederate jasmine spills over iron arches beside the terraced citrus orchard, and frames an old urn among the flowers. 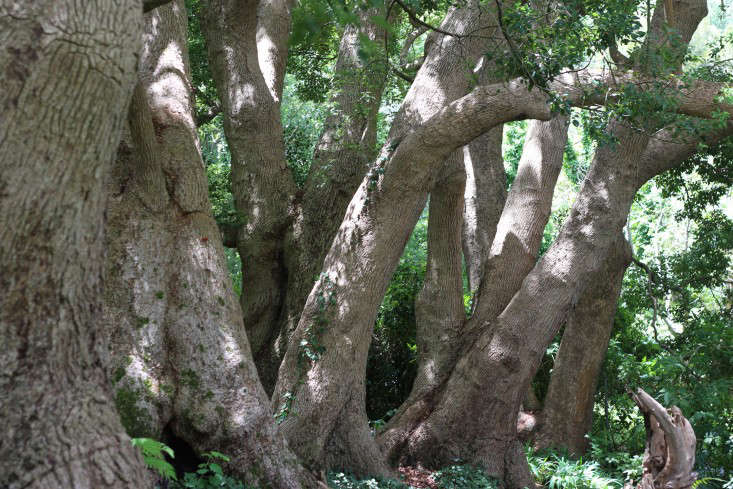 Above: Jean Almon tells me that growing up in Port St. John’s on South Africa’s subtropical Wild Coast, she “loved walking in forests and damp places.” We are walking now beneath giant old camphor trees whose character echoes that of their even older cousins on the Vergelegen wine estate. Beneath them lie the stumps of the oaks which first flanked the original drive, here, more than 300 years ago. Almon liked them enough to leave them, inspired by The Stumpery at Prince Charles’ Highgrove, which she loves. 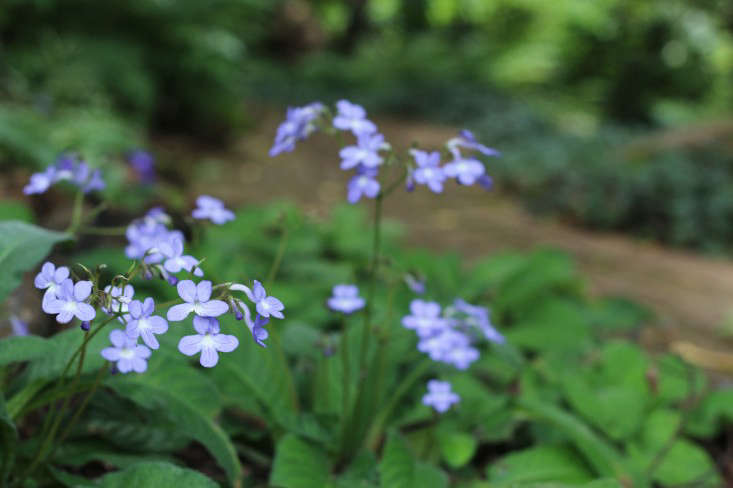 Above: At these exotic camphors’ feet grow local plants–Streptocarpus, Plectranthus and masses of forest-dwelling Clivias–which thrive in the shade. The path is mossy and damp and we dodge a sprinkler as it arcs past us, showering this forest garden with moisture in the dry Cape Town summer.

Above: Pausing beneath the grandly stepped gables of The Hohenort part of the hotel, we look up at a towering bank of hydrangeas dominating the perennials below. “These plantings were supposed to echo the steps,” says Almon, but the hydrangeas have a mind of their own. It is hard to keep a happy plant down. 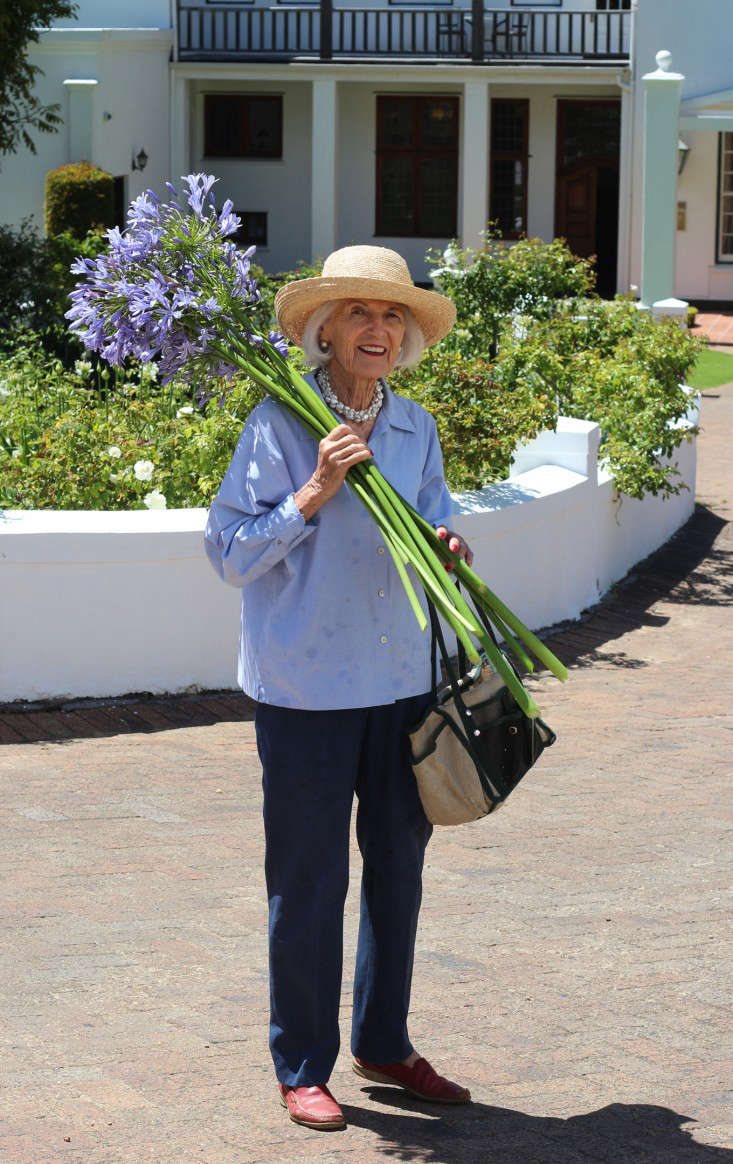 Above: I’m on flexi-time now, smiles the 83-year-old horticulturist. She still visits the gardens most mornings, elegant in a broad-brimmed hat, wielding dead-heading Felcos in hands whose nails are a matching red. Spotting some rogue blue agapanthus, she marches towards them and climbs into a bed on a steep incline. “This border is supposed to be white,” she murmurs. And five minutes later it is. A guest watches in admiration. 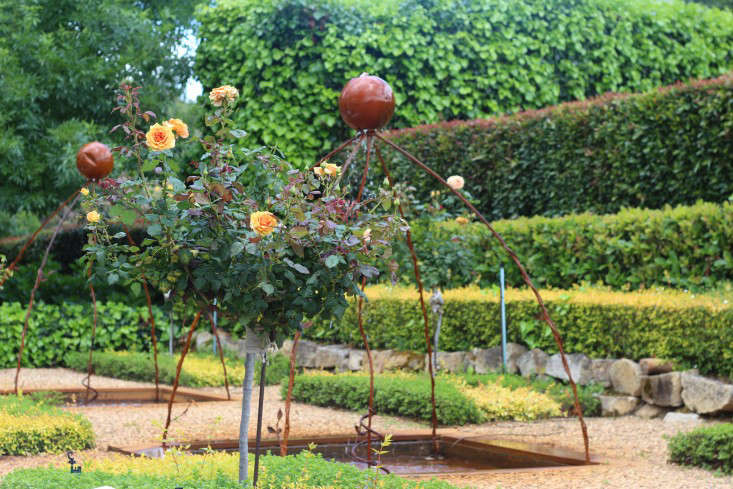 Above: Below the agapanthus border is a striking formal garden on a narrow terrace. It is The Cellars-Hohenort’s winning entry in the 2006 Cape Town Flower Show. The distinctive yellow-peach standard rose flanking the pools at the center is the Liz McGrath rose, bred by famed South African rosarian Ludwig Taschner. Local ironsmith Simon Beede created the fountains poised over the water like oversized waterbugs. 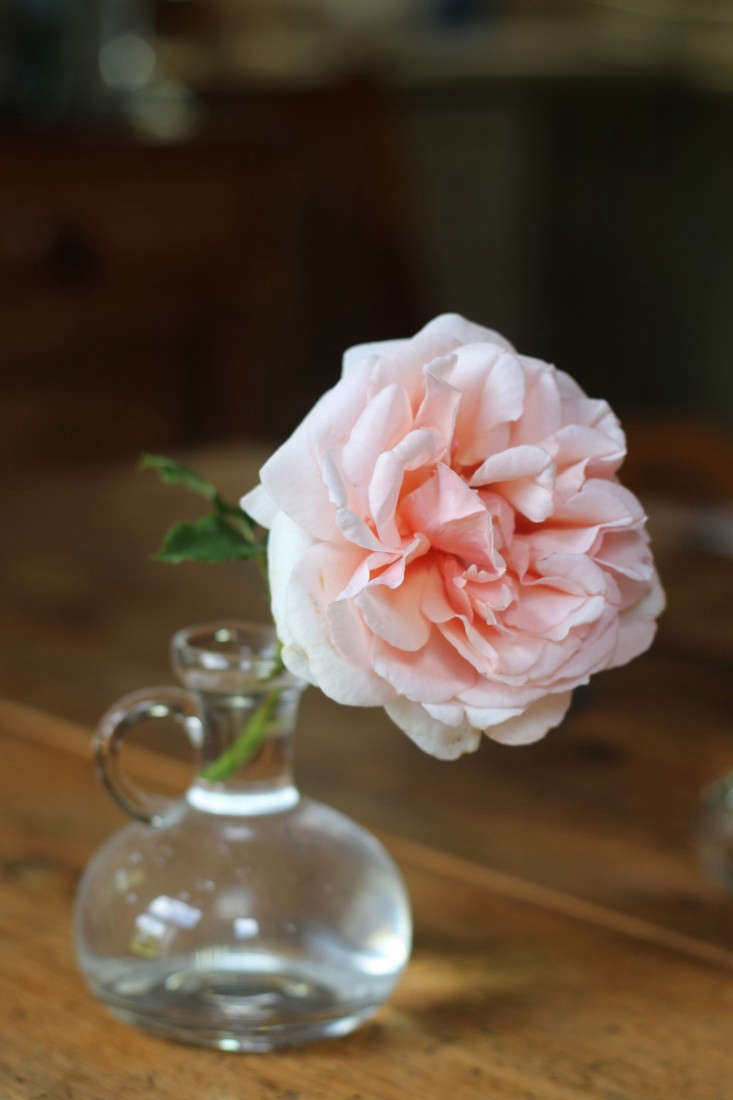 Above: The bespoke roses do not end there: last November the new Relais & Chí¢teau rose was launched at the hotel’s Conservatory restaurant. The young roses are planted in their own bed in the gardens. Soft pink, plush and perfumed, the cut blooms last well: the one I was given remained fresh in water for an impressive week. 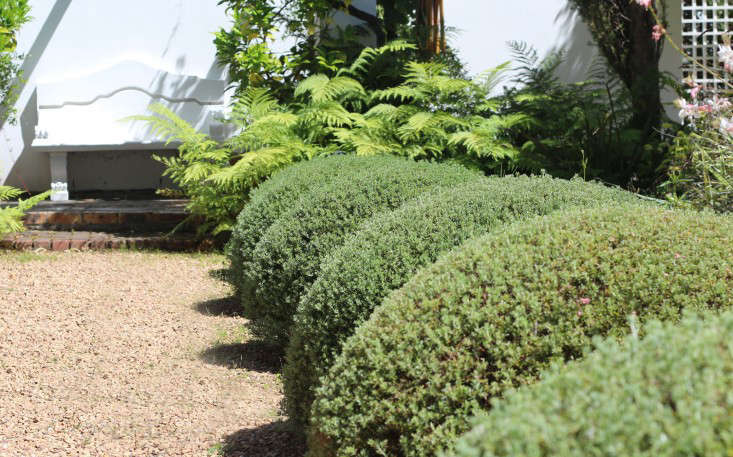 Above: Clipped Westringia shrubs are the focal point from the patio where I sit with Almon at the end of our walk to share coffee and freshly baked scones. McKrill and his wife, and the pruning banker are invited to join us. The banker shows us a stick insect that has clung to his glove. “Do you feel comfortable here?” McKrill asks me, as he fingers a guest’s feedback form (“Niall is a real gem,” it reads). I do. 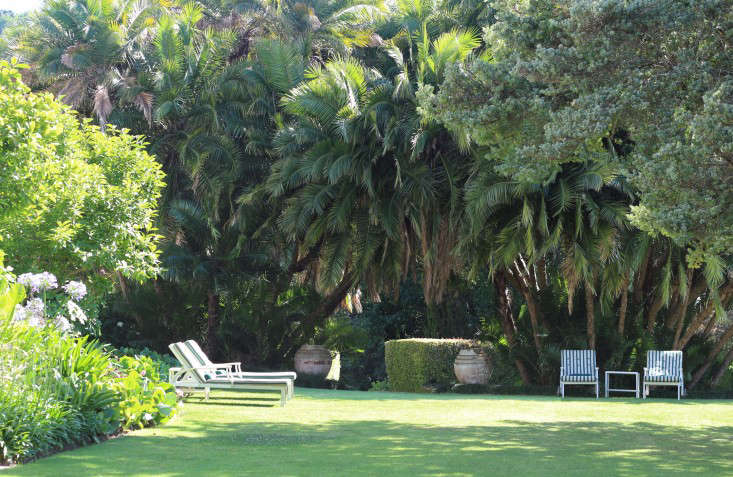 Above: I don’t really want to leave. And that seems to be the idea:  “I would like my guests to remember the garden as a place to wander in peace and tranquility,” say McGrath in an email, “and to quietly enjoy the views and feel of the beauty of The Cape.”

I believe they do.

For more of our favorite Cape Town gardens, see: