Clients in the Berkeley Hills wanted a landscape plan that would work well both for the patio spaces surrounding the house and with a steep hillside below–which, by the way, happened to be a public right of way. This week, Janet Hankinson from Janet Hankinson Landscape Art & Design (who also designed chef Alice Waters’ garden) talks about how she created a single plan to integrate the disparate spaces. For the next 48 hours, Janet is available to answer your queries: leave questions in the comments section below.

The clients had worked with architect Mark Mack to complete a remodel of the house. They also had contracted with a garden designer to develop a landscape plan for the property. But with the hillside, “the clients were concerned about sinking a lot of money into property they did not own,” Janet says. Here is the innovative solution she devised to create a coherent landscape design for the site: 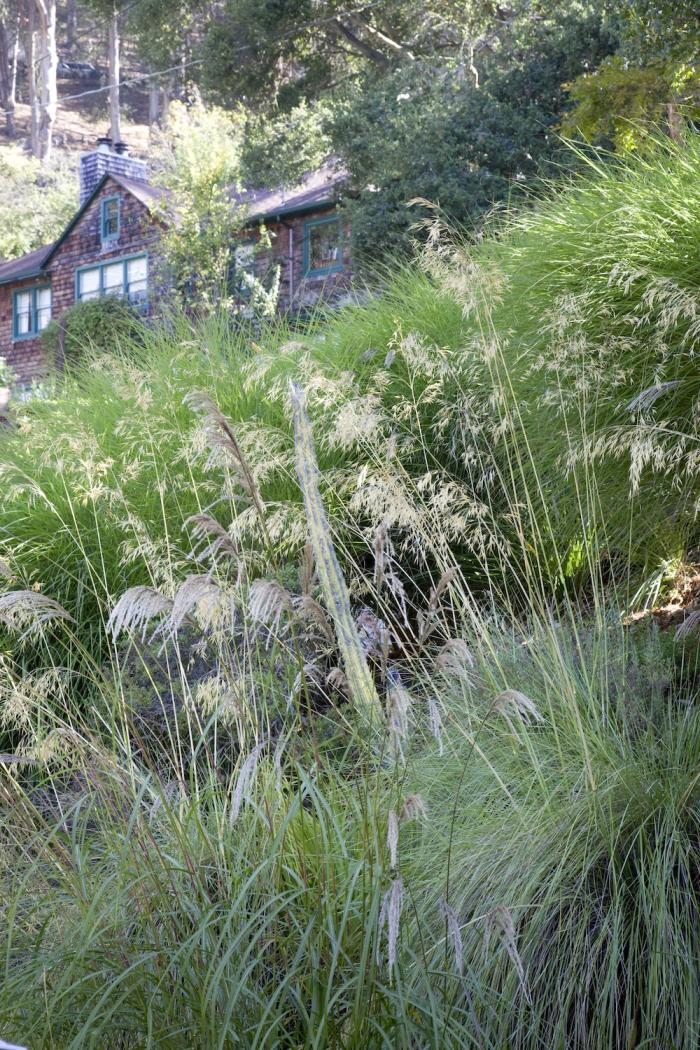 Above: In the distance, a neighbor’s house is visible. The hillside was planted in two contrasting grasses, one an evergreen, Muhlenbergia, and one deciduous, Miscanthus sinensis “˜Gracillimus.’ “The previous plan called for installing large rocks to make a more naturalistic landscape,” Janet says, “but that would have cost a million dollars–well, maybe not a million, but a lot of money. Instead they asked me to come up with something much more budget conscious. I thought if I planted very tall masses of grasses, we could create that kind of volume, visually, but with plant vegetation instead.” 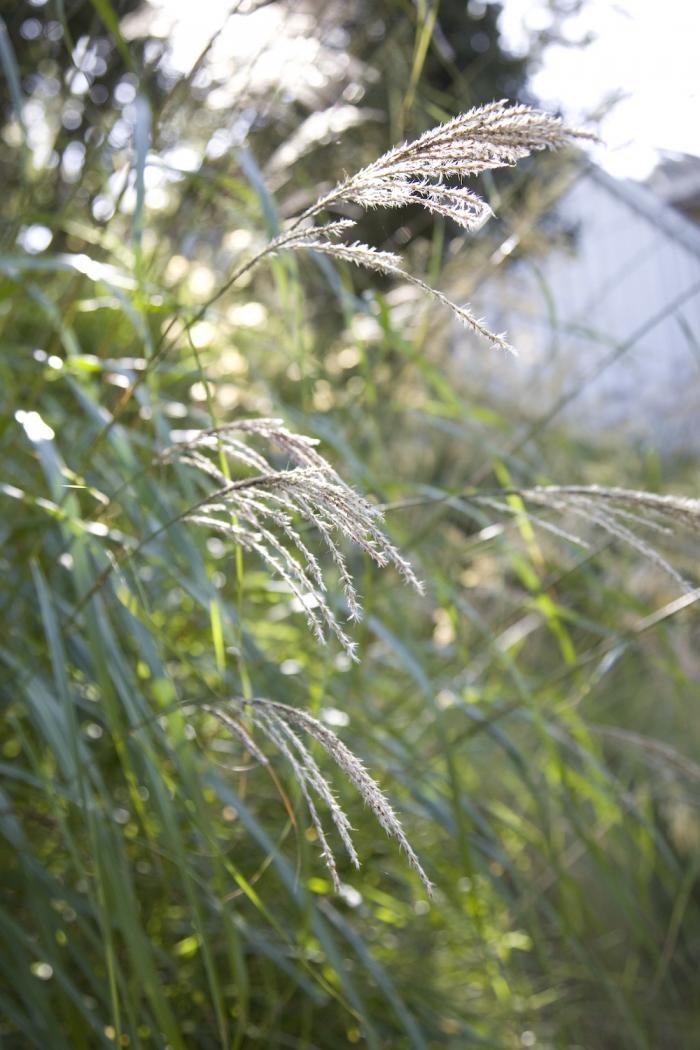 Above: Janet’s design called for drought-tolerant drifts of feathery Muhlenbergia (foreground) and Miscanthus sinensin (in the back). Janet says of the Miscanthus, “You have to cut them back to about six inches in January or February. But for about five months of the year–September to January–they do a lovely show of tall, wavy, bronze flower heads. And the deer won’t eat them.

“The hillside’s natural drainage and soil erosion had to be addressed,” Janet says. “It would have been a mistake to clear it all out and start from scratch. I wanted to enhance the stabilization that was already created there by rosemary and baccarus, and I wanted it to blend in.” 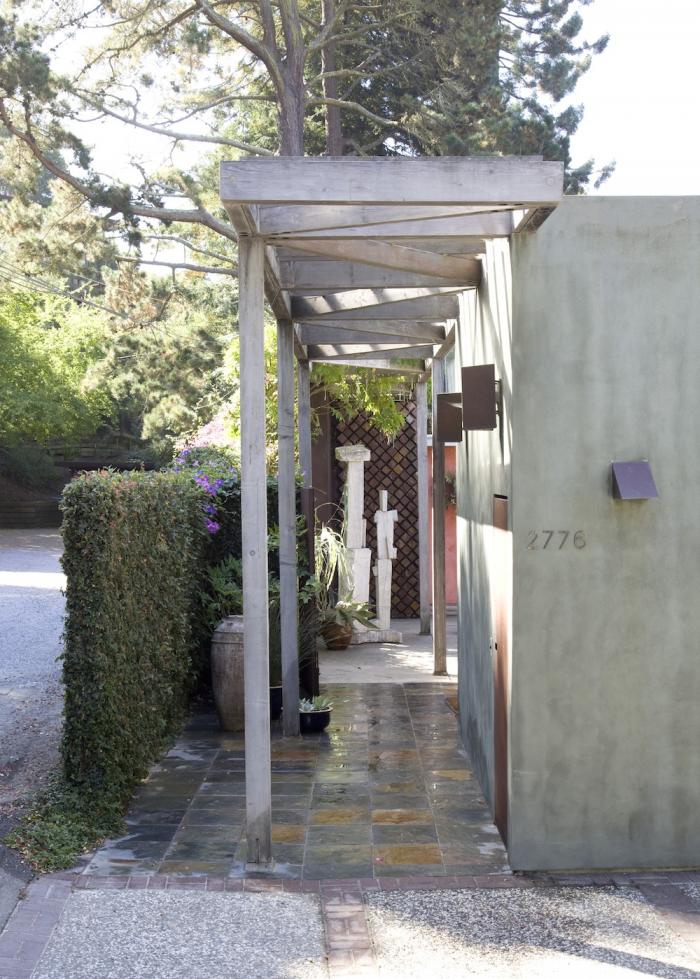 Above: An atrium Mr. Mack added to the house. “There was a horrible breeze block wall that needed vegetation, so I put creeping ficus on it,” Janet says. “It’s a fast grower so you do have to cut it back every year, otherwise it gets thick and thatchy.” 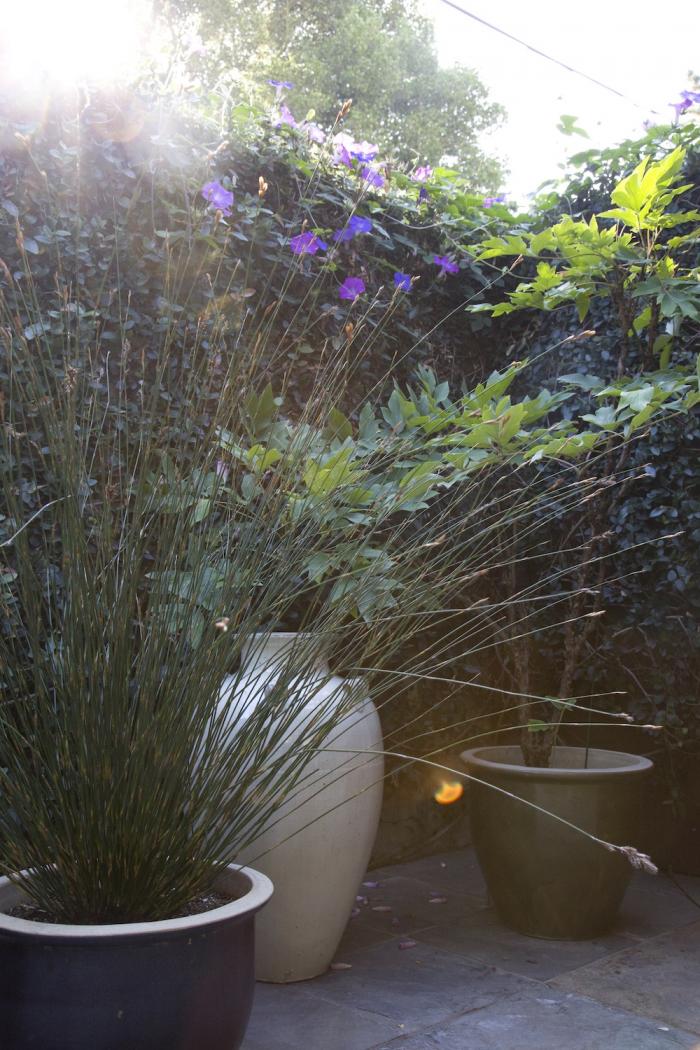 Above: In a courtyard adjacent to the house, everything had to be deer-resistant. In the green pot to the right, a tree peony: “It blooms every year– and for an unknown reason the deer never eat them,” Janet says. “It’s just the most gorgeous pale pink; it looks like a Japanese print and is just exquisite.” 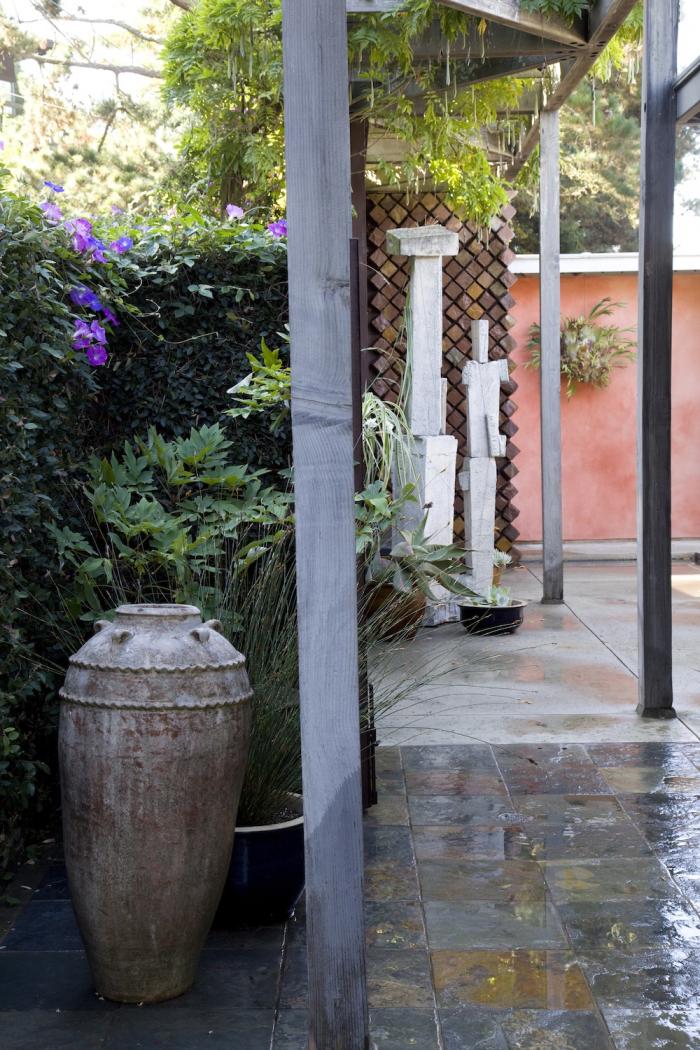 Above: Wisteria, morning glory, the tree peony, and variegated miscanthus in the ground next to the sculpture. 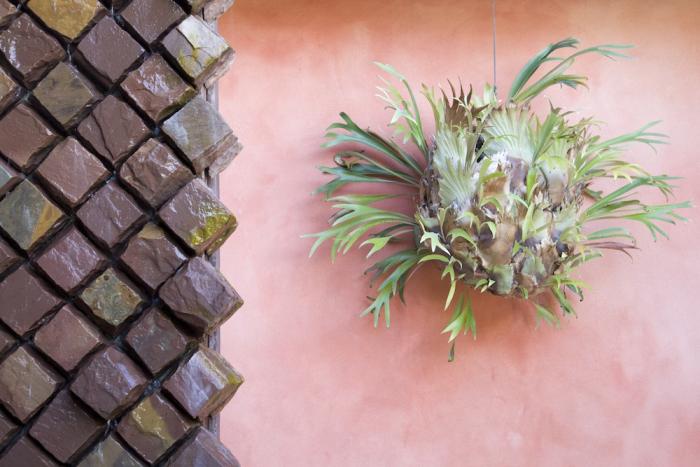 Above: The client had inherited her mother’s staghorn fern and wanted to put it in a special place. “I want to help my clients find their own personal solutions to their outdoor spaces,” Janet said. For another client who moved into a house with a collection of potted cacti from a previous life as an apartment dweller, Janet found ways to incorporate them into the new landscape design. 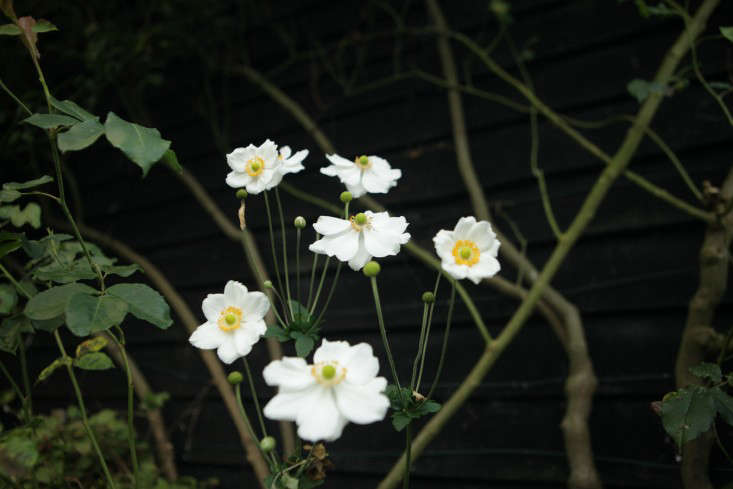 Above: Japanese anemone hybrid ‘Honorine Jobert’ does well in half sun, half shade. 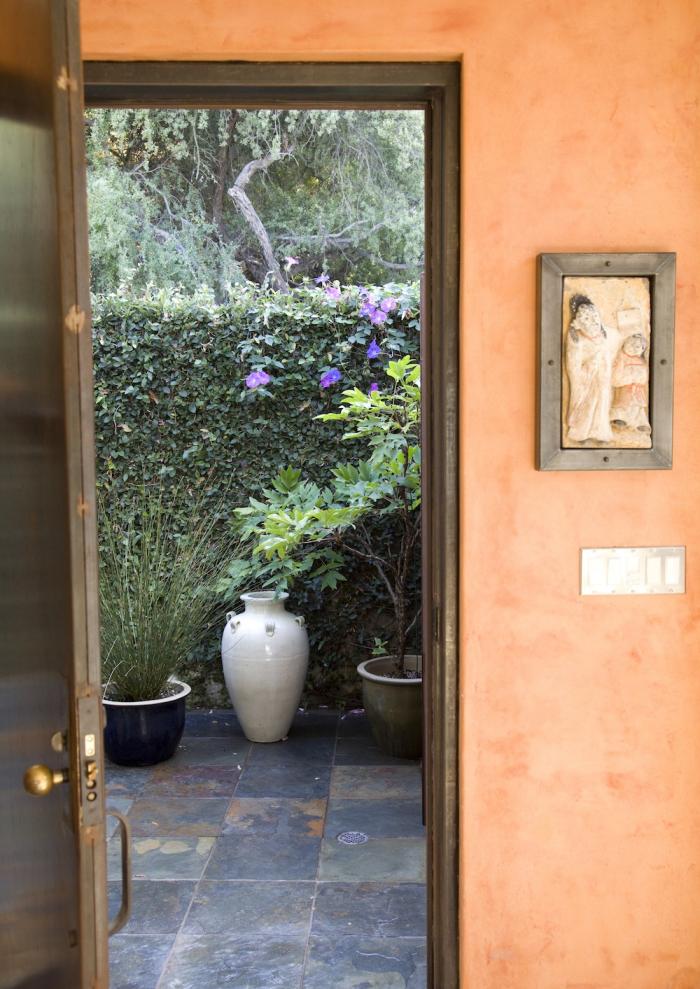 Above: The view through a doorway. “The goal is to make the connections and links between a house and its garden, and how you view the garden is often from the inside,” Janet says. “When I first visit a new client, I ask to see the inside of the house so I can see how the views relate to the garden. I design with those views in mind. Even in a house without an obvious connection to the garden–if, say, the gardens are viewed only from upper stories–it’s possible to create a visual link by borrowing from elements of the surrounding landscape.” 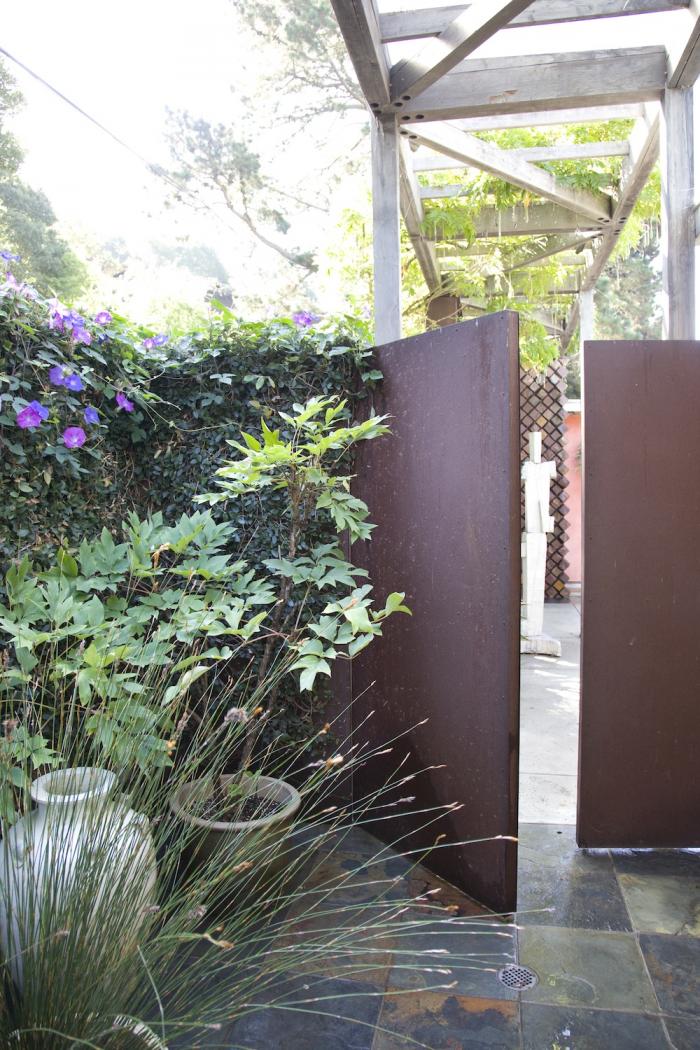 Above: “Hummingbirds love morning glory,” Janet says. “You want to encourage as much diversity as you can, as far as bees and insects and birds. I always try to think of berries and pollen because that’s what makes a garden alive, isn’t it?” 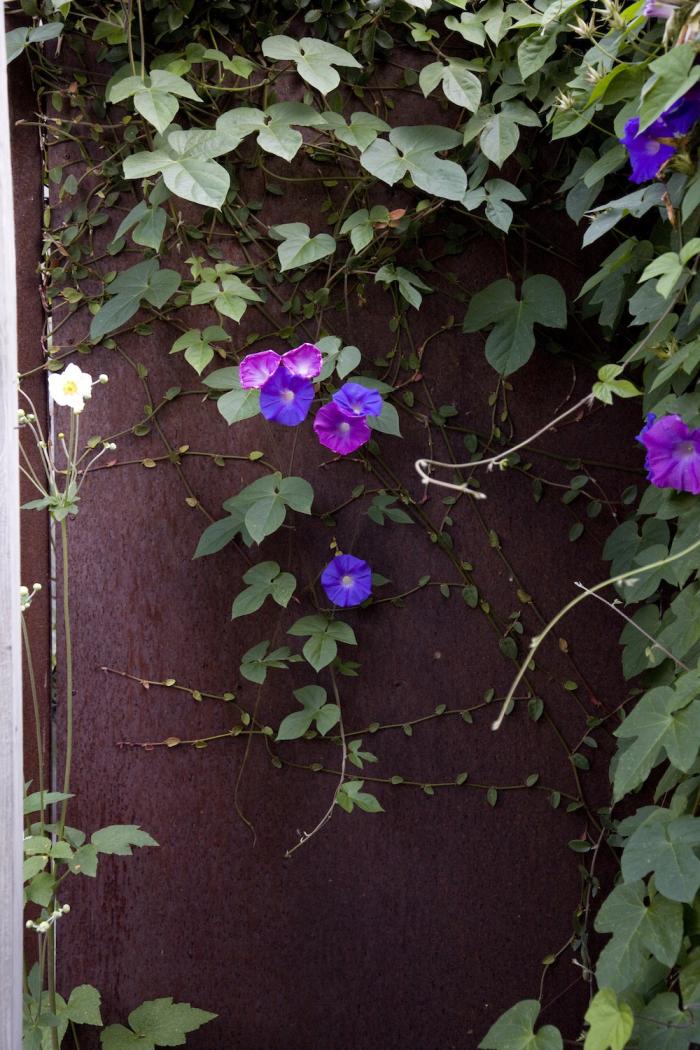 Above: Creeping fig, Japanese anemone and morning glory: a closeup.

Pink Grasses: 10 Ideas for Muhlenbergia in a Landscape