New York City is known for a lot of great things. Picturesque scenery isn’t one of them. Save Instagram, there are very few places to get a glimpse of pure, unbounded nature. That’s why when John D. Rockefeller donated land for the Cloisters museum in the 1930s, he also purchased 700 acres in New Jersey–across the river–to preserve the view. Forever. Little did he know.

After I heard the other day that LG Electronics has plans to construct a corporate headquarters building that would loom several stories above the tree line of the New Jersey Palisades (there goes the view Mr. Rockefeller bought for us), I decided to brave the cold to head uptown to Fort Tryon to see what all the fuss was about. 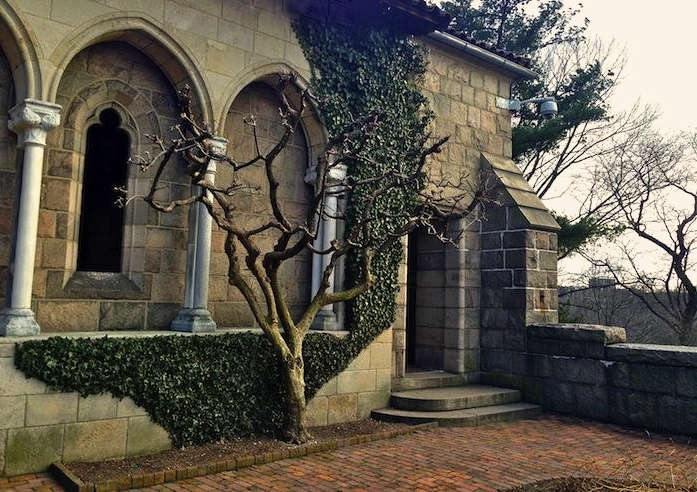 Above: I did some research in advance (OK, brief Googling on the bus ride there), and learned that the museum, which is a branch of the Metropolitan Museum of Art, is partially composed of reassembled sections from a handful of French cloisters. The architecture of the building resembles that of the French cloisters that constitute some of its interior. It also houses sculptures, tapestries, architecture, and other forms of art from Medieval Europe.

While most of the garden seemed to be hibernating for the winter months, a belt of ivy gave the garden a swatch of color. (N.B.: For more ivy inspiration, see The Ideal Ivy.) 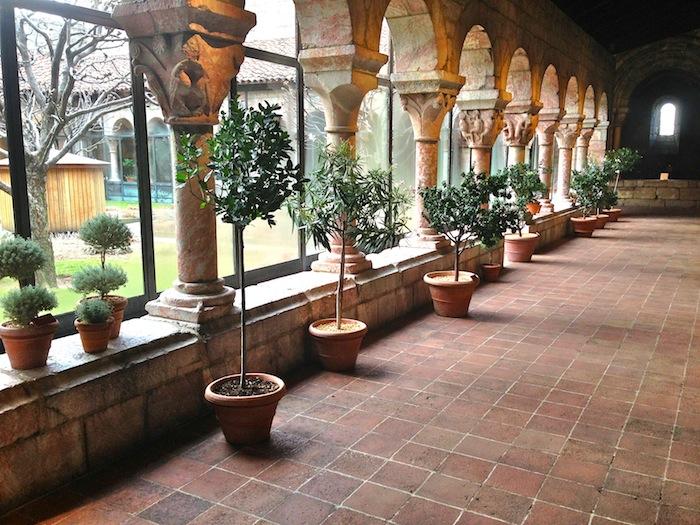 Above: To get to the view, I had to pass through a few exhibits on the main floor of the museum. I stopped to check out this interior facade, originally built as part of the Cuxa Cloister, which is now decorated with citrus trees and looks out onto a walled-in garden. (N.B.: Want to emulate this look? See DIY: Potted Indoor Citrus Trees.) 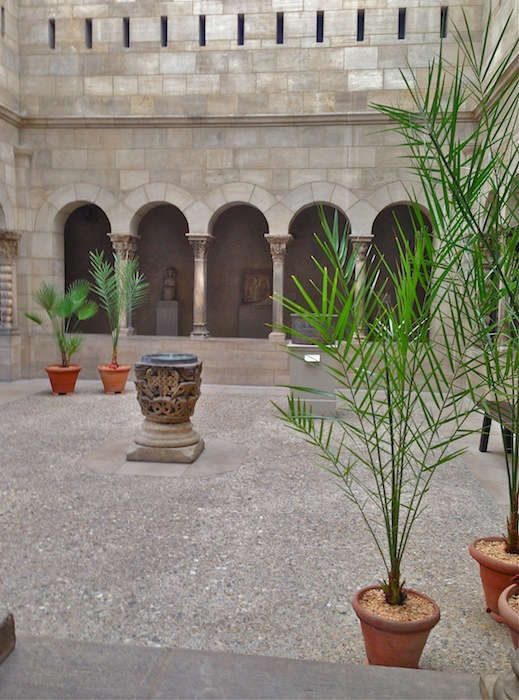 Above: You can get lost on your way to the view. Not that that’s a bad thing. I got a bit turned around and wound up in the most serene, peaceful room I’ve ever encountered in four years of living in New York City. Elements that make up the columns in this cloister come from the Benedictine abbey of Saint-Guilhelm-le-Désert. 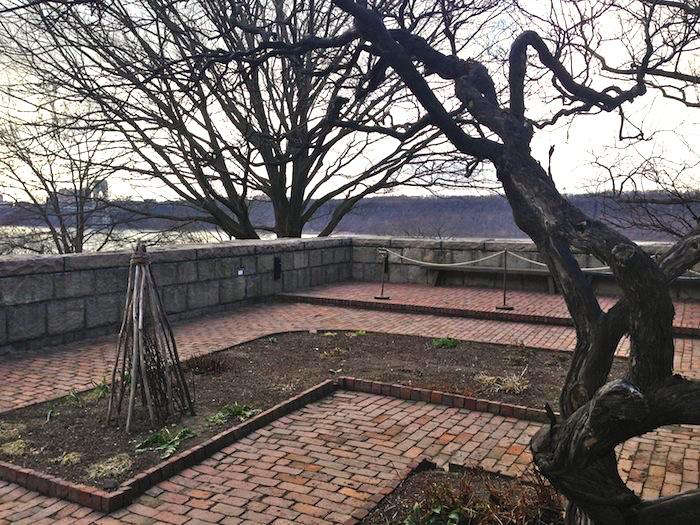 Above: Finally I found the small wooden door that leads to the back balcony. A combination of unusually strong winds and the quick transition from a dimly lit indoor space to this bright, expansive one made me feel like I was emerging from some sort of sci-fi time and space portal in a totally new universe. 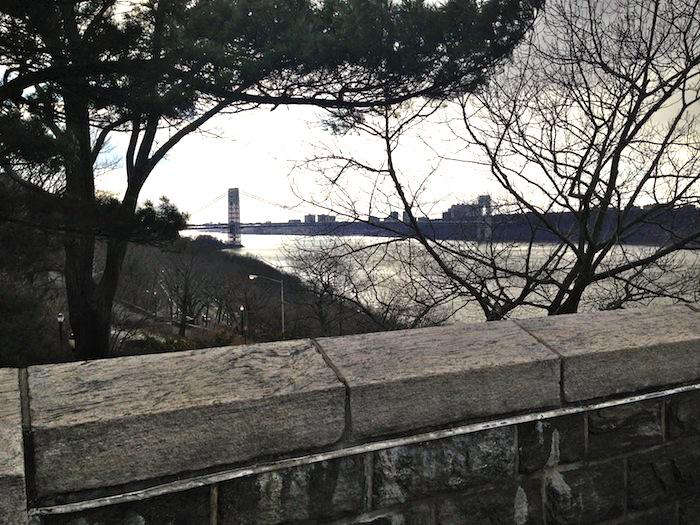 Above: Thanks to that cold, stark, windy weather, the whole balcony experience was like something out of an Emily Brontí« novel. To the south, I could see the George Washington Bridge, which spans the Hudson River to connect the Washington Heights neighborhood of Manhattan to Bergen County, New Jersey. 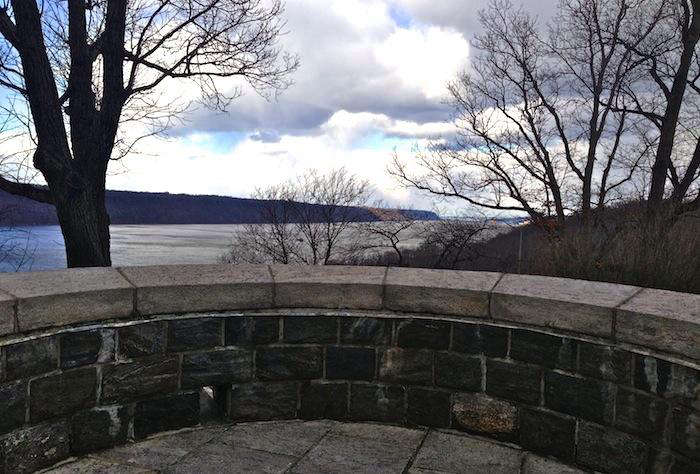 Above: Oh, and did I mention the view? Just two minutes out there of craning my neck in all directions to see the miles of cliffs across the Hudson River made the blustering, 20-degree weather seem inconsequential.

After I went back into the museum (and spent 15 minutes blowing on my icy hands to regain feeling), I decided to check out the view from another angle. I found the exit to this a garden next to the Bonnefont Cloister exhibit, one floor below the main balcony. Map by Google. 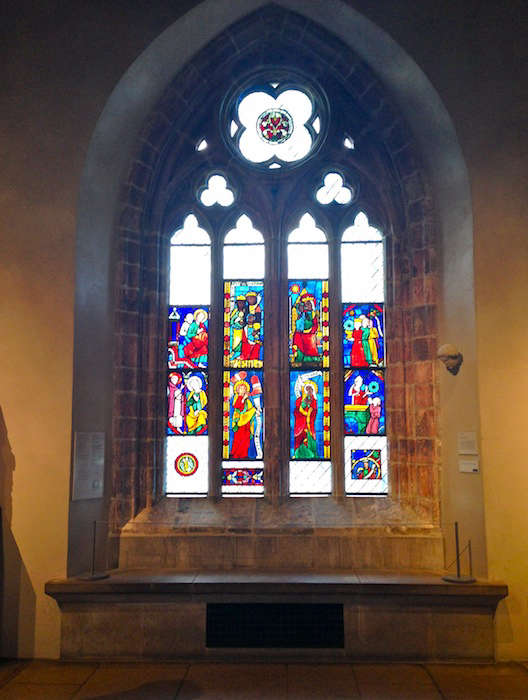 Above: On my way out: Medieval art and architecture. The stained glass in particular was so beautiful, I felt it warranted the full attention of a second visit and vowed to return. 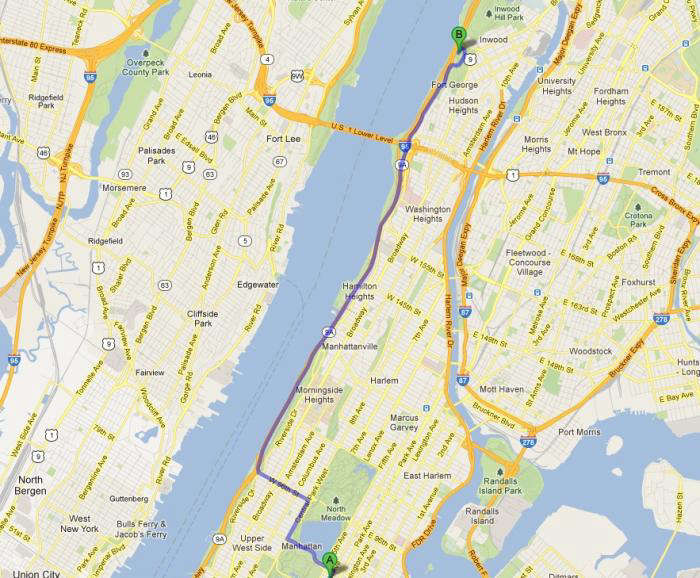 Getting there: I took the M4 bus in both directions. You can get on at any stop between 83rd Street and Madison Avenue) Point “A” above) and the Cloisters (Point “B”). From Broadway and 116th Street, both legs of the trip took about 40 minutes. The M4 conveniently drops off passengers and picks them up right in front of the museum (though I hadn’t been sure what to expect and was wearing about 17 layers to combat the frigid weather). For a complete list of bus stops, see Manhattan Bus Schedules.

For more urban hikes, see the rest of our Hike of the Week posts.

Rough Yet Refined: Planters from Denmark

Rehab Diary, Part 3: Uncovering the Past in Nancy Lancaster’s Garden at Wilderness House

Outbuilding of the Week: A Tiny Open-Air Theater in Norway

A River Runs Through It: Architecture Brio in India