“Low maintenance” is often at the top of a client’s wish list when a garden designer is called in. A formal garden, with topiary that only needs an annual clip might be considered a low-maintenance garden by some. But for a garden that’s truly undemanding, we suggest forgetting formality and planting perennials and bulbs straight into rough grass.

Called “tinkering with turf,” and “grassy wild gardening” by the garden writer Anna Pavord, gardening in this way brings to mind the ideas of avant-garde Victorian garden writer William Robinson, who loathed formality and bedding in particular. For those of us who already love the meadow style, this is even easier than scrubbing out a border, adjusting the soil conditions, and starting all over again with an annual wildflower meadow (and the promise of years of adjustments ahead).

“This style of gardening needs to be done with existing turf,” says Pavord. Ideally ancient turf which may have all sorts of good things (and bad) lurking beneath the surface. “That is something you can’t always arrange,” she acknowledges.

The idea is to add to your existing long grass plants which thrive in meadow conditions. Geranium ‘Mrs Kendall Clarke’ holds its head up in any formal border but can relax among friends in long grass. It is a type of geranium pratensis, pratensis meaning “of a meadow.”

Red Clover (trifolium pratense)–25 grams is $2.64 from Seedaholic–is another classic meadow option. And a favorite meadow cutting flower is the Devil’s Bit Scabious (succisa pratensis); a packet of seeds costs $2.55 from Seedaholic. 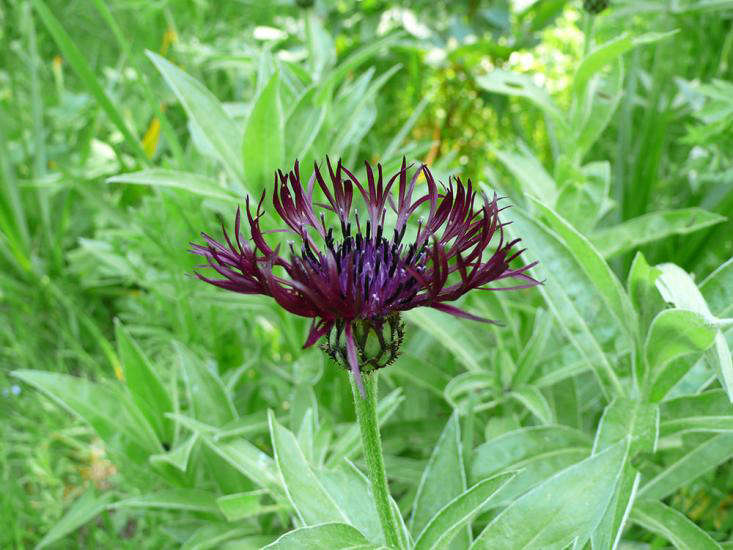 When I trained at Cottesbrooke Hall as an under-gardener, I spent some time in the early spring digging out clumps of grass by the thatched Wendy House and plonking in various “spare” plants from the formal gardens. This part of the garden had no planting plan and cost nothing. The plants I helped to put in included geranium (phaeum as well as pratensis); centaurea ‘Jordy’ (above); veronicastrum and for me, a surprising one: peonies. None of them would be out of place in grassland and were placed here on the edge of the Wild Garden.

I tried the same technique at home with mixed success: I added anthriscus ‘Ravenswing’ and actaea simplex ‘Black Negligée’ for some dark, black-ish contrast amidst all the green. I can barely see any of the perennials I put in because the grass is so long, so I went back to Cottesbrooke to see how last spring’s plantings are doing now.

“Most of these plants are very vigorous,” says Phylip Statner, head gardener at Cottesbrooke Hall Gardens. “They are too vigorous in the borders, but here,” he continues, “they have to sing for their supper.” They are not drowned out by grass because of the relative density of the planting: grass is on the retreat.

“If you took the grass away completely, it would be a bare-looking border,” says Phylip. But as it is, the greenness of the grass forms a perfect foil to the jewel-like blooms of peony and dark red cornflower.

Competing with the grass also keeps the vigorous tendencies of some of these plants in check, including red bistort (persicaria amplexicaulis), shown growing in Beth Chatto’s garden, above. (For more of Beth Chatto’s garden see, England’s Most Influential Gardener?). Since they are not plumped up and cossetted in a nutritious mulch, they show no signs of flopping over either.

For UK readers, a pot of Red Bistort is available for £8.99 from the Telegraph Garden Shop.

The whole garden will be scythed in late September or October. It could then be mowed a few times before Christmas so that it is ready for early spring bulbs like saffron crocus, one of the next bulbs on Phylip’s hit list.

Bulbs which are already included are camassia (above) and narcissus.

Six Camassia Bulbs are available from White Flower Farm for $19.95.

This is not the kind of garden that you want to wade in and out of just to tweak the plants here and there. So the best advice is: keep out and save yourself the trouble.

“I’m reluctant to dabble with it,” says Phylip. “I wanted to put in a load of plants and see how they interacted, without any interference from me.” He went on: “There is no such thing as a low-maintenance garden. But this is about as close as it gets.”

Steal This Look: A Charleston Pool Pavilion with an Outdoor Shower