Long-time tourists to St. Bart’s who stopped going there because of the tourists, New York-based painters Brice and Helen Marden turned their attention to a quieter island about 55 miles south. On Nevis, which they noticed has “no buildings higher than a palm tree” and no celebrities more famous than, say, the Mardens, they discovered the Golden Rock Inn more than a decade ago.

Housed in a former sugar mill since 1958, the hotel occupied a spectacular 100-acre site with stunning views of the sea, haunting views of distant mountains, and frequent views of the resident monkeys, donkeys, and goats who freely strolled the tropical grounds.

After the Mardens bought the hotel, they oversaw an extensive remodel and hired Miami-based landscape architect Raymond Jungles (whose surname is an apt description of his approach to garden design) to create a just-wild-enough garden where both guests and the monkeys would feel welcome to wander.

Photography via Golden Rock except where noted. 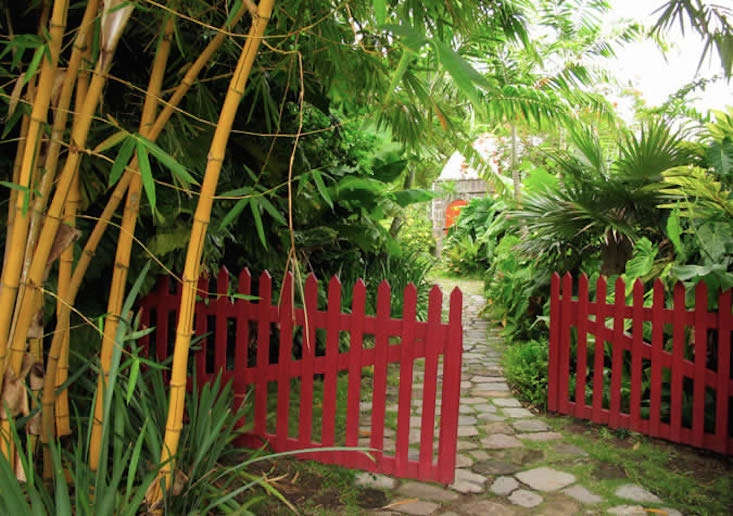 Bright red paint on the gate–and on trim throughout the resort–has a painterly effect of making the landscape’s complementary color appear even more intensely green. Helen Marden chose the color instead of a pastel shade more typically associated with Caribbean architecture because she felt its strength stood up better to the old stone on the buildings that dot the property. 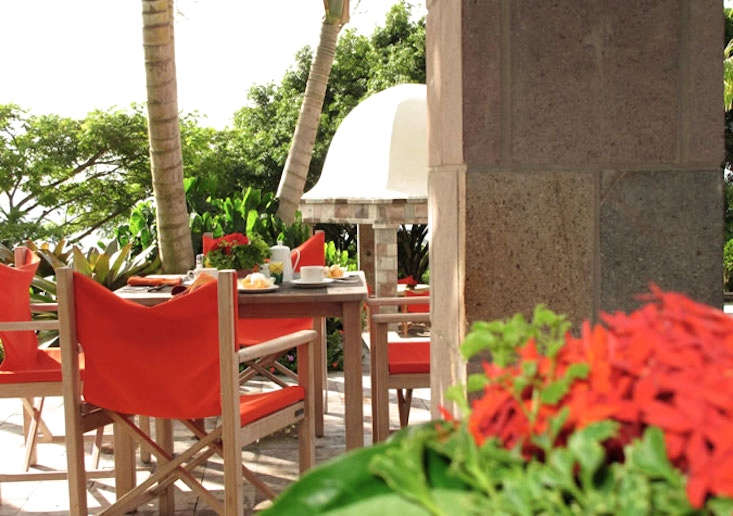 Architect Ed Tuttle designed new structural elements for the hotel, which has a 50-foot freshwater pool, complete with lily pads. 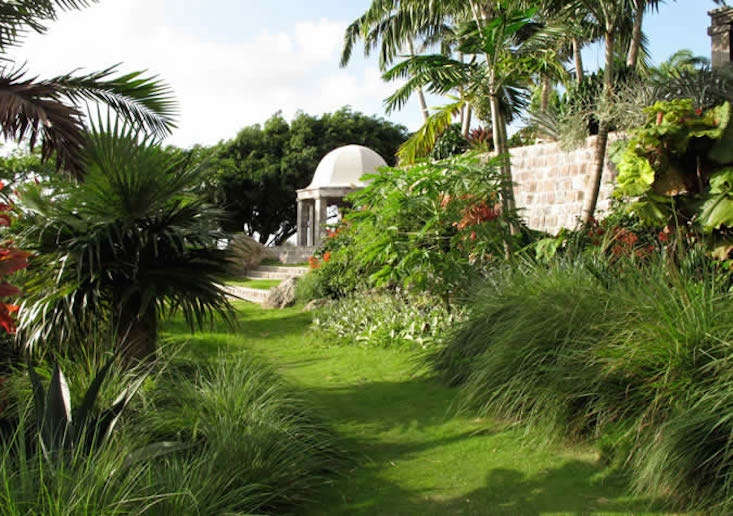 Above: Landscape architect Jungles studied the flora of the island, hiking in a nearby rainforest with a local botanist, to create a planting palette that would look entirely natural. 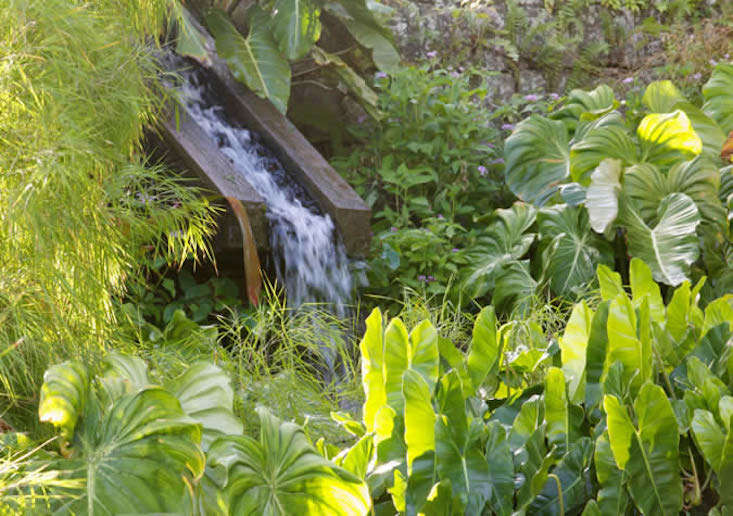 Above: The hotel sits on the slope of Nevis Peak, an inactive volcano in the center of the island. 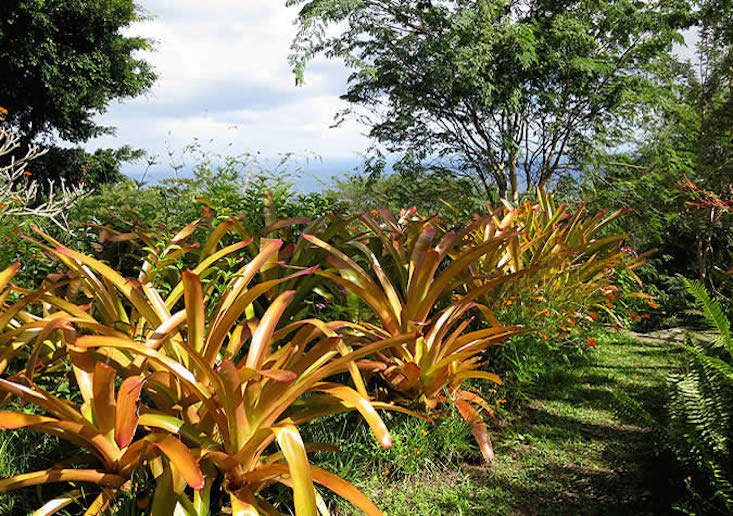 Above: About 50 inches of rain falls on Nevis every year, with driest season running from January to April. 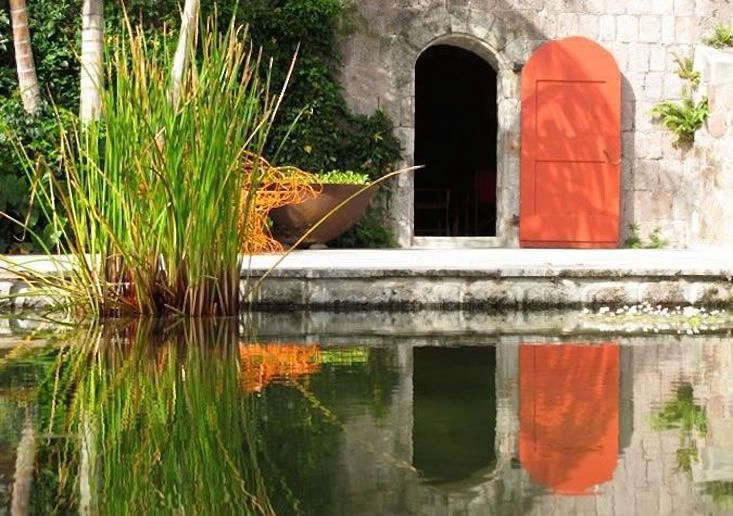 Above: Photograph via Golden Rock.

The Mardens own a second hotel in upstate New York. To read more about it, see The Artists’ Retreat: Brice and Helen Marden’s Hotel Tivoli. 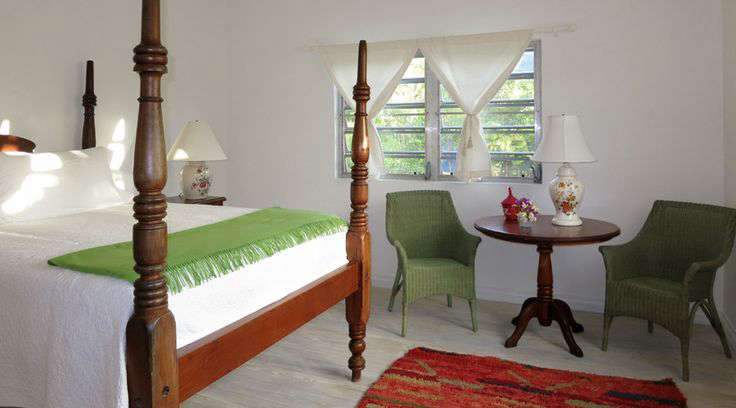 Above: Photograph via Golden Rock.

The inn has six bungalows with a total of 11 guest rooms (including a two-story suite inside a 19th-century sugar mill).

Many of the plants came from nurseries Helen Marden visited with Jungles in Miami.

For more of our favorite tropical gardens, see: