If we’ve seemed a little distracted lately, blame the kitchen garden at Walnuts Farm. It has ruined us for anything else.

Rather than daydreaming, we should be starting to think about what to make for dinner; people are going to be asking soon. But from the moment we spotted this five-acre sprawl of a garden (located about an hour’s drive from London), we knew the thing to do would be to grow dinner.

Photographs via Light Locations, except where noted. 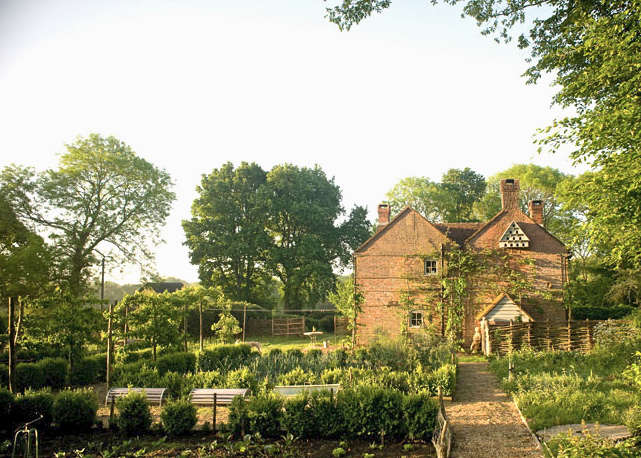 Above: We immediately pulled out graph paper and a ruler, and are sketching our own version of Walnuts Farm: with crushed gravel paths, of course, and bent-willow fences, and enough kinds of loose-leaf lettuces to take us through the salad season. Image via Walnuts Farm. 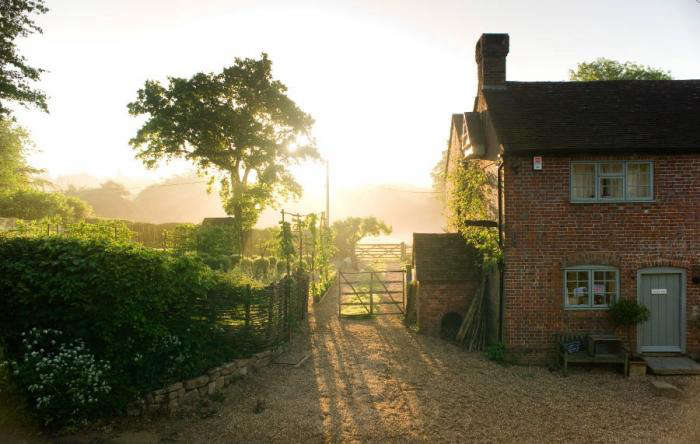 Above: Built in East Sussex about two centuries ago, the brick farmhouse is surrounded by gardens, meadows, and woodlands. 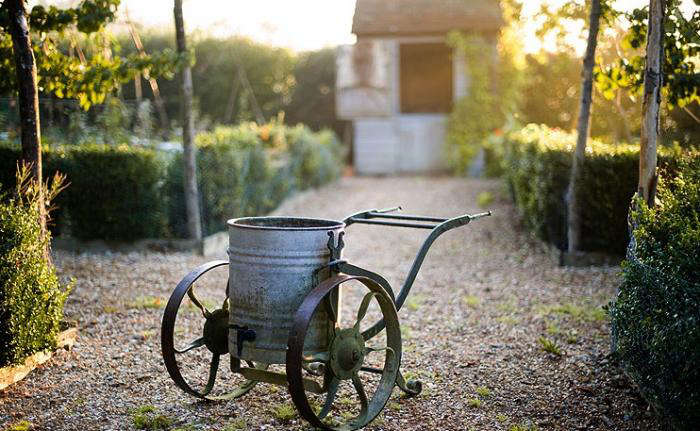 Above: A galvanized water howser isn’t as efficient as a drip irrigation system, but it’s more fun to say. We also are laying out the necessary Valves and Drip Zones, Bubblers, and Backflow Prevention Devices, as back flow is not anything we want to lie awake worrying about. (To configure: The Drip Store.) 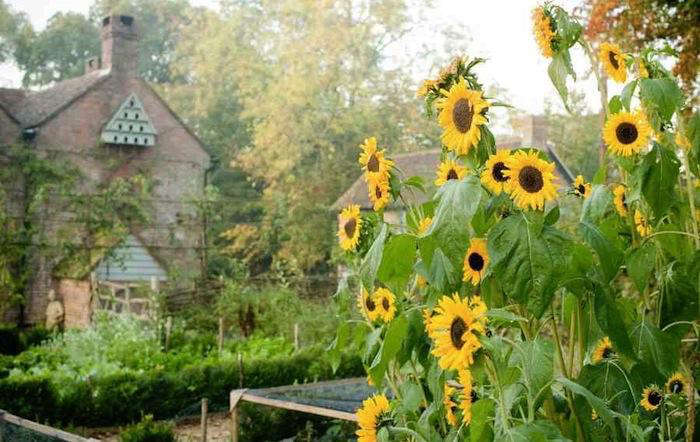 Above: With pigeonholes, a dovecote offers plenty of shelter for nesting birds to lay eggs. We have sketched in a similar bird house just below an eave (as Above). You may prefer a freestanding birdhouse. 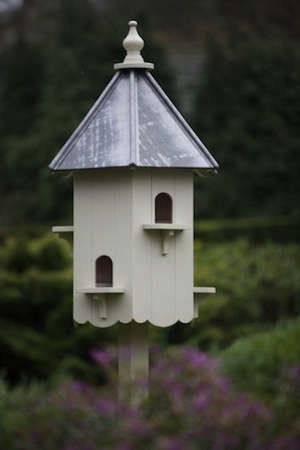 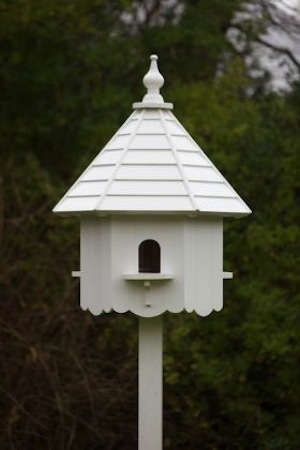 Above: The Lead Roof Buckingham Dovecote can accommodate up to six pairs of nesting doves and comes painted in Farrow & Ball’s Old White (for £675); the Milford is £395; both at Saville’s. 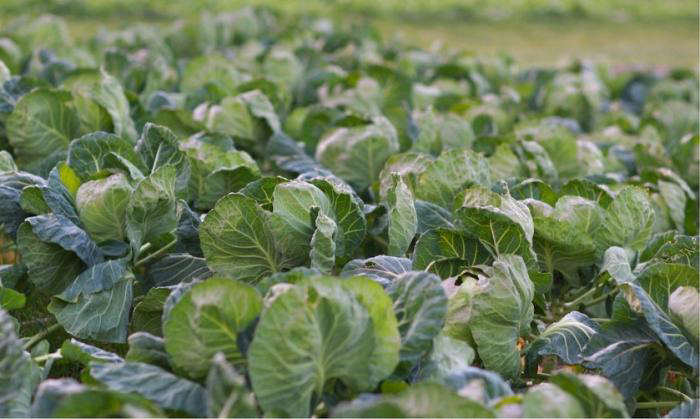 Above: We spotted these heads of cauliflower in the kitchen garden that belongs to The French Laundry in Yountville, California, where the harvest informs chef Thomas Keller’s menus. Cauliflower seeds; from $1.75 to $3 per packet, from Landreth. Image via Eat a Duck I Must. 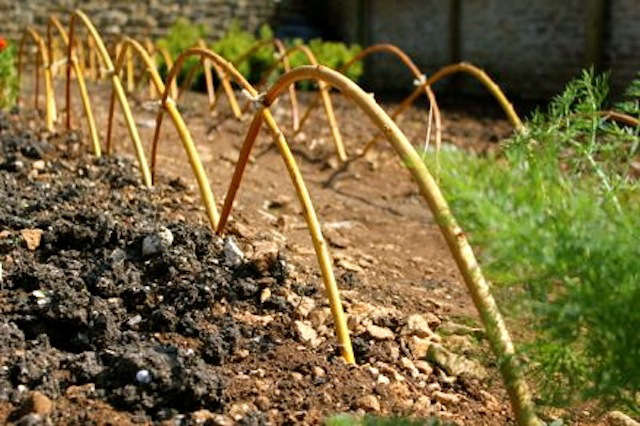 Above: Flexible willow rods, tied with twine, delineate the border between plants and paths. Many varieties and colors of Willow Rods are available from Blue Stem, for $35 per bundle of ten. Image via My Tiny Plot. 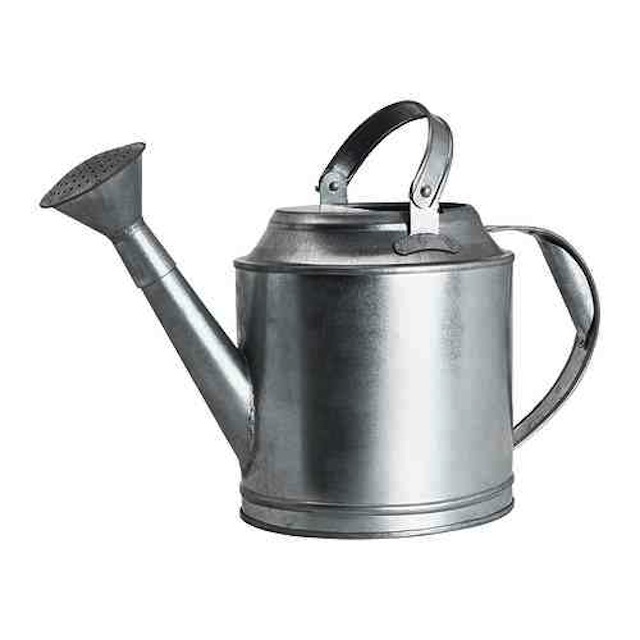 Above: Even with a drip irrigation system, there will be water emergencies. God bless you if you can find an antique howser. As a backup, there’s the Hosto watering can, via Ikea, for $9.99. 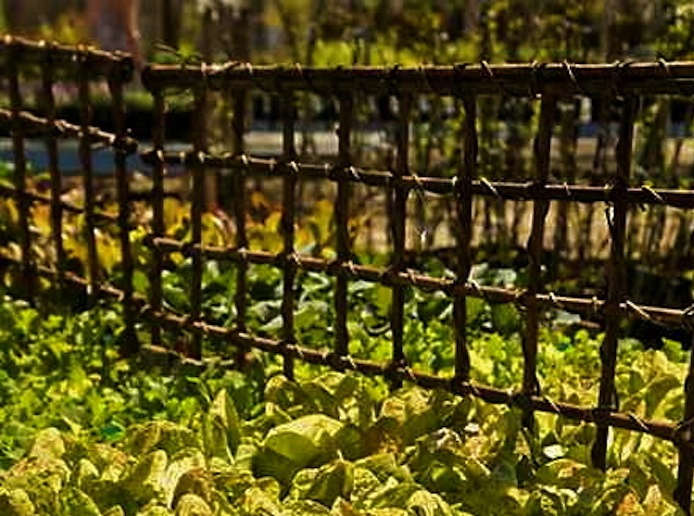 Above: Low trellises are useful for training peas…or edible nasturtiums, which we were shading in, around the time the children finally wandered into the kitchen to ask, “What’s for dinner?” Image via Terrain. 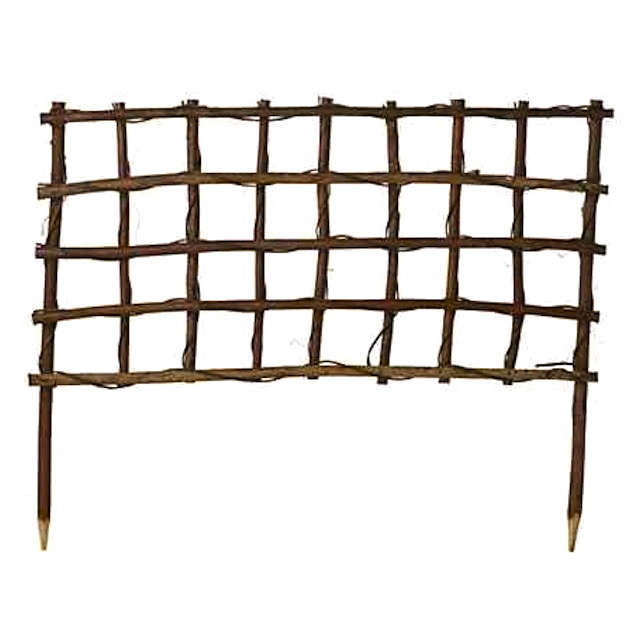 Above: Each segment of The Low Vine Trellis, $78 from Terrain, is 42 inches long. 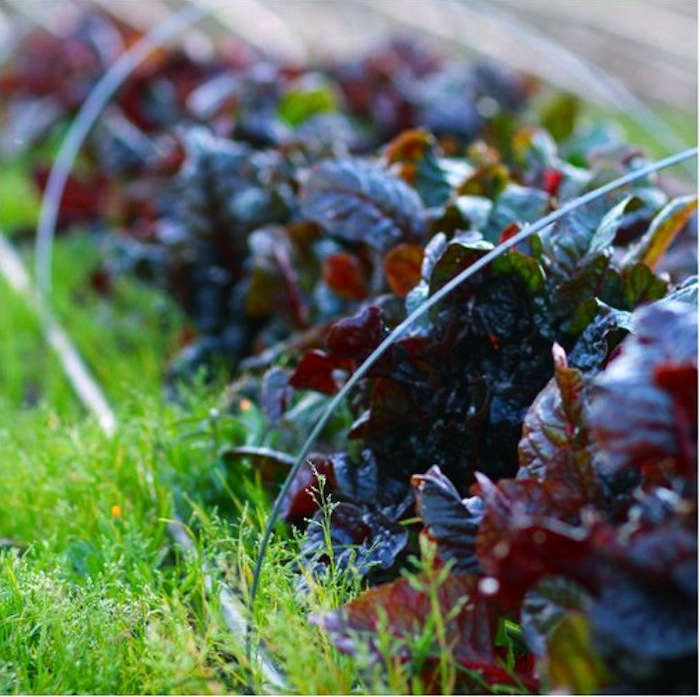 Above: “Go see what looks good in the garden,” we told the children, doodling rows of Red Velvet Lettuce ($3.50 per packet of seeds, from Landreth). Image via Eat a Duck I Must. 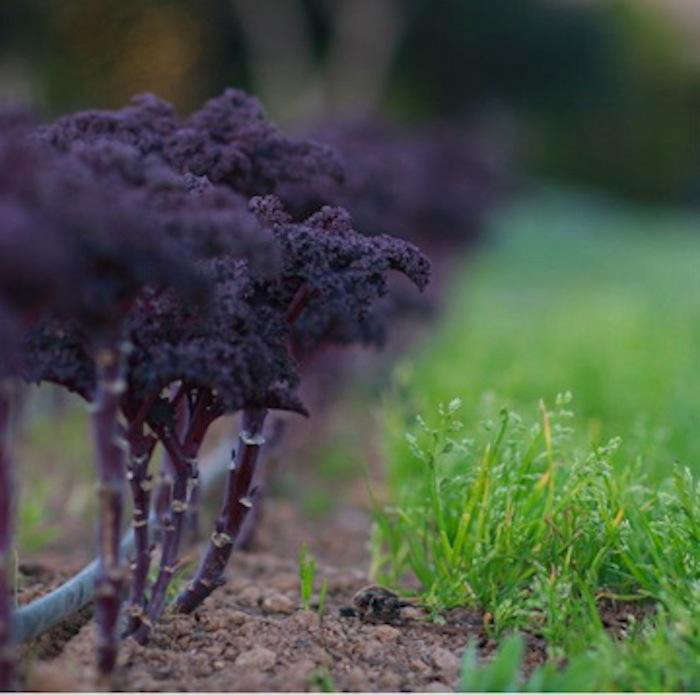 Above: Then we added purple kale, for good measure. Image via Eat a Duck I Must. (For a similar variety, consider Brassica oleracea ‘Redbor’; it’s $4.95 per packet of seeds, from Johnny’s.)

Above: Purple kale and a purple hose—what are the odds? Perhaps it’s destiny. The Heirloom Garden Hose is $58 at Terrain. 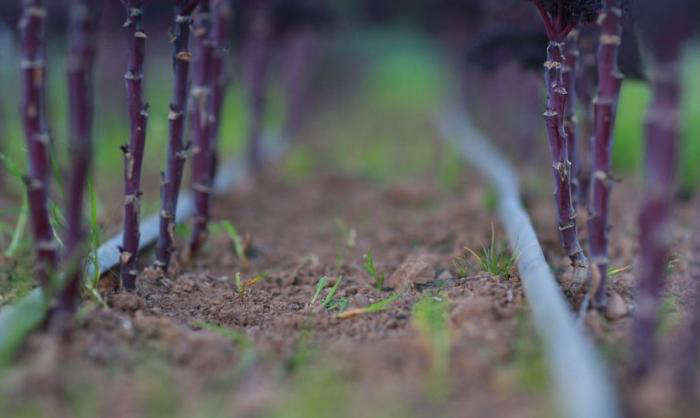 Above: A few minutes later, the children skipped back inside, carrying a basket of kale and lettuces and artichokes. Image via Eat a Duck I Must. 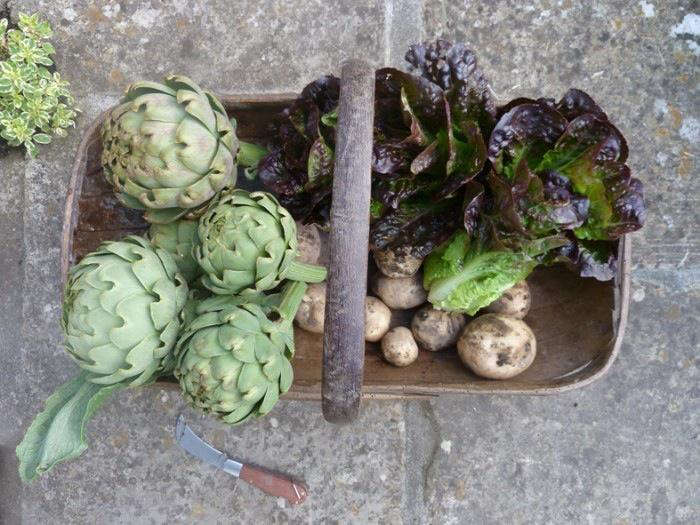 Above: “Can we have salad for dinner?” the children asked, setting down the Original Sussex Trug as gently as if this all were happening in a dream. Or a daydream. Which, we admit, it was. We sighed (there was still the question of dinner looming), and put away the graph paper. Image via Ben Pentreath. 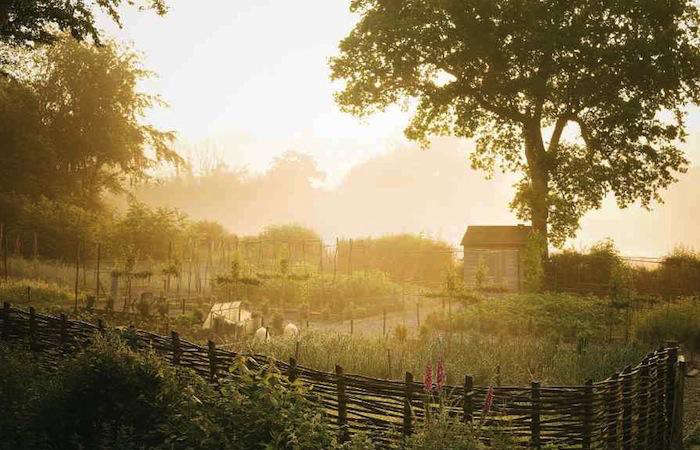 Above: And as the sun set on Walnuts Farm, we walked to the refrigerator, stood at the open door—falling into another sort of trance altogether—and wondered: Would it even be possible to train children to like purple kale?

10 Essential Insects You Need in the Garden