Netherton Foundry in Shropshire may be a relative startup (it was founded by Neil and Sue Currie in 2011) but the iron heritage of this area of the north midlands of England is centuries old. The family-owned business, which specializes in beautifully crafted cookware, is just a short drive from Ironbridge—the site where the world’s first iron bridge was completed in 1871. At Netherton they refer to the area as “the 18th century’s Silicon Valley.”

They have a point; the region was the heart of the iron and coal industries that fuelled the sweeping technological advances that would transform society in England, Europe, and beyond. And at Netherton Foundry, that heritage lives on—albeit on a much smaller scale. The cast and spun iron pots, pans, and kettles are as functional as they are beautiful and, thanks to their sturdy construction, they are perfect for cooking in the great outdoors too. 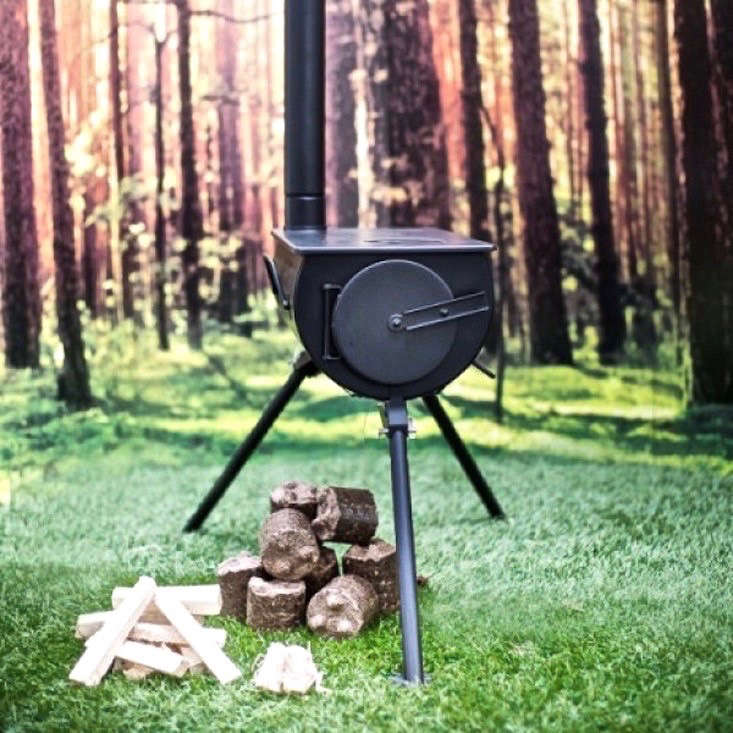 Above: A portable log-burner, the Frontier Stove is £162 plus shipping costs.

The brilliantly conceived Frontier Stove has its own flue and sturdy tripod stand that is ten times more efficient than an open fire. The stove, which is made in Cornwall and was originally designed for use in disaster zones, has a flue that draws toxic fumes away from whoever is cooking. Pans can stand on a hot plate or be placed on open flames.

The stove can also be used to heat yurts, cabins, or tents if used in conjunction with a special Frontier Stove Tent Flashing Kit (£52). 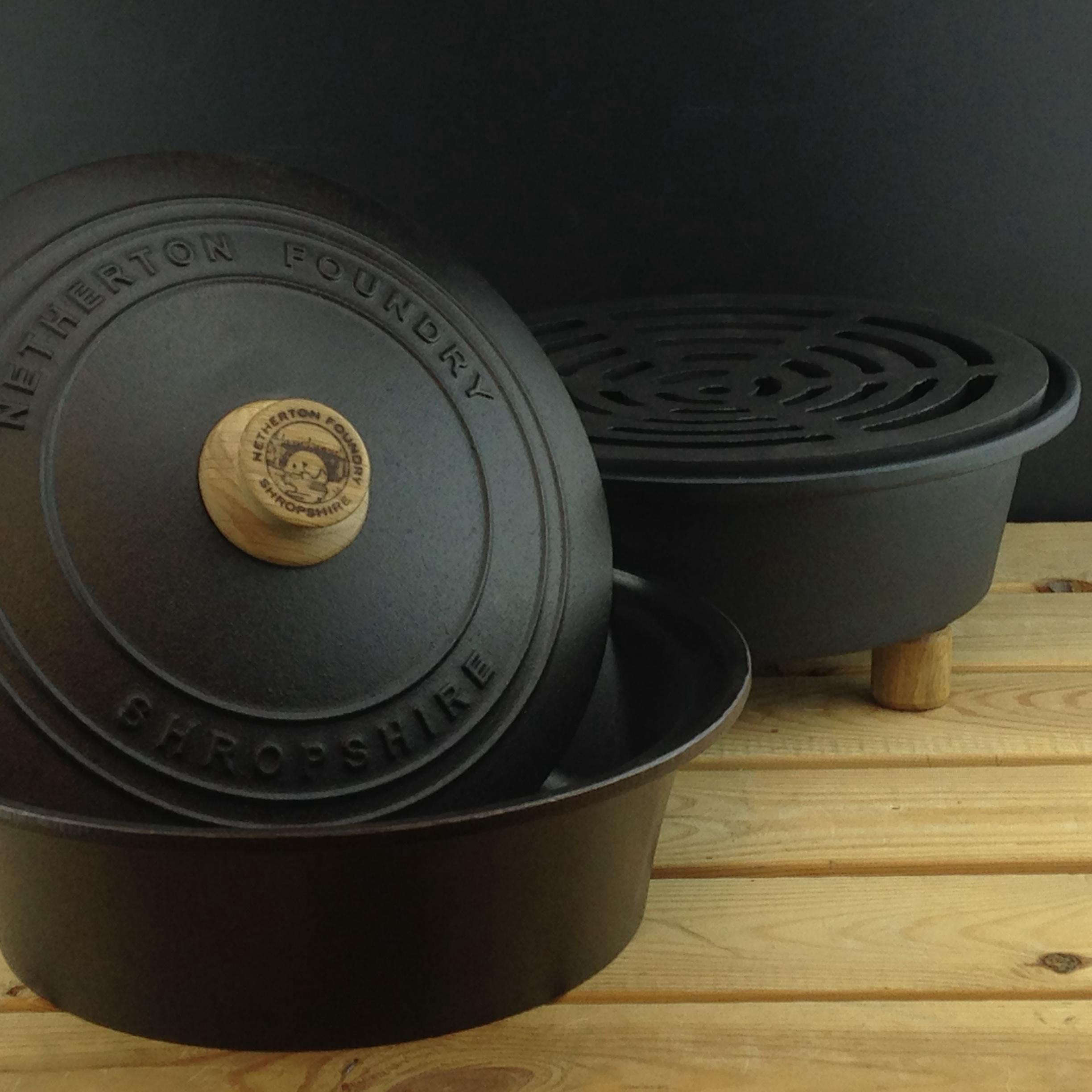 The Cast Iron Outdoor/Garden Hob is fueled with charcoal and will cook food for up to four hours, and used in conjunction with the Slow Cooker (£180 for both) it will keep it warm for many hours after that. It has oak feet so it can be used on decking or a patio. 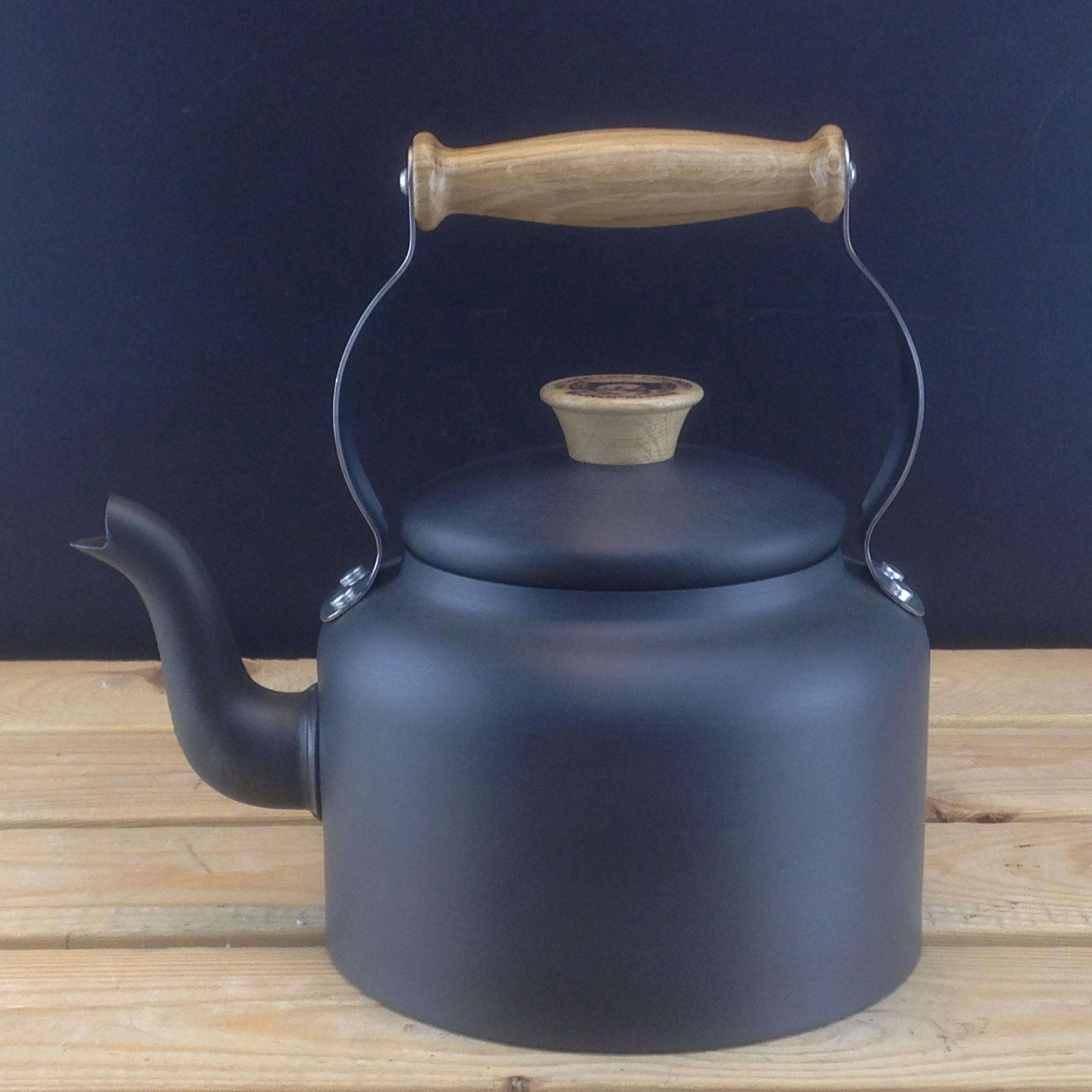 The company tries to make the majority of its products using locally sourced materials and craftspeople. The iron is cast in nearby Dudley, the handles for kettles and pans and knobs and feet are all made from oak sourced in a local coppice woodland in the Wyre forest. Even the company’s ceramic tagine lids (which sit on an iron casserole) are thrown by potter Rachel Frost, who is based in the Ironbridge Gorge. 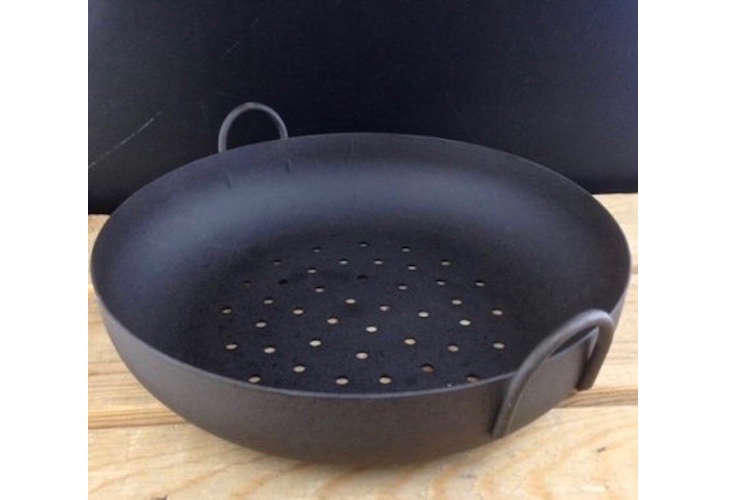 Above: A 10-inch spun iron Chestnut Roaster (£70) can be used on an open fire, barbecue, or fire pit. Spun iron is around half the weight of cast iron and is also used for the company’s frying pans, woks, and some saucepans. 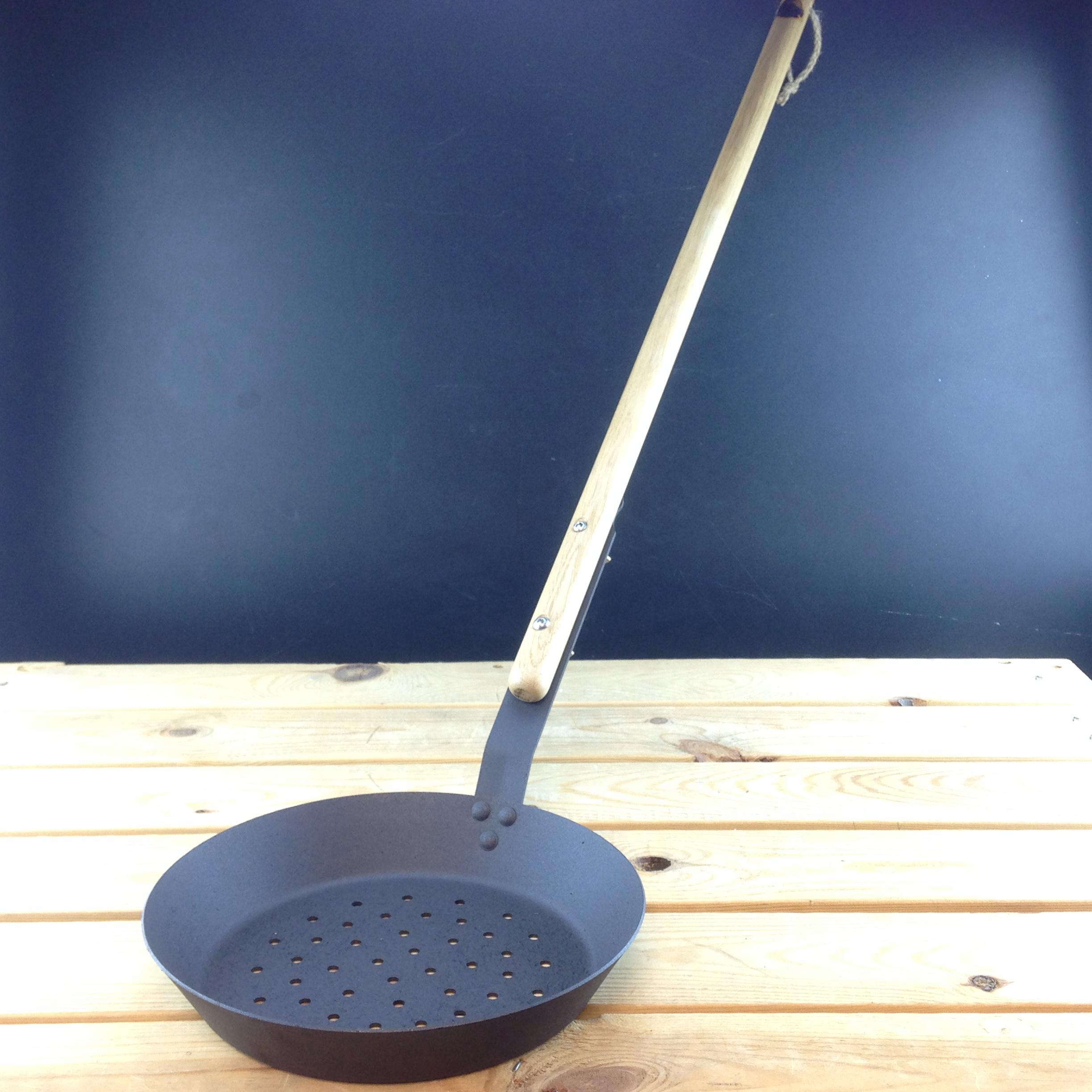 Above: A very long handle on a 10-inch Chestnut Roasting Pan (£70) means you can keep your distance from a smoky, hot camp fire. 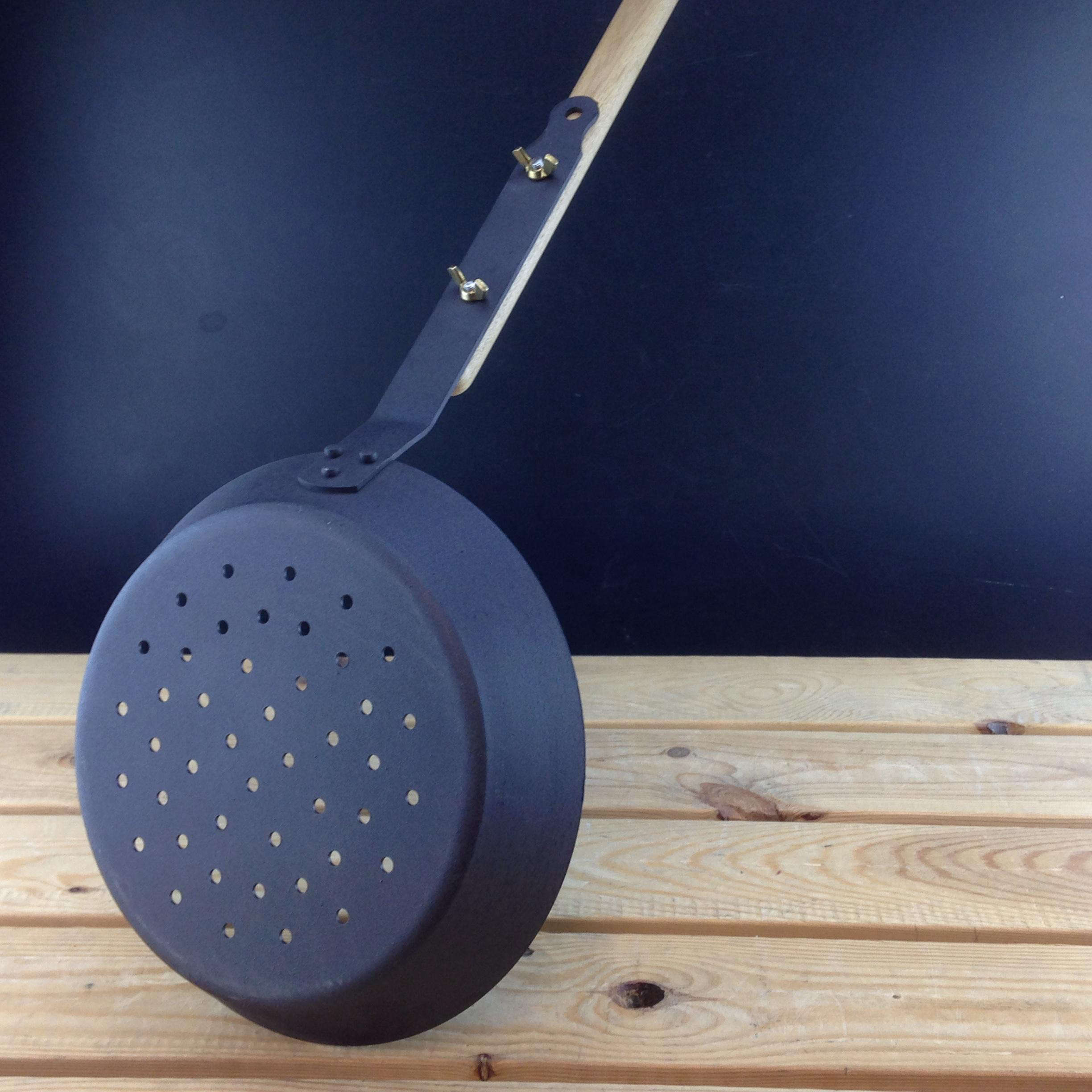 Above: As any users of cast iron pans will know, these pots have brilliant conductivity and heat retention. There’s no coating on the Netherton Foundry pans, each one is pre-seasoned using flax oil. During during the life of the pan this process (which creates a natural non-stick barrier) can easily be repeated at home. Wooden handles are attached with simple rivets and can be removed for cleaning (or if you prefer to use the pans with a metal handle).

For more ideas for an open-air feast, see 10 Easy Pieces: Open Fire Cook Stoves and Into the Wild: A Canadian Thanksgiving.

A Quebec Cabin for a Carpenter, Courtesy of Atelier L’Abri

Outbuilding of the Week: A Backyard Writer’s Shed by Weston Surman & Deane