Pelham Bay Park in the Bronx is the largest park in New York City. It was a favorite dumping ground for dead bodies in the late 1980s and 1990s. And it is home to the richest collection of indigenous wildflowers in the city of 8.4 million.

Visiting this wooded shoreline on the quiet waters of the Long Island Sound is like a trip into the past, a glimpse of what this most populous of cities may have looked like before it was flattened and choked by the urban grid. It is one of New York’s best botanical secrets.

The plants growing in the woods and beside the water here are lessons in local ecology and sustainability; natives and invasive plants co-exist, with indigenous populations of spring ephemerals increasingly vulnerable to noxious invasives (a USDA classification) such as Japanese knotweed, day lilies, garlic mustard, mugwort, and field garlic (all edible, which is handy for foragers), and more.

Whether you drive, or travel by subway and bus, head for Hunter Island, in the northeastern part of the park, north of Orchard Beach. For an hour or four, this will be your woodland hideaway.

Here is our spring tour of Hunter Island, March through May: 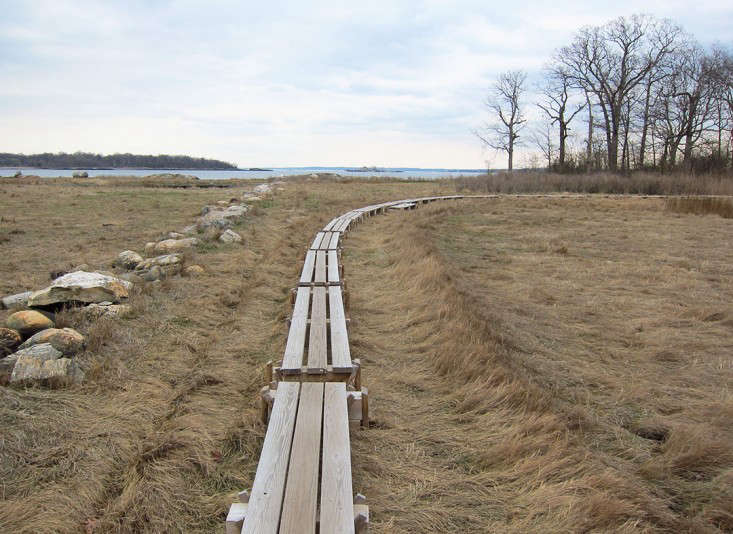 Above: Early spring beside the water looks a pale, washed out fall. The salt marsh cordgrass lies flattened like wet fur. 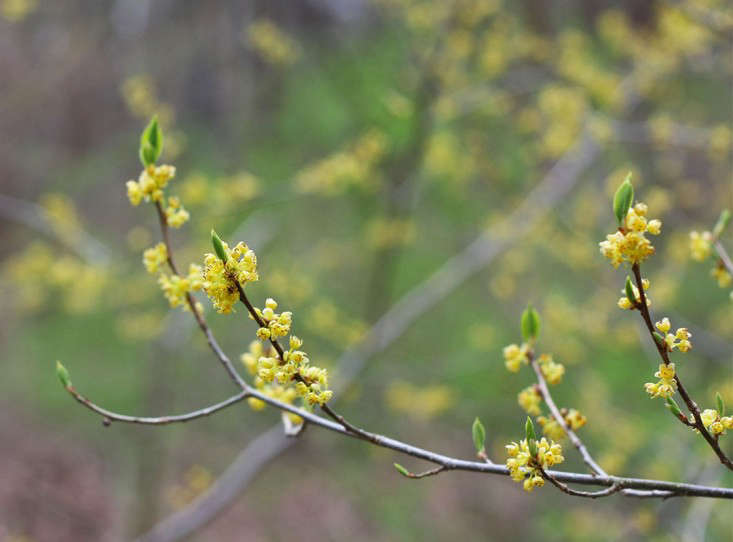 Above: In the woods the lemony branches of spicebush (Lindera benzoin) are the first to show signs of spring life. 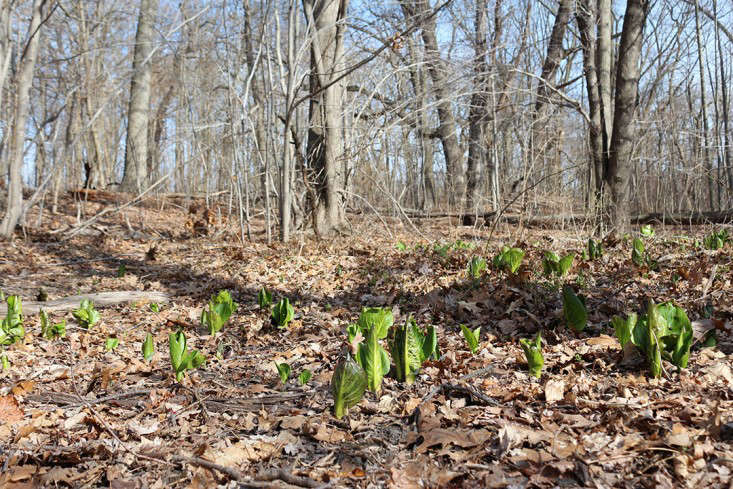 Above: In damp spots eastern skunk cabbage (Symplocarpus foetidus) squeezes from the cold soil. It is a thermogenic plant – its flower spathe generates heat to melt snow and ward off the freezing temperatures that still occur in March. And yes, it smells bad, in order to attract the flies and beetles that pollinate it. The wide, lime green leaves follow. 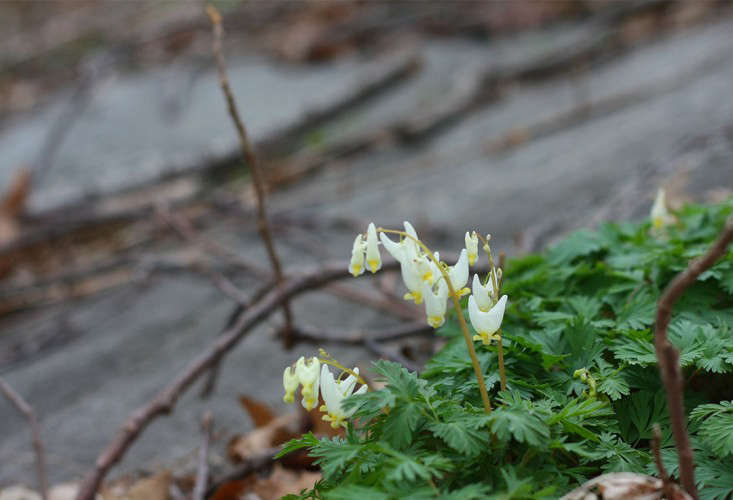 Above: Late in March Dutchman’s breeches (Dicentra cucullaria) begin to appear, like miniature pants pegged on a bowed washing line. By the time summer arrives, they will have disappeared, again. 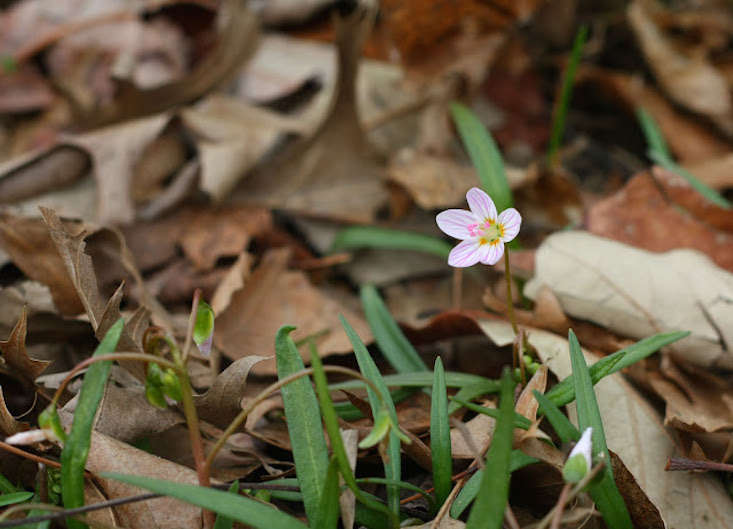 Above: As the weather warms, the flowers of spring beauty (Claytonia virginica) crowd the short grass in open spaces. The translucent and striped flowers follow the sun. 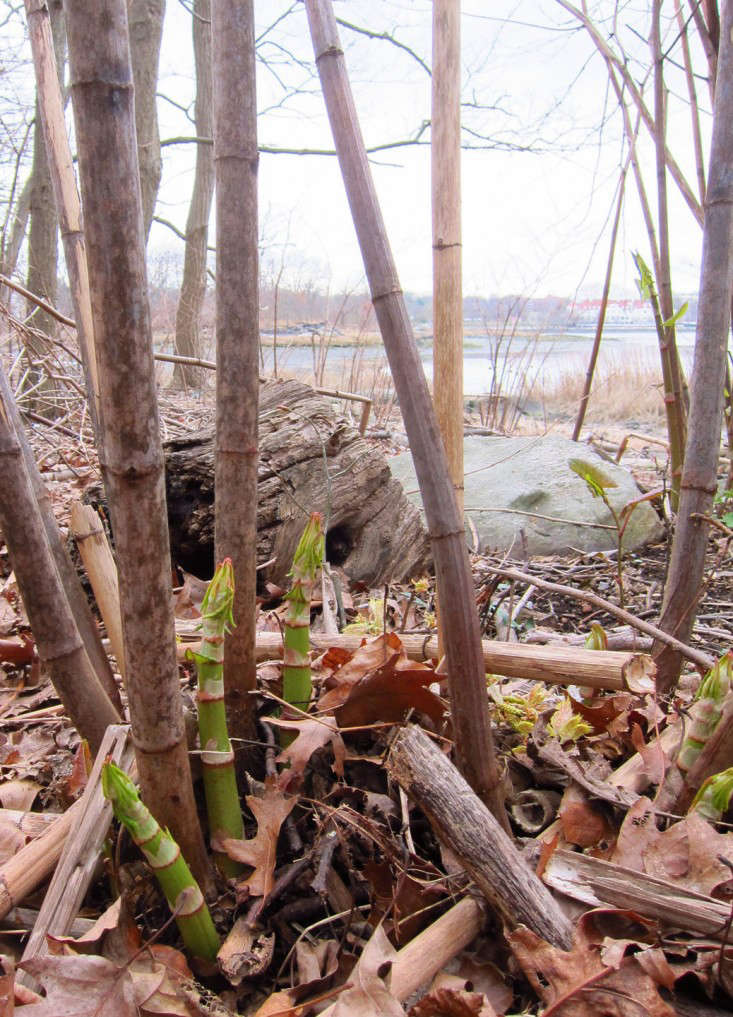 Above: Japanese knotweed (Polygonum cuspidatum) begins to emerge. The weed is prolific and exceptionally hard to eradicate. The shoots are edible. If you collect them, you will be contributing to the plant’s mechanical control. Be sure to look for the previous season’s dry hollow stalks; their absence indicates the use of glyphosates—Roundup— the previous season. The fat young shoots look like asparagus, but are tart like French sorrel (in our next Weeds You Can Eat piece we’ll talk more about this invader). 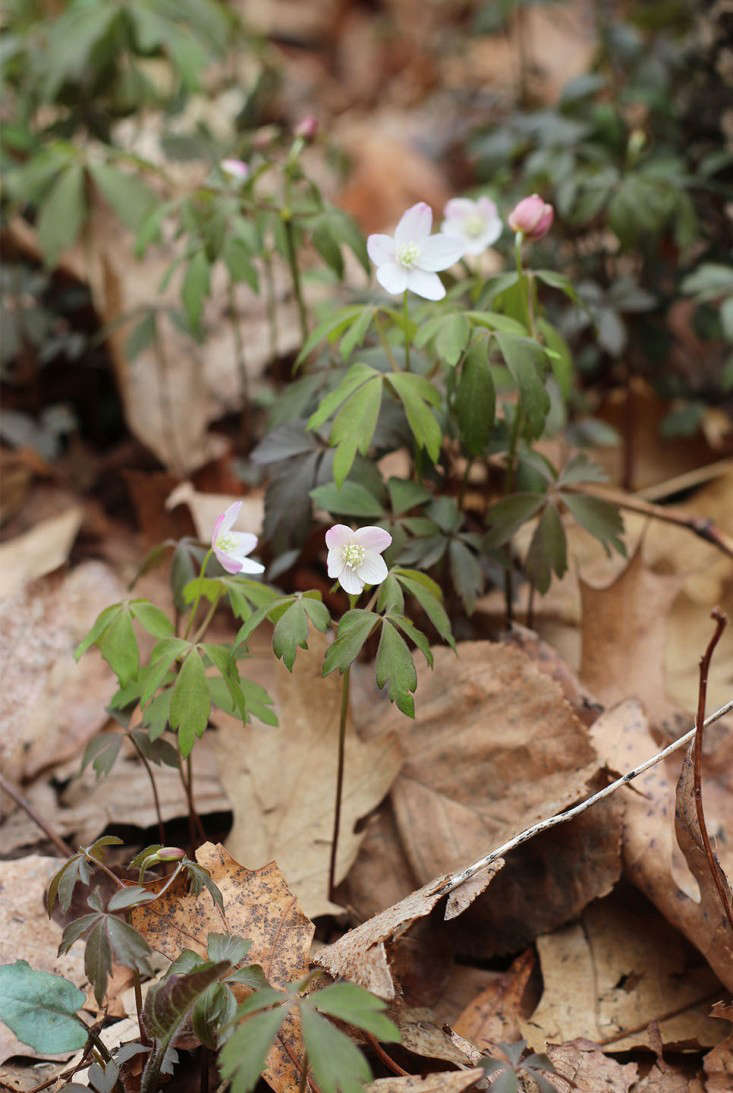 Above: Delicate wood anemones (Anemone quinquefolia) stand no long-term chance against the thuggish progress of plants like Japanese knotweed, or the army of day lilies (Hemerocallis fulva) on the forest floor. 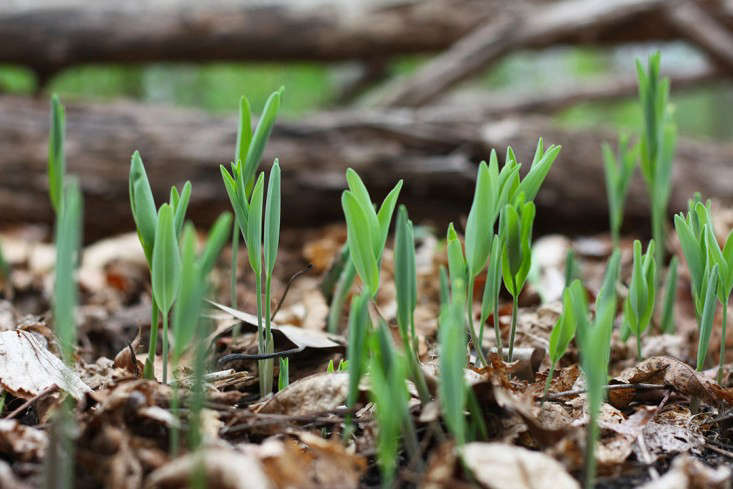 Above: Low on the leaf litter are the earliest shoots of native Solomon’s Seal, Polygonatum biflorum. 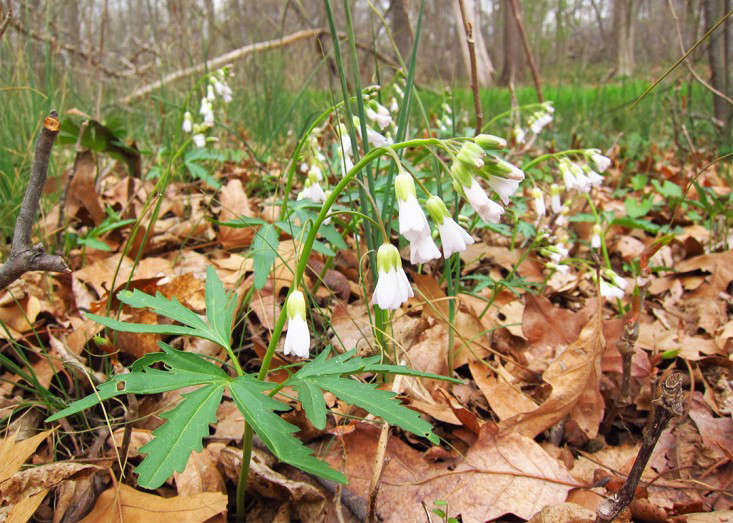 Above: The pretty flowers of cutleaf toothwort (Cardamine concatenata) grow in drifts beneath the still-bare deciduous trees. 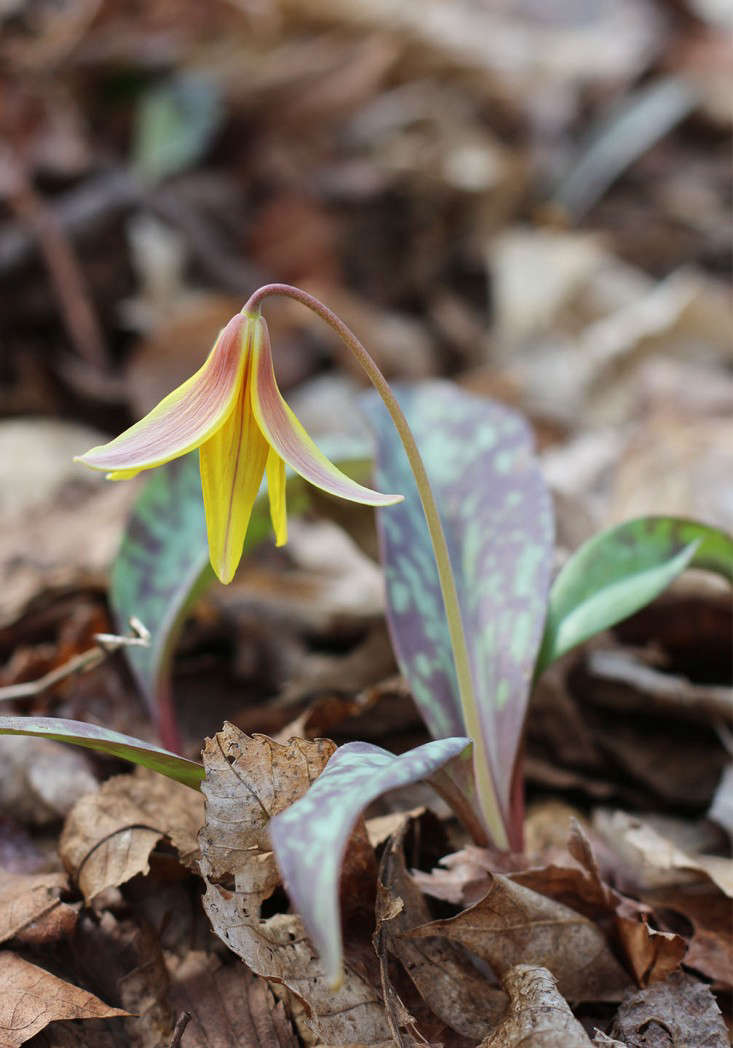 Above: If you are lucky enough to hit the right week in April, you may find thousands of trout lilies (Erythornium americanum) in bloom. 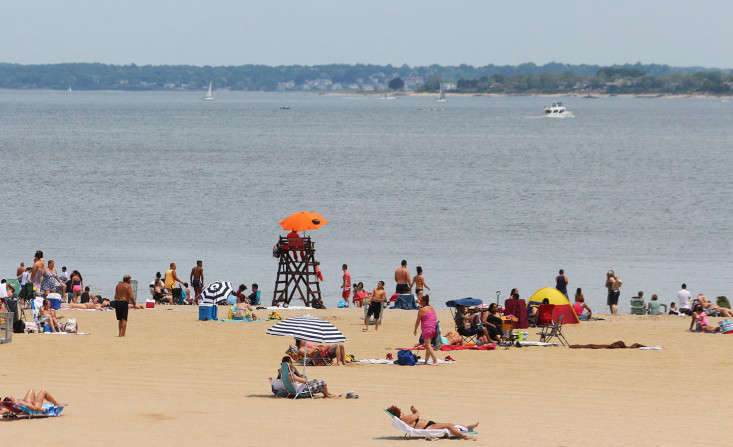 Above: By May, Orchard Beach has begun to unpack itself. There are boom boxes, there is salsa, and there are unclad bodies of every proportion. There are sprawling, multifamily picnics emerging from plastic bags and foil trays and there are dozens of portable barbecues. 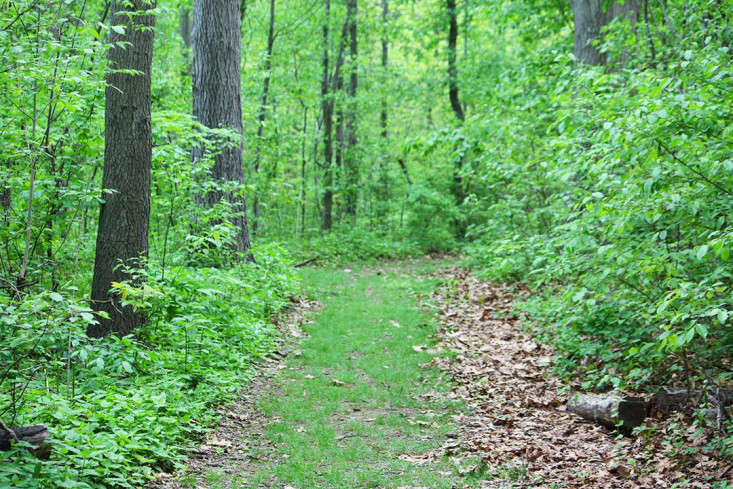 Above: Hightail it to the cool woods. Chances are good you’ll see no one else. 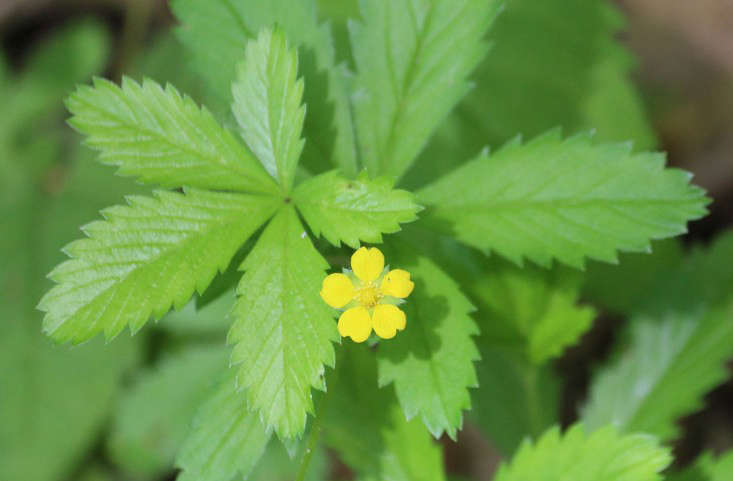 Above: Common cinquefoil (Potentilla simplex), masquerades as the barren strawberry, with which it is often confused. 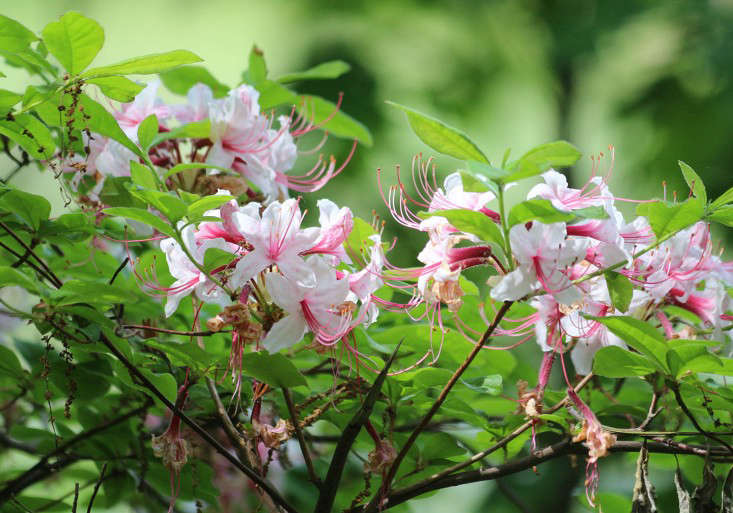 Above: Native pinxter azaleas (Rhododendron canescens) are in bloom. 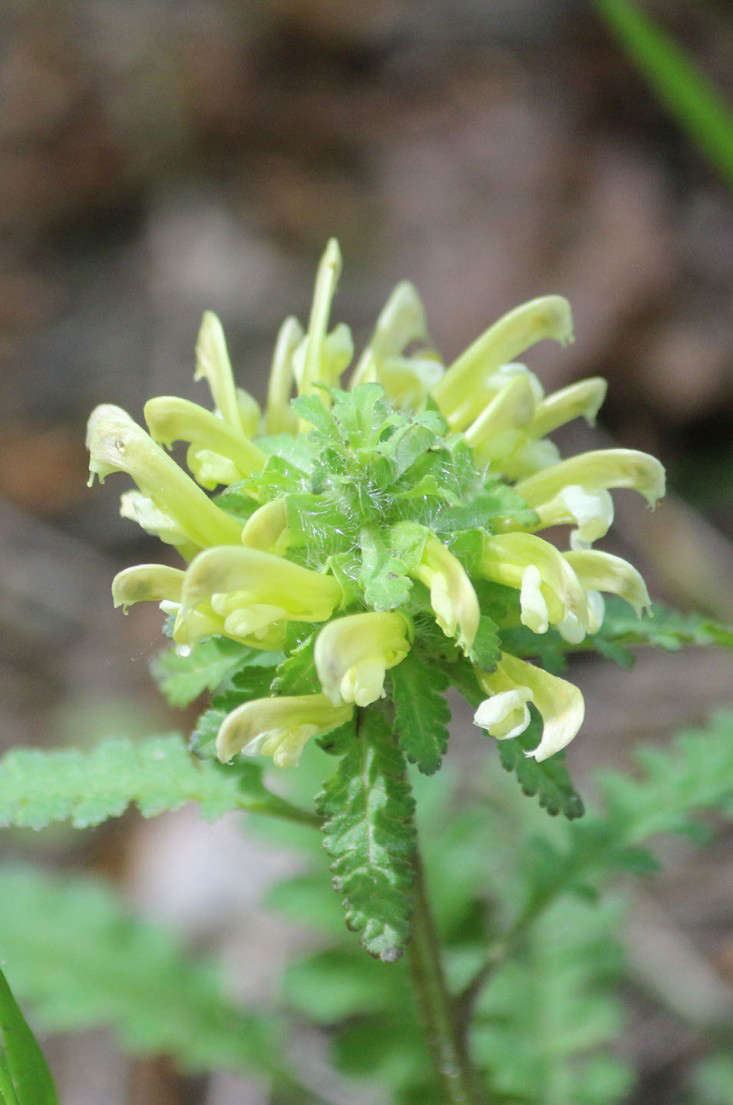 Above: Wood betony, Pedicularis canadensis, is a rare sight in the city. It carpets the forest floor in just one area for a couple of dozen feet. 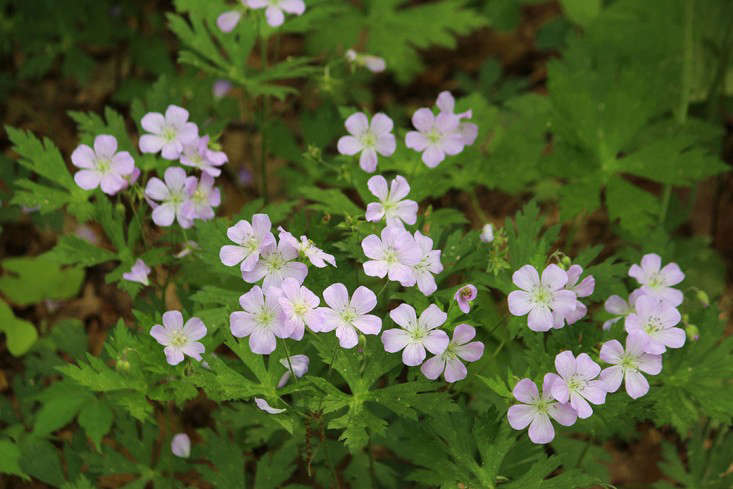 Above: There are path-side clouds of Geranium maculatum. 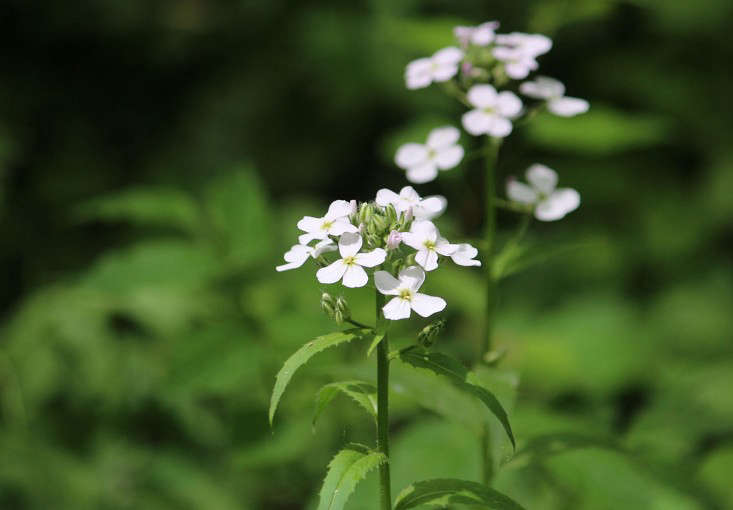 Above: Dame’s rocket (Hesperis matronalis), grows in dappled sunlight. While it behaves and looks a little like garden phlox, its four petals indicate that it belongs to the mustard family. So, edible. 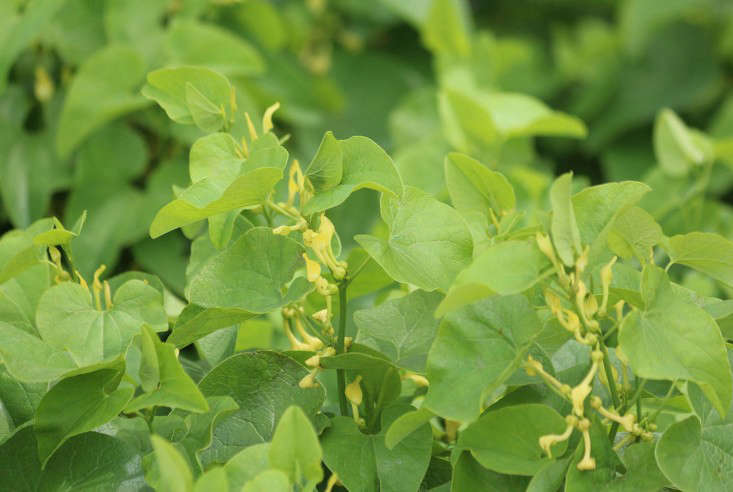 Above: Growing in sheets down to the water is birthwort, the European invasive

Aristolochia clematitis (related to the vast climbing vine, Dutchman’s pipe), responsible, apparently, for kidney failure and urinary tract cancers down the ages, in those who consumed it as a medicinal herb: it contains aristolochic acid. 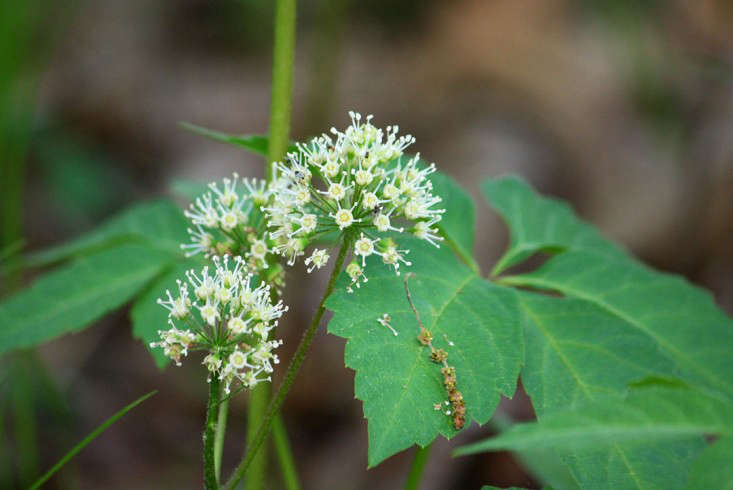 Above: Wild sarsaparilla (Aralia nudicaulis) is easily recognized in late summer when its flowers have become glossy black clusters of fruit. Its leaves are sometimes mistaken for poison ivy. 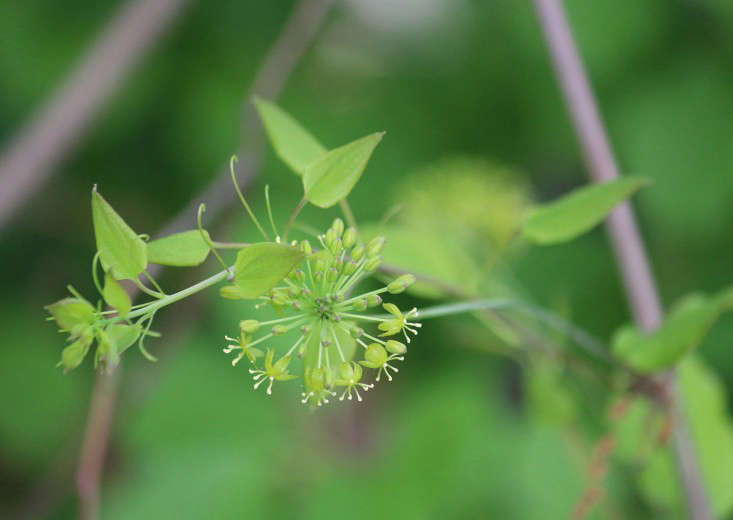 Above: The starburst flowers distinguish the indigenous twiner Smilax herbacea, from its cousin, Smilax rotundifolia (below) – by summer these greenbrairs become harder to tell apart. 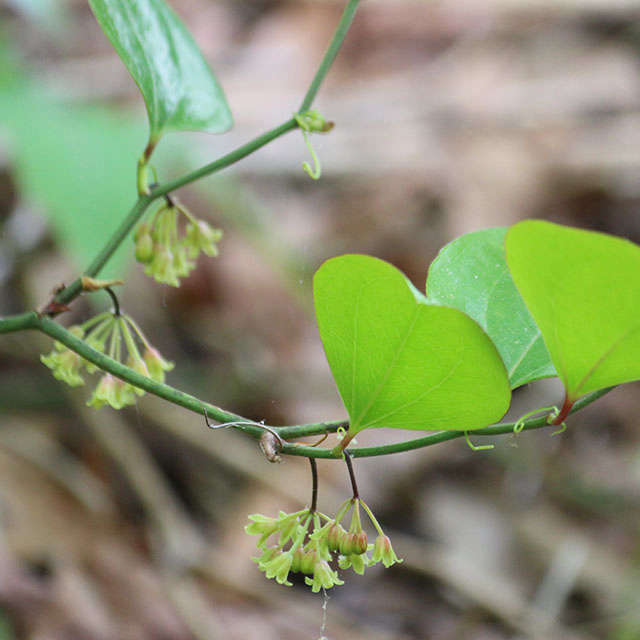 Above: The young, growing tips of both Smilax vines are edible and taste a little like grape tendrils. 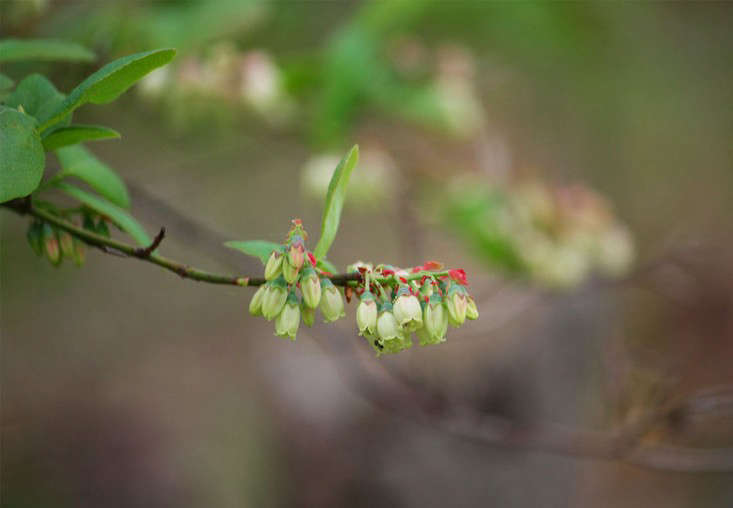 Above: The tiny bell flowers of wild blueberries (Vaccinium species) open on wiry shrubs scattered beneath the trees. 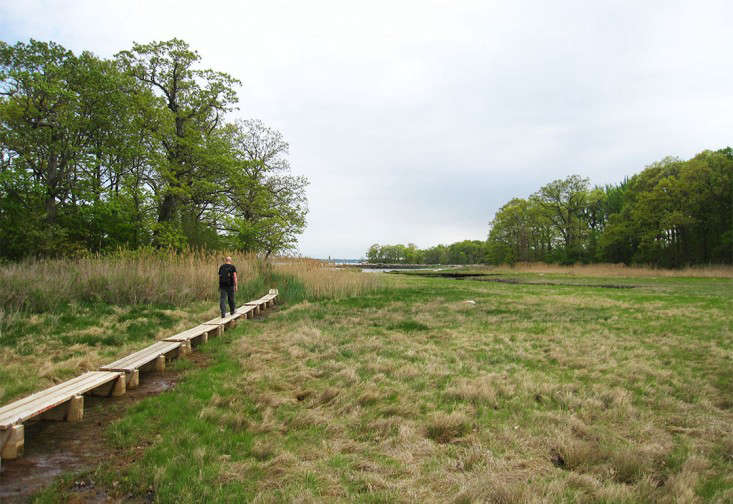 Above: The swale of the salt marshes is beginning to green, and the island’s trees leaf out. Sit on a rock over the water of the Long Island Sound to enjoy your picnic. You will be kept company by the cries of hysterical oyster catchers and the aerial entertainment of gulls dropping shellfish onto the rocks to shatter them for their own lunch. 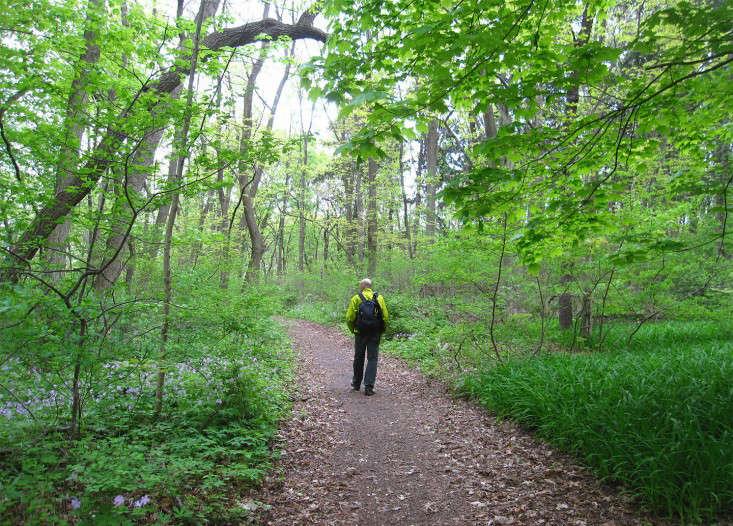 Above: Leaving the May woods is hard, but it is with an infusion of natural beauty which few city residents know is waiting for them.

It’s spring: time to catch the 6 train uptown, to the end of the line, then hop a bus. It is worth the ride.

For directions to get there, see NYC Parks.

For more of our favorite spring hikes, see The Road Not Taken: Robert Frost’s Daffodils in Gloucestershire and Texas Treasure: Where to Find the Bluebonnets.

The Novice Gardener: Is It Safe to Eat Food Grown with Urban Water?

Required Reading: Meadows at Great Dixter and Beyond