In June Bililies opened a second Souvla location in SF’s NoPa neighborhood. We like the interiors—heavily inspired by the first location (see Restaurant Alert: Souvla in San Francisco on Remodelista) but with more greenery. But we particularly love the outdoor patio, where a backyard dining table has a stylish built-in trough to keep wine bottles on ice. 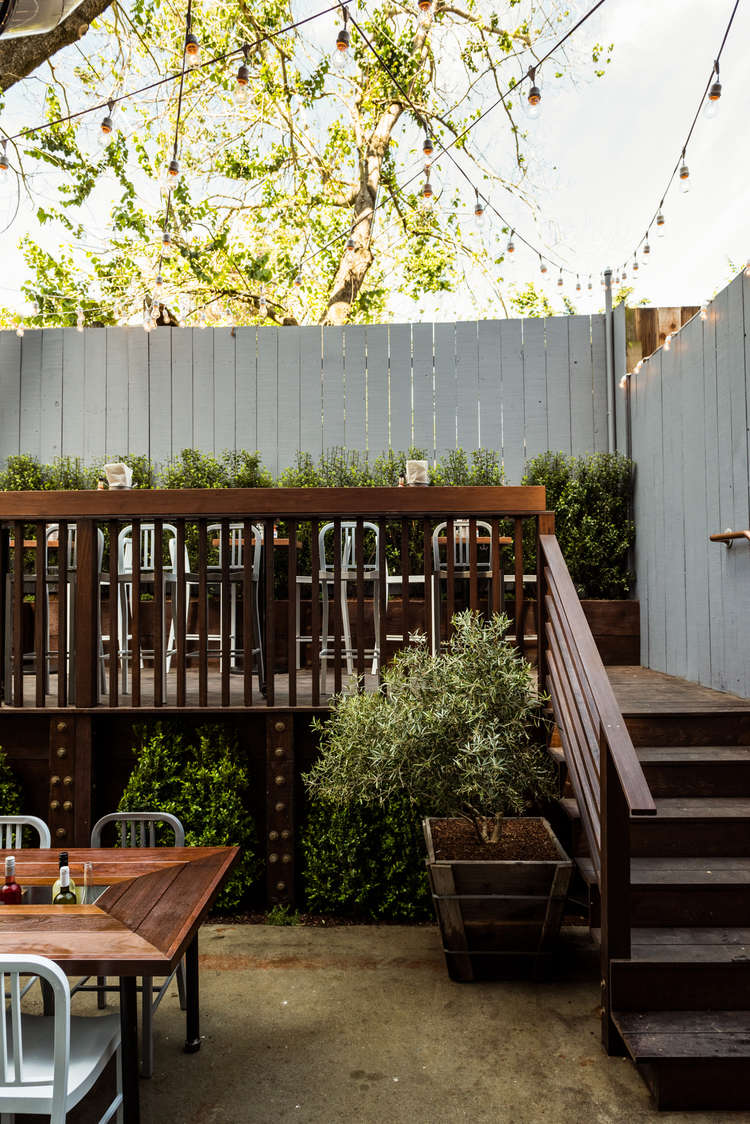 Above: The backyard and ipe wood patio already were in place when Souvla moved in, so the team cleaned up the wood and made some modest modifications—such as adding a copper rail along the stairs and painting the back fence in dusty Shadow Gray from Benjamin Moore.

But the real transformation happened when the boxwood and olive landscape by culinary gardener Tucker Taylor moved in. (Taylor and Bililies worked together at the Michelin-starred French Laundry, Taylor as gardener and Bililies as culinary assistant to chef Thomas Keller). 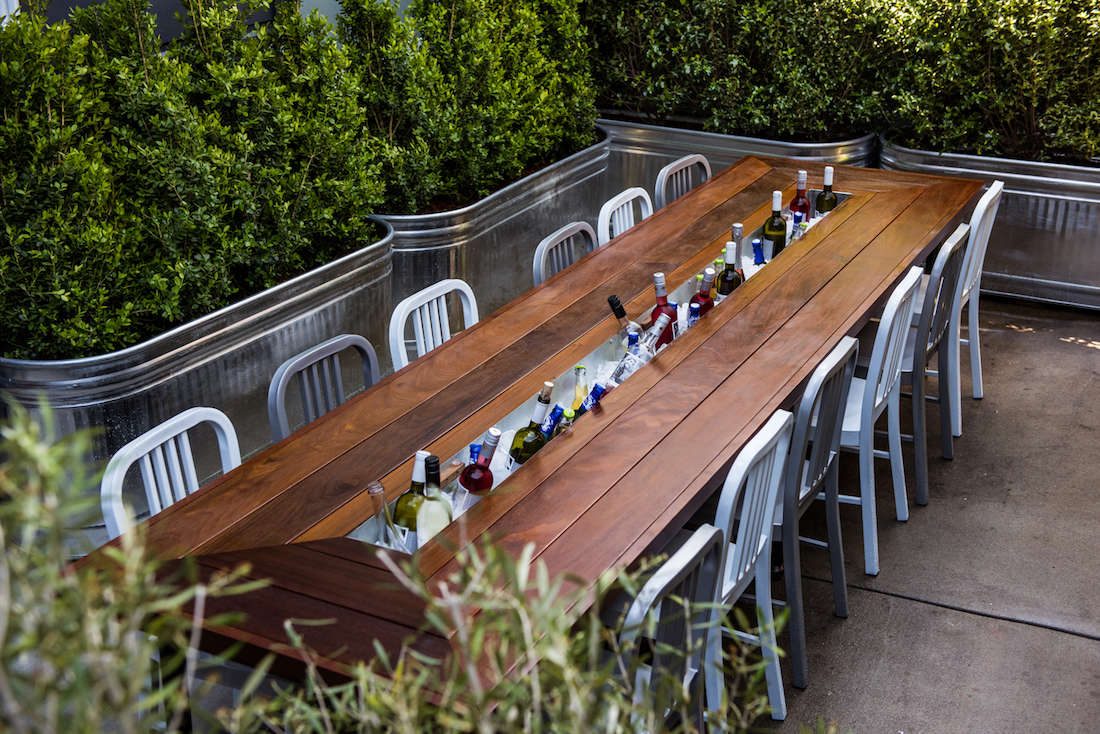 Above: The star of the patio is undoubtedly the 14-seat wine cooler table, designed by the restaurant’s general contractor, Pacific Rim Design+Build, and fabricated with help from Brown Dirt Cowboys in nearby Oakland. 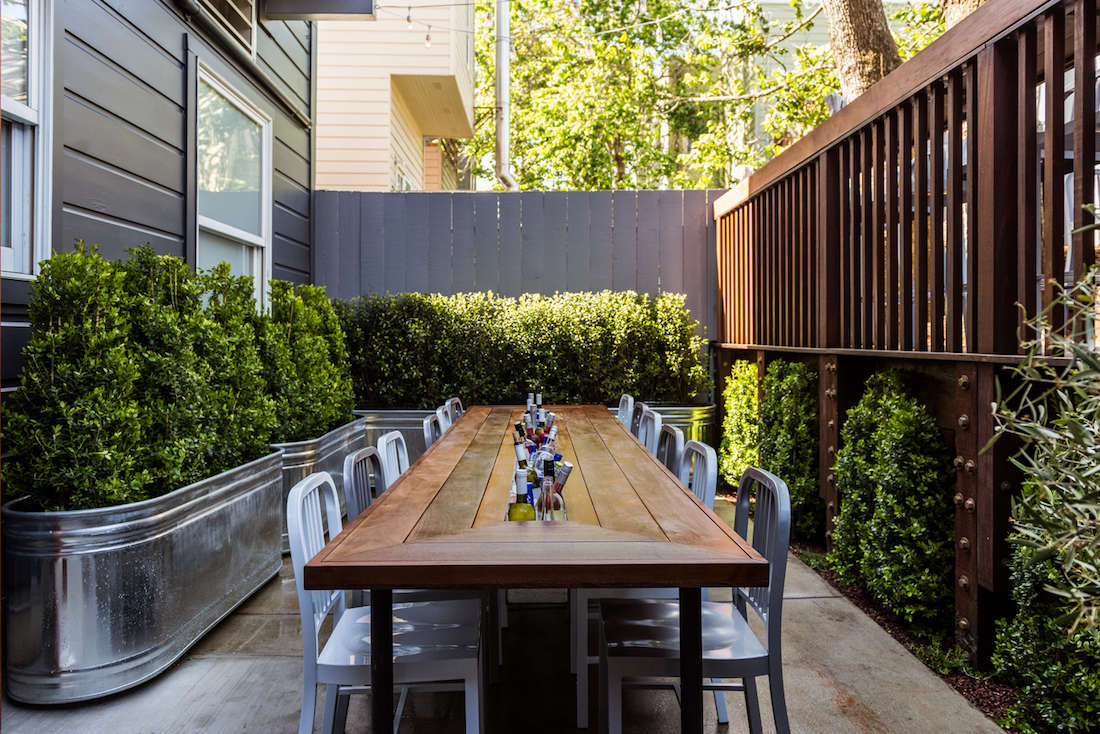 Above: All of the landscaping, including the boxwood in oversized metal troughs, is on a drip irrigation system. 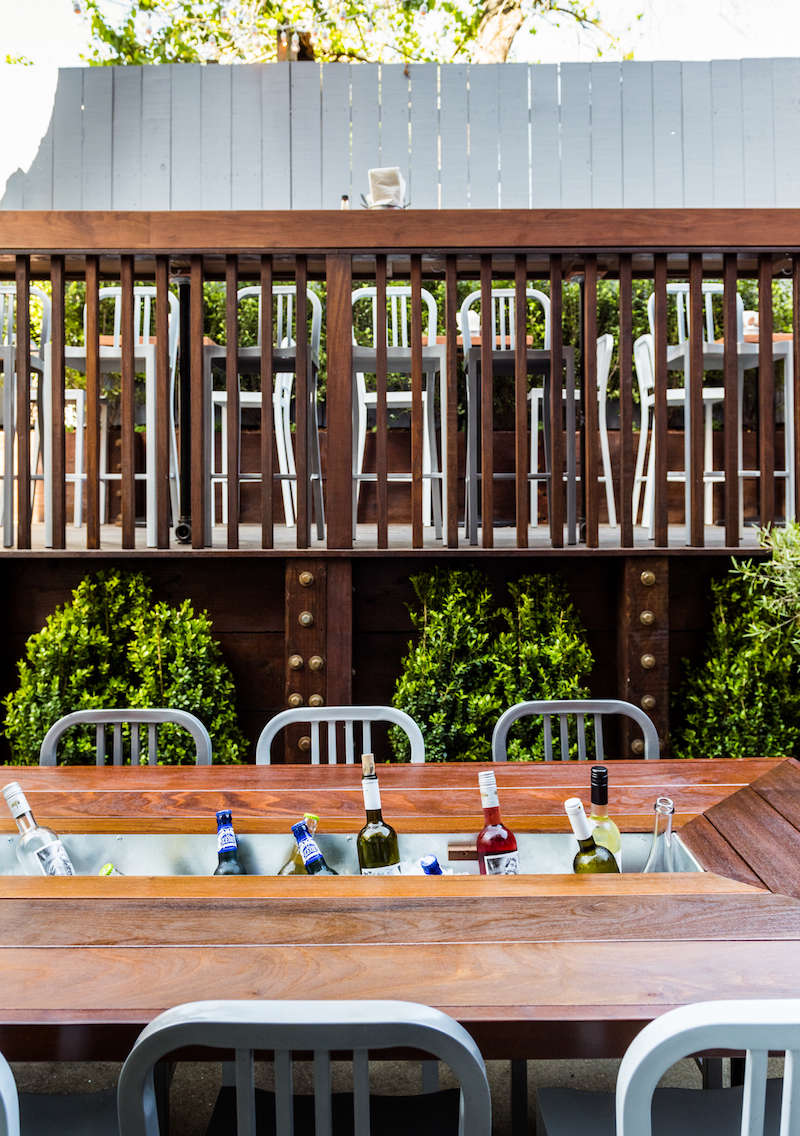 Above: A metal trough in the center of the oiled-wood table holds ice to keep Souvla’s house-label wine and beer chilled; it has holes for drainage and its metal surface keeps magnetic bottle openers close at hand. 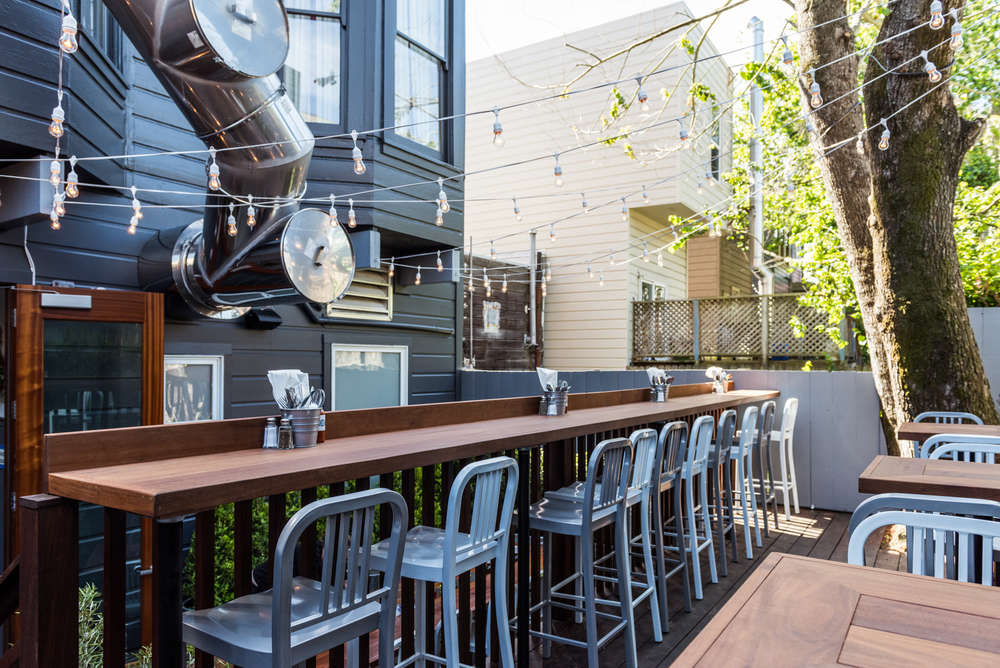 Above: A new dining counter at the deck railing serves outdoor diners. The stools are replicas of the Emeco Navy designs. 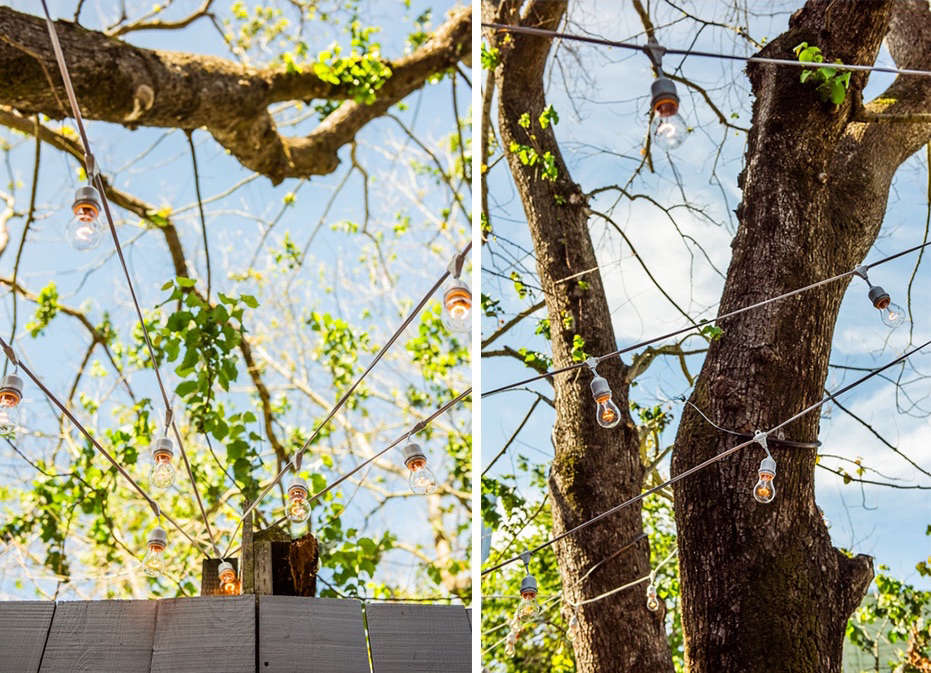 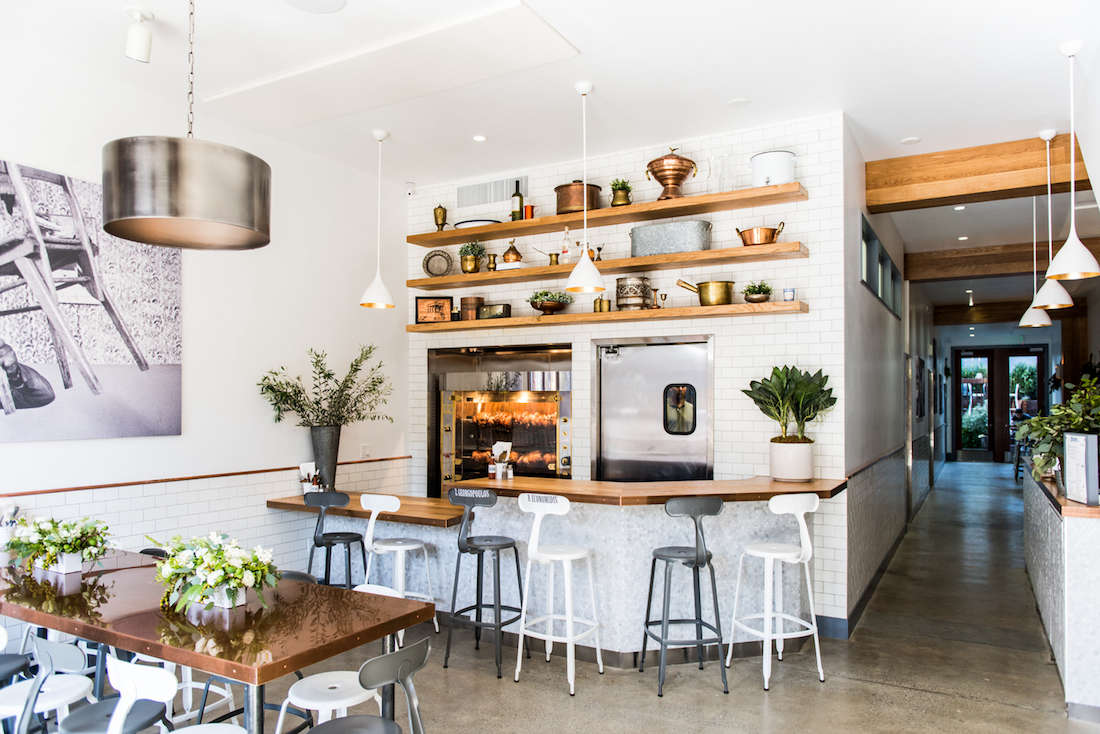 Above: The restaurant’s white, gray, and warm-toned interiors are punctuated with flower arrangements and potted plants by Eleanor Gerber-Siff from Wallflower Design in SF. 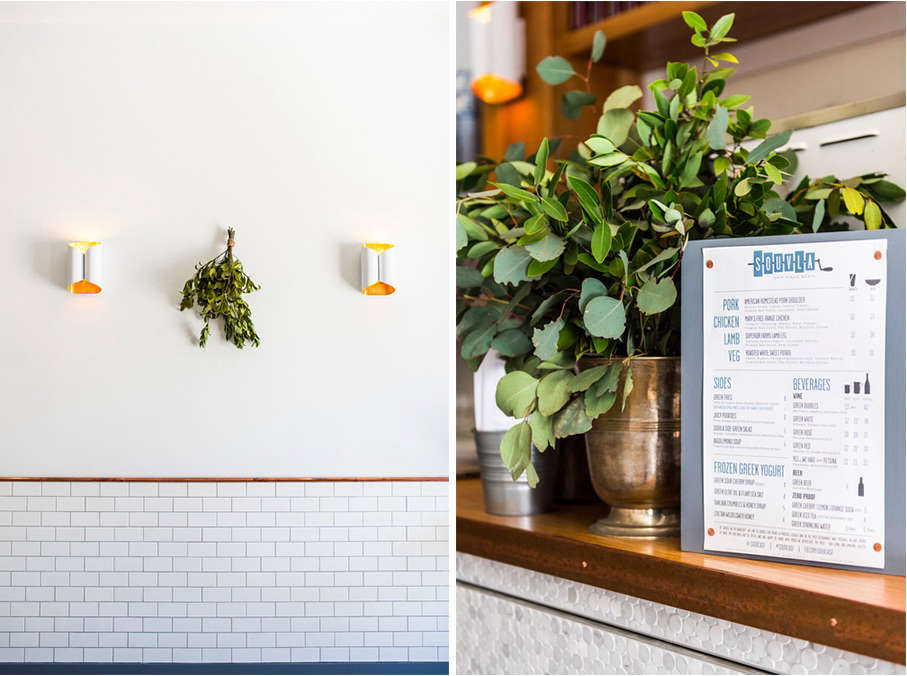 Above: At left, a simple bough of greenery hangs between two Selfoss Sconces from RH Modern. At right, a leafy arrangement from Wallflower Design. 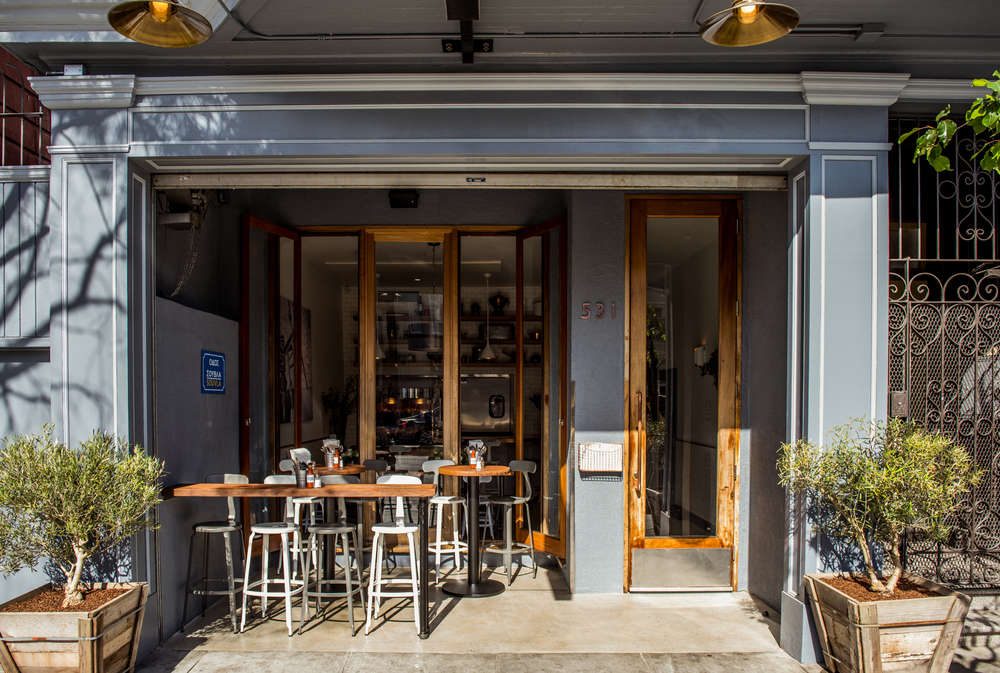 Above: Souvla NoPa is at 531 Divisadero Street in San Francisco.

See more Restaurant Visits including A Greenhouse Restaurant in Copenhagen and The River Café, London.