Carol and Peter Leonard were living in nearby Cranbrook when they saw the For Sale sign go up on a dilapidated Victorian glasshouse in the English village of Hawkhurst in Kent. Part of the original Lillesden estate, the greenhouse had fallen into disrepair over the decades, along with the once-grand mansion that a prosperous banker built in the 1850s.

By 2003 when the Leonards happened upon the greenhouse, it had been abandoned for 15 years. Windowpanes were broken, the garden was overgrown, ornate iron window hardware was rusted and unusable, and one side of the structure was on the verge of collapse.

But the Leonards, veteran remodelers who previously successfully tackled an oast house and a circa-1970s cottage, were up for the challenge. “We like playing around with houses,” Peter Leonard recently told the Daily Mail.

Photography courtesy of The Modern House. 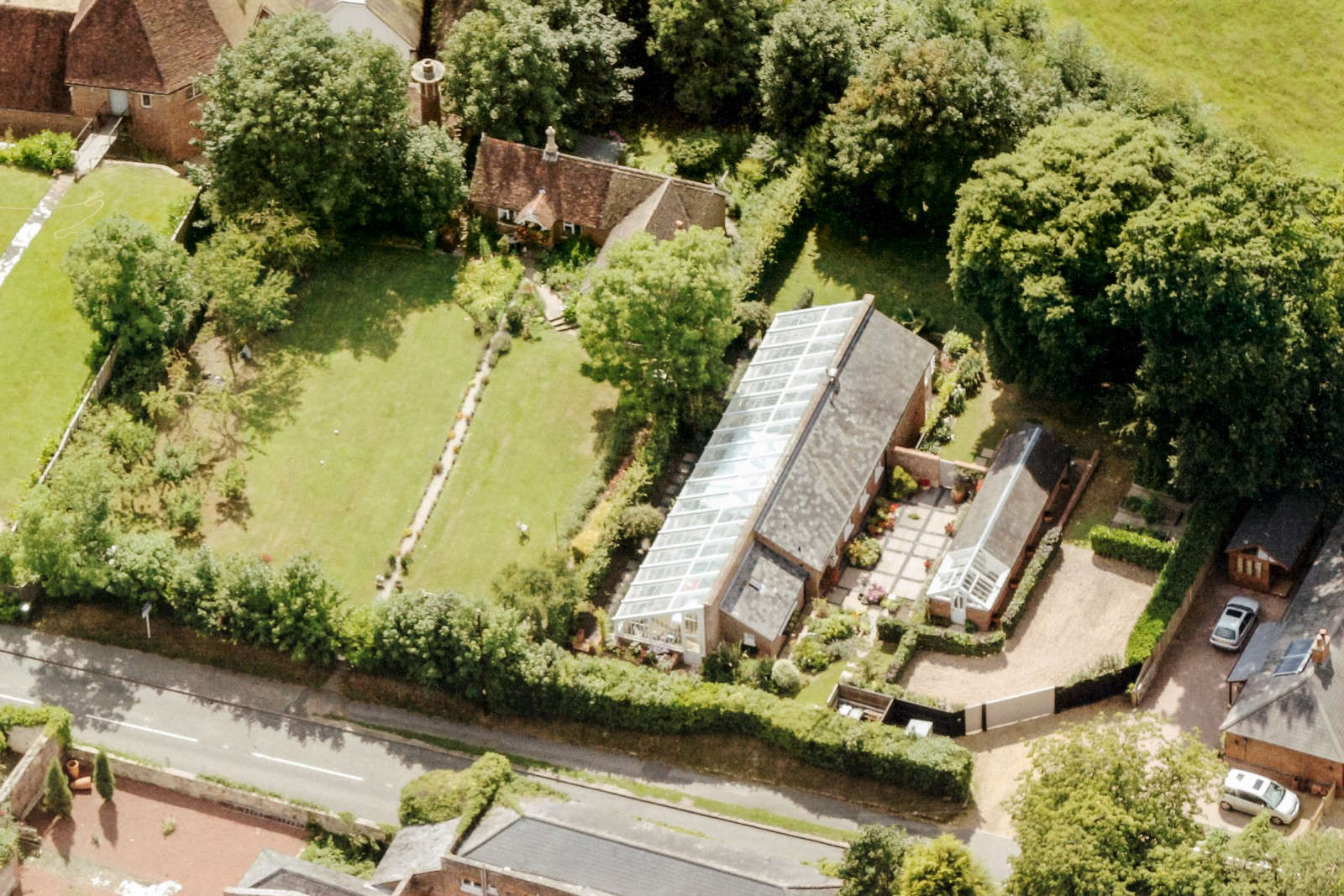 Above: Seen from above, the 75-foot-long greenhouse (at Right) originally belonged to the Lillesden estate (at Left). The remodeled greenhouse compound has a central courtyard and a small studio building.

After converting the greenhouse into a modern two-bedroom house and reviving the garden, the Leonards recently sold the house after listing it for £675,000 on The Modern House. 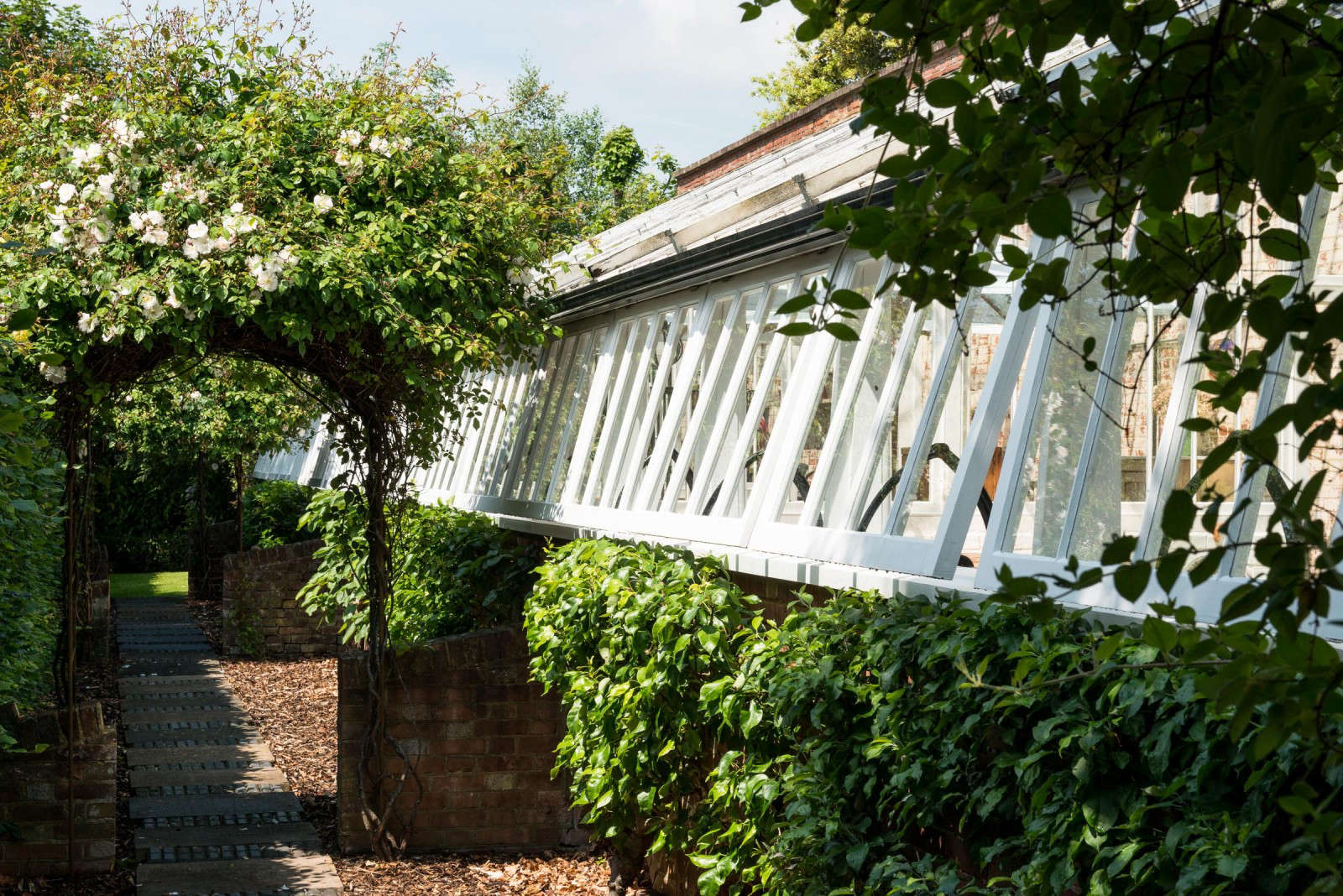 Above: A wall of glass greenhouse windows enjoys a southern exposure. Alongside is a footpath and rose-covered arbor edged by flowers and espaliered trees. 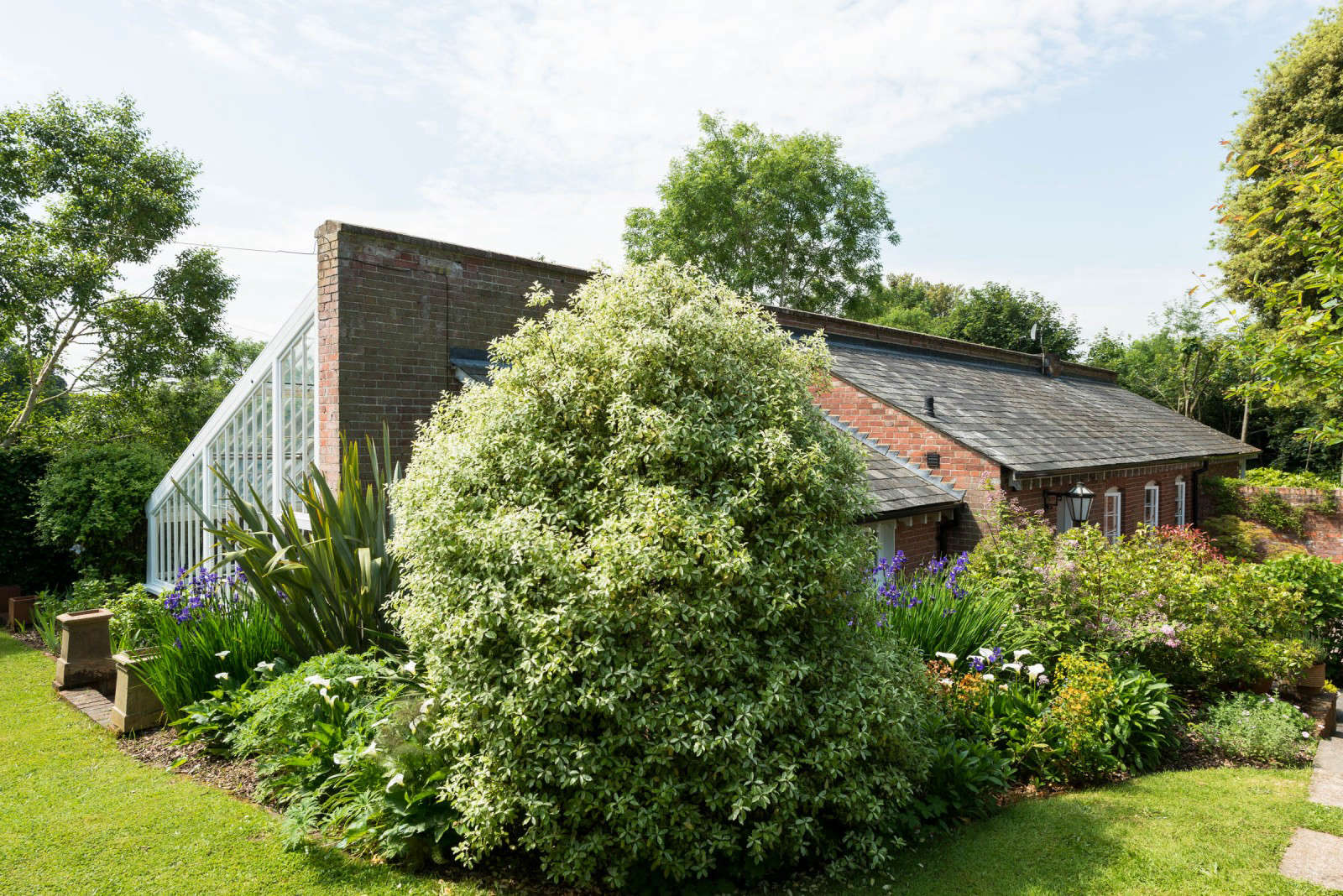 Above: A central wall that runs the length of the building originally separated the space into a greenhouse on one side and potting sheds, a boiler room, and a workshop on the other. 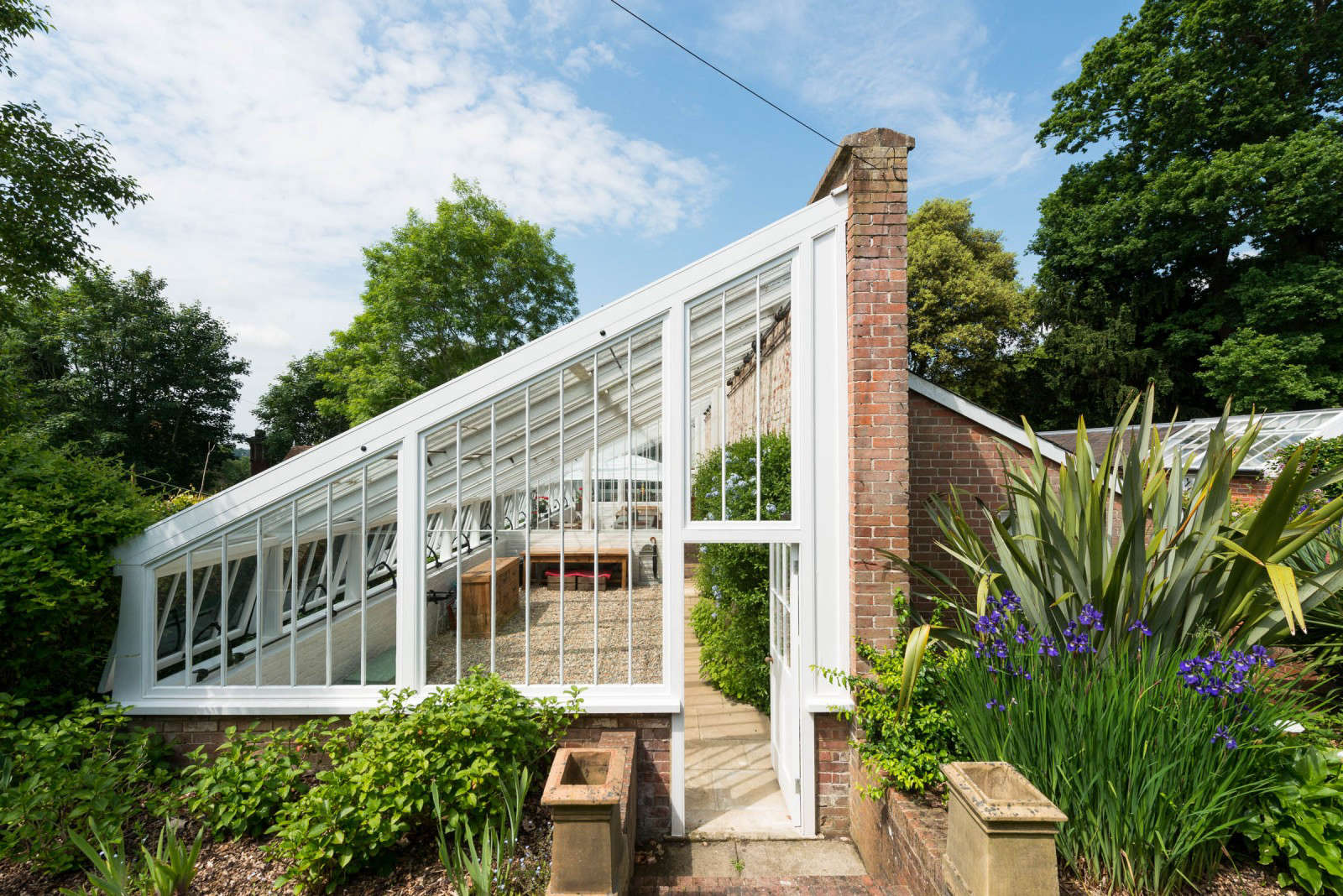 Above: The greenhouse, built of wood, brick, and glass, has a reclaimed brick floor. 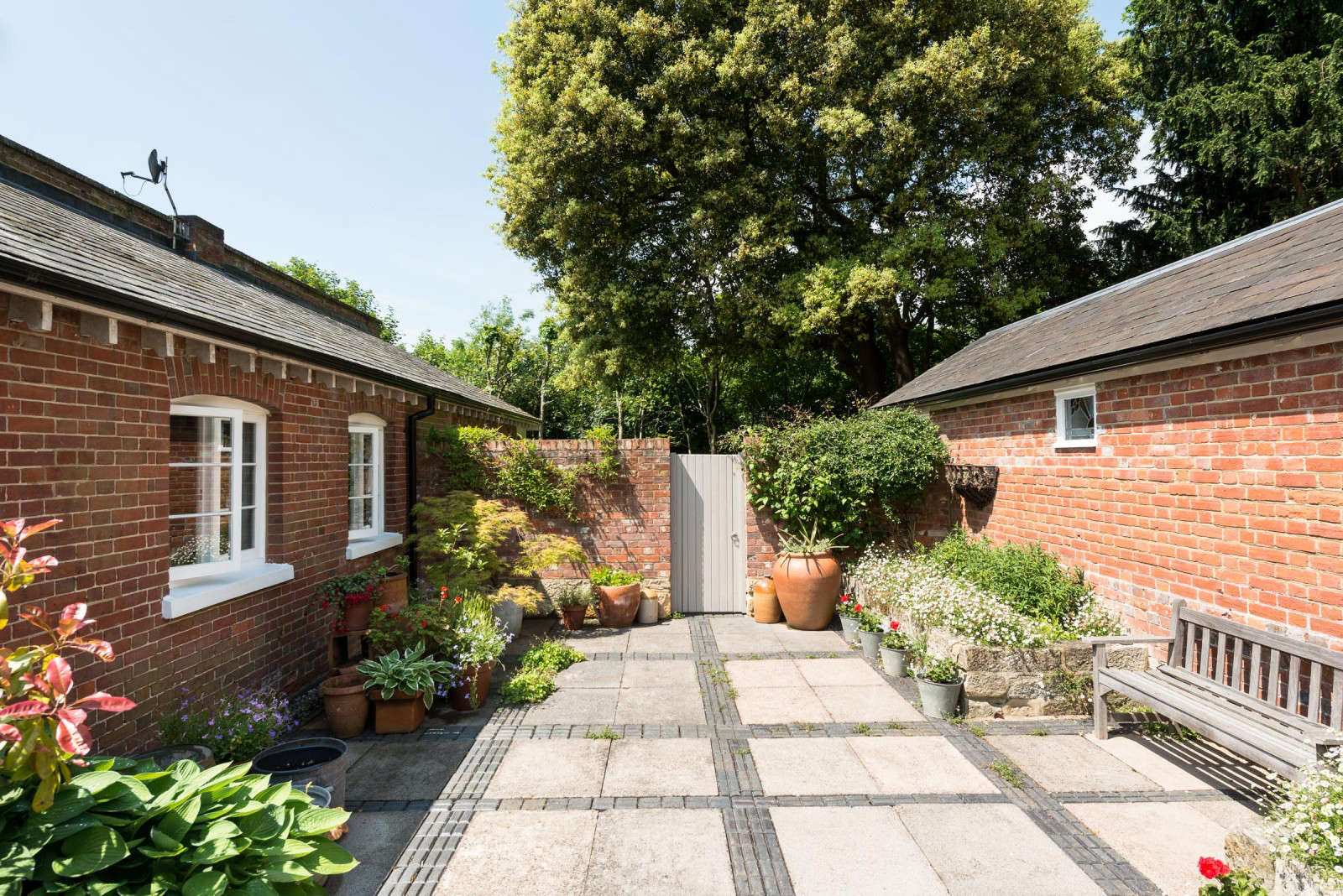 Above: Across the courtyard from the greenhouse is a smaller brick building the Leonards used as a shed and studio space. 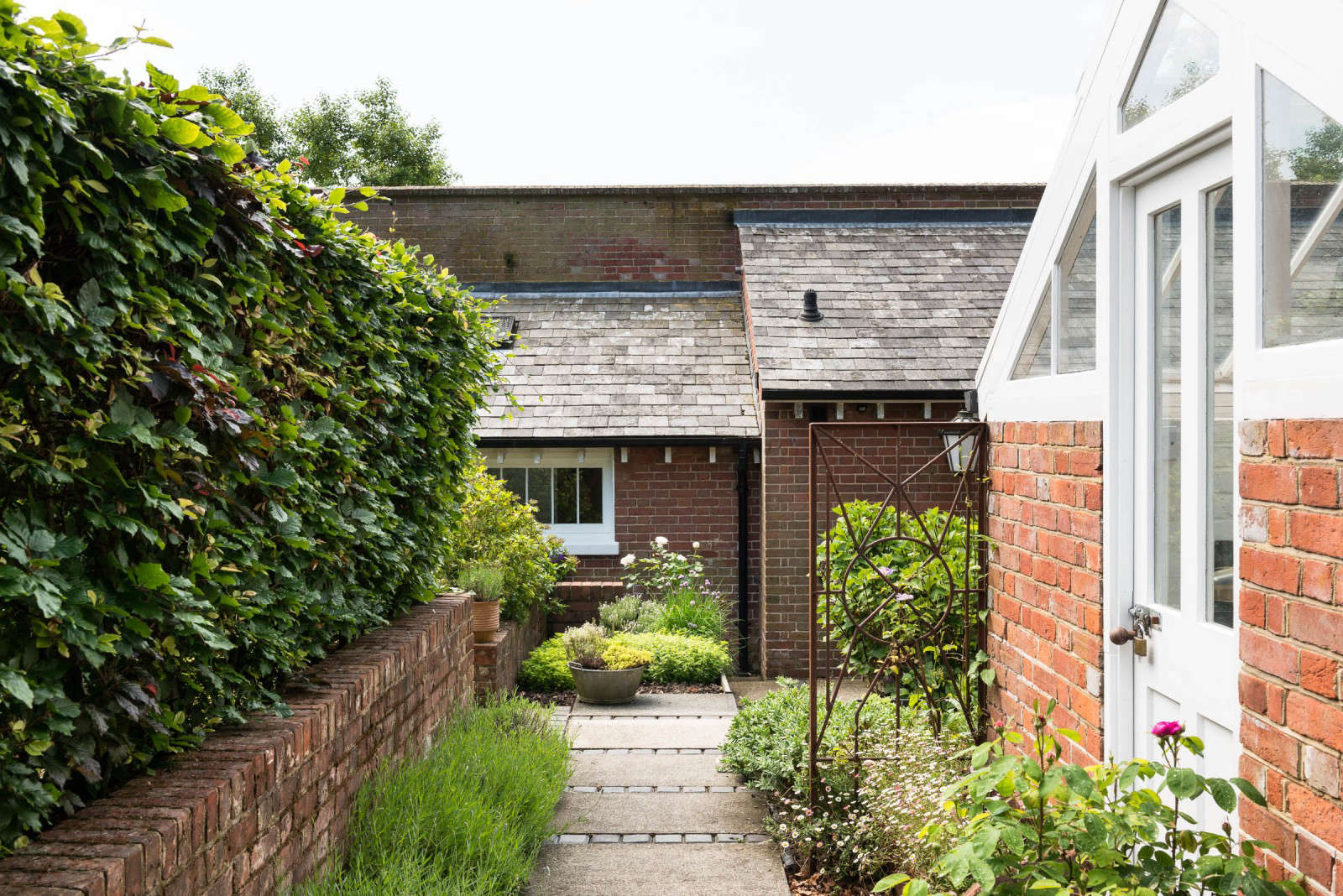 Above: Mature hedges and brick walls create privacy. In restoring the garden, the Leonards’ first task was to dig through the undergrowth to find clues to the layout and design of flower beds from an earlier era. 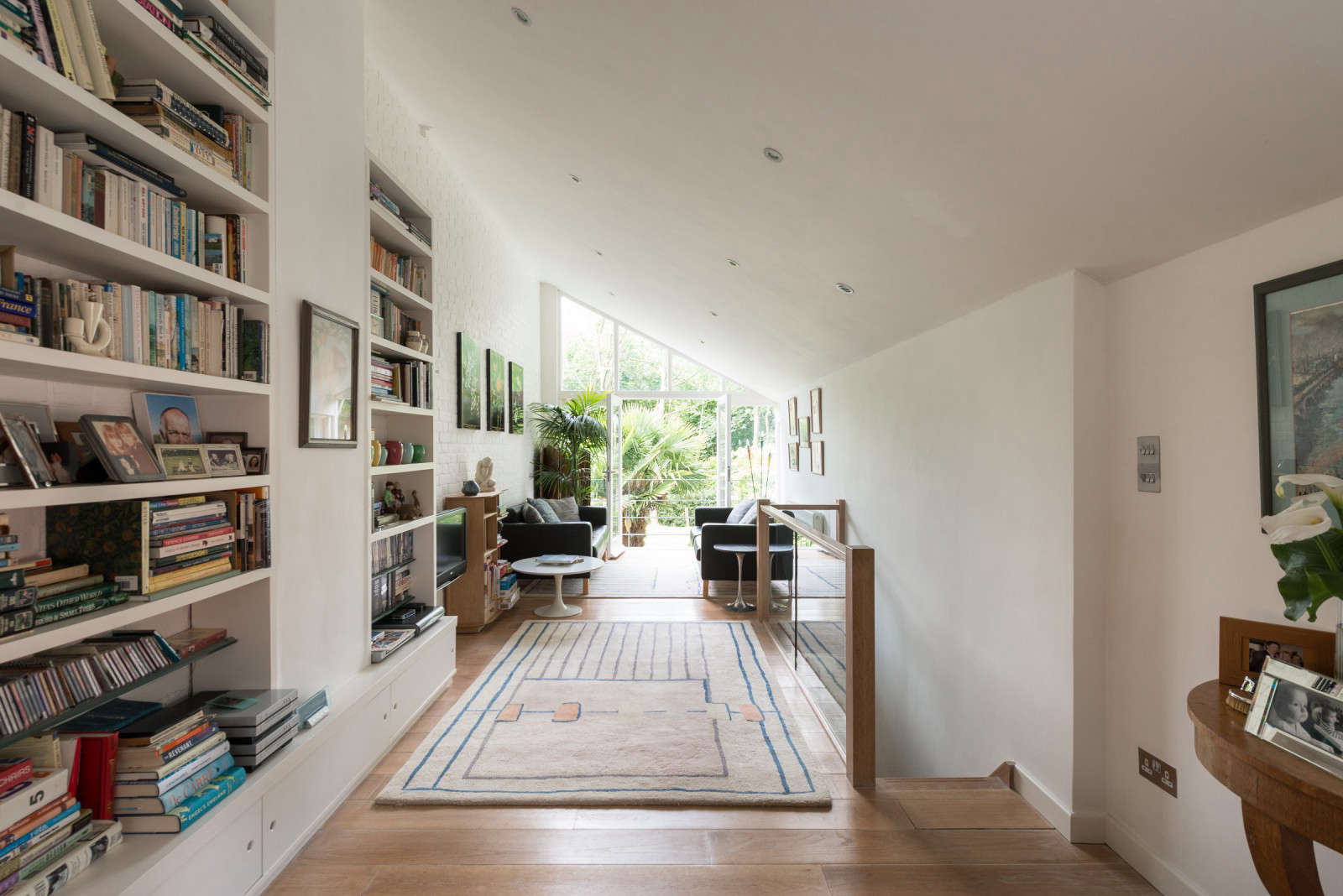 Above: On one side of the greenhouse, the Leonards added a modern living room with bookshelves and a balcony. 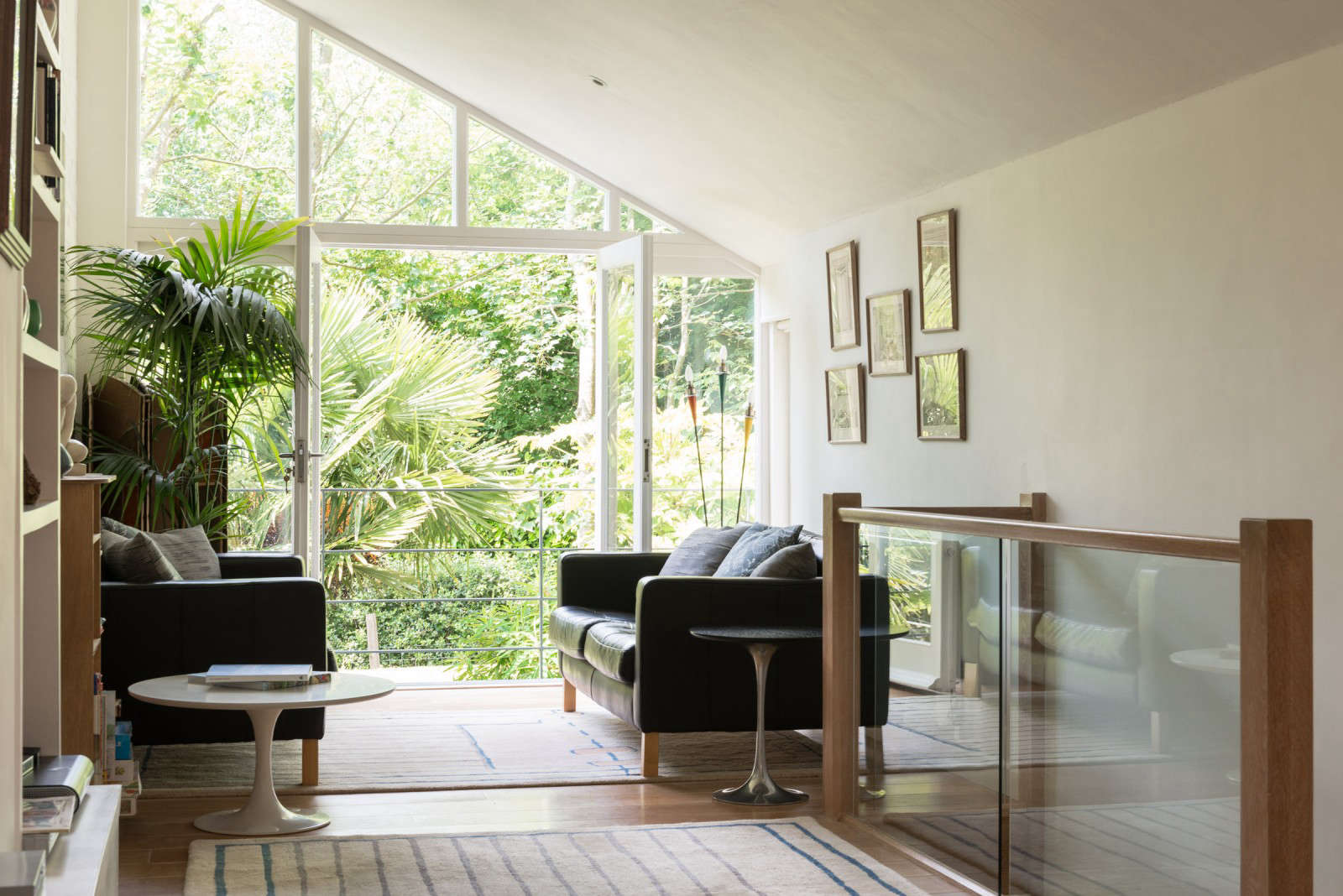 Above: The stairway (at Right) leads down to a lower level the Leonards dug out to make the home’s second bedroom and bath. 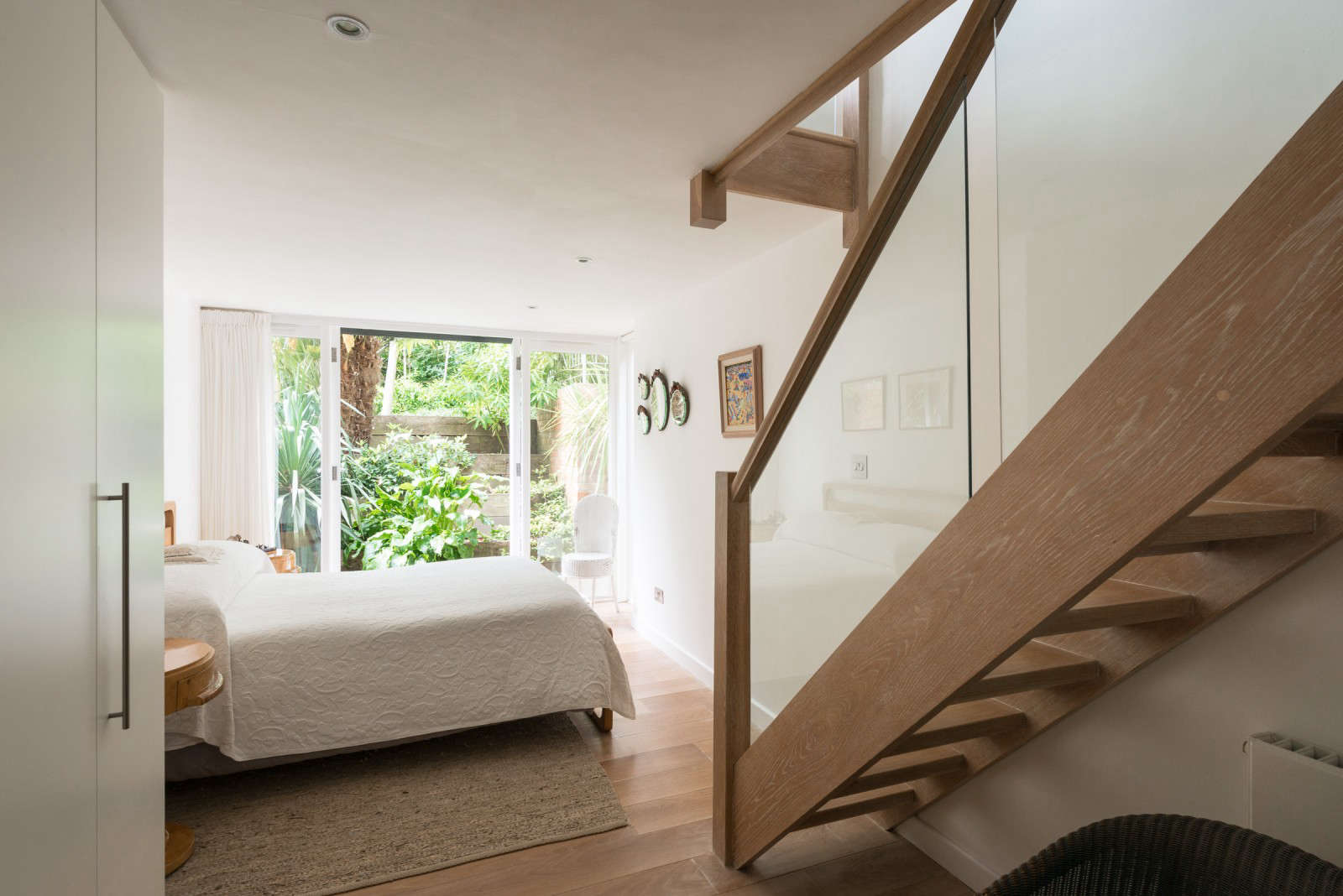 Above: On the ground floor, full-height glazed windows connect the second bedroom to a sunken garden—and to sunlight. 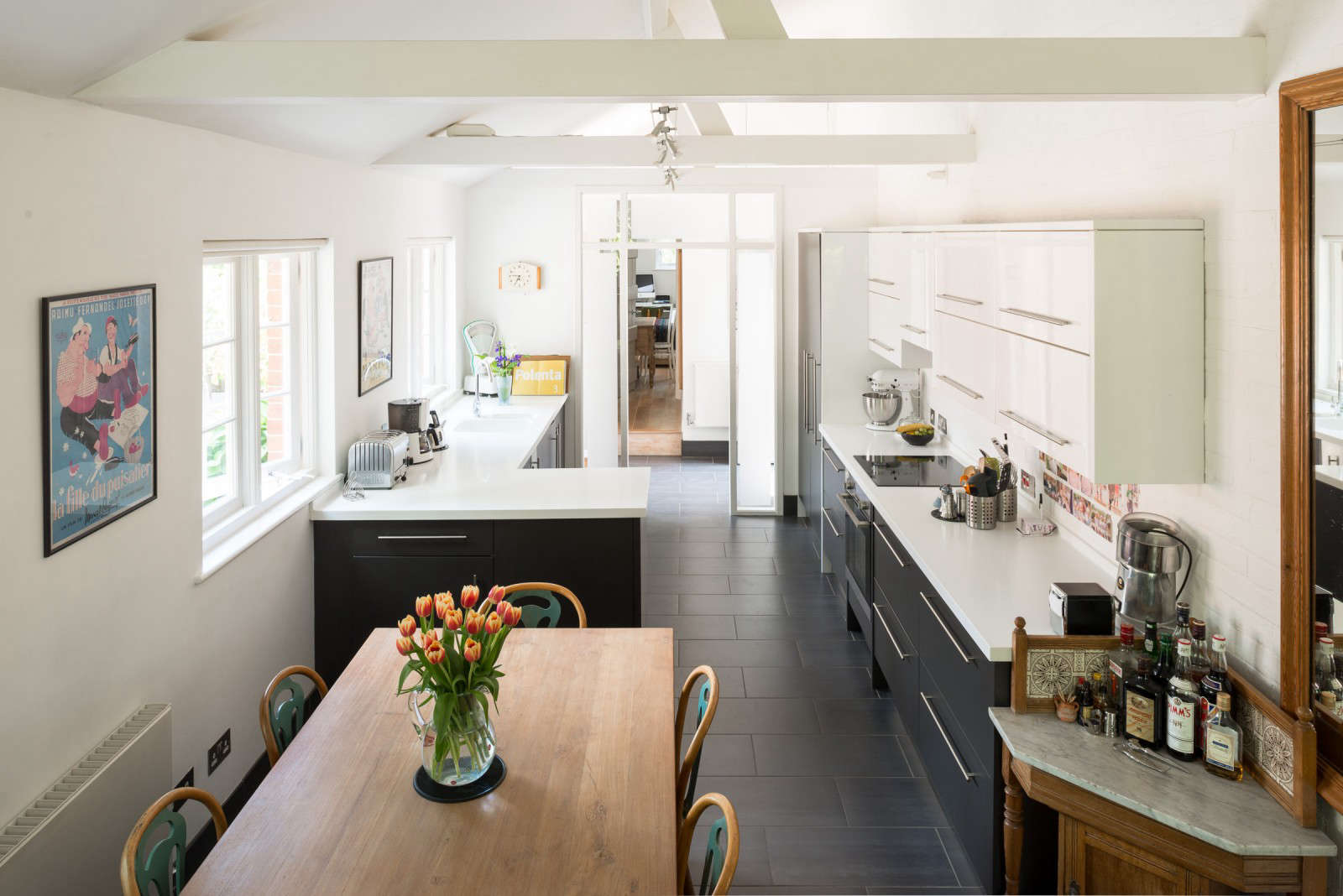 Above: The remodeled kitchen has a slate floor and connects to a bedroom with an oak floor and a second bath. 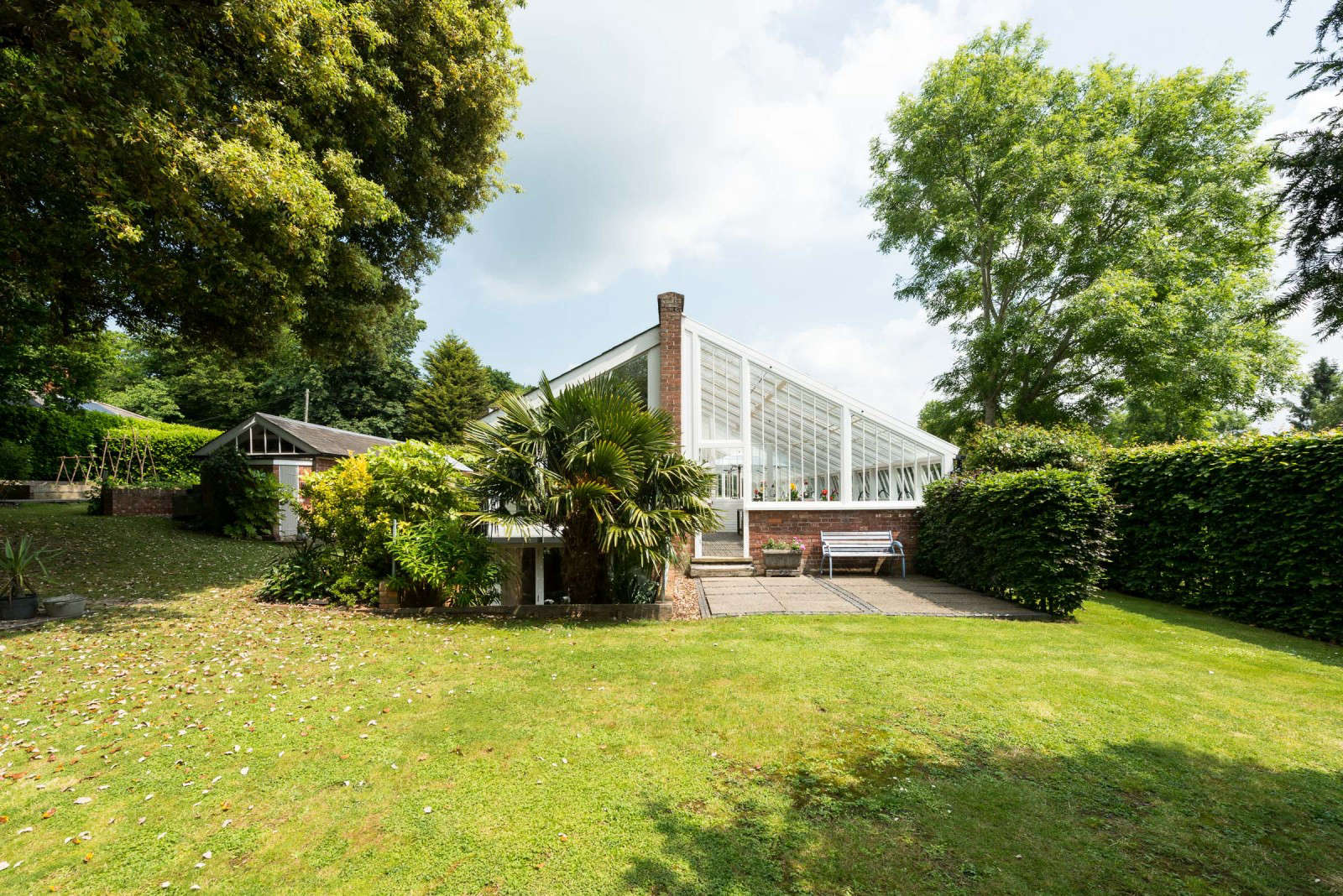 Above: Surrounding the green house is a large lawn of turf grass and at the northern end of the structure, a small patio. 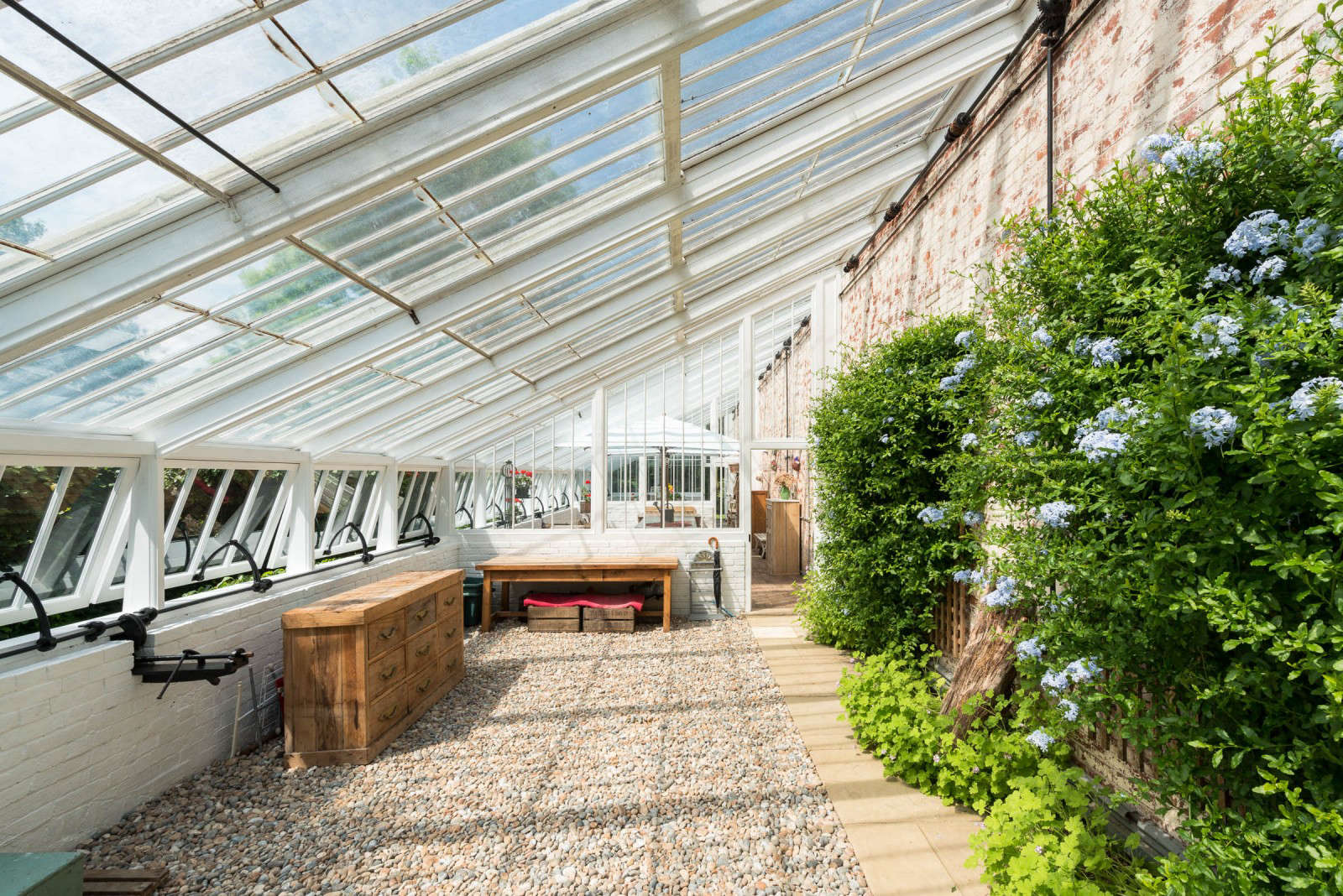 Above: Inside the glasshouse is a gravel floor, flowering vines on wall trellises, and the original cast-iron window cranks, meticulously restored. Glass in the windowpanes is new.

After selling the house, the Leonards are headed back to Cranbrook. Their next project? A small 19th-century cottage with a large, half-acre walled garden.

Wondering what life would be like in a greenhouse? See:

A Tiny Glass Studio in Barcelona.
An Ikea Kitchen in a Greenhouse, Paris Edition.

In collaboration with: Festive Holiday Decor from Terrain