On visiting the gardens of Britain’s great country houses we hope, even expect, to see a wonderful kitchen garden on proud display. Until recently, we would have been disappointed, the door in the wall firmly locked and the key shamefully hidden away.

The restoration of these walled gardens, with their vinery and pinery (for the cultivation of grapes and pineapples respectively) means that they are closer to being the center of operations at many grand houses once again. The massive dereliction has turned a corner. We want that: we want behind-the-scenes and we are interested in growing food. I’ve never seen the gilt-encrusted rooms at Chatsworth but have spent plenty of time in the restored kitchen garden. It is understandable then that we gardeners are looking for old and interesting varieties to grow, the story of which can be found in Heritage Fruits & Vegetables, a book by Toby Musgrave and Clay Perry. 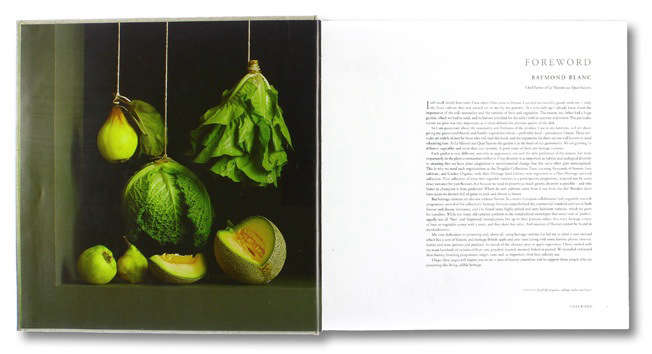 Above: A 224-page hardcover copy of Heritage Fruits and Vegetables is $83.75 from Amazon. The publisher’s retail price in the UK is £38. 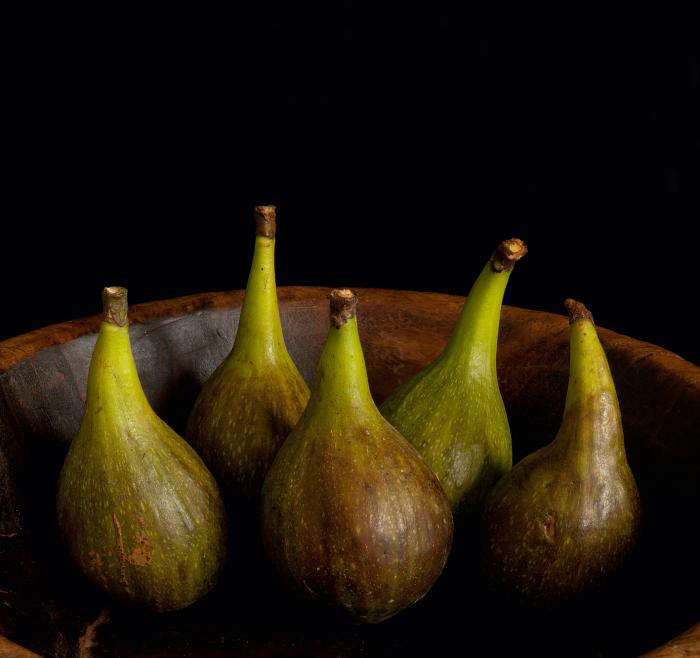 Above: Figs were brought to Britain by the Romans. This variety, ‘Brown Turkey,’ has been in cultivation since at least 1777, and it is as happy out of doors as it is under glass. Toby Musgrave says of growing heirloom vegetables: “Planting and growing a small bit of history is every bit as rewarding as nurturing, harvesting, and eating it.” These fruits and vegetables have stories to tell. 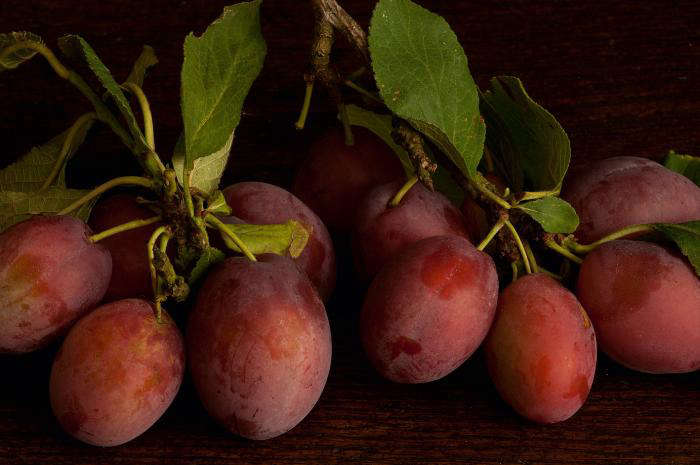 Above: Plum ‘Apricot Gage’, introduced in the 20th century. The name refers to its apricot-colored flesh. Gages are smaller than other varieties of plum and are oval-shaped. 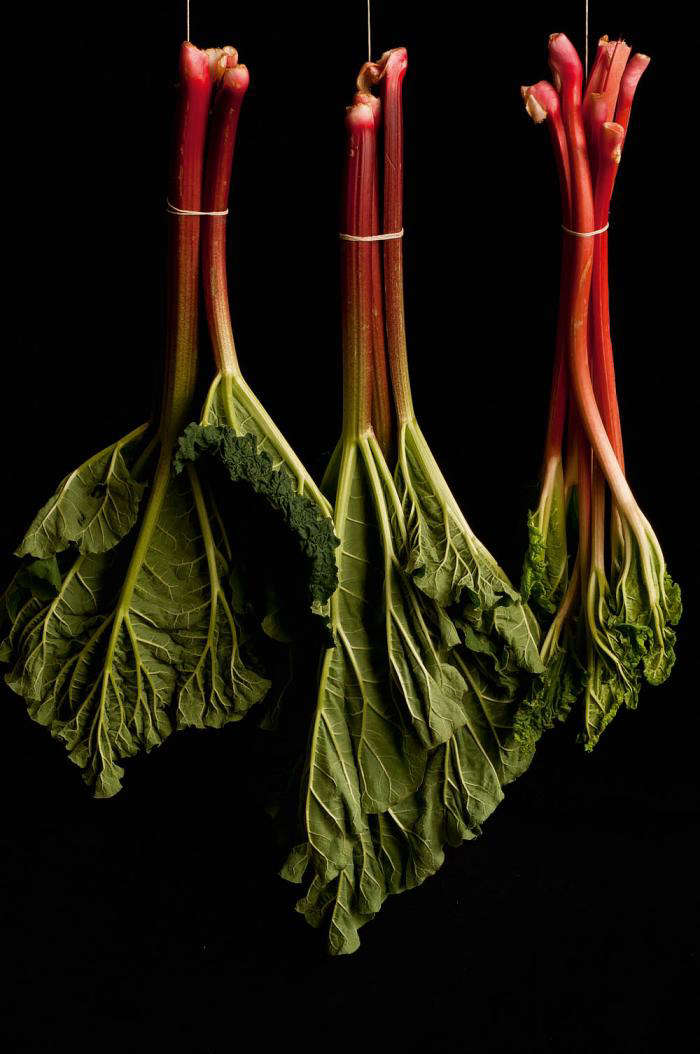 Above: Photographer Clay Perry conceived this book, and it was his idea to simulate the look of early larders, in the style of 16th century Spanish still-life painters. Fresh produce would have been hung to keep it fresh and presumably un-nibbled. The two bunches of rhubarb on the left are ‘Reed’s Early Superb’. On the right is ‘Timperley Early’, a forced variety. The “sticks” are the part we are concerned with, the large leaves of rhubarb being poisonous. 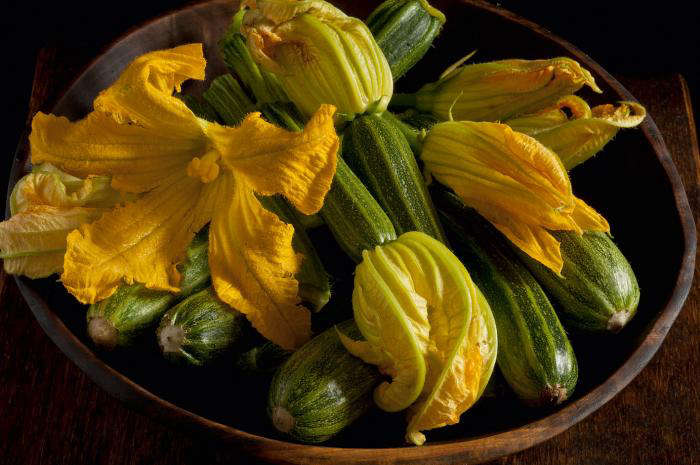 Above: Zucchini ‘Cocozelle’ is an Italian heritage variety with large flowers. As Charles M’Intosh wrote in his Book of the Garden (1855): “It is used for culinary purposes in all stages of its growth, dressed either whole while quite young, or cut into sections as it gets larger.” 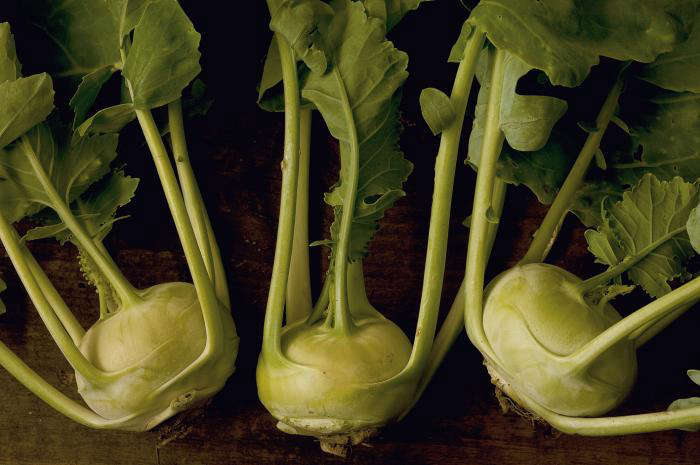 Above: Kohlrabi ‘White Vienna’. Kohlrabi is a Swiss-German hybrid of a name meaning ‘cabbage turnip’, its prosaic associations disguised in its arresting appearance. “For some reason, kohlrabi has never enjoyed much popularity in Britain,” says Musgrave. The Roman diarist Pliny called it the “Corinthian turnip” and sadly, turnips themselves suffer from an image problem. Some people like to grate kohlrabi into a salad. 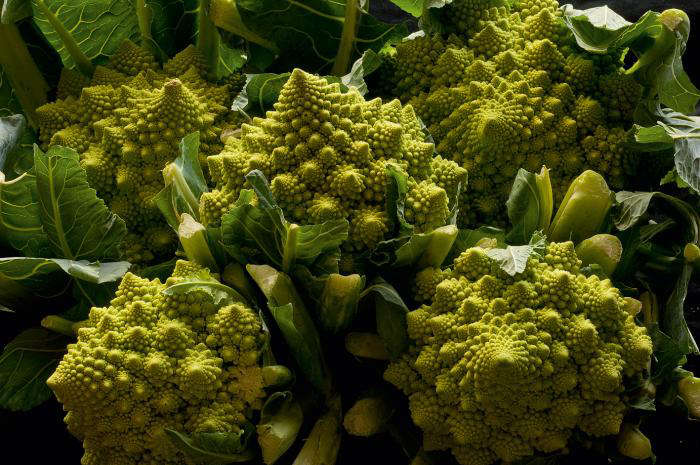 Above: Beautiful and strange and thankfully delicious too, cauliflower ‘Romanesco Minaret’ is a rediscovered Italian cultivar. It mingles very happily with tomato and chilli, served with pasta, in the River Cafe cookbook Green by Rose Gray and Ruth Rogers, long-term champions of cooking seasonally. 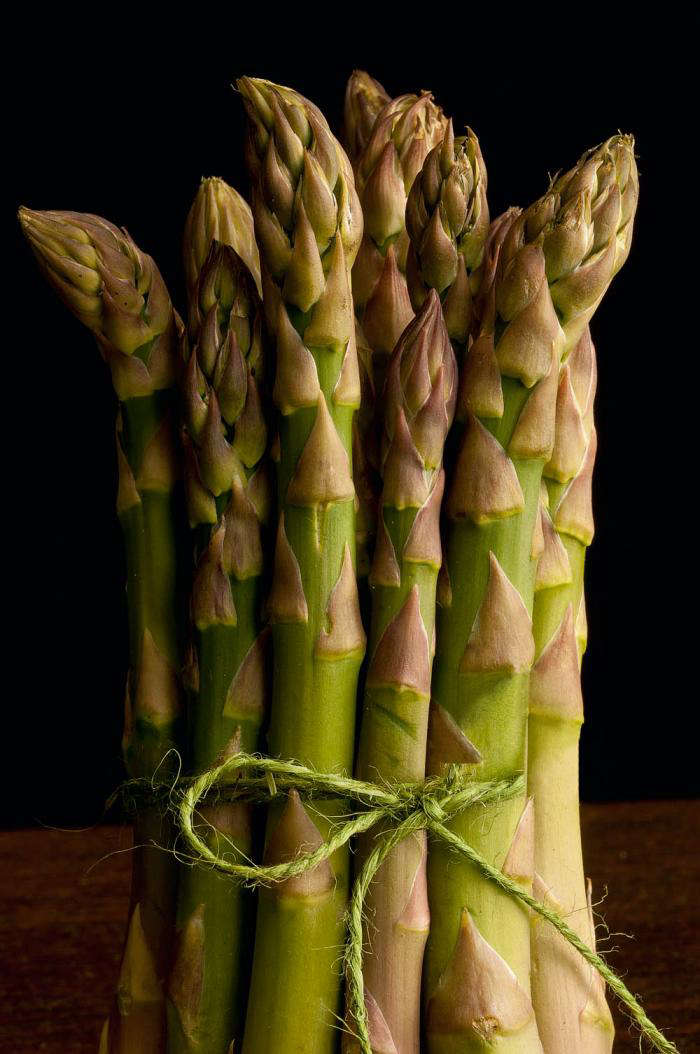 Abpve: Asparagus ‘Connover’s Colossal’, an American variety from mid-19th century New York, renowned for its very large spears. “In ancient Egypt, asparagus was presented as an offering to the gods,” says Musgrave, and with good reason. They may take up a lot of space, they may require patience between planting and the first crop but they are intensely rewarding to grow. Their feathery foliage looks good in a potager or any ornamental garden. 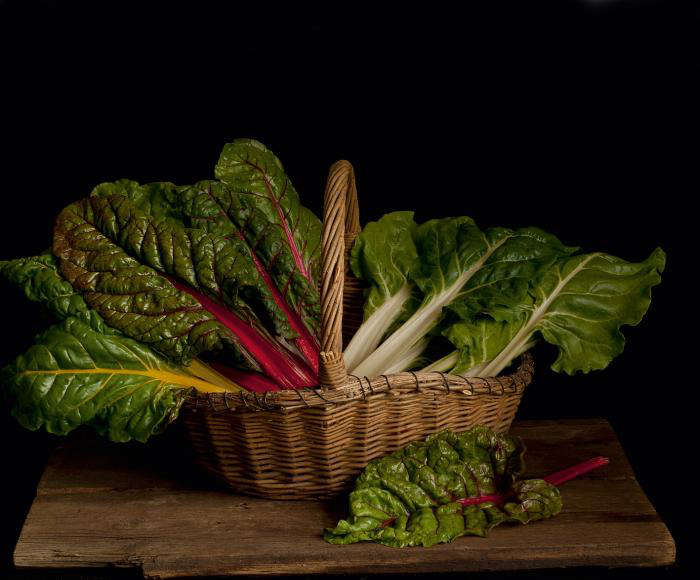 Above: Chard. From left: ‘Rainbow’, ‘Rhubarb’, and ‘Swiss’. Chard was written about in classical times and would have been taken to Britain by the Romans. It was all but forgotten during the Middle Ages and even now it is not much available in supermarkets. It is a staple of veg box schemes in the UK, in which a random assortment of seasonal vegetables and fruit (and sometimes flowers) is delivered to the door. 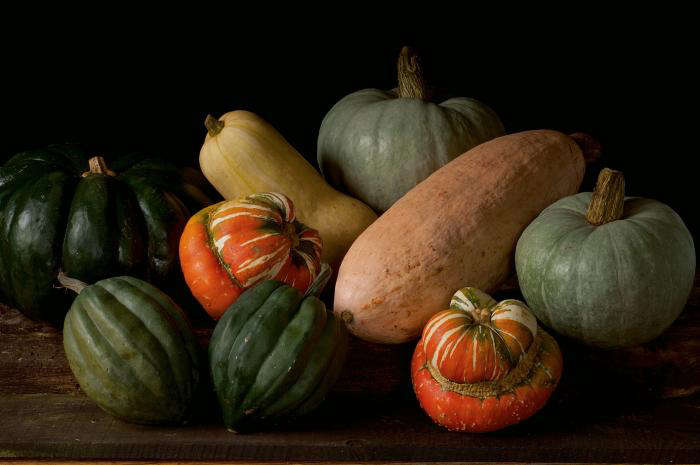 Above: Winter squash. Says Musgrave: “These curious cucurbits did not catch the imagination of wealthy garden owners in the way melons and cucumbers did.” Americans have always been much more keen on pumpkins and squash. The specimens shown here are worth growing for their names alone. From left: ‘Muscade de Provence’, ‘Table Queen’, ‘Turk’s Turban’, ‘Spaghetti’, ‘Blue Ballet’ and in no danger of being overlooked: ‘Pink Banana.’

(N.B.: For more inspiration, see 147 images of Vegetable Gardens in our Gallery of rooms and spaces.)