For some of us, successful plant combinations are rather difficult. My own former garden was a series of episodes: the rambling rose tunnel, the collection of irises, the pots of agapanthus. Otherwise there was a lot of ground cover and an ersatz border filled with surplus plants that I didn’t know what else to do with. Grasses I’ve always found a bit scary. Like an inhibited cook, I seek clear and achievable recipes to get past the muddle, and now I have a collection of them, in a book by the former editor of Gardens Illustrated, Lucy Bellamy.

The idea of Grow5 is to keep it simple, and more visually readable, with just five ingredients for different garden situations. It is intended for smaller outdoor spaces, typically urban, but there is no reason why the recipes could not be applied to a series of gardens within a larger space, anywhere. As Lucy reminds us, nature plants itself in multiples—more like a tapestry than a series of singular effects.

Let’s explore a couple of these gardens, using the repetitions and rhythms of just five plants:

Inspired by the Piet Oudolf approach in seeing beauty at every stage (fall, winter, spring, summer, and fall again according to the film Five Seasons: The Gardens of Piet Oudolf), this garden has distinctive seedheads, some of which look very similar to the flower. Geraniums are the earliest to bloom, continuing on and off until autumn. G. ‘Orion’ closely resembles British meadow cranesbill, the name drawing attention to the shape of the ripening seedpods, beautiful in themselves, as Mr Oudolf would no doubt concur.

Famously beautiful at every stage, Allium christophii has flower decorators cutting and storing them for  arrangements later (silver spray optional), but they also light up borders through summer and autumn as sculptural spheres, held on stems in various stages of collapse. Allium siculum, on the other hand, is very different as a seedhead, moving from something you might have seen on the head of HM the Queen in days gone by, to a straw-colored conical bonnet, as pollinated seedheads reach upwards, meeting in a point at the top.

Western coneflower enjoys similar conditions to meadow cranesbill (a meadow that doesn’t dry out, ideally) and it is native to the American northwest. The seedheads are not much of a departure from the flowers, and provide skeletal height through winter.

After randomly scattering the allium bulbs and planting them in the autumn, spring is the time to address the perennials. “Thinking of each plant as a member of a group rather than an individual, space the plants out on the soil, still in their pots, in an undulating pattern,” Lucy instructs us. They should be close enough to look like a community, positioning one plant within a group near another and “allowing the two plants to come together at their tips.”

The above planting combination is inspired by nurseryman Keith Wiley and his garden Wildside in Devon, southern England. Grasses make an excellent foil in terms of texture, color, shape and height for the distinctive flowers. These in turn add more textural foliage with the strappy leaves of agapanthus and day lily, and an airier element from the bellflower (campanula).

Lucy advises starting this mid-summer garden with the perennials, spacing them out in their pots before threading the grasses between them. Space-wise, bear in mind that the day lily and agapanthus will grow into “quite chunky plants.”

“Form as well as color is a useful tool in a small space, and the verticality of the grasses is a good foil to the flowers’ more dynamic blooms.” 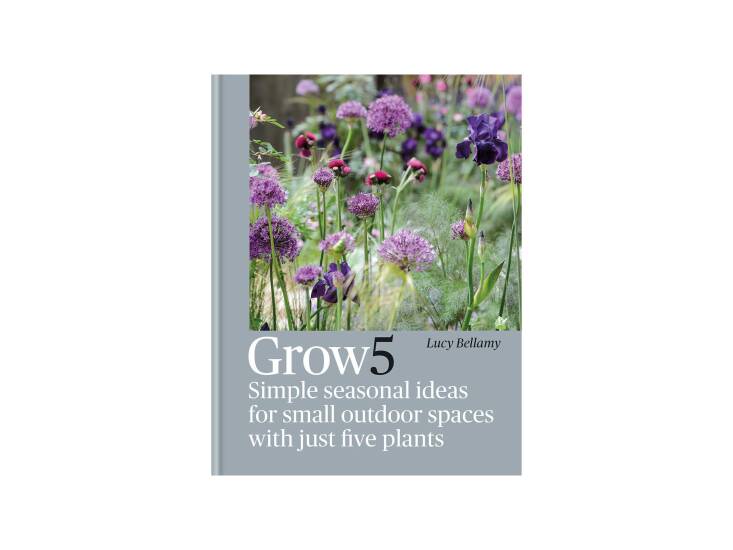 Above: Grow5 by Lucy Bellamy is published today in the UK (Mitchell Beazley, £22) and on May 10 in the US (Hachette).