The parsonage where the Brontë sisters (and brother) grew up in Haworth, Yorkshire, is one of the most atmospheric places in England. What an offer, then, for dyed-in-the-wool Brontë fan Sarah Statham, one half of the creative force behind Simply by Arrangement, to fill it with flowers last week to celebrate the 200th anniversary of the birth of Charlotte Brontë. 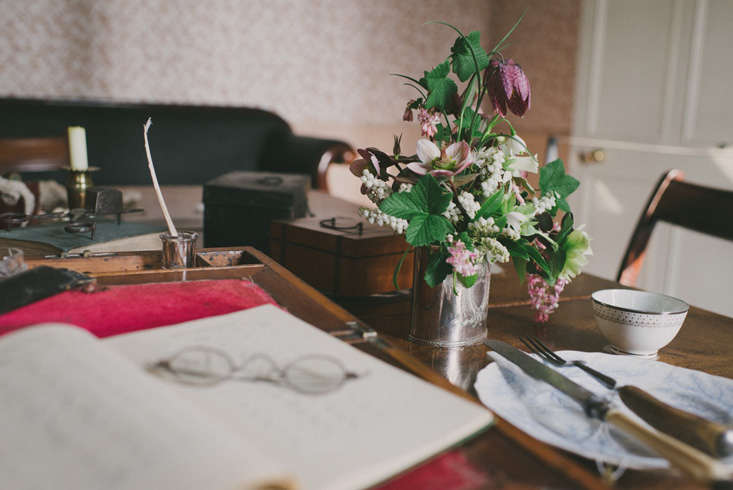 Above: An engraved silver cup on the dining room table holds the subtle colors of hellebore, lily-of-the-valley, flowering currant, and a solitary nodding bell of the snake’s head fritillary.

For the Brontë sisters, the dining room at Haworth Parsonage doubled up as a rather crowded writing room. In 1847 Jane Eyre, Wuthering Heights, and Agnes Grey were all published, the debut novels of Charlotte, Emily, and Anne respectively. 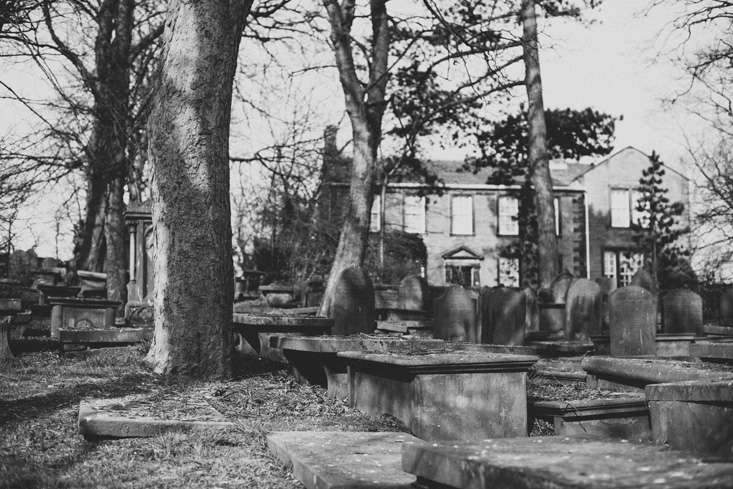 Above: The wife of Reverend Brontë died when her six children were young. Death was never far away from the parsonage, on the edge of a remarkably congested churchyard. All of the Brontë siblings died young, of tuberculosis. In a village where the average age of death was 24, four of them did quite well, with Charlotte reaching 38. The parsonage is on the top of the village, close to the fresh air of Haworth Moor, which may have helped them to survive various outbreaks of dysentery, typhus, cholera, and smallpox.

Above: Would Heathcliff like it? A wide urn, filled with bluebells and fritillaries fills just enough of the window sill while twisted hazel gives the arrangement some height.

When Sarah and Christie of Simply by Arrangement were asked to decorate the parsonage last week for Charlotte Brontë’s birthday celebrations, they decided to share the privilege with other cut-flower enthusiasts and held a workshop in the schoolroom next door to the parsonage. 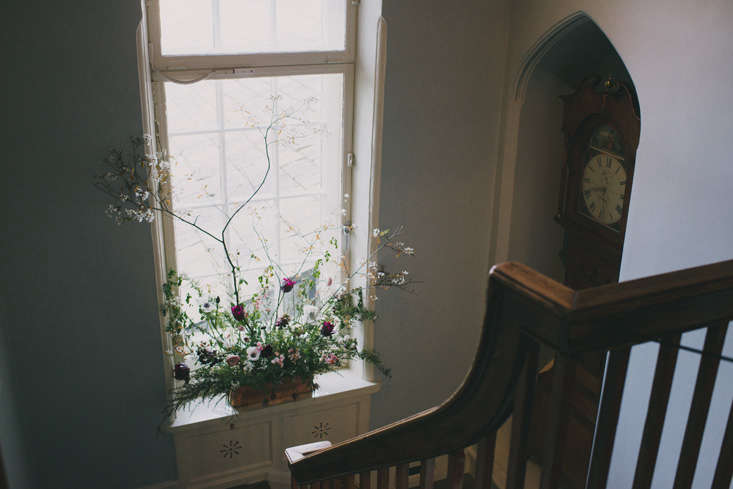 Above: Blood-red tulips mix with pale ranunculus in a wide urn, while branches of Amelanchier range around, spreading upward and outward. Sarah Statham (her Instagram account is wonderful) makes no secret of her admiration for Constance Spry, who was a genius with height and volume, while making use of less conventional plant material. Sarah and Christie asked their students to consider each room on its own merits:  “We tried to use vessels that worked in harmony with each room; white porcelain for bedrooms, copper for the kitchen, and handcrafted wooden boxes,” says Sarah. “But we went a lot wilder with the flowers.” 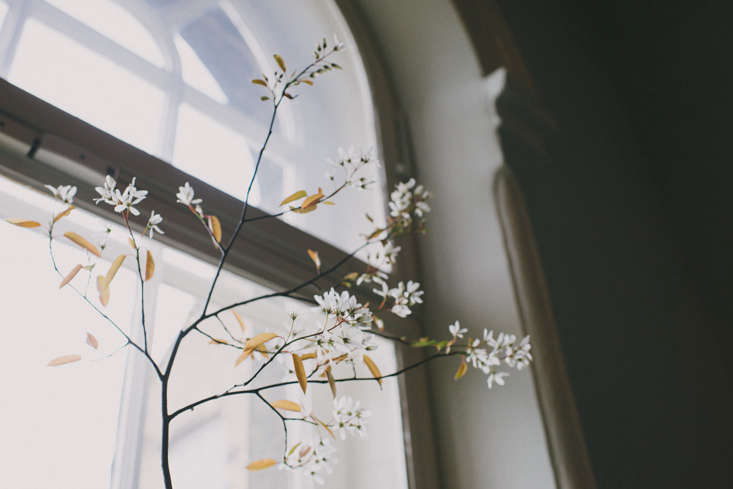 Above: Amelanchier complementing the shape of the tall window in the stairwell. The house was decorated with British flowers, the kind which would be available to someone living in a parsonage in Yorkshire. The selection of blooms in April is “vast,” according to Sarah: “It’s a perfect time.” 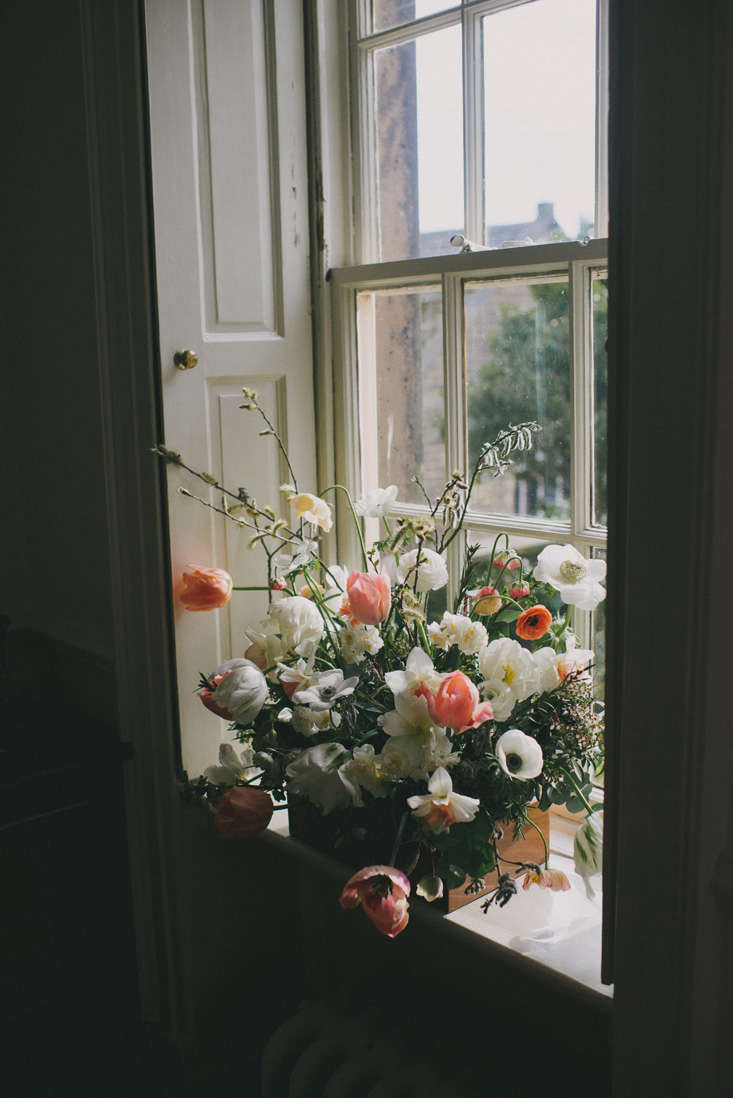 Above: Tulips of peach and white are joined by ranunculus, daffodils and crooked branches of catkins. “We know that the sisters would use wild flowers and probably make small posies for the house,” continues Sarah. The arrangements created by the workshop group were not only seasonal and local but, inevitably, there was an impulse toward current ideas of beauty, artistry and drama. Despite this, says Sarah, “I can certainly see some of the sisters’ work in the wildness of the flowers we arranged.” 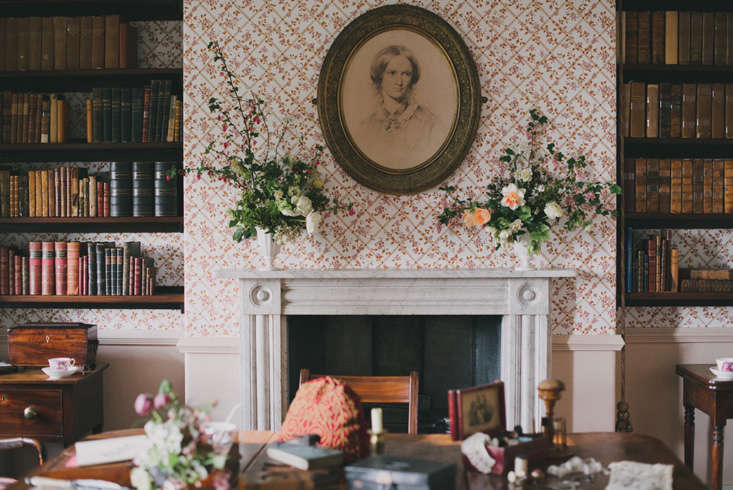 Above: An asymmetrical arrangement in matching vases. Tulips and daffodils feature on either side of a copy of a drawing of Charlotte, commissioned by her publisher after the runaway success of Jane Eyre. Branches of flowering currants wander upwards, undermining the neatness.

In collaboration with: A Museum’s Worth of Art, at Home

Mother’s Day: Her Favorite Flowers Delivered to the Door

How to Navigate the NYC Flower Market