Is this the real test of a marriage? Can you work together in a 250-square-foot studio without committing homicide? “It’s actually very pleasurable for both of us,” says Ayelet Waldman, who shares the backyard writer’s studio in question with her husband, Michael Chabon. Although the two writers (her new novel, Love and Treasure was published last week) keep different schedules, they sometimes find themselves together in the small shingled studio in their backyard.

Maybe it works because of the couple’s famously intimate relationship (“I gotta admit I sorta envy them,” wrote one Gawker commenter–apparently not a professional writer–earlier this week). As for me, I’m happy to go on record admitting to being jealous of their writer’s studio. Let’s take a look around:

Photographs by Aya Brackett for Gardenista. 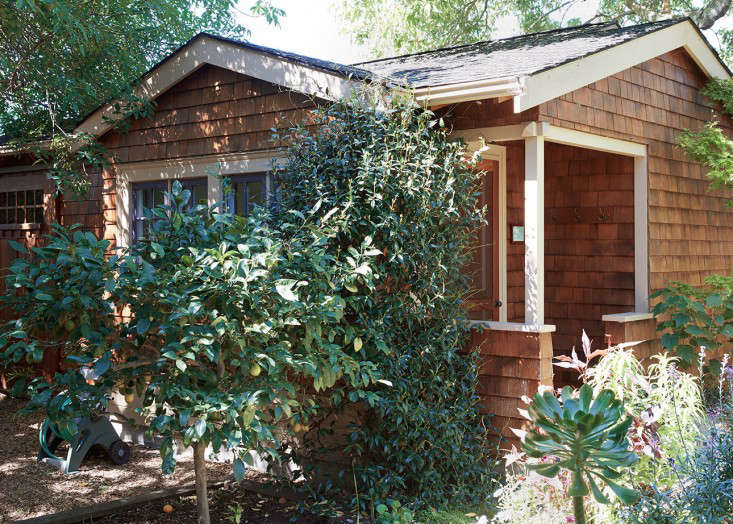 Above: The freestanding studio looks like a miniature version of Waldman and Chabon’s shingled Craftsman house built in 1907. Originally a garage (with barn doors), the studio was in “a dramatically rundown state” when the couple moved in, says Waldman. “Rats running around. Horrific.”

After it was renovated by Berkeley design-build firm Friedman Brueggemeyer, the studio became Chabon’s exclusive retreat and the subject of his 2001 essay “A Fortress of One’s Own” in This Old House magazine. “We moved to that house when I had just started writing, and I hadn’t sold anything yet, so I didn’t think I deserved an office,” says Waldman. “Then I had terrible repetitive stress injuries, and arthritis in my pinky finger, so I got an office out of the house, but that was super lonesome. So Michael said, ‘Let’s share.'” 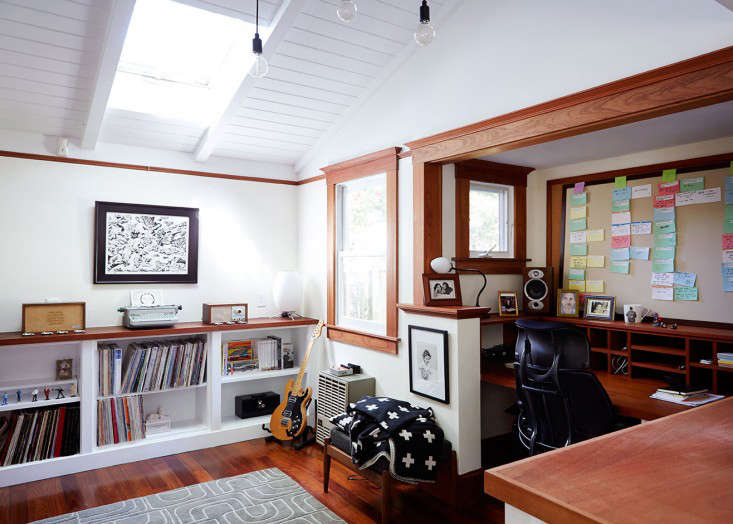 Above: The studio has two separate but open work bays–Waldman’s desk sits beneath a bulletin board she covered with color-coded notecards while working recently on the script for a TV pilot–and a shared central space.

Is it ever annoying if one spouse is on the phone while the other is trying to write? “We are never on the phone in there–publicity, interviews, hondling with agents all happens in the house–because we really try to keep the space purely for real work,” says Waldman.

And the guitar? “Michael plays it a little bit,” Waldman says, “but he’s not in a Dad band yet. I think you have to be 53 before you join one.” 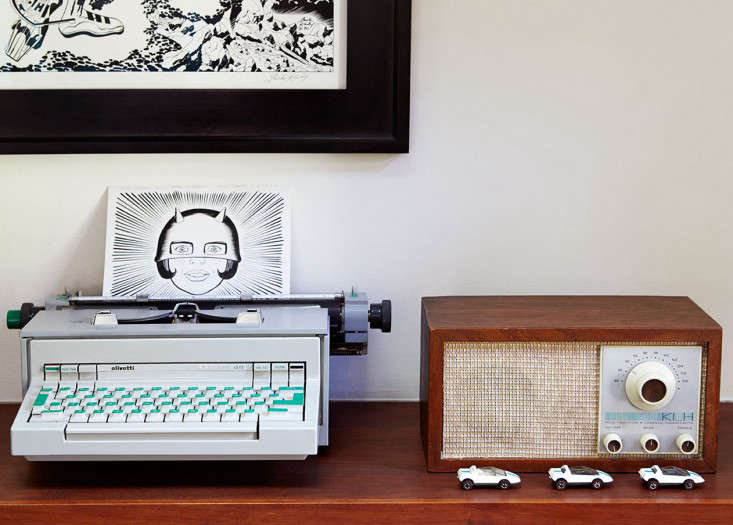 Above: Chabon collects typewriters. “Michael is obsessed with obsolete technologies,” says Waldman. Other collections include: eight-track tape players and turntables. 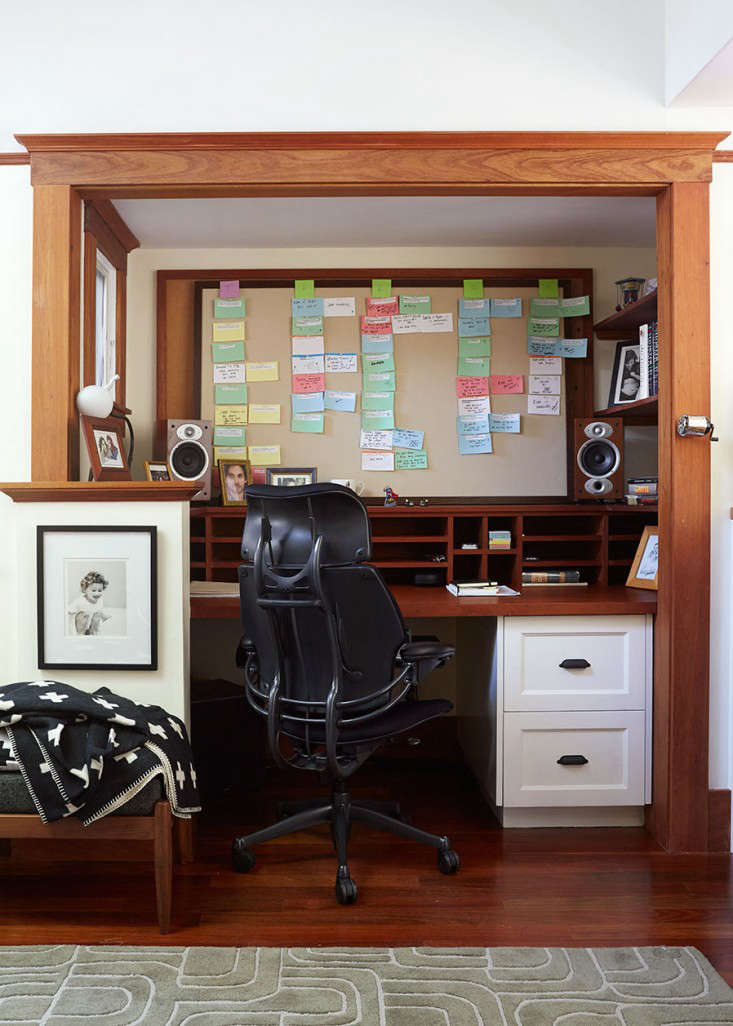 Waldman’s desk is not always this neat. “It gets really awful when I am in the thick of a book,” she says, adding that she is starting to think of a character who may become the protagonist of her next novel. “I’m thinking of her as a Saul Bellow-Nabokov combo. So I’ll buy dozens of biographies of them, in an almost talismanic way, to help me with her.”

What should be above Waldman’s desk is a window. “I like to look out when I work,” she says, “but the space was built for Michael, and he has to be boxed in so as not to be distracted.” 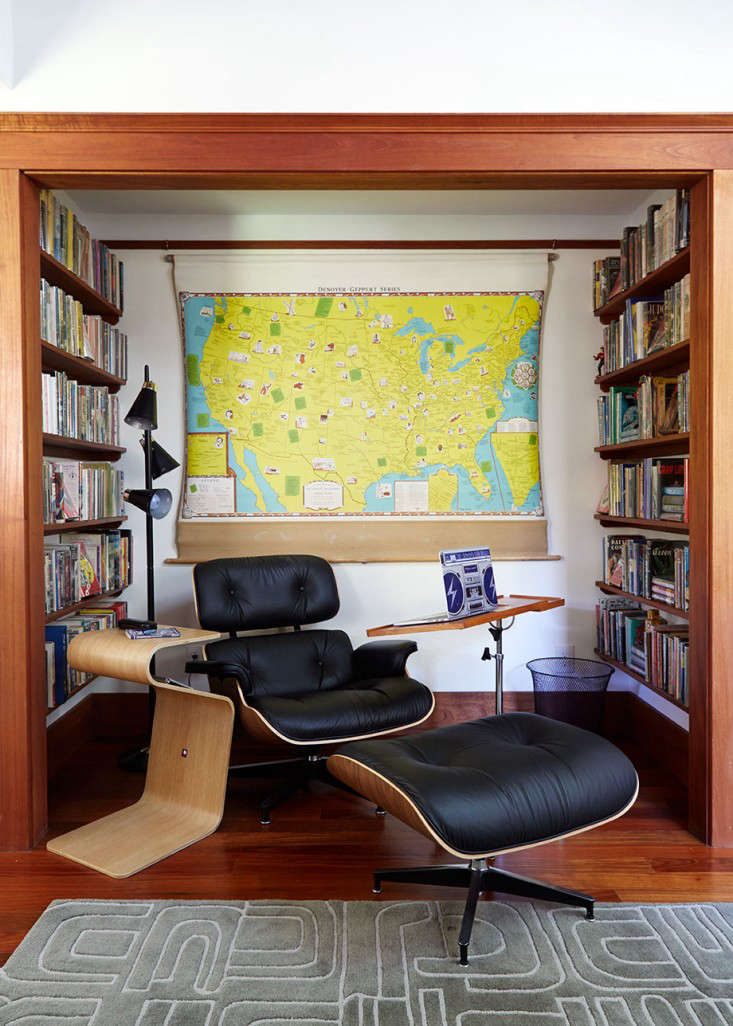 Above: Chabon writes in an Eames Lounge and Ottoman (he rocks when he works). “First, he had a desk, but then he moved over to the Eames chair, and that invalid swing arm laptop table he has now,” says Waldman. “It’s exactly like a dentist’s setup. He battles carpel tunnel syndrome, and this setup works for now.” 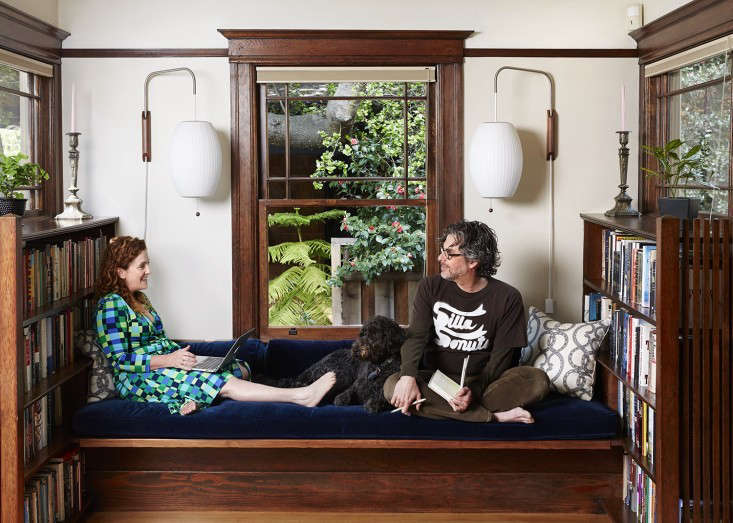 Above: For a look inside Ayelet Waldman and Michael Chabon’s house–more books included–see The Mysteries of Berkeley: A Literary Couple at Home on Remodelista.

How do other artists work? See their spaces in our Work Studio archives.