One would think that designing a contemporary garden in a newly renovated family home is a fairly straightforward proposition. But what if the home is an old games pavilion on the family estate–Haddon Hall, which is described by Simon Jenkins, journalist and chairman of the National Trust, as the most romantic house to survive from the Middle Ages?

Undaunted by the prospect of Haddon Hall’s centuries old Medieval architecture and grounds, where Jane Eyre (three versions), Elizabeth, Pride and Prejudice, and The Other Boleyn Girl were filmed, UK garden designer Arne Maynard “jumped at the chance of a blank canvas – one which is set so beautifully around ancient Medieval architecture.”

N.B.: While this garden is in the private gardens of the estate, Haddon Hall and its gardens in Derbyshire are open to the public. 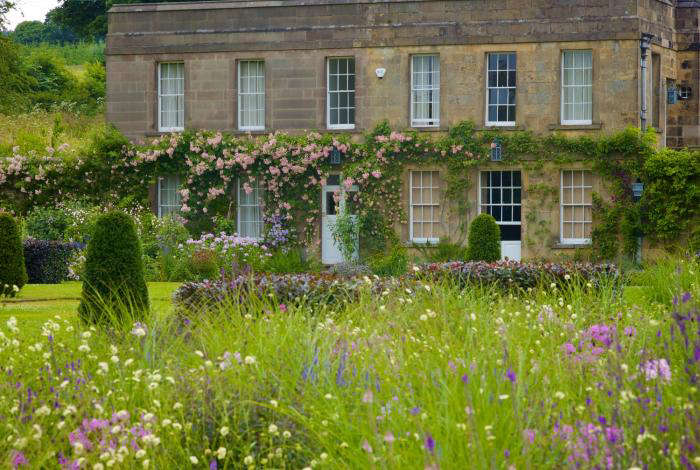 Above: “I first met Lord Edward in 2002 when he approached me to design the garden around his newly renovated home in the old games pavilion at his family estate in Derbyshire,” says Maynard. 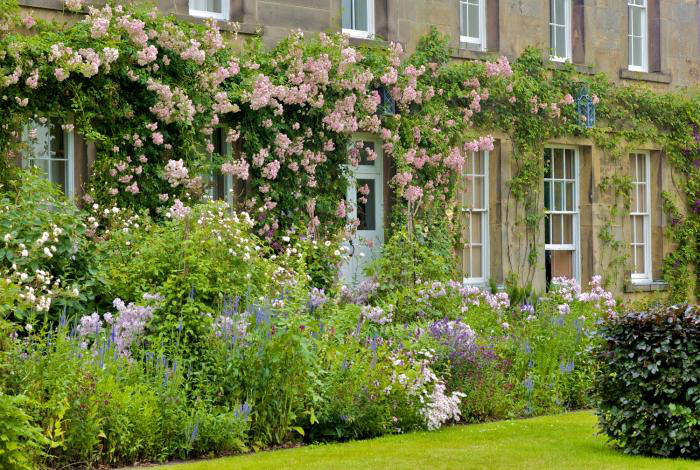 Above: Windows framed by roses rather than shutters. “We have used roses in abundance (Haddon Hall is famed for its roses) with more contemporary long grass borders which “˜hold hands’ with the long grass in the surrounding parkland,” says Maynard. 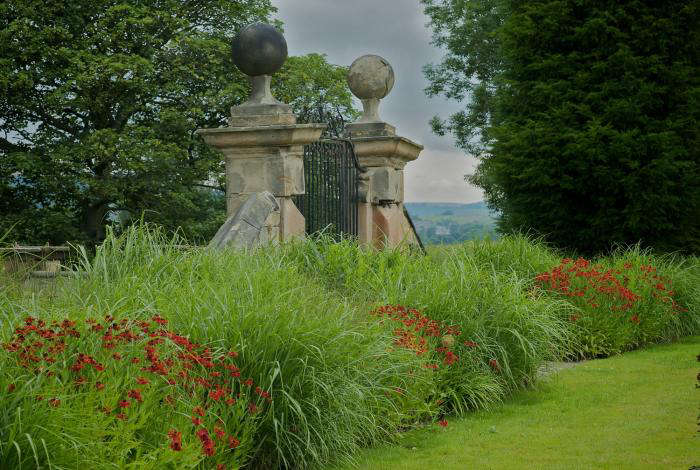 Above: Perennial beds rather than shrubs create a perimeter. 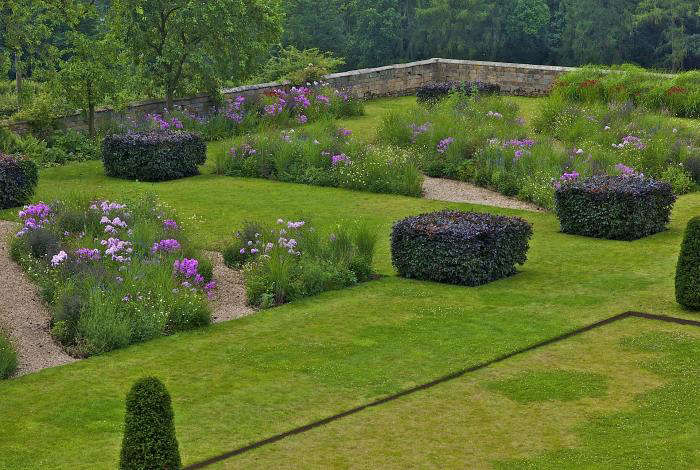 Above: “Faced with a blank lawn, a fruit tree and some overgrown yews, Lord Edward and I set about talking through the idea of restoring this area to its former use as a recreational space to be used for entertaining and dining,” says Maynard. “In former days, it would have been used as an area for bowls, croquet or lawn tennis so we were keen to retain an expanse of lawn.” 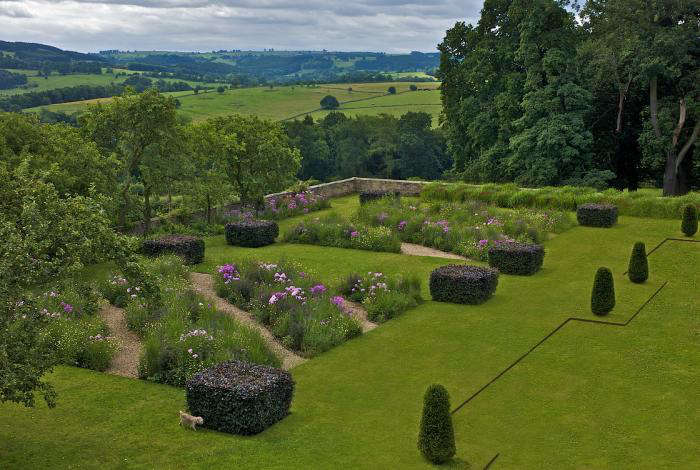 Above: “We designed the sunken lawn at Bowling Green to mirror the shape of the bowling green lawn of the Hall,” says Maynard. “It is an embossed lawn – a subtle watermark – which gives a new lease of life to what is essentially a very traditional space.” 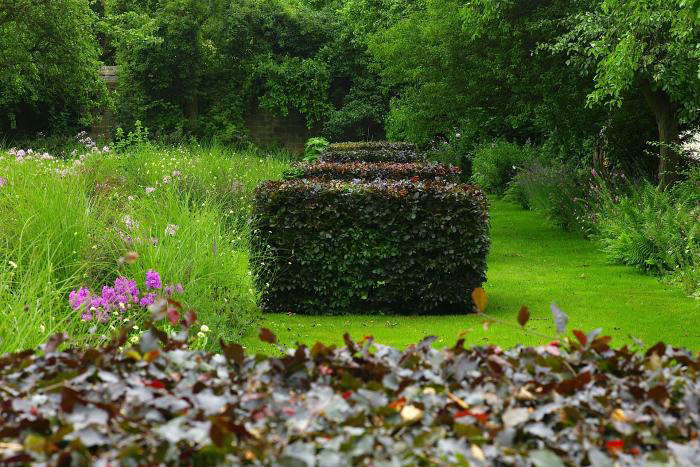 Above: “The topiary trees used in this garden are the same as those on the bowling terrace at the Hall, which again roots this garden in its surroundings,” says Maynard. “But not wanting to settle for a replication of the past, we have introduced some very contemporary planting in this garden – breathing life into what was a very traditional planting scheme.” 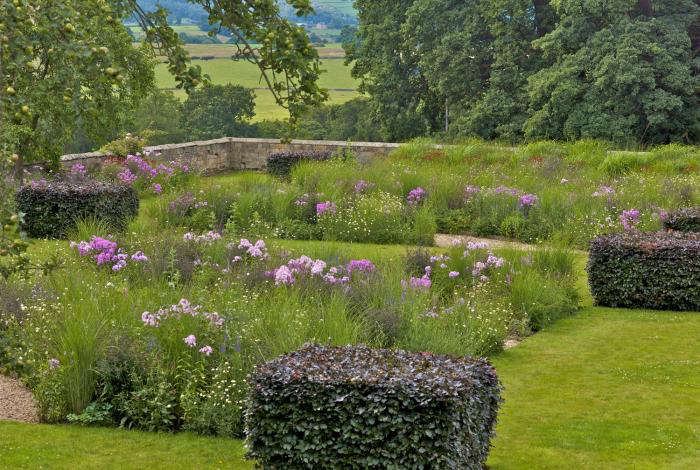 Above: “I wanted to pick up elements of the main gardens around the Hall to give this new garden a real sense of place,” says Maynard. 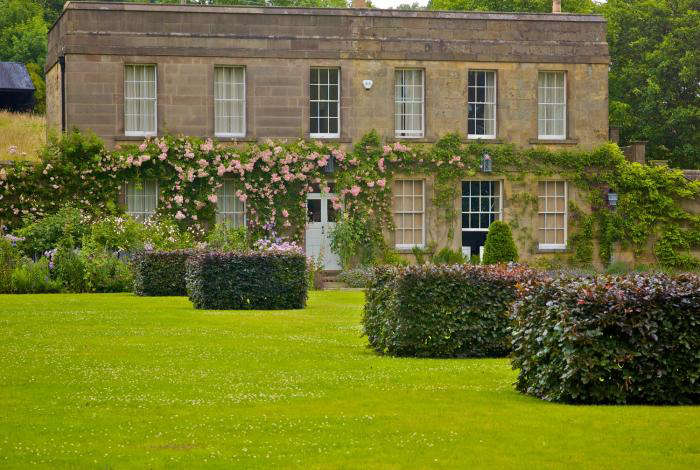 Above: “This garden is rooted in tradition but feels very contemporary with cubic shaped trees and long sweeping planted borders,” says Maynard. “But the combination feels entirely correct. It is now used by a young family for pleasure and entertaining restoring its original use perfectly.” 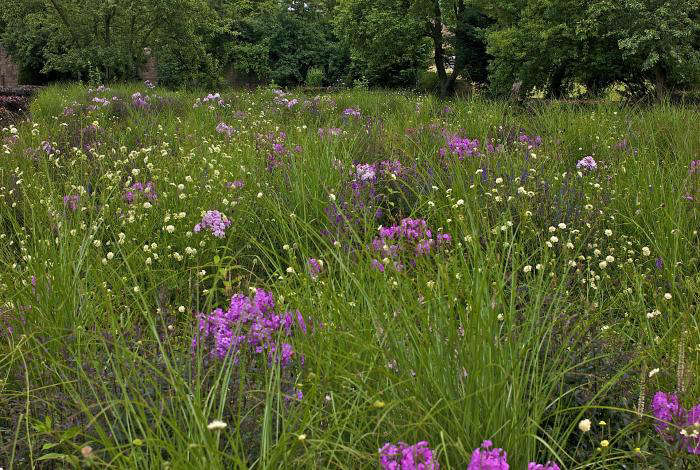 Above: A meadow of wildflowers.

For more, see the Oliver Gustav shop in Copenhagen, where garden meets antique.

This is an update of a post originally published October 3, 2012.

A Happening Shop in Venice Beach, Dedicated to Outdoor Living