We all have an idea about Greece and there is bound to be something ancient in it. Yet visiting can be so different from imagining. In landscape architect Thomas Doxiadis‘ version of Greece, new angles combine with ancient contours. The

40 acres of landscape and habitat he helped design on the island of Antiparos is what you would hope to find after dreaming about these islands in the Aegean Sea: 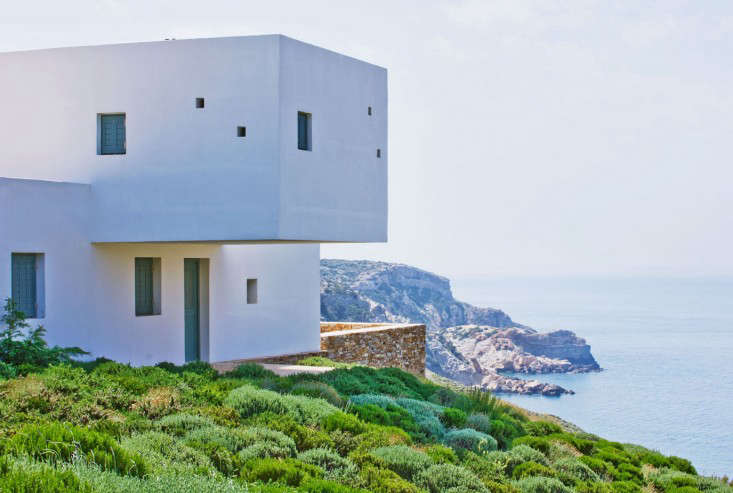 Above: When the Greek developer Iasson Tsakonas bought this section of Antiparos, he had a singular vision: minimum impact on the existing landscape, while making room for eight houses, each with pool and sea view. Though the local vegetation is ground-hugging, it was important that one building did not interrupt the view from another. Tsakonas called in landscape architect Thomas Doxiadis, which was a good move. 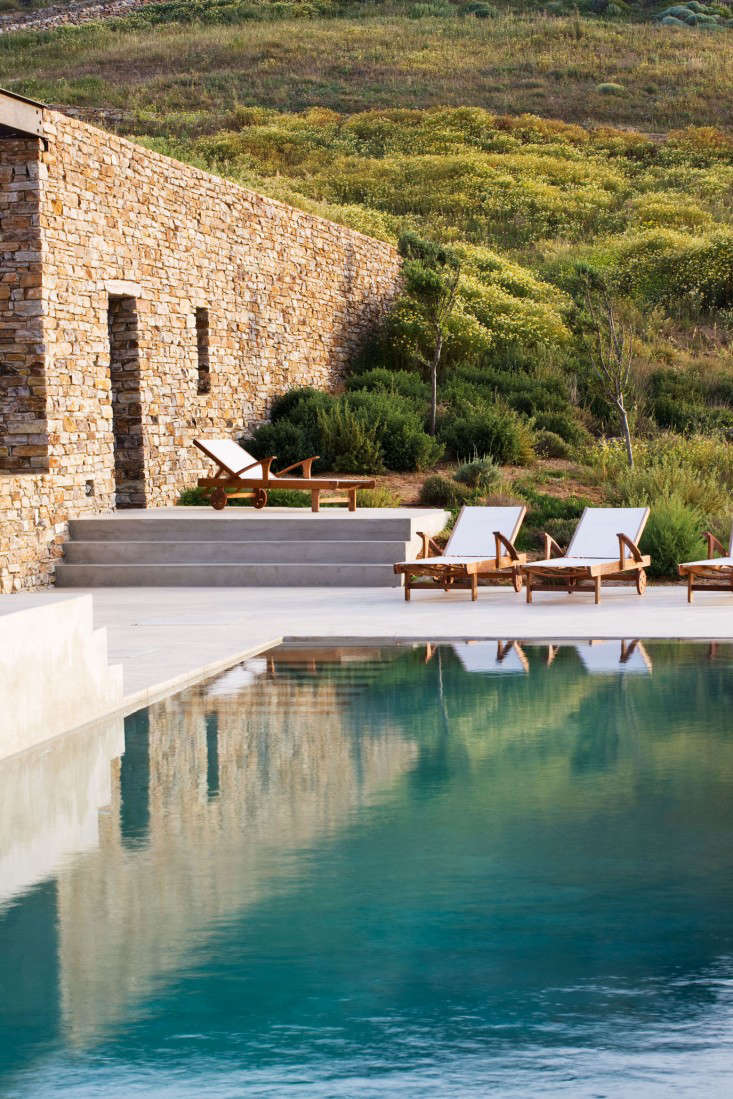 Above: Doxiadis teamed up with architect Terpsi Kremali for this project, and they brought in a group of talented young architects and designers, who worked on the 40-acre project as a whole. The local vernacular in housing is one-story dwellings made of local stone. Even though the scale and size is so much bigger here, the houses still seem to rise out of the earth. 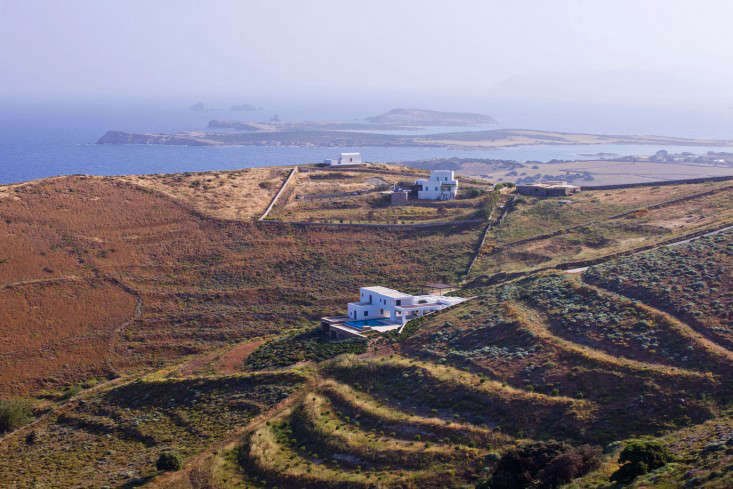 Above: To avoid destroying the local order of stone walls and vegetation in the buiding process, it was only permissable for machinery to move around on the footprint of the actual dwellings. Earth from the foundations was used to shore up and restore the terraces which had supported farming over the ages.

In her book Mediterranean Landscape Design ($44.54 from Amazon), Louisa Jones (with photographer Clive Nichols) brilliantly describes a movement, across southern Europe, of new visionaries who have been able to re-purpose land which has moved out of its traditional use. Particularly vulnerable are agricultural areas which just happen to have a marvelous view. 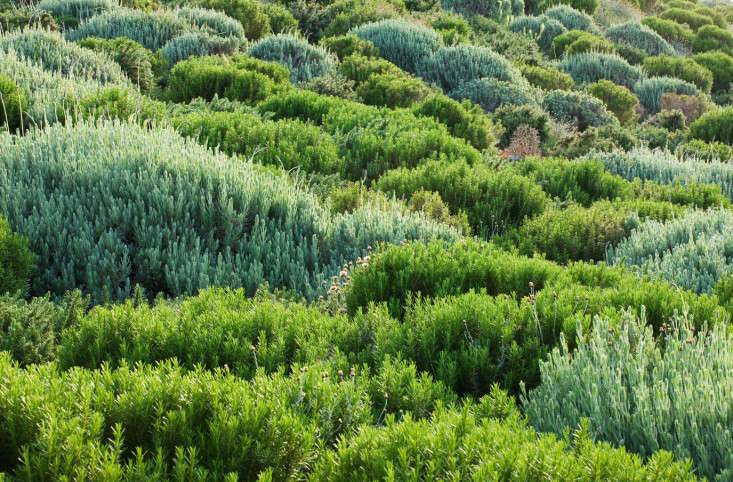 Above: “We were all in love with the landscape,” says Thomas Doxiadis in Mediterranean Landscape Design. This is the Greek phrygana, the natural state of these islands after millennia of grazing, forest clearance, and fires. The land is productive for growing lower down the slopes; higher up it is well-suited for grazing. The vegetation here is made up of the prickly Centaurea spinosa, Sarcopoterium spinosum, and pot marigold Calendula arvensis. 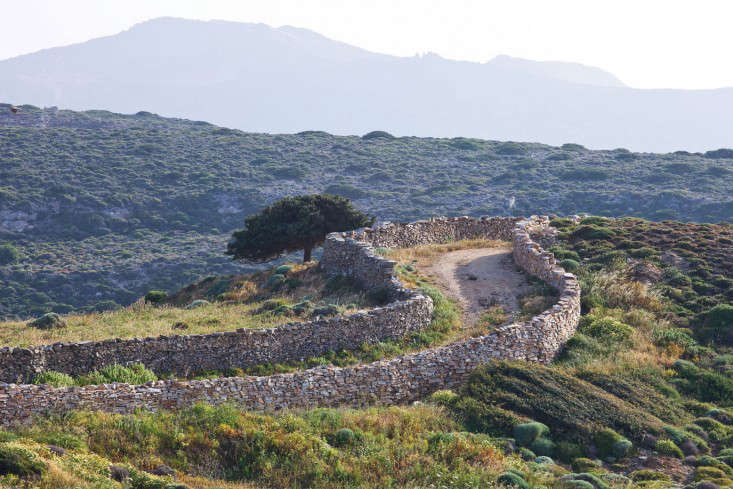 Above: Stone is integral to the terracing of this terrain and for enclosure. Individual roads leading to each house are actually new, though they blend in perfectly with the curves of the countryside. They remind us of how lovely roads can be. 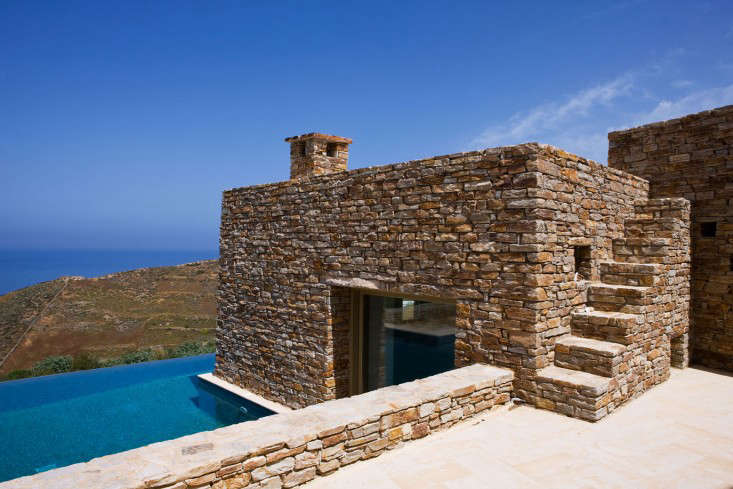 Above: The development is called Oliaris. Much stonework was called for, carried out by mainly Albanian craftsmen. 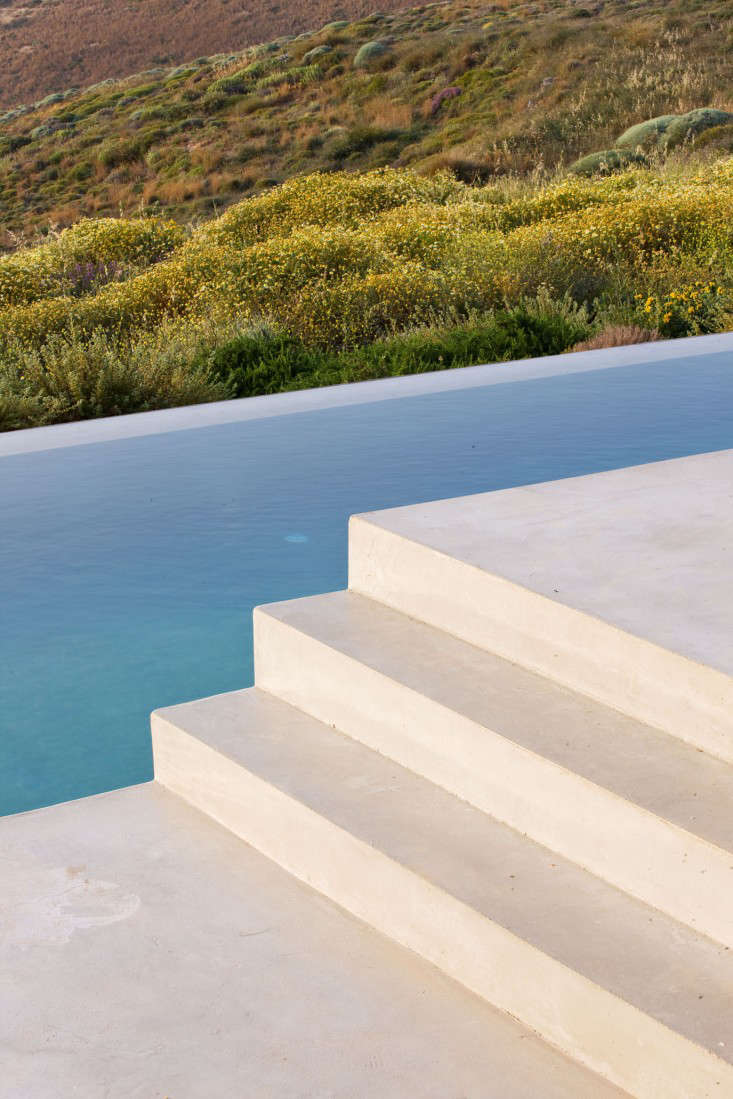 Above: Planting around the house is naturalistic in the most deliberate sense. The pattern of vegetation on the hilly slopes has been examined by Doxiadis’ team: groupings, drifts, and plant density seen in the surrounding landscape have been mimicked around Oliaris. “Nothing is arbitrary,” Thomas says. His studio has been propogating its own selected plant varieties for the site as they are not the kind of thing you’d pick up in the local garden center. 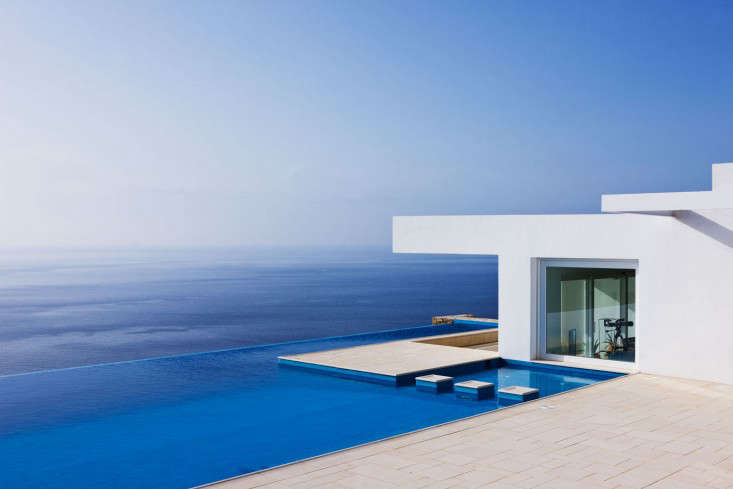 Above: The houses here shimmer into the background, whether that is of land or sea. Limestone complements the lines of the infinity pool shown here; the sea blue is the color of the shutters which are so often chosen around Greece, on white houses. This landscaping is as elemental as it gets.

Fancy a walk through prickly bushes of the Mediterranean? See Hike of the Week: Camino de Cavalls, Menorca.

Steal This Look: Beach Cottage on the Dutch Coast

The Garden Decoder: What Is ‘Dry Farming’?