Even before a renovation, a San Francisco property with a Dutch Colonial Revival-style house built in 1912 had significant assets: 5,000 square feet of garden space on a double-wide lot, and a 25-foot hill capped by striking city views. It had original San Francisco ship ballast cobblestones and English bluebells planted by the original owner.

But the property had needs, too. The hillside was eroding, the site was overgrown, and the garden’s lower level was poorly drained and perpetually soggy. Stone and brick pavers were crumbling, and nearby were higher houses with windows that could look right in.

Working closely with architect Hilary Bates, landscape architect Scott Lewis (a member of the Remodelista + Gardenista Architect/Designer Directory) transformed the backyard into two distinct zones: The lower level would be a refined, rectilinear patio garden for entertaining and daily use, and the lushly planted hillside would feel wild and informal. 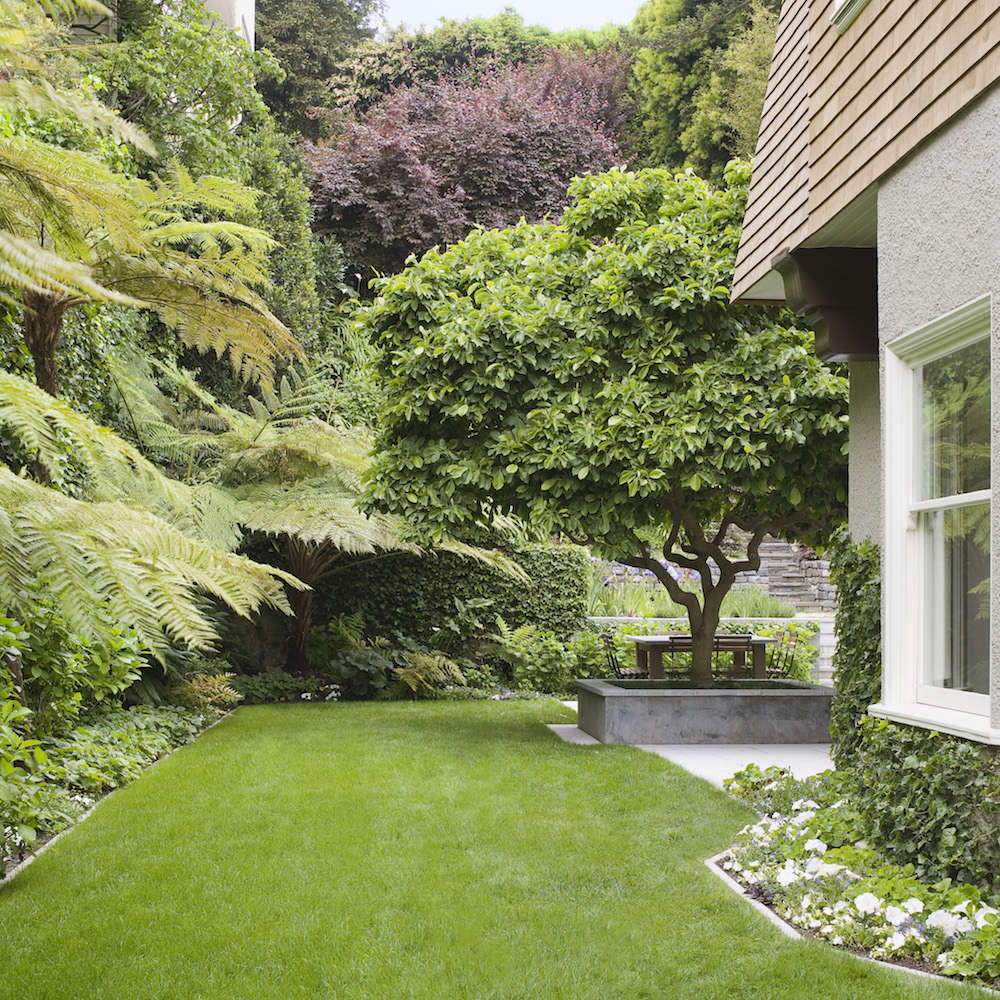 Above: At the project’s outset, the entry to the house was located on the street and had no privacy. So the architect moved the entrance to the side of the house, and guests now skirt the clean lines of the garden on their way to the front door. 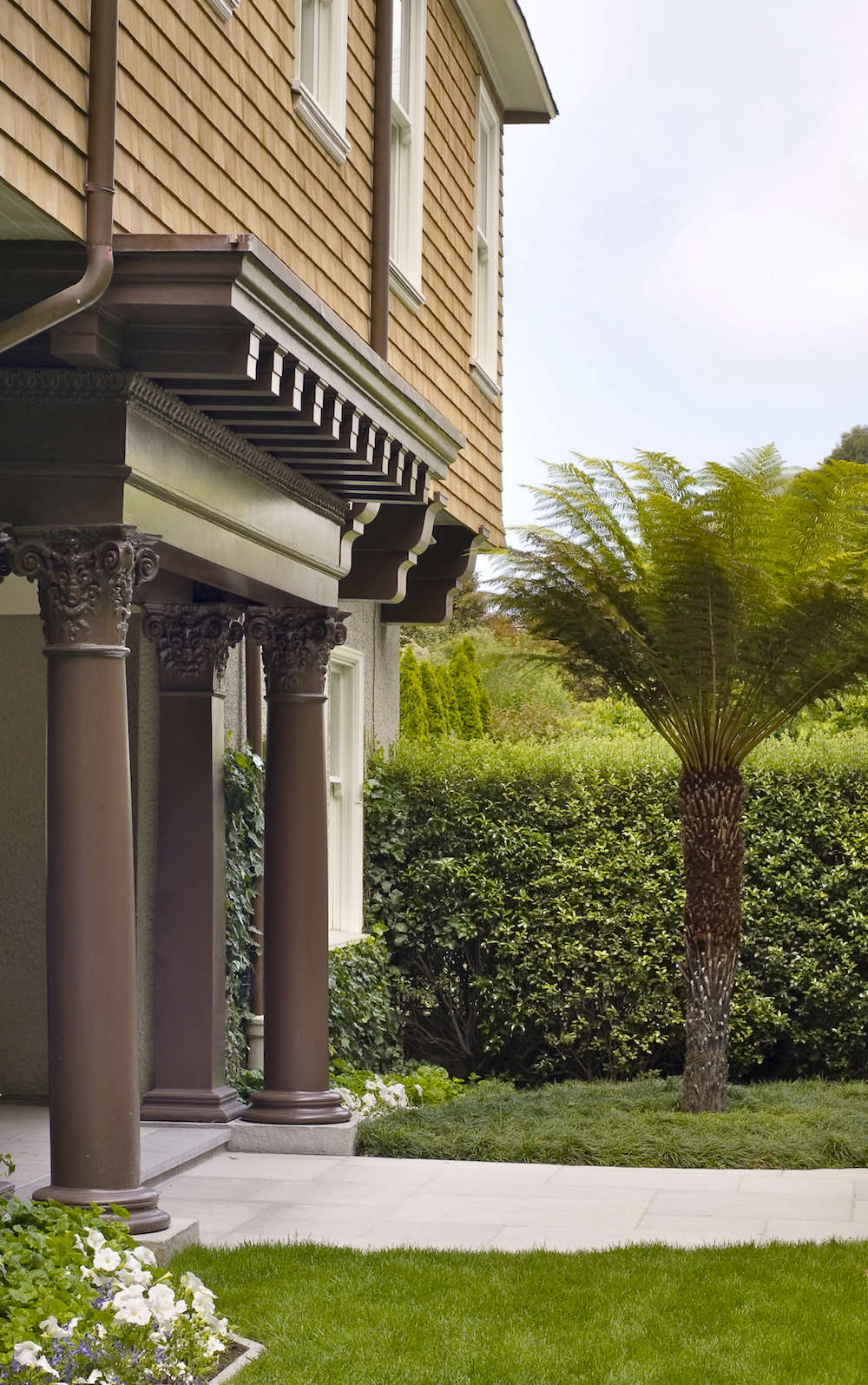 Above: The newly located entry, graced by a Tasmanian tree fern. 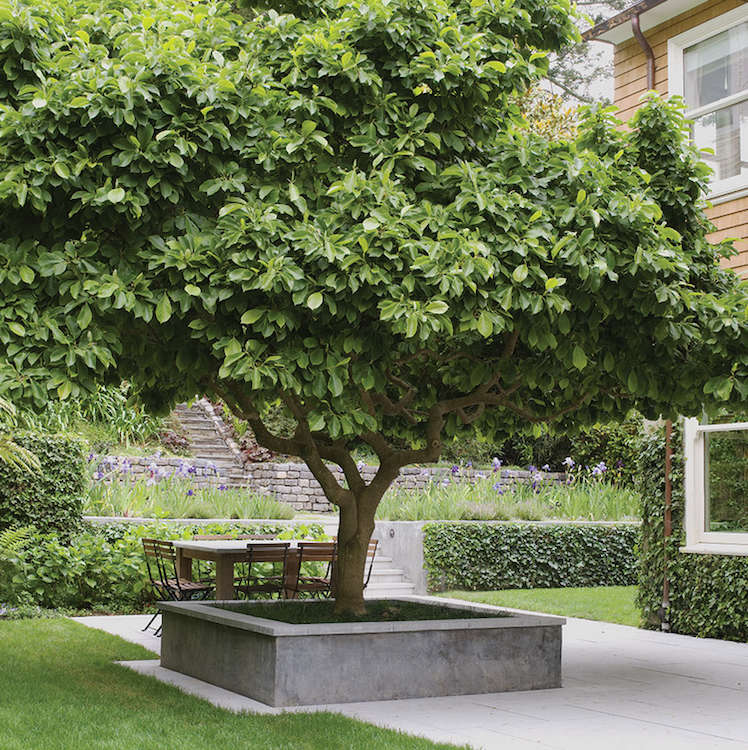 Above: The focal point of the lower garden is a saucer magnolia that the owners originally wanted to remove; its roots were in poor health, and the bricks circling it were crumbling. But Lewis argued in the magnolia’s favor and rejuvenated the roots, salvaged the bricks, and designed a stucco and stone planter to contain it. The new Flavigny limestone patio is permeable, allowing air and water to reach the magnolia’s root zone.

To solve the issue of poor soil drainage, Lewis supervised pruning, plant removal, and soil improvement. Rainwater on this level is now directed toward the planting beds at the perimeter of the garden. 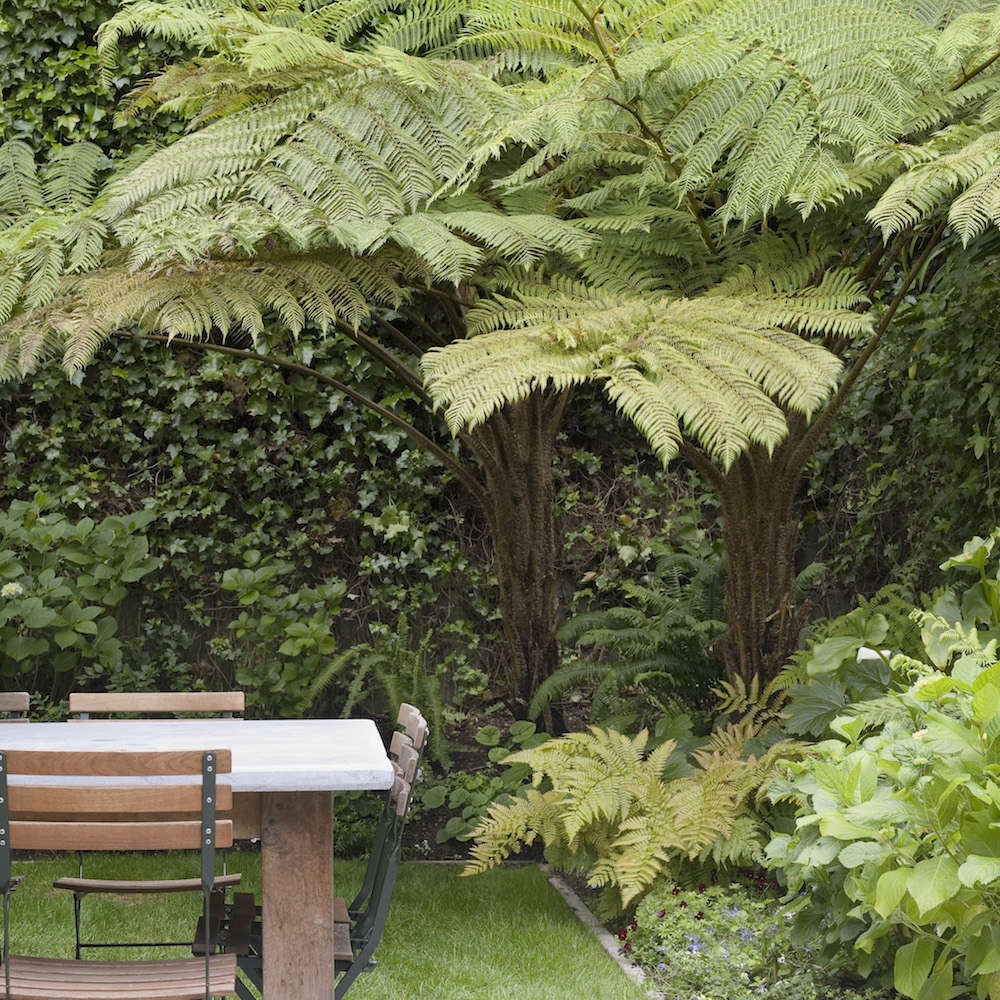 Above: A dense mix of plants that thrive in partial shade—including Australian tree ferns, Indian laurel figs, and rhododendrons—were transplanted from elsewhere on the property to provide privacy from the neighbors. 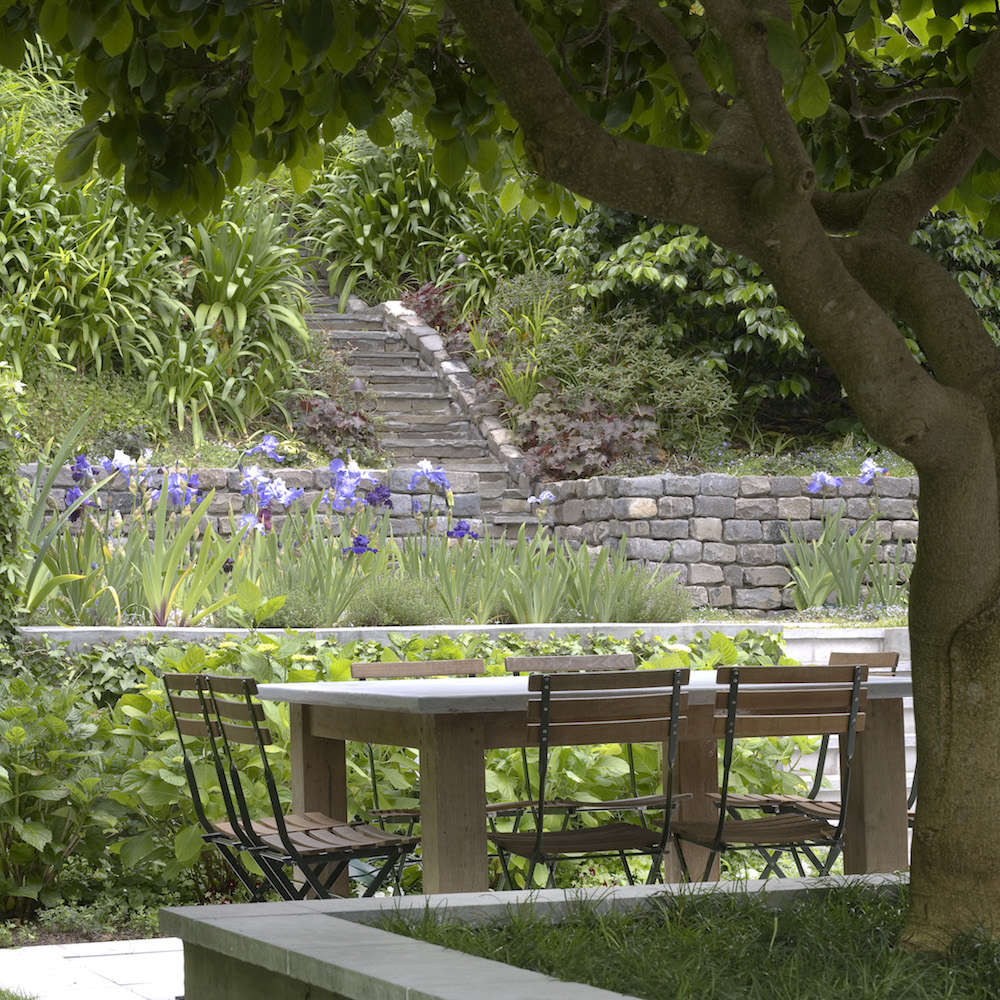 Above: Behind the outdoor table, a row of relocated hydrangeas grows in front of a retaining wall. Bearded irises mark the transition from the minimal lower terrace to the wilder hillside landscape above. The sunniest spot in the garden, this terrace is devoted to cutting flowers (including the irises and English bluebells) plus edibles such as rosemary and espaliered lemons. 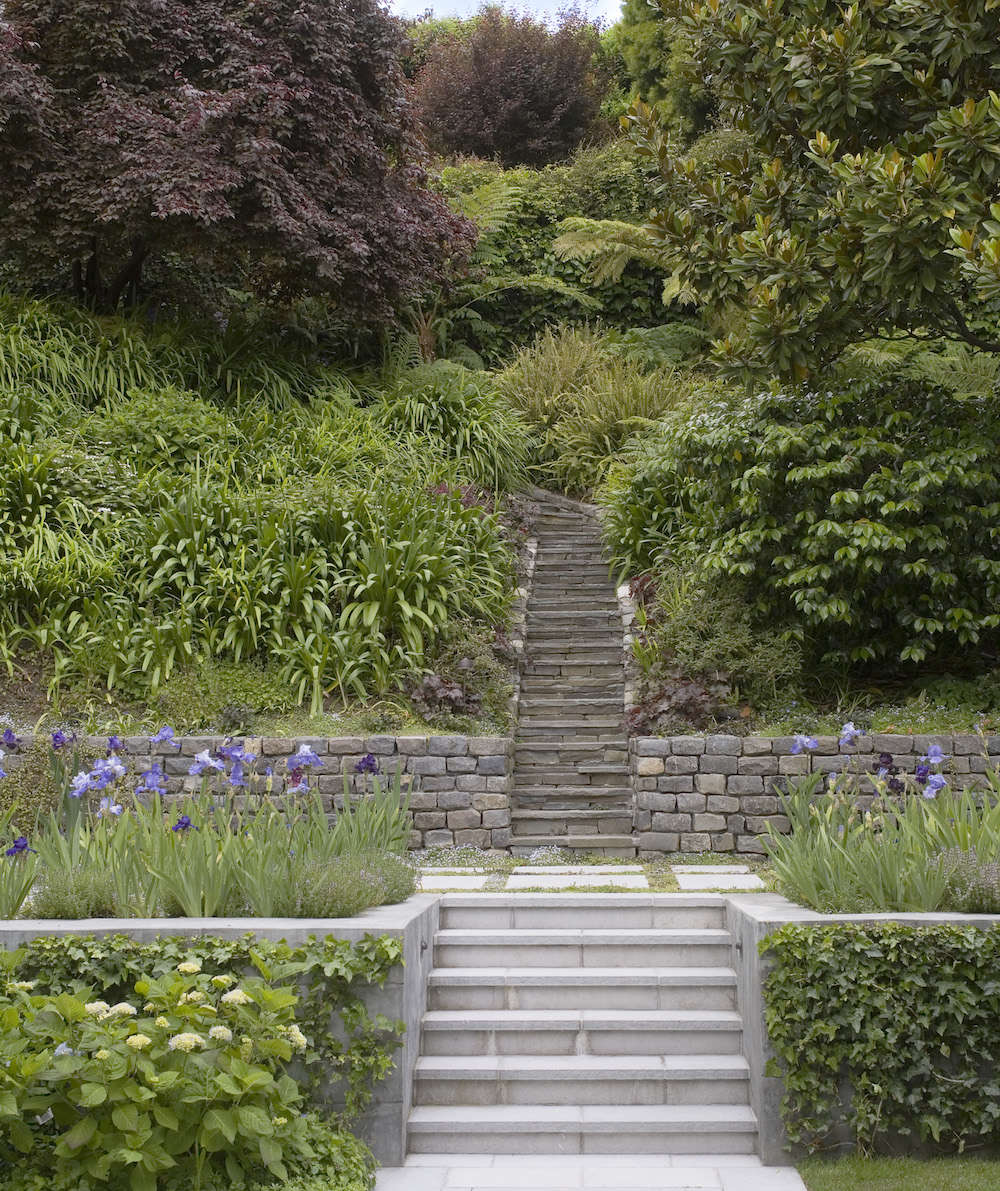 Above: The retaining wall bordering the upper garden is made of the original San Francisco cobblestone. At this level, the canopy is dominated by a Newport purple leaf plum tree, Australian tree ferns, and rhododendrons. 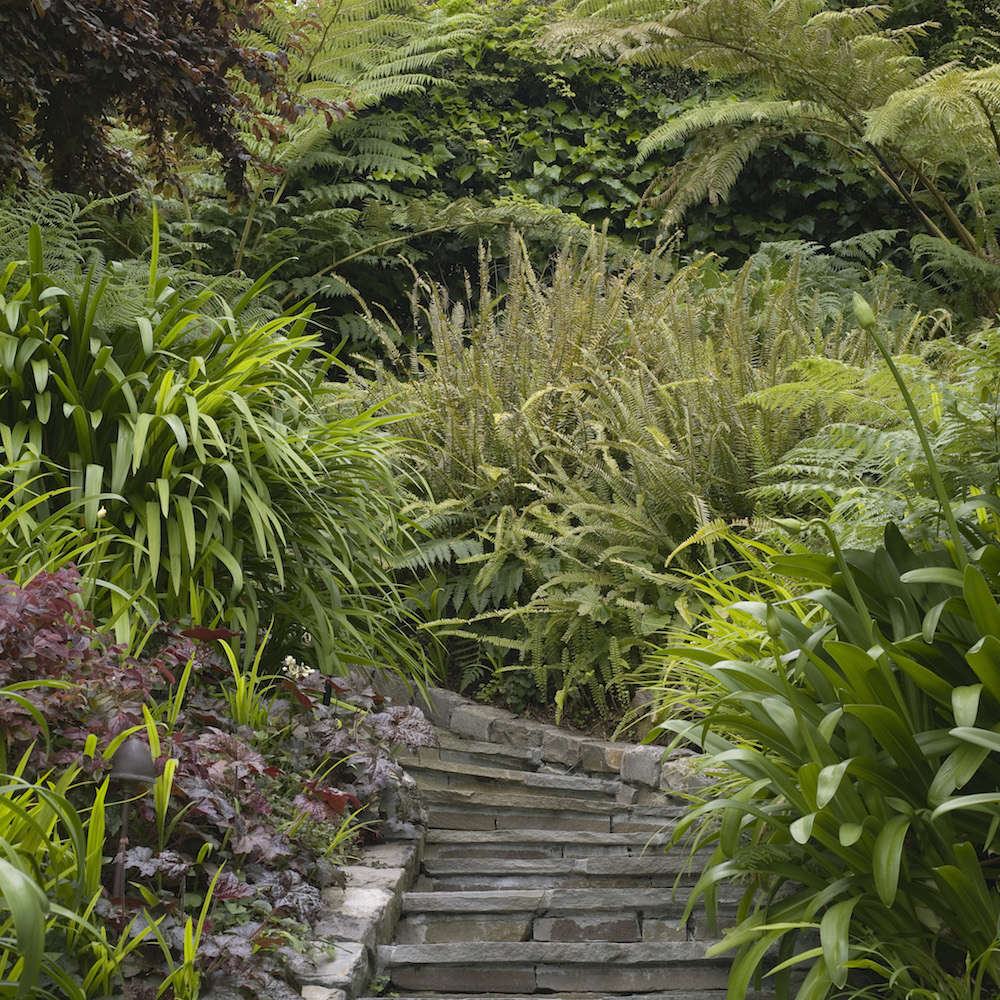 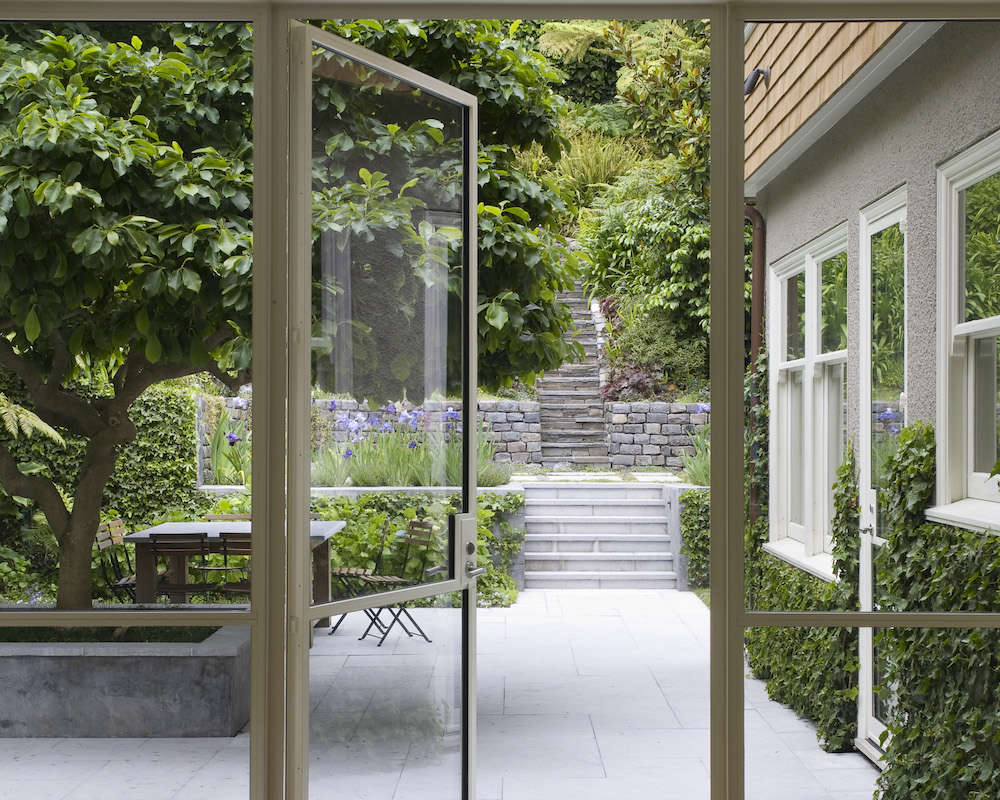 Above: Architect Hilary Bates redesigned the rooms bordering the backyard to maximize garden views and to let in more light. The extra-large patio limestone slabs are light gray, which Lewis says “reflects light into the lower rooms of the house—important for foggy San Francisco.” To emphasize the garden as an extension of the living space, the new garden stairs were designed to align with new stainless steel doors and windows off the dining room. 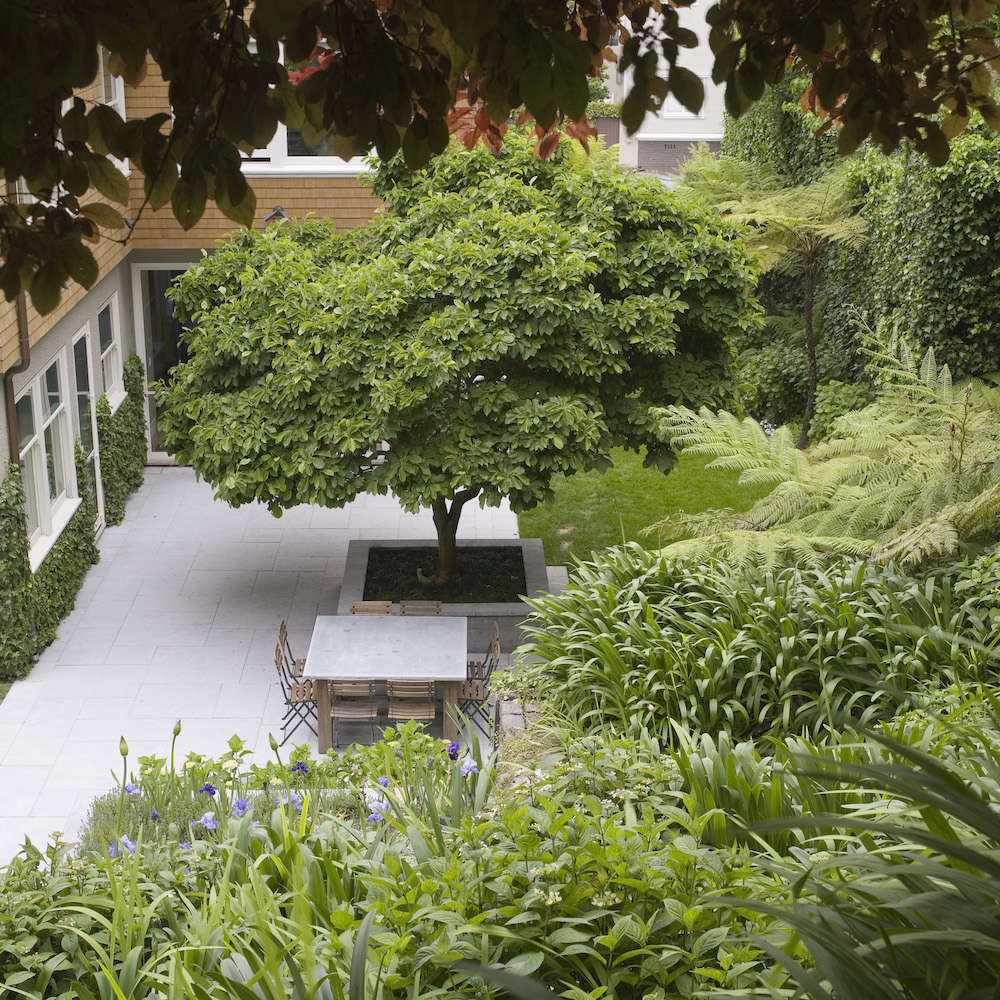 Above: Though not pictured, trails criss-cross the hillside garden and meet the main path at several landings. At the top of the hill, visitors are rewarded with an overlook made of repurposed stone. 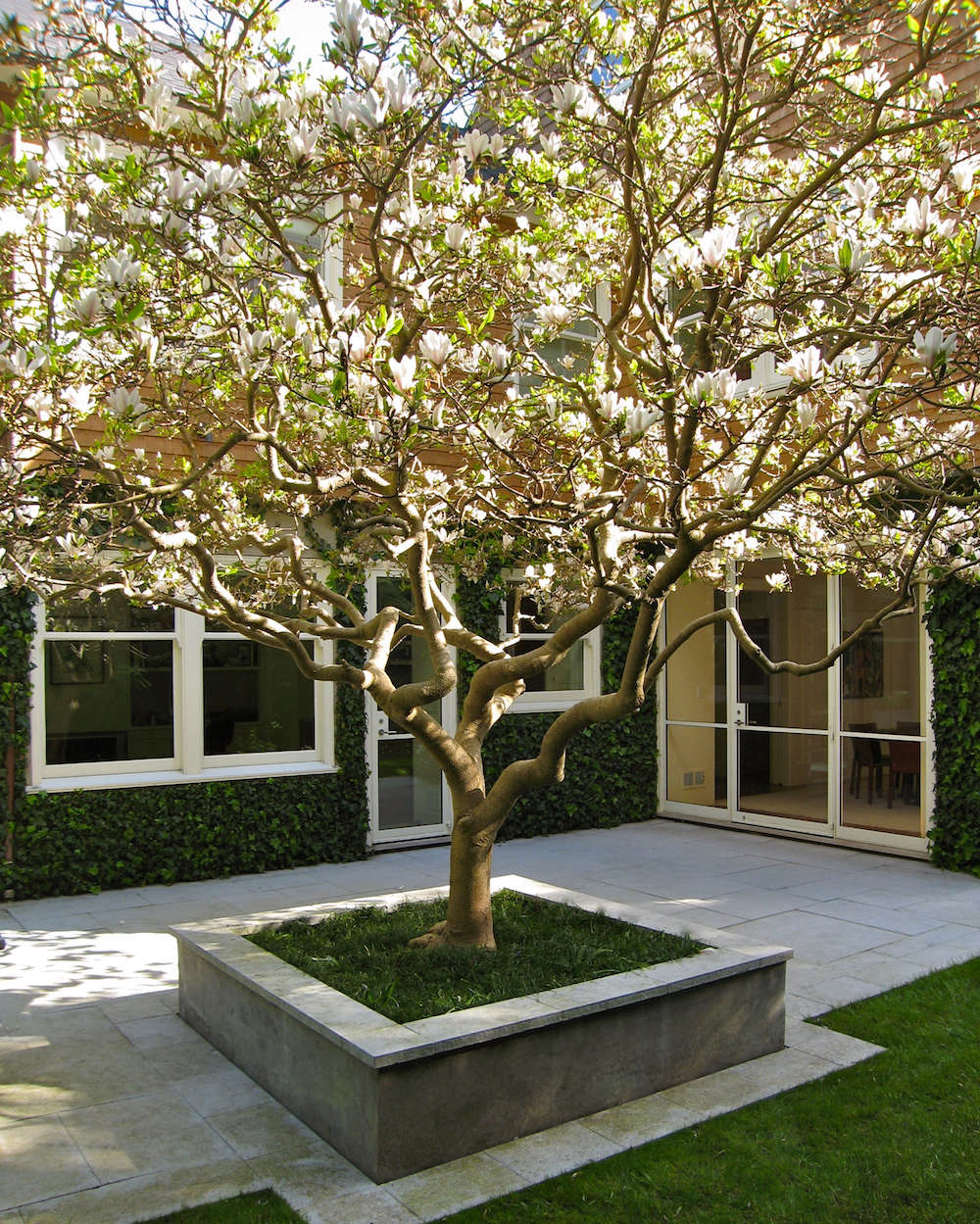 Above: The star magnolia in bloom in spring. “The magnolia tree seen out the windows provides changing visual interest even in winter, when its branches make for an intertwined sculpture,” said Lewis.

For more from Scott Lewis, see Vineyard Haven: A Napa Valley Garden That Belongs to the Land and Scott Lewis Turns a Small SF Backyard Into an Urban Oasis.