For several years B.D. (before dog), I lived in oblivion that the dense eucalyptus forest that sits at the top of my street was anything more than a collection of tall trees. Then came Olive, our family dog.

Most of my favorite hikes have been discovered because of Olive. I was certain that, somehow, her being limited to the paved sidewalks of San Francisco was not OK. I felt guilty that her paws were more familiar with concrete than with dirt. After Dog, I discovered that collection of trees, Mount Sutro Forest, held a maze of hiking trails that weaves through the dense 80-acre forest. A hidden gem in the city.

Photography by Janet Hall except where noted. 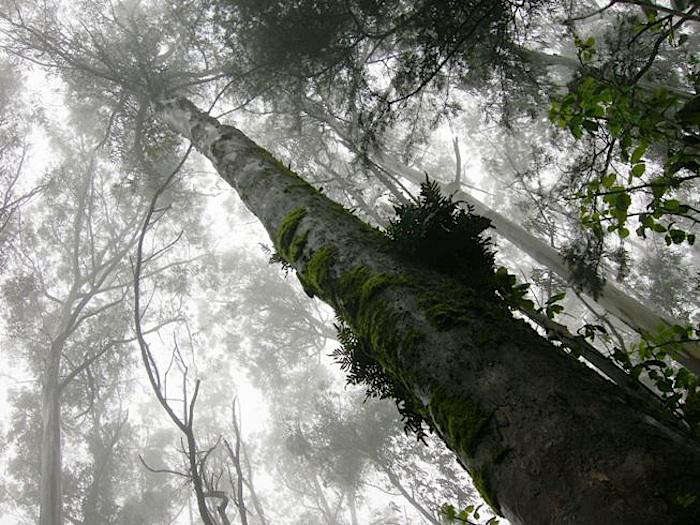 Above: The 900-foot high Mount Sutro is located on the west side of San Francisco above Cole Valley in the middle of San Francisco’s fog belt. Mount Sutro forest is dominated by 100- to 200-foot-tall blue gum eucalyptus trees that capture the fog and accompanying moisture, keeping the forest green and moist year round. Mud-friendly shoes are a must. Image via Mount Sutro Forest. 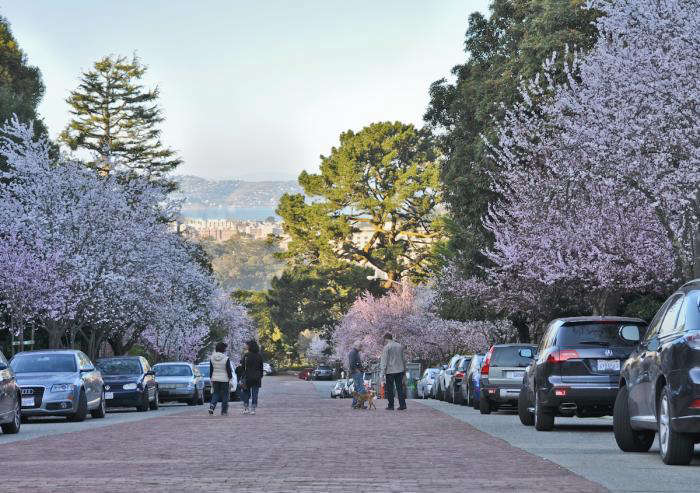 Above: My favorite entrance to the forest is at the top of Edgewood Avenue, a picturesque redbrick street. On a recent sunny day, I enjoyed the spring blossoms that lined the street. Yes, it was February (sorry to those not in Northern California). 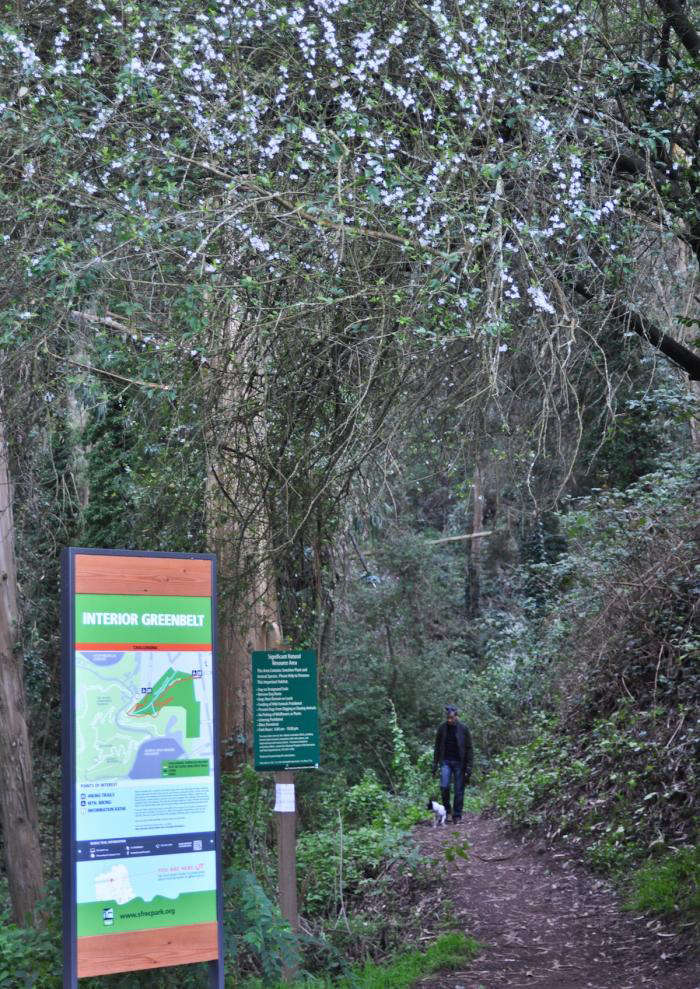 Above: The trail entrance at the top of Edgewood Street. Luckily for Olive, dogs are allowed (on leash). 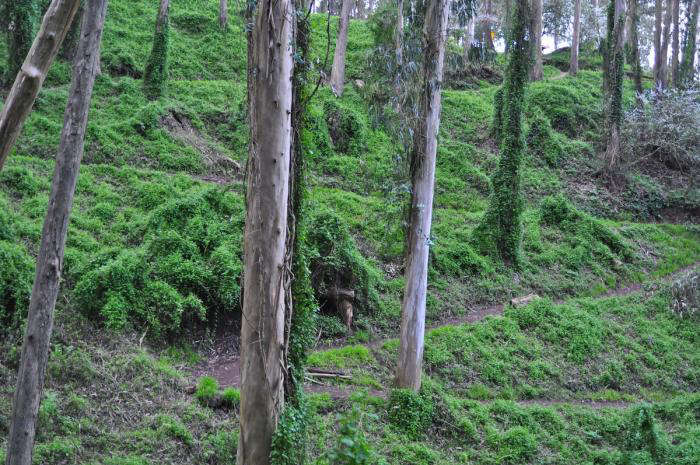 Above: The trail winds its way through the dense and vibrant green understory of ivy and ferns. It feels wonderfully wild and untamed, a stark contrast to the city outside.

While I don’t have the eye or the patience for birding, those who do are in luck. The forest is habitat for a number of bird species including Great Horned Owls and various woodpeckers. 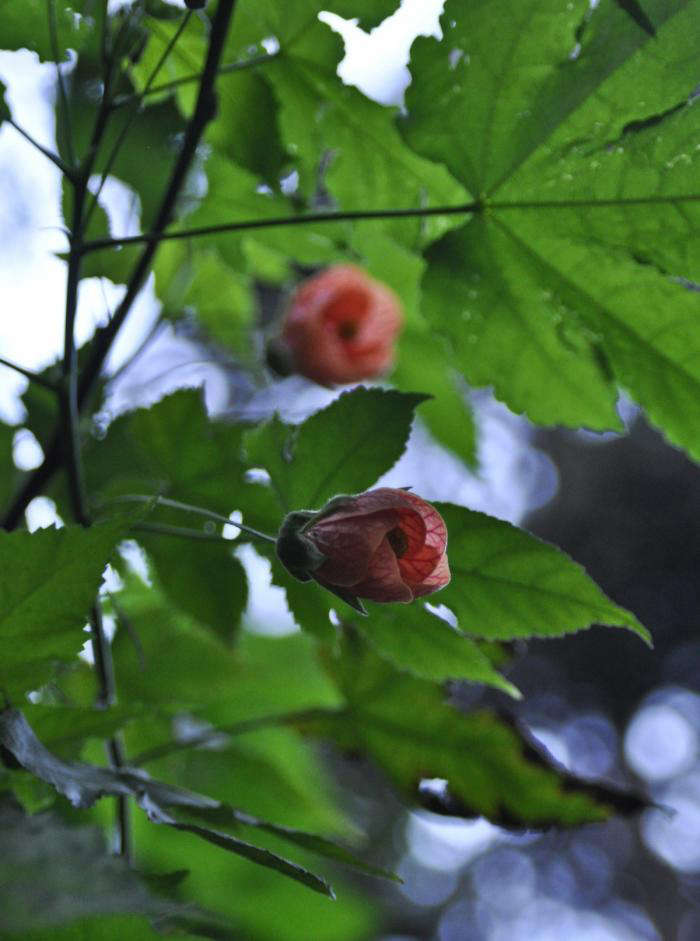 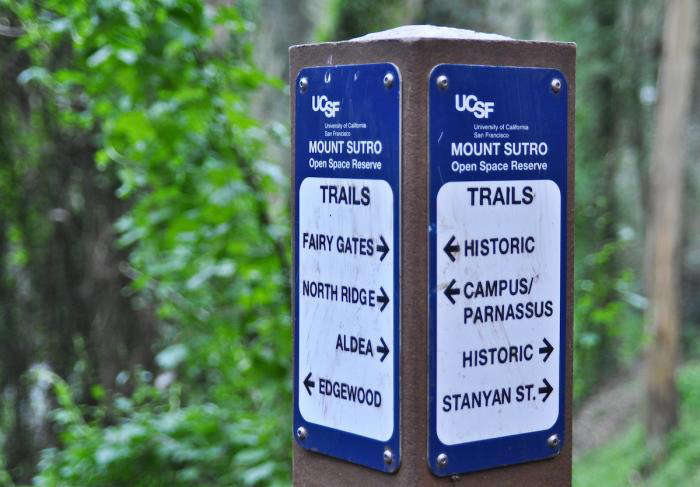 Above: Much of the mountain is owned by the University of California. The forest adjoins the back of the UCSF Medical Center Parnassus campus. Sixty-one of the 80 acres were set aside as the Mount Sutro Open Space Reserve, resulting in trails being upgraded, clearly signed, and maintained. 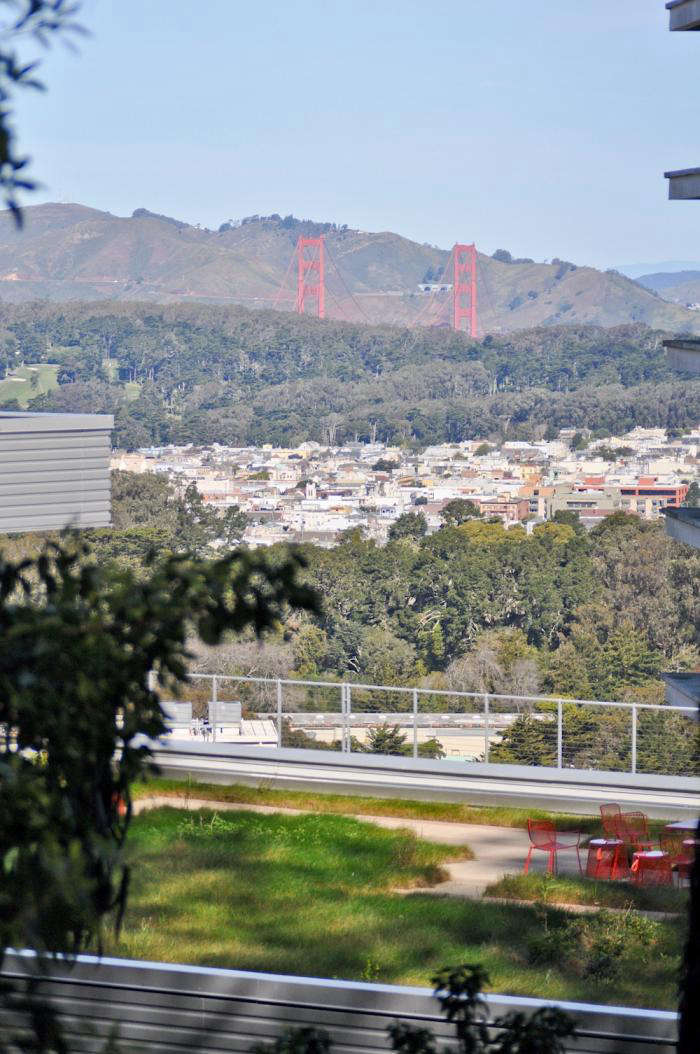 Above: From the lower historic trail, there is a view over the green roof of the new UCSF stem cell research building to the Golden Gate Bridge. Architecture buffs can get a closer look at the Raphael Viñoly-designed green building by turning down Medical Center Way from the historic trail (see map). 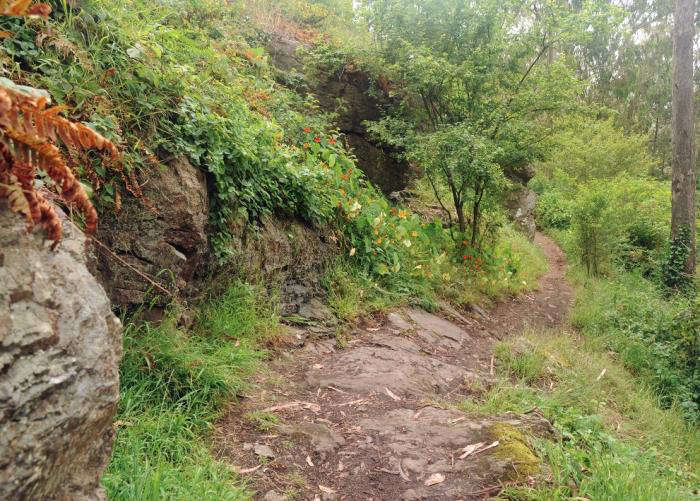 Above: Outcroppings of chert line some of the trails. 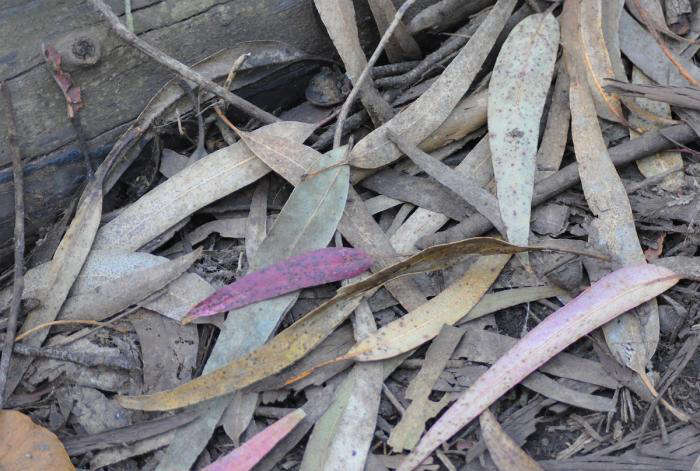 Above: I love the carpet of fallen eucalyptus leaves (not to mention the scent) on the trails. 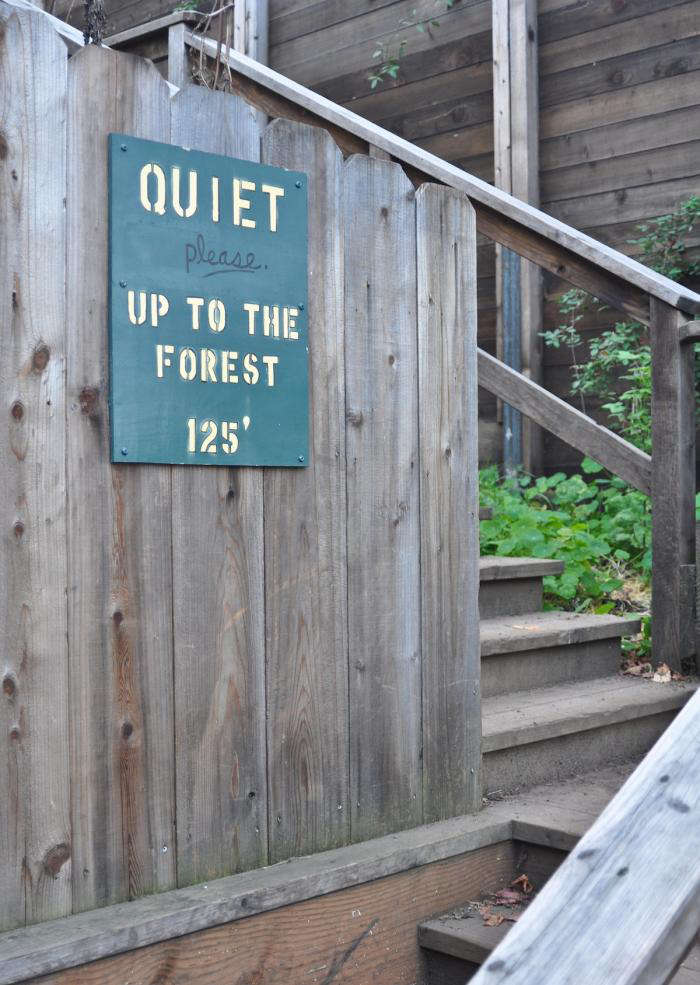 Above: The entrance at Stanyan and 17th streets is nestled between homes on a residential street. The staircase and trail can easily be mistaken as a private entrance. Fortunately, a sign has recently been put in front to make it easier to find. 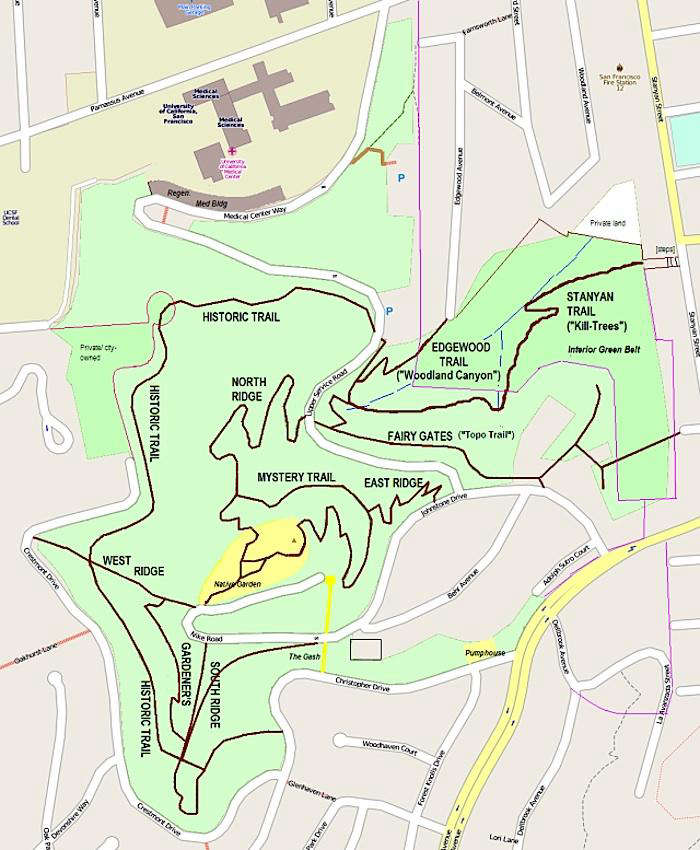 Above: While the trails are marked, the towering eucalyptus look alike. Bring a trail map (via Open Street Map). 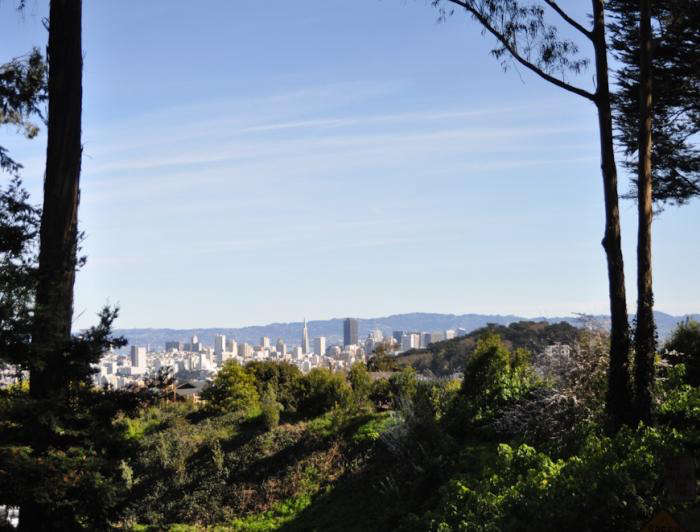 Above: Just when you forget that you are near civilization, a panorama of the San Francisco skyline appears. 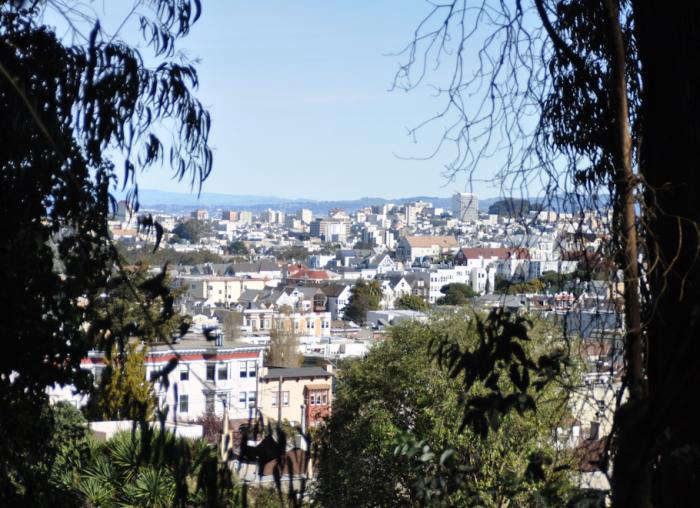 Above: A view through the trees to neighboring Cole Valley. 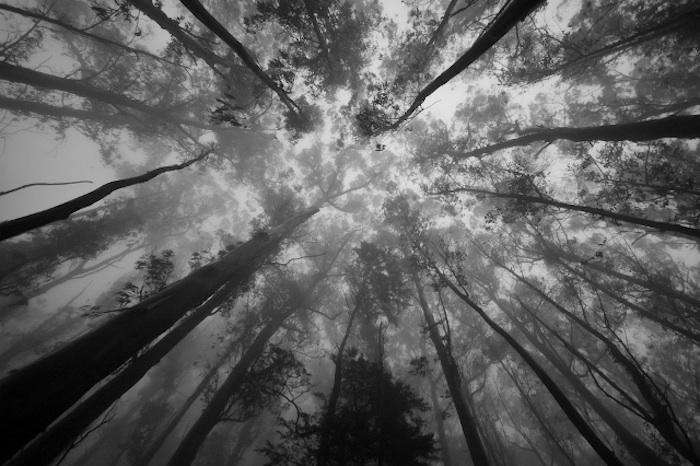 Above: For a cloud forest experience, enter the forest on a foggy San Francisco summer day. Dramatic and ethereal. Image by Paul Hudson via Mount Sutro Forest.

Another Bay area favorite is the Hike to Stinson Beach. Bring a picnic.

The Week in Review: 10 Bombshells to Share at a Dinner Party