Actually, make that ten miles. It’s supposed to be a seven-mile trek from Mill Valley to Stinson Beach and that’s how far I told my friends from LA that we were going to walk. Eight of us set out one sunny morning last week with deli sandwiches and hopes of seeing the Pacific Ocean by early afternoon. But there were a few detours.

“I hope this isn’t going to take all day,” my husband said.

“Of course not,” I assured him.

(N.B.: Do you have a favorite winter hike? Send photos to [email protected] and we may feature your story in an upcoming “Hike of the Week” post.) 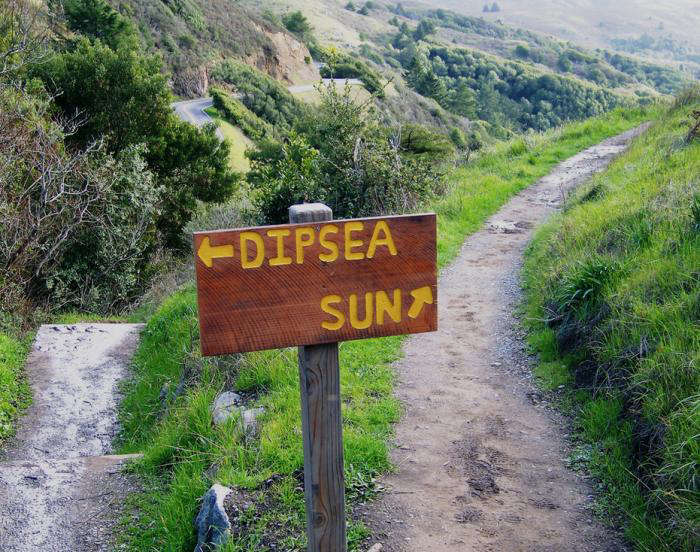 Our friends from LA are hardy–actually, they’re transplanted New Yorkers, so they’re used to walking–and we made it to this trail marker, along the Panoramic Highway on the ridge above Mill Valley, in record time. Photo by Richard Johnstone via Flickr.

“How much farther?” my husband asked.

If we had turned left to take the Dipsea Trail–the same route that long-distance runners follow every year in the locally famous Dipsea Race–the answer to his question would have been “not too much farther.” From here, the Dipsea Trail dips into Muir Woods, where you get to see the towering redwoods without having to deal with the tourist traffic in the parking lot, and then heads straight to Stinson Beach.

But I prefer the Sun Trail. 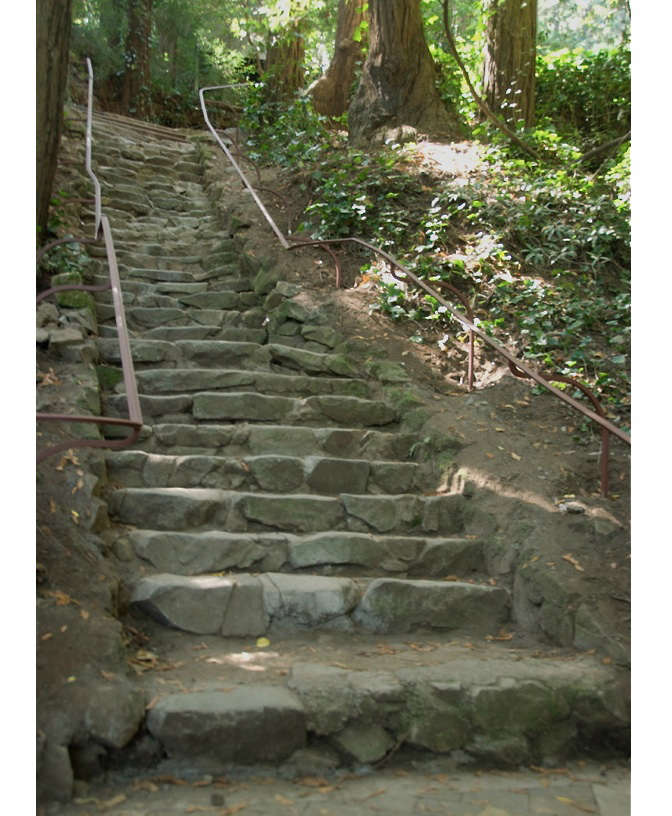 But I’m getting ahead of the story. Backtracking, here’s a look at the start of the hike–the Dipsea Stairs. There are 688 of them to climb to get from downtown Mill Valley to the trails. Photograph via Dipsea.

I know it looks horrible. Even if you are a resident of Mill Valley and consider the Dipsea Stairs and the Dipsea Race and the Dipsea Trail to be sacred national treasures (a prerequisite of living here), the stairs look daunting. I think the reason we all went up them, instead of turning around and heading back to civilization to spend the afternoon at the Beerworks, was simple: if you make it to the top, it means you are immortal. For the rest of the day, you think to yourself with quiet satisfaction, “Well, I guess I’m going to live forever.” 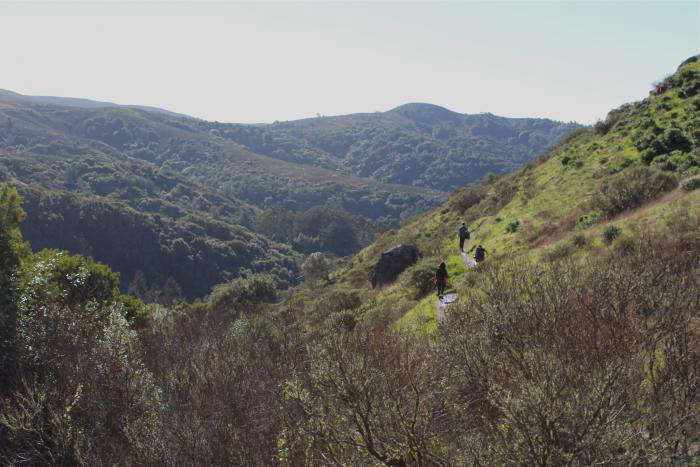 OK, back to the Sun Trail. The reason I like it best is because of the amazing views. In the distance, ahead of me, you can see my friends walking along the trail. 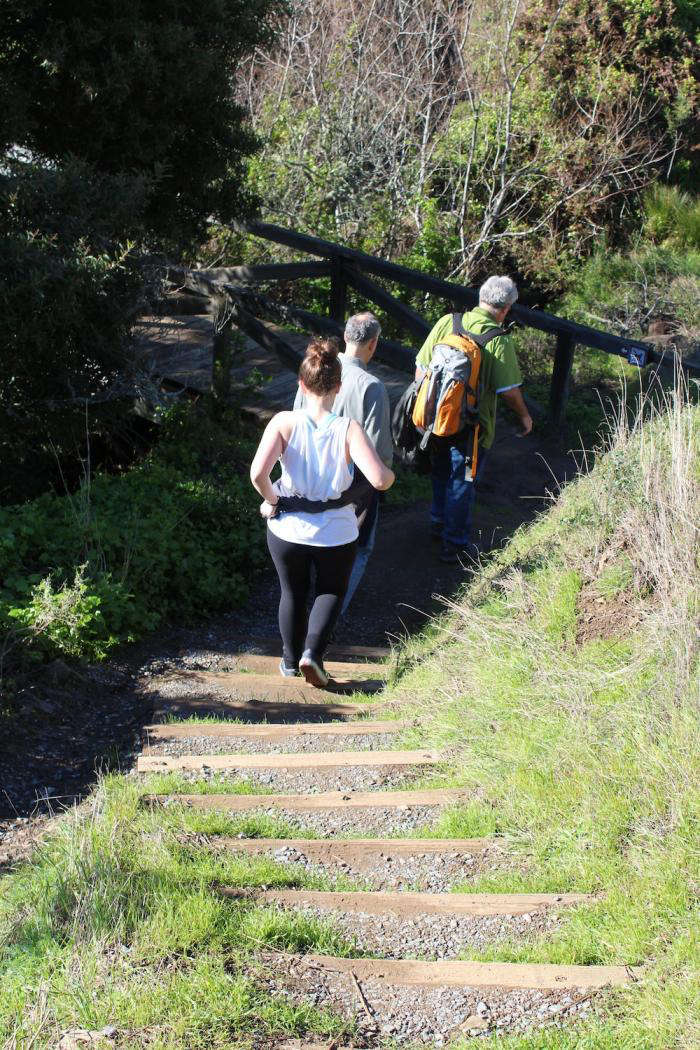 Above: In December, after the rainy season starts, the trails are pretty green. Two months earlier, the grass would have been dry and wheat-colored. 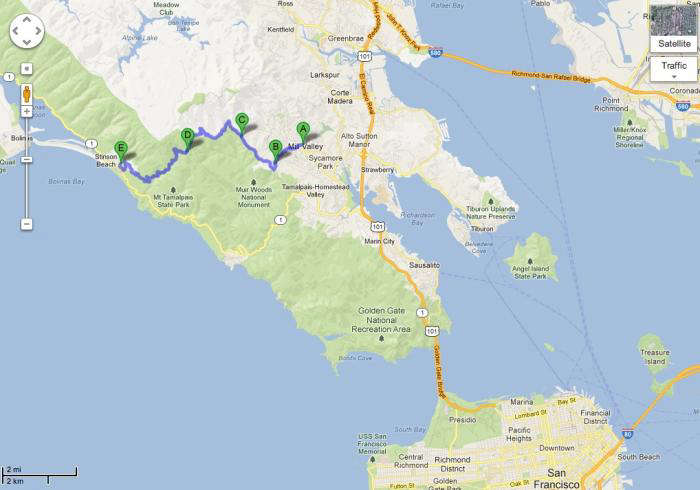 Above: This is a rough approximation of our route via Google Maps. At this point, after about an hour and a half of hiking (including a stop to eat some sandwiches) we were between Points B and C. My husband wondered if we were almost there, and I said yes.

N.B.: Have you ever hiked this same route (or a variation)? 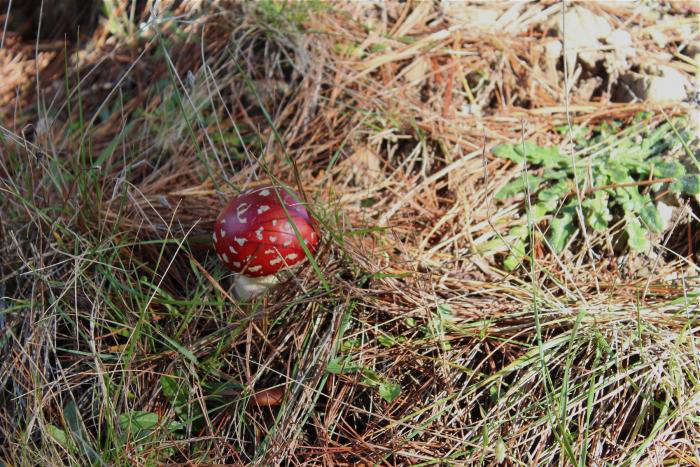 Above: We saw a toadstool — amanita muscaria, which the FDA says is poisonous–and stopped to admire it.

Are you a serious hiker (or camper)? See “Required Reading: Wilderness Route Finder.” 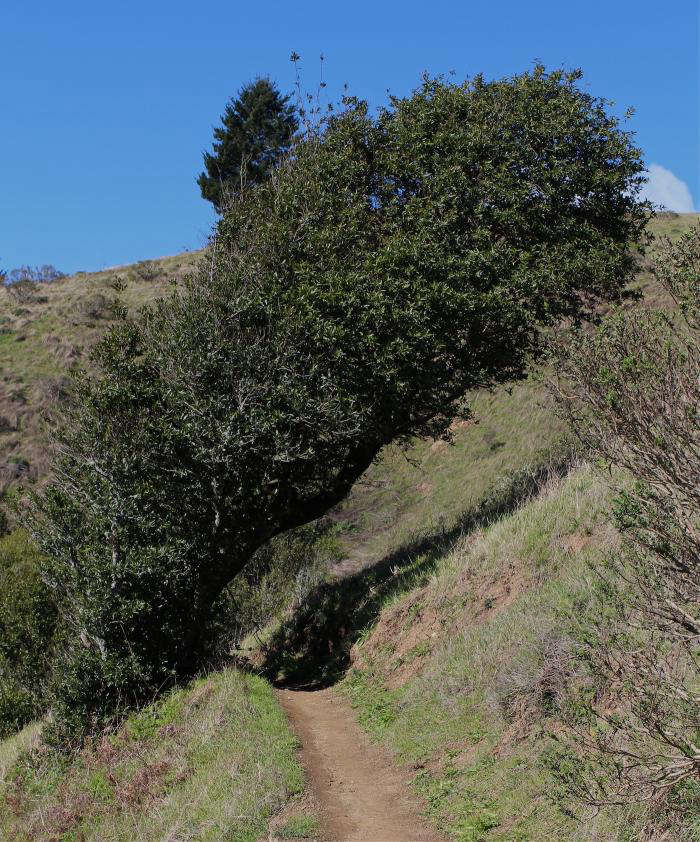 Above: A windblown tree grows over the trail. 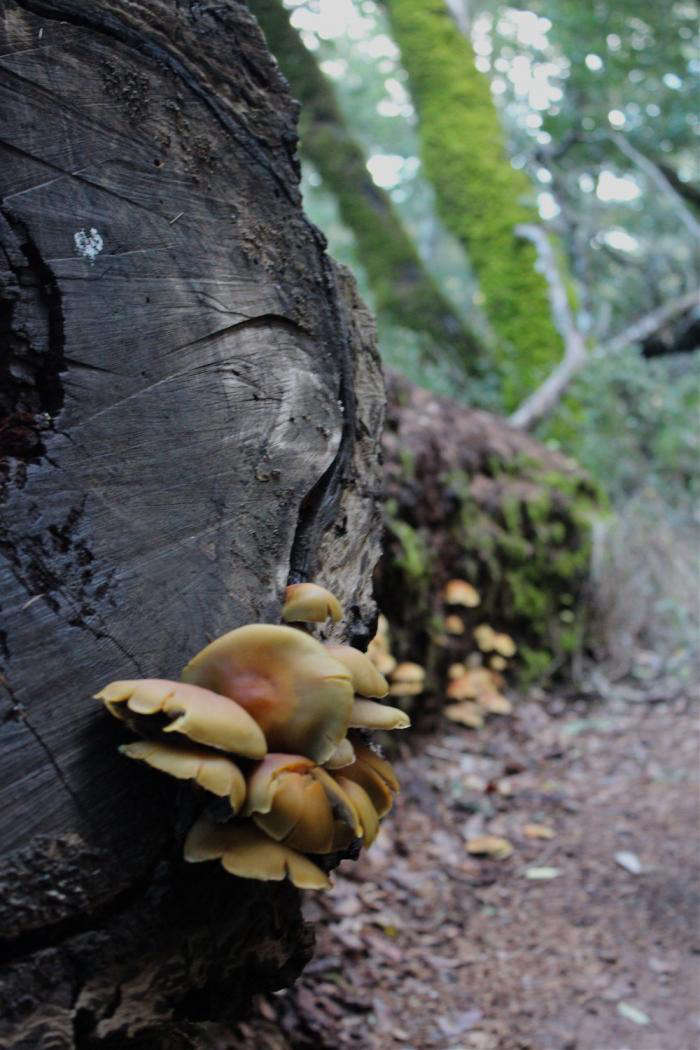 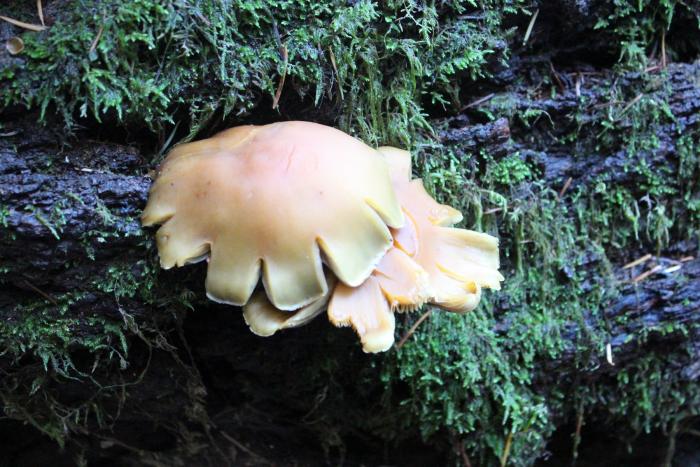 Above: The saturated colors along the trail were otherworldly — this is not Instagram magic. 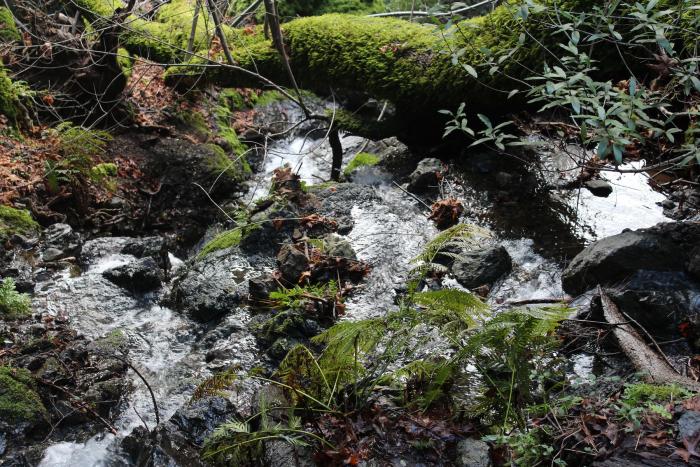 Above: Our route took us past the Mountain Home Inn and the Throckmorton Ridge Fire Station to the Matt Davis Trail, another of my favorites. The Matt Davis Trail takes you across lots of little wooden bridges above streams. In the rainy season, water rushes over the rocks. In the summer, it’s barely a trickle. A Mt Tam Trail Map for iPhone, iPod or iPad is $4.99 from iTunes. 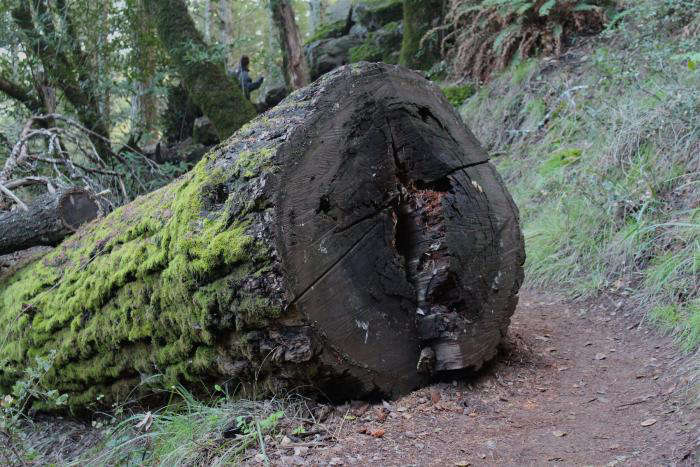 Above: A mossy tree trunk partially blocks the path. 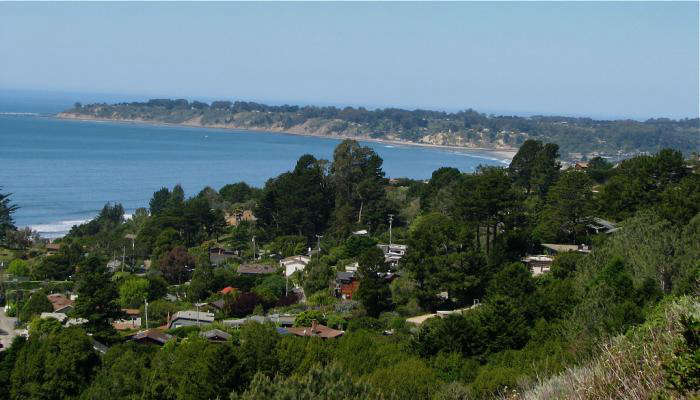 Above: A view of Stinson Beach and the ocean from the Matt Davis Trail. Photograph by Christina via Flickr. 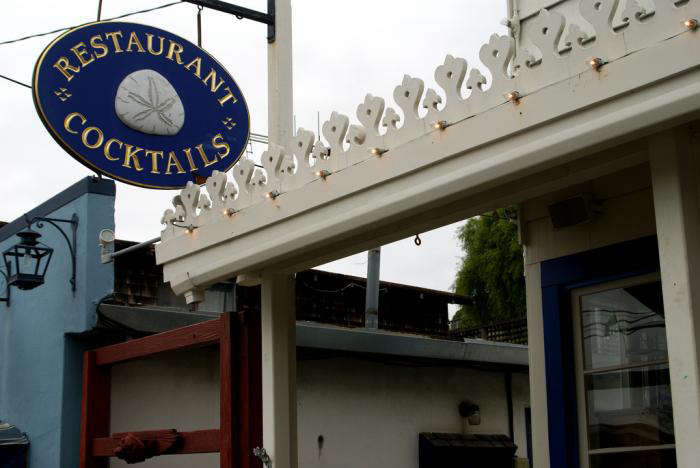 It took some of us longer than others to make it to the end. I caught up with everybody (including the contingent who, it turned out, had saved time by sliding down the hillside on their butts to avoid the last few hundred feet of switchback trails) on the porch at the Sand Dollar Restaurant in Stinson Beach. The sun was starting to set, about five and a half hours after we began the hike. Photograph by Clatiek via Flickr.