From the banks of the Nile to your backyard, gabion walls are a boon to the landscape. Used for thousands of years by military and structural engineers, gabions provide an attractive, effective, and inexpensive retaining-wall system. Read on to find out how to use this ancient technology in your garden: 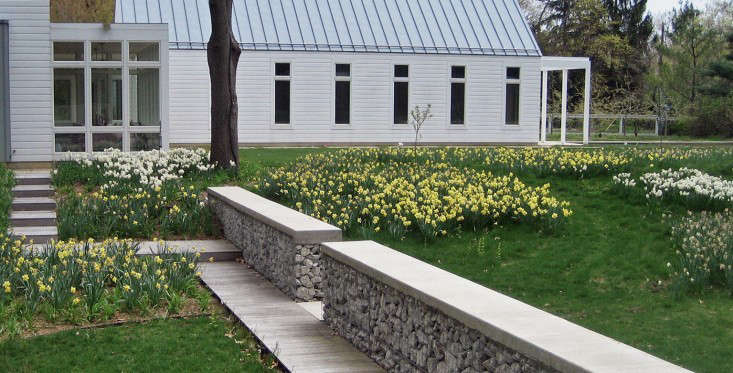 Derived from an old Italian word, gabbione, meaning “big cage,” gabions are enclosures that can be filled with any sort of inorganic material: rock, brick, or concrete debris. The cages were originally wicker, but now are usually a welded mesh made of sturdy galvanized, coated, or stainless steel wire that won’t bend when filled with rocks. In landscaping, gabion walls can support an earth wall, stabilize the soil, prevent erosion, and more. 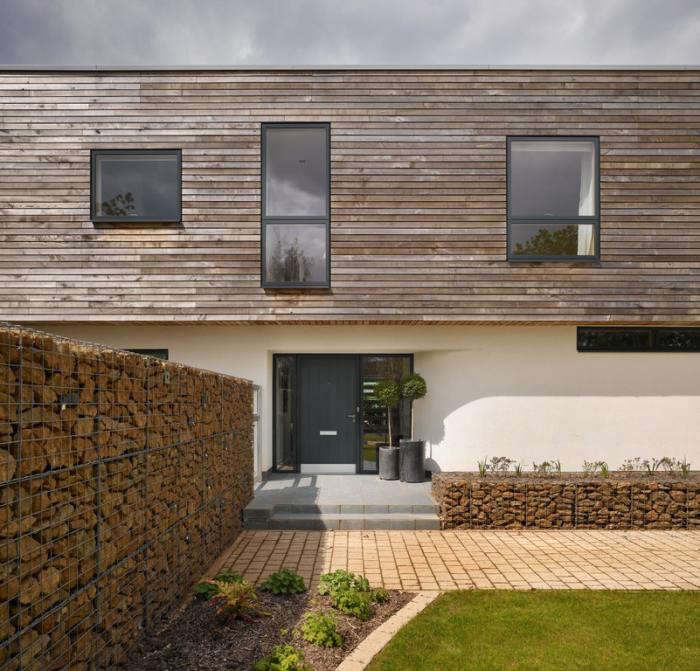 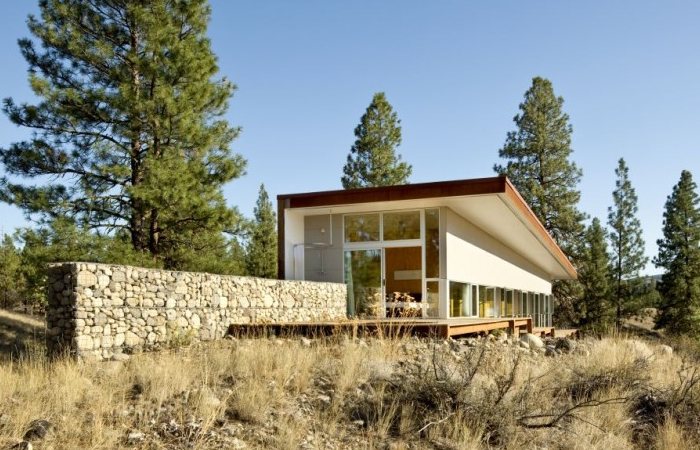 What is the history of gabion walls?

About 7,000 years ago, early gabion-type structures protected the banks of the Nile. In the medieval era, gabions were employed as military fortifications. Later they were used for structural purposes in architecture. Evidently, Leonardo da Vinci used gabion for the foundations of the San Marco Castle in Milan. In recent history, civil engineers have used gabions extensively to stabilize shorelines, riverbanks, highways, and slopes against erosion. 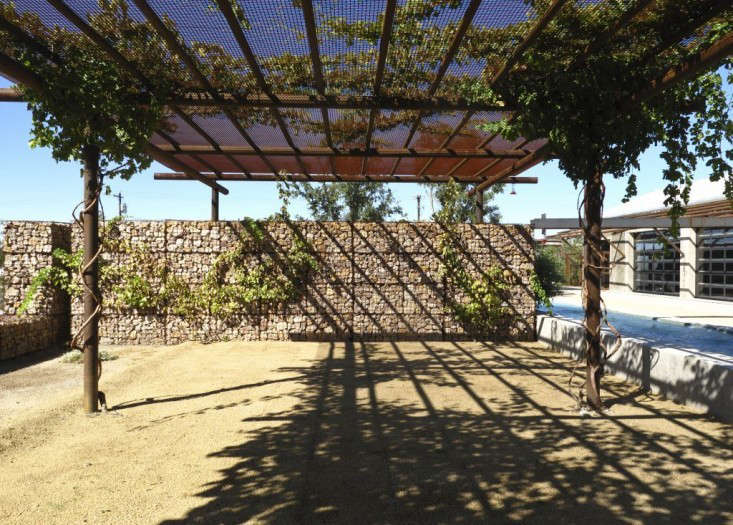 Above: “Using regional materials ties a new space into the culture of a place,” says landscape architect Christine Ten Eyck. She and her company transformed an abandoned parking lot into the Capri Lounge, a community gathering space for the Thunderbird Hotel in Marfa, Texas. Photograph by David Lake.

What are the benefits of gabion walls?

History has shown that gabions are a lasting solution to soil erosion. Other reasons to use them: 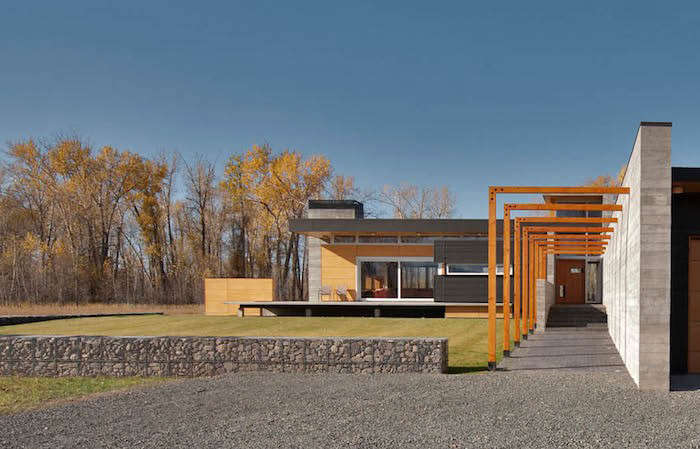 Above: In this residential project by LIVINGplaces Design Studio, “Gabions provided the opportunity to use an organic material (stone) that is contextual to the site’s geological history,” says Jonathan Blaseg, of Minneapolis landscape architects Coen & Partners. “The cage relates more directly to architecture and the acknowledgment of structure.” Photograph courtesy of Coen & Partners, a member of the Remodelista Architect and Design Directory. 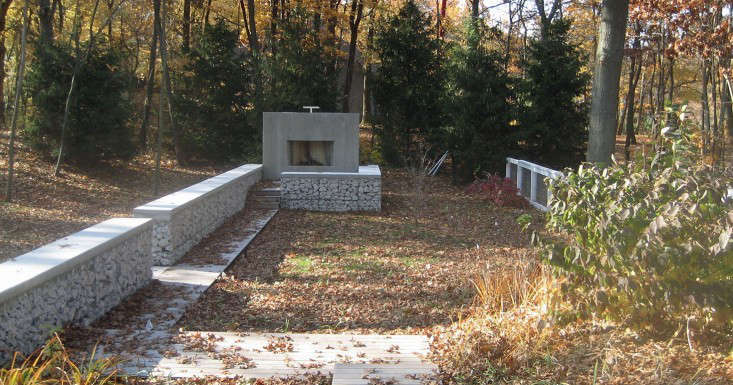 What material can you use to fill a gabion wall?

Rock is the most typical filler for its durability, longevity, and stability. Often the filler is chosen for its aesthetic attributes, or by what can be recycled from a site. Some considerations depend on a wall’s purpose. For a retaining wall, the rock must be dense enough to support the load. A hard rock such as basalt is typical.

N.B.: If you’re building a retaining wall, get a landscape architect or engineer to determine loads and stresses and other factors. 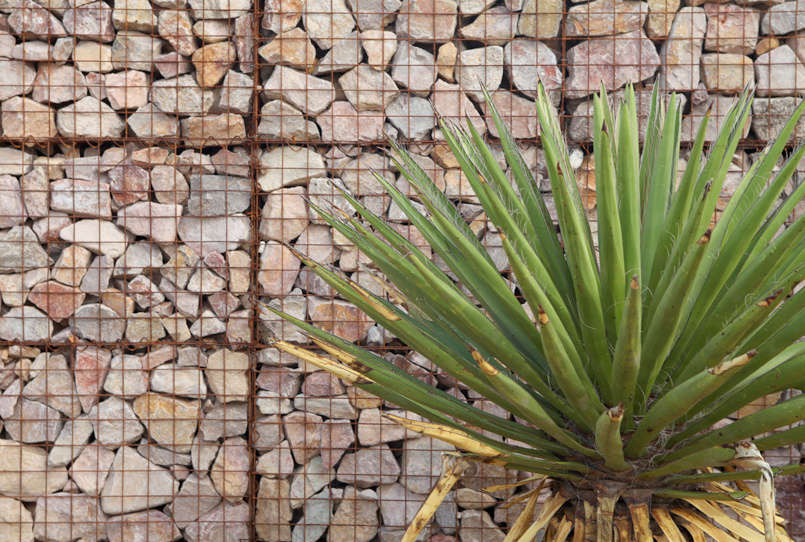 Any reason not to use gabion walls?

Gabion walls may come with one warning label: possible animal habitat. “Gabions can be nice hiding places for small critters,” says Ive Haugeland, principal at Shades of Green Landscape Architecture. “They’re good for wildlife habitat, but that needs to be OK with the people living there, too.”

Can I use gabions for more than just retaining walls? 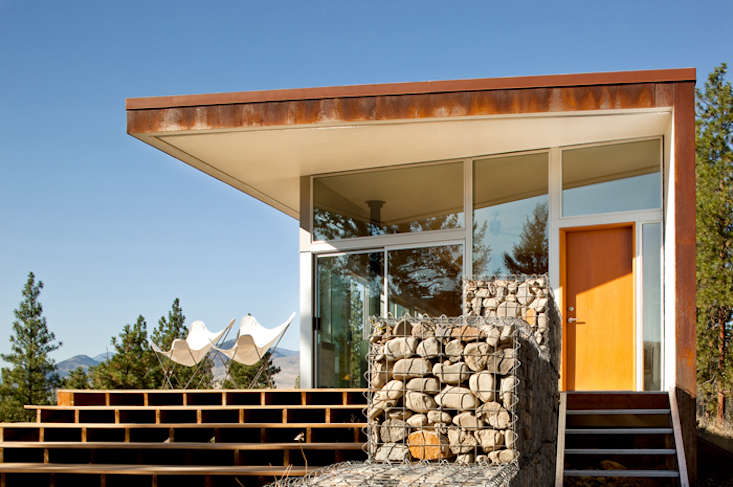 Above: Architect David Coleman’s Hill House uses gabion as a stair rail and visual divider between the entry stairs and the deck. Photograph by Lara Swimmer courtesy of David Coleman Architecture.

Note: Whenever gabion construction is used for fencing or screening, it needs the rigidity of a surrounding frame.

How much do gabions cost?

The price can vary widely, depending on:

Gabions: The cages are typically made of 3-inch mesh, which is sold in a range of sizes. According to Gabion Baskets, the industry standard is 3-foot increments. To estimate cost, figure on $35 per cubic yard (a 3-foot-square cage) for standard-gauge galvanized mesh. Gabion walls can be made in virtually any size (within structural limitations) for site-specific needs.

Filler: Here’s where you can exercise control over the price. Your filler could be expensive slate or free recycled concrete. For a large project, you often can find filler onsite.

Installation: Gabions are extremely affordable for a retaining wall or stone fencing, since little excavation or land preparation is needed. “It looks like the clients dropped hundreds and thousands of dollars,” says Kettelkamp, “but because they don’t require a foundation, it’s a very economical way to build a garden wall. The cost of labor is minimal compared to a traditional New England fieldstone wall.”

Above: In Kettelkamp & Kettelkamp’s Lake Michigan project, the gabion basket walls were built using standard stock panels of wire from Nashville Wire Products. “They sell big panels of wire and you wire them together to make baskets,” says Kettelkamp. “A compacted one-foot-thick layer of gravel is spread beneath the wire frames. Then you fill the baskets with whatever you want. We knew some concrete roads were being ripped up nearby, so we recycled the crushed concrete to fill the baskets.” To see more of this project, go to A Classic Lake Michigan Summer House by Kettelkamp & Kettelkamp.

Love the look but don’t need a wall? See Rebecca Cole’s Gabion Furniture for a simple way to use it in your outdoor space.

Secrets of an English Head Gardener: How to Transplant Shrubs and Perennials

Landscaping 101: How to Plant a Bare Root Hedge

Downsizing a House to Expand the Garden: At Home with Landscape Architect William Dangar

Your First Garden: 10 Things to Do in the Garden in December